Orion
The mighty hunter of ancient Greek legend. A figure immortalised in the famous constellation that bears his name. Most of us know the Orion constellation of the northern sky very well.
It's one of the easiest to recognise in the heavens. Since the main body is comprised of several bright stars. Including the easily spotted Rigel, and Betelgeuse.

Here is the constellation of Orion, with Barnard's Loop in the background. 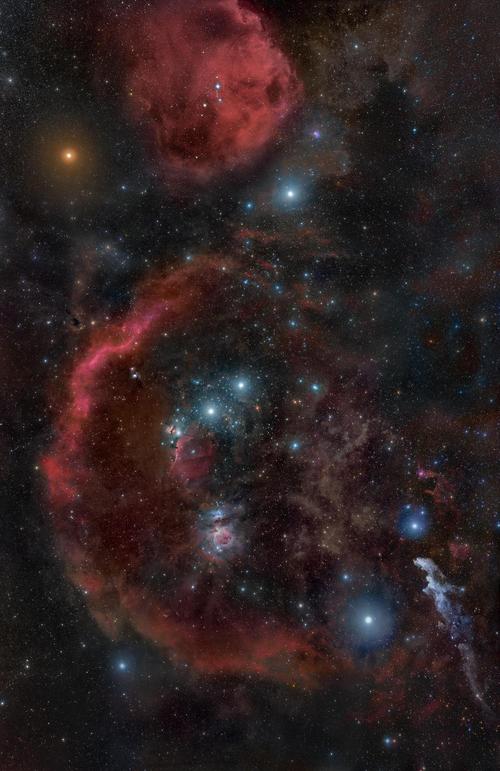 Aside from the constellation, Orion also lends its name to the Orion-Cygnus Arm of our galaxy. This in turn leads to a region where it collides with the Perseus Arm of the galaxy.
That place is known as the Orio-Persean Conflux or Orion-Perseus Conflux (depending if you're using the mapping terms of EDSM Galactic Maps or those of the Pilots Federation Mapping Service). The region is vast, and essentially under explored. Previous expeditions to the territory (like the Mercury 7 Expedition) have yielded a treasure trove of discoveries.
Although this may just be scratching the surface of possible new discoveries and further understanding of this region. Orion was also the name of a early 21st Century spacecraft, that was designed to take humans to the Earth's Moon and to Mars.

In light of the under explored nature of the region: it is the aim of the new Orion Expedition to shine the torch of discovery into this remote place in our galaxy.

On January 12th 3306 the Orion Expedition will depart the Betelgeuse star system (Orion's brightest star), to venture into the unknown and open a new chapter in discovery!
It will then explore the Orio-Persean Conflux, and finally come to a halt at Explorers Anchorage near Sagittarius A*, on April 26th 3306.

We welcome all Commanders of good will to join us on this journey.

The approximate route of the Orion Expedition 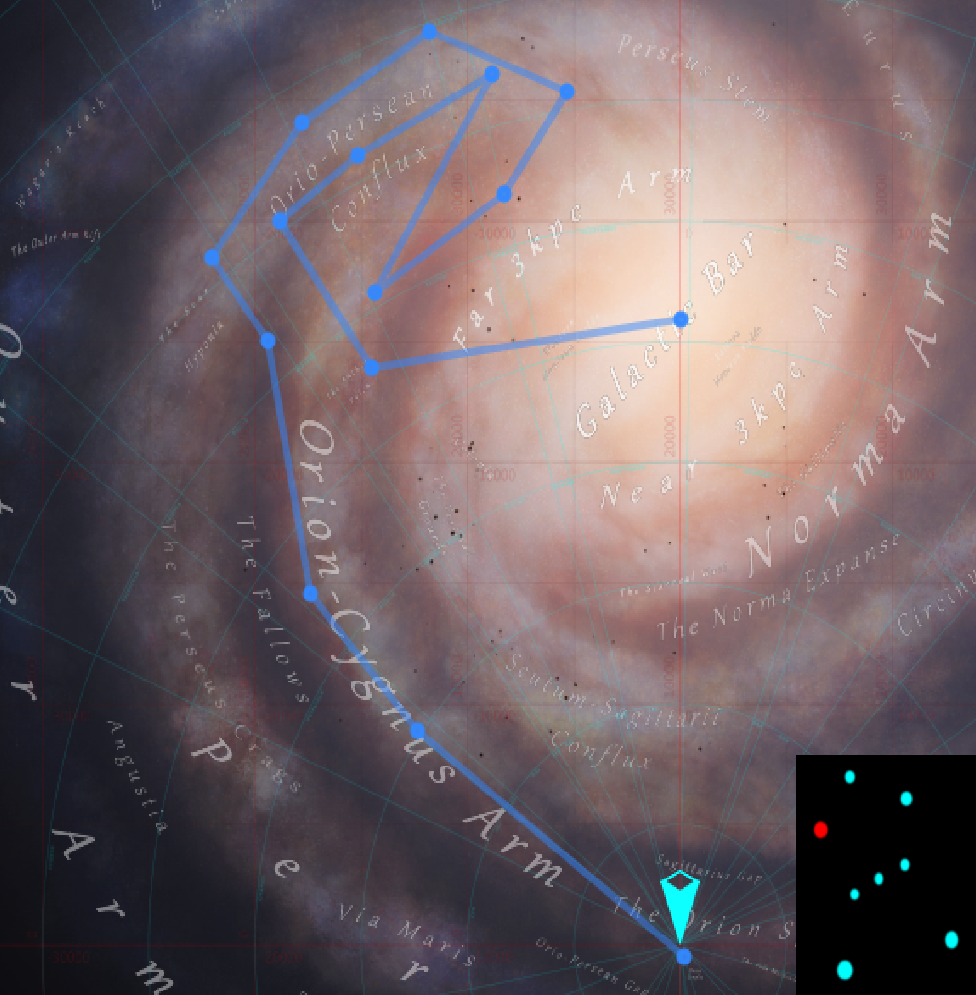 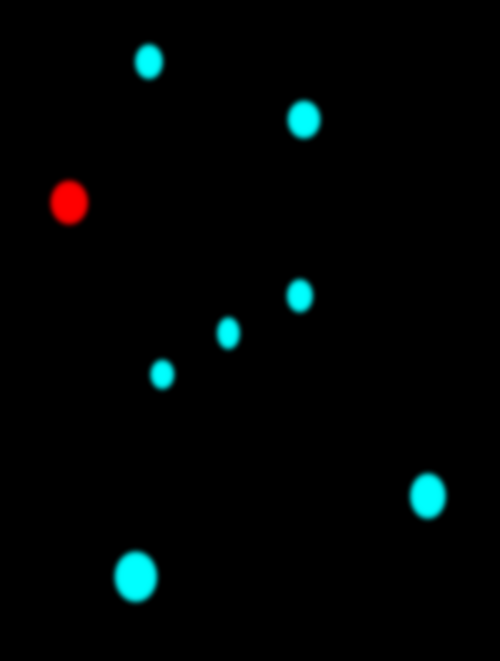 Hopefully this is what you're looking for in Elite: Dangerous exploration.
If so, sign up with us. And we will see you at Betelgeuse!

2) Join our Discord server. It is the expedition's means of communication - https://discord.gg/g7Z8bsd

3) If on PC sign up for the FleetComm Private group if you are not already a member - https://forums.frontier.co.uk/threads/announcing-fleetcomm-the-exploration-focused-private-pc-group.474455/

I might even join in... What is the projected distance per week?

May I add that this expedition is expected to meet up with the Perseus Reach Expedition? It will start a bit later and run through the Perseus Arm. I'm looking very forward to this

Very Interesting. I think in join in

Interesting tour. I'll keep an eye on it. Because this would be my first "mass"-expedtion, I have a few questions:
1. Is there a distance-minimum / -limit per week?
2. In wich game-mode does this expedition take place?
and the most important:
3. Where do I sign in?

R
Looks fun. Will keep an eye on it. Will be interesting to see how much participation there will be considering there will be 2 other large expeditions happening at the same time.

Eliza said:
Interesting tour. I'll keep an eye on it. Because this would be my first "mass"-expedtion, I have a few questions:
1. Is there a distance-minimum / -limit per week?
2. In wich game-mode does this expedition take place?
and the most important:
3. Where do I sign in?
Click to expand...

Hello CMDR.
1) It's about 7300ly per week on average.
2) In the FleetComm Private Group on PC. There will be separate PGs for Xbox and PS4 CMDRs.

Time to find adventure among the stars... 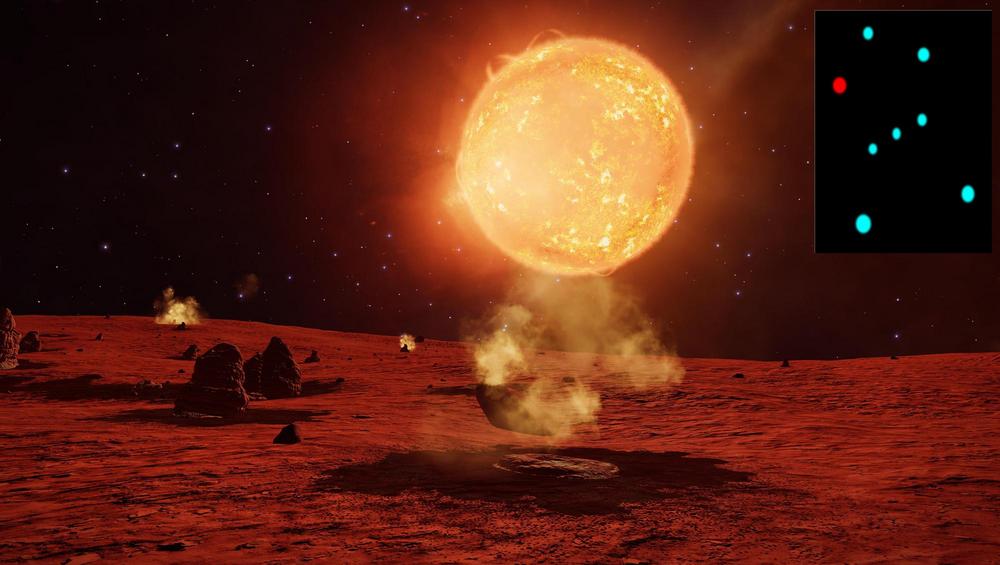 We now have the EDSM and Discord links up, so feel free to sign up!

Very much looking forward to this. Have a DBX outfitted and ready to go. Haven’t room in it for an AFMU. Have guardian jump enhancer though. I suppose there’s a pay off between how you outfit. Any tips?

There's always going to be trade offs when putting together a ship build. Personally I'd probably drop the Guardian FSD Booster, since the DBX already has an excellent jump range. The AFMU is something all explorers should carry with them.

Couple of questions on this expedition.

1) Are there going tot be weekly meetups and base camps.

Thanks Yanick. Ended up a further trade off....going in an Aspx now so I can fit in the AFMU and the Guardian Jump extender. I hope there's going to be meet ups, in a private dedicated group? Fleetcom, is that right? Will join right away! Still having fun tinkering with outfitting on Coriolis.io. Is fleetcom an in game private group? Thanks again to the organisers, see you all Sunday!
You must log in or register to reply here.
Share:
Facebook Twitter Reddit WhatsApp Email Link
Top Bottom