Out of Fuel? - Explorer Rescue Service, The Fuel Rats

Sometimes even a rat needs to be saved.

Heads up, the Magic-Drop -Your-Trousers ... no, Fuel bug is out there again (still?), after game crash following fuel+:
https://forums.frontier.co.uk/showthread.php/480649-Fuel-loss-during-fuel-transferring-with-game-crash

Uvelius Sång said:
Heads up, the Magic-Drop -Your-Trousers ... no, Fuel bug is out there again (still?), after game crash following fuel+:
https://forums.frontier.co.uk/showthread.php/480649-Fuel-loss-during-fuel-transferring-with-game-crash
Click to expand...

Ugh, I'll watch out for that, thanks!

Just want to share a nice (and so typical Elite) experience of me, an already long-term Rat-on-a-Holiday. By the way, if you have any stuff for The Fuel Rats Artists Collective, please let me know, I might be seldom seen Ratting these days but I am still dedicated!

I was out in my Dionaea Uvelii Lab 69 Python (a Thargoid bug squasher) in HIP 24046 when I met a fellow Rat (tell me if you want to be named. It would be a pleasure). Small universe indeed!
We loosely ate some Scouts for breakfast at the local AX Conflict zone, occasionally shooting random Decon Limpets at each other (you never get the Rat out of a Rat). When things calmed down a bit, we sided for some photoshooting and chatting.
For some reason, my fellow Rat loosened a random shot at me and became Wanted immediately. It wasn't a big deal since Sec was quite focused on bugs and not on him, but annoying it still was for him, I guess ...
So we chatted on. Don't nail the order of events on me from here on, but as far as I can recollect, he parted after a while of camping and taking down the occasional nosy scout to clear off that bounty. He already was quite far away, spooling up his FSD, when I felt a strange ... wave washing over my ship. Yet, nothing to see.
I hadn't even time to develop a really really bad feeling when my ship was disabled by the EMP wave of a huge Hydra ... which had spawned right on top of me.
the Swarm hammered on my poor Python, and the Hydra had fun using me for some target practice. Which looked like this: 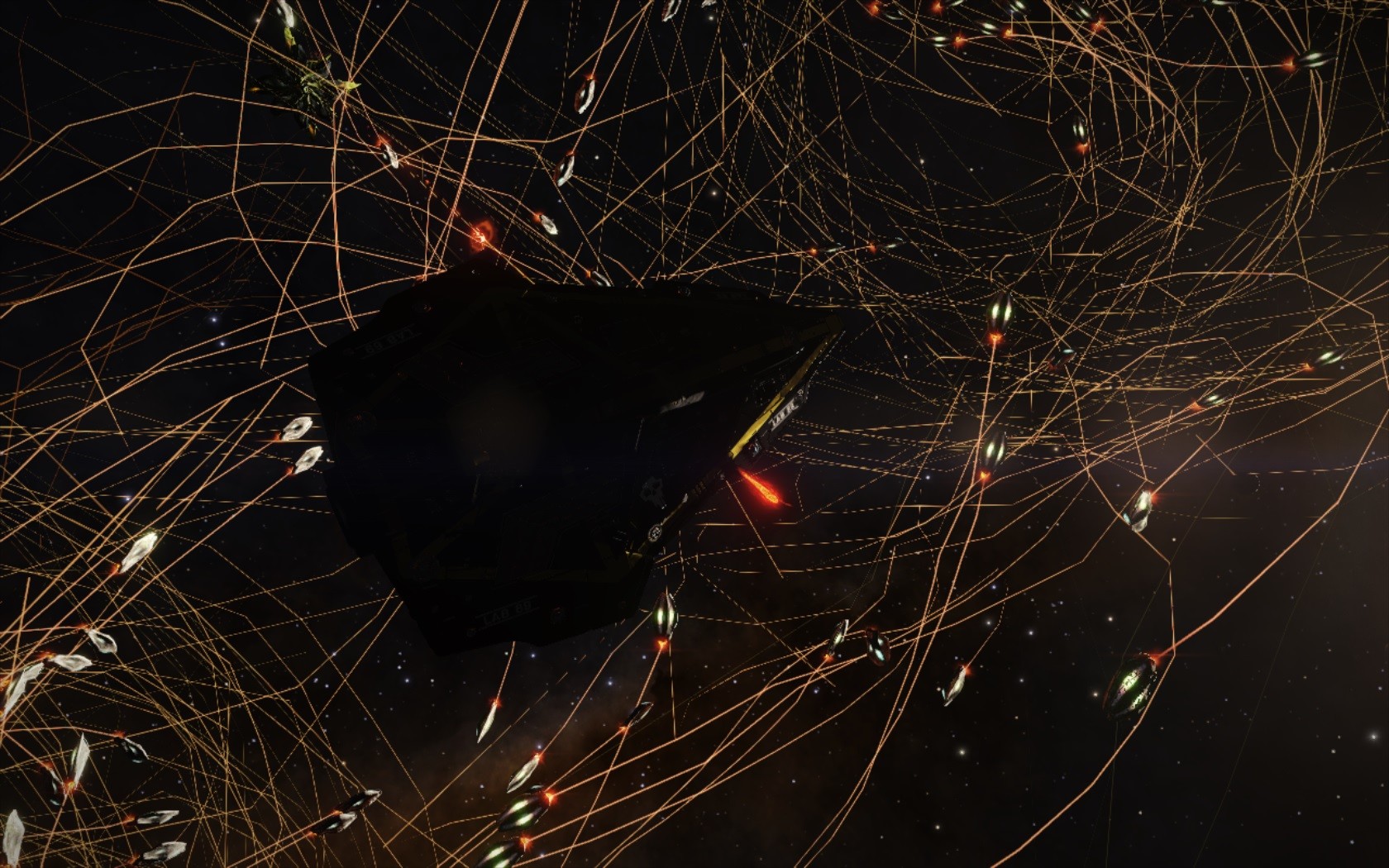 When my systems came back online, my shields where already depleted, most modules at zero percent including the Power Distributor -- no, no Boosting here, my friend. Nearly panicking -- Rats never panic, as long as no Snickers are involved -- I sent SOSses to my fellow Rat. But he had just entered Supercruise and was disabled in mid-jump by the blast.
Long story short, I made it out at 24% hull. Yet it was not over: My fellow Rat almost ran dry while on his way to clear that bounty.
"Running out of fuel after shooting at Uvelius, that would have been a line", he wrote, laughing.
And a bit later, when we happily hunted down more Scouts again, he became subject to a Hydra-on-top-spawn.

This was really some Rat holiday to tell stories from!
Last edited: Mar 20, 2019

For the 1st time in ~ 34 months of exploring I've managed to run out of fuel.
I dialed up the fuel rats. Issue resolved in under an hour.
They were very quick, patent and helpful.
Special thanks to CMDR Aileana! (I don't see her listed on the rats leader-board?)
Wonderful service.
I plan on $ support but is there going to be apparel available for US players?

So, we made it into the big league. Der Spiegel!

TartanDragon said:
An orange Cobra Mk. III..... Wonder who that is?

Big article about the fuel rats in one of Germany largest news outlets: http://spon.de/afrF8 Congrats

D
So i'd like to know why I was banned from the fuel rats after a stupid, simple little joke for April fools day?? You were not busy, the chat was straight dead, and I used a fake name and system. Also, The name used was that of someone who ACTUALLY DID spam us. I just re-entered it. Id like to speak with the owner or someone with some brains maybe because obviously the person who banned me has absolutely none and cant take a joke. Thank you very much!!

Daredthunder967 said:
So i'd like to know why I was banned from the fuel rats after a stupid, simple little joke for April fools day?? You were not busy, the chat was straight dead, and I used a fake name and system. Also, The name used was that of someone who ACTUALLY DID spam us. I just re-entered it. Id like to speak with the owner or someone with some brains maybe because obviously the person who banned me has absolutely none and cant take a joke. Thank you very much!!
Click to expand...

Hello, you were informed about the reasons for your ban by an email to your registered account yesterday, the terms of service you checked "I have read and agreed" to when you created your account explicitly forbids what you did. We do not generally discuss bans in places like this, but you are welcome to send a ban appeal by email to ops@fuelrats.com

P.S: Insulting members of our moderator team is generally not a conducive way to reduce your ban.

Speaking of which, has anyone seen my brain? If someone took it, not funny!

Sorry, but I'm keeping it - kids needed a new football.

Wow, that's awesome with Der Spiegel indeed. And quite a good article, considering what could have been written. BTW there was one in a smaller German newspaper in 2016. Don't know of other articles in non-gamer/it magazines, though.

... aaaaah ... I think I'll have to log in and rat a bit during lunchbreak. Long time no see ... I need to develop some "short-time-more-often" rat routine.

As for Daredthunder - style bans ... I'd speak up for a second chance after a while of introspection in the Bad Rat Bin (and sparing the "brain" part). Mischief does mischief, eh? It's even in our second name ...
So xlexious' Ban Appeal option seems quite a good idea in my view.
A slap over the paw and get on with it. Squeak.
Last edited: Apr 9, 2019

K
any chance to add the fuel rats to our ships nav panel so we can call in times of need?

We're a non-official group, so a button specifically for the Fuel Rats would be seen as favouritism; why not a button for Iridium Wing? or East India Company when you need something to unlock an engineer; or even a button to summon a pirate/gank?

The last point is another issue, how would vetting help work? You'd get griefers dialling a rat, and hoping to blow us up. So would there be checks on who's calling, are they in a wing, their wanted level, etc

It's been discussed before, and same issues haven't been resolved.
Best bet would be an official SDK/API toolset, that allowed 3rd parties to build add-ins CMDRs could choose to download into their cockpit (GUI/menus). Then you could choose to add a Fuel Rat built button straight to our irc (with our usual checks), or EDDB straight to the cockpit, or Spansh for neutron plotting.

Sadly FDev have never said more on an API, so almost zero chance there either. Maybe come 2020...

C
Ty very much to the team of Fuel Rats for their assistance tonight (i´m Cmdr Darthniell).

It was my first time i went out of fuel xD but they came very quickly in my help! The web its simple and useful, (they have fuel, and you not, i like the idea xD), and the chat have a lot of instructions, easy to follow and with translation to your language. I recommend to everyone to keep in mind their help next time you are engineering you Fer-de-Lance and his "fuel-teacup" went empty xD
You must log in or register to reply here.
Share:
Facebook Twitter Reddit WhatsApp Email Link
Top Bottom