Our Planet Zoo Beta is now live for you to enjoy! 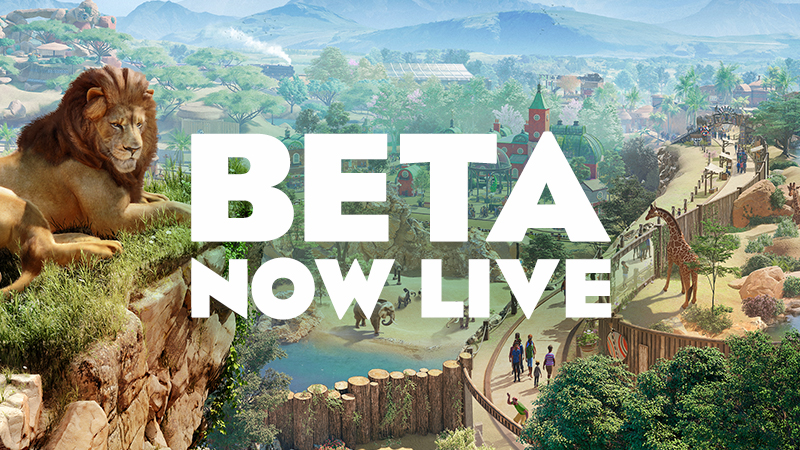 Our Beta is not the full Planet Zoo experience, but rather a focused selection of game content to let you have a taste of what's to come! If you'd like to know exactly what will and what will not be available during the Planet Zoo Beta, please read our post here. Additionally, your dedicated Community Team is around to answer any other questions you might have!

You may encounter the odd bug or issue from time to time, as this is not the final game build of Planet Zoo. If you experience any problems, please report via our Issue Tracker so that our teams can investigate as soon as possible! We're also really interested in your gameplay experiences and feedback, so please share any thoughts via our brand new, dedicated Beta Feedback forum. You'll be helping us a lot by leaving us your constructive comments, as we aim to bring you the most fun, final experience on 5 November!

The build you are about to enjoy is a Beta game build, so it’s not the final version of the game that you will be playing on 5 November. This means there may be a few issues or bugs you encounter which we’d like you to report to us via the Issue Tracker here.

We are also aware of some potential framerate issues you might encounter. Our developers are working incredibly hard to optimise the game’s performance, but you may experience some issues at the start of the Beta. Please know that we are working on this and we’ll keep you updated on further improvements. Again, this is not indicative of the final build in November.

As you will be playing the Beta build of the game, there are a few Known Issues you may run in to. You don't need to highlight these to us as we're already on the case!

General
Scenario/Career Mode
Franchise Mode
Animals
People
Building
UI related
You are free to stream and share content of your Planet Zoo Beta experience, and we look forward to seeing the magnificent zoos you create! Be sure to keep checking our forums and social pages for some exciting Beta activities you can participate in - there's some great prizes to win as well!

We hope you enjoy it,

Yay, have fun everyone!

Frontier
Can't wait to see the zoos you all create!

Oh dear, I've already got a pretty big issue. I can't seem to load into the first Career mission, my game crashes within 2 seconds of loading

TheWetDolphin said:
Oh dear, I've already got a pretty big issue. I can't seem to load into the first Career mission, my game crashes within 2 seconds of loading
Click to expand...

We're aware of some crash reports but if you encounter any issues please report them via the Issue Tracker so our team can get on it as soon as possible.

Paul_Crowther said:
We're aware of some crash reports but if you encounter any issues please report them via the Issue Tracker so our team can get on it as soon as possible.
Click to expand...

Already done, thanks Paul!
Just a quick question, does fullscreen mode not exist in the Beta? I can only see Borderless and Windowed mode in my game.

Downloading - once I remembered to claim my Steam key from the store (having purchased on the store).

.... and although I was meant to be mining tonight to boost funds for my Carrier, I'll not be doing that tonight...

Frontier
If you have pre-ordered the Deluxe Edition via the Frontier Store and it is not listed in your Steam library then please reach out to our support team here.

I cannot BELIEVE how well this runs AND looks on my poor a** laptop. I am utterly amazed. Fan-fricking-tastic, amazing work!

J
Not showing up yet on Steam and yes have checked Steam Client. What now? Grrrrrr

C
Hey all, so an issue I'm seeing, and that I'm seeing reported by streamers, on Reddit, etc, seems pretty bad... In Franchise Mode, you can build a trade center and bring in Exhibit Animals, but the large Habitat Animals aren't showing up at all. The screen is totally blank. I filed a bug report but since it seems universal I wanted to see if this was a known issue, or if we're all missing something.

Frontier
Thanks for the feedback. Any other issues or bugs please report via our Issue Tracker so our team can check them out https://issues.frontierstore.net

The framerate is better than I expected but yeah it needs some tweaks since there are freezes every now and then.
Last edited: Sep 24, 2019

M
Hello, I'm playing on ultra settings but the textures are low. Is there any high texture resolution pack or am I missing something?

Frontier
Does your graphics card meet the system requirements and are the drivers fully updated? If yes, please report this to our investigation team here.

HURRAH!
I've just got home from work, so I'm about to download. I can't wait to get stuck in

N
I, too, seem to be experiencing the crash when trying to load Career Mode. I have submitted the problem on the issue tracker twice so hopefully it will be fixed soon - haven't yet attempted Franchise Mode.

I did wonder if it could have been because my laptop is so full of junk. I uninstalled a bunch of games I no longer play (including The Sims 4, by far the biggest lot) to try and resolve the issue but to no avail. Hopefully Franchise Mode will work for me so I can at least play something.

I'll be devastated if this is an issue with my computer and not the game itself. I've been looking forward to this game desperately since it was announced.

Edit: Franchise Mode loaded but very slow and choppy even on lowest graphics settings (this may be due to my computer of course - I'm just glad it loaded). Oh, I also can't seem to actually exit the game because the save fails and there's no option to not save and just exit (I haven't actually done anything worth saving). Rather than exiting without saving it just won't let me exit.
Last edited: Sep 24, 2019

J
Pretty rough when it comes to performance and frame rate, but since that's been announced as something that the team is working on, I'm not panicking yet. To me it does seem more like a real beta (testing phase) than with Planet Coaster.

I do notice a dinstinctive lag on the animation on certain animals, like they move through some sort of waze (so far the tiger, lion and lemurs). I'll use the Issue Tracker once I've really noticed some problems.