The Alliance plans to construct several new outposts in the Coalsack Nebula. From these, commercial and scientific operations will be conducted to locate fresh sources of meta-alloys and other potential sites of interest.​
​
The initiative was prompted by the findings of a planetary survey team two hundred years ago, which were only discovered after an abandoned megaship arrived in the Chukchan system.​
​
The Alliance Expeditionary Pact's initial plans are to build Betancourt Base starport in Musca Dark Region PJ-P B6-1 and three further outposts: Hannu Arena in Musca Dark Region IM-V C2-24, Cole Point in Coalsack Sector VU-0 B6-6 and Bering Port in Coalsack Sector KN-S B4-9.​
​
Shipments of power generators, robotics, structural regulators and building fabricators are required, and can be delivered to the megaship Spirit of Nysa in the Musca Dark Region PJ-P b6-1 system. The more commodities that are supplied, the more outposts will be upgraded to starports and the greater the range of services they will offer. Should everything go to plan, they will be in place for the 26 of November 3306.​
​
Commodore Morag Halloran of the Alliance Defence Force discussed security arrangements:​

We anticipate a heavy Thargoid presence within the Coalsack Nebula. Therefore it is a strategic necessity that we act now to curtail the threat to future exploration
Independent pilots and anti-xeno squadrons can serve the Alliance by focusing their efforts on the Coalsack Sector KN-S b4-9, Coalsack Sector VU-O b6-6, Musca Dark Region IM-V c2-24 and Musca Dark Region PJ-P b6-1 systems, which will host the new structures.
Click to expand...

If successful, Sirius Atmospherics in conjunction with the Sirius Corporation is offering the top 25% of pilots a fully engineered long range fast boot, size 5 FSD which will be placed in storage in the Spirit of Nysa by the 21st of November 3306.​
​
To earn rewards, you must sign up as an active participant before handing in combat bonds at Spirit of Nysa in the Musca Dark Region PJ-P b6-1 system. Only combat bonds handed in after signing up will count toward your personal contribution total.​
​
Please note that if you have any crew members, a portion of your combat bonds will be automatically assigned to them. These combat bonds will not count towards your personal contribution total, and your crew will receive the reward for their bonds when they are handed in. The proportion of combat bonds assigned to your crew will depend on their rank.​
​
Be aware that faction-state changes and other disruptive events can negatively impact markets and station services, and could prevent the initiative from running smoothly.​
​
Notes:
Latest status
Last updated: 16 November 12:000 UTC -reached Tier 5
CG threshold tracking

Any AX Conflict Zones are up yet?

All the AX carriers will Park in nearby systems and not the haulage target system, yes?

Speedcuffs said:
All the AX carriers will Park in nearby systems and not the haulage target system, yes?

I am in the sysytem and see no AX signals

Boni58 said:
I am in the sysytem and see no AX signals
Click to expand...

As with the previous AX combat CG , you most likely can farm bonds everywhere and just travel later to Coalsack to deliver them.

EDIT: Yep, some one already contributed 43mil so it is pretty much confirmation.
Last edited: Nov 12, 2020

I have problems to find Coalsack Sector VU-0 B6-6, what the text described. Any help welcome!

Oh I look forward to both of these! Going to fill up my Carrier with the requested goods then ship out and deliver. When that is done, spend the rest of the day fighting Thargoids! Nice combo Fdev!

Kryxix said:
I have problems to find Coalsack Sector VU-0 B6-6, what the text described. Any help welcome!
Click to expand...

Also, for those flying their ships up... HIP 74290 offers a nice close spot to transfer your ship to just 180LY out from the coalsack.

There are, I found 80+ within range threat level 3-8. If you have problems try a relog from desktop.
Be warned: Orange Sidewinders are present.

I hear reports of attacked megaships appearing, must be Thargoids around somewhere

I hear reports of attacked megaships appearing, must be Thargoids around somewhere

Kryxix said:
There are, I found 80+ within range threat level 3-8. If you have problems try a relog from desktop.
Be warned: Orange Sidewinders are present.
Click to expand...

On a side note from an earlier post, As a citizen of the Alliance, I do support this, however I hope we arent kicking a huge hornets nest of Thargoid by claiming Coalsack as Alliance territory. Be Vigilant.

OK, just spotted one damaged megaship in Coalsack Sector VU-O b6-6... still no sign of NHSS though. Already quit to desktop twice now.

I dont know why, I found these systems just crawling with NHSSs....
Do you need screenshots?

Kryxix said:
I dont know why, I found these systems just crawling with NHSSs....
Do you need screenshots?
Click to expand...

No I believe you... but there's literally nothing there for me. 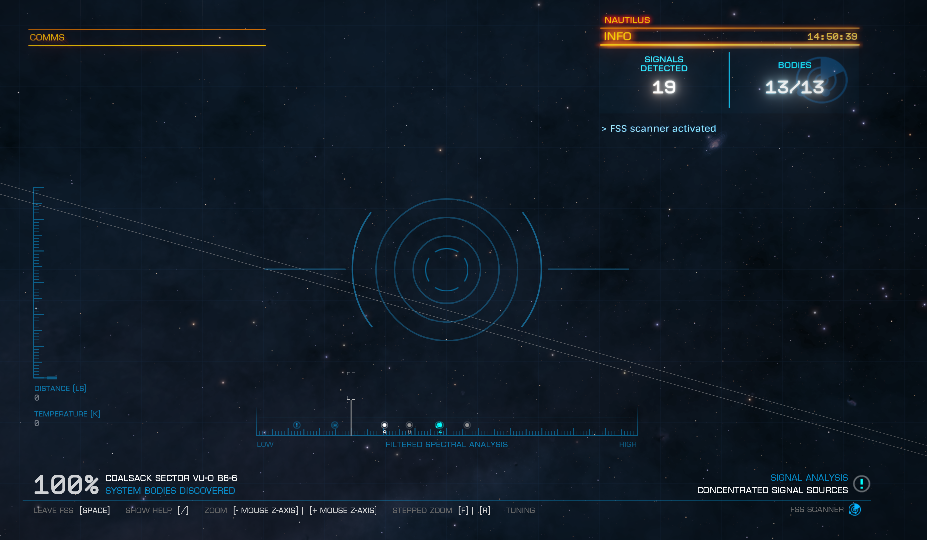