Report of a lost battle - Fight of titans in Votaroi

T
What a stupid name, commander Twistedcat. I had to make that bet. Anyway, today was goind to be an epic day. Or so I thought.

A few weeks ago, my vulture was finally equipped with these sweet 5A thrusters and I was just back from The jet's hole where Hera Tani pimped up that ridiculously small power plant. After a few light years of travel I had decided to stay in the maiku system, the austin station had affordable housing and docking price which I quickly found an explanation for after walking in its stinky metallic streets. Barely edible food, sheets almost rotting, yes rotting, right on the bed.

Anyway I had to start somewhere and for now, this had to do. At night I was hanging around the cleanest pubs and clubs I could find, this is were you can find the rare commanding officers that would deign, after a few drinks, talk to a lowly serf like me. And the emperor forbid they learn I was an outsider, the dirt of the dirt in the empire hierarchy, just a few days ago. I was raised in the family of an navy man, even though he was never at home, he managed to pass on his love for the empire. Maybe the only thing worth remembering of my childhood. And now that I had my wings, I was determined to serve and fight in the imperial navy. Honour and bravery, the true values of a life worth living.

I began by taking a few courier jobs for the Stroopwaffen corporation which owned the station and seemed to be under empire regulation. And it paid off, after working my off as an errand boy, I got the occasion to prove my worth : assassinate a deserter and upon succeeding, maybe ascend in rank. That's how I became master and just a few days later, Squire. This also gave me the opportunity to develop a trusted relationship with The vice president of stroopwafen corp, Daria Gilliam. Both the honours of the navy and the money from my side missions for Daria began to flow. Failure was not an option and did not happen. I was running from systems to systems, lasers blasing in space and on land, decimating pirates, treacherous deserters, illegal sneaky skimmers and other stingers. I was bright, I was good, I was ascending quickly and I felt unstoppable. That is why this morning, when Daria approached me with a spec-ops mission and a 9 millions credit check to not ask question, I did not think twice. My ego was big enough that I really thought my skills deserved that kind of pay. This morning was another step toward my growing fame. This day was going to be yet another magnificent day in my new life. It wasn't.

The details of the mission were to be disclosed only when arriving on site. After a coffee in reg's tavern, maybe the dirtiest dump of this godforsaken quadrant but with the advantage of being right in front of my ship's hangar, I boarded my vulture and read my mission order while doing my pre-flight check. Direction : Votaroi. Nearby system, perfect, this ship is a good fighter but a bathtub probably has a better jump range. Once on site, I received further instructions : Hunt and kill Votaroi PLC military ships. What they did to deserve that was not my problem, I was holding their death sentence in one hand and my money in the other. I started by looking up a few signal sources, without any luck. I decided to move to resources extraction sites where I could easily find the scum of this universe trying to steal some poor miner's cargo.

On my way to the asteroid belt where I hoped to find such a place, my sensors signalled me heavy fires not far from where I was : High intensity conflict zone. This could be a good place to start with, let's jump here. Although the vulture might be a bit lightweight for that kind of fire-power, I was confident I could handle myself. I go right at the conflict zone and drop out of super cruise, boost out of the way of what seemed on the moment to be hundreds of ships firing lasers, missiles, cannons and whatnot in every possible direction. Corvettes, clippers, anacondas ? Maybe I was a bit in over my head here. I didn't even have the time to check who was fighting who that an alert blasted in my cockpit : "CAPITAL SIGNATURE DETECTED" . 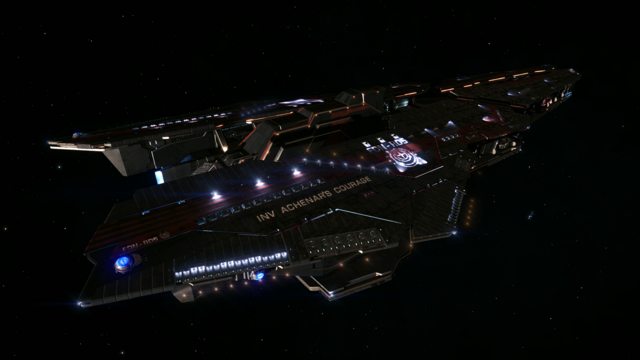 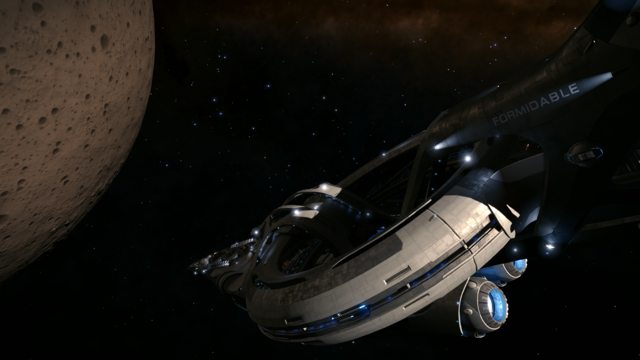 "What the...." and there I saw it. I think from this moment on my jaw stayed stuck to my knees for a solid 30 seconds : A huge black fog was appearing in a crash of thunders. Thunder in space ? But that was really not my major concern since the nose a monstrous ship was beginning to appear from the deep dark cloud. I had heard rumours and legend about capital ships : ships so big you could fit a city in it. Ship so big they mass lock you just like a planet would. 2 km long ? yeah sure buddy, maybe go easy on that azure milk. Well here it was, sliding through its portal, never ending apparition of deafening creaking metal and blasting lasers, the majestic wrath of the imperial navy descending upon its foolish enemies. The Formidable, a majestic class capital ship from the imperial navy, its name painted in 50m tall letters along its glorious hull. 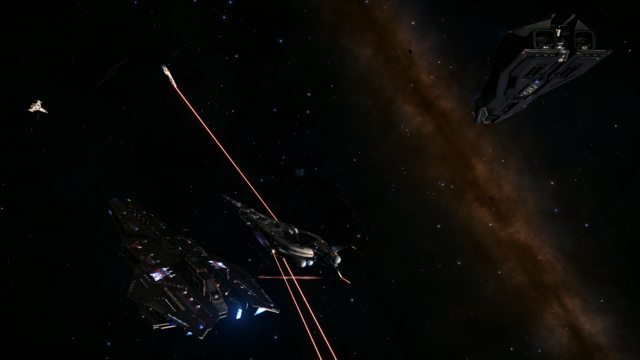 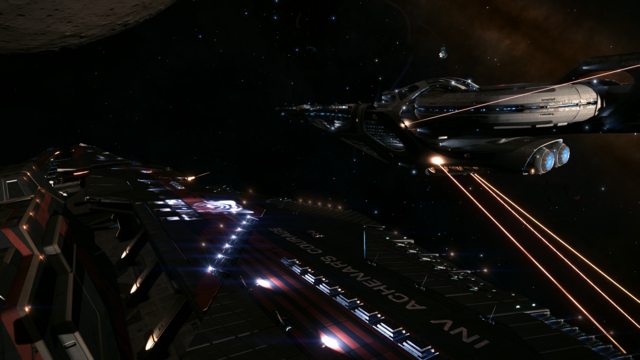 Just when I was comforted in the fact that the navy was indeed the most powerful, irresistible armed force of the galaxy, I realised that another capital ship had join the battle at the same time : the INV Achenar's courage, a farragut battle cruiser from the federation was already opening fire on the Formidable. And here I was, the "great" navy officer, unbreakable force of this universe...what a joke, sitting here totally powerless, watching this battle of two giant right in front of me, absolutely conscious of my total insignificance right here, right now, in this battle I did not even know was taking place a moment ago. I realized that some commanders, both from the navy and from the federation, were still taking their chance and trying to weight in the battle. I admire their tenacity, their bravery in front of what seemed to be both an immovable object and an unstoppable force. What an idiot I was, how could I imagine I ever was of any relevance in this war ? And as the realisation of my meaninglessness was starting to sink in, the bitter taste of despair invaded me when I saw the majestic imperial cruiser stop all weapons. What was happening ? How was this possible, the best ship of the navy fleet defeated ? And yet here it was, sitting dead in space, awaiting for its fate.

In an almost unconscious state, I decided this splendid ship was not going to go without honour. I landed on its deck, just in front of the command centre, and fired my chaffs as an ultimate firework to celebrate its life and death. 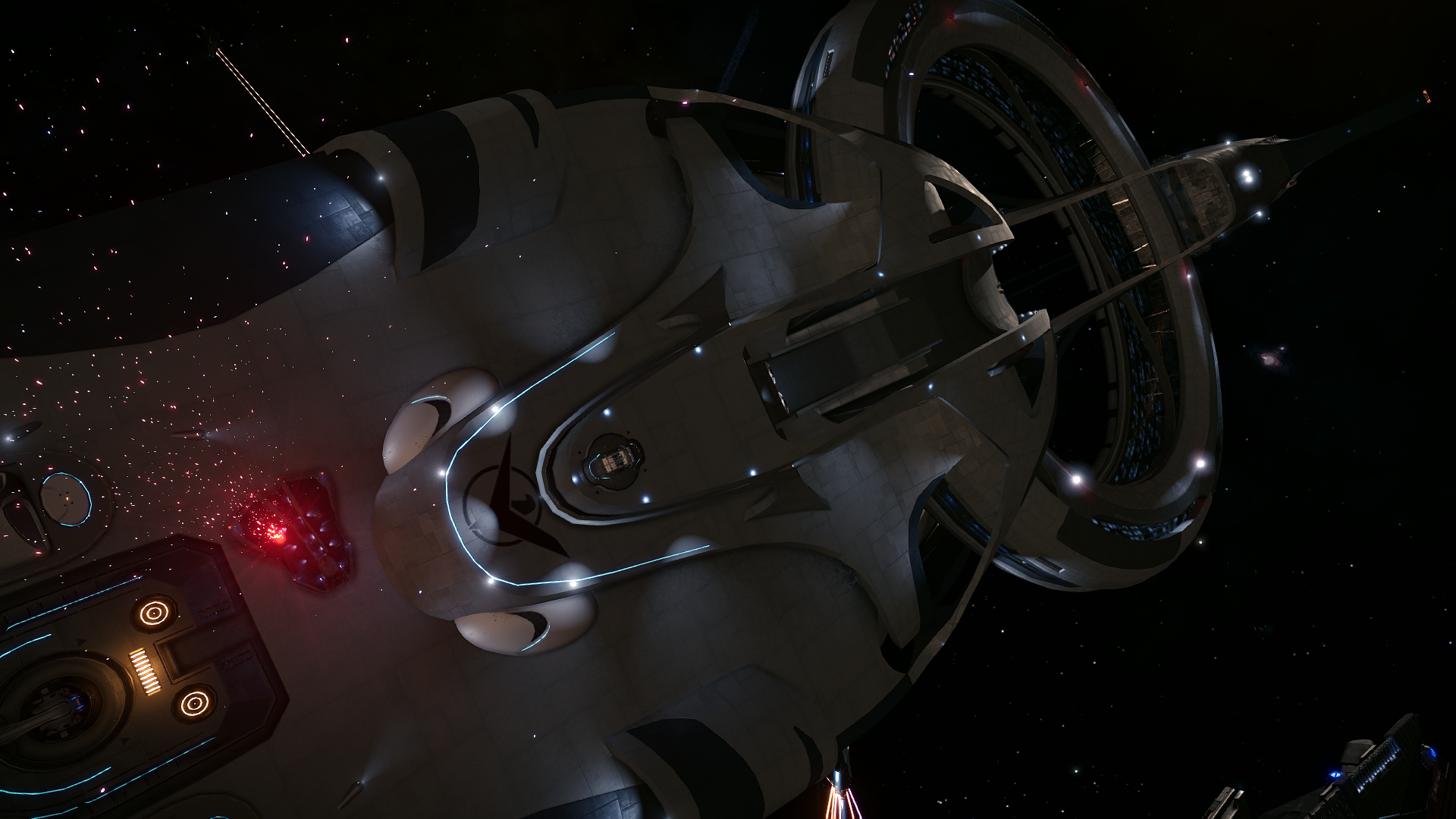