Introduction
Like many people I have found it hard starting with a blank canvas in Planet Zoo and often struggle to build further than an entrance and a couple of exhibits. I had considered recreating a local zoo which for me this would be Edinburgh Zoo, however, as this was already being done, I opted for something different. Since November 2021 I have been working on recreating Glasgow Zoo in its mid-2000's derelict state. Once complete I will then aim to “revive” the zoo by restoring and modernising its old unfit for purpose habitats and damaged buildings.

Background of Glasgow Zoo
Glasgow Zoo was founded by the Zoological Society of Glasgow and the West of Scotland in 1947 on a 99-acre site on the grounds of the former Calderpark Estate. The land the zoo sat on was initially purchased in 1938 however, the onset of World War 2 delayed its opening. The Zoos construction began as Scotland was recovering from the war and as such many of the zoo’s buildings were made from old war materials, for example some of the zoo enclosures were built with concrete roadblocks which were designed to hinder the movements of tanks, bricks from demolished air raid shelters, and metal from battleships.

During the zoo’s peak years, it amassed over 600 animals including the likes of Lions, Elephants, Rhinos and Polar Bears which attracted 140,000 visitors per year. The Zoo also contained a large number of birds, amphibians and farmland animals.

In the late 1990’s the Zoo fell on tough times due to decreasing revenue and public funding along with being unable to compete with Edinburgh Zoo. Annual visitors to the zoo fell to around 40,000 per year and in a bid to avoid bankruptcy the Zoo tried to sell excess land and animals. The final years of the zoo were shrouded in controversy with various concerns surrounding animal welfare and the condition of the Zoo. In 2003 with accumulated debts of £3.5M the Zoo was unable to renew its zookeeper licence, having been unable to meet new standards on animal welfare and subsequently closed. Following the closure of the zoo and site became derelict with the buildings and enclosures within the zoo becoming heavily vandalised, towards the end of the 2010’s the remains of the Zoo where bulldozed and replaced with a new housing estate.

Challenges
Recreating Glasgow Zoo possesses some challenges, the most obvious being that as the zoo has now been demolished and redeveloped into a housing estate, I cannot visit to gather more reference images. I have been able to gather 250+ images to date of the zoo in both a derelict state and from when the Zoo was still functional, however, it is not always obvious which picture represents what. To fill in the blanks I am using a mixture of the time feature on google maps and using my imagination. To guide my terraforming, I am relying on the altitude measurements in google maps however, these are set to todays measurements and since the site was redeveloped some heavy landscaping works where undertaken so elevation in my version of the zoo will not be 100% accurate compared to original site of Glasgow Zoo. 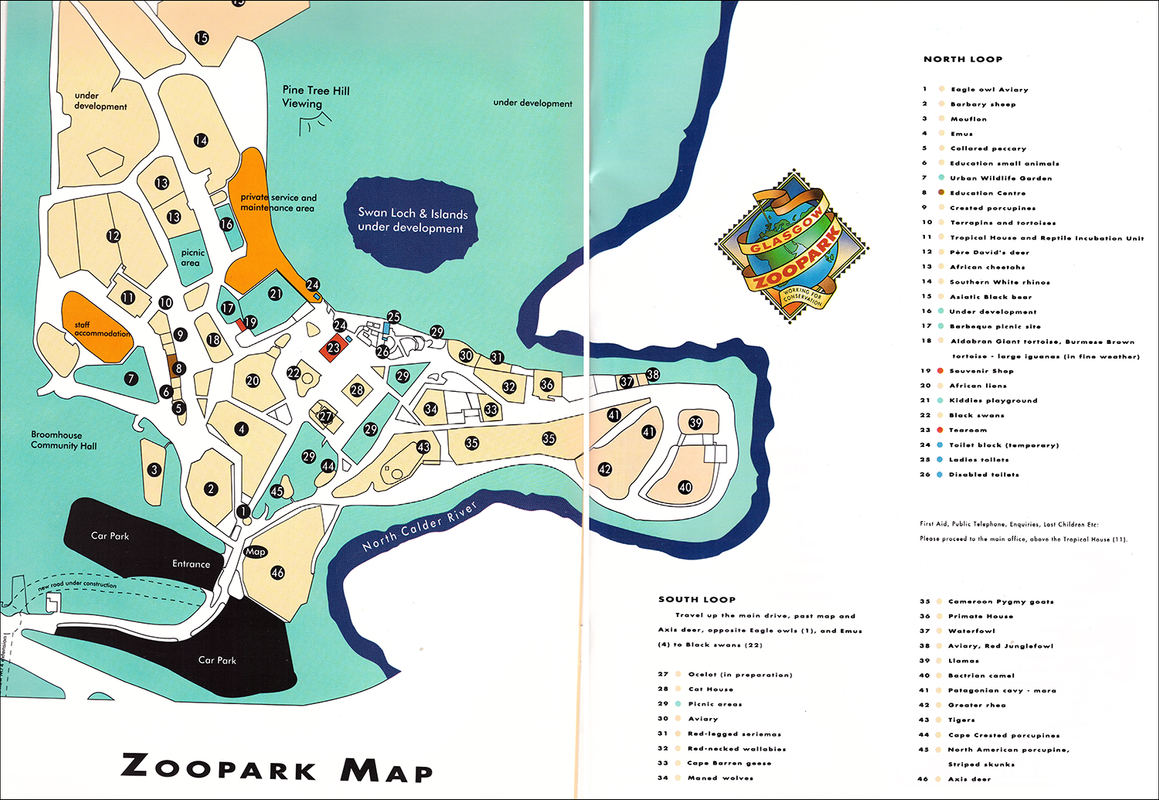 Planet Zoo outline
Below was my starting point which was an outline of each exhibit/building to scale using plaster pieces on an empty un-terraformed map. In each future update post I'll aim to provide some background information of the exhibit/building along with pictures of it in its original state and in its derelict state where possible. 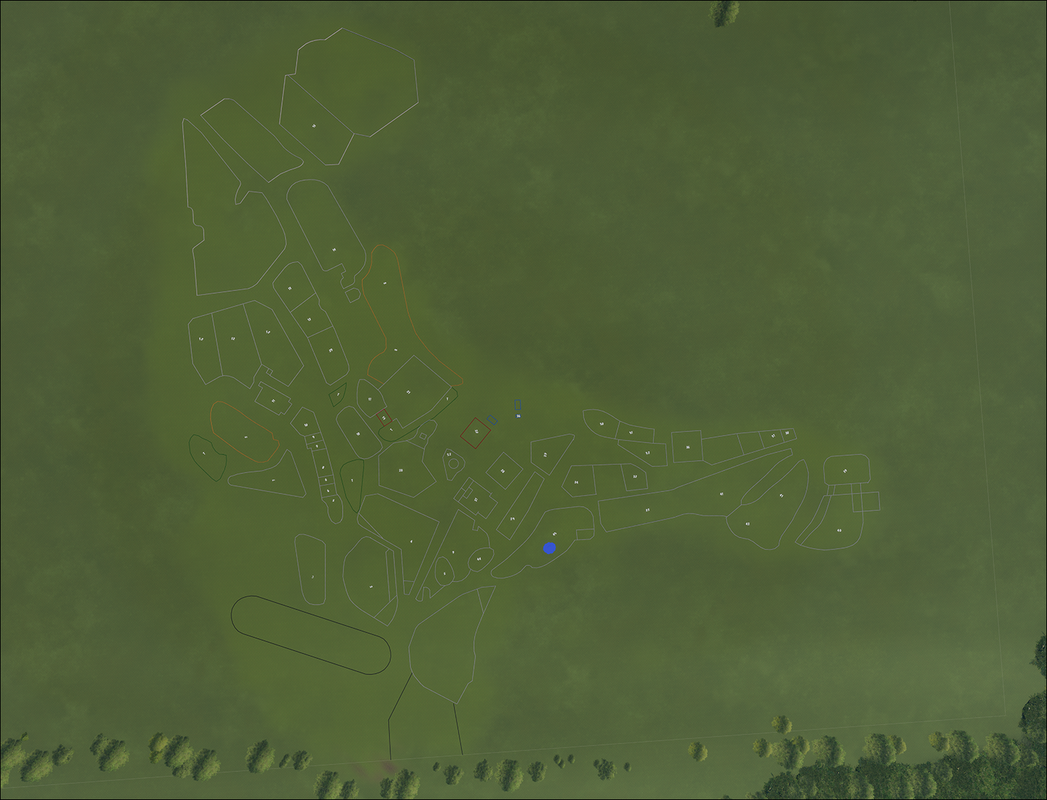 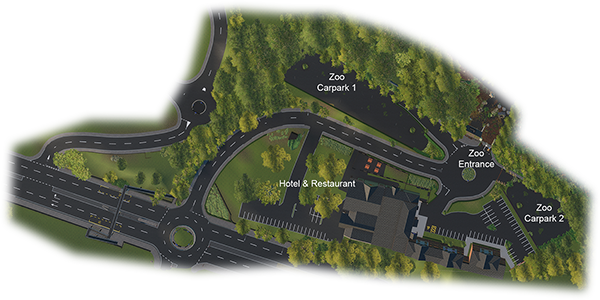 The start of the build focuses around the entrance to the Zoo, the Zoo carparks, a Hotel & Restaurant overlooking the Zoo and the roads leading into the Zoo carparks. The entrance to the Zoo was a very simple and understated ticket office with adjoining iron gates which provided vehicle access into the zoo. Both carparks where very simple with no real landscaping or signage. Once the Zoo is fully developed, I’ll hide some visitor spawn points in the hotel, restaurant and bus stops.

From the images we can see that the ticket office has been badly vandalised with the insides burned out leaving an empty shell. Security fencing surrounds the entry points while the inside is overgrown with weeds, moss and piles of rubble. 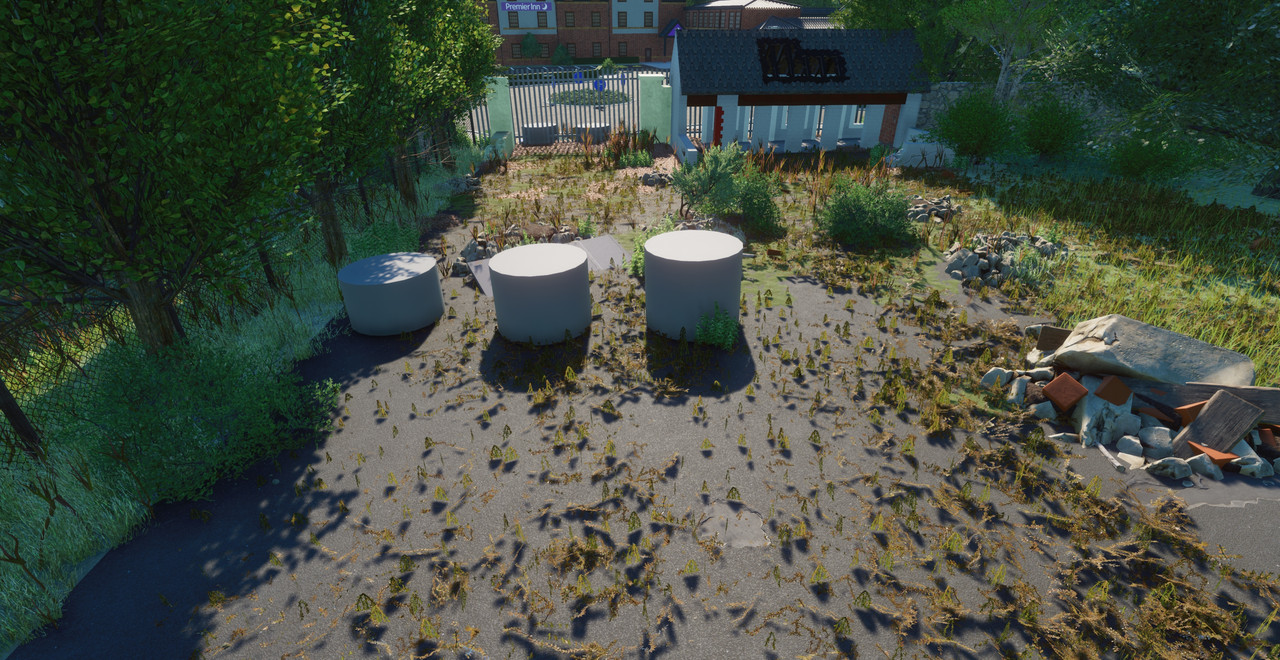 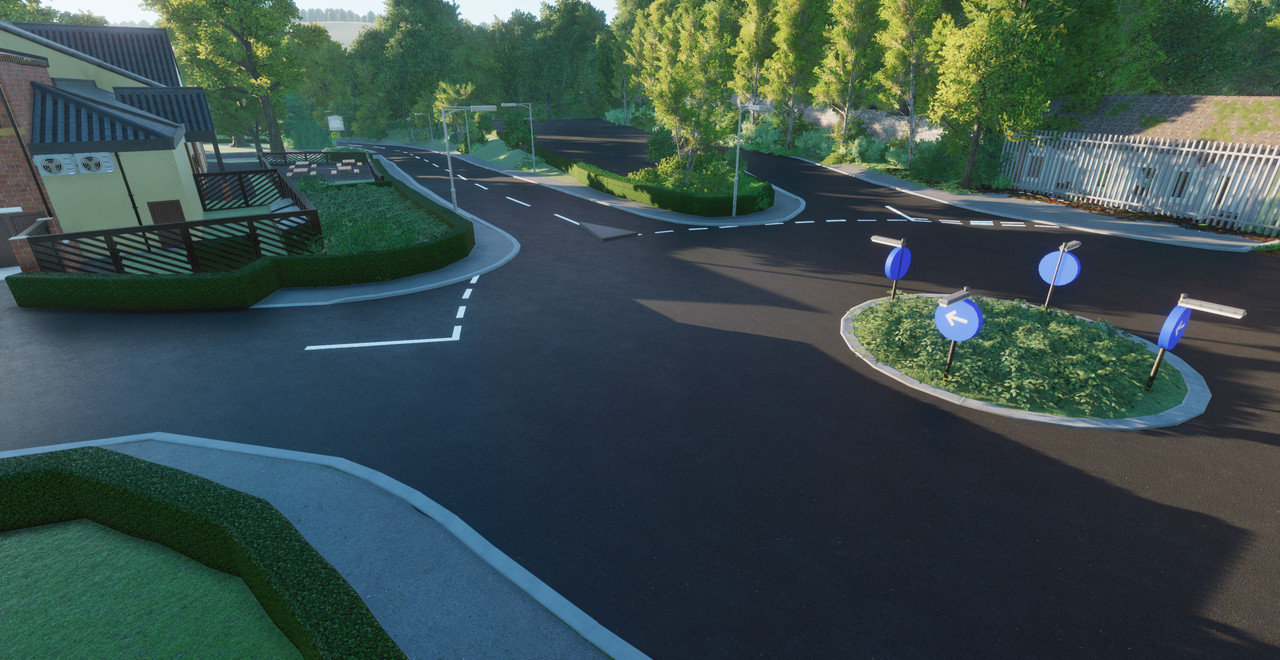 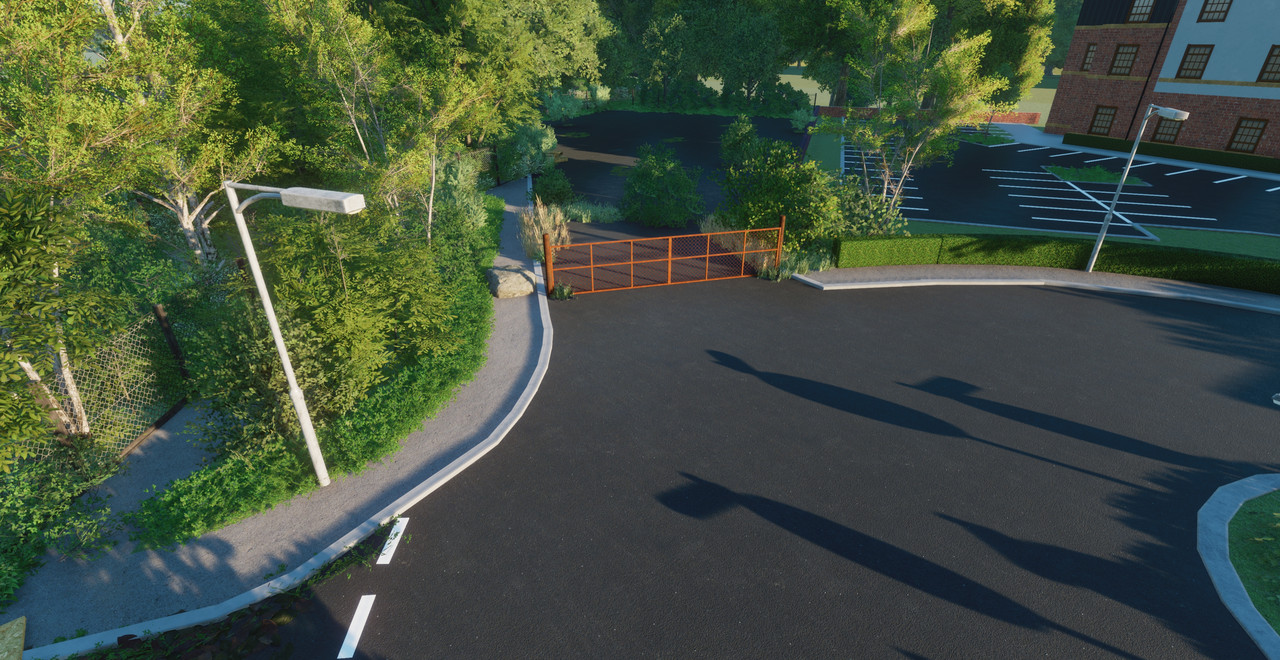 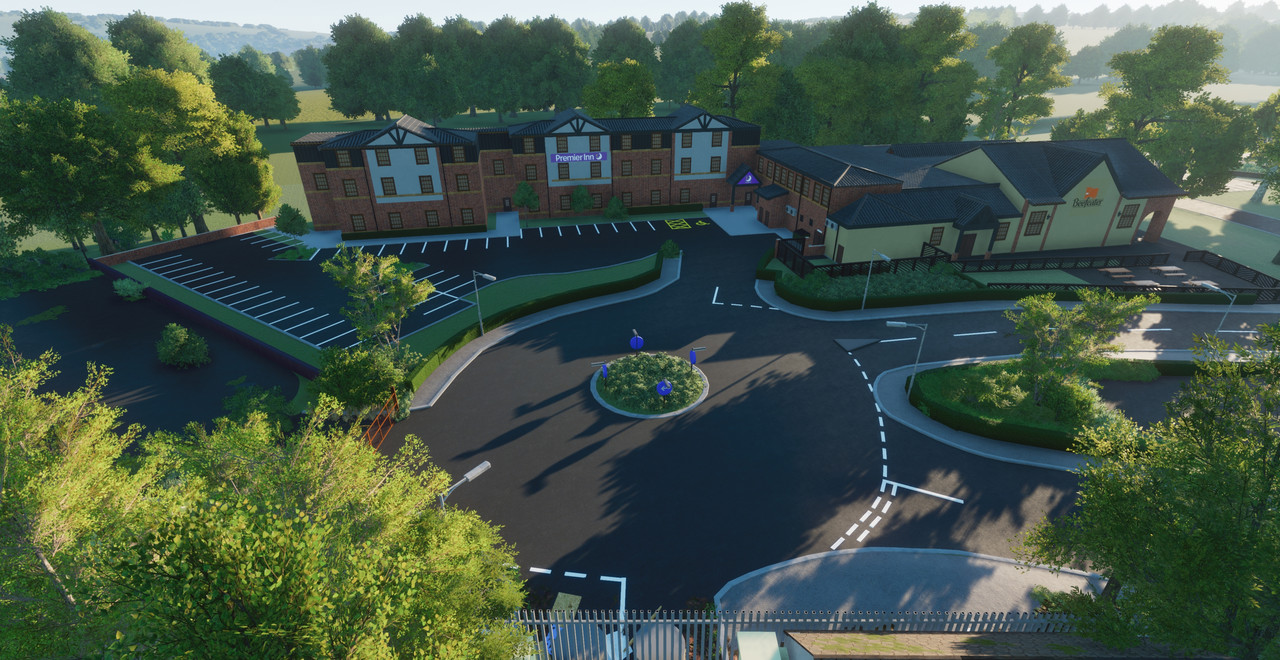 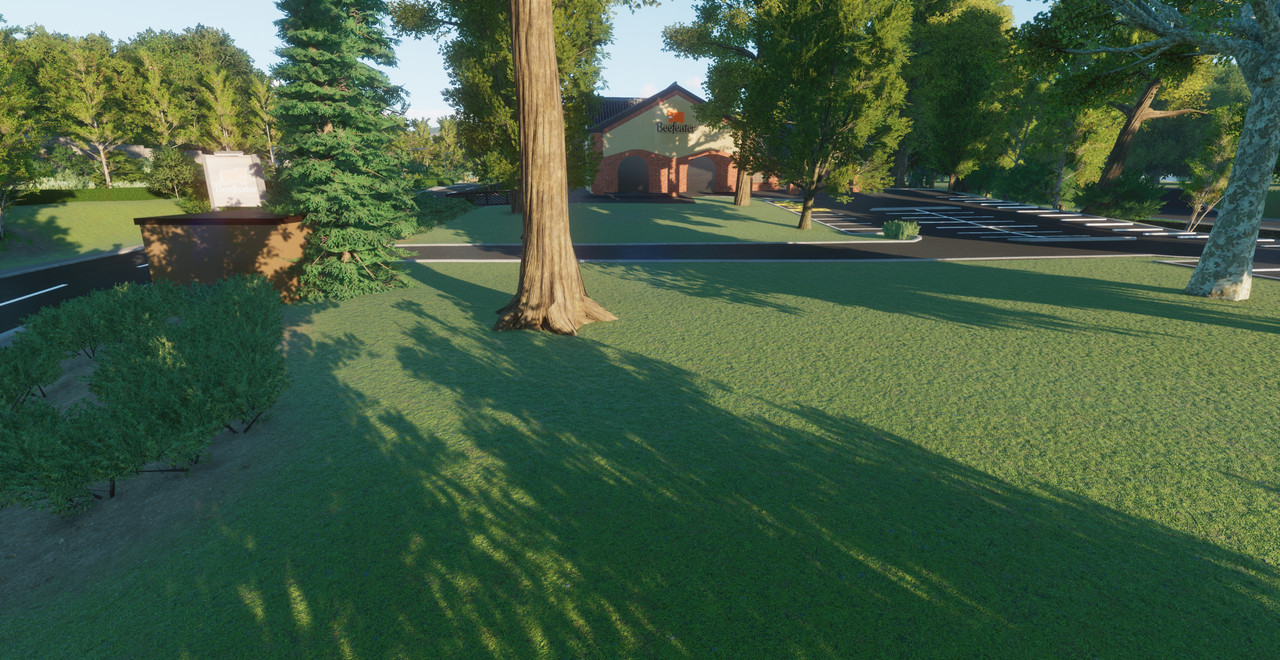 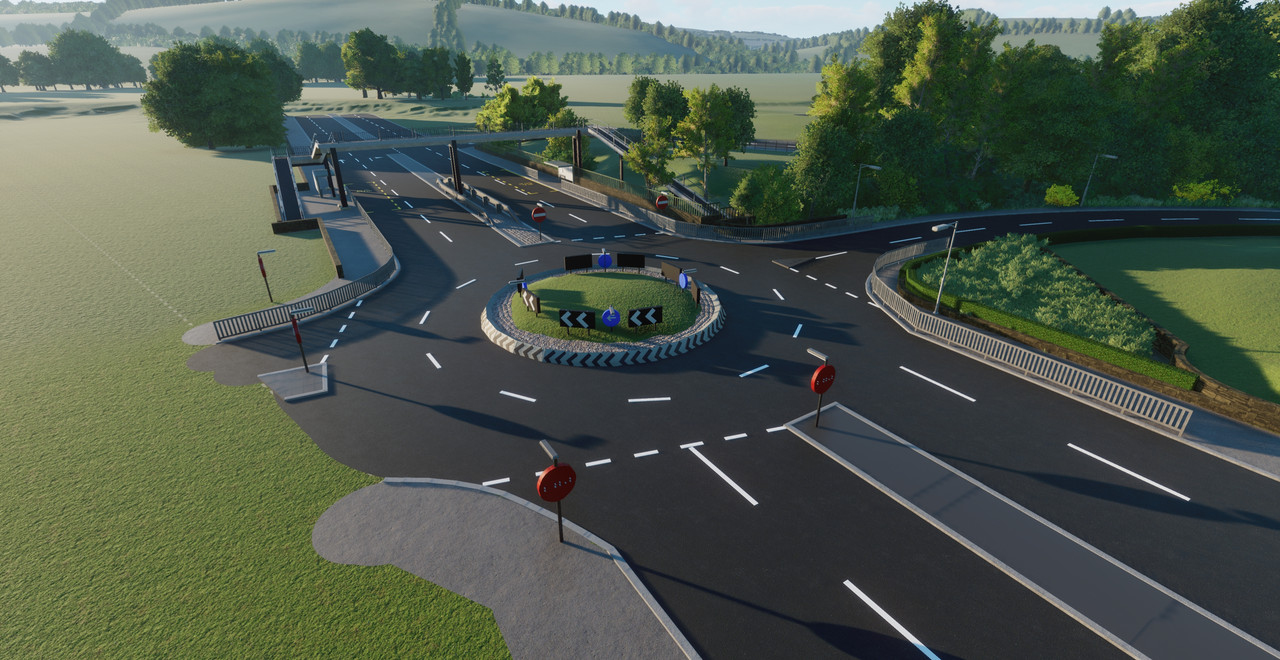 Last edited by a moderator: Tuesday at 12:38 PM

Love this. I have a project where I’m recreating Beaumaris zoo (Hobart, Tasmania, Australia), home of the last Tasmanian Tiger. It was down in the 1930s but the (very small) site remains… I plan to put it up on the workshop before I try building on it. Any chance you’ll do the same??

I don't know how I didn't see this before -- it looks super awesome. The attention to detail is nuts!

Thanks guys, I’ll upload the zoo to the workshop once completed! Time permitting I will be posting the first exhibit this evening.

Such awesome idea, looking forward to see the progress! 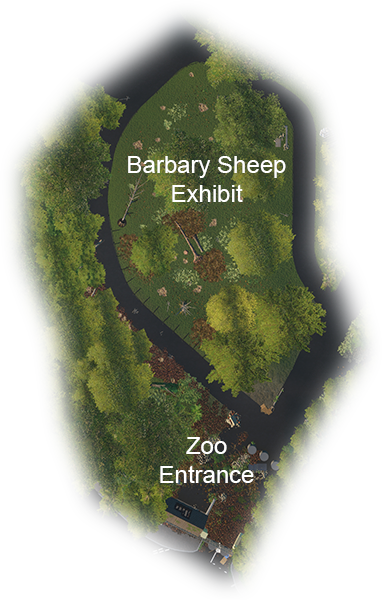 ​
Upon entering the Zoo on the left had side after the ticket office we have a sign welcoming us to the Zoo. Behind this sign we have our first enclosure which housed Barbary Sheep. I do not have much information/pictures of this enclosure however, based on Zoo maps from the 1960's and 1990's Barbary sheep have always been enclosed here. Within the enclosure there where some trees, some felled trees and stumps, a paved area and a basic shelter. From a Zoo design perspective, the enclosure itself is quite simple with paths all the way around the enclosures mesh fences This style of enclosure was common within Glasgow Zoo and a far cry from modern zoo exhibits which have more of a barrier between the animals and guests, offer animals more privacy and avoid crossed guest sightlines where possible.

I only have one reference image of this exhibit from after the zoo’s closure and we can see that the enclosure is overgrown with weeds and that the shelter has been destroyed. For the weeds I have flipped the Blue Lotus Plant upside-down exposing its roots while I have used some dead trees from the Steam Workshop made by KarmelTV & Haribo. In some parts of the enclosure, I have used wooden logs and mesh pieces to give the impression of broken fences and cracked decals have been applied to the paved area with the enclosure representing further damage/vandalism. Around the enclosure we have a mixture of trees which have been felled by strong winds, broken branches and rubbish which has been dumped. 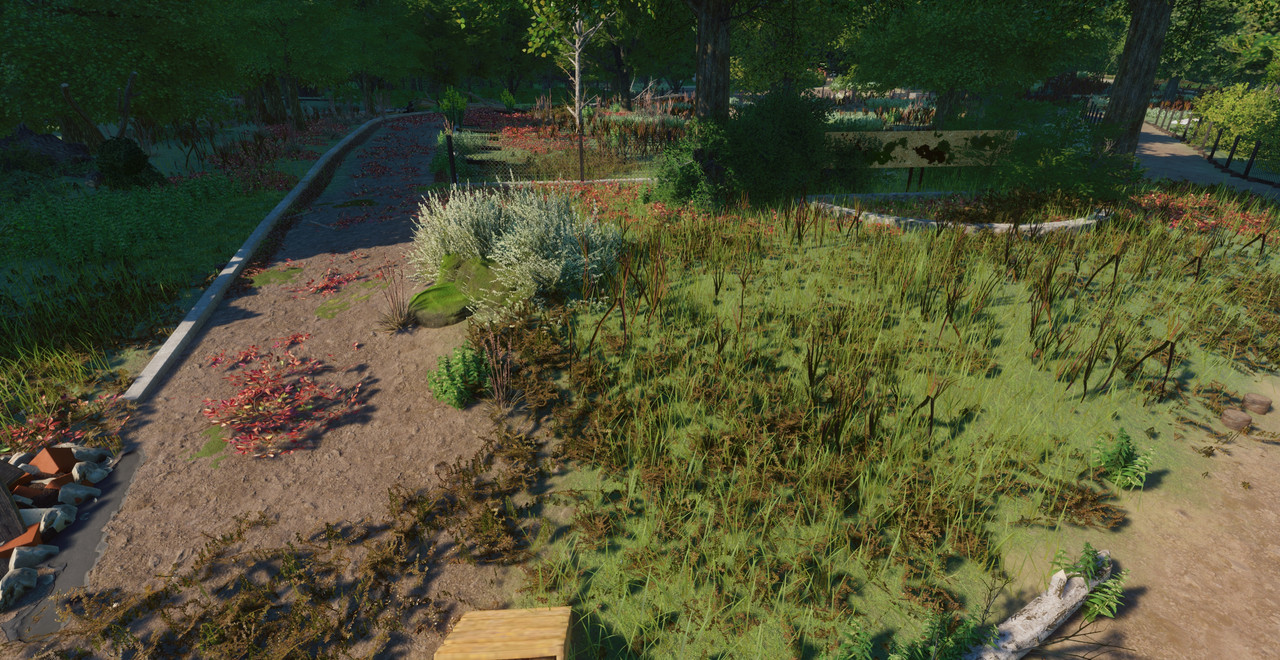 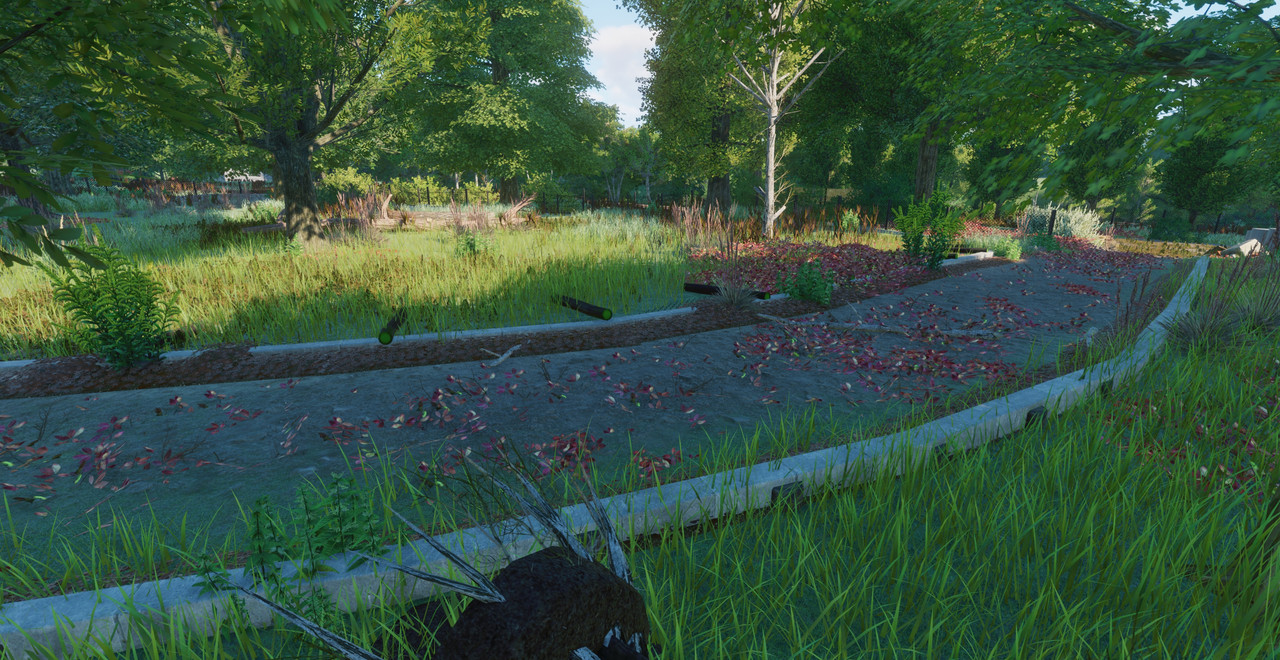 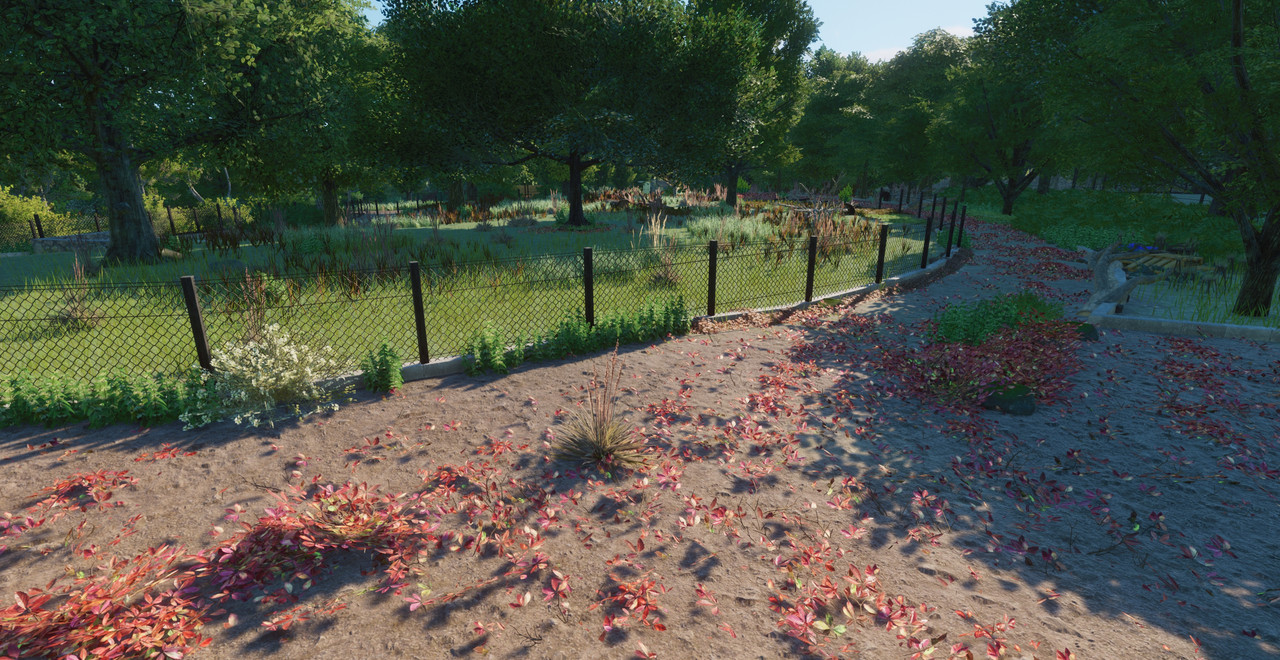 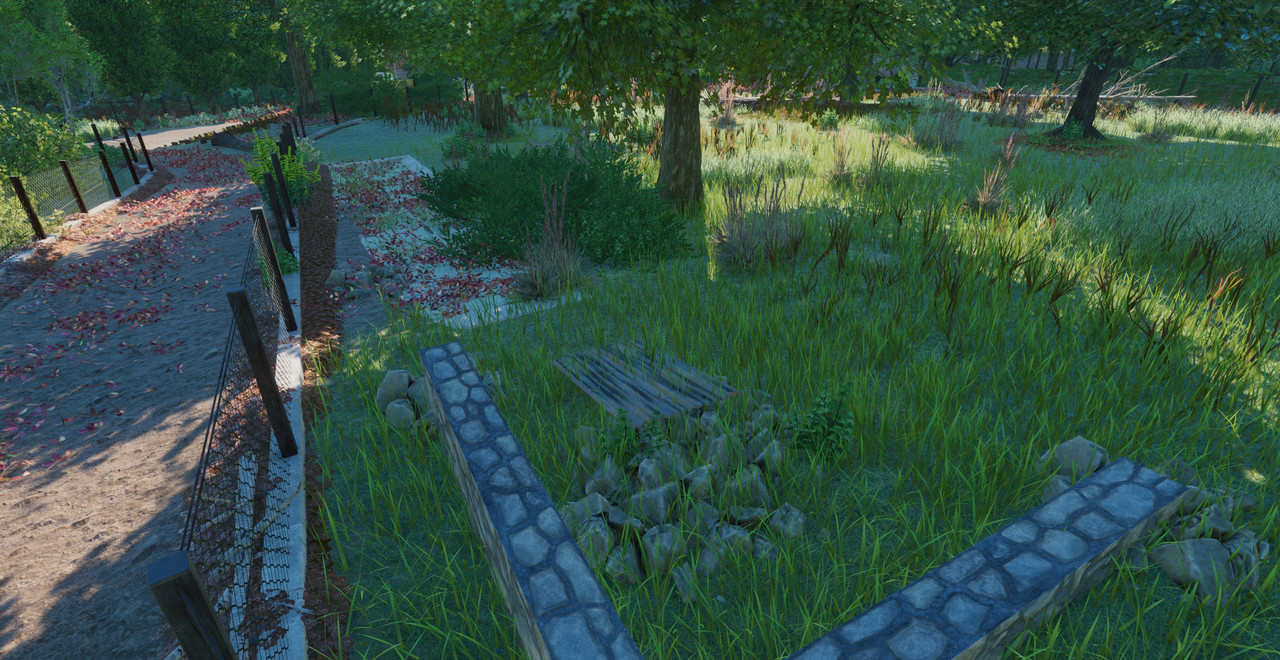 This is EXACTLY my kind of project! Love what you've done so far! How did you do the fallen leaves?!

Hello, I had to removed any photos that contain mods since they are not allowed here on the forum. I also had to remove
Thanks for understanding
Last edited: May 16, 2022

HeatherG said:
Hello, I had to removed any photos that contain mods since they are not allowed here on the forum. I also had to remove
Thanks for understanding
Click to expand... 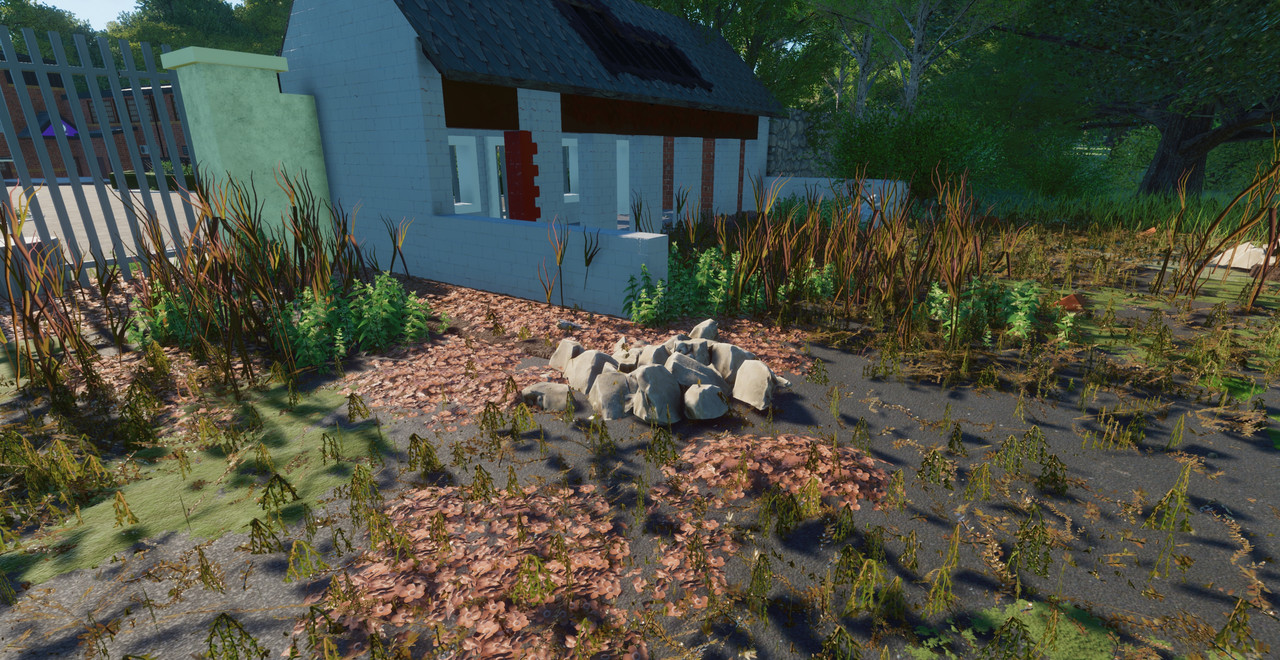 The entrance foliage has been redone with classic flower beds coloured to mimic dead fallen leaves, turned out better than I expected.

Keep getting notifs saying that @Tartan Tiger posted in this thread but can't see any new posts since Monday. Anyone know the deal?

coatifan said:
Keep getting notifs saying that @Tartan Tiger posted in this thread but can't see any new posts since Monday. Anyone know the deal?
Click to expand...

coatifan said:
Keep getting notifs saying that @Tartan Tiger posted in this thread but can't see any new posts since Monday. Anyone know the deal?
Click to expand...

I’ve been adding images to the Barbary Sheep post since my initial ones where removed. I’m hoping to get the next enclosure posted this evening. 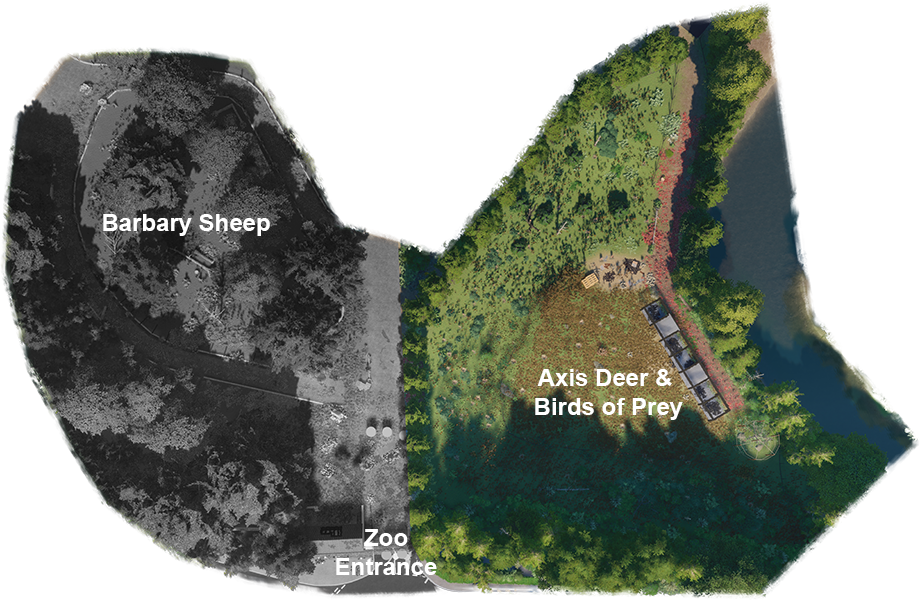 ​
To the right of the zoo entrance, we have a fenced off steep hill which leads to the old Axis deer exhibit. Again, based on Zoo maps this exhibit housed Axis Deer from at least the 1960's up until the zoo closed. The birds of prey where a later addition and going maps were added after 1990. The exhibit is fenced at ground level with sloped hills facing the North, East and South sides of the exhibit while the North Calder Water (River) flanks the West side. Within the exhibit there was a stable for the deer, a long aviary and single round netted aviary for a Snowy Owl. 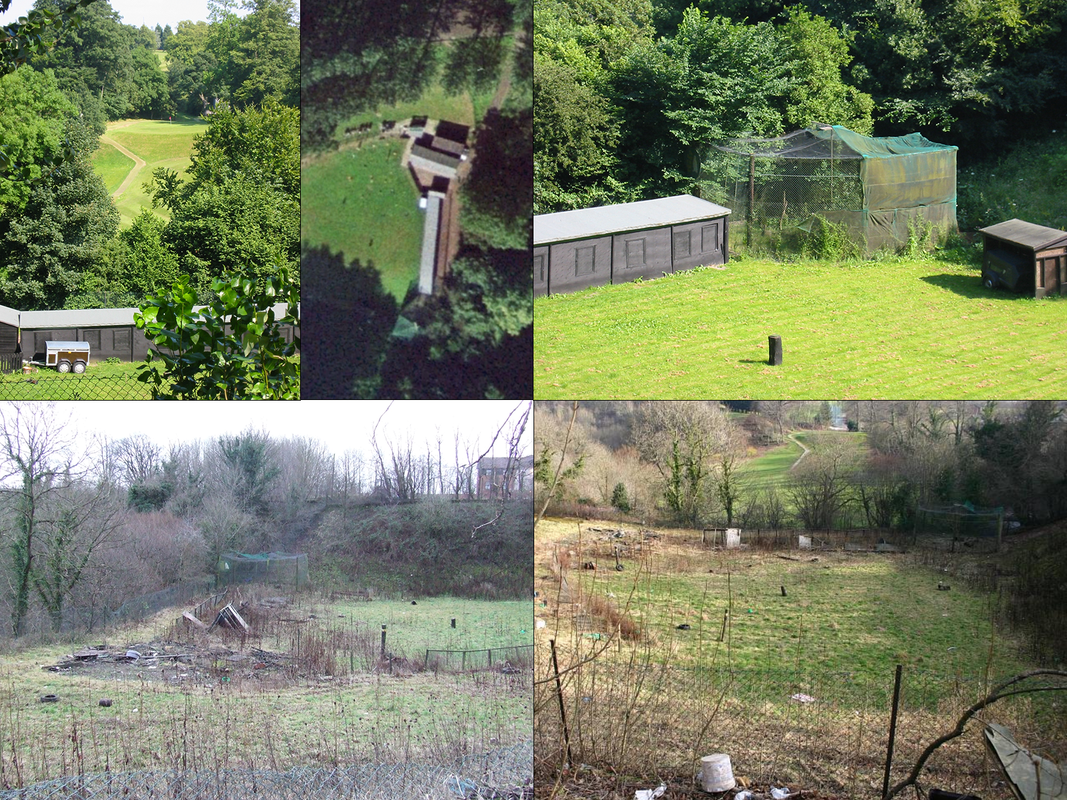 From the reference images of this exhibit from after the zoo’s closure we can see a lot of fire damage to the exhibit with the stable and long aviary destroyed. To give the look of fire damaged wood I used the moss decals and painted them black which was turned out well. The exhibit its self is very overgrown with weeds especially on the hills alongside debris and dead trees scattered throughout. This was the first exhibit which required a significant amount of terraforming which was very time consuming though I am happy with the results. 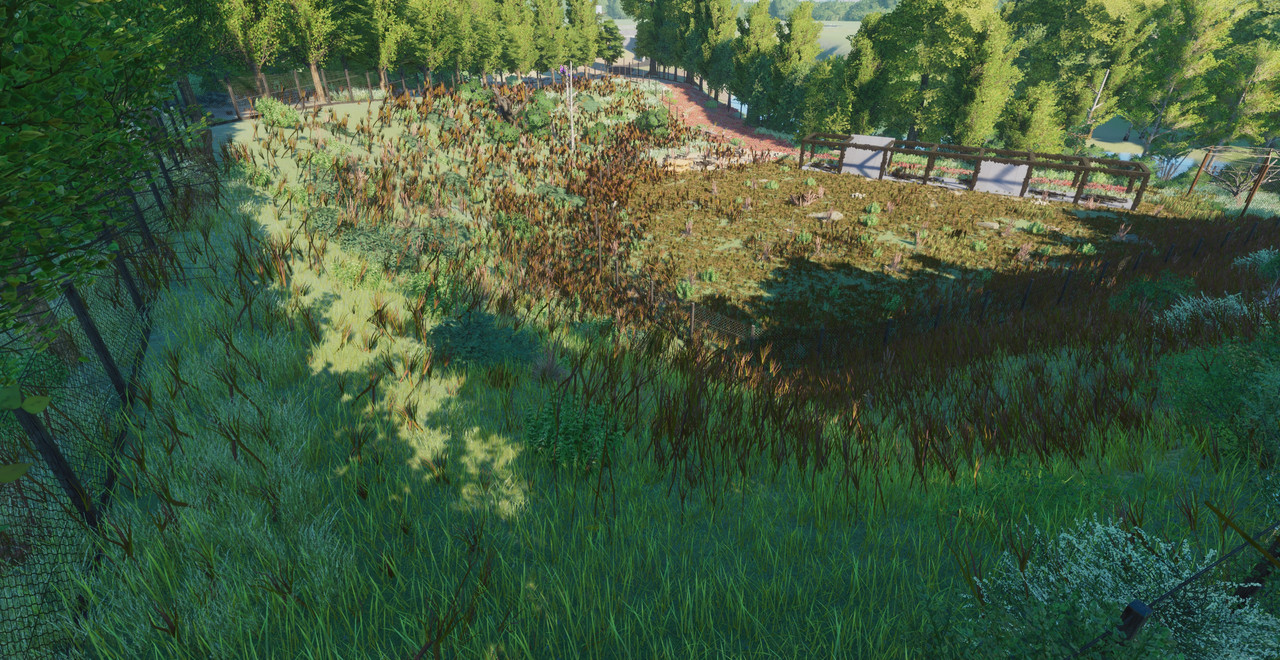 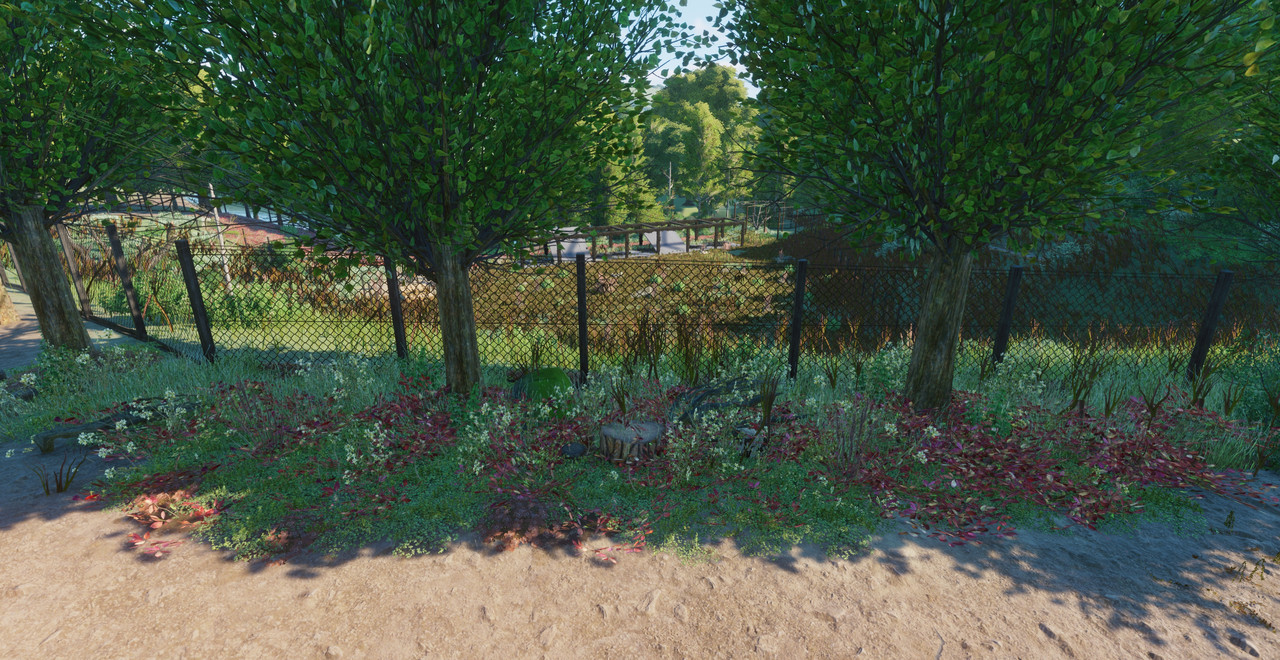 View from footpath at the Zoo entrance. 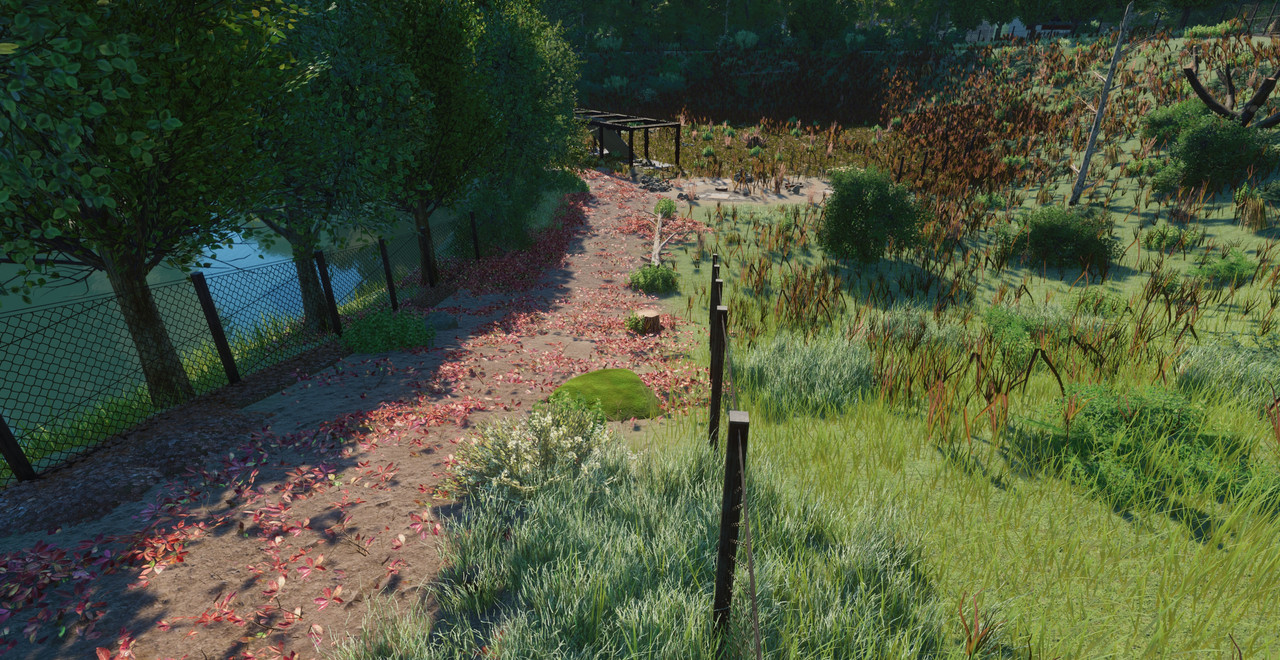 Footpath down the the exhibit. 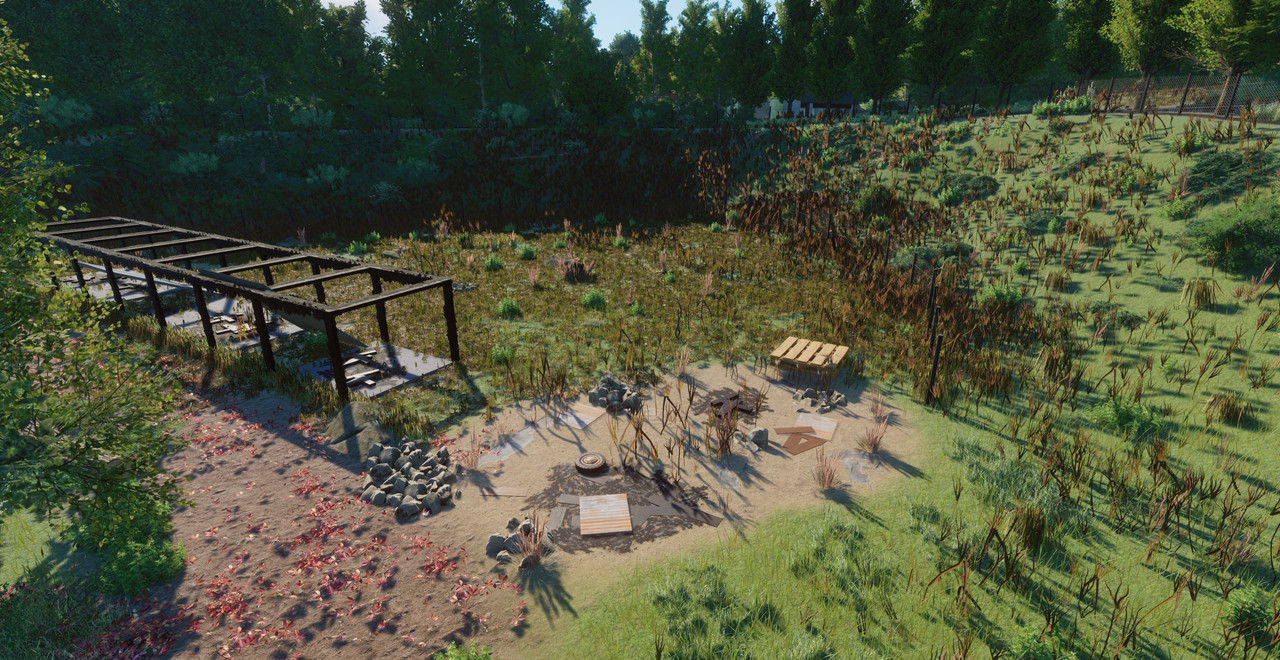 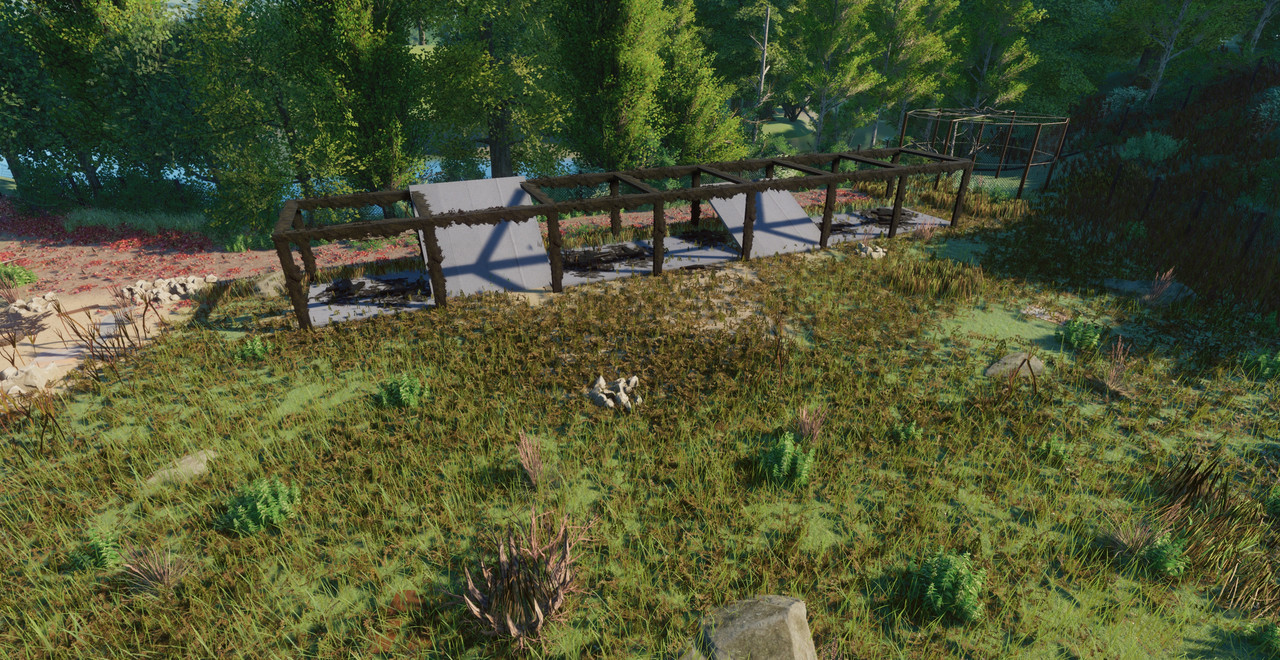 Burned out Aviary back on the North Calder Water 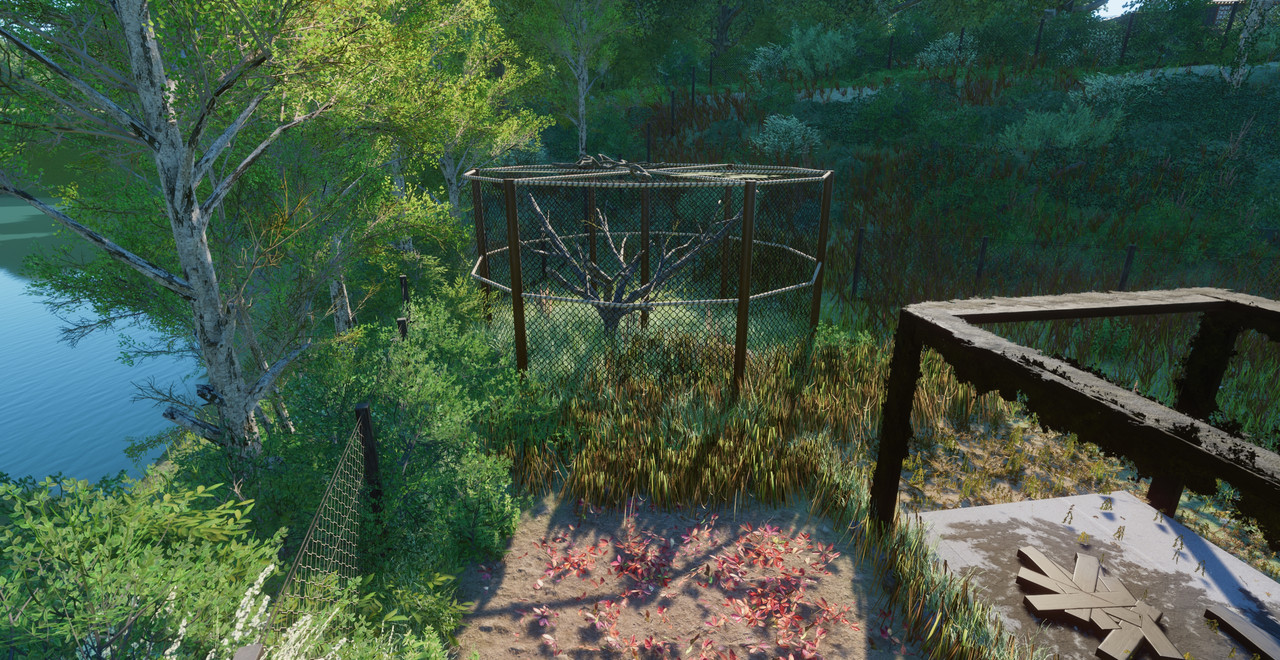