Vasco Sapien said:
I dont think its real. Base building? I know its been talked about before but no where near as much as Atmos and Space legs, its never struck me as a much desired item.
Click to expand...

You'd be surprised how much people enjoy doing busy work like building and crafting in games. The potential to grow new player crowd is huge with such feature.
Myself though is not that great fan of it. It's a cool feature to have but I don't think I will do much with it. But I KNOW others will go nuts on it.

T
I've said it before, I'll say it again : I think fdev are still sticking to their original plan.

The original plan (kickstarter page?) had airless planetary landings (horizons), fps in ship and station, basic atmospheric landings, then the more complex atmospheres and fps on those etc. I think that was the sequence, although it did say the list wasn't necessarily in sequence but it made sense it would be the plan.

What's changed I think is just the delivery - rather than incremental updates like horizons, it looks like the 2020 update will be a complete update rather than the start of a season. So I do believe on the plan the basic FPS comes first, before atmospheres, but I think those bundled together would make sense for the 2020 update. With more complex atmospheres obviously for much later.

And nowhere as far as I can remember was there anything ever mentioned about base building. So it won't happen imo. And the leak is fake.

rOmiLaYu said:
I'll eat my own hat. No way that's true. How would base building even work with the current persistence and networking and instancing issues the game currently has?
Click to expand...

they already inject crafted content into the procedural world. the game doesn't have more persistence simply because it isn't profitable for them, that doesn't mean the option isn't technically there and they can't use persistence on selected items to support their 'living galaxy' thing, which they do. by the same token they can invest just a little more hardware to support another 'killer feature' supposed to bring in another heap of $$$.

just theorizing, i'm making no bets, but that's not a valid reason to rule out base building.

rOmiLaYu said:
I'll eat my own hat. No way that's true. How would base building even work with the current persistence and networking and instancing issues the game currently has?
Click to expand...

FDev have floated base building as a possibility. IE:

On NPC-crewed ships farming for us, building bases and hiring NPCs generally:

Q: My question is, if we can buy multiple ships - will there be any possibility of crewing those ships with computer generated people so you could send ships out to trade on their own. Additionally, if you have enough money, any chance you could actually build a base, buy ships for police duties and such?

A: This is the sort of thing we will look at down the line. We want to avoid the game feeling like 'playing a spreadsheet' though, but these features are certainly on our radar. November 2014 Q&A

On making your own space station out of an asteroid:

One of the things that we have planned where ultimately, probably not at the first release of the game, that players can buy essentially an inflatable space station.

This is where you would buy something that's essentially a box that just fits in one of the biggest ships, completely fills your cargo bay. You take it out, you attach it to a very specific asteroid, or type with the right minerals in it. It melts it, and then inflates it. And then it cools, and you've got a space station. March 2014

You would be able to see heavy industry, craters up close, and ultimately be able to deposit things on the surface (stash cargo or mining machines). June 2014 Q&A

On buying space stations, and possibly ones that generate cash:

Q: Will I be able to buy a shop on a space station so I can get a rolling income while I explore?

A: That is something we have thought about, including buying whole stations as well. Because obviously if you're setting out in the unknown you might be the person that arrives with that Ocellus station... That's something that I want to come with time. Sept 2014 Vid - 23m18s

Can you conquer planetary bases? Can attack, but can't have your own one. Not yet anyway. Horizons 2015 Q&A

On 'plans for player created content, such as companies or galactic organisations?':

To start with, players are just another commander, trying to make their way in what is quite a hostile galaxy. However, participants can form alliances with other players, and we do have plans down the line for building space stations and so on. May 2014 Interview
Click to expand...

C
Well, I've heard the road map includes cultural trading stations where you can watch Powerpoint presentations about Vogon poetry... all from the comfort of your cockpit.
What a time to be alive

Of course, FD would never ever include something that nobody really wanted much

C
Not bothered about base building. Spacelegs yes. Atmos: what would they add that we don't already have? Driving an SRV on a planet with an atmo is fundamentally little different to driving an SRV on an airless rock. Apart from having 'trees' in the way.

I'm firmly of the opinion that the post is twaddle.
There maybe some things in there that are right more by accident than by design.
If you cast a wide enough net you're bound to catch SOMETHING.

Stealthie said:
A wise (but sneaky) man once said that the best place to hide a lie is between two truths.

This is probably somebody who did get some information about FDev using it to provide credibility for their own assumptions.

To be brutal, FDev's "100 person team" took two years to produce Horizons and more than a year to produce Beyond.
Unless they're all mainlining Proplus and NZT-48, I can't see them putting together a viable FPS and a base-building system in 18 months as well as rolling out bug-fixes and minor updates at the same time.
Click to expand...

Who says it has to be a viable FPS? They could always save time by doing a bad job. Space Legs is just another SRV with different animations.

Alien said:
I don't believe it.
A) TT Games made Lego Star Wars Force Awakens, I doubt Frontier would get the contract. Also Lucasfilm Games Division has also started back up.
Click to expand...

Hey, they've got as little experience as FDev at making an RTS, it'd be a fair fight

Seriously though, def interesting counter-points there. (I could imagine JWE's success, and a solid RTS prototype, snagging them some high end IPs though, even as outsourced work from brands with fingers deep in other gaming studios. Purely theoretically like )

M
Could we lock this thread?

We know P2P and instancing mechanics could not handle any kind of base building with this engine (as I have understood, correct me if wrong), players building bases would just make a mess on other players clients.

Space legs are a different story, but I see less need for that than atmospheric planets, where else we could even use those "space legs" outside our ships?

What's with the over long landing sequence?
I also love the fact everybody looks like they're holding in a big wee apart from the guy at the back who looks like he's trying to pass a 'silent but deadly'!

Alien said:
I could engage sarcastic mode, but in the past that has riled people up the wrong way .... so ...
Not saying Elite Dangerous won't have walking around in it, but First Person Shooter style game is new to Frontier and Elite, so as I stated above, I am of the opinion this is fake.
Click to expand...

Almost all of their early references to Legs discussed FPS aspects, so this seems a strange objection 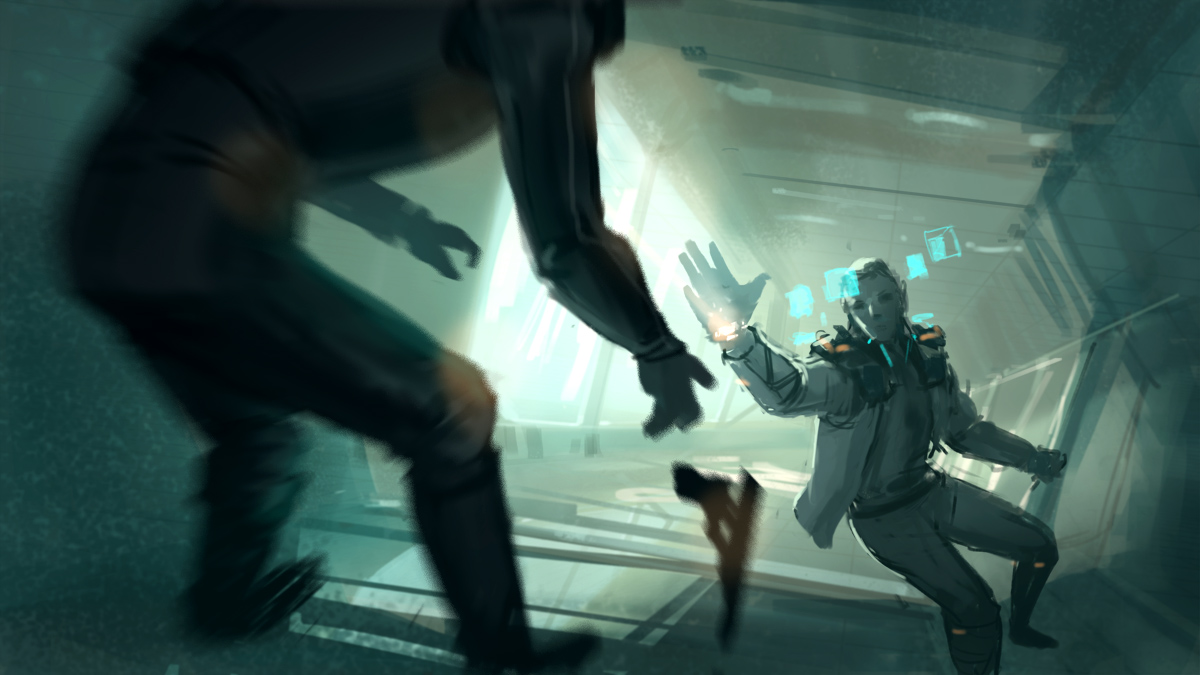 Myspace Kaitsu80 said:
Could we lock this thread?

We know P2P and instancing mechanics could not handle any kind of base building with this engine (as I have understood, correct me if wrong), players building bases would just make a mess on other players clients.

Space legs are a different story, but I see less need for that than atmospheric planets, where else we could even use those "space legs" outside our ships?
Click to expand...

What's wrong with you? If you don't like the thread how about go away?

Will the cobra engine be able to handy wonky bases.

LeoBartlet85 said:
Will the cobra engine be able to handy wonky bases.
Click to expand...

Cobra has a native Direct X mode that when enabled can fully render 80's television. I think Adam said this level of eye candy is not available at lower detail settings.

Myspace Kaitsu80 said:
We know P2P and instancing mechanics could not handle any kind of base building with this engine (as I have understood, correct me if wrong), players building bases would just make a mess on other players clients.
Click to expand...

Tbh im not network wizard but one would have to at least entertain the idea that if legs and co are in the games future then perhaps p2p might not be long for this world.

I should add I say this more in hope than anything else.

L
Base building. How much material to build it will be needed.
I'm going to have nightmares now.

I think you guys are losing sight of the fact its obviously just a wind up.

You wouldn't be the first person to have nightmares after reading something from 4chan.