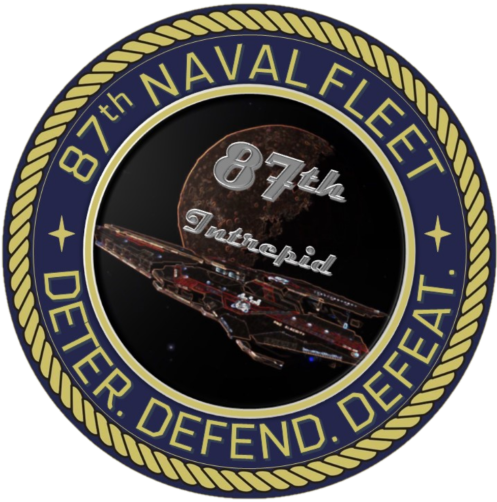 DETER. DEFEND. DEFEAT.
That is the Motto of the 87th FEDERATION AUXILARY NAVAL FLEET.

WE ARE A STORY BASED - ROLEPLAY GROUP!
​
We are a squadron of Federation pilots who accept Imperial and Alliance pilots along with pirates.​
We are a formal military unit of Auxiliary Federal Navy pilots dedicated to roleplay within a military context.​
We have dedicated sub-wings, and even space for bad guys to help form stories and campaigns.​
​
Effectively we are trying to give meaning to Elite Dangerous and provide a "story campaign" of sorts in lieu of real campaigns, with a focus on honoring Lore.​
​
We play in OPEN, but don't worry, we mentor new pilots, and engage in gameplay reminiscent of structured ARMA III military play.​
​
We are not tied to any minor faction, but do help Federation Factions where we can.​
_

WELCOME RECRUIT! The 87th is in need of your service!
ENLIST TODAY

Fleet Admiral - Myself, the leader of the 87th Naval Fleet. I issue operations and deal with the diplomats that come needing the aid of the 87th. I am the ultimate authority on issues pertaining to the fleet.

Rear Admiral - The second in command. There is potential for multiple rear admirals. In my absence they lead the 87th onwards to victory. They out ranks Captains and can foster ties with other groups in the absence of the fleet admiral. They can coordinate full battle groups and operations as needed.

Wing Captain - ACCEPTING APPLICATIONS: These are the four leaders of the four wings of the 87th Naval Fleet. Each captain is responsible for those in their wing and tending to their operational needs given the distinct roles of each wing. The @6th Wing 66th Squadron captain holds a higher authority to the other captains given the sensitive nature of their work.

Flight Lieutenant - ACCEPTING APPLICATIONS: Each "FLIGHT" is a team of 4 vessels. The Pilot's Federation calls them "WINGS" In the 87th we call them "FLIGHTS". Though pertaining to different Wings, the Flight Lieutenants are in charge of missions assigned to their flight and keeping their unit operating smoothly.

OFFICER - All non ranked pilots are officers, given their need to have the authority to kill. Though not all pilots are expected to kill, especially those of the 92nd Research & Expeditionary Wing and 108th Heavy Lift Wing, all pilots should have this legal authority should the need arise. Thus the rank.
THIS COULD BE YOU!!!

COVAS AI - The Resident Artificial Intelligence aboard the FNS INTREPID. It currently has glitched out several times but is still useful for advising on issues. Ask it questions in #hangar-bay

MARSOC - Our Marine allies from the Marine Forces Special Operations Command Group. They operate as a quasi-autonomous group within us.

Security & Economic Consultant - Our formal advisor from the Retro Faction of Voltrigones. They offer news in #federal-galnet and operations advice

Ambassadors and Diplomats - Formal representatives of factions from all over.

DATES RIGHT NOW IN FLUX AS WE RECRUIT MORE MEMBERS


118th Tactical Fighter Wing​
The core of the 87th Naval Fleet. Our foundation upon which we build the fleet. They are the guardsmen that have pledged to hold the line of the Federation against all who oppose it. Basic roles of the 87th are Fleet Carrier patrol, Combat Patrols, taking on hostile forces from factions and governments, limited service for our political parties, President Zachary Hudson and Minority Leader Felicia Winters, as well as combat against Thargoids, and escorting the 92nd and 108th to wherever their mission profile takes them. If the 118th grows weak, then the 87th Naval Fleet probably doesn't have much time left, they are whom we rely most upon.


108th Heavy Lift Wing​
If the 118th is the core, then the 108th is the Right arm of the 87th Naval Fleet. These fine folks are what allows the 87th to aid the systems under the Federation. They are the silent force that projects the influence of the 87th Naval Fleet onwards. They serve in the role of Mining Fuel for the Carrier, Delivering supplies in support of humanitarian missions as was done with the Golconda, Trading goods for profit to maintain the fleet, and to carry Ground vehicles for ground invasions. Evacuations and Emergency supplies are another aspect of the 108th and in recently hard-hit areas by the Thargoids. Without them, well, the 87th Naval Fleet would grind to a literal halt.


6th Wing 66th Squadron​
Special Activities Division. In every fleet there is a need for more sensitive operations. This is the 6th Wing's Specialty, undercover focus with plausible deniability. The members of the 6th must be able to adapt to any mission scenario needed and accept the risks that intrinsically come with such responsibility. However they must be ready for they represent the Elite of the 87th.

Those Shadows...those nightmares that pilots who stand opposed to the Federation have...those shadows are the reminder that the 6th Wing's infamous 66th Squadron are always on alert, always hunting. The pilots of the 87th Naval Fleet are always under threat, but they take this is full stride, after all they signed up for military duty, but every now and then there are Elite enemy pilots that reach out of the darkness to assault our sworn duty to the Federation. This is where the 66th steps in. NO MORE! They call out into the depths of the black sky. FOR WE WILL LASH BACK OUT! Ships equipped to the extreme. Custom, unorthodox builds bristling with weaponry modified beyond measure. Crewed by pilots with skill unmatched.

I almost pity our enemies. For I would not want to be on the other side of the 66th Squadron.


92nd Research & Expeditionary Wing​
For as war focused as the 87th Naval Fleet is, we would be blind without the steadfastness of the 92nd. Taking off in their exploration ships, they bravely hurtle themselves into the unknown. Our forward scouts, our intelligence gatherers. They are the Research gatherers for the 87th. They scout out the ruins of ancient civilizations for the benefit of the 87th. They let us know of the dangers of the Thargoids, while also observing them in hopes of finding a peaceful resolution to this conflict. They scout out ahead of the carrier to make sure the INTREPID never flies into unforeseen danger. Without the 92nd...we would be blind.

Ambassadors and Diplomats​
As with all aspects of the 87th, we ultimately serve the Federation's as a whole. These are representatives from different corporations and factions of our great and mighty Federation. While their suggestion and orders do not supersede my own, my own orders are very much driven by their wishes and needs. Respect our officers. And make sure to always cast the 87th in a good light for these Officers.

Base Assaults with air support, and a coordinated wing feeling.
Special bounty hunter hunts, where a wing hunts down one our KILL ON SIGHT bad guys.
Exploration of the Guardian and Thargoid Ruins
Group BGS work that makes the factions feel meaningful and important
Coordinated combat with Small/Medium ships to up the danger and the reliance on your squad mates
Playing a role and feeling supported while knowing that your job is important no matter what.