WELCOME TO THE SOCIAL ELEU PROGRESSIVE PARTY (a.k.a. SEPP) AND OUR COLONIA FACTION, THE EXPLORERS NATION (EN) GROUP PAGE

SEPP is one of the longest running commander factions in the Galaxy, founded in February of 2015, shortly after the launch in December of 2014. It basically started when then cmdr Kancro Vantas started pushing an existing NPC faction in ELEU and accidentally causing it to expand to the neighboring system of SANTJALAN. Since then, it became clear the background simulation and changing a system politics -and even its market-, was a possibility! We now regard ELEU as the Capital of a Nation that includes over 20 systems between the bubble and Colonia combined -and growing!

Since its creation, we have overcome some obstacles and achieved important goals as well as witnessed some of the most interesting developments of the community and the galaxy! Hundreds of commanders have supported our group through our history and we have a closely tied team of cmdrs that keep this organic project going!

We participated in the Lugh Wars on early 3301 supporting the Lugh independency and the Mercs of Mikunn -to date one of the most bloody wars ever, first event using CG in the game and it yielded historic results for BGS-, we survived the Cerberus Plague of 3301, we saw our Capital, ELEU, taken away by the Federals, and lived in exile in SANTJALAN for almost 9 months, we were one of the main co-organizers and supporters for Distant Worlds Expedition in 3302 -and are already involved in the DW2 Expedition.

We were selected as one of the top 5 factions in the game in 3302 and were automatically selected for the Dangerous Games, which we finished in 3rd place in spite of being the smallest faction by far (we were around 10 commanders in the official roster versus factions that housed 300 cmdrs or more!) We have confronted some serious enemies but overall and most importantly, we have had an awesome fun time doing it and have learned lots!

As an exploration and peaceful group, one of the main goals have always been to expand towards the edges of the bubble, trying to be as outwardly as could be possible! Creating a presence out in the depth of the Galaxy has always been a paramount goal of ours, and thus, we were one of the pioneers groups to arrive in Colonia when it was created through the Jacques Expedition back in 3303. Together with the now extinct Spanish faction Corsarios de Heimdal, we founded Union in Colonia, creating the Explorers Nation, our ambassador faction in the new frontier.

Today, there is a vibrant and dynamic community of SEPP commanders living in the Explorers Nation, which since inception has taken control of an asteroid base, a mega ship and a coriolis station, all of which makes EN one of the most fascinating spaces you would ever find in Colonia!


SYSTEMS UNDER OUR CONTROL

Our space is not only vast and rich, it is also extremely diverse!! We have all kinds of systems, planets, and stations in existence that you can imagine or dream of!

Here are some of the most attractive facilities in our space:

SANTJALAN:
-Cantor Terminal: The place to get the latest gadgets and modules for your ship! High Tech station and our main Data Material Trader! A statue of General Red Barron, co-founder of SEPP, is somewhere in the middle of the station!!
-Martinez City: Research outpost with an "Apple" outlook. Favorite for medium ship explorers to rest and study the galaxy! Besides that, is the place where SEPP as a group was conceived in February of 3301, when then cmdrs Red Barron and Kancro Vantas had their historic meeting and committed to "create a safe space and nation for explorers returning to civilization". This is known as the "Martinez Manifest Meeting".

LOUGUALA:
-Akers Port: A SEPP staple and jewel! This touristic station is the favorite destination of wealthy and powerful people in our space! Luscious parks, casinos, and pristine interior!

20 OPHIUCHI:
-Chargaff Port: The mining powerhouse of SEPP! Orbiting a ringed gas giant, is a truly amazing place! One of our most visited systems, 20-O is our second most important system! The fight for it took us almost a year, in a series of wars, defeat and ultimate victory that took place in 3302, and are collectively regarded as the "Painite Wars". A monument for General Terrorfirma has been erected there, as he was a war hero fundamental for our victory there!

MECHET:
-Robson Port: This is the financial and banking station for trade and commerce chambers of SEPP. Central Bank and Ministry of Finances and the Treasury, all under General Adept Geraden, are located here.

GIO:
It is a "Green System". You can find all the ores needed for FSD boost, it has amazing vistas and a variety of planets hard to match anywhere else in our country.

UNION:
- Rebolo Port: named after the spanish director of the Instituto de Astrofisica de Canarias, Dr Rafael Rebolo Lopez, this planetary base was our first establishment in Colonia, founded with together with the now extinct faction Corsarios de Heimdal, in 3302. The system and the station are both named as a testament of what collaboration and cooperation among factions and mankind can achieve together!

CARCOSA:
- Robardin Rock: this asteroid outpost is an excellent facility for mining, research, exploration and even acquisition of modules or ships! definitely worth a visit! It has become our main headquarters in Colonia! Explorers Nation General Lord Anoobis plaza and monuments are here!

COEUS:
- Foster Terminal: a mega-ship encrusted in the depths of the ice rings orbiting class I gas giant Coeus A2!! Stunning views!! A must visit location for all explorers in Colonia!
JOIN US!

Come to our Discord Server, introduce yourself and be part of our great extended family of friends, allies, recruits, commanders and captains! share information, be in the known, make friends to chat with, and join our team of dedicated explorers and BGS players!!

ELEU IS CALLING YOU!! COME HOME TO US!! (click here for Discord invite)

Welcome to SEPP,
a quadrant on the edge of the bubble that has it all, sell data, trade mats, bounty hunt, run missions, mine, combat, outfit and engineer your ship.

In Colonia EN,
will welcome you with great facilitates such a megaship an asteroid base and planet bases, where you can relax, fix and upgrade your ship before heading back out into the void of space on a long journey. 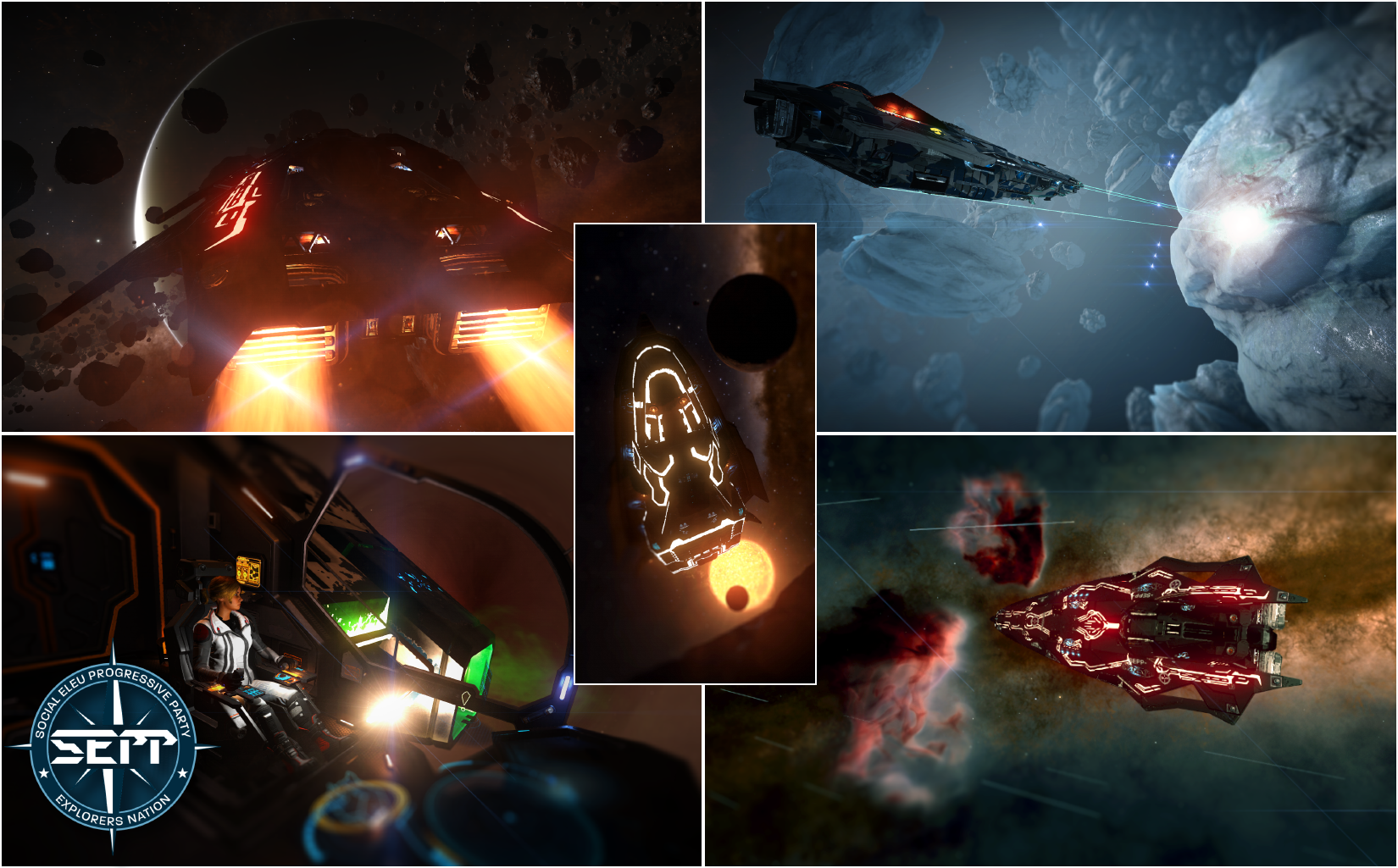 Welcome to SEPP in the Bubble and Explorers' Nation in Colonia!

We are a player group who primarily comes from an exploration background but who have learned to excel in all other areas. We have teams who maintain the BGS (background Simulation - economy) of our systems to grow and maintain safe ports for explorers of the galaxy. Here in our player groups you can learn how to work the BGS to your advantage, learn to be a trader, combat pilot, miner, explorer. Several of us actually have two or more CMDR accounts so we can keep one in SEPP space in the Bubble, and one in Explorers' Nation space in Colonia... or out exploring in the deep!

We welcome new players and experienced ones.
Come fly with us if you are new to the game, or an experienced pilot. Our main connection is the friendship and fun we have flying together. We run wing missions together, have wings of combat or bounty hunting, explore the galaxy and teach and learn together. Join our Discord and ask for access. You can get a feel for the group in our public forums and voice chat and decide the role or amount of involvement you want.
Discord Invite

As explorers, our members have travelled the length, breadth, heights and hollows of the galaxy.

We have many veterens of deep space exploration and you will find us involved in expeditions and projects in the Bubble, Colonia and the Deep Black.

Rebolo Port in Union, our home in Colonia:

[/IMG]
Some SEPP cmdrs at Death Spiral during the Enigma Expedition:

Come and say hello. This is a fun bunch. Now say my name.

Social Eleu Progressive Party is getting ready for the biggest expedition event in Elite!

If you are new to Elite and would like to get involved in this historic event or simply haven't explorered much yet, SEPP can help you get DW2-ready.

Our commanders are expert explorers. We can help you get to grips with the new exploration mechanics coming in Chapter Four, and set up a ship that can take you to Beagle Point.

Love the video! I just sent a request to join the Explorers' Nation squadron. Would love to get on board!

I was browsing through your introductory post and I couldn't help notice a slight inaccuracy here:


Kancro Vantas said:
CARCOSA:
- Robardin Rock: this asteroid outpost is an excellent facility for mining, research, exploration and even acquisition of modules or ships! definitely worth a visit! It has become our main headquarters in Colonia! Explorers Nation General Lord Anoobis plaza and monuments are here!
Click to expand...

Having just checked in-game, it appears that Explorer's Nation doesn't own Robardin Rock, or any base in Carcosa for that matter.

I also realised that your thread does say "WIP" so I hope this helps with keeping things updated and accurate for your potential recruits.

we are a small but growing Group of Xbox comanders ( atm 5-10 cmdr) who switched from bubble to Colonia. we are peacefull Traders Explorers and Miners. Since a couple of weeks we are in Colonia and after some of us finished unlocking the engineers we search for somenew tasks there. we settled down in coeus and so we meet Explorers Nation. we own a Squadron as well. Its called "Skipper der Tafelrunde" [SdTR] you can find it at inara (not all cmdr are inara users) we would like to have a minorfaction as well, but as we realised, it seems, that we cant start a new minorfaction in Colonia. In this case we would ask if there is any way to support Explorers Nation, or be a part of it with our squadron in Colonia. we checked inara and we have seen, that there is only one xbox comander of Explorers Nation. maby we could reinforce the Explorers Nation in "down under". if you are interested you can add me at xbox live. my gamertag is noonian.