Zaphod Beeblebrox IV said:
Ship hud is still not fixed. It is less broke but still not right. I can line up dead square to the slot and the station hologram is at an angle.
Click to expand...

That's not how it works. Align it to the ship, not your head.

D.D.Hariman said:
Nothing in here for me except between 15 hours and 2 days of not playing the game while it is "sync files" .
Yeah, you read it right. 15 HOURS to 2 DAYS. IT is flickering between those two numbers.
It is Saturday here in the USA. I live in a rural area. I do not have free, unlimited high speed internet. No one around me does. We are all on cellular system based internet plans and like all cellular systems, as the number of people on the system goes up, the speed they get goes down. And it is Saturday so almost everyone is at home using the internet so the system is running under 200 kbps.
Click to expand...

I know exactly how this goes. If you have a friend that has great internet, or if there is a location with decent public WiFi and you have a laptop/netbook, you can update the game either on the laptop or on a USB drive. If using a USB drive, ensure it's a fast one because Elite does a lot of small data writes. At the location with decent internet (i.e. 10Mbps) run the launcher. When completed, you can copy just the specific game subfolder back to your home machine. Nothing is lost as all your configs are saved in the User folder.

I still do this with the big updates. Corsair Survivor USB 3.0 drives are my choice pick (64GB ~$20 @ amazon, 128GB ~$30 @ amazon with sizes smaller and larger available in silver and black). Use a speedtest app on your phone to locate prime spots for the update. And if you're using a hotspot, it makes it even easier as you can sit in your car while it updates. Just note car battery power use if engine off and fuel consumption depending on the day/time as you don't want to get yourself stranded late-night

Playing this game is TEDIOUS!

Transport 500 first class passengers? Have they released a new ship that is capable of fitting enough first class cabins to actually do these missions?
-
-
- 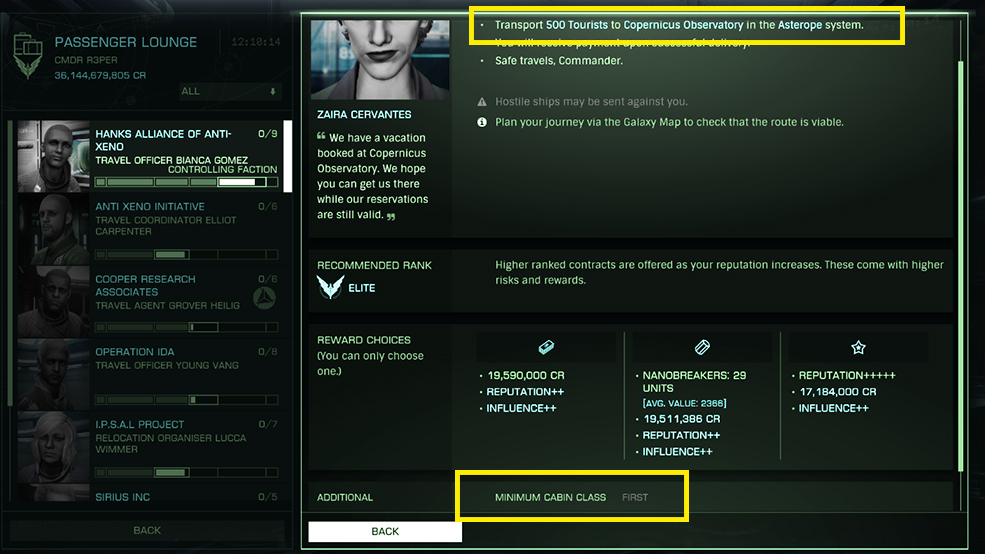 r3per said:
Transport 500 first class passengers? Have they released a new ship that is capable of fitting enough first class cabins to actually do these missions?
-
-
-
View attachment 146794
Click to expand...

I think they’re gearing up for FLEET CARRIERS.

r3per said:
Transport 500 first class passengers? Have they released a new ship that is capable of fitting enough first class cabins to actually do these missions?
Click to expand...

Yeah but at least there's no more softlocks on mission menus

r3per said:
Transport 500 first class passengers? Have they released a new ship that is capable of fitting enough first class cabins to actually do these missions?
-
-
-
View attachment 146794
Click to expand...

AveCandido said:
The connectivity problems are yours or your internet server ??.., you may have inappropriate ping and latencies for Elite. Remember that w7 no longer supports and w10 supports even when not registered (watermark). Connection management is not only Frontier also your operating system (windows, linux, virtualizations, others). Although to see a web page it may be correct for other things you need something and therefore does not let you access.
In addition, those who play with VPN, that there is, if it enters, the configuration of Frontier server also, for security issues that do not correspond to explain here.
Click to expand...

Windows 7 worked fine though I have a copy of Windows 10 I will be installing this weekend on a spare SSD. Will reinstall the game and see what happens. Prior to September 18, 2019, ED worked great. After the September 18, 2019 update, its ED is a broken game. Something changed within the September 2019 update. All my other applications I have (Adobe, Firefox, Fallout 4, STEAM, MS Office, and of course, MS Update) work fine. Tell me how to adjust latency and ping latencies an I will try it.
Last edited: Oct 8, 2019

Cannot collect salary or turn in vouchers to power contact.

yes, between these multi-million credit donate missions aka 50mil and nifty passenger missions 320 to 500 passengers both of which we also can't accept, not that we would accept even if we could seems the programming glitches continue.
But is also reminiscent of the 50mil cargo delivery missions once introduced.
So to repeat myself again, as a programmer its difficult to imagine that the updates are done on one computer, and the original program sits on another computer with each and every bug ever created still present and then some wise-acre takes a copy of that and puts it on a server then copies and pastes the updates into it.
No experienced programmer worth anything does this, I know, but then why does it seem like this is exactly what fdev does???

the continual freeze up of my modules screen is annoying but the above is making various aspects of the BGS play near impossible.
also, from what a few others have noted, yes very much the modules tabs ability to set power priorities is currently a waste of space, so again another old bug is alive and well once more.
I am picturing a view of the programming room at fdev filled with ex-Microsoft non-English speaking mechanical engineering grads trying to find the 'fix' key on the acorn. while the janitors are huddled in a corner giggling at each other
I'm starting to believe that the janitorial crew is messing with us whilst fdev appears to be on a holiday and are in no rush to return to their collection of flailing disaster of what has been on numerous occasions a great program/game.

It would be nice and slightly reassuring to hear a word or 2 from someone in charge of something besides coffee and cleanup that there is a certain amount of sorrow and apologies for the continual failings, bugs and glitches that continue to crop up, after update, after patch, after patch.

Maybe let us know which vacation spot the good programmers are currently inhabiting so someone might drop them a line to see if they are enjoying their time off.

As much as I would hate to see the losses and other changes that we would all suffer, this is one time that I would vote yes, for a total rollback to pre-update, pre-arx
Because for one thing, all I see now is patch 3 = more bugs, patch 4-10 = more bugs. but arx will eventually be the entire and only thing working properly.

And the Beefeaters actually grinned.

Jethro49 said:
Yeah but at least there's no more softlocks on mission menus
Click to expand...

I don't know how often I have to request this, but it would be real nice if you guys could see if you can actually reproduce this.

I'm impressed, just found a 500 passenger mission that tried to populate my 72 cabins as well as the entire screen but sadly they just couldn't squeeze the last 428 little red men into the hold.
Honestly thought the game and my computer were going to blow.

krautbernd said:
...there are though?

I don't know how often I have to request this, but it would be real nice if you guys could see if you can actually reproduce this.
Click to expand...

I did reproduce it and replied to you here.

The reason for the errors is banal and can be explained in one word: Greed.
Why the greed? Because arx was included in the game.
"..Nothing personal – just business!.." ©

Meresiga said:
The reason for the errors is banal and can be explained in one word: Greed.
Why the greed? Because arx was included in the game.
"..Nothing personal – just business!.." ©
Click to expand...

I have to agree, if the ability to get Arx from playing the game hadn’t been written into the code then it is probable that the bugs would have been confined to fewer aspects of the game, it is all down to the greed of the players.

Meresiga said:
The reason for the errors is banal and can be explained in one word: Greed.
Why the greed? Because arx was included in the game.
"..Nothing personal – just business!.." ©
Click to expand...

Because it would be greed, if the paint and skin store already existed from the beginning .... by 2014 and the only difference is that now you can get something when you play many hours .... I do not see that statement, I do not agree

aRJay said:
I have to agree, if the ability to get Arx from playing the game hadn’t been written into the code then it is probable that the bugs would have been confined to fewer aspects of the game, it is all down to the greed of the players.
Click to expand...

nonsense.... earning skins and decals etc has been a staple of long term goals for videogames for decades. I paid more to FD for Elite D than i have ever paid for any other game so to suggest wanting to earn skins in game is me being greedy is plain wrong.

Earning Arx to buy skins is not actually what I really want but it is the only option on the table at the moment. For me it has everything to do with giving me in game goals and nothing to do with greed.

Hell even as a LTP owner, hypothetically if FD released a £50 DLC which added all skins, kits and well basically all cosmetics to be earnable in game by doing different in game tasks.... I would pay it (so not earning arx but for instance giving every npc faction a different skin that we earned by doing stuff etc) I would pay for that, and yet as it is now, FD wont get another £50 from me for skins no matter how long the lifetime of the game is. A cosmetic earned by real cash means nothing to me, I have not even bothered to put on some of the skins i bought 18 months ago because they were not earned... Had i got them through gameplay they would have been equipped immediately.
You must log in or register to reply here.
Share:
Facebook Twitter Reddit WhatsApp Email Link
Top Bottom