One of the things I always look for is "hot jupiters". This one isn't by any means the closest to the star that I've seen, but it's always nice to spot one while scooping, and be able to get a screenshot with the star in the foreground. I also love those Gas Giants up close to the star as I don't see them too often. This class V was about 3LS from the main star.

The images shouldn't be blocked. At least they're not at the server end. I can't say if you have any sort of content filter on your end though. I've been blocked before by filters that some companies use in their offices.

Yes! Everything ok with VPN! In Russia we have some problems last 6 months... Thanks))

Klepto said:
Yes! Everything ok with VPN! In Russia we have some problems last 6 months... Thanks))
Click to expand...

You're in Russia, that reminded me that I had some anti-spam rules that might also be affecting the webserver. Take a look again, and see if the images are showing up now.

I always love stumbling upon giant stars. Scanning a "small" red star from the entry point isn't unusual, until I realized I was scanning one from 23 kls away (with a fast scanner, not long range). Obviously it had to be a red giant. I don't run into those as secondaries like this very often. Found a landable HMC which has something that looks suspiciously like a polar ice cap:

And if I'm not totally mistaken, the surface really is different (sound, dust/particles, traction) on the icy looking part.

No sure if it's any special, but I like the layout of this system. 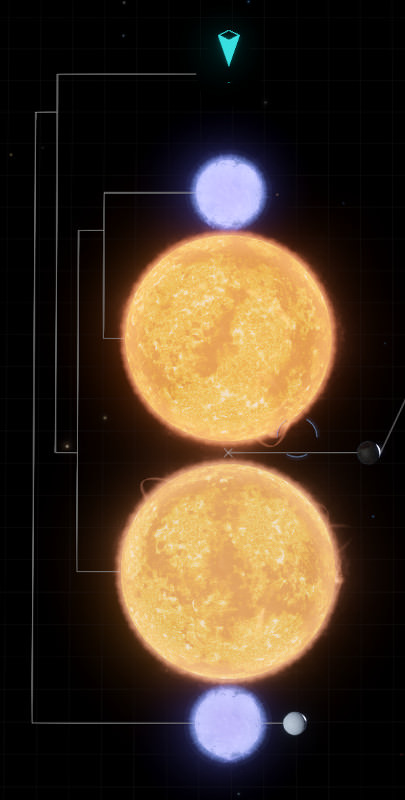 LifesAJourney said:
No sure if it's any special, but I like the layout of this system.
Click to expand...

I love those kinds of systems too. You're just missing a black hole at the end for it to look like palindrome. Well, that and the extra planet down there.

A neat find, I thought. This is a system with a single neutron star (no secondaries), and yet it had an ELW in binary with a water world, and another binary pair of water worlds.

I hadn't played around much with the payouts on the new mapping tags, so I made a point of mapping a fair amount of this system, with an ELW and three WWs. I mapped the first five planets and their moons, which included all of those high value targets. Only one of the WWs was terraformable though. The payout was over 8M for the system. 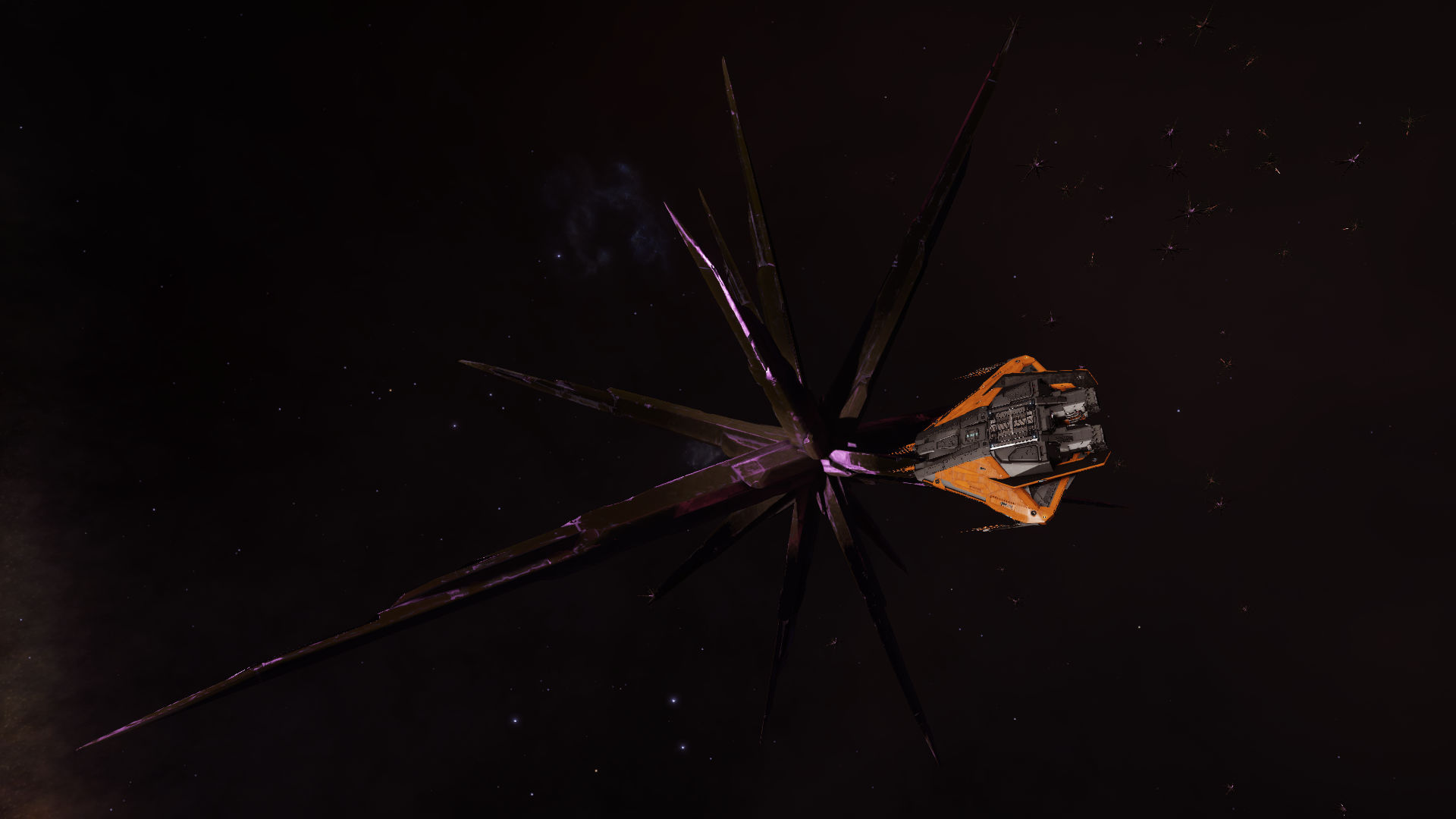 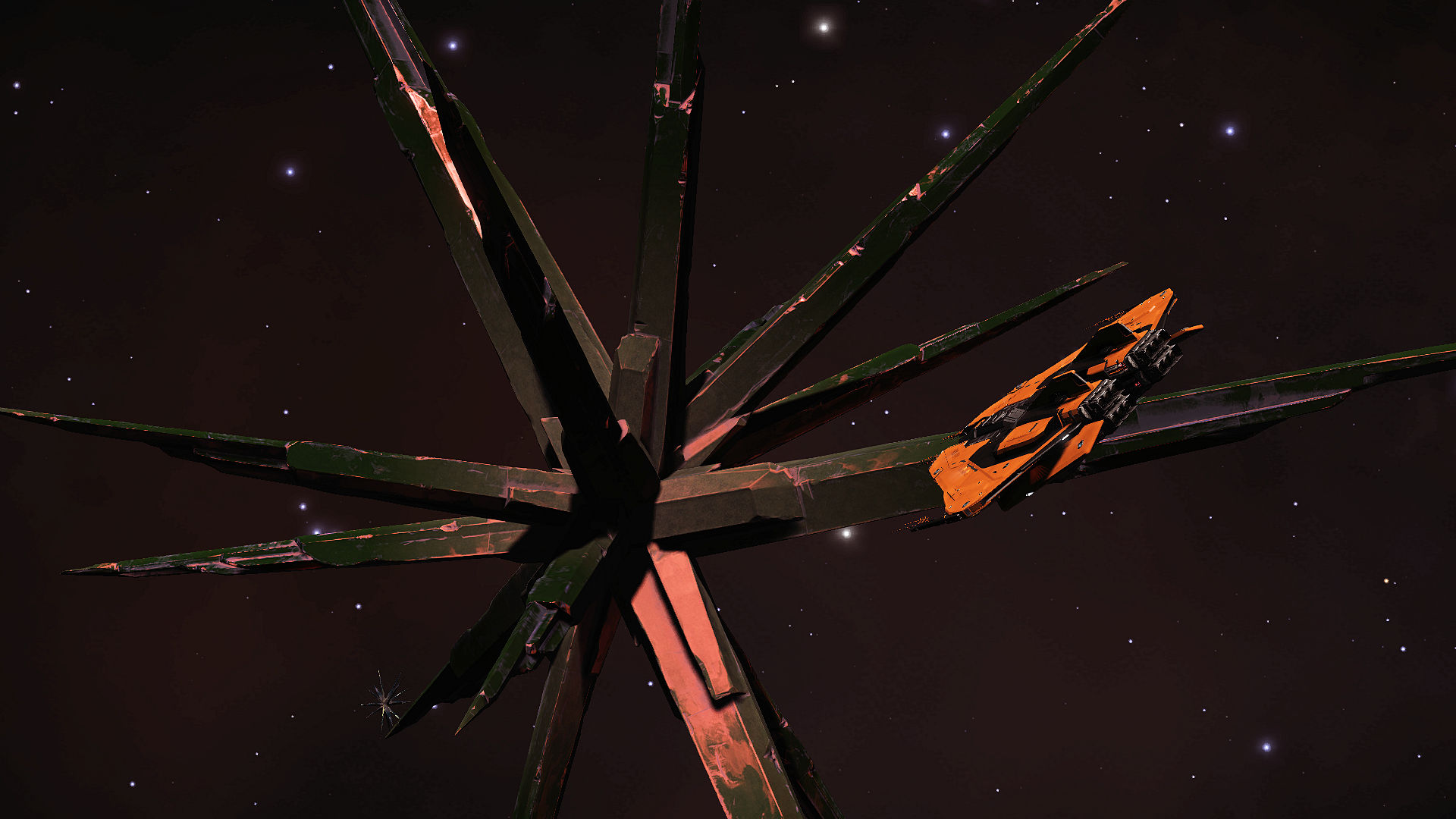 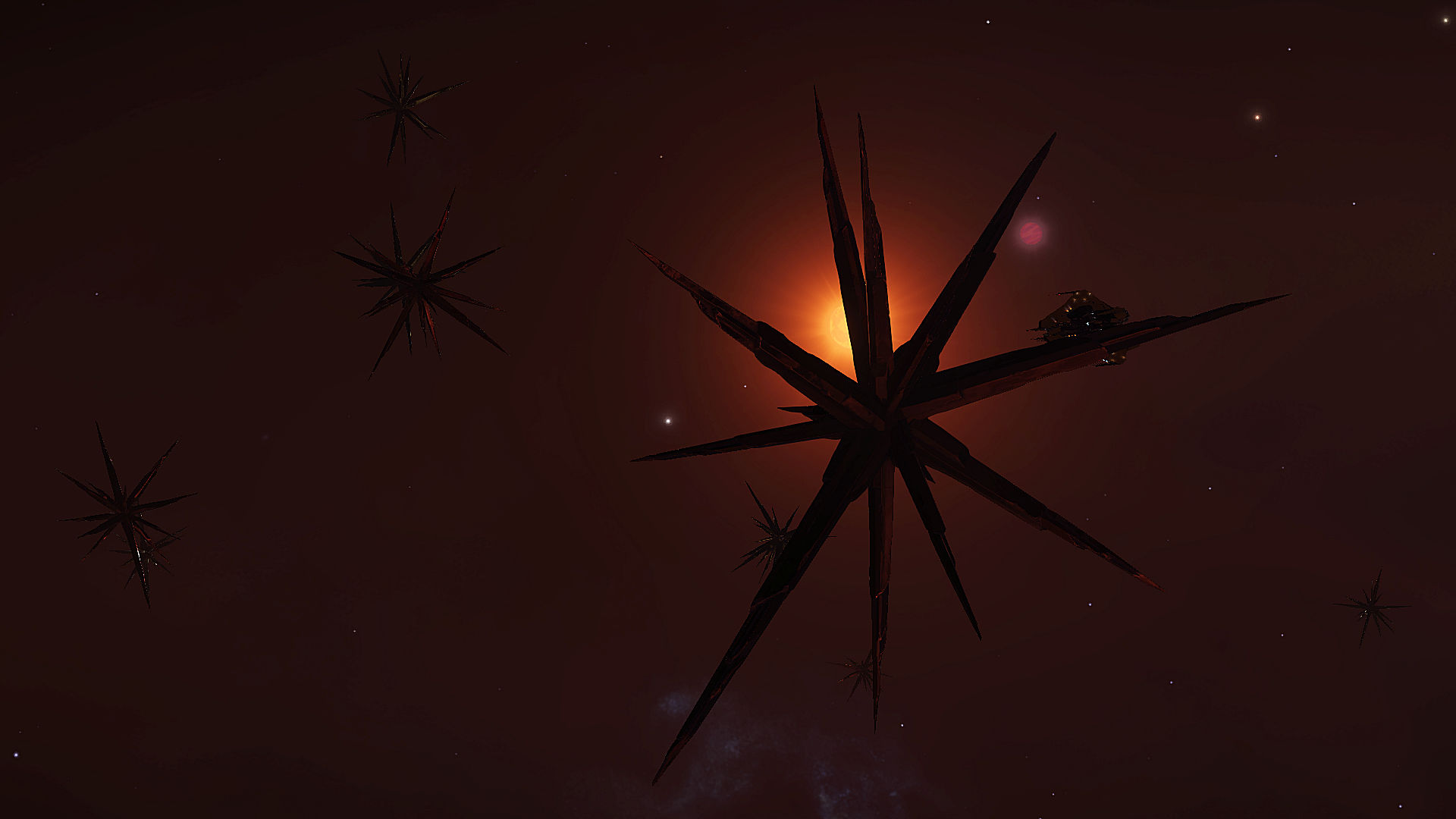 Squashed Gas Giants that become more Egg-Shaped are something I have seen quite often, but seeing it happening to a planet like this is new for me 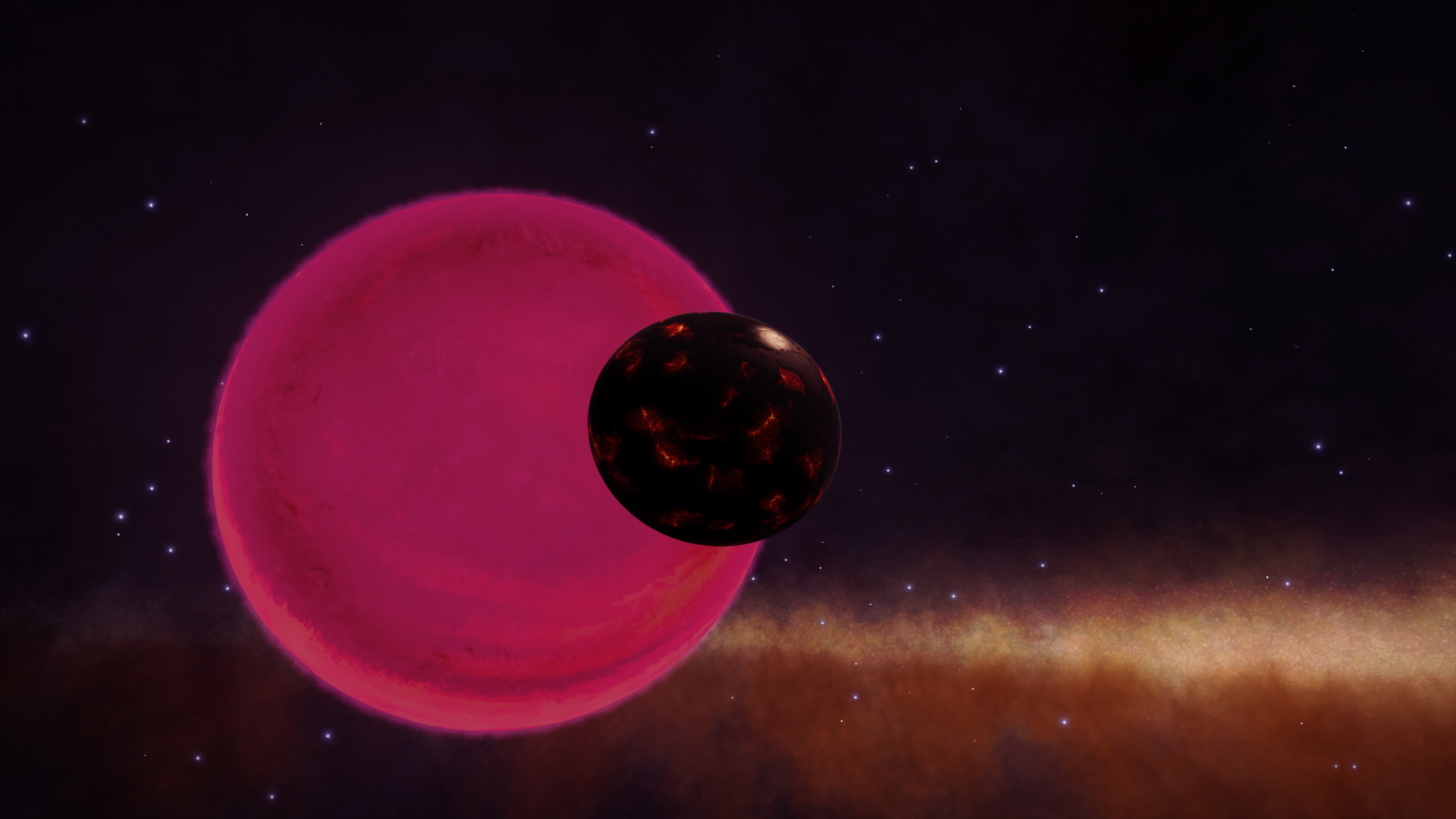 Not exactly Spectacular, But its a bit of a trippy system to fly about in, I'ts quite high above the galactic plain & The view near the 3 central singularities can get a bit mind bending looking back at the galaxy. (Have blanked out the system name intentionally as I'm outbound into the black again & wouldn't mind getting my name on it ect. Would make a nice POI tho as its only 6000 ish Ly from the Colonia Bubble.) I wouldn't have like to be in that system when all 4 stars went nova at the same time.

Hey, that's pretty cool. It's not often that you see a system of multiple black holes, and nothing else. 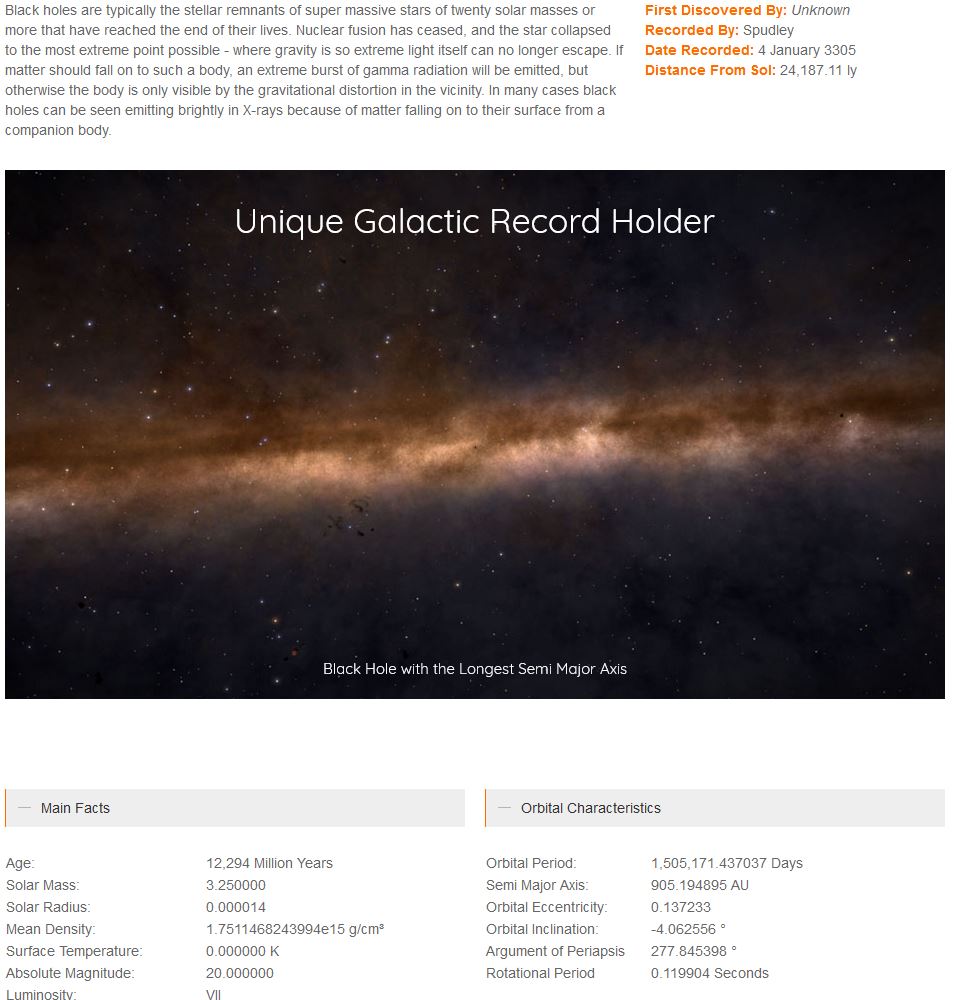 Sometimes it is the little things that make me smile. Buckyballing home I just happened to pop open the wave analysis while scooping a humble little M just outside the bubble...Yeah, it surprised me too 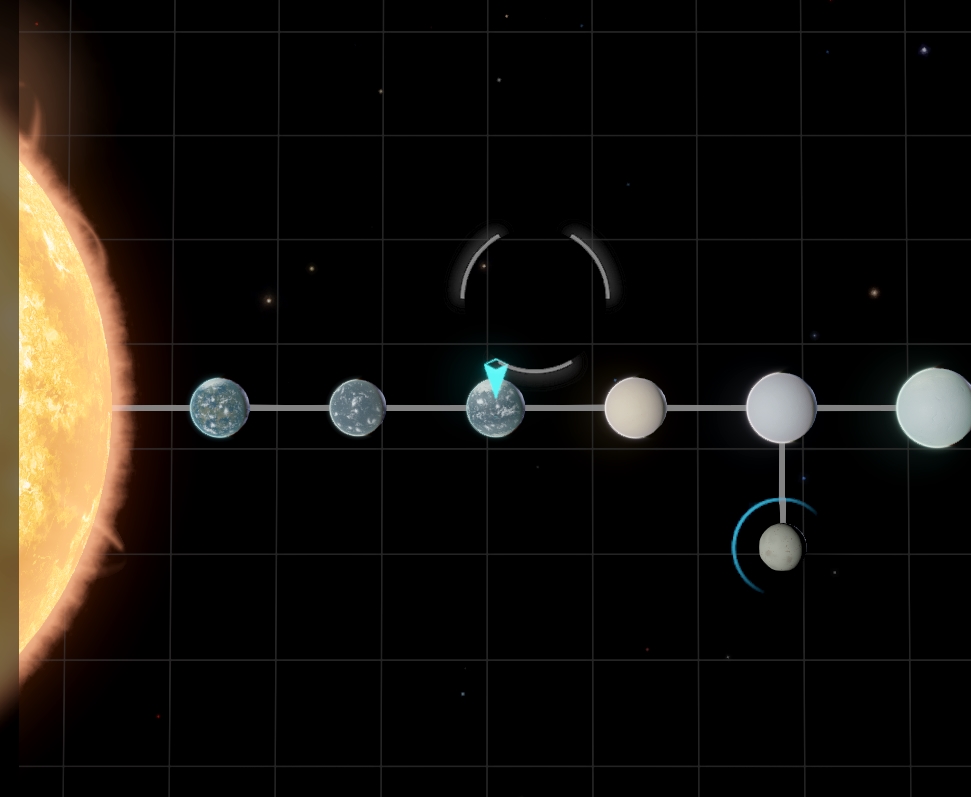 My first ever up-close examination of Geologicals was in a quite spectacular place: a narrow sheer-sided canyon barely wide enough for the Asp to squeeze down into and find a landing spot. Needless to say, while I did land, I didn't dismiss the ship, because if it took off and landed again back up on top of the ridge, I'd never get up there. 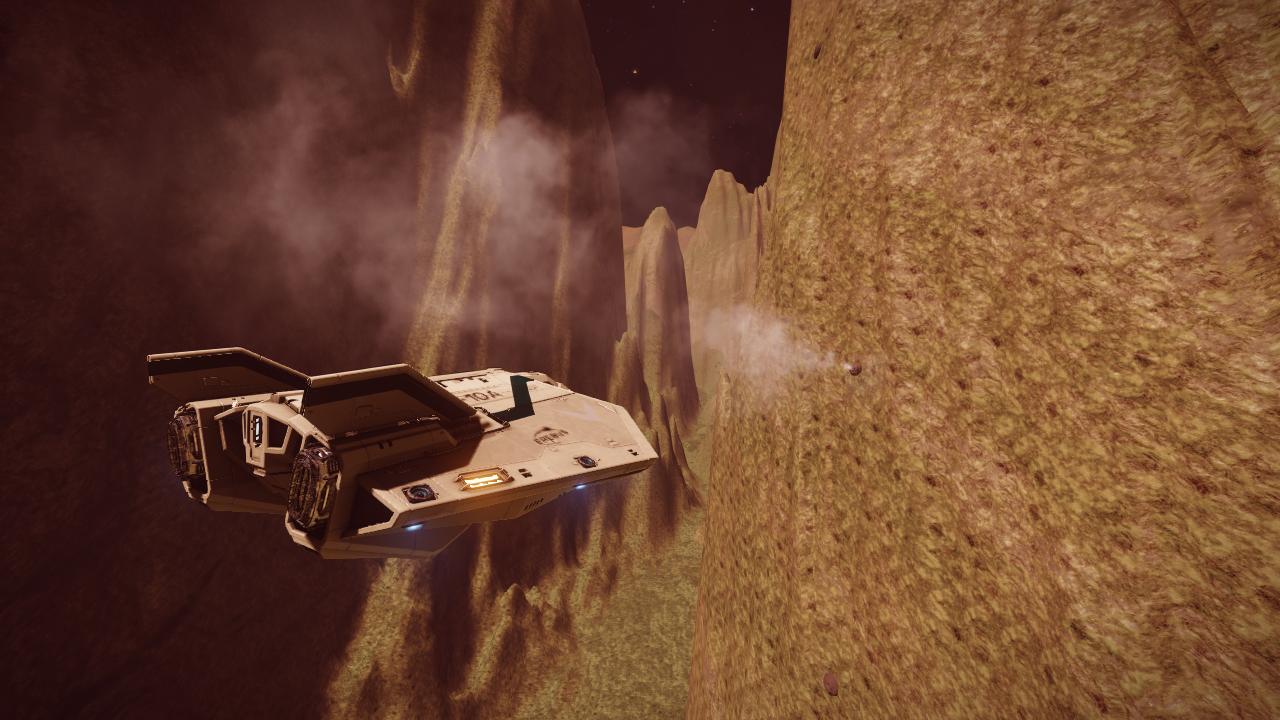 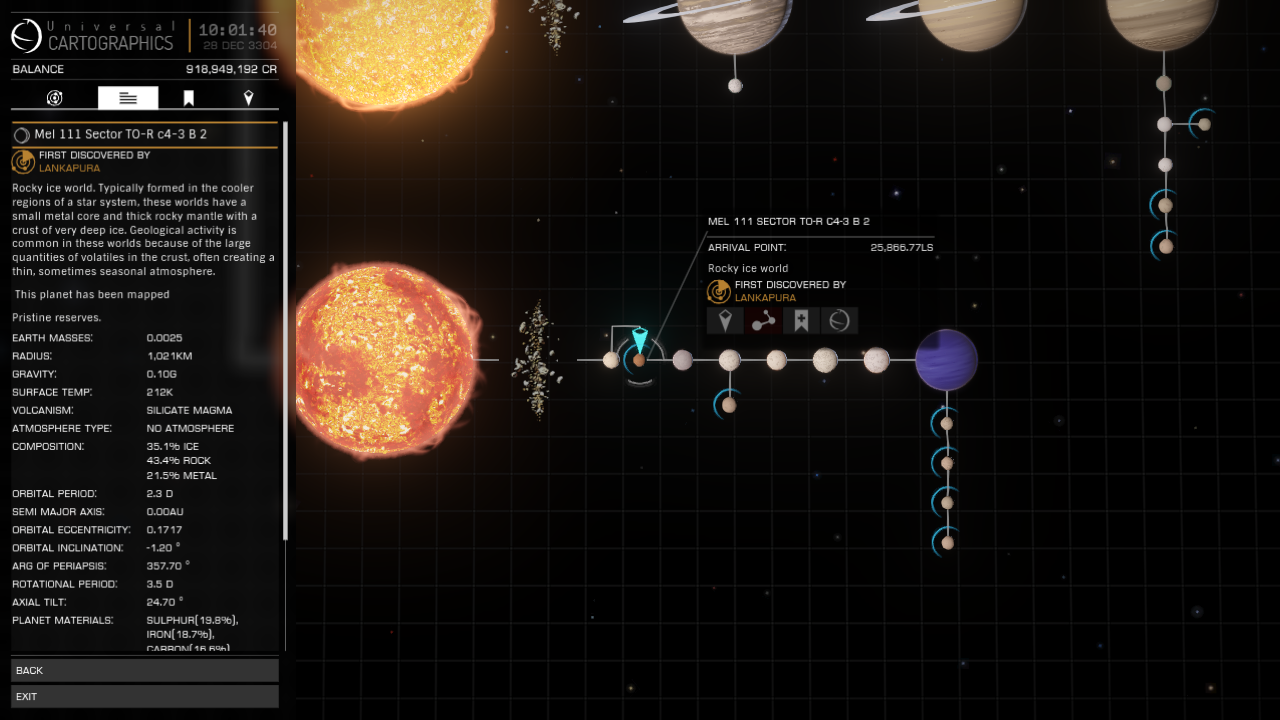 My first Biologicals site was some rufous braintrees on this little moon, orbiting rather close to its parent planet. They offered some spectacular backdrops while fungi-farming. The brown dwarf the planet orbits can also be seen setting here. 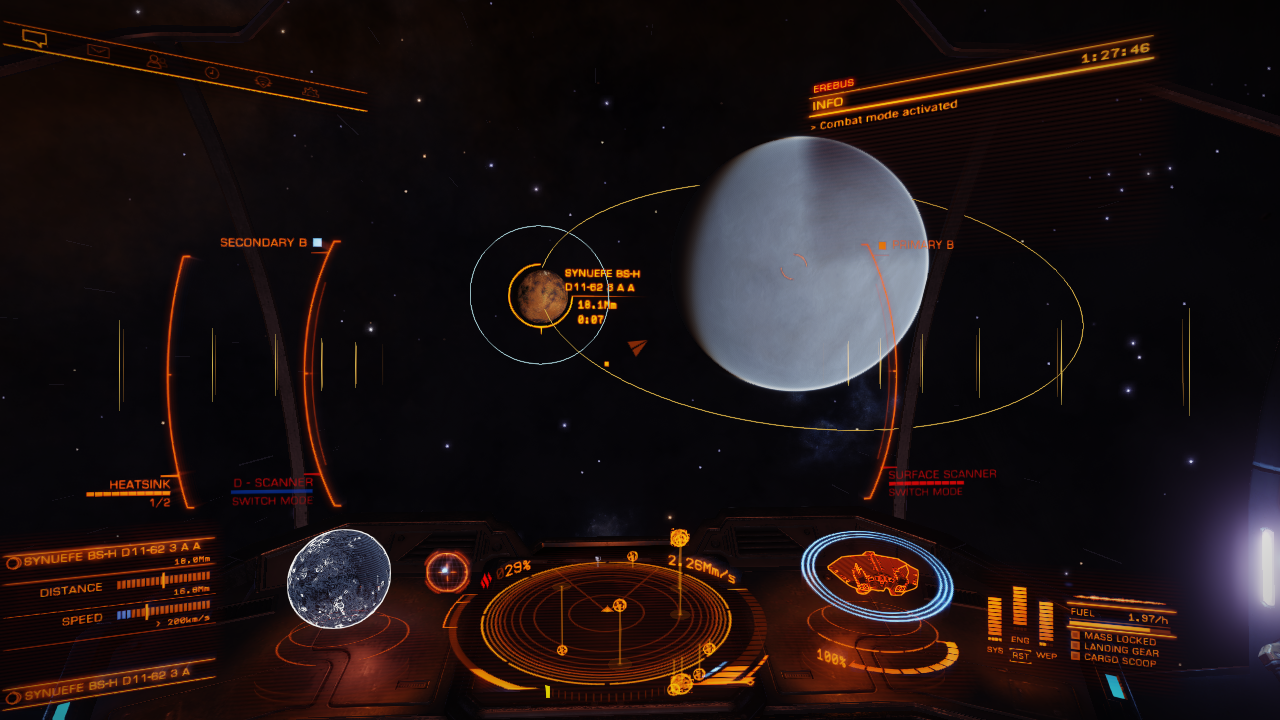 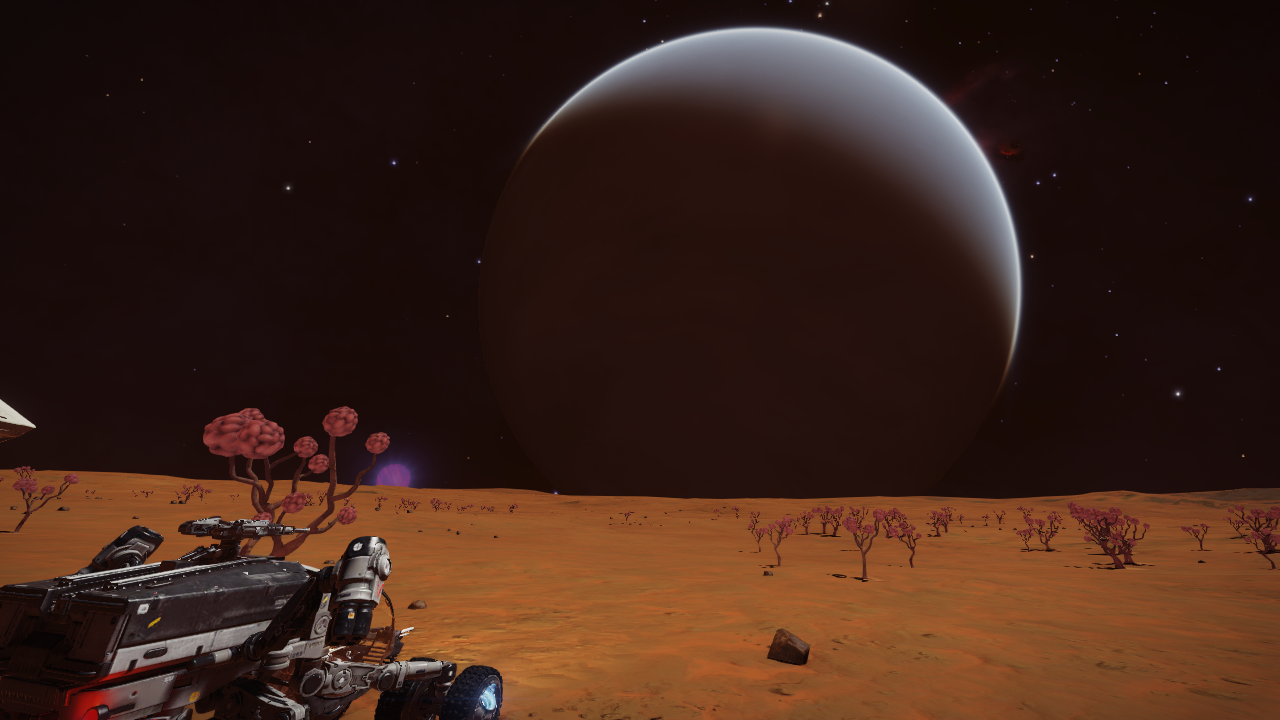 And finally, another highly oblate molten ball of rock orbiting perilously close to a L-class brown dwarf, not entirely unlike Bomba's example on the previous page of this thread. To clarify: these worlds are not "egg-shaped", like a world would become IRL due to tidal stretching: ED doesn't model tidal stretching. Rather, these are the opposite of egg-shaped: "squashed-ball" shaped, because they're rotating so fast. 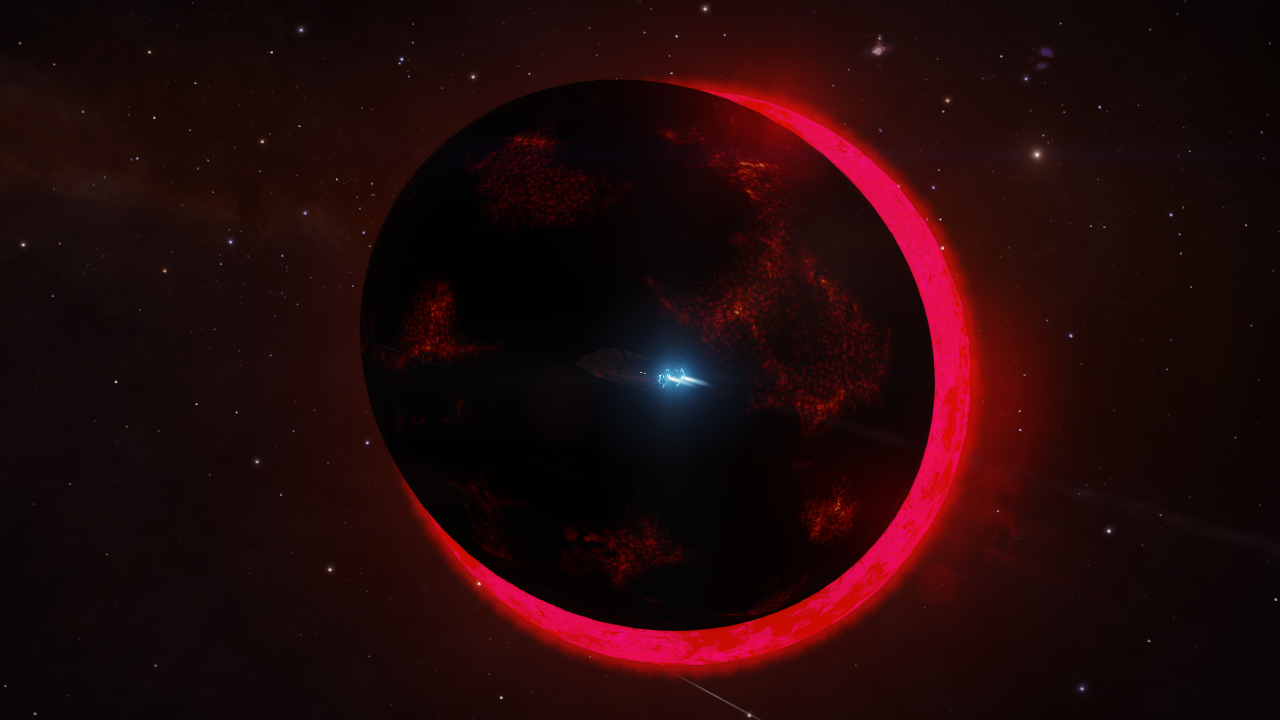 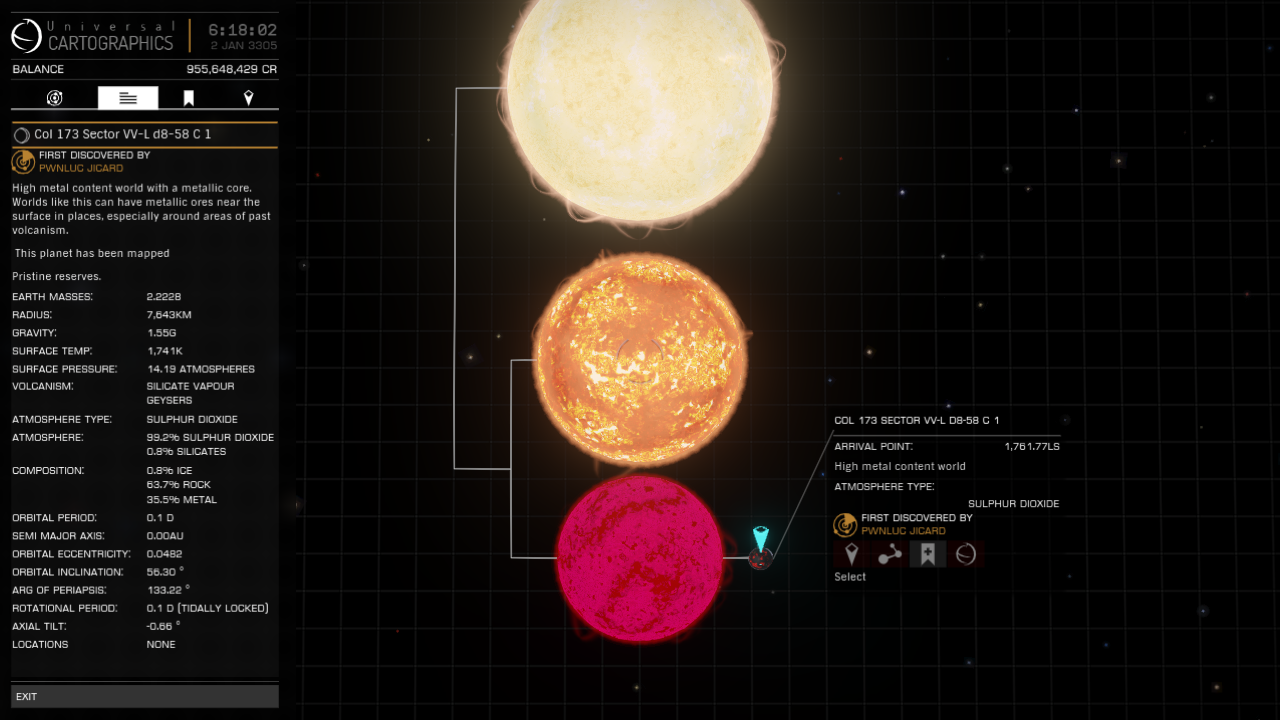