Black hole, white dwarf and 5 neutrons. And 9 metal-rich planets.
...now i need a short brake to figure out what is orbiting what 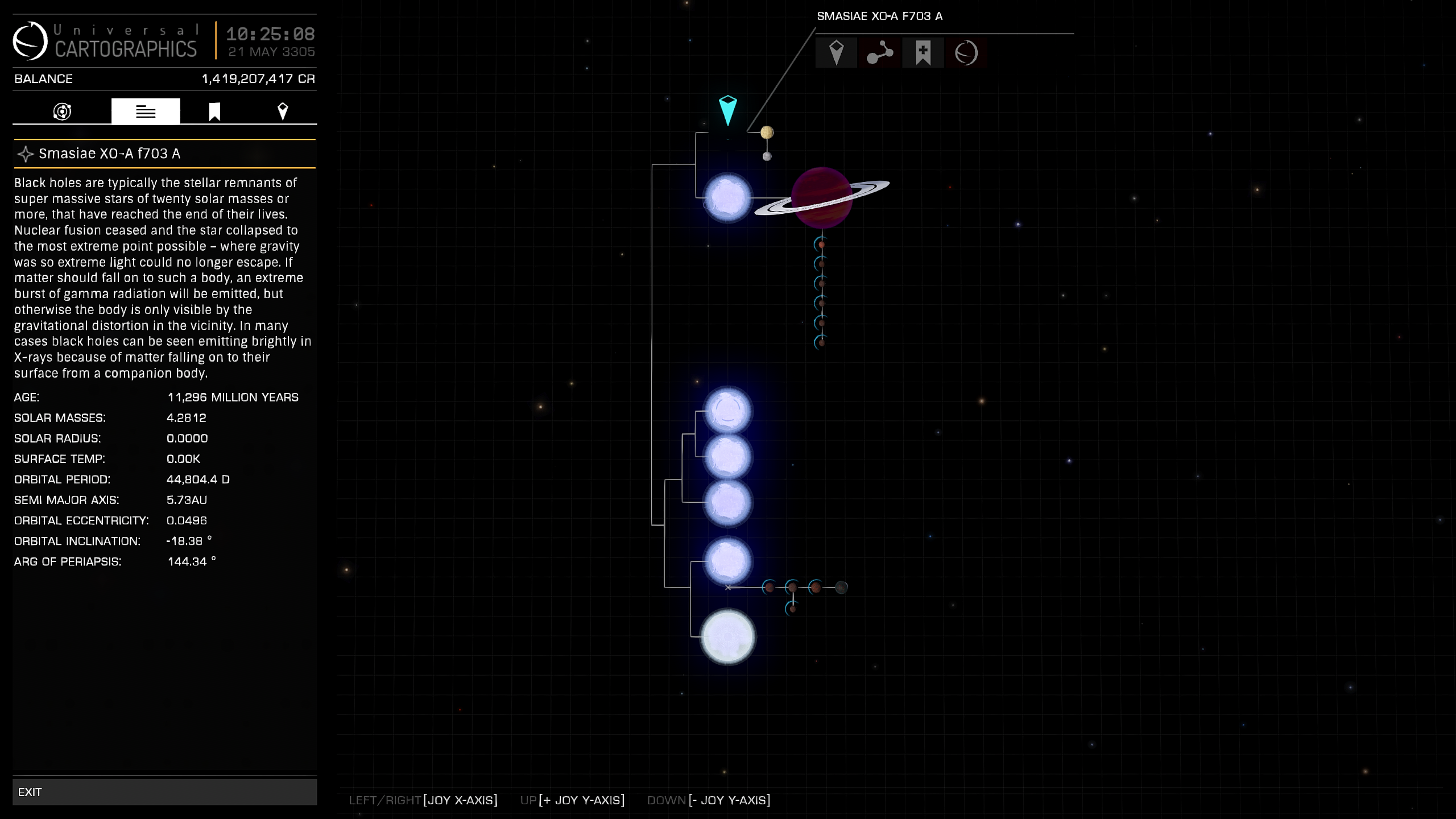 Pirin said:
Black hole, white dwarf and 5 neutrons. And 9 metal-rich planets.
...now i need a short brake to figure out what is orbiting what
Click to expand...

Pirin said:
Black hole, white dwarf and 5 neutrons. And 9 metal-rich planets.
...now i need a short brake to figure out what is orbiting what
Click to expand...

I really love those kinds of systems. Cool find!

M
Completely random find - this system is nuts! Found a system with five Helium Rich GGs in it - the three brown GGs in the companion system, the big white ringed GG orbiting the red class IV GG in the primary system, and the 8th planet of the primary (the smaller white GG).

The primary's fourth planet is a sub-neptunian Class III giant with a VERY close Io-like moon with only a 2 day orbital period. And there's a distant Brown Dwarf companion to the F V primary (I haven't seen that often around these stars). AND the 8th planet in the companion system is an HMC with a waterworld moon! 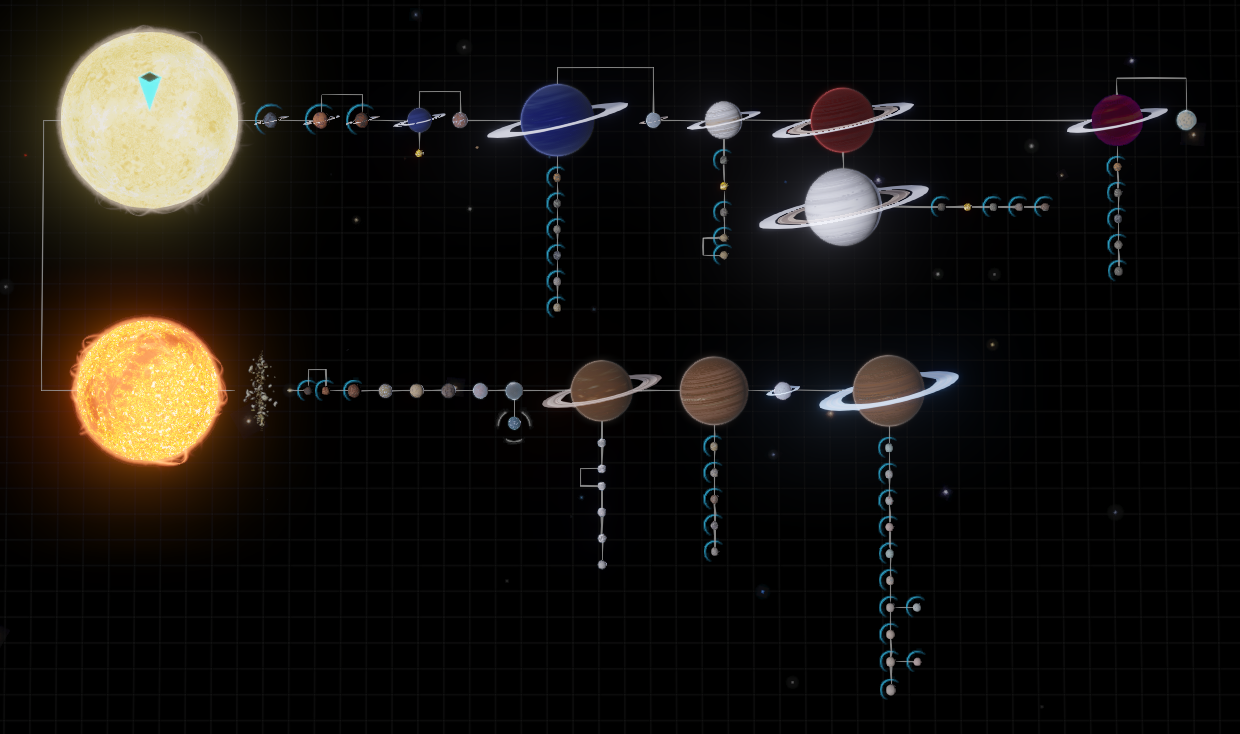 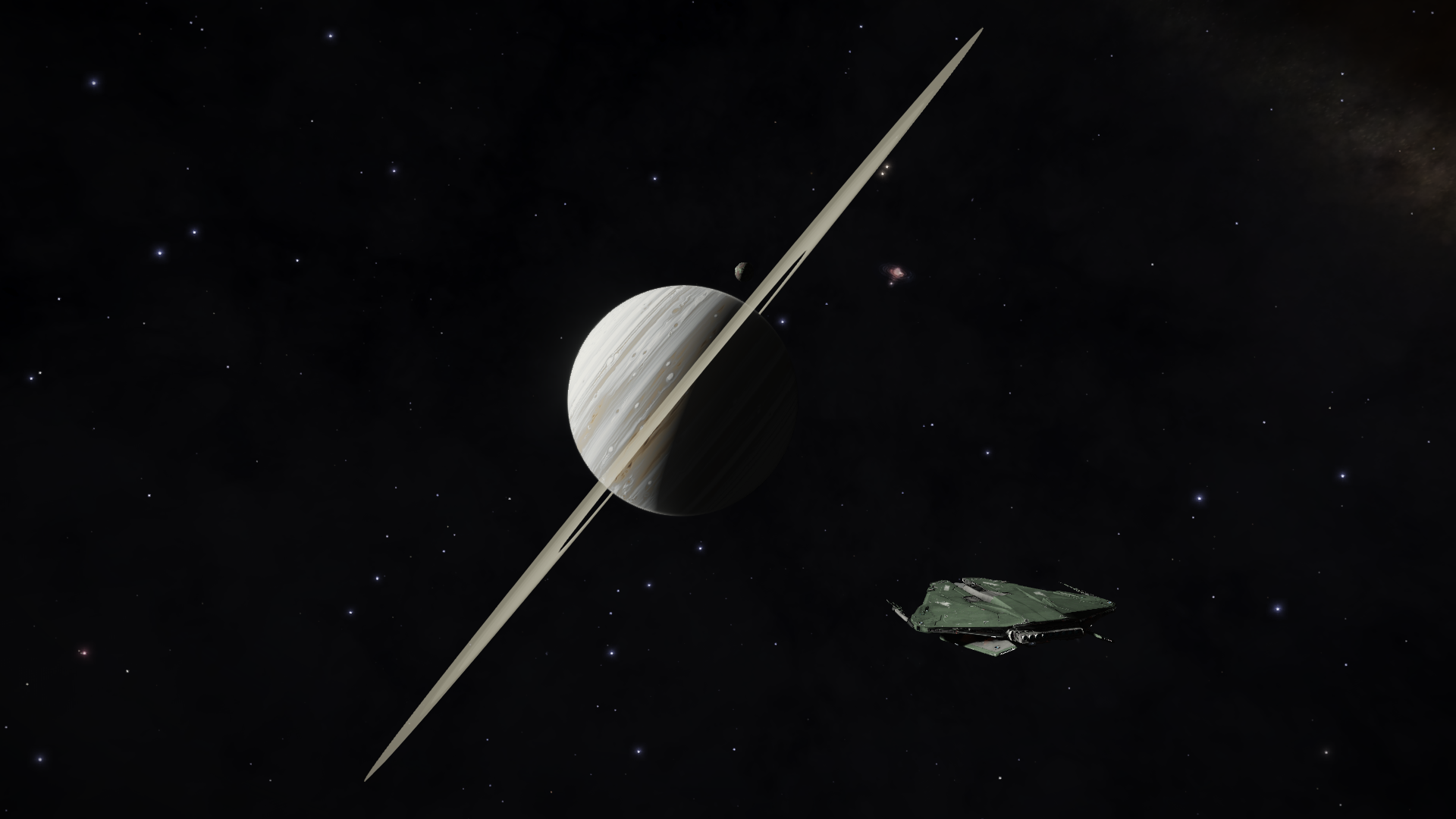 Before the "Beyond" season, I found this nice place near Colonia (system Eoch Pruae JO-H d10-347). 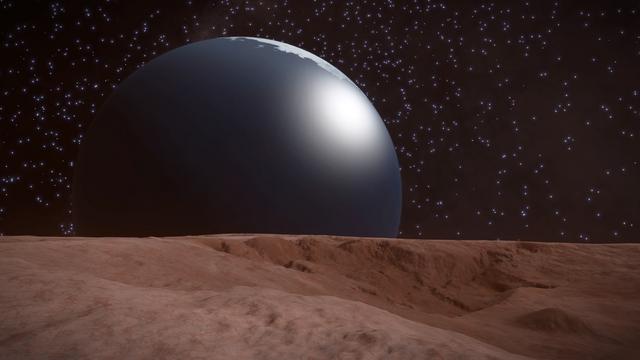 I revisited it just now, and now it looks like this... 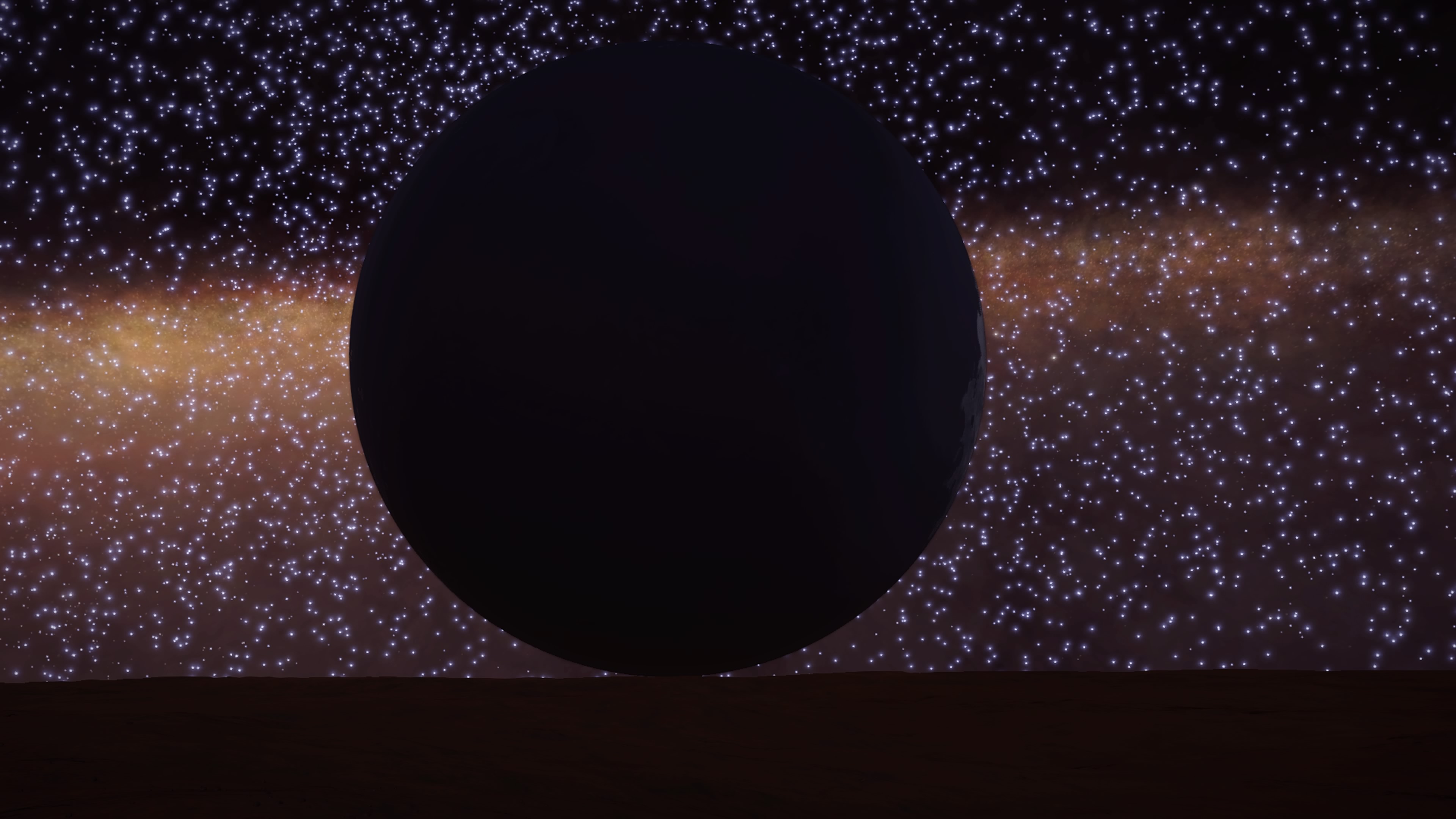 Yes, sadly, this is on the most brightly lit side.

I found a couple of catalog systems that were undiscovered (by pure luck), that also had "Hot Jupiter" gas giants (orbiting very close to the star), which are a personal favorite to look for. It's really cool when there's more than one, in separate solar orbits, but close enough together to clearly see both. Both of these systems had two inner gas giants each.

(The official definition of a "Hot Jupiter" is a gas giant with an orbital period of 10 days or less, but some of the ED planets that are a little outside of that are still pretty nifty).

(that's not a moon in the image, it's the other gas giant in a separate orbit) I stumbled on those by chance, but it's cool that these can be googled. 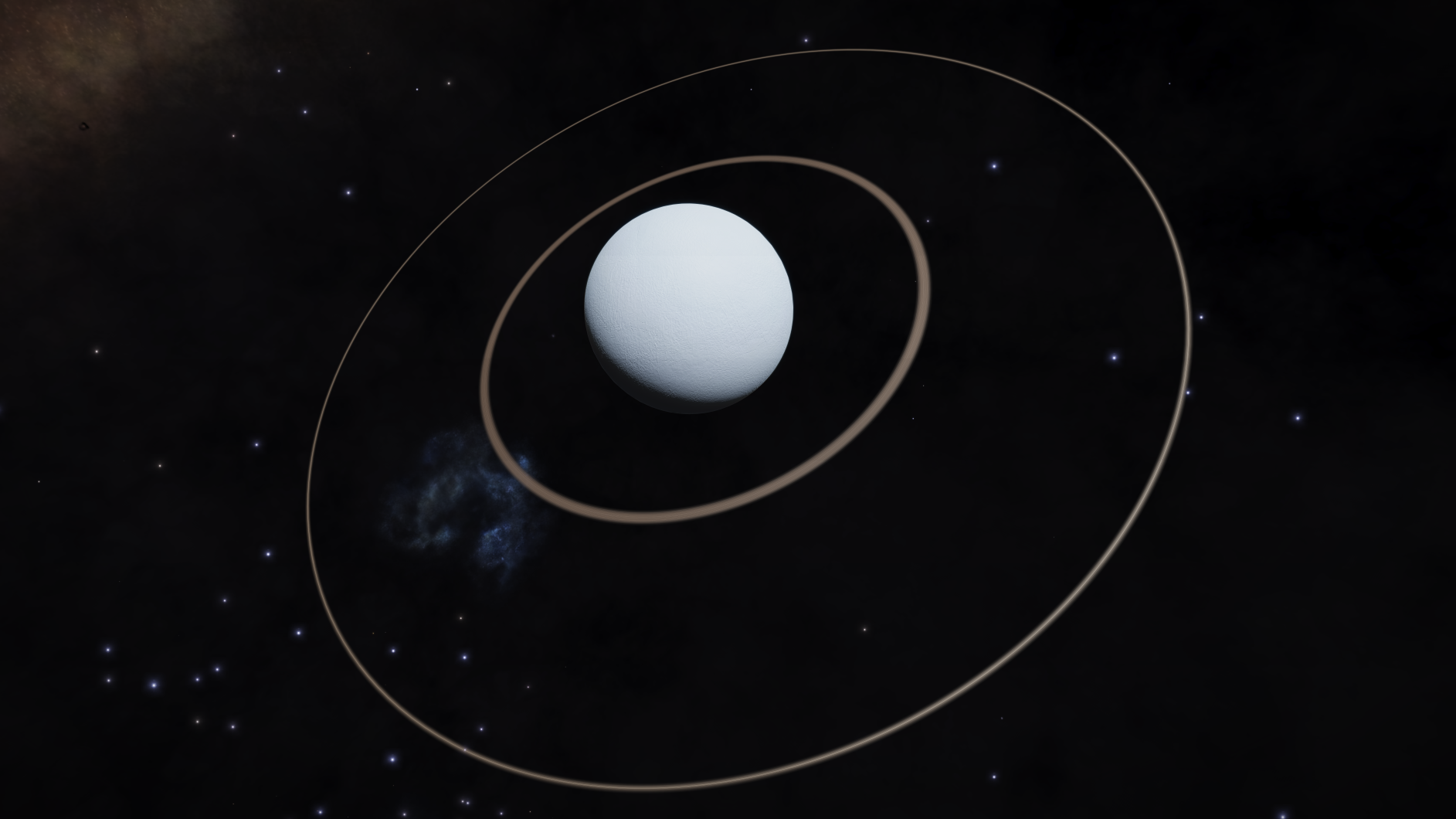 I could photograph rings all day, but I find that Icy Bodies often have the most interesting ones.

Oh, and on the topic of gas giants close to a star. I just found this one today (not registered yet, so just the picture). In the background a White Dwarf (DA), in the foreground a class L dwarf (48 ls from the WD) orbited by a class III gas giant only 2 ls away. 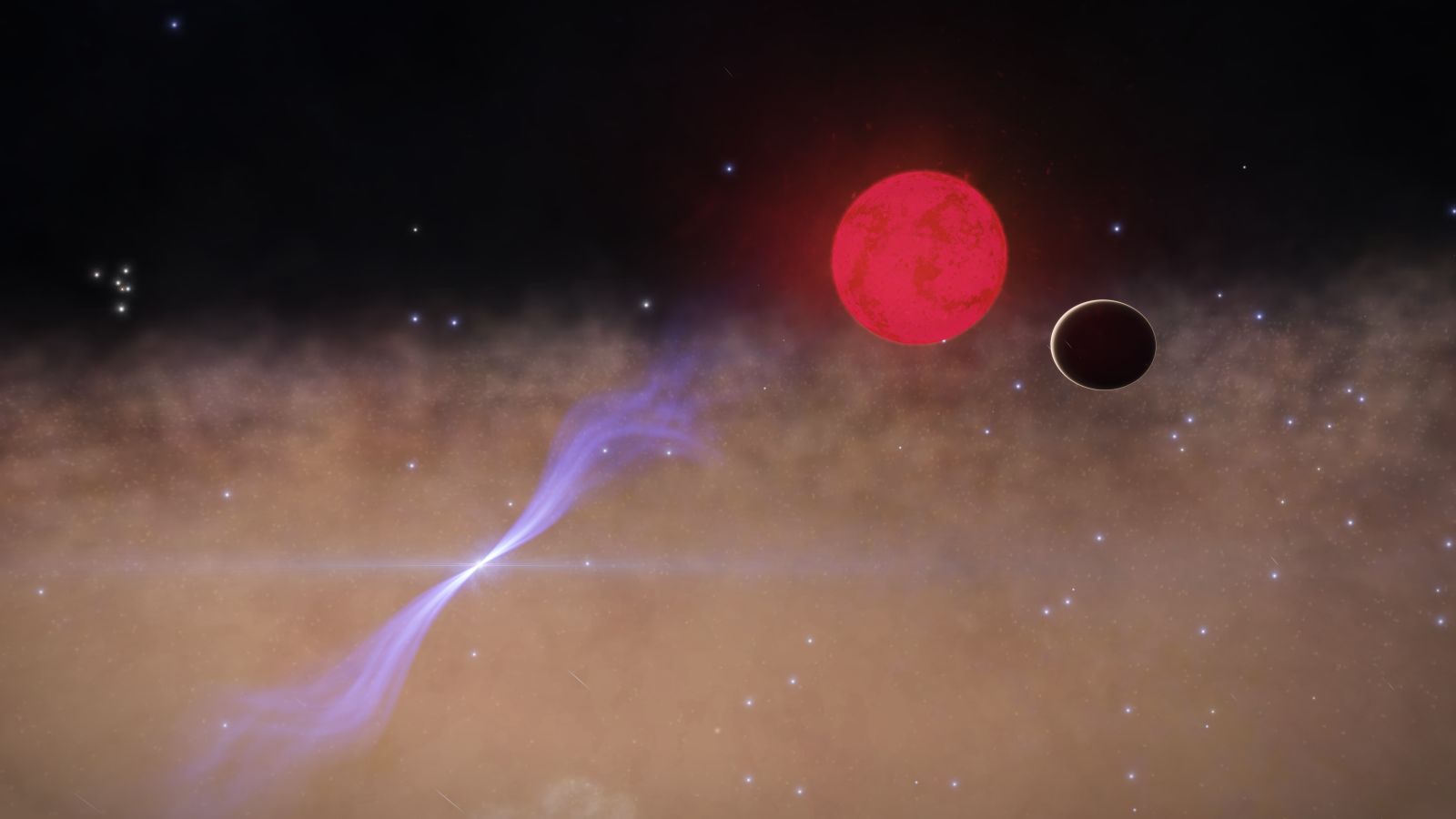 E
Found an ELW orbiting a neutron star, I can't remember if this is my first, but it's definitely something I haven't seen for a long time. 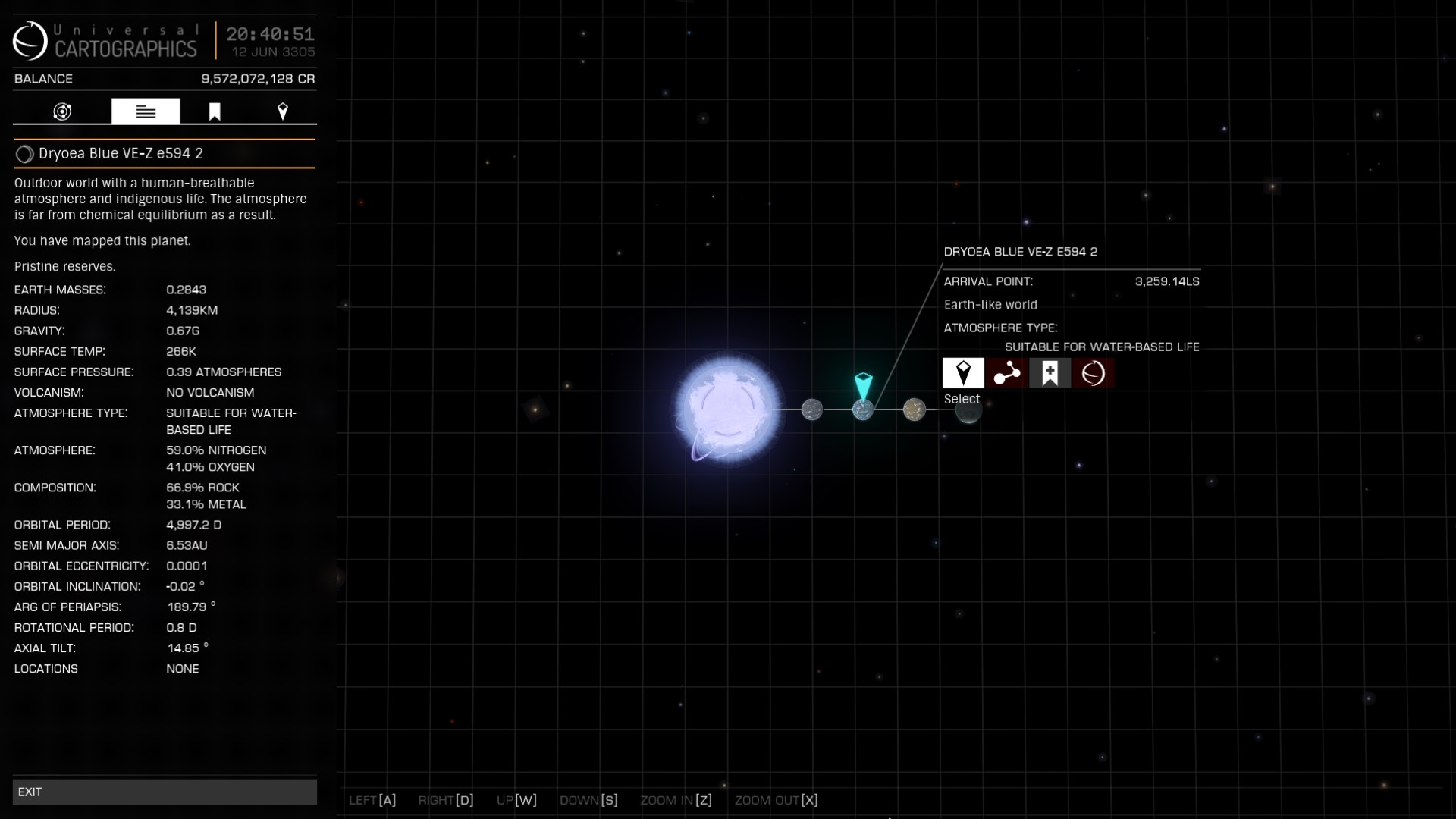 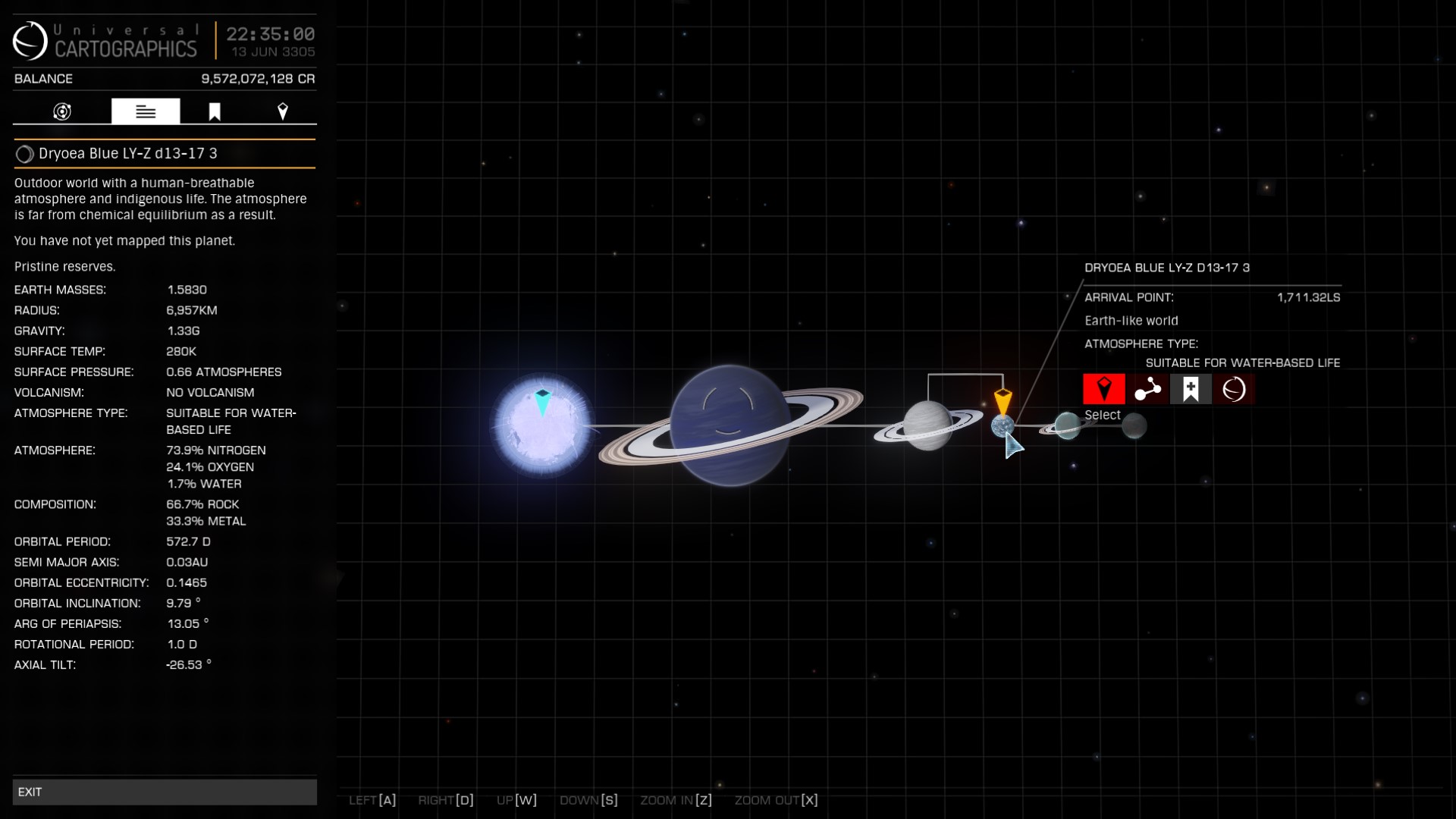 Yeah, they're out there. Not common, but they come up occasionally. I think I've found 2 or 3 of them so far.

Thought I would add some less seen pairings, in my exploration at any rate.

Pair of Red Giants and their less expansive friends.

White Dwarf with Gas Giant with ammonia based life.

Finally, Twin Herbig stars with B star and landable body. 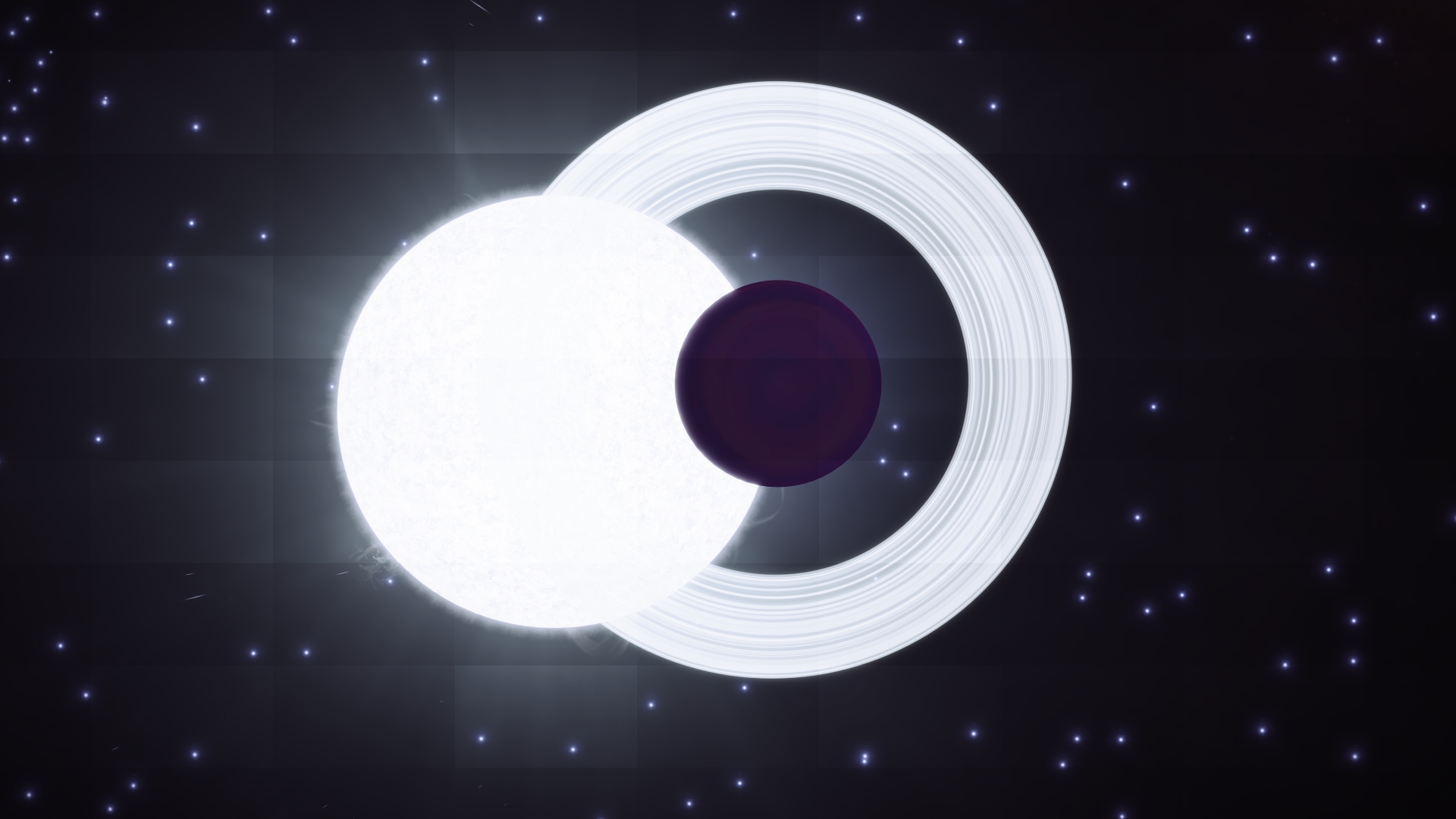 Here with the orbit line 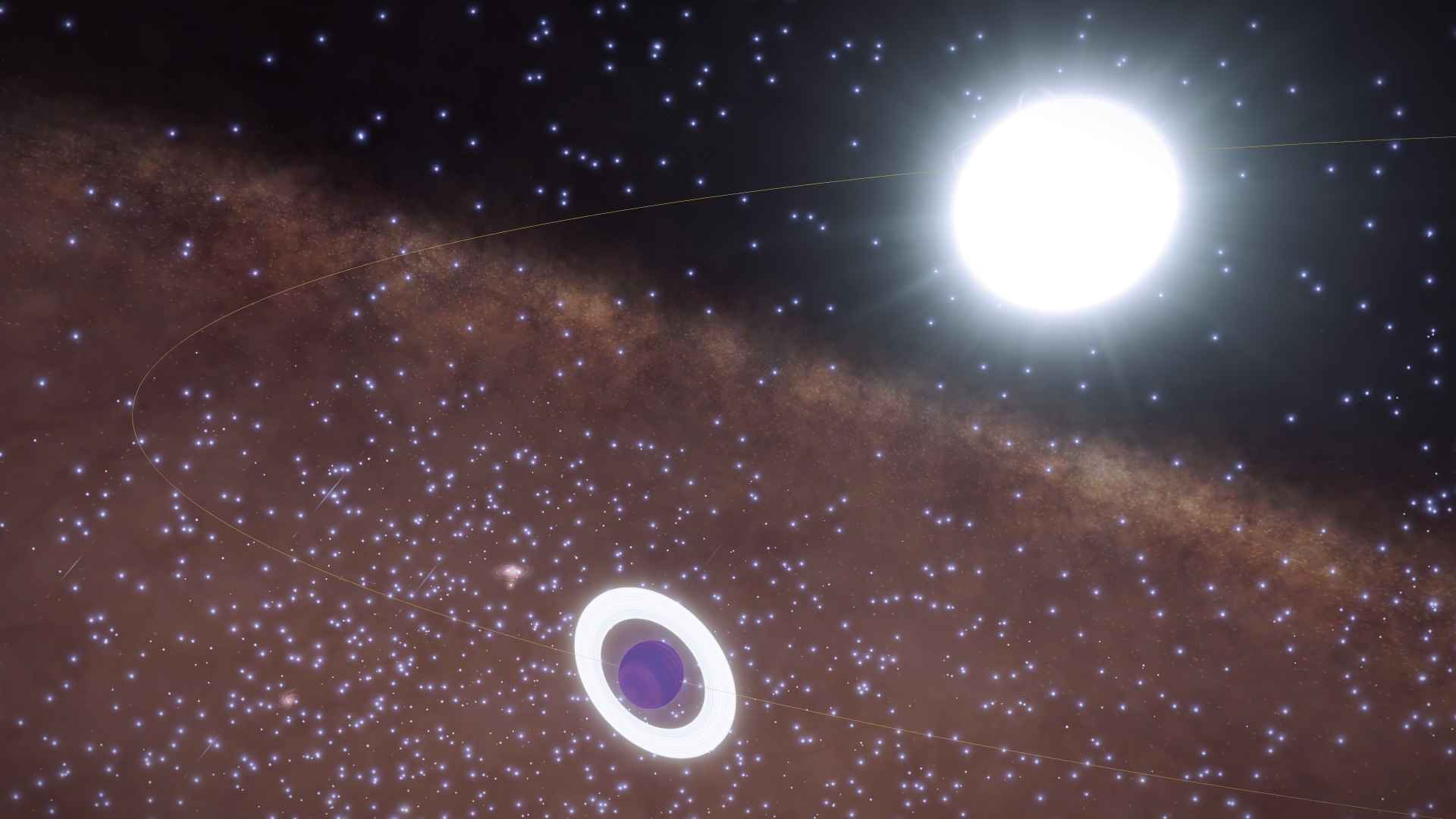 Erratic Spawn said:
Class Y Dwarf with almost vertical orientation of its rings orbiting a Class A star at a distance of about 20 ls
View attachment 135209
Click to expand...

That's a great, impossible-looking shot! (shame about the grid squares though)

An Ammonia world with some giant rings which could fit the planet inside them. I just like it since it looks like the ammonia world is actually sitting on a pedestal... 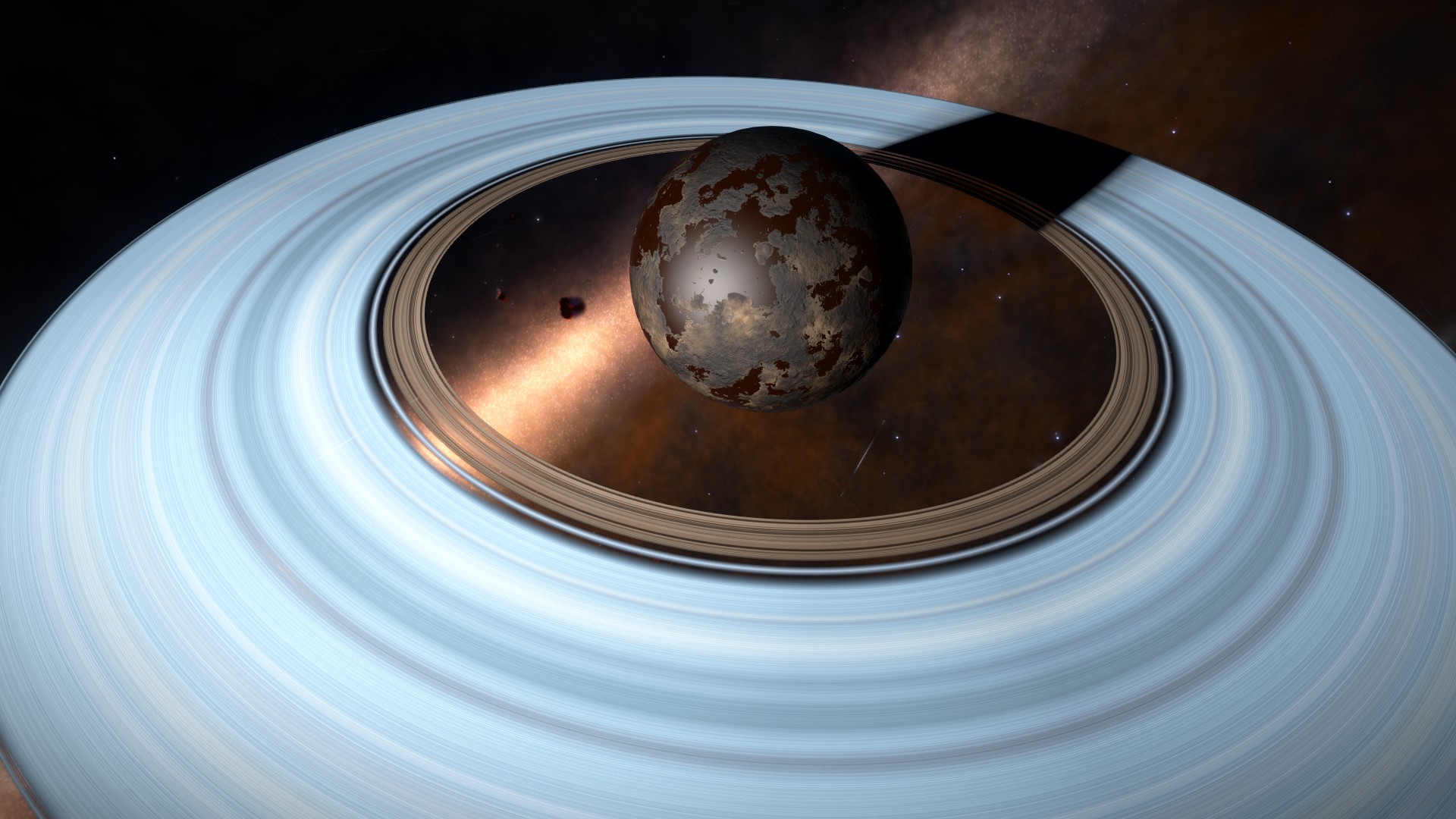 malenfant said:
That's a great, impossible-looking shot! (shame about the grid squares though)
Click to expand...

Thanks and yeah, unfortunately I noticed the squares only later. It is a known bug I forgot about. Should have taken the regular Windows screenshot instead of the high resolution in-game screenshot.

Sometimes it's worth taking the hi-res shots more than once, at slightly different angles or camera orientations, and the grid squares might be better in one of them. But yeah, always a problem with those, when facing toward the stars.

Orvidius said:
Sometimes it's worth taking the hi-res shots more than once, at slightly different angles or camera orientations, and the grid squares might be better in one of them. But yeah, always a problem with those, when facing toward the stars.
Click to expand...

True, I do have another shot where the squares are not as bad, but the visual snazziness of that one is much smaller See for yourself: 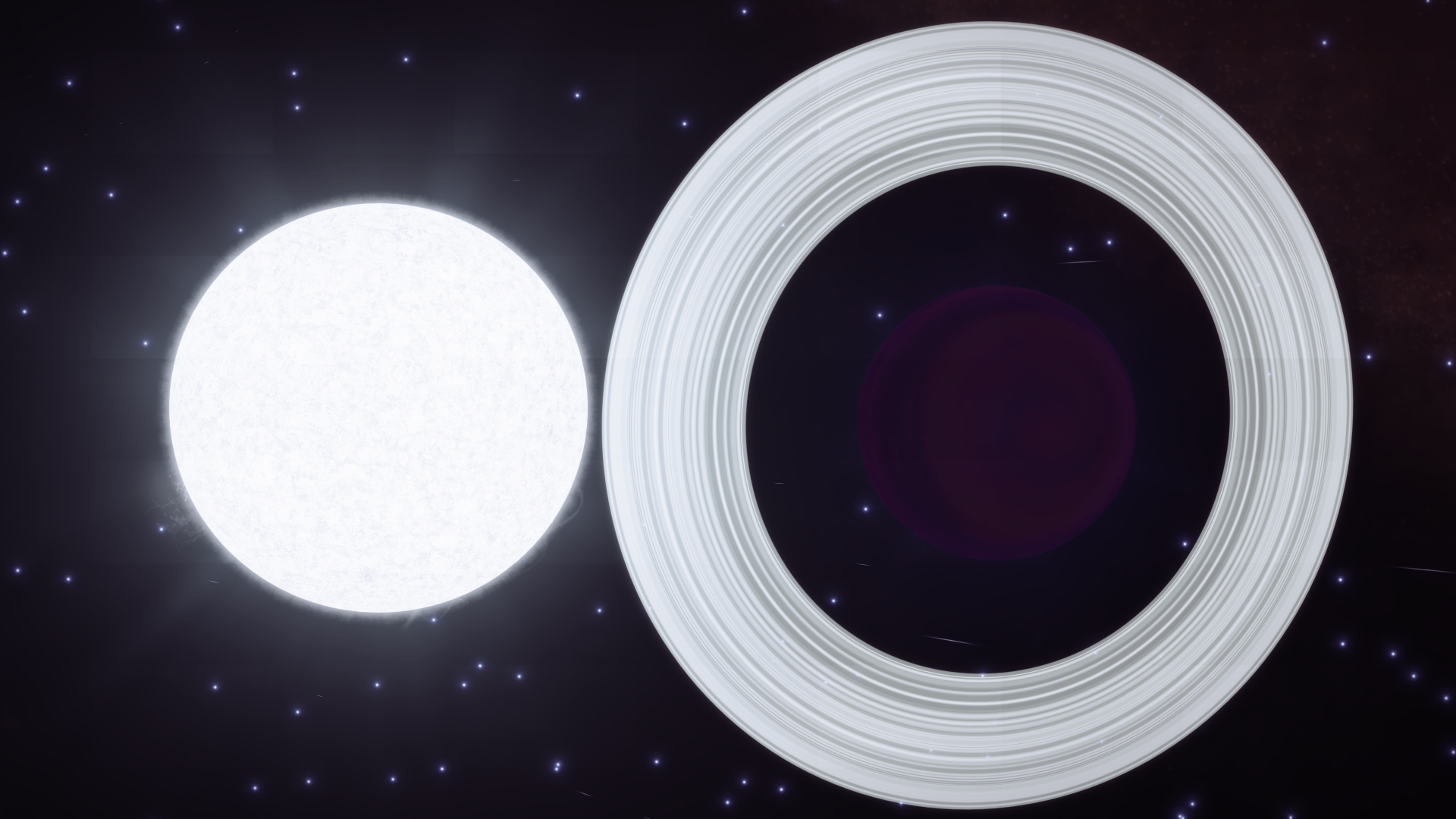