Space Engineers: Any DBX pilots out there?

I was flying around in Space Engineers, which I do from time to time, but I was annoyed that without putting considerable effort into the design of my ships, they usually end up looking like sticks with wings.
So I thought I'd do something different. It's a work in progress, obviously! 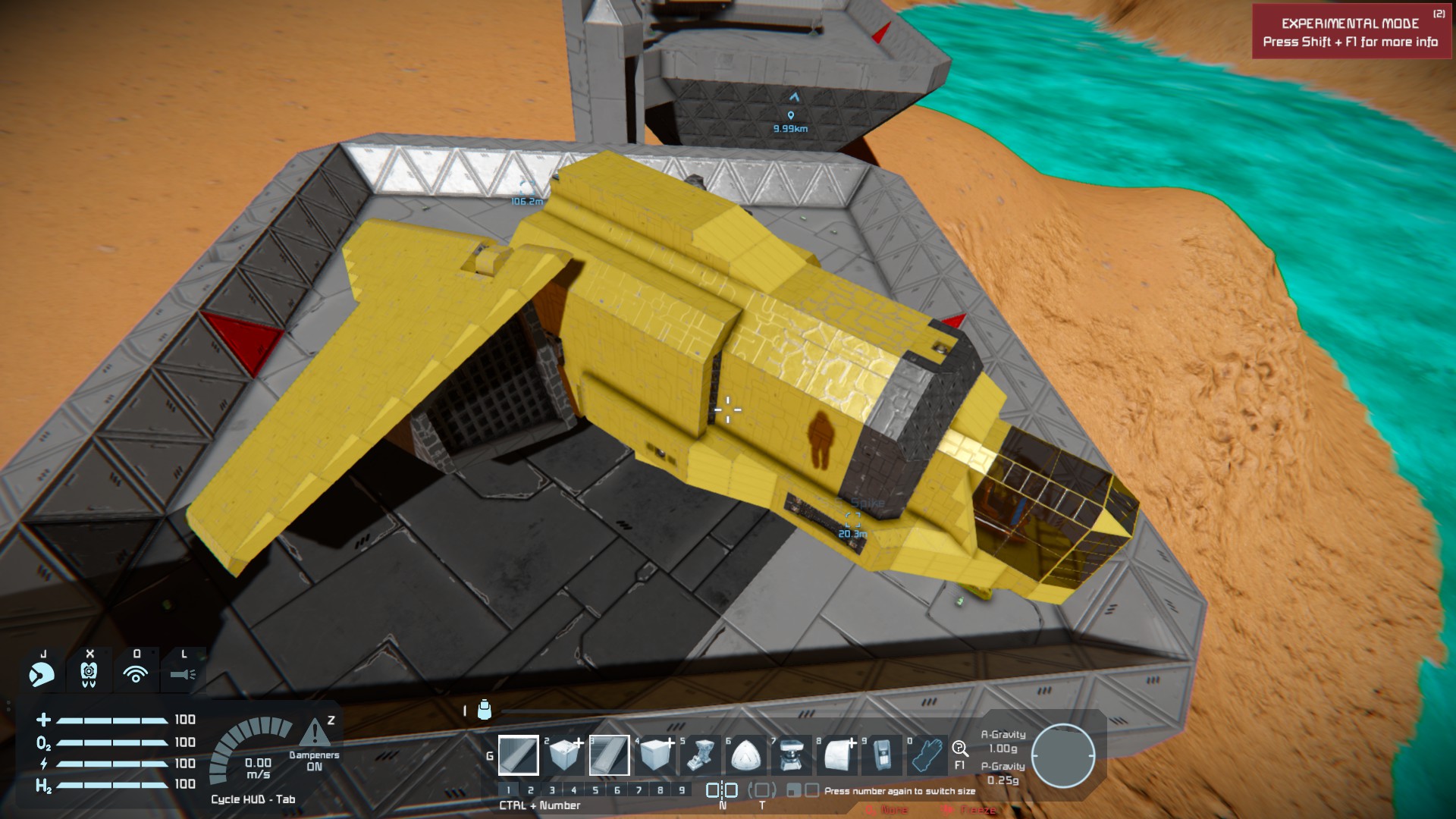 Sure it's not perfect, I think the wings may be too far back, but I've got the rotating engine pods working properly, and the scale seems about right, so so far, it's working out pretty well. I know I know, it's not 100% accurate and certain features (Vehicle bay for example) aren't replicated, but hey. 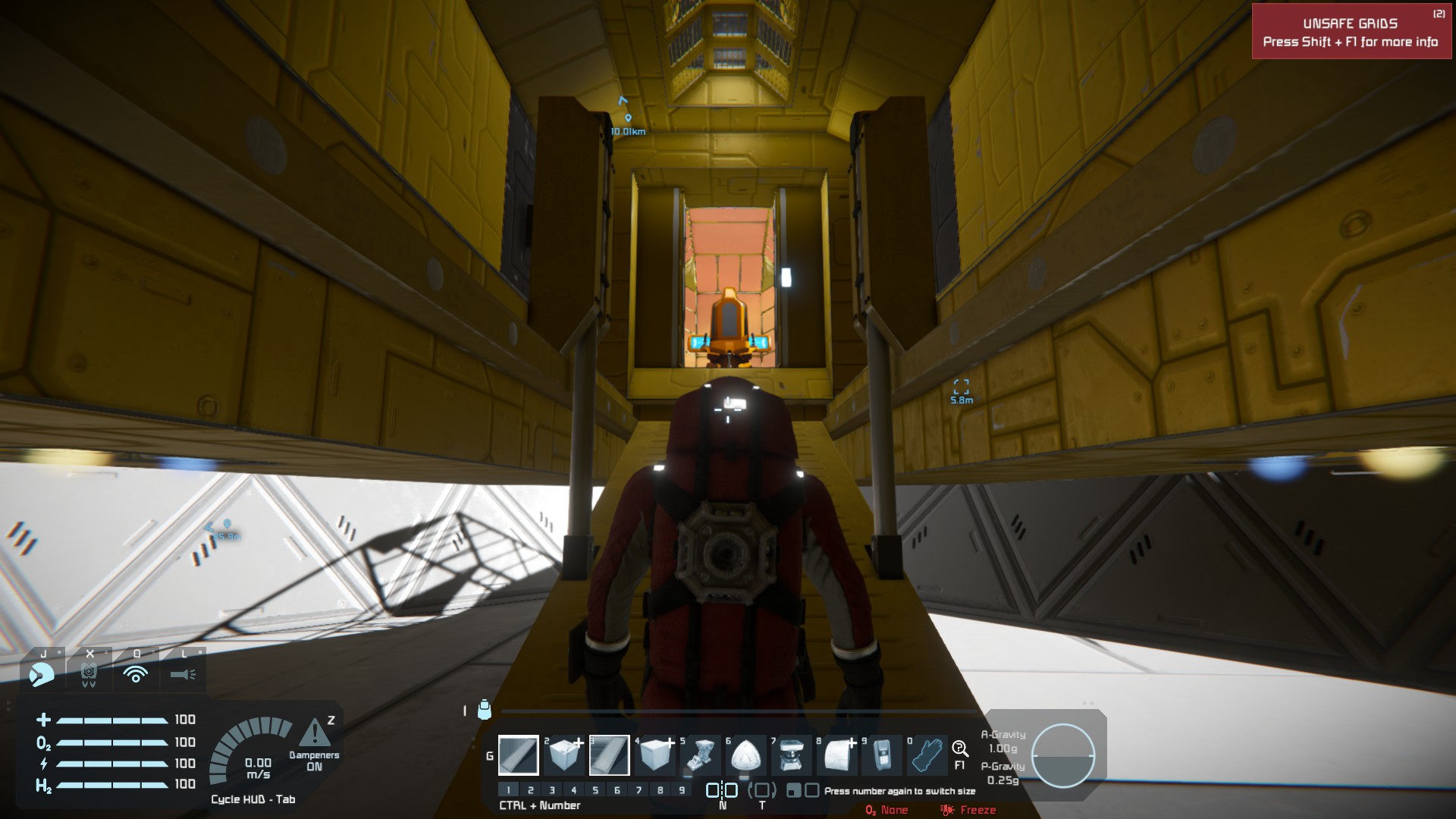 Still under construction as you can see, but I'm pleased with the way things are going! 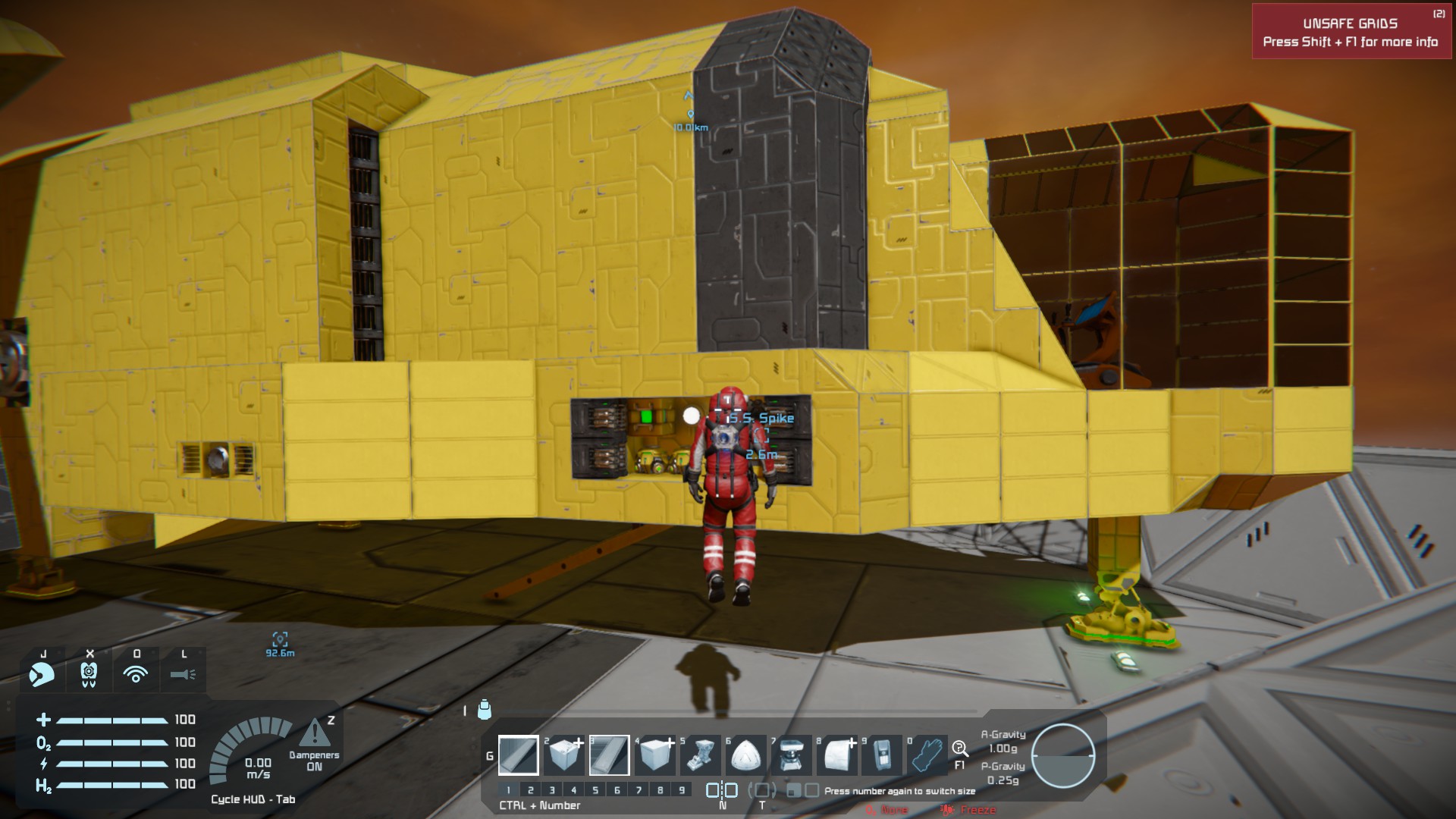 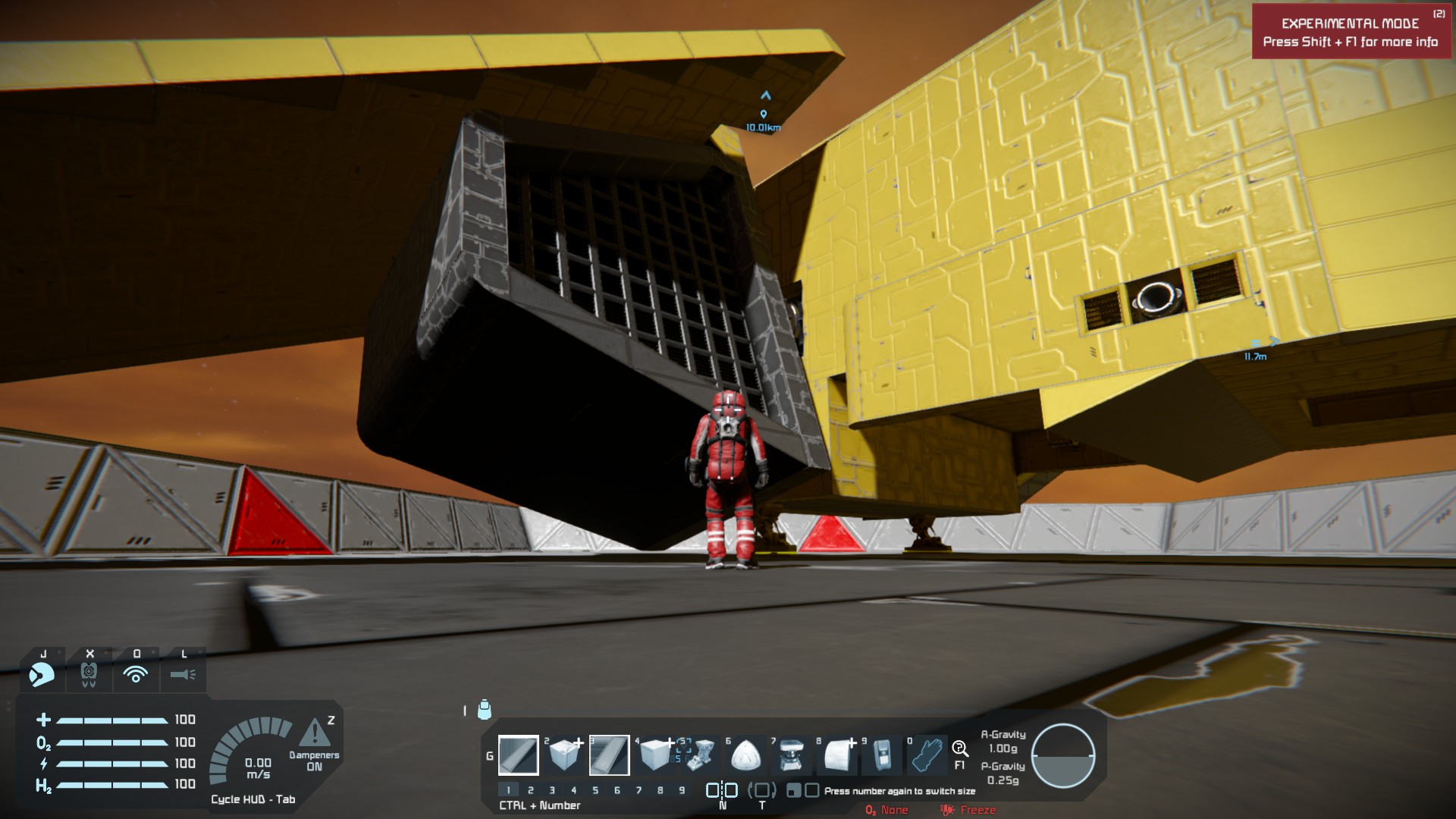 Way better than flying around in a magical space pencil with engines on one end and a cockpit on the other .

She's coming on: Both wings are there and they both rotate properly.
Space Engineers doesn't really provide for the complex geometry of the DBX's flight surfaces, so I had to create the wings as perpendicular (to the ground) surfaces, and then use rotors to lower them into their desired angle. That's what the gap towards each wing shoulder is, that's the pivot that "lowers" each wing to sit just above the engine intakes.

Still, each wing is now lowered properly, and the engine pods (to which the wings are attached) also move properly. 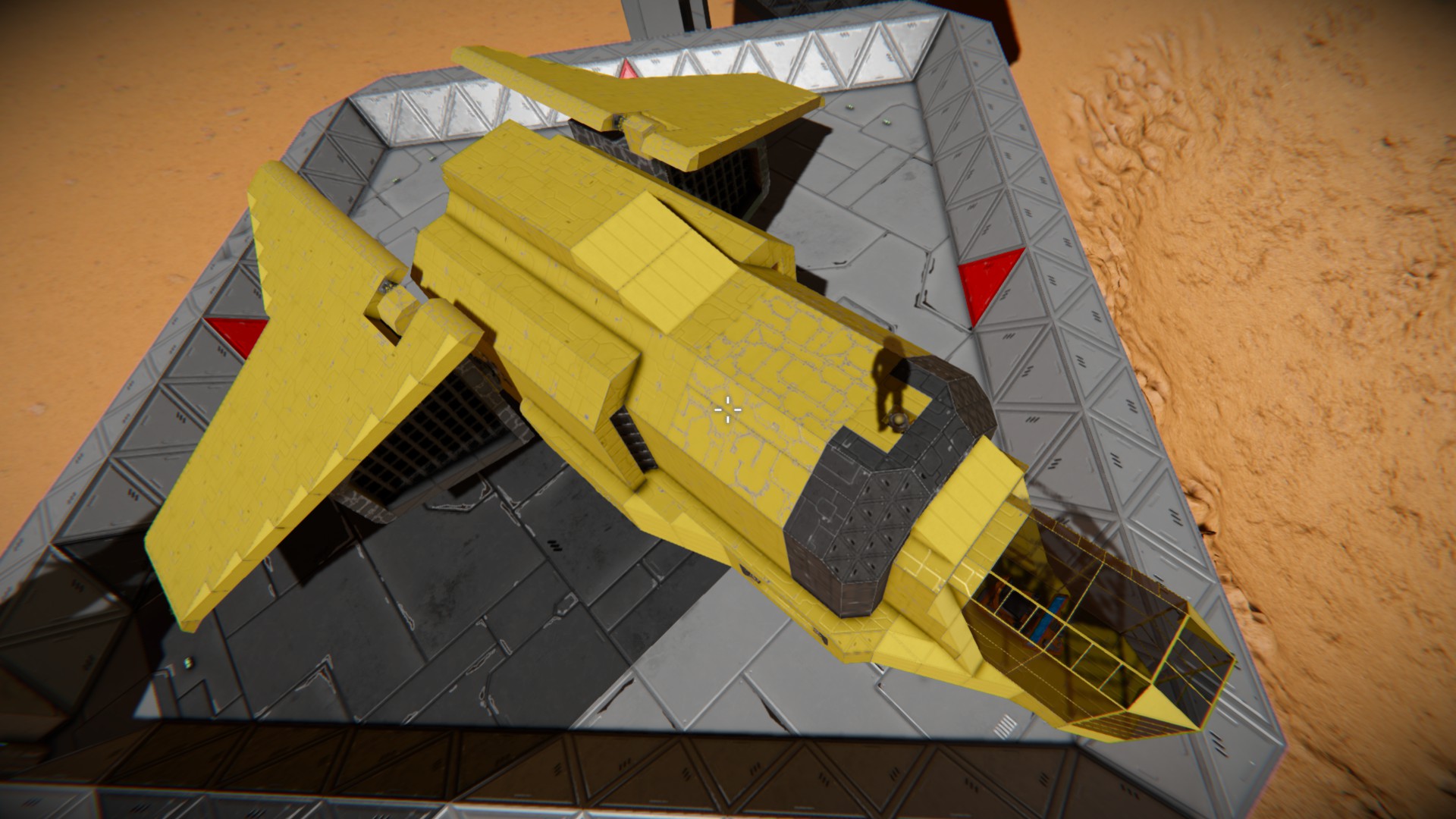 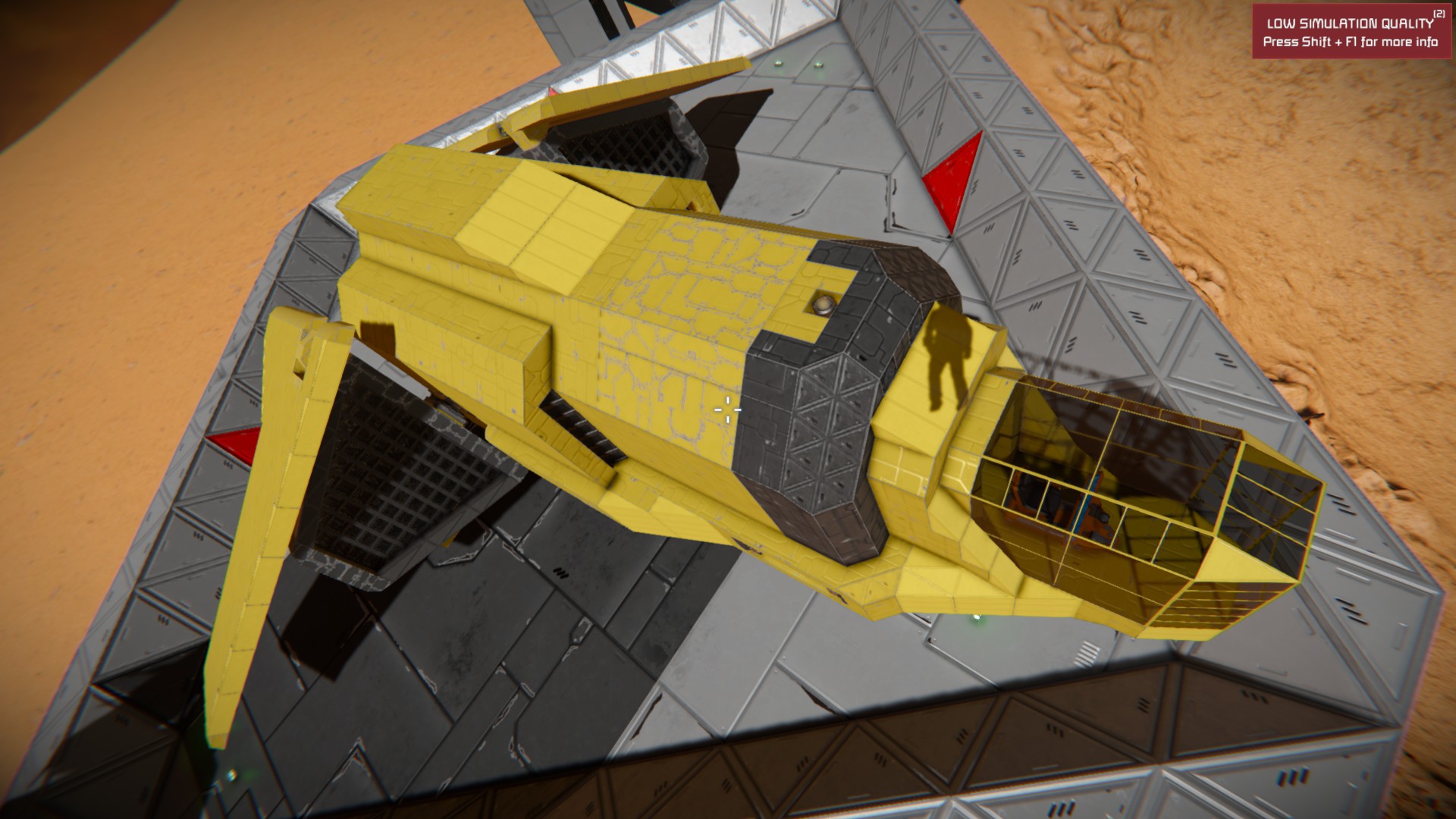 I have sort of stuck to this ship I built a few years back. Just upgrade it every now and then. It's still way off finished but its fun to play with.


I do love SE for the scale, just has it 'spot on' for me really. Nice to have a space game to fly ships in that gives you a great deal of satisfaction, especially when I've finished building (which I always do in creative), then I flip them over into survival mode to see how far I get with them. This one works great in survival mode.

No prizes for guessing what I'm working on.

Un1k0rn said:
No prizes for guessing what I'm working on.
Click to expand...

Obviously you need the chance to fly a Cobra Mk IV so you must be building it
Last edited: May 17, 2019

Un1k0rn said:
No prizes for guessing what I'm working on.
Click to expand...

There's really no need to guess, is it. It's a flying unicorn.

Cloud Breaker said:
Obviously you need the chance to fly a Cobra Mk IV so you must be building it
Click to expand...

But yeah I'm building a ship that somewhat mimics the Cobras. Currently have the engines, rear thrusters and rear entry point built.

But yeah I'm building a ship that somewhat mimics the Cobras. Currently have the engines, rear thrusters and rear entry point built.
Click to expand...

Show some screens when shes ready.

Will do. I'm not the most creative type, so it'll take some time. Plus I'm still getting my head around the game mechanics.

DBX is just about built. Not 100% Finalised, but it's certainly spaceworthy. I've taken a few liberties, bolting on extra weapons and whatnot, but hey, my ship, my rules .

DBX In the Hangar 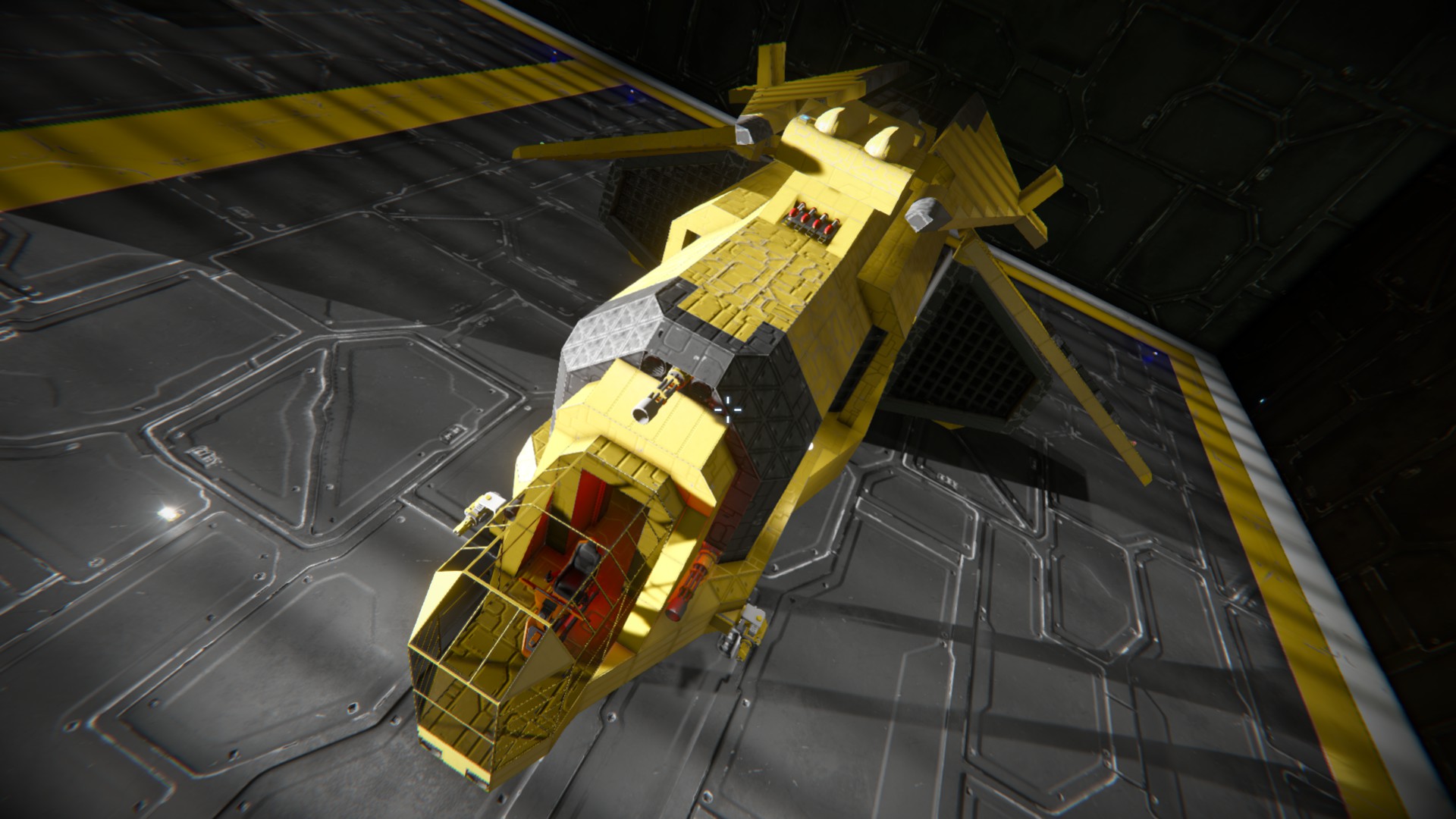 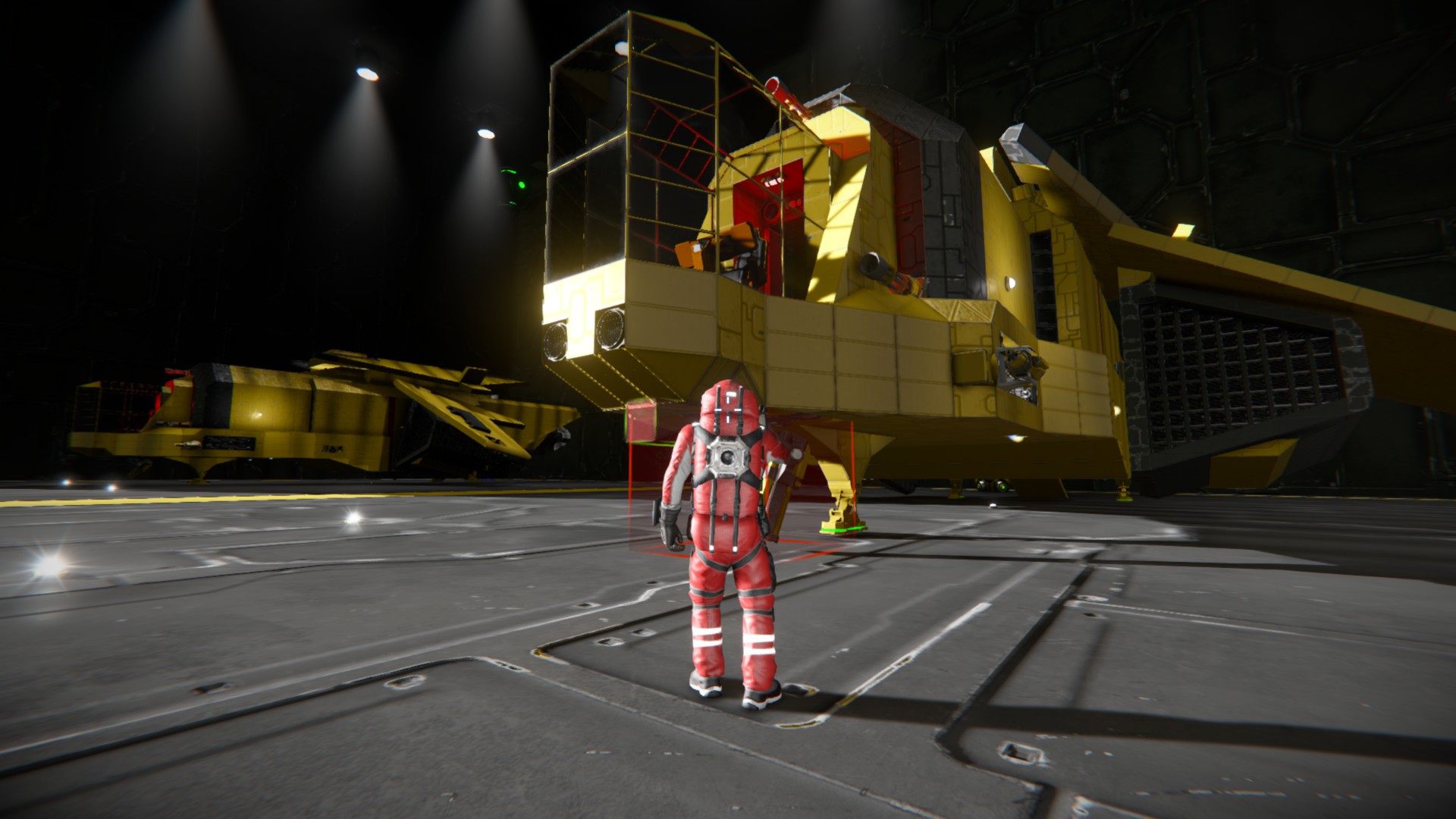 Profile: Not perfect, but close! 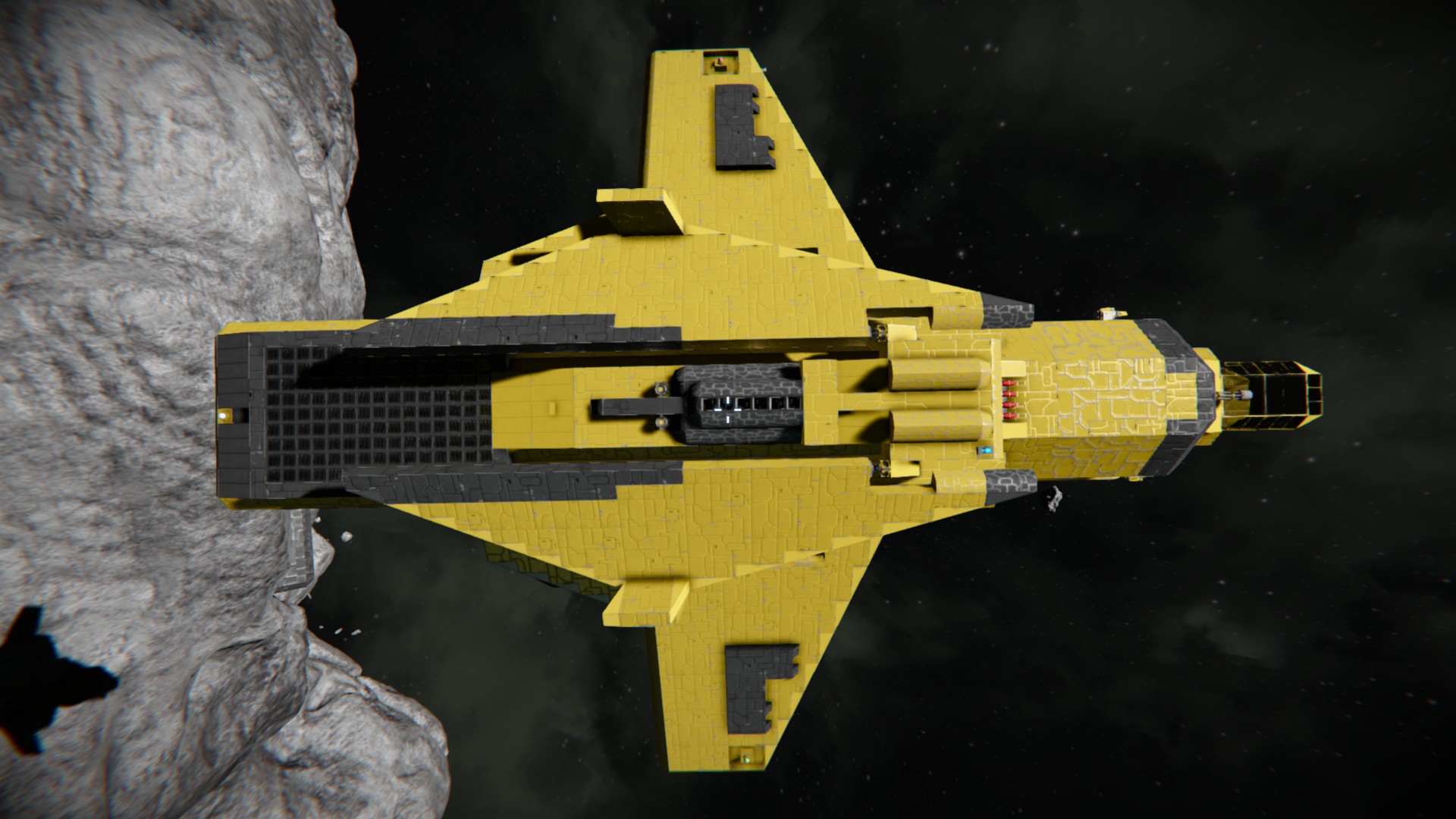 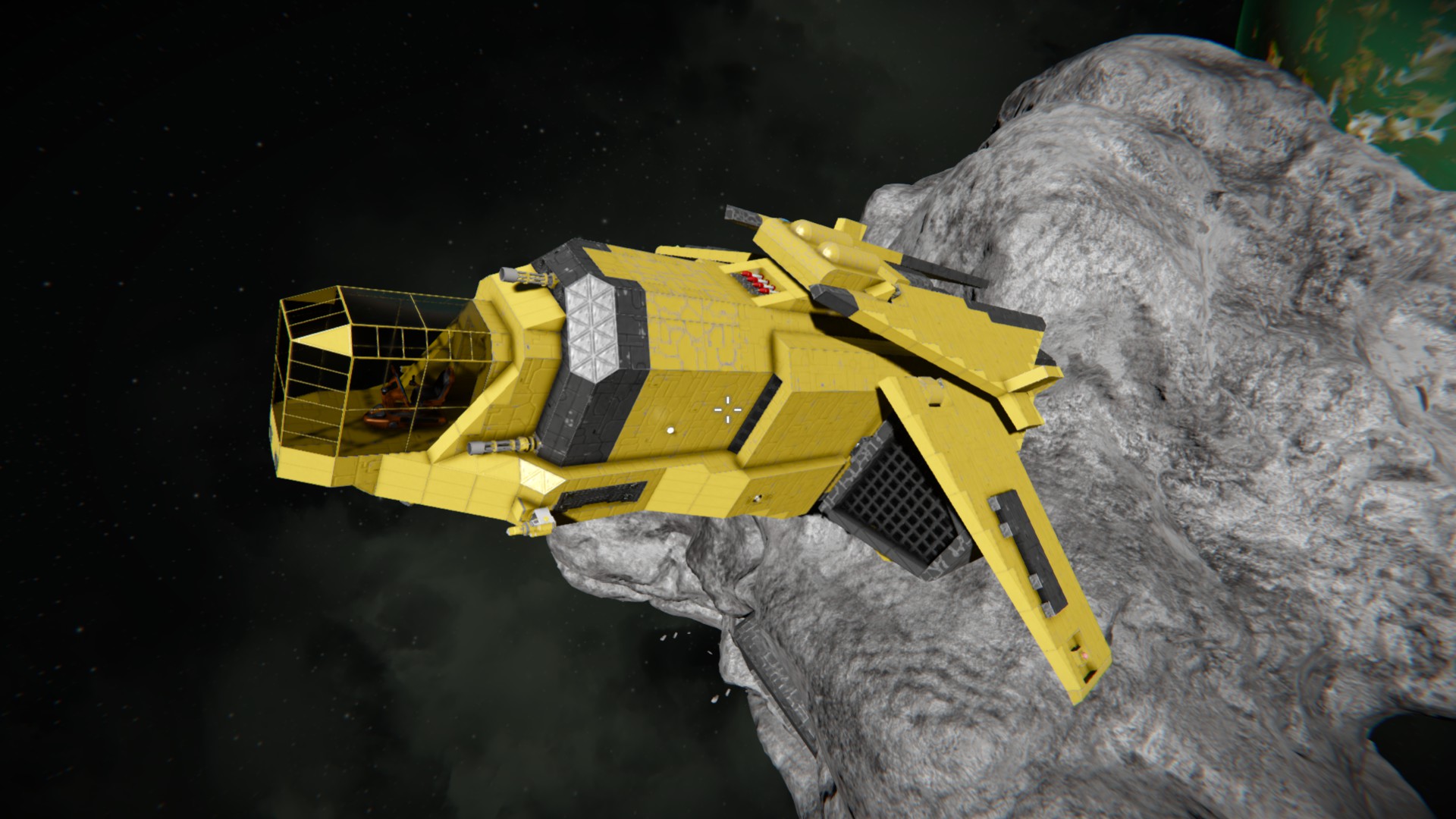 Engines In Landing Mode
I even got the boarding ramp in the right place. Sadly I couldn't get the landing gear to come out from the engine pods, it's just way too much work. 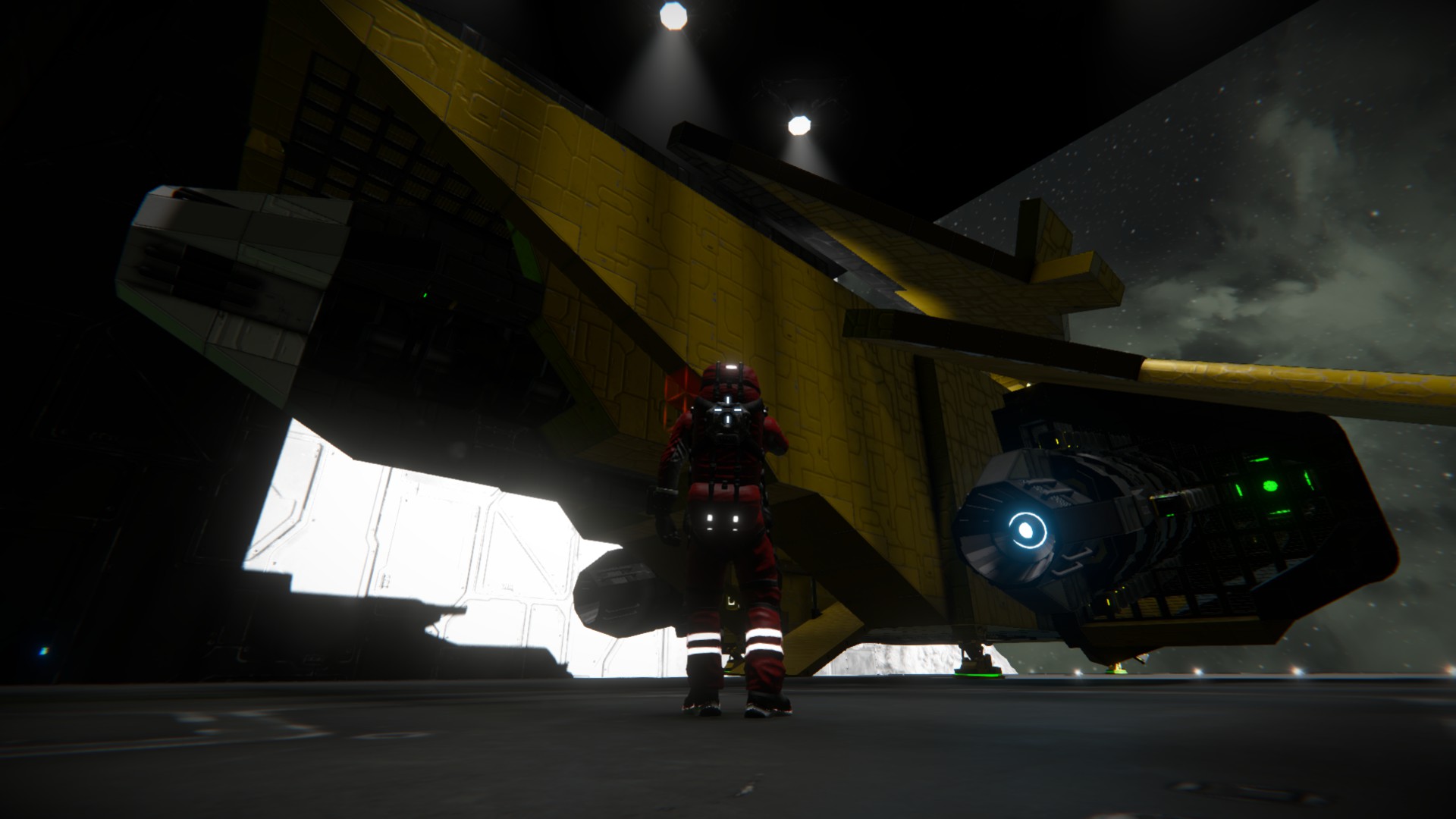 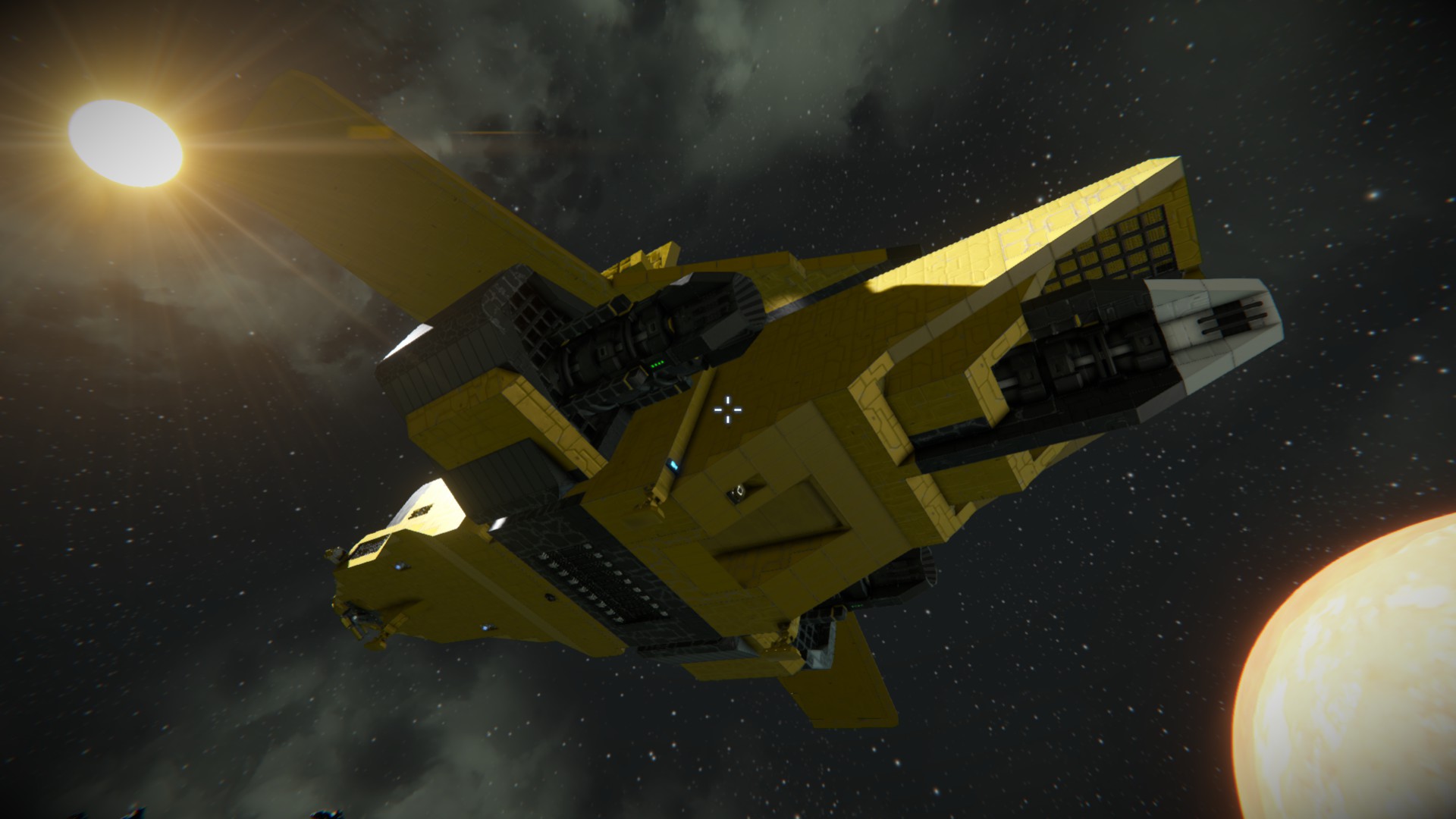 Asteroid Base
I've even started building them a little asteroid base to hang out in . Trust me when I say that moving all that rock out of the way is a time consuming task! 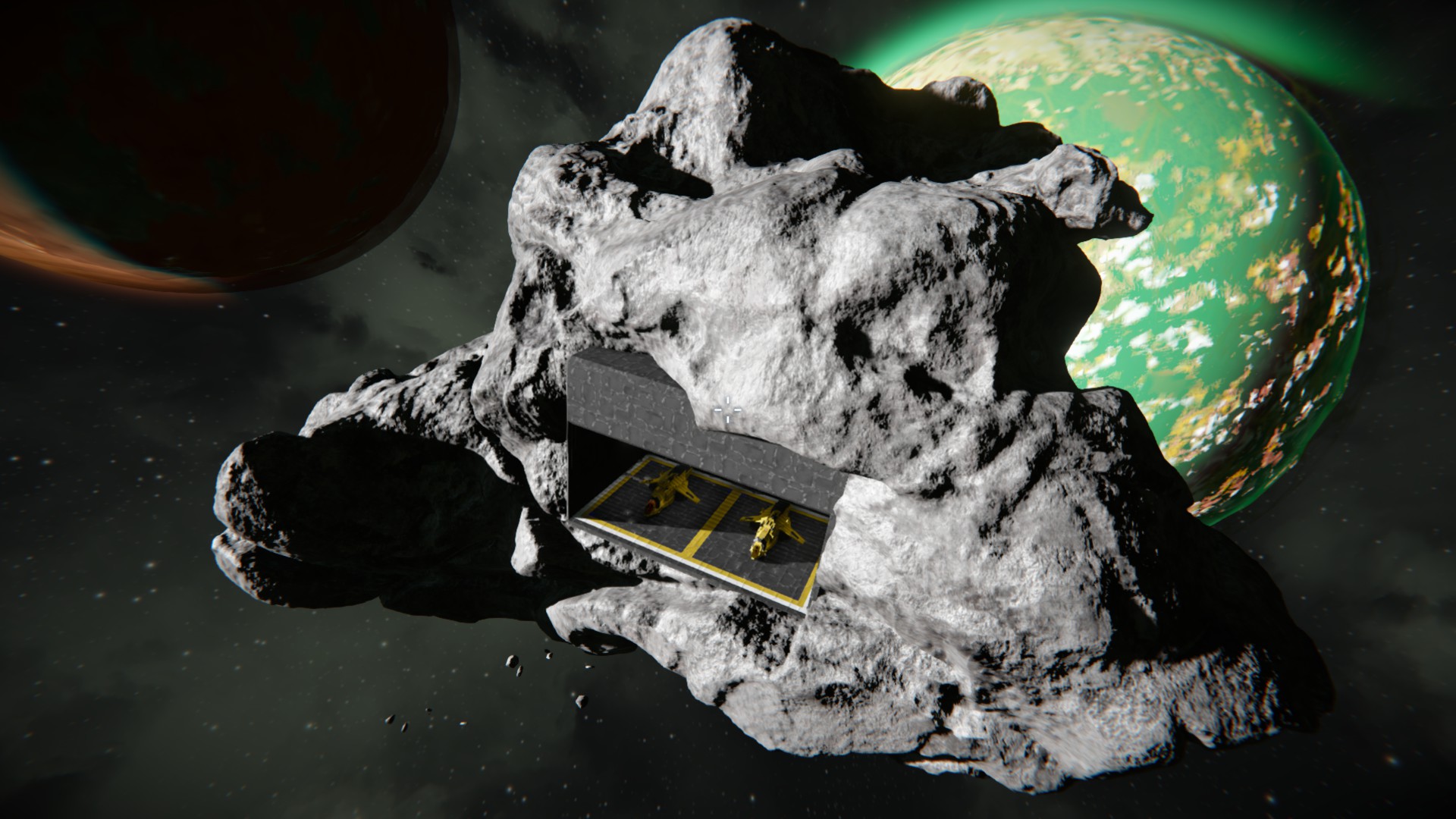 I'm pretty pleased with it to be honest, and thanks to a large number of gyroscopes, she's a dream to fly!
Now I'm off to shoot up some space pirates!

EDIT: Later on, I investigated a distress signal and found a derelict Space Pirate corvette.It looked cool, but inside it was like something from Dead Space, (maybe it's just cos I was playing in a dark room and the automatically opening doors freaked me out), so rather than rooting through it in deep space, I fitted a docking collar to it and dragged it back to my asteroid base to be investigated at my leisure, in a more friendly and familiar environment.

The little DBX was about a third of the size and about a tenth of the mass of this ship, but I built her well. She's over-engined, and she has strong shields, so I was able to bring the corvette back with ease . 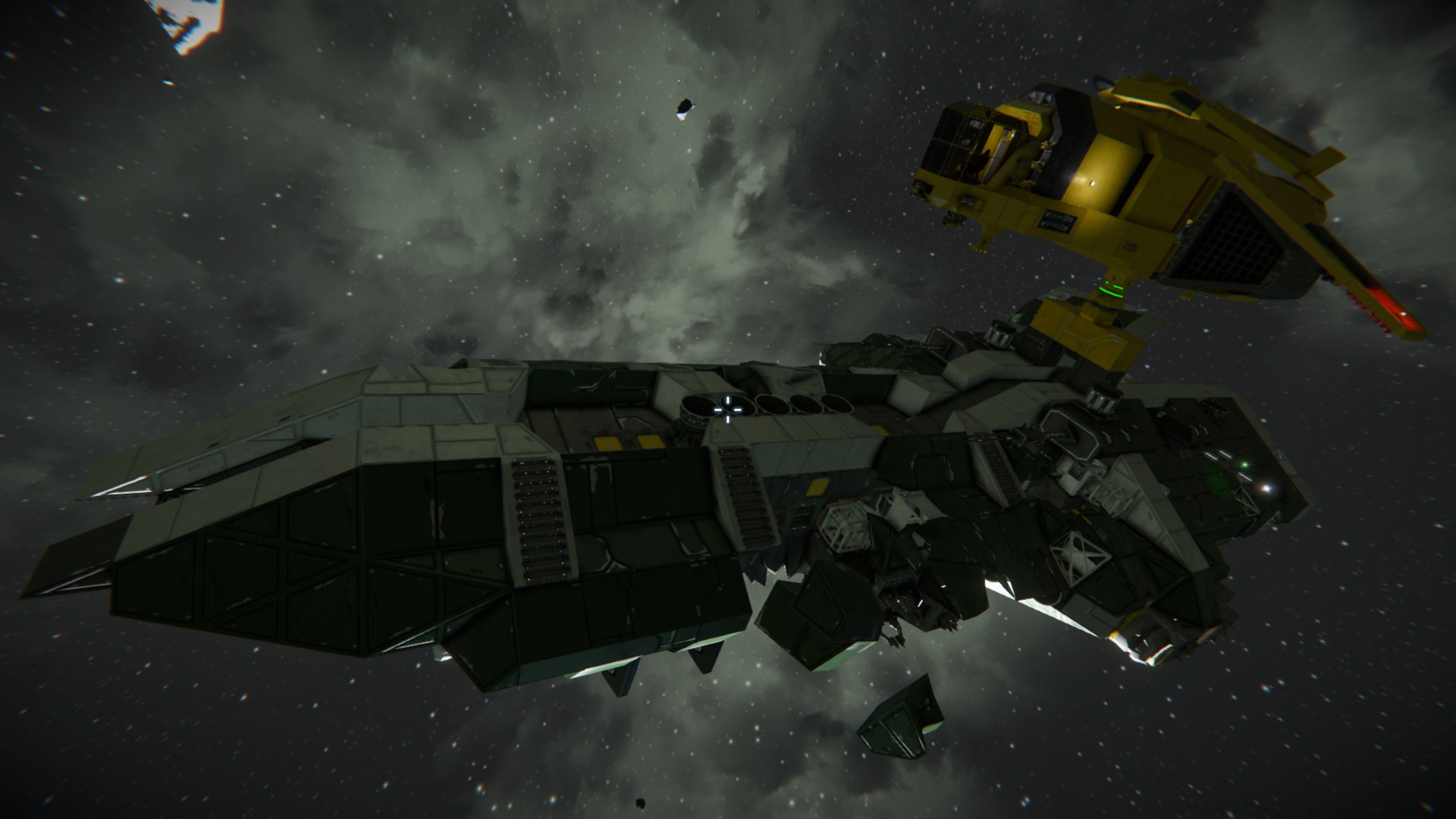 The corvette had a lot of weapons on it originally, and would have been a serious threat to my DBX if it wasn't derelict when I found it. Tomorrow I think I'll start building something larger that's designed to take them on and beat them. I want to stay top dog!
Last edited: May 18, 2019

Now, building and thoughts on scale.
I see in the thread here players building various ships, that is the great thing regards SE, it makes it feel personal, for me at least.

Now scale and I'm not trying to highjack your thread here @Arvel Yael..


So if you watched the video to the end, you'll have seen a truer scale of the Anaconda when compared to my T1 there. The first comparison being a little unfair, as I got to 'just make scale up' for the pic
The 747 is really unimportant, but there for fun.

So what do you think scale means to you ingame. For me its very important to have a recognisable object to compare too. Nothing better than our ingame character really.

Scale in space games is hard anyway. I do think however, Space Engineers has really nailed it down and when you get out of your ship and float across to an asteroid that looked pretty insignificant when flying towards it, but ends up that the caverns inside are large enough to park a pretty large ship inside (I have parked my T1 in many asteroids) it really gives that scale some clout.

@Arvel Yael.. Your pics above there, working from the top, so 2 & 5 (top being 1). They convey scale well to me. The ship starts to mean business when I see those pics in particular. Whereas with many space games, the ship when shown out in space viewed from 3rd person, is very hard for the player to get a true scale, but once you've viewed it and walked around it (in particular 3rd person or vr with another character), it all comes together and that ship flying in space is really the scale you think it is.
Does that make sense to anyone..

When you can't do that, or see that, as in many space games. Then they really do lose something, for me anyway.
Last edited: Jun 19, 2019

I like the Asteroid base pic. Cos I done excavating before too.

Finally got around to painting her properly.

Put a drill on the ship. Got some ice to fill the tanks. Good little drill this, extends enough to get to most things, without having to hand-ball stuff.

Trading, currency, economy, factions able to sell ships etc.. Coming to SE, not sure when but this is the latest list they put out on steam.

I've been doing a little work on the interior of 'T1'. Just the first deck for now, plus there is still lots to do there.

Interior colours can be varied with lighting, you can do this in great detail, although it burns up time, but is well worth it.. For now I have left the lighting plain, I will do the lighting when the deck is finished fitting out. There is also painting to do, lots of it, again time consuming but worth it. So I'll have to put time on one side for that too.
Exterior colour is not too bad, I may keep it, not sure yet.

I also changed the rear raised bridge, I call it the 'Pilots Bridge', the main bridge being the 'Captains Bridge'. The raised bridge suits the shape better than the other I had.

This ship is a few years old now, but I use it the most, by far. So I thought number '1' would suit for it and the 'T' is to be put in a mug with two sugars please..

I also reworked the engine room, not seen here. Plus all the air flow/pipes etc, so Cryo bays can be fed etc. Doing that has enabled me to cut down on batteries a little. So far running her in survival mode has been o.k. You do have to think more regards the way you fly, energy, fuel etc, is all used up more quickly if not. But so far it's been o.k.

I decided to rework the storage too. Now it's much more organised.
With SE I tend to forget the interiors, just make sure everything regards operating the ship is done. Whereas when you think about it, you need an interior for the crew..

O.k. it isn't completely accurate, but fair for a little under 15mins build time. A 'Sidewinder', scale wise pretty close going from the sizes I found. It doesn't function, for a functioning one to scale'ish, as here, would be better in small blocks, these are large blocks.

Loosely based on ED's Corvette.. No where near finished, just a shell with some working parts.

Stop making me want to reinstall this game! I have too many games in my back log as it is, and I don’t play these kind of games in Creative as it is.
You must log in or register to reply here.
Share:
Facebook Twitter Reddit WhatsApp Email Link
Top Bottom