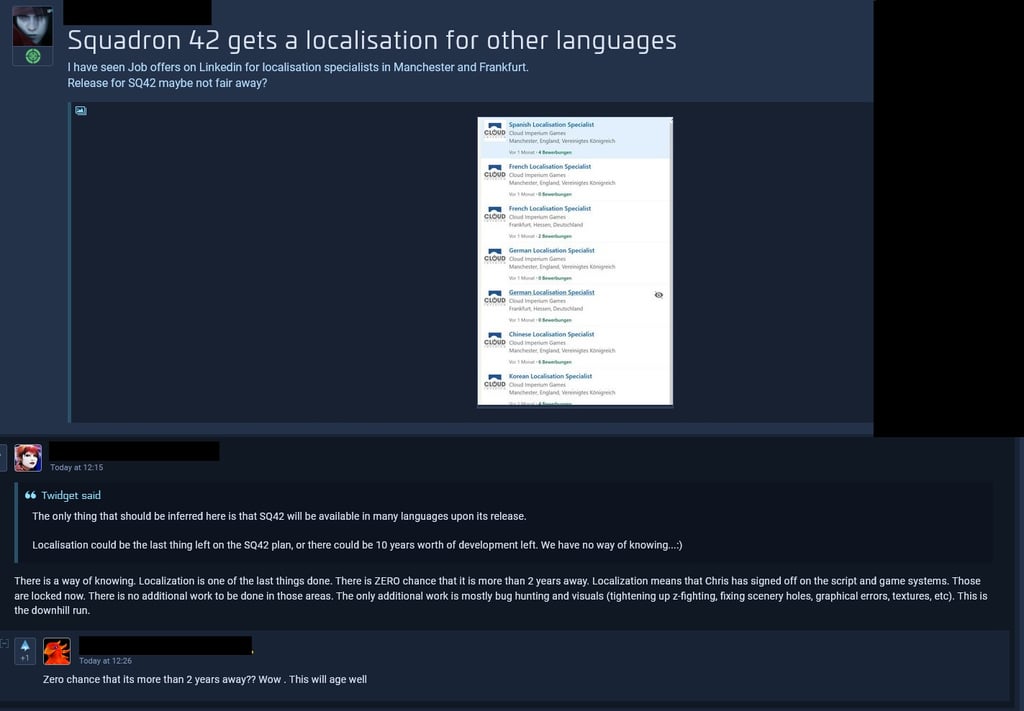 CMDR Reza Malin said:
I am the same. The whole idea just swept me along, and the ships are just amazing, no one can deny that. Especially as i love science fiction. Little did i know back in 2013 how real the term "science fiction" was going to prove for SC.

Back then though, backers had no idea it was going to take quite this long. They never said, you might see a slight return on your investment in 13 years. No promises. Thanks for the cash though/

Which is how it feels nowadays.
Click to expand...

I guess that's lending some credibility to the oft used adage "you don't understand game development" and for the vast majority of times it is used on game forums, could usually be applied to the accused and accuser.
FWIW I nearly dropped £300 on Star Citizen in 2013 due to YouTube videos from The Mighty Jingles and Jester814, but then confirmed CIG were using CryEngine and backed out of it rapidly...

CMDR Reza Malin said:
Was that recent?
Click to expand...

Abusing the report button on comments and posts is against Reddit TOS. The report button isn’t a “super downvote” method and abusing it can get your account restricted or banned by Reddit’s admins.
Click to expand...

LOL, i guess some people didn't like the post asking about bugs and decided it was a troll

A lot of comments in this thread are being reported over and over for a variety of nonsense reasons.
Felt the need to make a post to inform the community of this, as it seems to be people disagreeing with one another and using the “this is misinformation” report option to flood our mod queue with comments that don’t need action.
Click to expand...

Oh man, so many gold comments

I have been saying this for over 2-3 years. As soon as you have higher than 20-30 fps your experience gets 10 times better.
Click to expand...

The game is amazing when it isn't broken. If you can live with the bugs then go for it. The refunds sub are just a bunch of super big brains who are way smarterer than everyone else on the internet. When not defending the world from Chris Roberts they are probably debunking religion and the hyperloop. P
Click to expand...

If that was the case they would have moved on by now, but a lot of them will never ever give up the hate.
Click to expand...

The rational response is to take your refund and move on with your life if you no longer wish to fund the project.
It is not creating a subreddit dedicated to it and then spending a portion of your life still following the game and attacking both the development and backers ad infinitum.
Click to expand...

I'm pretty certain when that guy first posted about Fyre Festival being a scam, he was told by many people to to stop spreading FUD, to move on with his life or equivalent. Well, turned out he was right.

Uhh...yeah no. You're seriously implying that creating an entire subreddit dedicated to ragging on a game day in and day out for years is a rational response to said game still being under development?? In what bizarro world does this normally occur?
Click to expand...

A world where people speak out about shady business practices?

Ohh my precious Karma.
Here we go:
A lot if not all starcitizen hate wounds are self inflicted.
CIG has set up unrealistic goals from day 1. Answer the call 2014, 2015, it was hard not to show sq42 progress, sq42 next year, sata ball, 3.0 by the end of the year, weeks not months, theathres of war, salvage, staggered development, more funding will expand development and speed it up - and im probably missing a ton.
All turned out to be in the words of CR - bulshit.
We have a small but very loud and very toxic part of this community that absolutely deserves the cult status name.
We have a ton of fake " I'm a ceo or I'm a project manager" comments that are just bat crazy.
We have people saying we'll cig needed to build an office first so real development didn't start until 2015.... I mean how did anyone at cig think that they could release a game with the original scope on 2014?!?
SC can be fun. It has potential. The idea is amazing.
The execution is terrible.
I think its safe to call it a buggy alpha demo that can be fun but to claim its anywhere near the level of polish of any other space sim is simply not true.
Elite has Odyssey issues and people are burned out with the whole mile wide inch deep thing, but right now sc is an inch wide and inch deep, with plans to make it a mile deep. The digging tech is still in development....
Click to expand...

StuartGT said:
I disagree - the "Static Server Meshing" (basic instancing and servers like other MMOs have) is easily doable by CIG and so I expect that to be added.

Dynamic Server Meshing? Maybe by 2030 or some other crazy far-off year?
Click to expand...

After some other company does it, and CIG tries to buy it from them, and claim it as their own.

Agony_Aunt said:
But but but... Star Citizen is spheshul!
Click to expand...

I like the one where the experience gets 10 times better. The nonsense is as fick you could cut it with a knife, but incredibly people today are even ficker. You would have assumed with the internet general IQ would rise but it rather regresses.

My controversial hot take: a game running at 30FPS is more to play than at 15FPS.

StuartGT said:
My controversial hot take: a game running at 30FPS is more to play than at 15FPS.

It's double the frames and a thousand times better than elsewhere.

Navigare Necesse Est said:
It's double the frames and a thousand times better than elsewhere.
Click to expand...

Don't forget one SC frame is worth 5 frames of any other game!

metatheurgist said:
Don't forget one SC frame is worth 5 frames of any other game!
Click to expand...

It is no normal game. Normal games arent made for frauding the crap out of gullible people. Well, some are. The cheap mobile and mtx cash grabs. Though I wouldn't call these "normal", but at least they made it to release fruition.

sovapid is the expert on that and I trust he deals with it in the appropriate way.

Navigare Necesse Est said:
sovapid is the expert on that and I trust he deals with it in the appropriate way.
Click to expand...