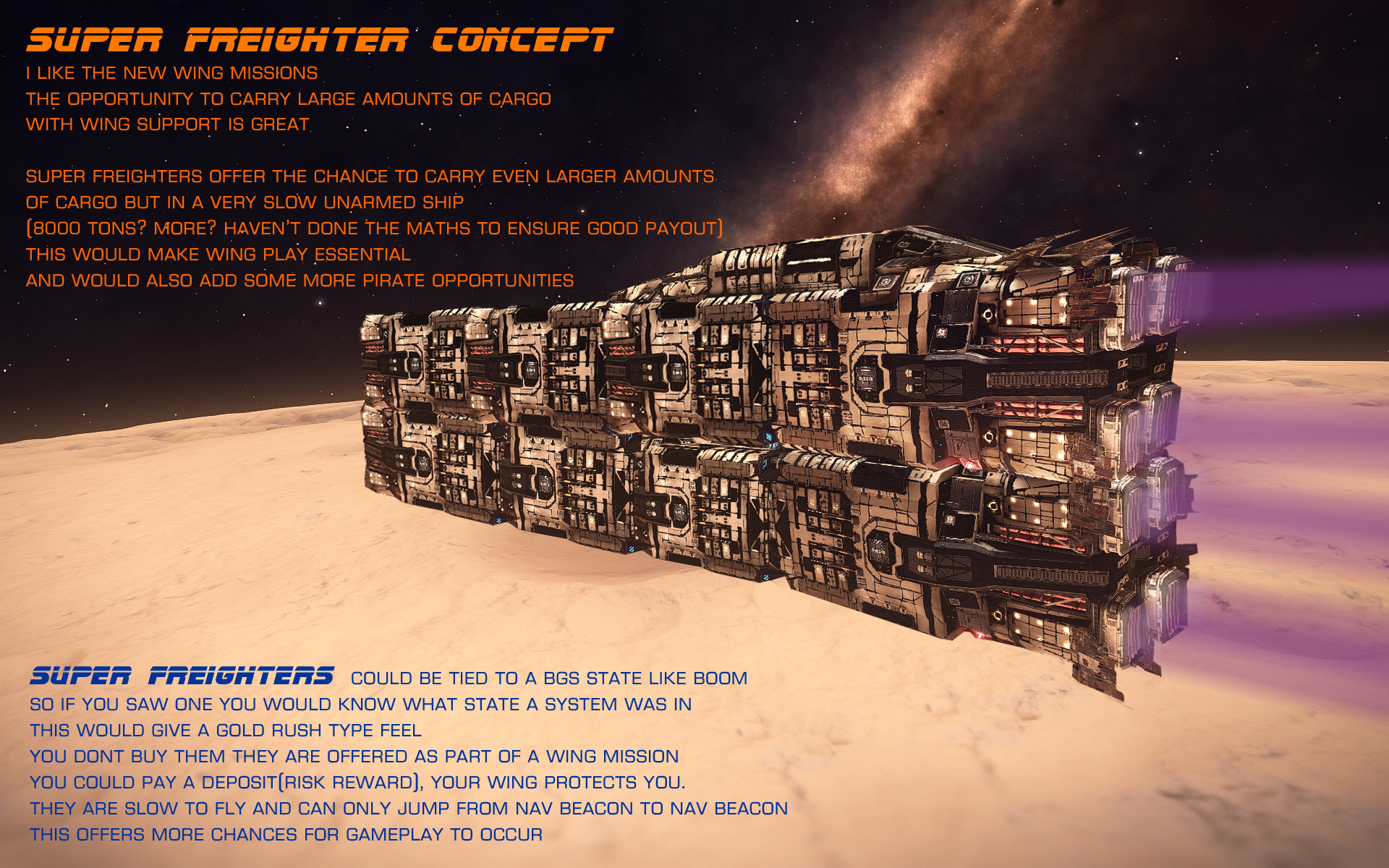 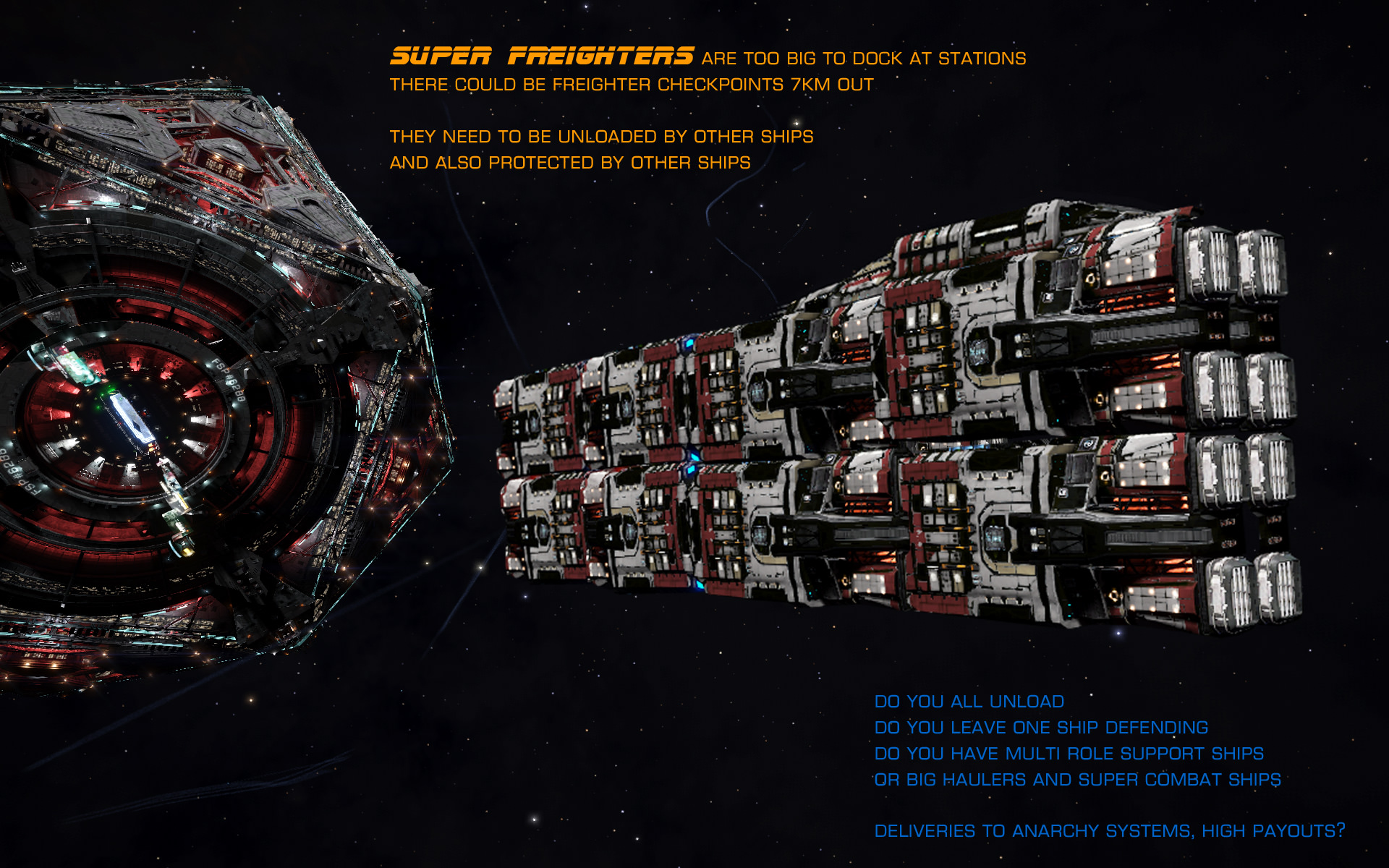 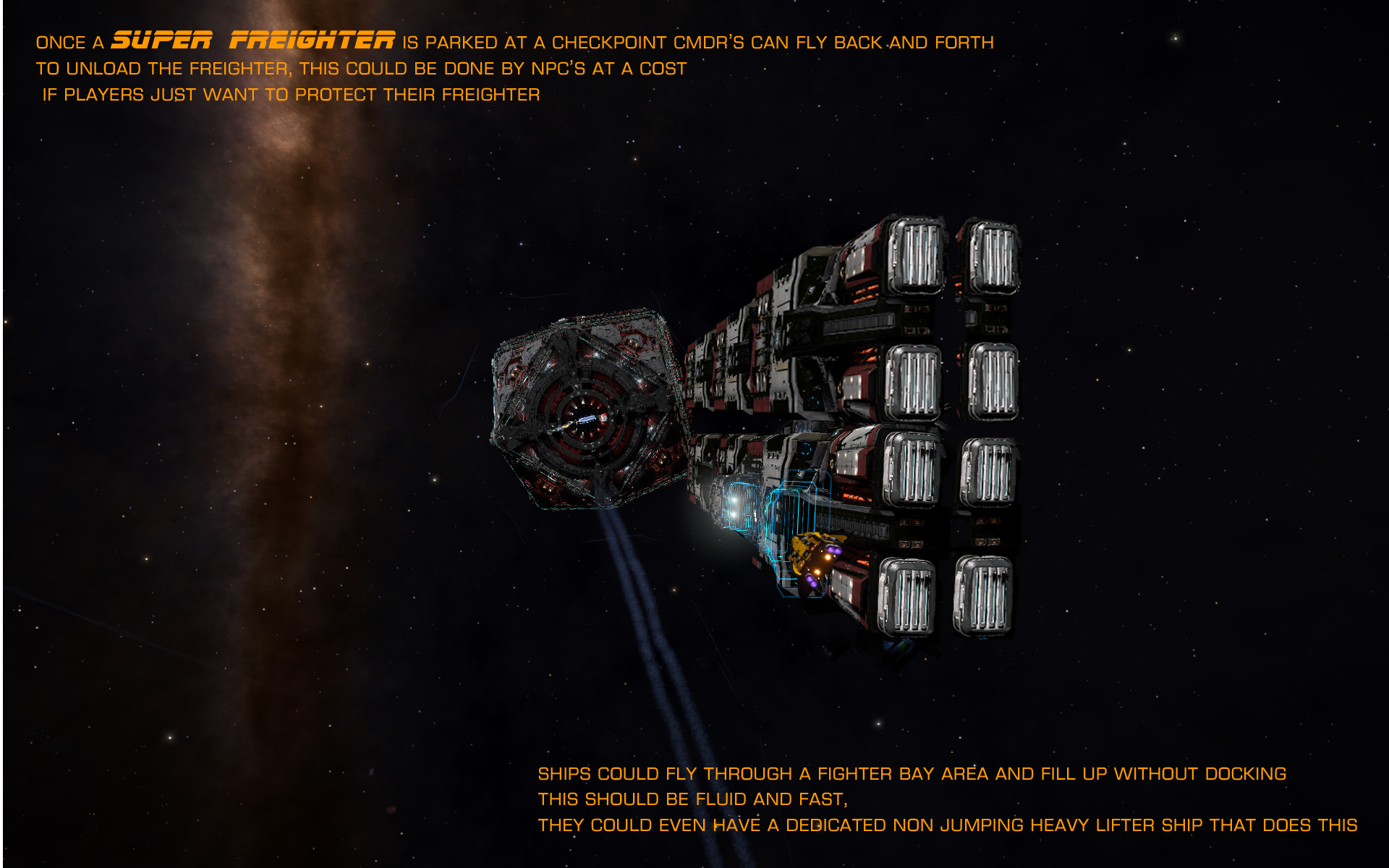 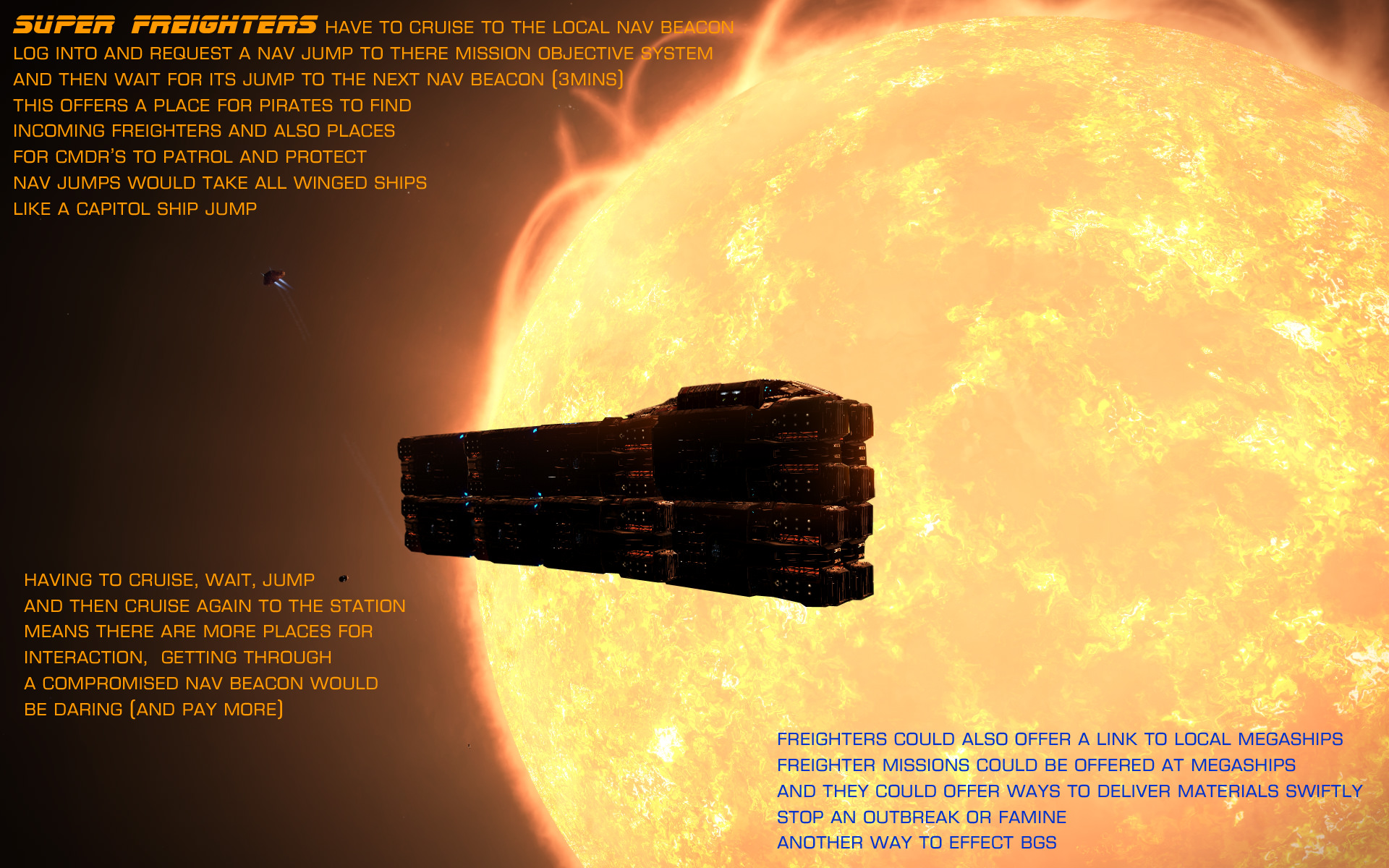 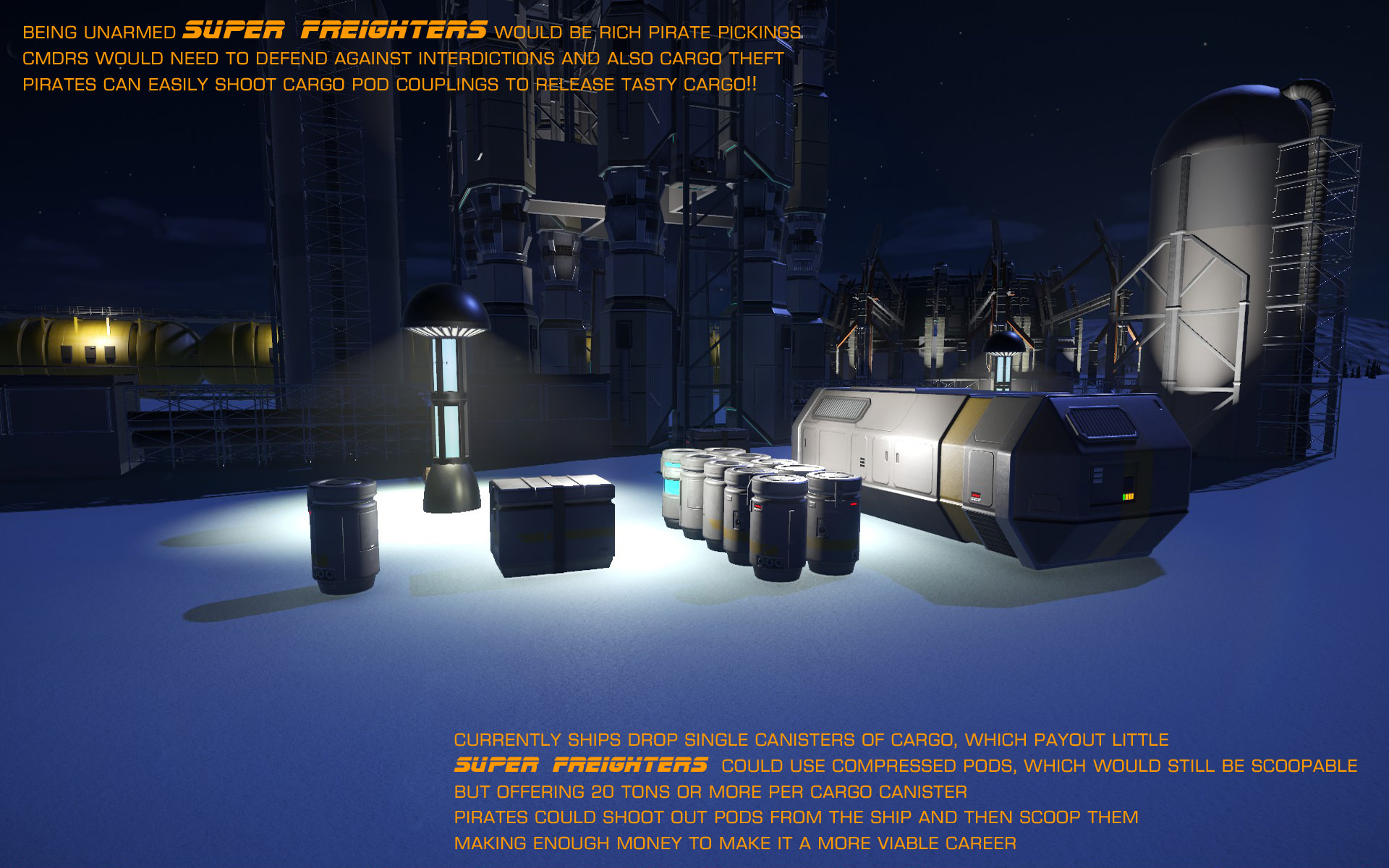 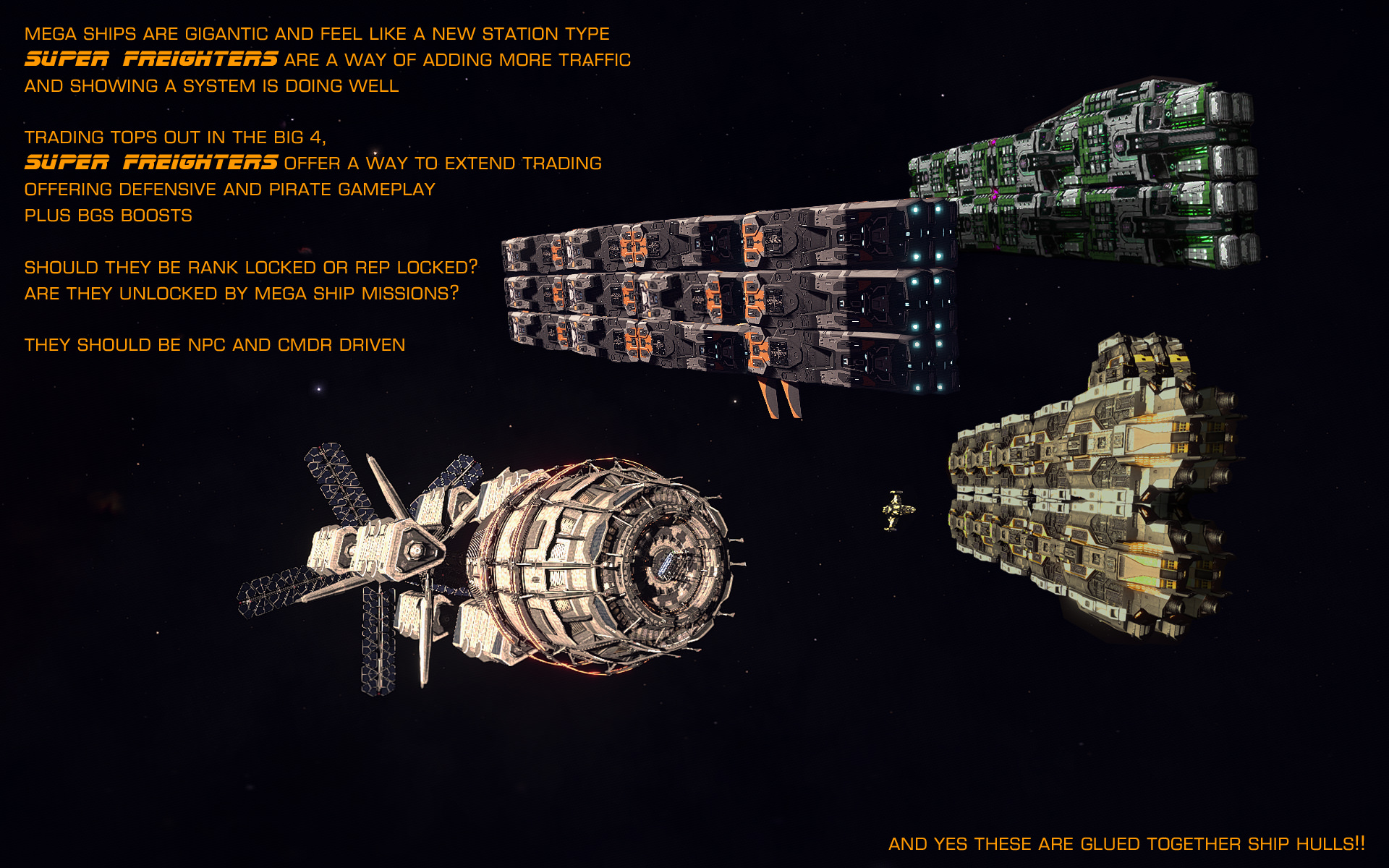 Super Freighters always wanted to see them, not as big as megaships but active large cargo carriers.
Yes, made of glued together ship hulls!!!

That is one funky looking Anaconda.

I don't disagree with this

You could make a drinking game out of all the times those pics say “Super Freighter” in Star Trek TNG font.

An interesting idea, though.

Y
I really like this idea, could it be possible to fill it with fuel and limpets? If so id find joy in jumping in to systems and refuel everyship at stations

Such a cool concept. I would really like to see this happen.

It would be awesome if random CMDRs could join in. You drop in a see a frieghter, or learn of one nearby, and you can just drop in and request access to help transfer cargo.

And as a PvP Pirate (who apparently is ignorant and has never done any PvP pirating before and so doesn't know what he's talking about), I would love to organize a wing to go in and steal some tasty cargo from another CMDR's superfreighter.
Last edited: Feb 10, 2018

L
Only if I can be Captain of the Quadconda.

Quandacondas, yes please. More squadron controlled megaships apart from the Fleet Carrier. Though nobody is going to be stupid enough to design a freighter ship without atleast some defences, support fleet or not. If I was a pirate I would be salivating just at the thought of easy pickings.

T
The problem with super freighters is that it introduces the concept that commanders are no longer insignificant in the grand scheme of the ED universe, something FDev built into the DNA of their game. To support super freighters would trigger a chain reaction of other changes that would need to happen. The economy for starters would have to be massively overhauled. You can't just have magic resource values at each location, which currently only serve to encourage commanders to transport the most profitable good. With super freighters, commanders need to pony up and deliver the less than profitable foodstuffs and power generators to keep habitats and moon bases operational and producing other goods at a real-time rate. There would have to be a sense of believable conditions and user feedback in the economy. It would essentially turn the game into the X-series.

While I wouldn't object to that and I always wished there was more to ED's economy, I just don't think that vision aligns with FDev and their concept of what ED is and isn't. Just got to get use to being the little guy and let those Thursday night restarts dictate the future of the universe

^
It's the same with fleet carriers though, which FDev are introducing. Thing is though everybody start off as the little guy, but CMDRs that group together and (and super engineer their ships to god mode) can make huge differences on the BGS. 4.4 looks like it will making the effect of CMDRs much larger.


Super Freighters always wanted to see them, not as big as megaships but active large cargo carriers.
Yes, made of glued together ship hulls!!!
Click to expand...

Repped for the artwork :O

PS I think I would have an irritable urge to drop this at the Exclusion zone of an O-class star [haha]
Last edited: Feb 10, 2018

Sure looks cool! Also makes a lot of sense to bulk freight stuff across the universe instead of small ships transportation. But such ships would need escort.

TheNut said:
To support super freighters would trigger a chain reaction of other changes that would need to happen. The economy for starters would have to be massively overhauled. You can't just have magic resource values at each location, which currently only serve to encourage commanders to transport the most profitable good.
Click to expand...

A massive overhaul you say i think i know the best way for that to happen. HEY HEY THARGOIDS!! OVER HERE YOOOHOOO... hahaha