The 2019 Commander Awards: Your Ship of the Year

Just for fun, chat about what ship in your fleet brought you the most fun, pride and satisfaction for this year.

I think I'd have to give it to Excelsior. She carried me into the black for Distant Worlds II, and boldly took me to places I had never been before: 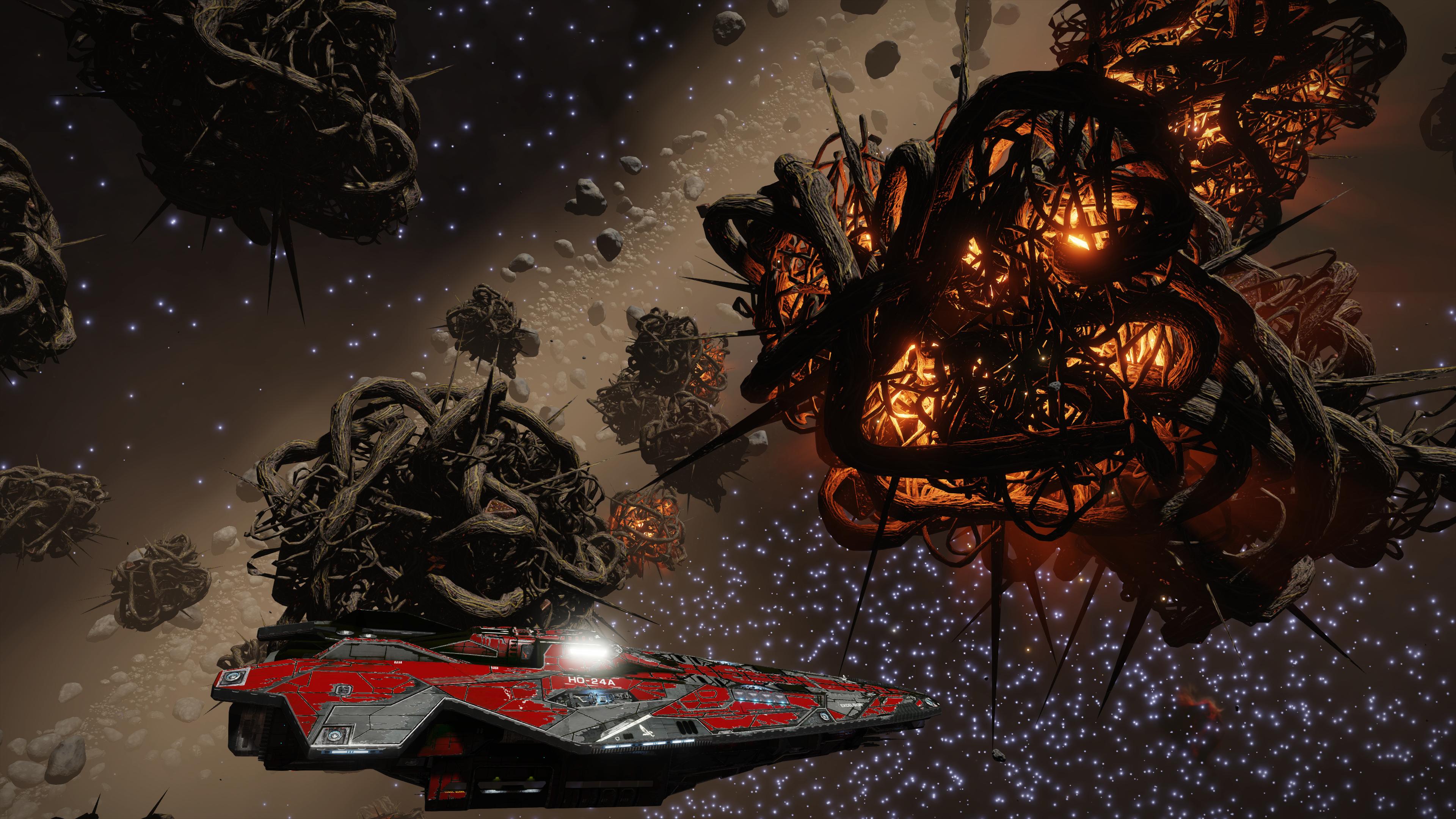 For eight months, she handled everything I threw at her, and then some. I gladly handled the 0.5B CR in exploration data and the sights I've seen.

N
My Cobra MKV.
Because it's one more exclusive than the MKIV

For me it’s the Endurance. Not only did she get me to Beagle Point and back on Distant Worlds 2, but shortly afterwards I completed The Great Escape, flying her to 3,393LY below the galactic plane - and back. 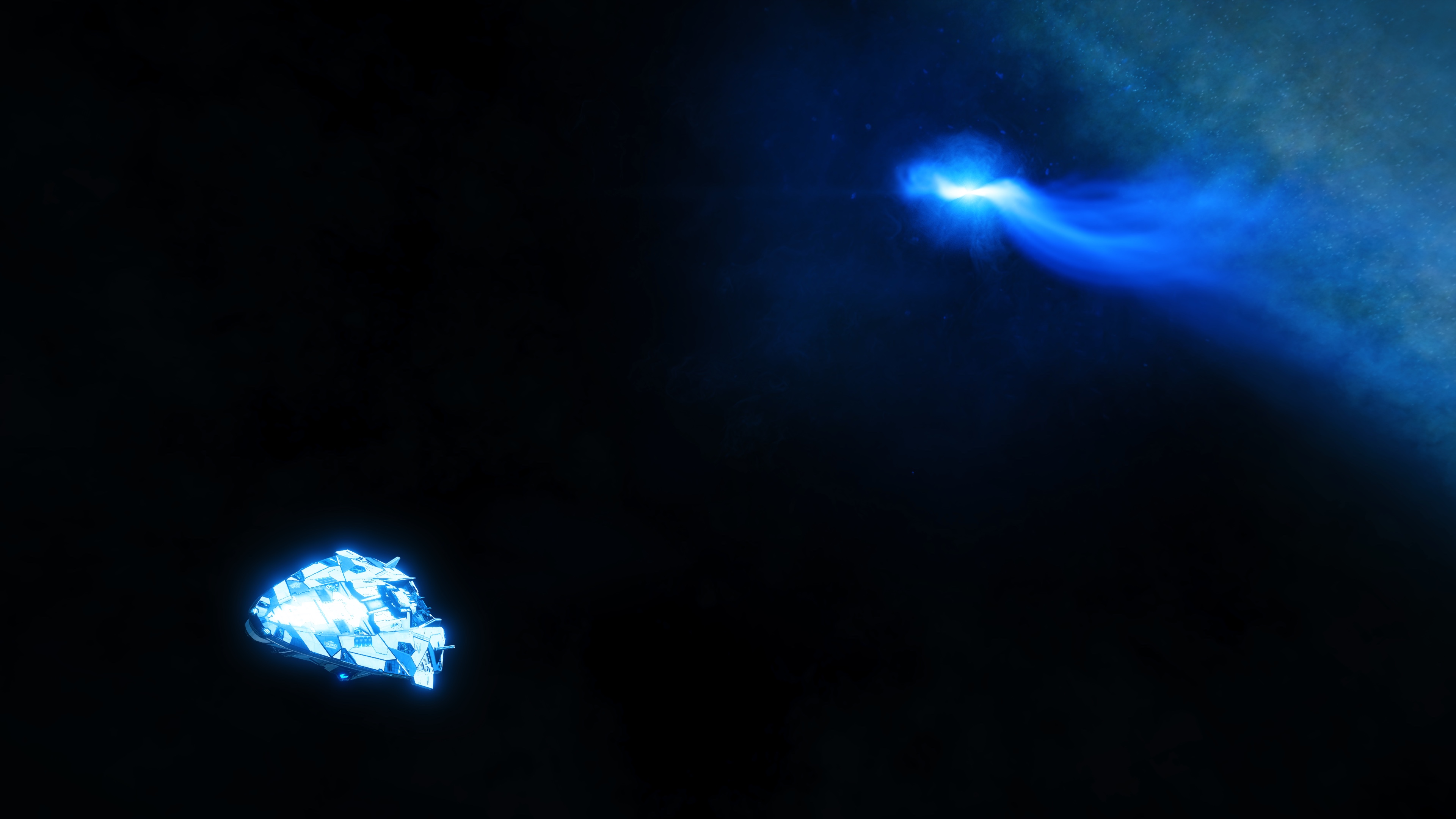 Waiting for that guy with the combat Beluga to show up

Beluga liner. It does everything i want it to extremly well, and ive flown it almost exclusively for 8 months

Federal Slopship. Most fun to fly for me.

Mamba, because when I came back it was a new ship and I like the way it feels. It's like a FDL, but with a little bit more firepower and better hardpoint placement, and the most important thing: a good canopy view.

Since returning from Distant Worlds II I’ve been spending a lot of time in my Eagle, Little Raven. I passed the Eagle by early on in the game but decided it would be a good (and very cheap) way to improve both my fixed weapons skills and my pip management.

I’ve really come to enjoy flying it and am playing around more and more with FA off, not successfully but fun all the same. In VR the cockpit is fantastic.

All in all she’s been so good to me I treated her to a nice Midnight paintjob the other day. Now she looks like a true Raven.

'Artemis' my Phantom, on Beagle Point tour. I skipped DW2, because of my exploration 'style', if I want to do something else, then I run home. But - it looks like - things are change since I ran out personal goals, my plan is to fly almost around the Galaxy. I just want to put a bookmark most of the sectors on the map, today was a good start on my first visit in Dryman's Point.
By the way Artemis is retired after that journey. I'm in 'Lisa', she my #3 explorer Phantom, built for extreme long trip. I know she can handle it, to say the same about myself... Well, we will see.

Hard to say, there are a lot of ships i really love. And this also was my first year of playing ED.
But lately i'm having a lot of fun in my DBS

So everyone is just going to nominate their own personal ship ….. wow!

M00ka said:
So everyone is just going to nominate their own personal ship ….. wow!
Click to expand...

Ofc, you think i care about someone else ship?

I mean, well, you know... I'd have to go with my Vulture, The Ronin again this year, since I took it out on DW2 to Beagle Point roundabout back to Jaques Station in Colonia and am still out in the black now on my roundabout way back to The Bubble Mk I – in other words, it's basically the only ship I've used this year.

Perhaps not the most apt ship for traveling while on an expedition, but still one of the most enjoyable to pilot and go exploring in, in my opinion. 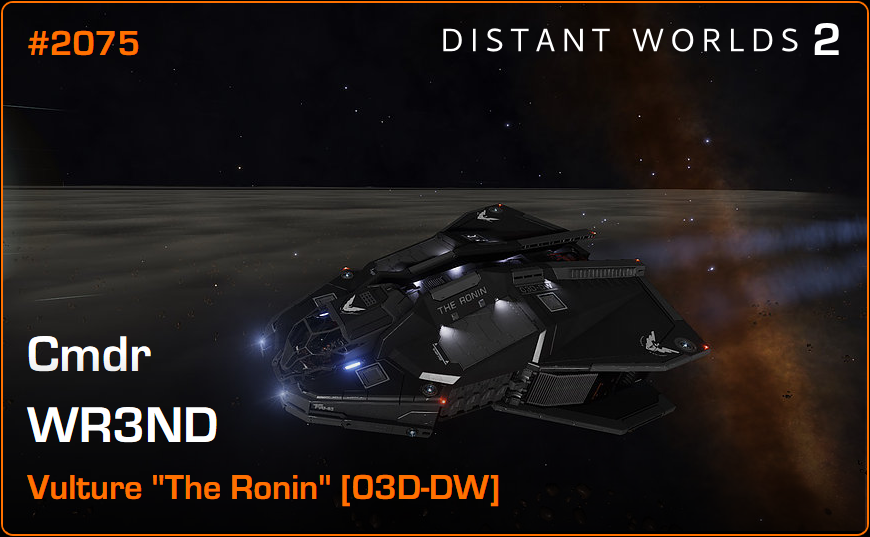 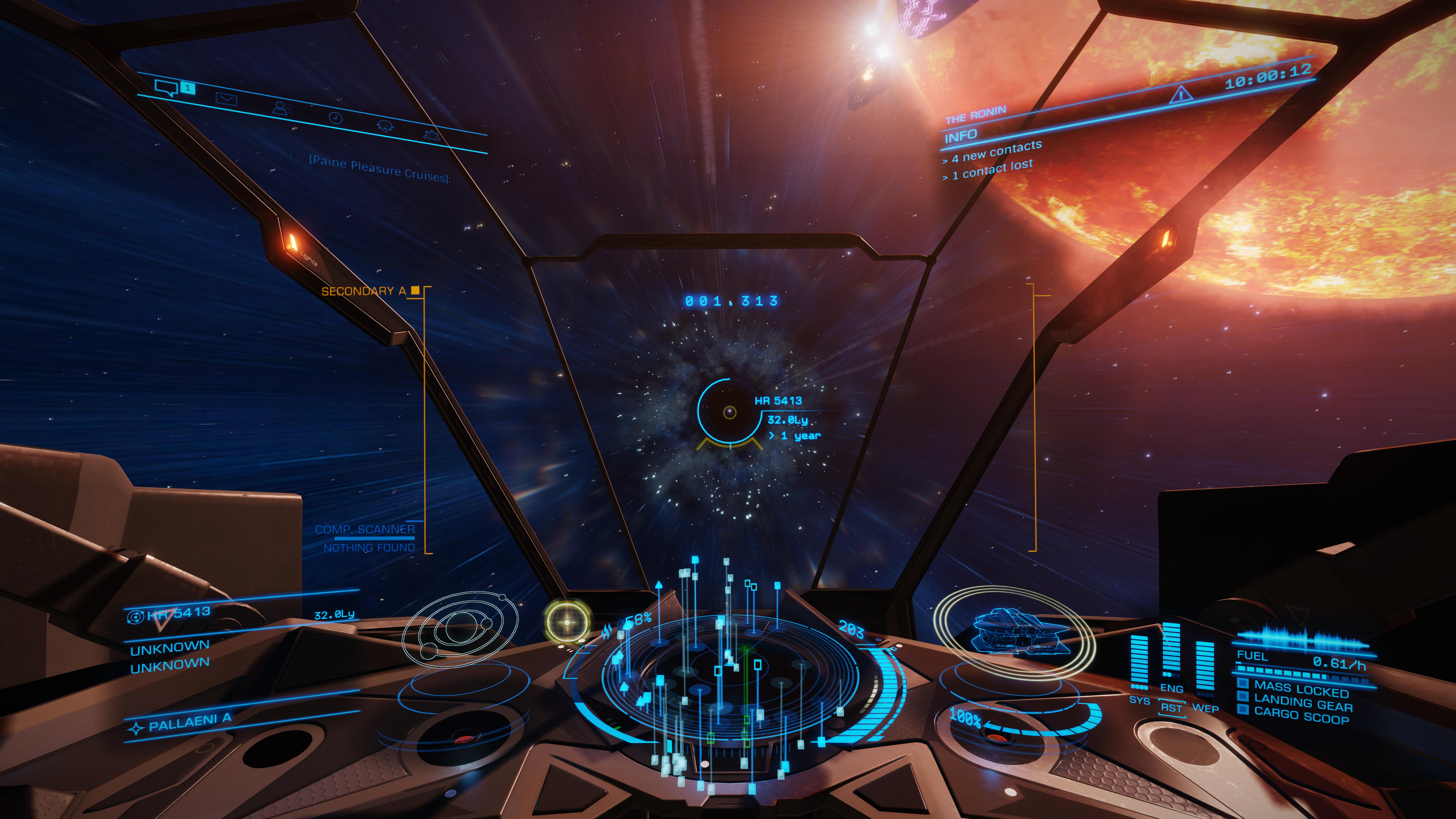 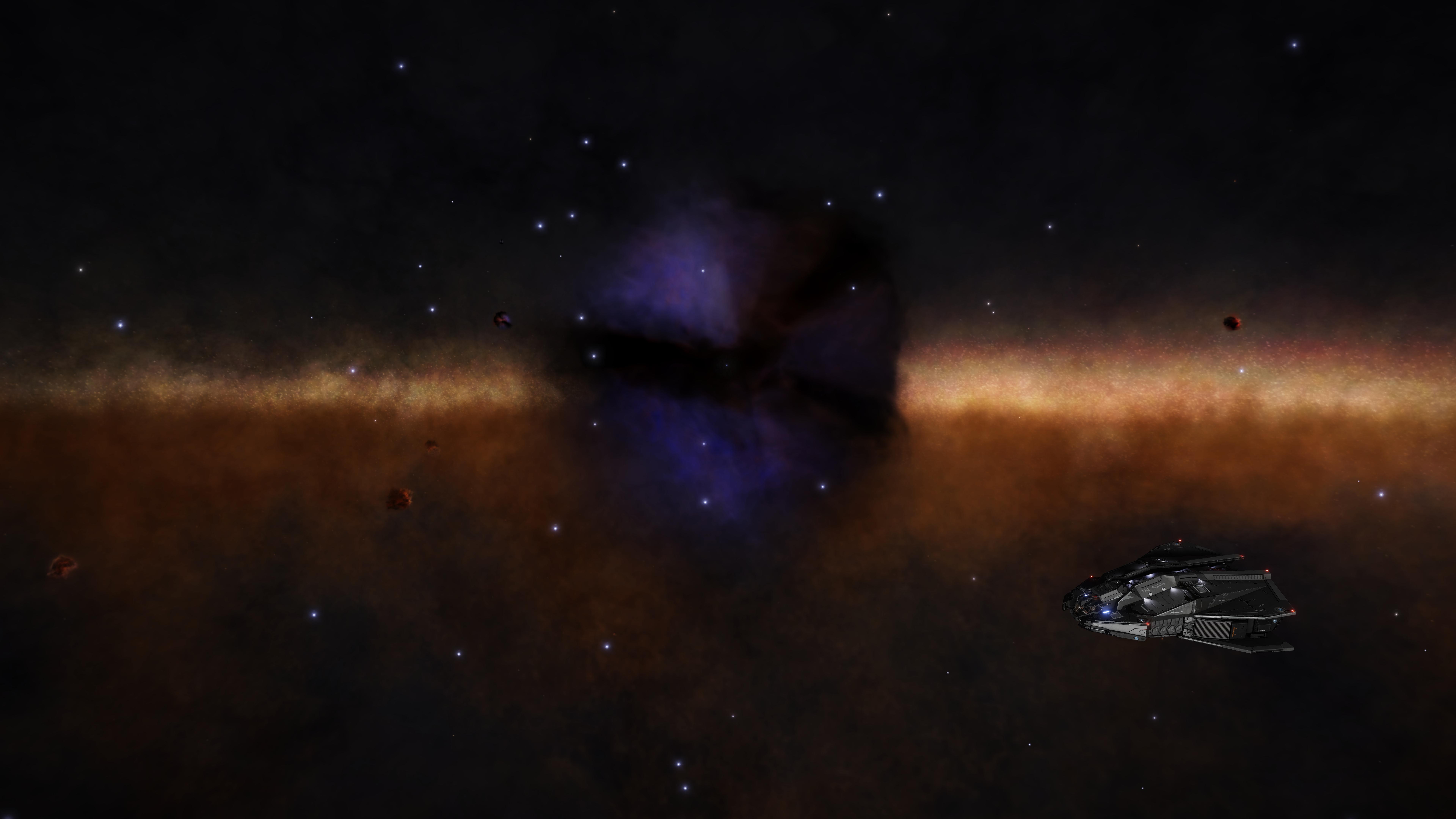 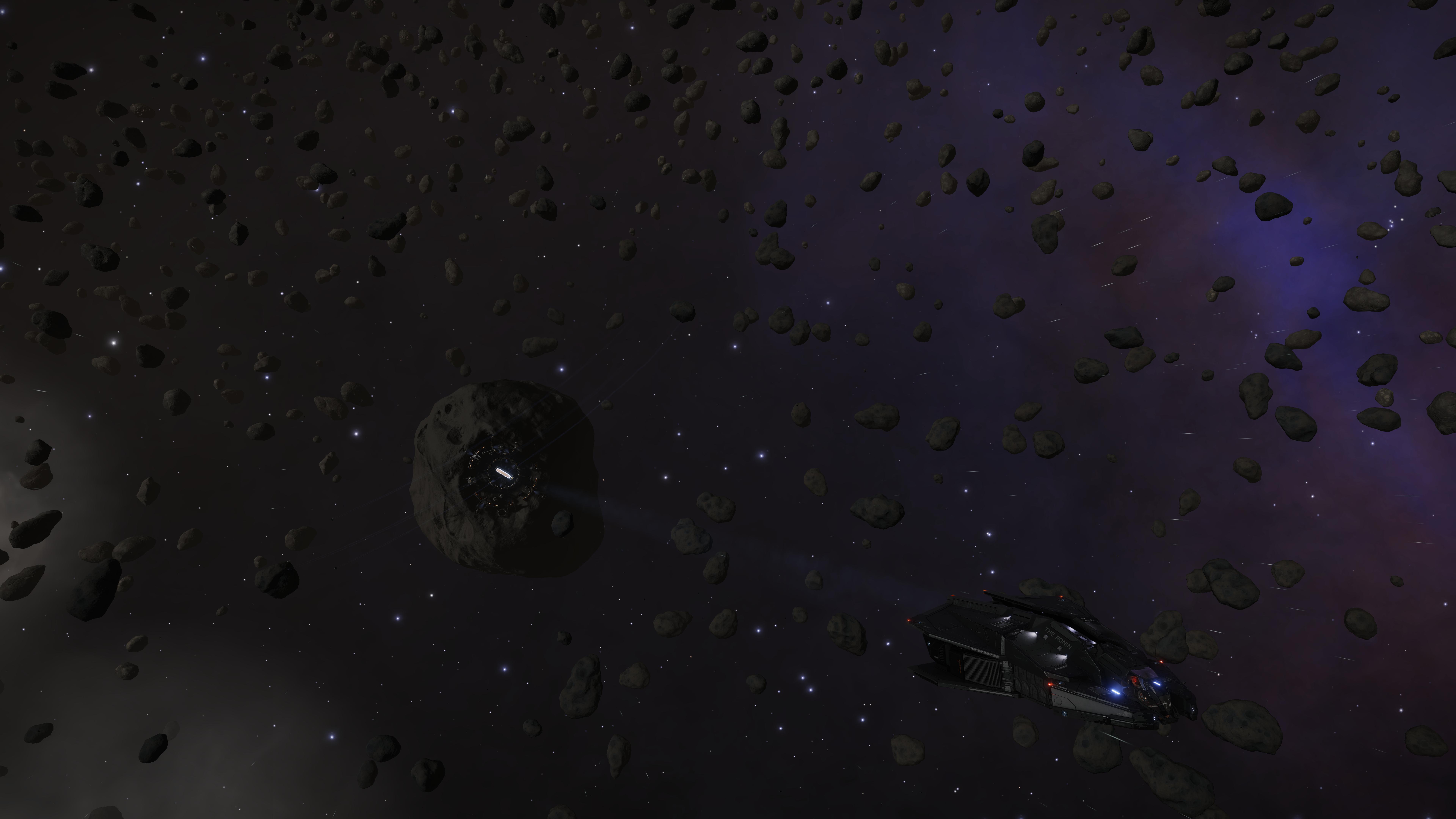 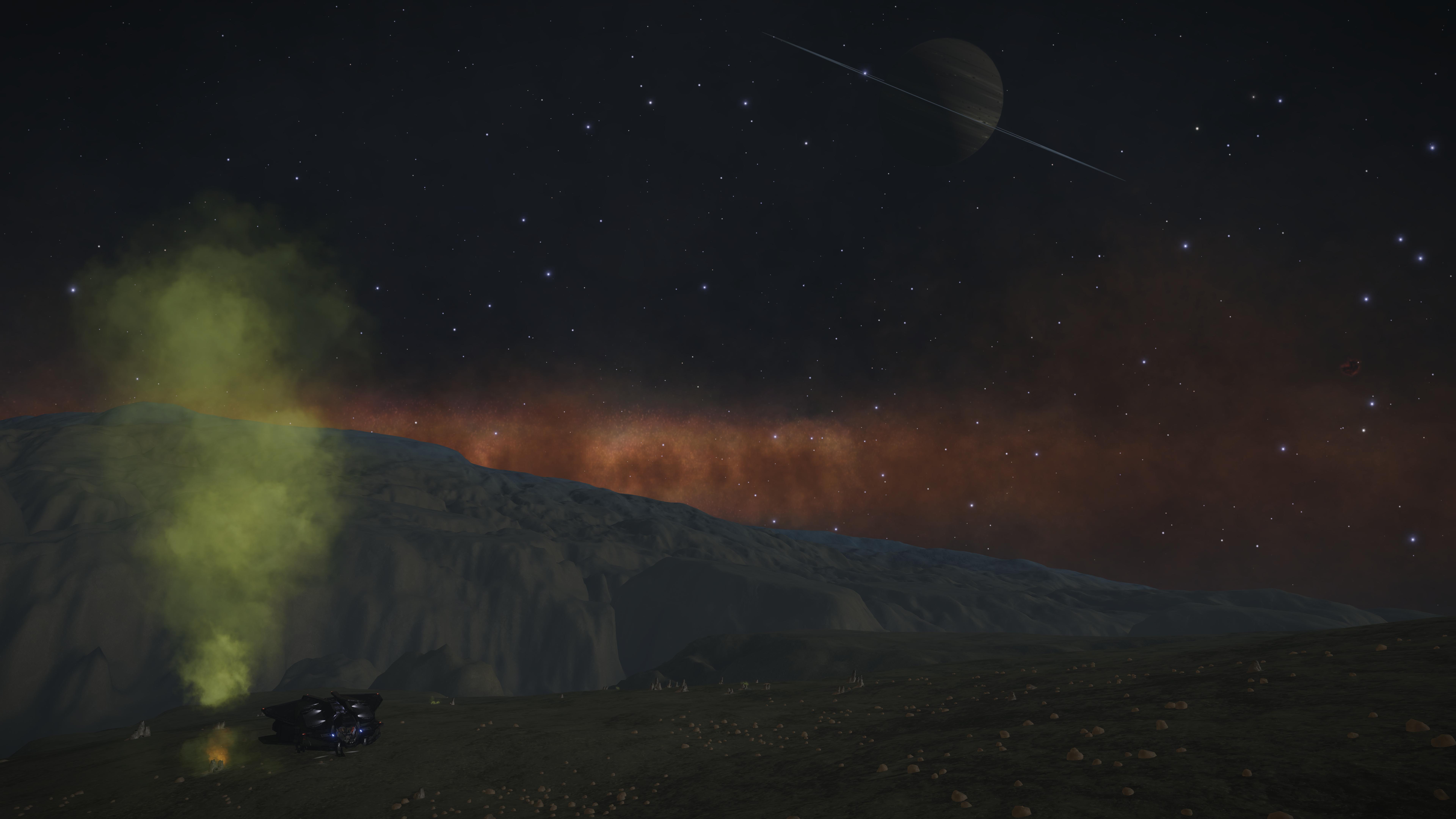 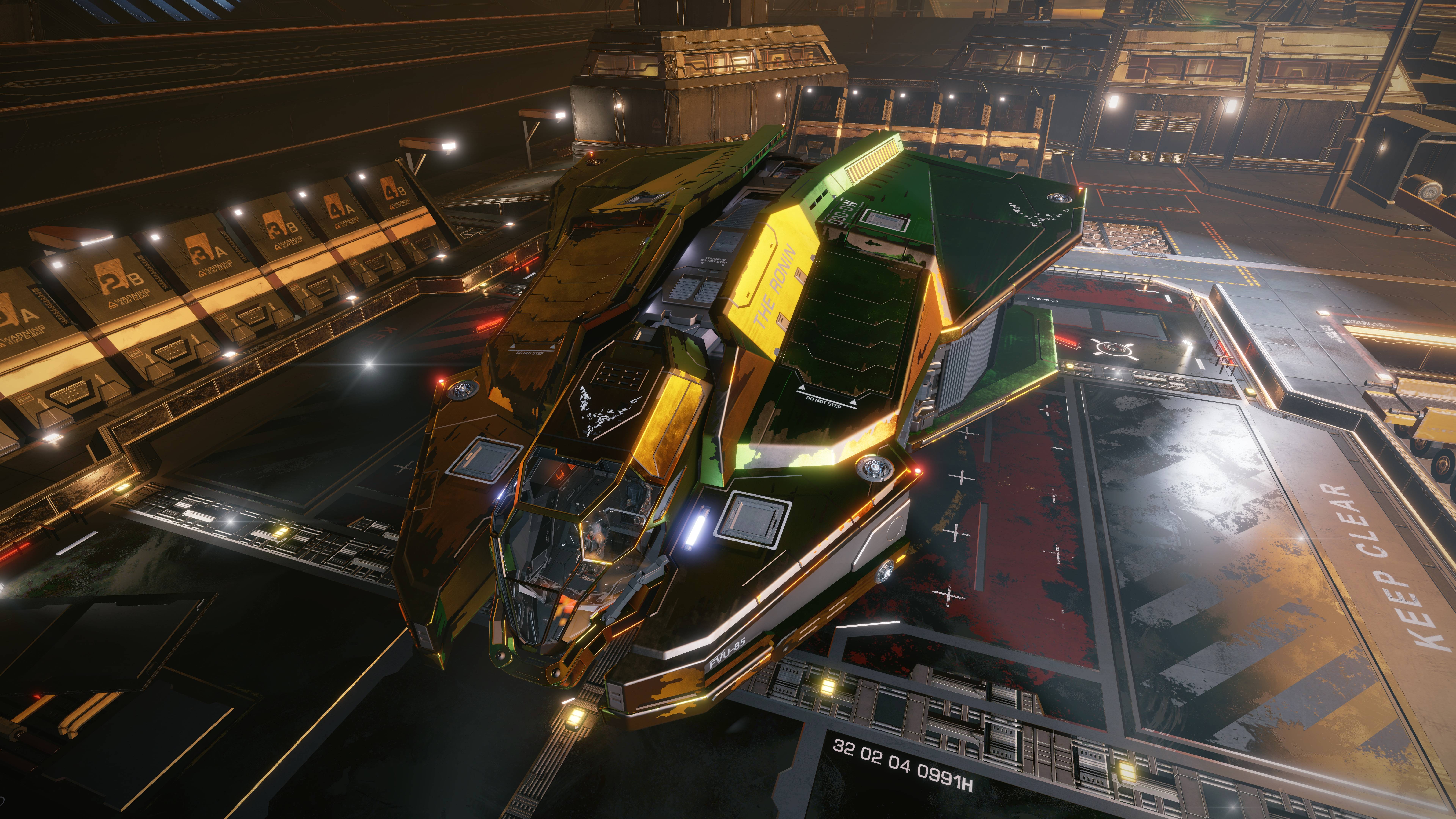 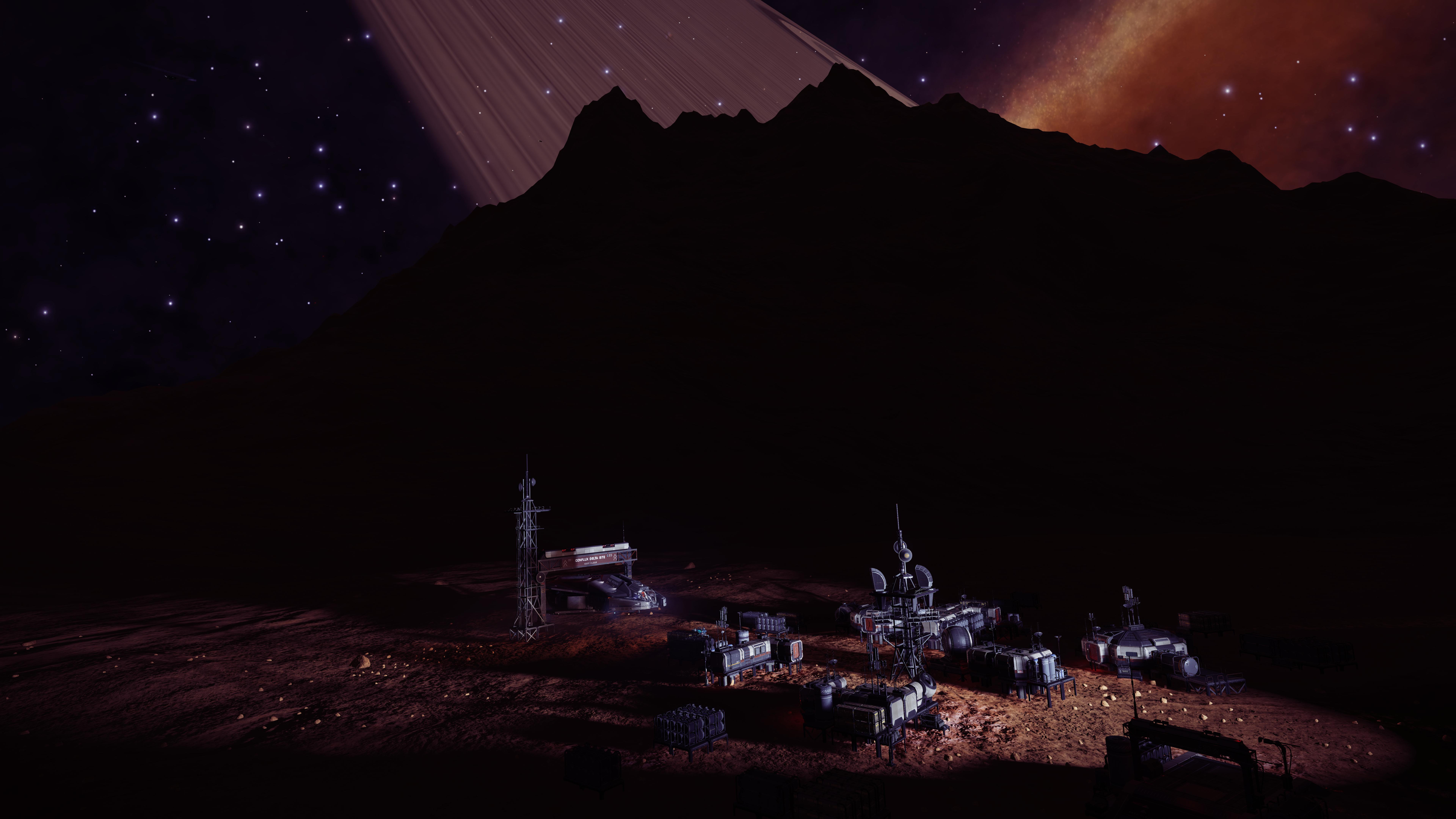 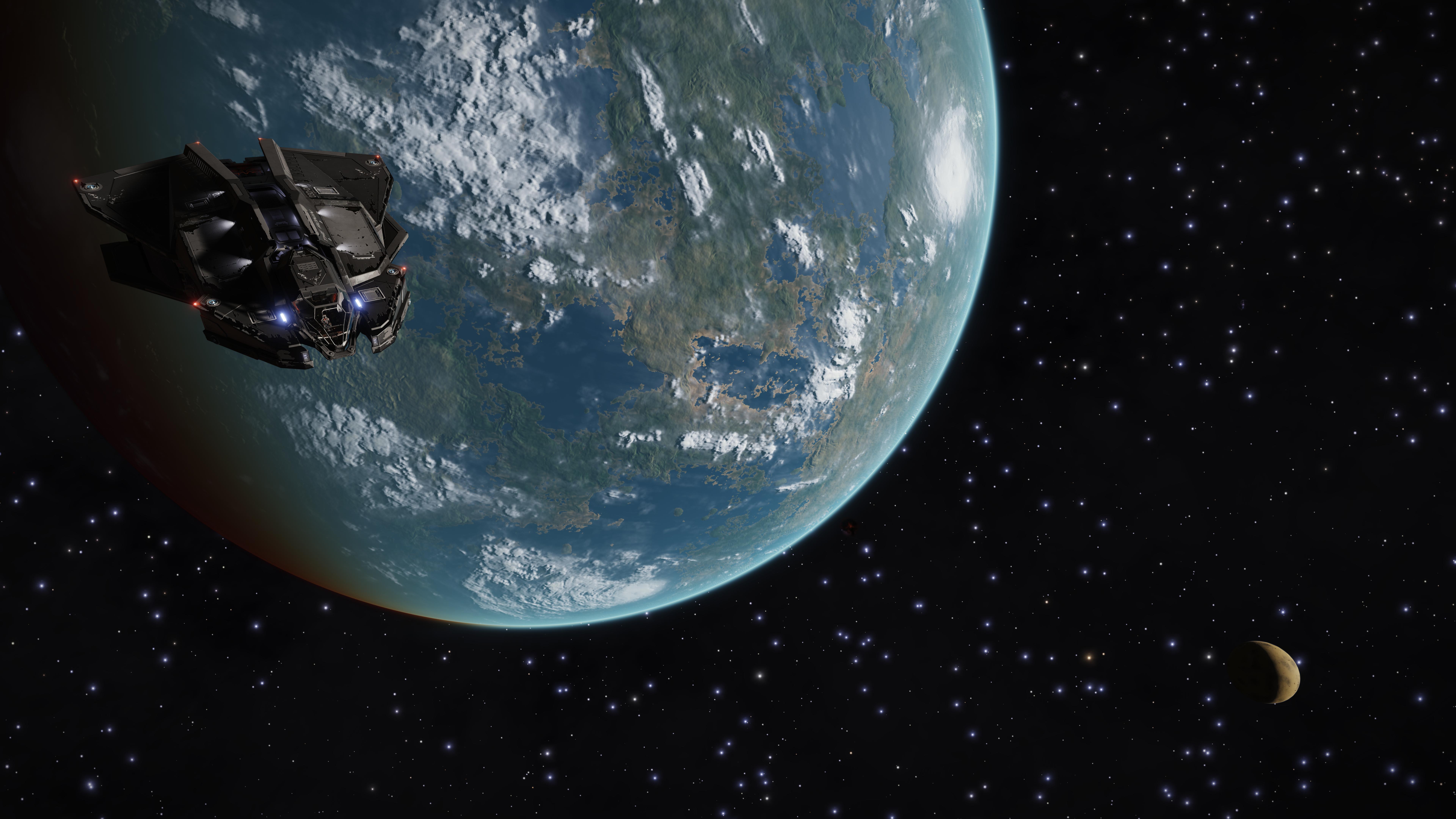 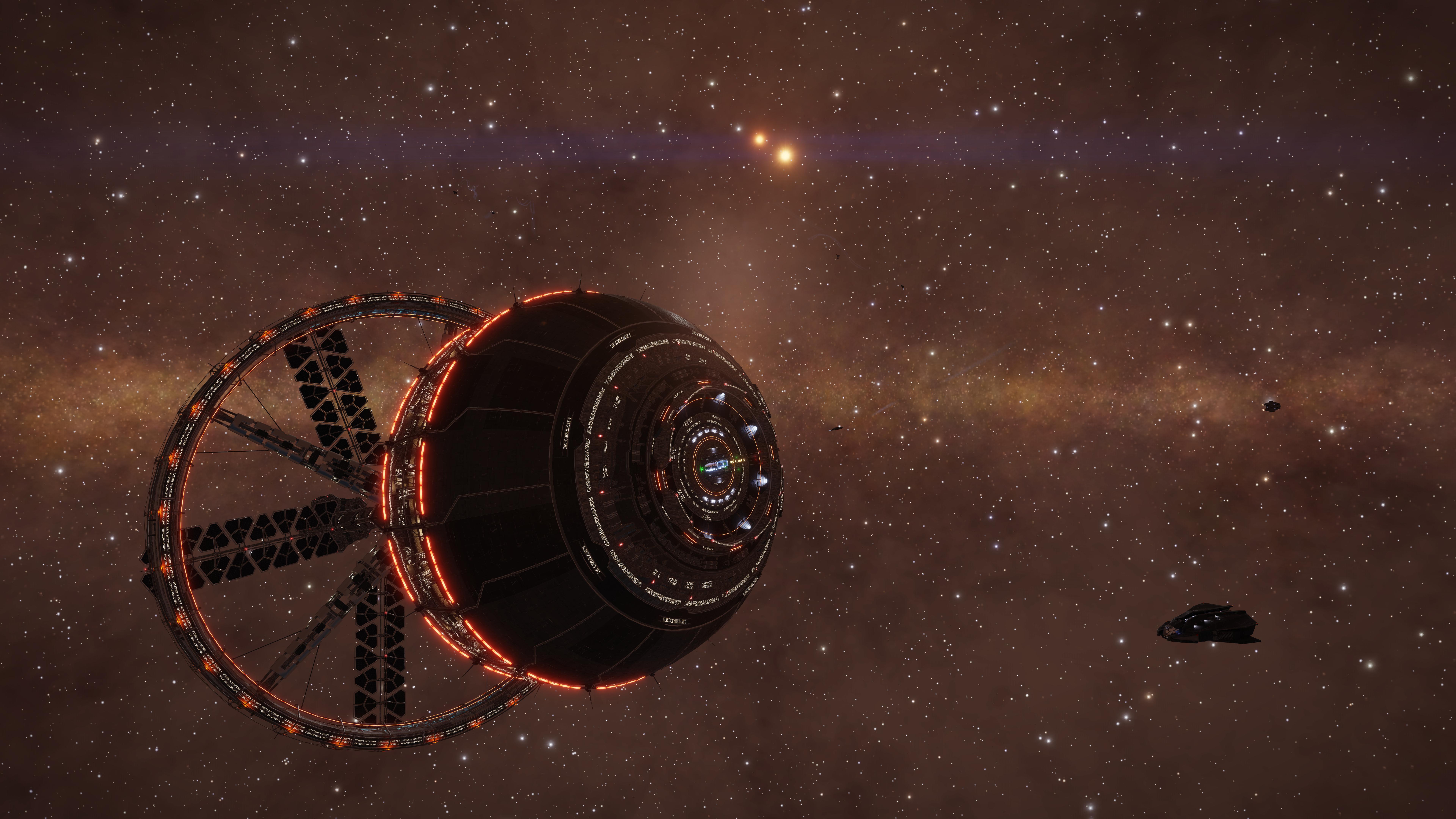 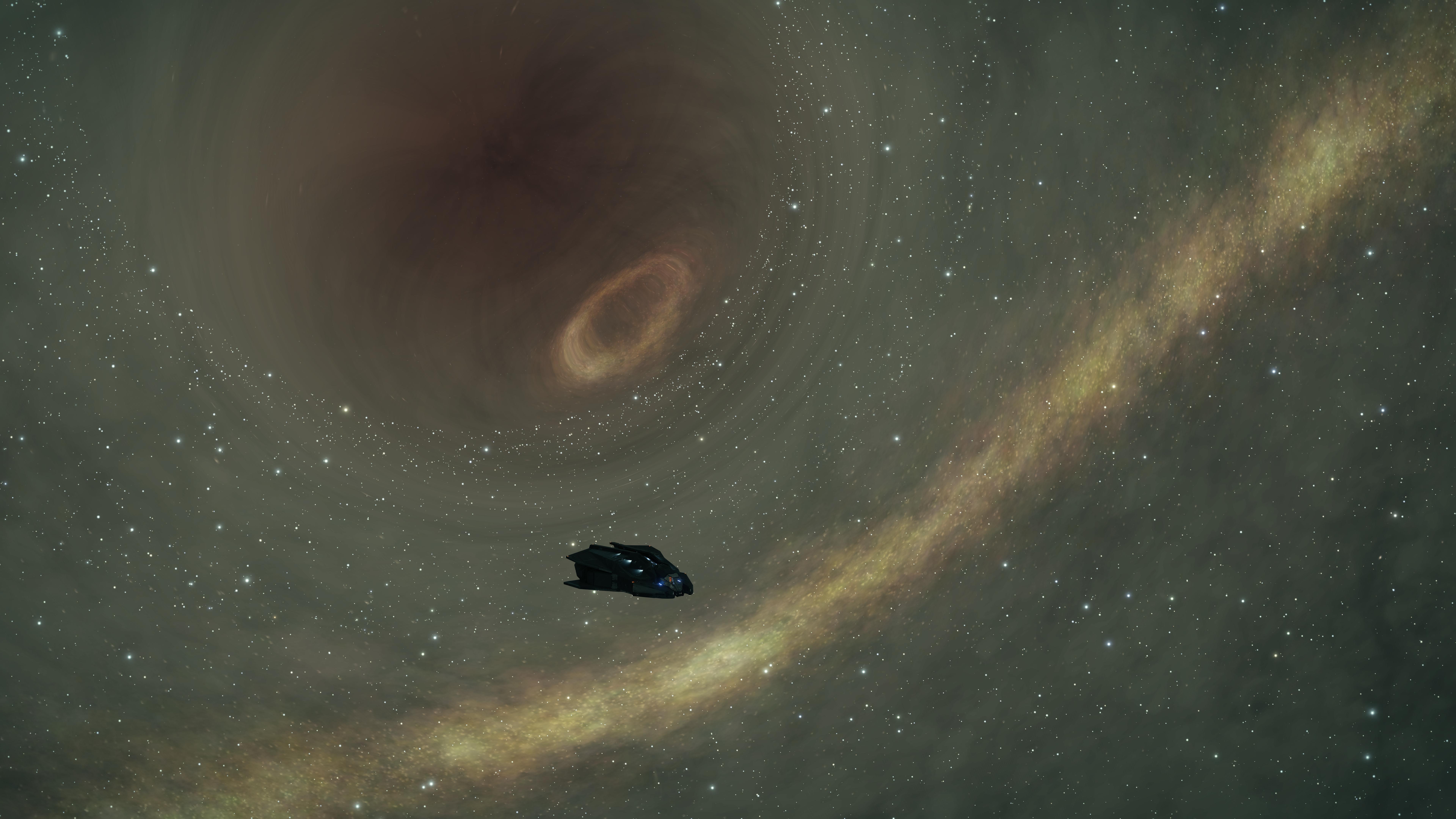 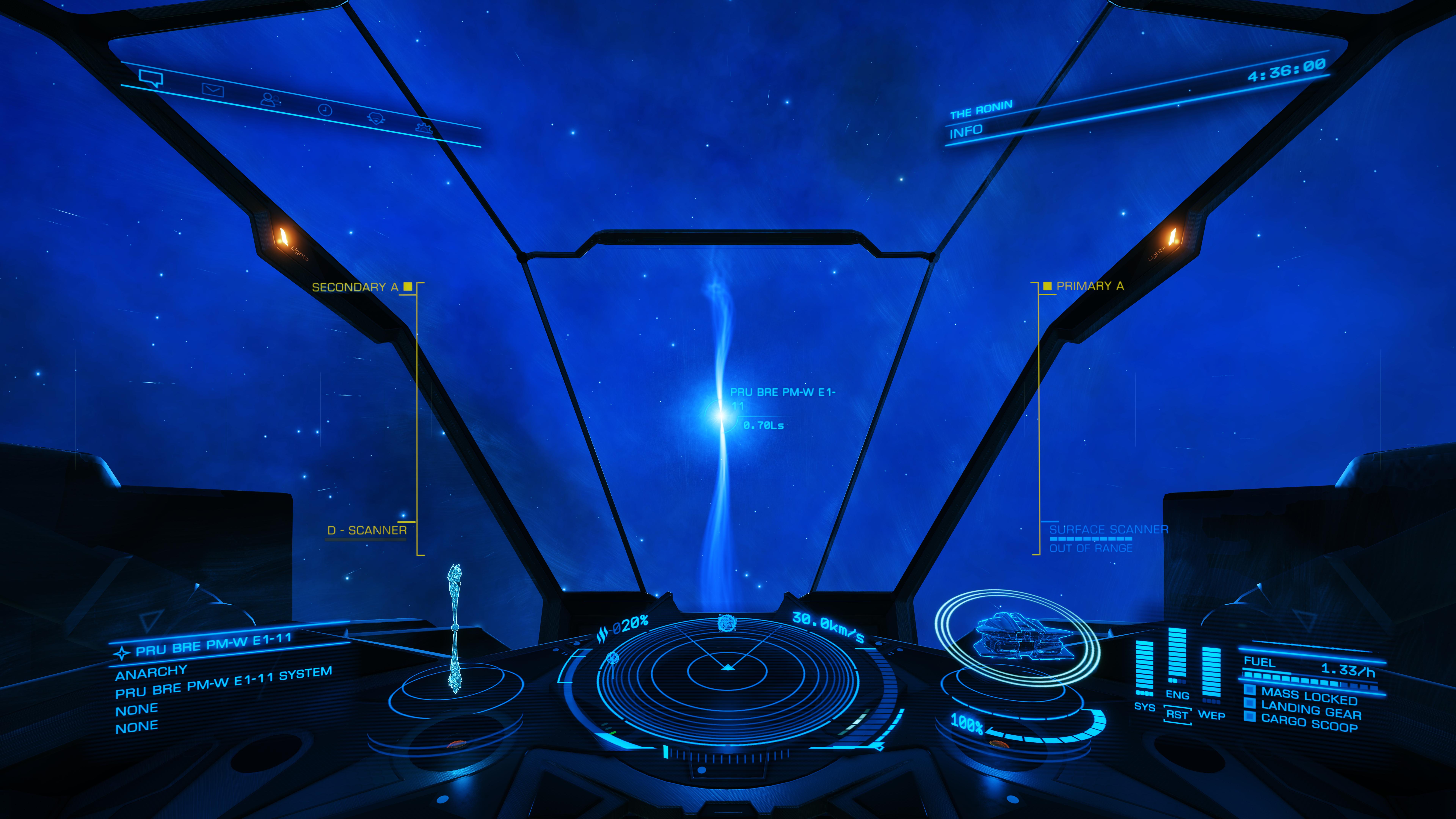 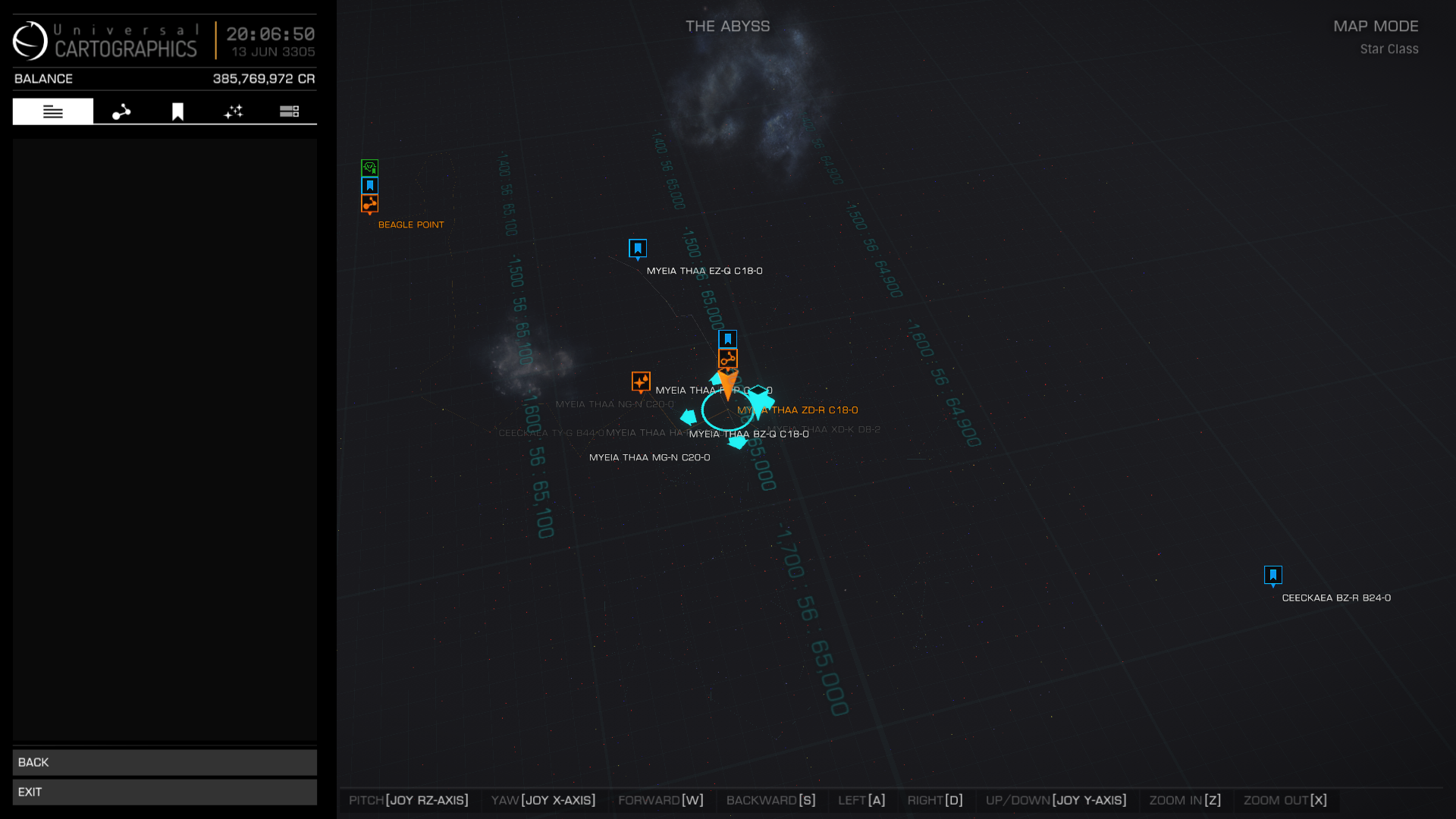 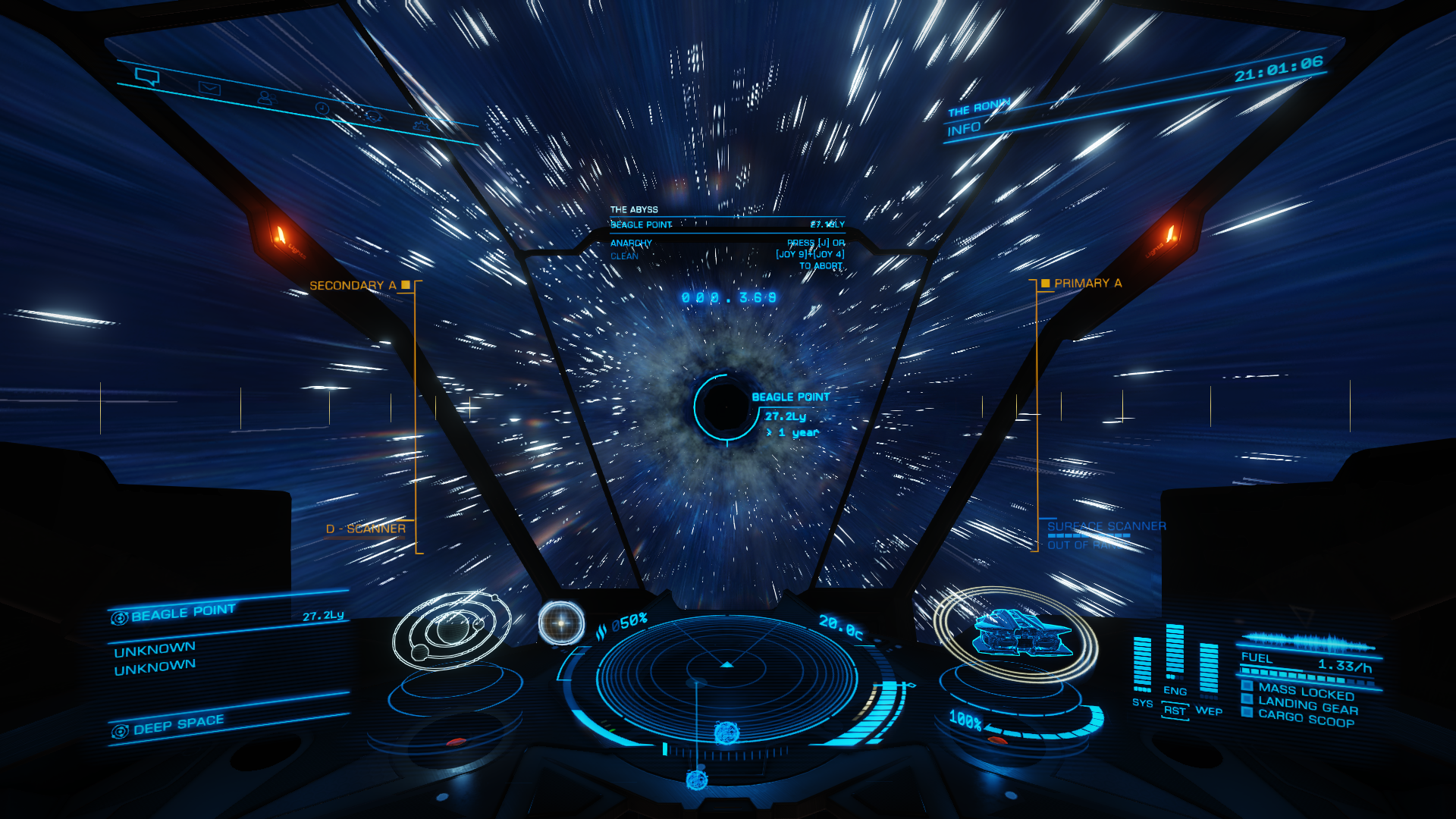 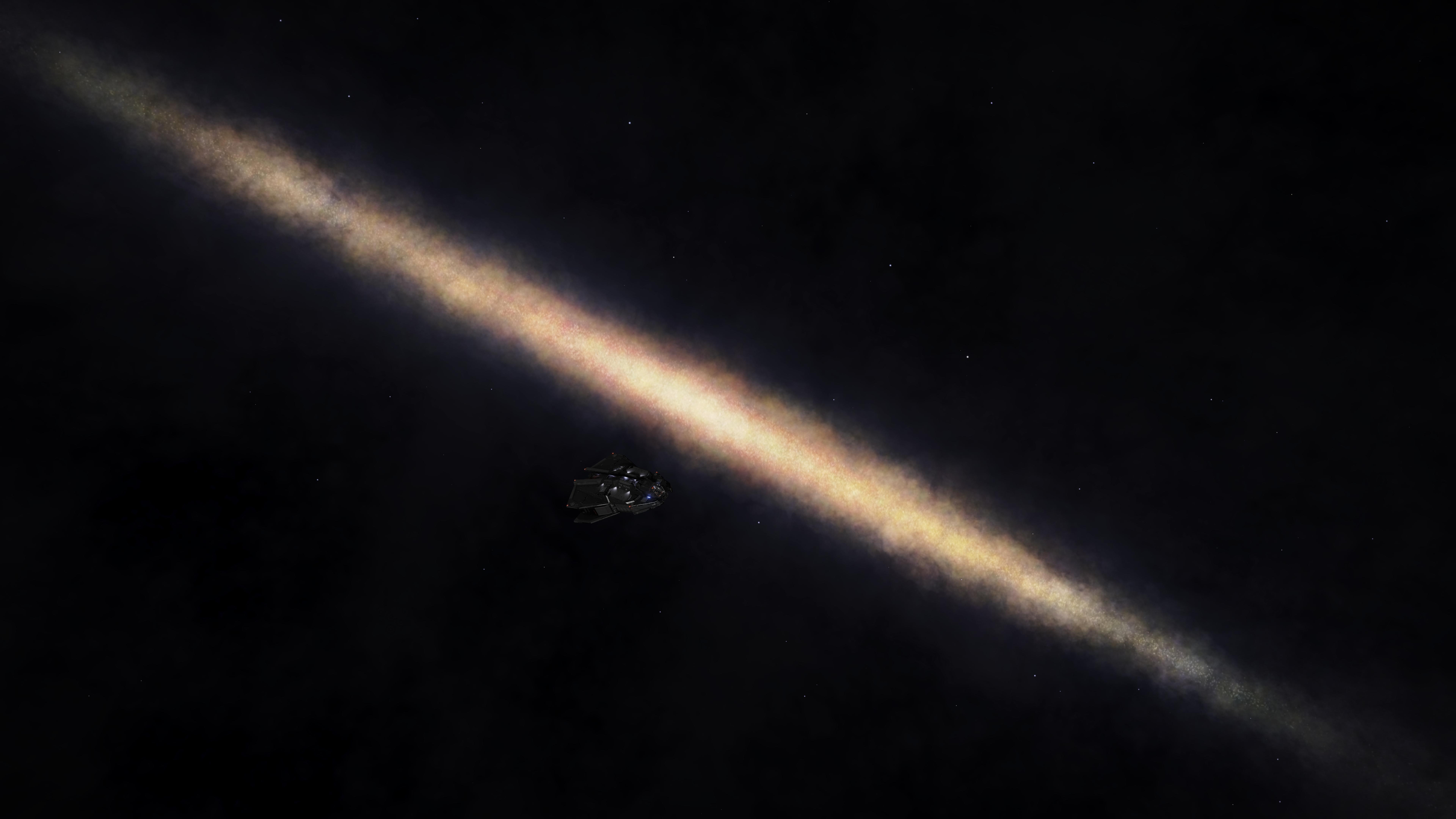 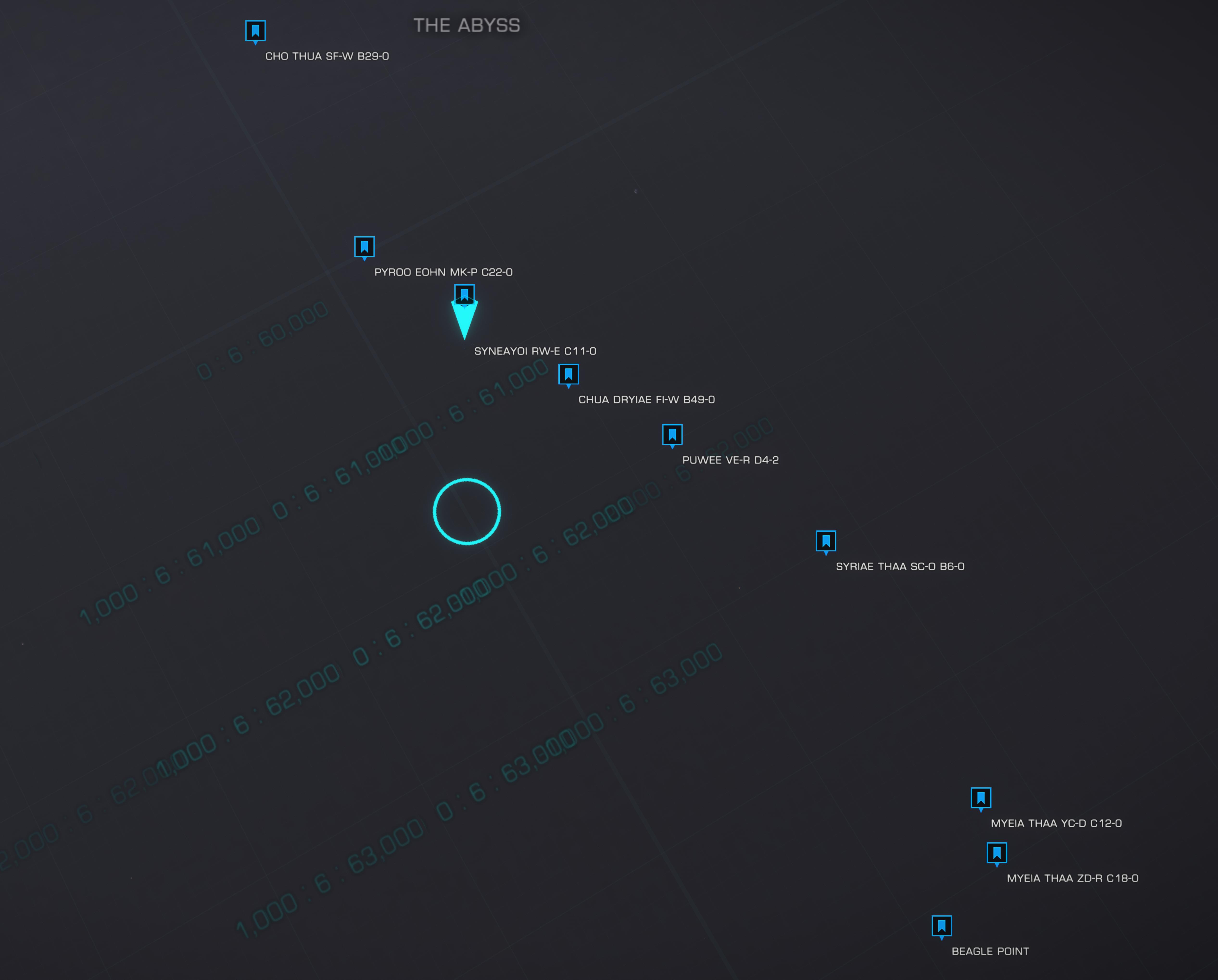 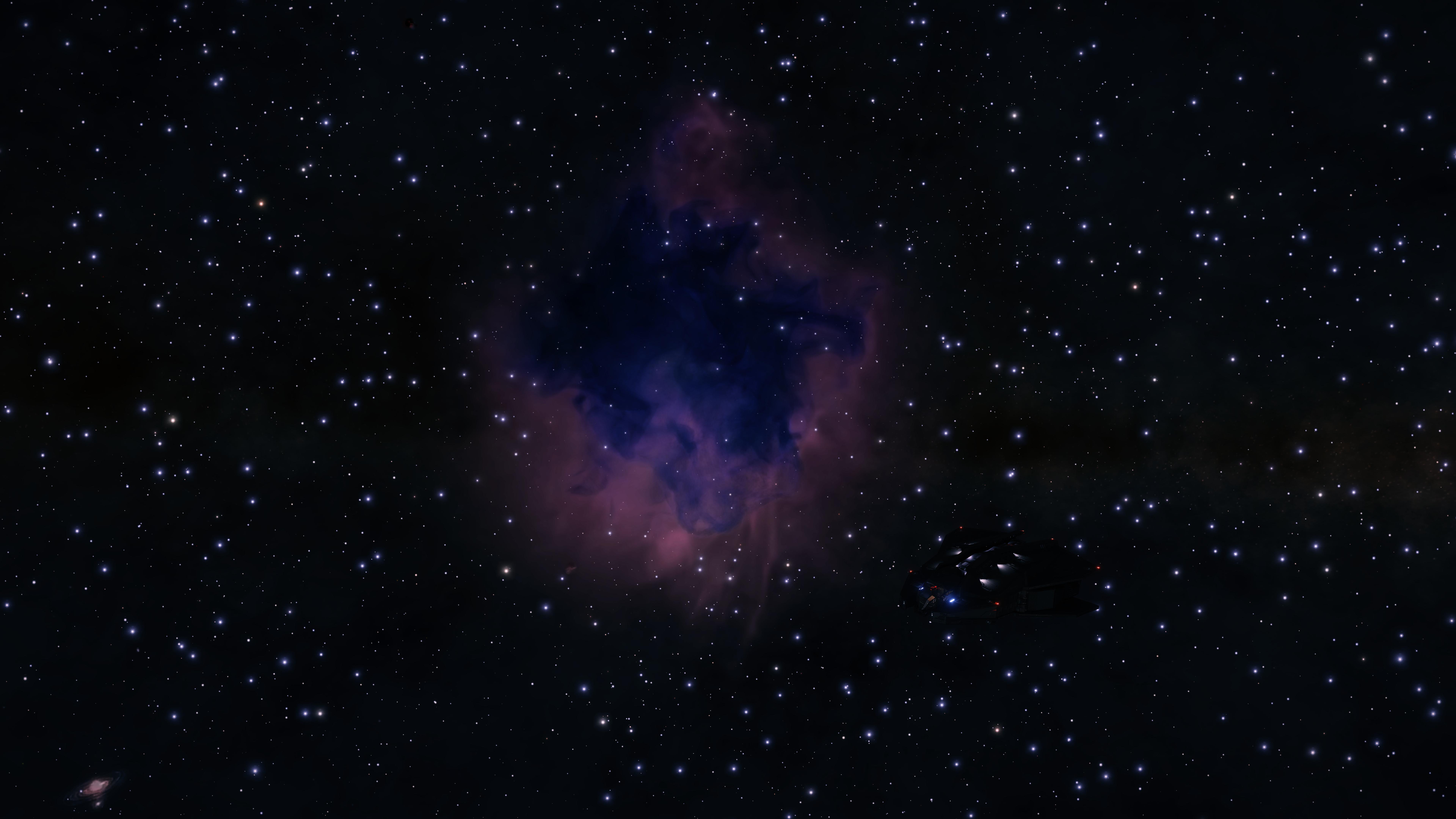 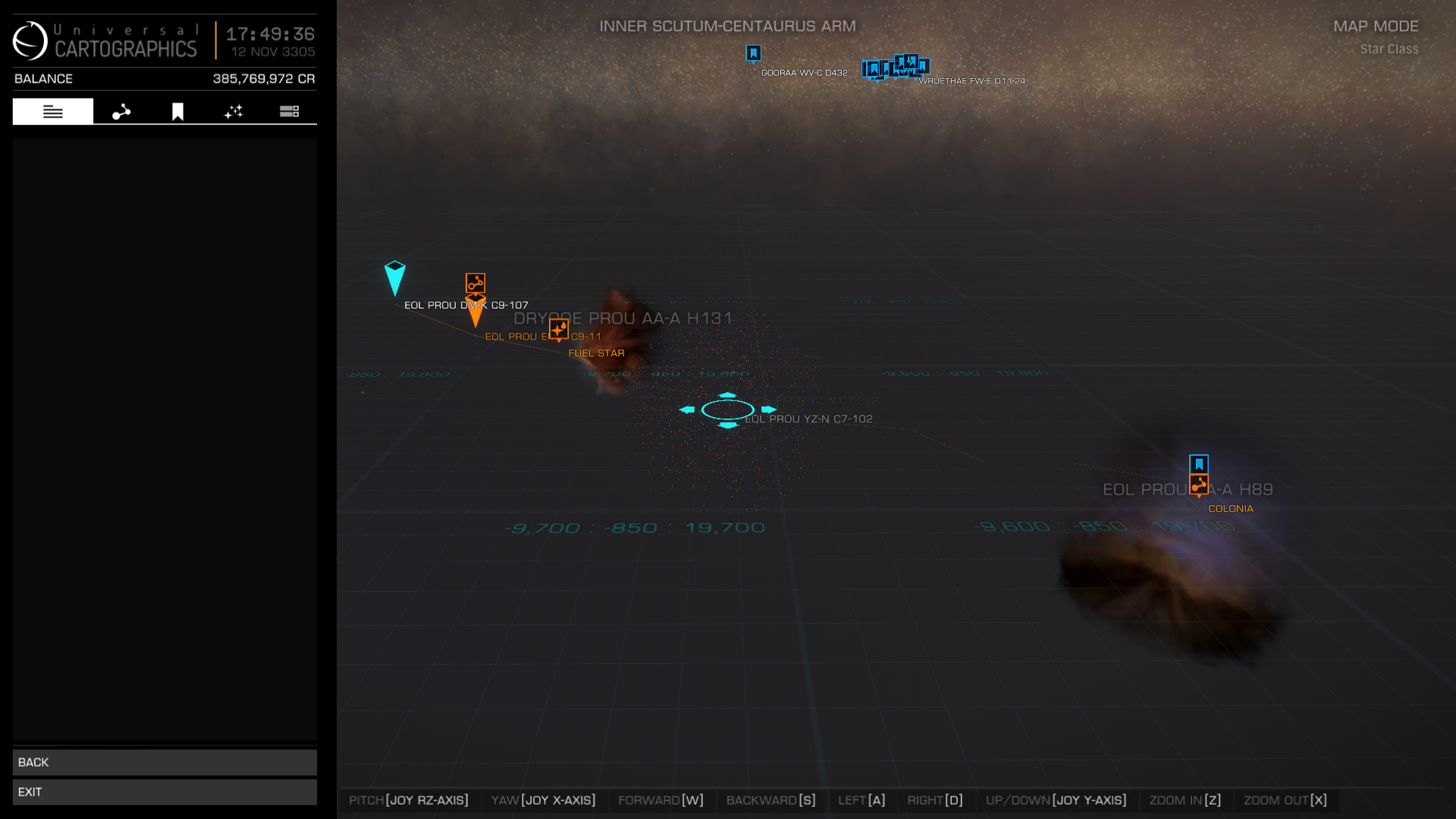 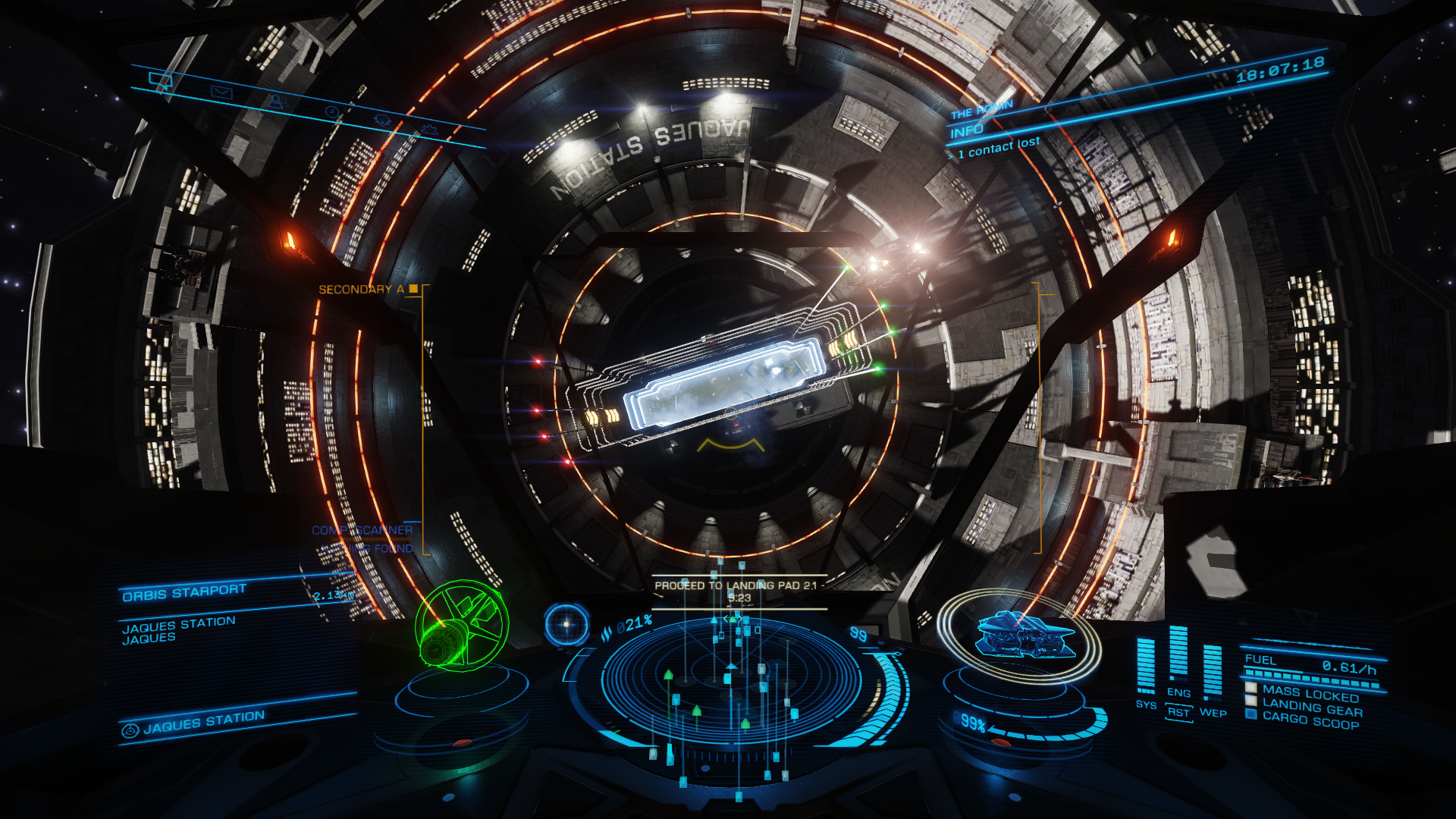 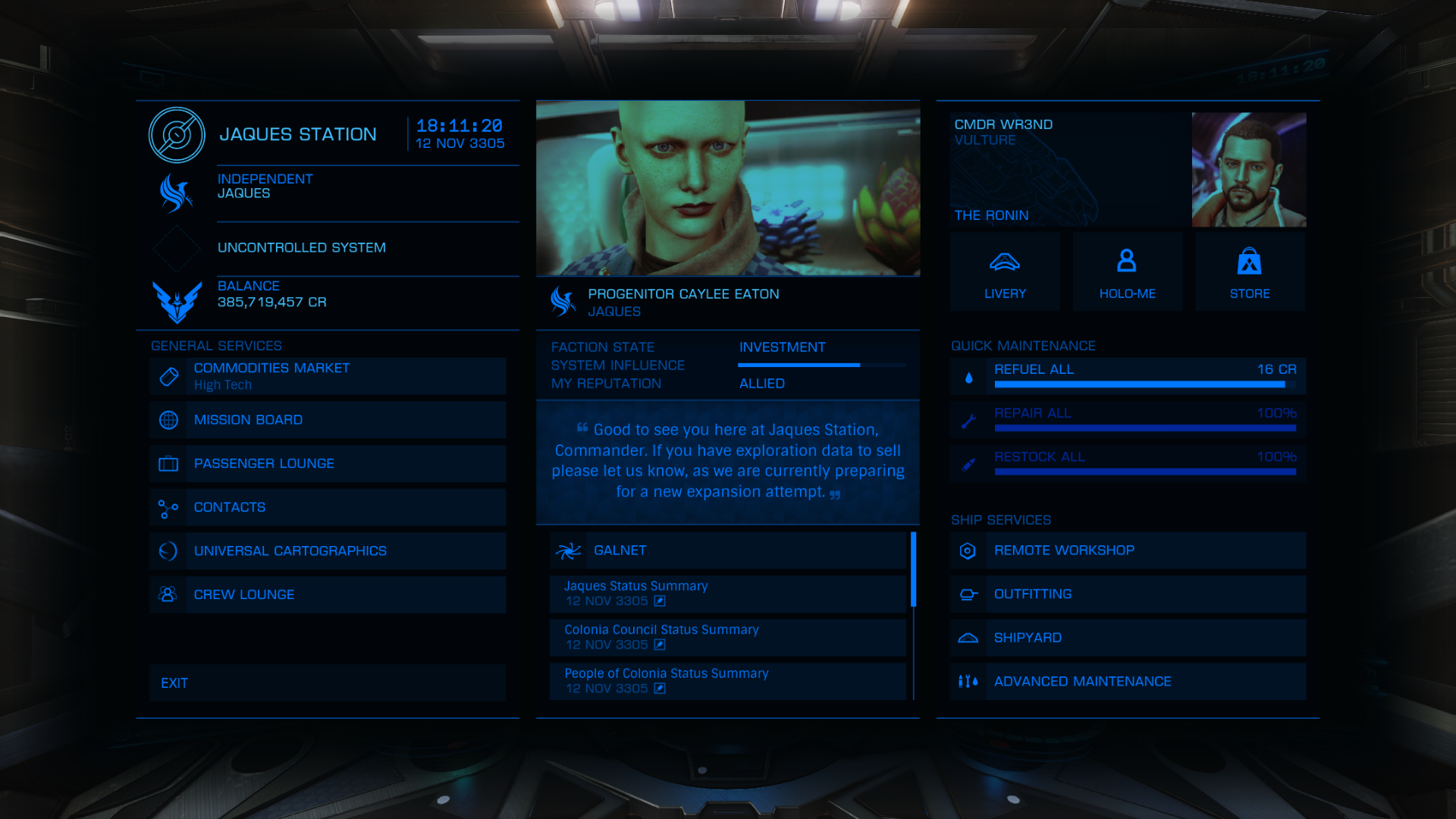 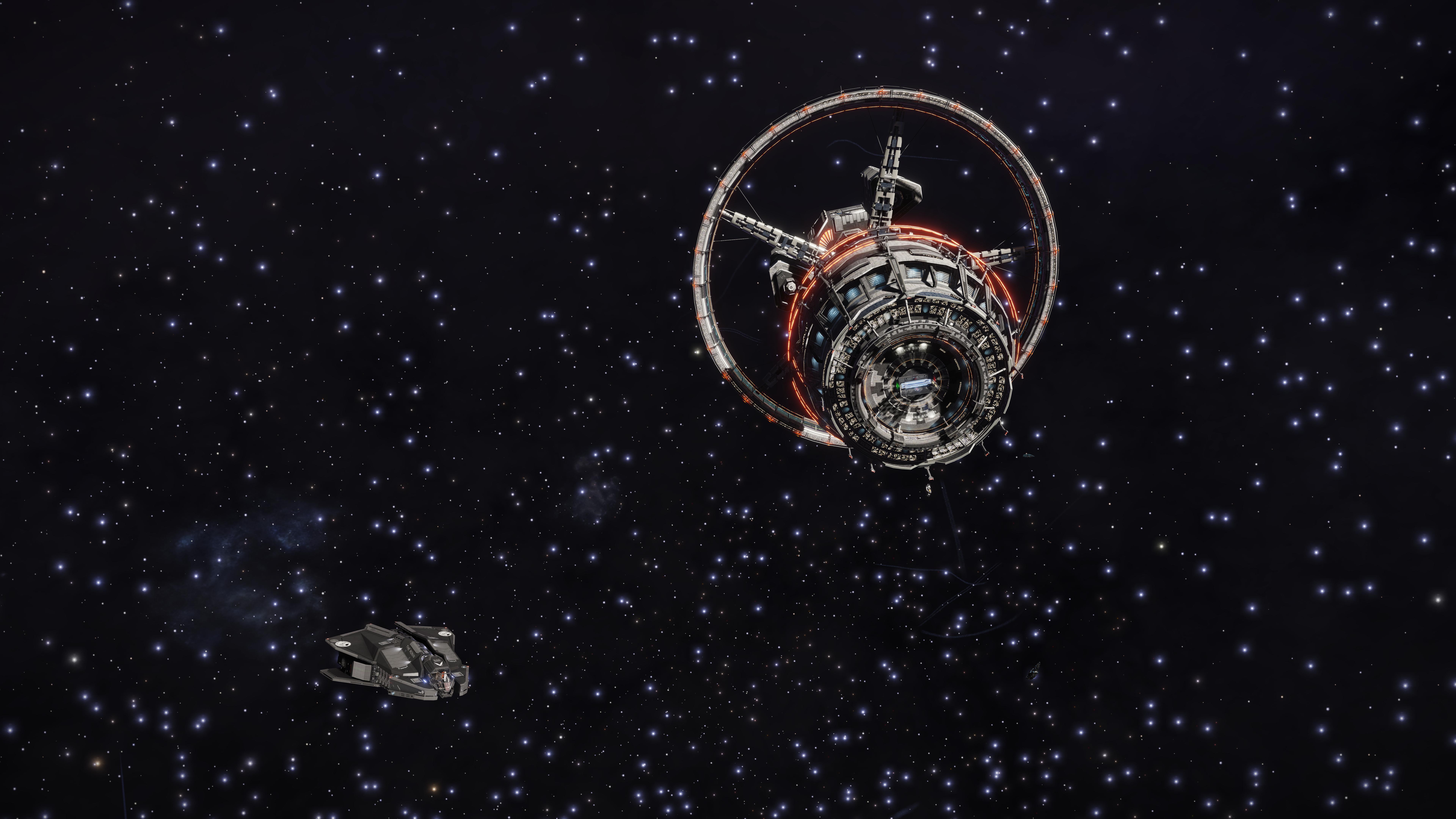 By a WIDE margin, I give it to my blood-red baby: 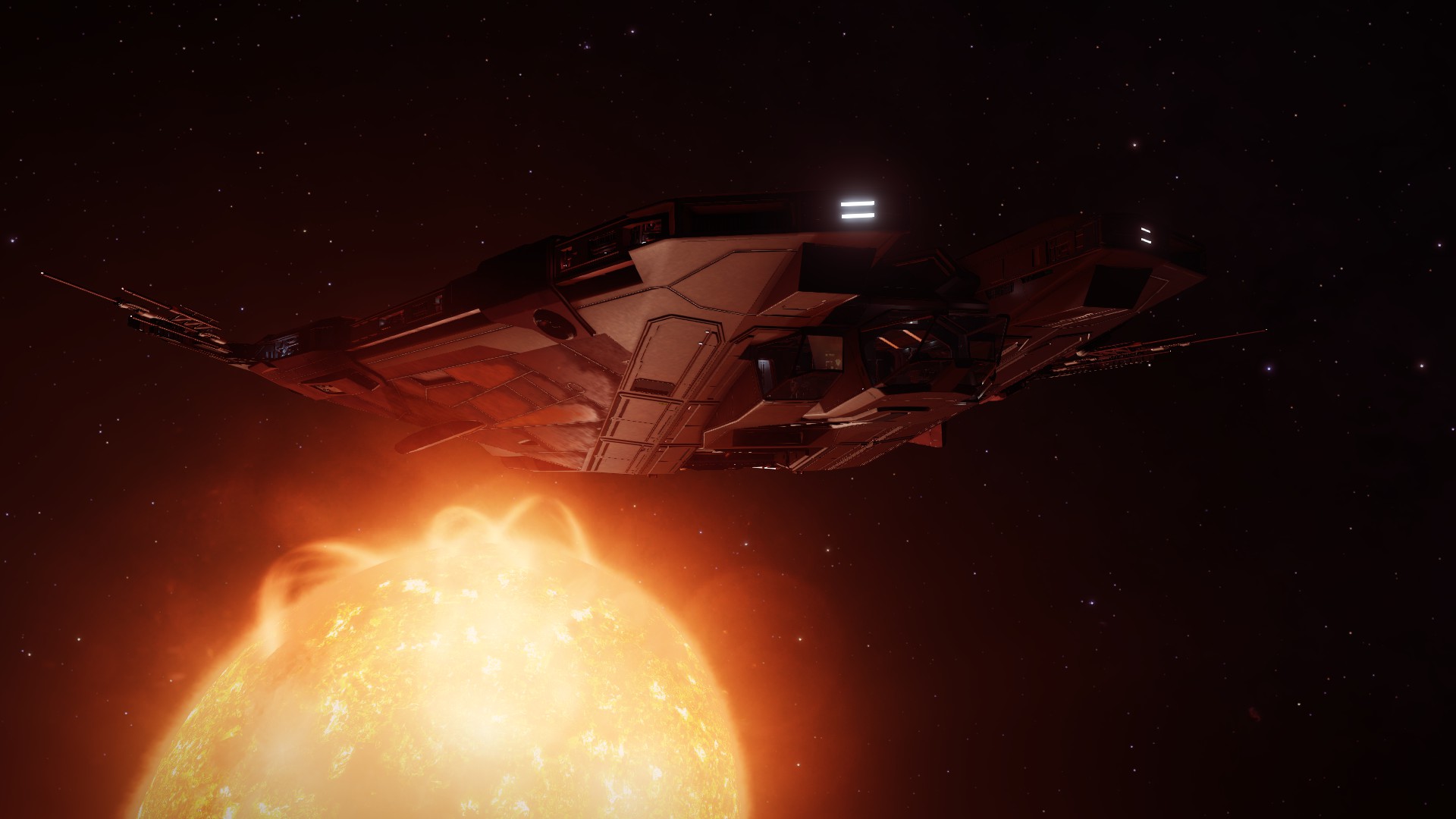 I absolutely ADORE this ship.
Fast, responsive, obedient and tough as Hell, the Paradox is as close to the perfect ship as any craft I've ever built.

After achieving the Federal Corvette, I used that whopping bruiser exclusively. HMCS Algonquin served her role well; honouring the name of my Grandfather's ship in WWII. She took it to the enemy, took on the hardest missions, took damage, and dealt it out ten times over. She was, and is, a superb vessel.
But the ONE ship of the Big Three I hadn't acquired was the Cutter, so I began schmoozing up to the Empire in order to get one.
By default, since most of the stations I was visiting were Outposts, I returned to my old Python, Hertz Doughnut. She's a good ship - tough and stable. But while returning to Jameson Memorial for an upgrade, I remembered that my old Thargoid-hunting Krait with its psychedelic Christmas paint was languishing in the garage. The Krait looks cool - unlike the Python which looks like a door-wedge - so I outfitted Xeno's Paradox with Hertz Doughnut's Engineered equipment and used her instead.

I fell in love. I mean absolutely enraptured. Xeno's Paradox flies like she has the thought-controlled guidance from the MiG-31 Firefox and the XF-34 Cheetah. (Yes, I'm a Dale Brown fan LOL)
She is crisp, clean in her movements, easy to fly and hugely versatile. Today, I'm mining with her. Yesterday, I was killing pirates. Tomorrow, we might sneak into enemy territory to steal information or eliminate a rival.
Xeno's Paradox is a partner as much as a ship. She fits perfectly into my hand, does exactly what I want. I try new things, teach her new skills. I built her as a multigun platform, now she loves her new railguns and frag cannons. The Paradox rises to the challenge every single time. If I ask too much from her, she'll gently remind me. I plan to use her for the rest of my career.
The first time I got to use my accumulated Arx to buy a skin, I got rid of the psychedelic blue and clothed her in menacing, evocative tactical red paint.
I got my Cutter and now I couldn't care less. It's just another ship to add to my collection. The Cutter looks great but she's no blood-red, stoop-shouldered, patient and deadly 330 ton friend - a sweetheart with a shotgun; lovely and dangerous.

Despite linking Krait mk II very much and picking it for most of my everyday activities I must nominate my Imperial Clipper. At the start of the year I went for a "short" exploration trip, planned it to be around the Bubble. Few turns later I ended in Colonia. It was such a nice ship that I casually took such a journey and barely felt it.

V
"
Dust had long since settled in this section of the hangars, and the busy sounds of the spacedock were silent here, the only sound here were the quiet hums of the air vents and humidity system that kept the atmosphere liveable.

Behind dusty crates of stored equipment, she stood planted on her landing gears. Her hull covered in faded blue paint and faint insignia telling the world of her commander’s credentials.

She was an Asp Explorer, her modules and equipment often whispered about in hushed tones at the local bars. Her paint might be old, but underneath the steel was the finest modifications credits and engineering could buy. Every inch of her modified for one purpose and one purpose alone, to travel far into the galaxy and see stars and planets that no one else had ever seen. Light on her feet, so she could dance among the stars.

These days it was a long time since her last launch. She was no longer the best model for exploration. Newer ship models had come, and exploration is at it heart a business. Pilots moved on to newer crafts, so they could go longer in shorter timespans.

On her side in faded white letters, you could read the name, “Scott”. A local barman could tell visitors that apparently it was the name of a long-since forgotten explorer. Like her, he fell short of the top explorer of his time. However, if you knew his story, you would know it was a name with testament to heart and grit.

For now cables and hoses kept systems running. Ticks and beeps from her navigation systems still audible for those that venture near her magnificent canopy, to this day the best view any pilot could have of the black.

Maybe one day the children of the spacedock will flock to the observation decks above the docking ports as she lifts off. A final run to the stars. She might not be the best in pure numbers, but as a symbol to crossing the unknown, she is now as recognizable as ancient sailing ships of humankind’s past."
Last edited: Dec 3, 2019

TheSisko said:
Just for fun, chat about what ship in your fleet brought you the most fun, pride and satisfaction for this year.

I think I'd have to give it to Excelsior. She carried me into the black for Distant Worlds II, and boldly took me to places I had never been before:

For eight months, she handled everything I threw at her, and then some. I gladly handled the 0.5B CR in exploration data and the sights I've seen.
Click to expand...

My ship of the year has been my Python, the ‘Candiria’. Trusty, reliable and tough. Mostly G5 rated with a Guardian FSD booster.

She briefly went into dry dock for the first half of this year. My commander having decided to work in the docking bays fatigued from exploration and combat duties, decided to assist cleaning and maintaining ships. For some reason he was unable to clean starships to a streak free standard, so angered by several complaints, returned to the Candiria and set off on mercenary missions, exploration and the gathering of Guardian Technologies.

The Candiria has had a new paint job applied, and shipkit fitted to improve the aesthetic.

M00ka said:
So everyone is just going to nominate their own personal ship ….. wow!
Click to expand...

Of course!!!
Naturally, I'd nominate "Fluffy Bunny Ears" (below) as the one I've had most fun in the last year... This will of course translate to a vote for the particular ship type 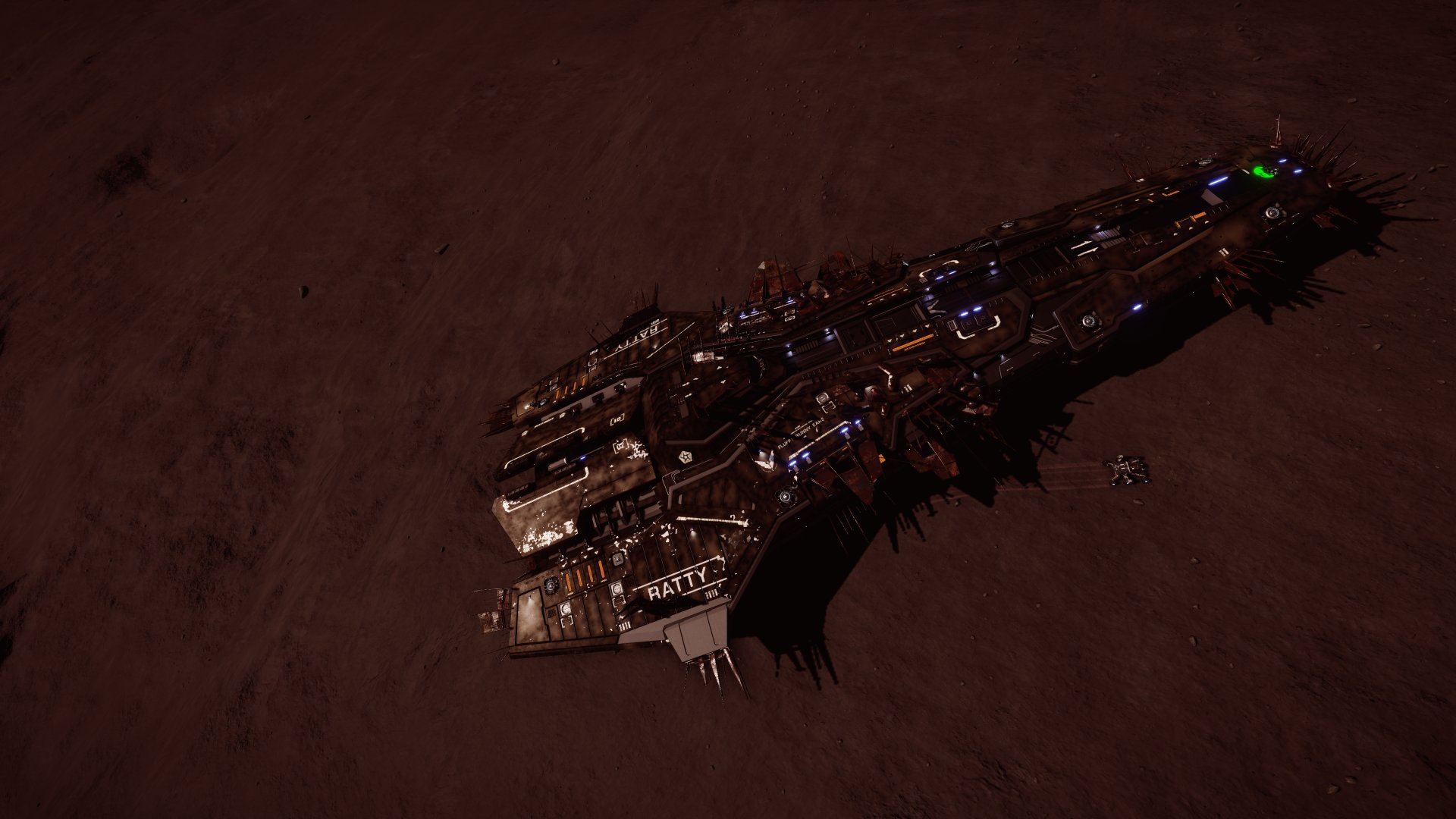 At least, that was how last year's went