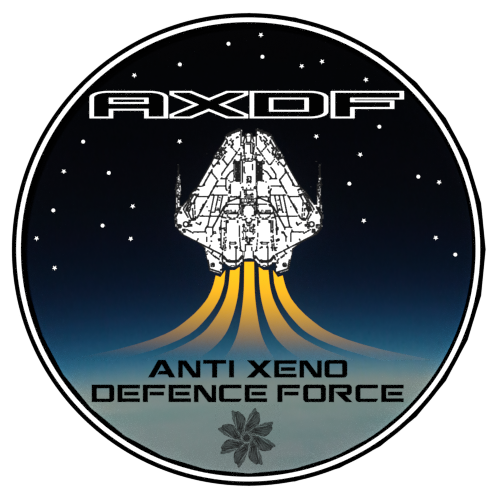 The Anti-Xeno Defence Force are the Fighting and Logistics crew of the [AXDF] Icarus, [AXDF] Pegasus and [AXDF] Hercules . We carry out Counter-Xeno Operations in the Pleiades and Witch Head Nebulas. We are seeking new enlistees across several roles to serve aboard the Icarus (Anti-Xeno Operational Command), Pegasus (Logistics support carrier) and Hercules (Security Forces Carrier) for an ongoing deployment to the Witch-Head Nebula. In addition to our AX Combat Detachment we will maintain a compliment of Logistics personnel to maintain carrier resources as well as a Security Detachment to handle human threats during operations.


Source: https://www.youtube.com/watch?v=OU76ten1ICI
​
The following roles are available to join within the AXDF

Security Detachment
Engaging in human/npc combat in defence of the carrier, defending Logistics and AX combat personnel from attack - Suitable for PVE/PVP CMDRs
.
.
.

You should use the following nickname format on our discord: CMDR yourCommanderName (e.g CMDR Joe Bloggs)
.
.
.

When ready to apply:
You should submit a join request on the Squadron Inara page (Anti-Xeno Defence Force - go to roster then join request) - https://inara.cz/squadron/7991/

You should apply for the in game squadron (ID AXDF)

Join our discord and move to the recruitment office channel - https://discord.gg/6kaaBGy

New Enlistees can report in to the [AXDF] Nostromo, which maintains a position within the bubble for inducting/orienting new personnel
Last edited: Jun 28, 2020

Updates on the AXDF ongoing Deployment in the Witch-Head Nebula

Another squadron update from the frontline

Another update from the Witch Head Deployment: