The "Buckyball" Braben Star-to-Shining-Star Memorial Trophy Dash, widely known simply as The Buckyball Run, was an unofficial, unsanctioned spaceship race run from Xiaoguan Hub in Magec to the Vonarburg Co-Operative in the Wyrd system, intended both as a celebration of the Federation Interstellar Star Route System and a protest against strict traffic laws coming into effect at the time.

As it was found out, the newly imposed 9.8c relativistic limit imposed by the Federation Maximum Velocity Law (imposed as an energy conservation measure) was actually slower than the quickest average velocities of point-to-point travels of Commander Ian Buchanan "Buckyball" Braben (no relation) in the first half of the 32nd century. In 3102, Braben flew the route in a Cowell-MgRath model 57 Sidewinder, averaging greater than 12.5c, setting a 32 minute record that stood for nearly 140 years.

Another motivation was the fun involved...

Did you steal that from one of ElectricZ's old event posts?

Don't think of it as plagurism, but more like completing your assignment the night before its due while copying large swathes of text from wikipedia with what you hope is good enough content for a 'passing grade'. It's not like I had the event planned differently before the Fleet Carrier update came out and I've had to suddenly change things!

There's really no way to do it without a whole lot of rules. Rules mean work.
So we're gonna keep it as simple as possible.
The race will be run in four classes:

Class 1 - Mothership with SLF^ class,
Where you can race one of the 10 fighter hanger compatible ships (^ if you're rich enough why not fit an SRV bay, then you can choose between SLF and SRV at each location).
Class 2 - Ship with SRV Challenge,
I doubt anyone sane person will do this. Maybe it'll be 60 mintues, maybe it'll be 120 minutes, its here if you're crazy enough to find out!
Class 3 - Elite Racer Unlimited,
Where you can race whatever you have, so long as it'll fit through the tight obstacle course at each engineer base. You just need to fit space for 5 passengers.

But, to truly gauge the piloting skills of the Commanders you need a level playing field. I give you...

Class 4 - The Regulation Budget Eagle,
Regulation Budget Eagle build link
To give pilots a chance to test their skills against other pilots instead of their bank accounts!
It works like this: at Xiaoguan Station in the Krinda system, you can purchase a stock Eagle with all the outfitting required at the same station. (Talk to Tara Stafford down at the Less for More Shipyard. She'll make you a good deal. Mention the Buckyball and get a free pair of fuzzy dice or pine tree air freshener, your choice.)
Fit your stock Eagle with a 3A FSD, 3E Economy Passenger Cabin, 2E Economy Passenger Cabin & 1A Fuel Scoop. The whole package will run you less than 700K.
Strip out the loaner pulse lasers, cargo rack, shields and assist supercruise and docking to increase jump range. After that you can't change, remove, or add any other component. That means, no enhanced thrusters upgrade, no downgrades to remove mass, or anything else. The purpose of this race is to put all your piloting skills to use: navigation, supercruise management, docking, the works. May the best pilot win.

If you've got an Eagle but don't want to follow these restrictions you can of course run it in the Unlimited class. It'd be cool to see exactly what a tricked out Eagle is capable of.


Race whatever you have from a Sidewinder up to an Anaconda, configured however you like. Strip it down to the bare bones to increase your jump range. Load up with Rares to make a few creds along the way. You might not make first place, but who cares. It's the journey, not the destination. Unless you come in first in which case everybody else is a sucker for thinking they had the mad skillz required to take on the Champion.

Why am I taking passengers?

You don't actually have to take passengers, just have the space to imagine you are.
Real passengers can be so needy.

How long does this take?

Well the race is something like 465-490 light years total. Factor in racing about each engineer base, you're looking at anything from 40-60 minutes in the 3 'main' classes, up to 90 minutes in the Regulation Budget Eagle Challenge.

One HOUR? Ain't nobody got time for that!

That's why it's called the SRV Challenge. You've read down this far. Don't wuss out now.

Anything else?
THE TL-DR VERSION
Engineer sightseeing tour for race enthusiasts,
Take a ship that can take at least 5 passengers, to the 5 beginner engineers bases, in any order.

CLASSES
Class 1 - Mothership with SLF class,
Compatible ships
You can fit an SRV bay as well, allowing the option to choose which to use at each base.
Once at each base, park your ship at a location for your passengers to watch you either,
_ Use the SLF to complete 3 laps around the provided circuit, OR
_ Use the SRV to complete 1 lap around the provided circuit (Special rules for SRV below).

Class 2 - Ship with SRV Challenge,
I doubt anyone sane person will do this.
Maybe it'll take 30 mintues, maybe it'll be 120 minutes, its here if you're crazy enough to find out!
Once at each base, park your ship at a location for your passengers to watch you
_ Use the SRV to complete 1 lap around the provided circuit (Special rules for SRV below).

NOTE
Ships and SLF must start the engineer base circuits from the start line.
SRV's can start at any point, once a full lap is complete can 'return' to ship.

It can get a little toasty trying to scoop fuel for the next jump. 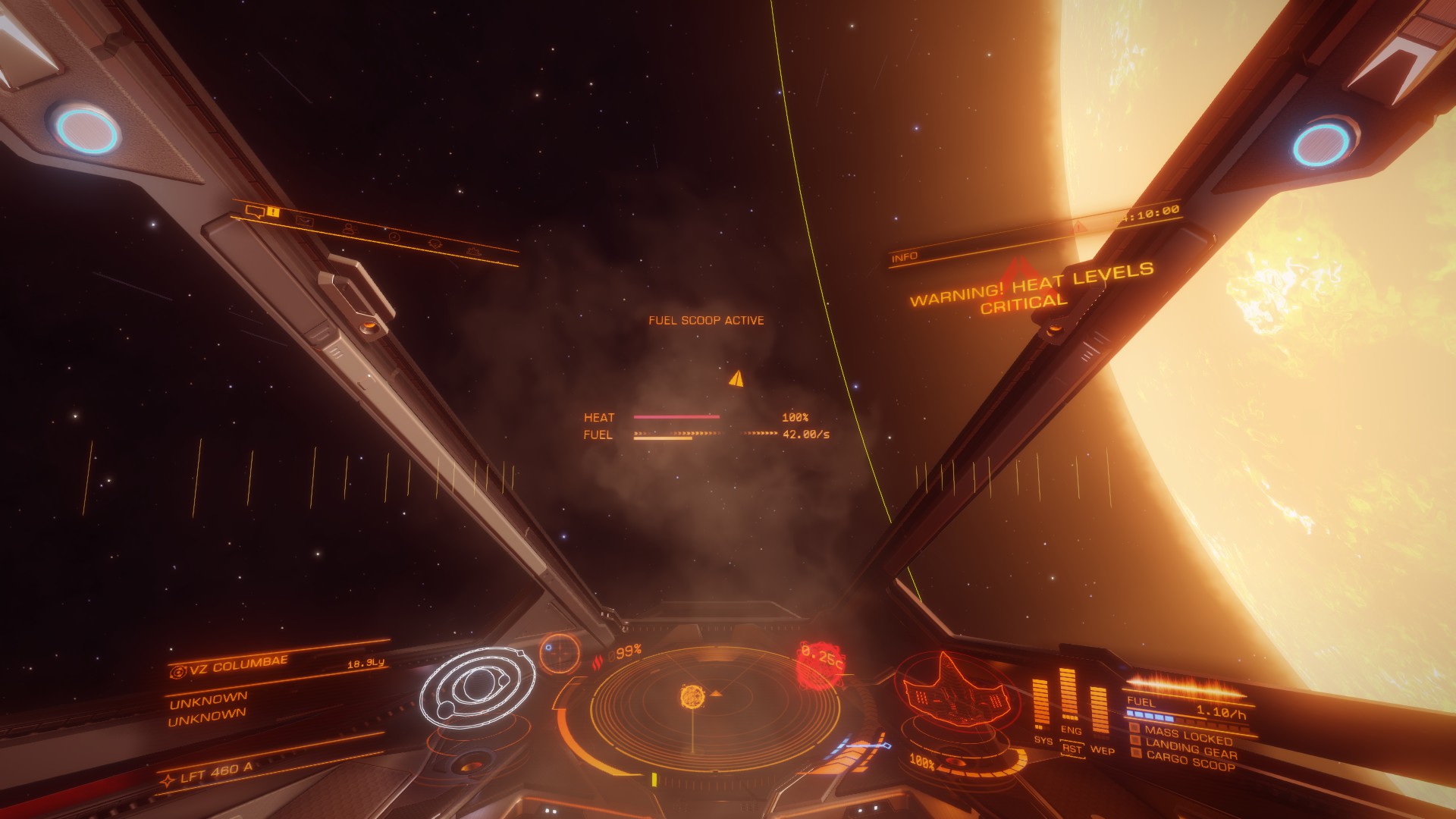 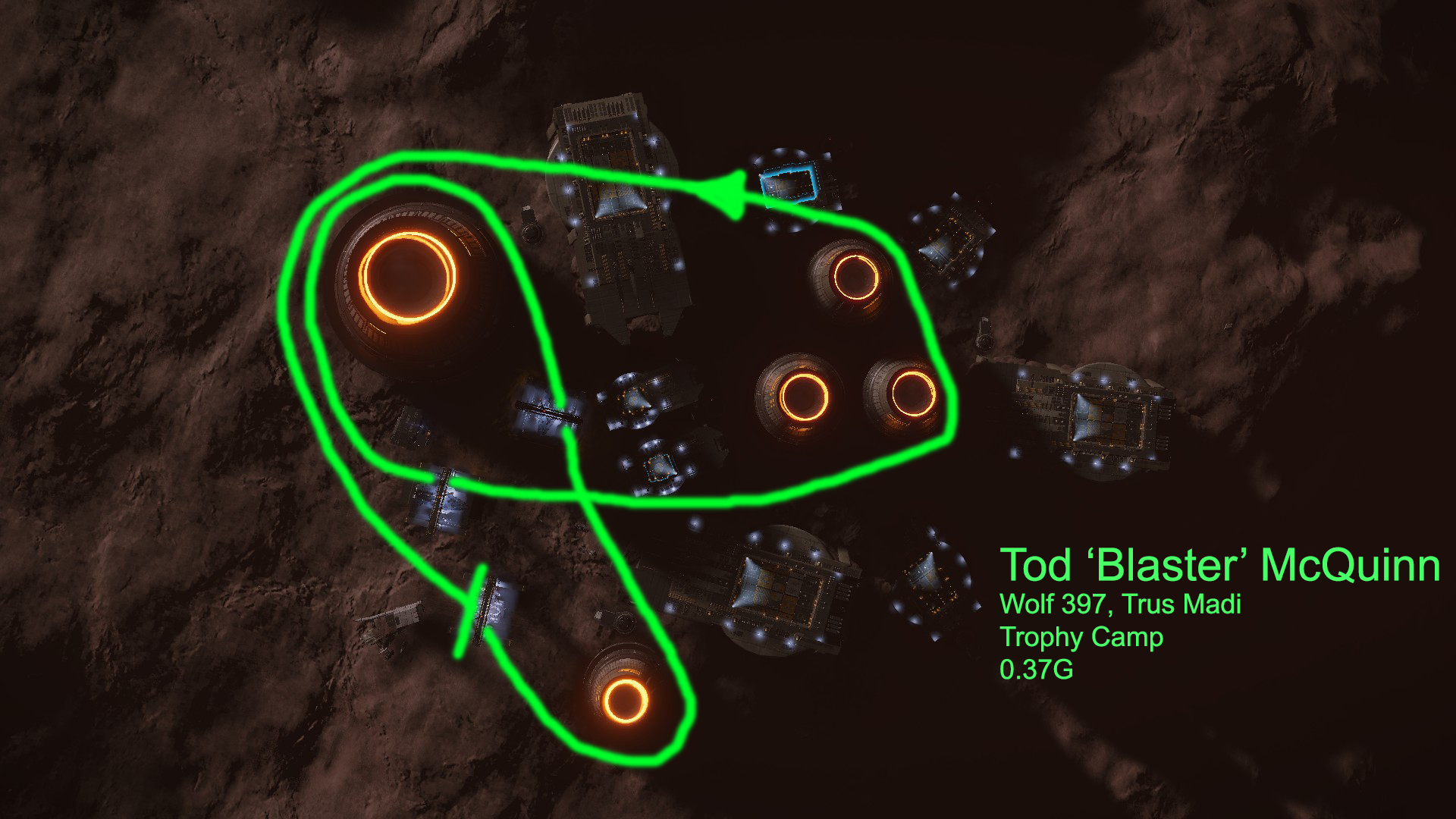 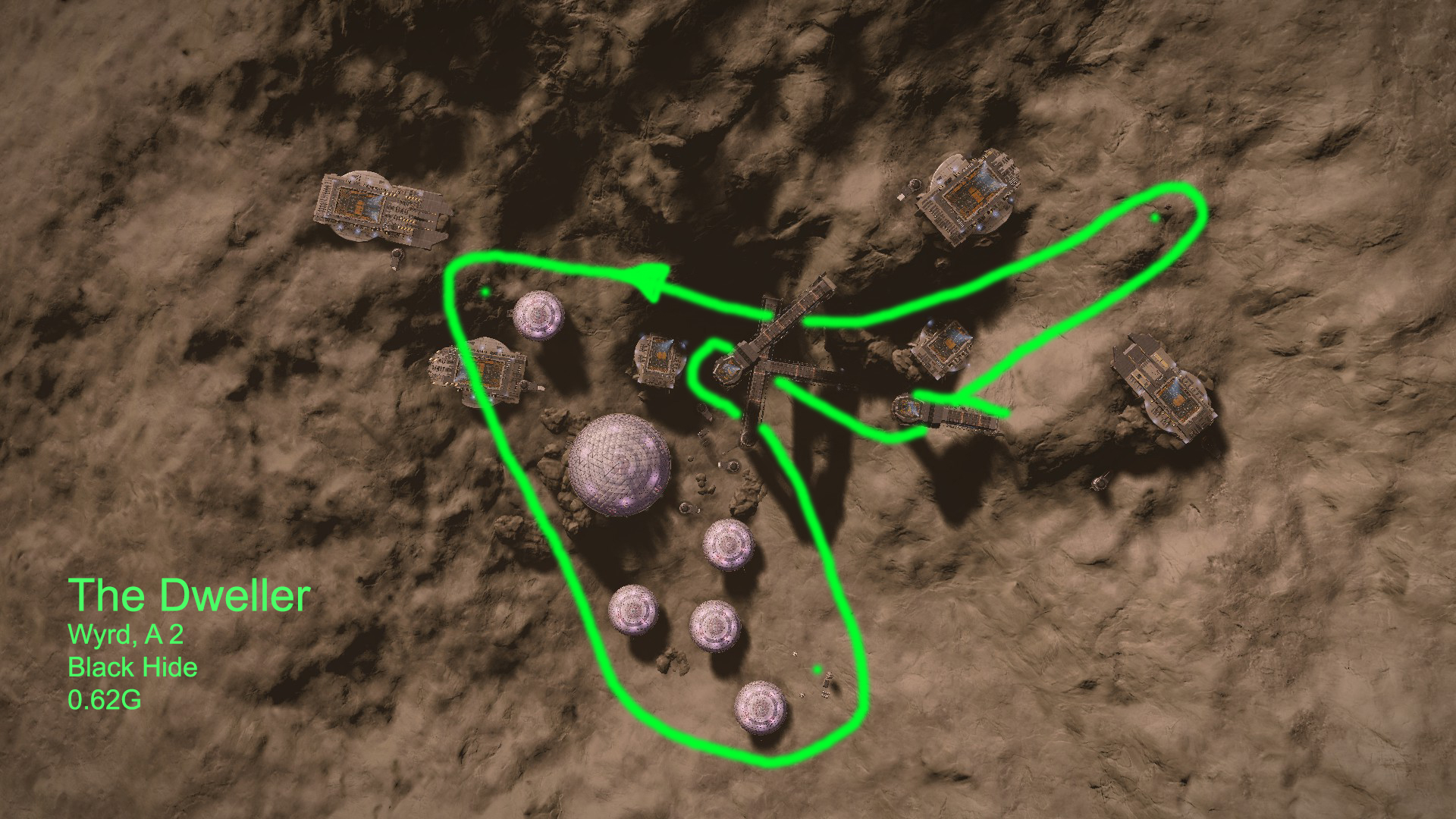 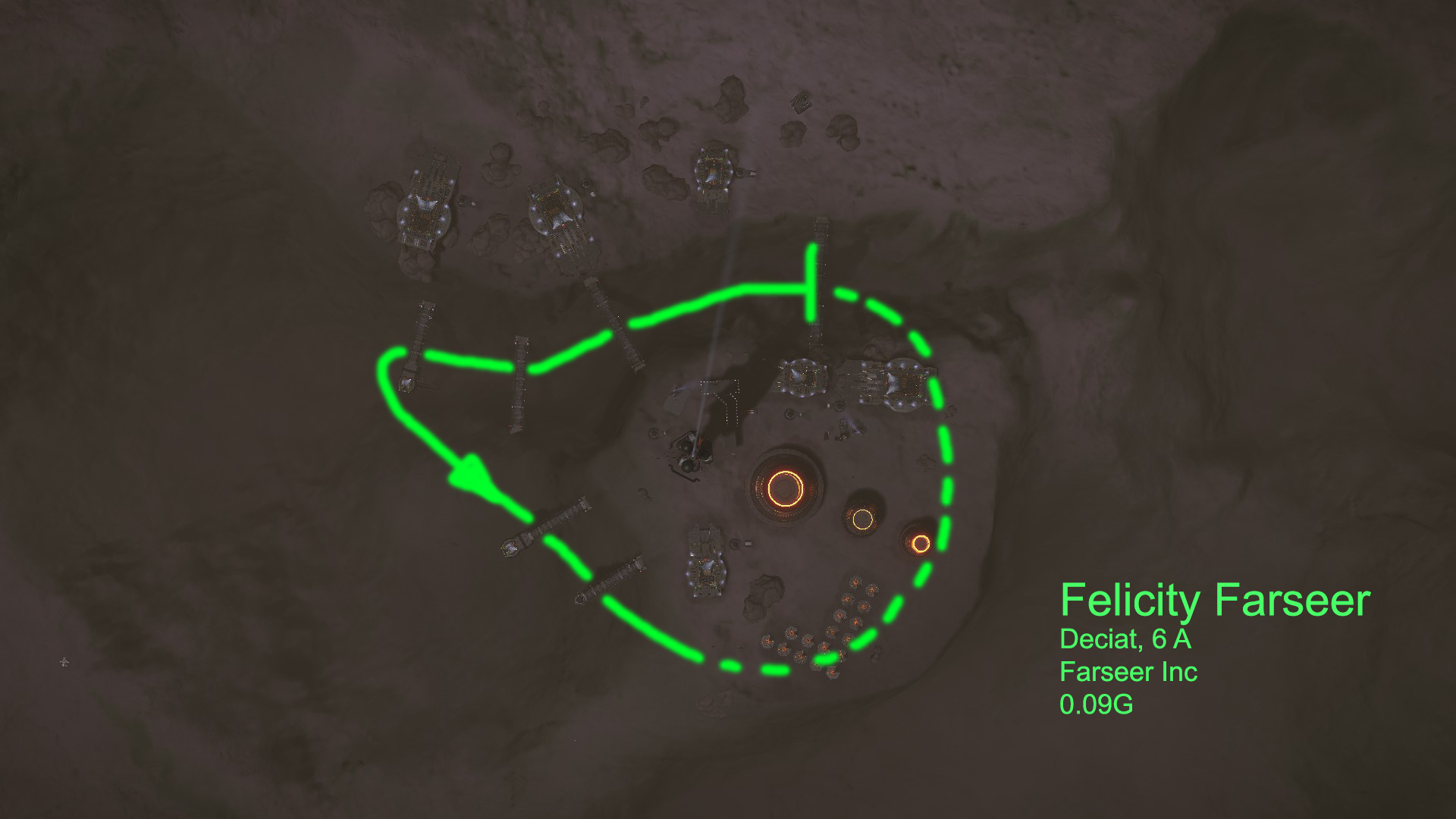 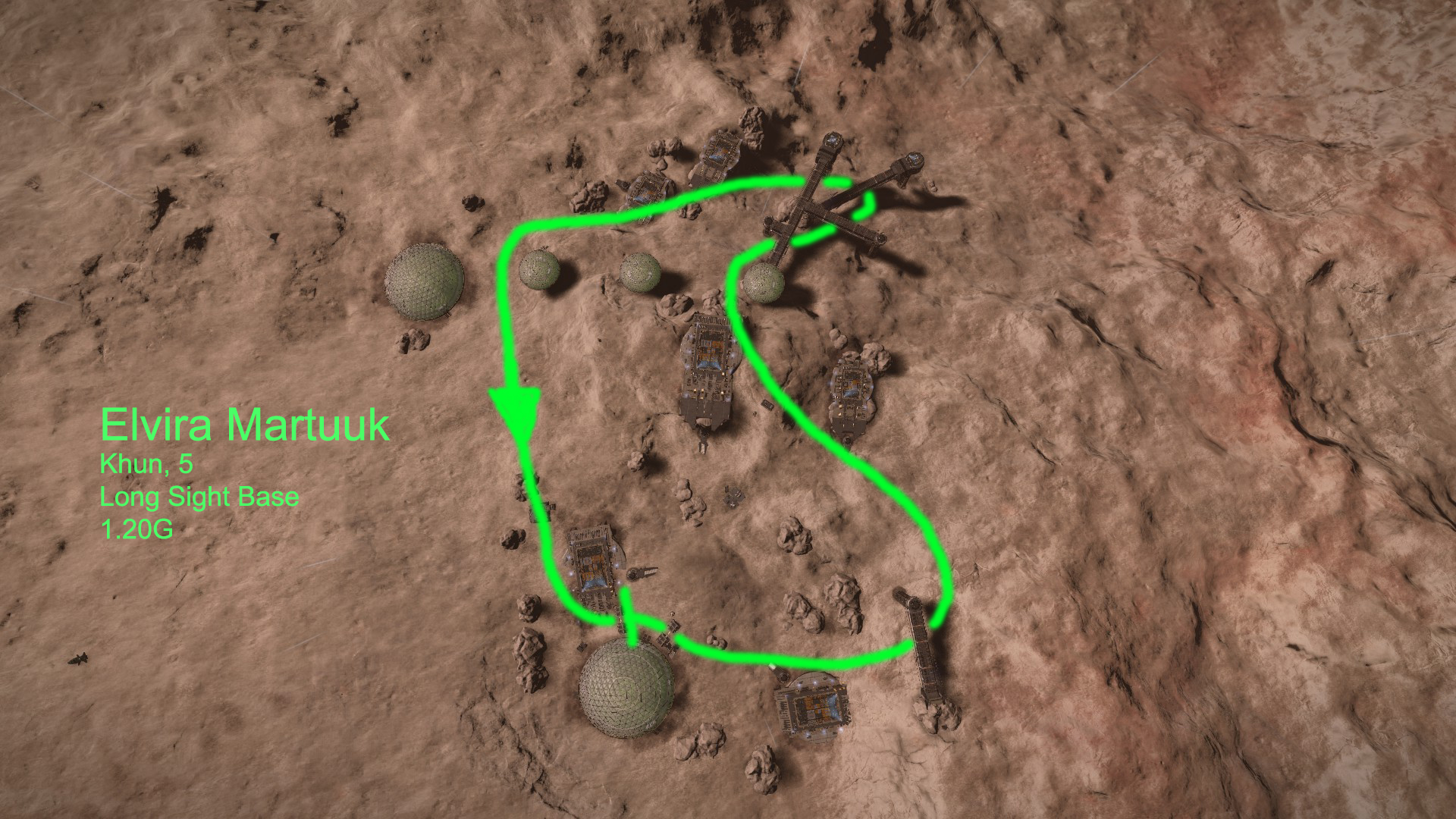 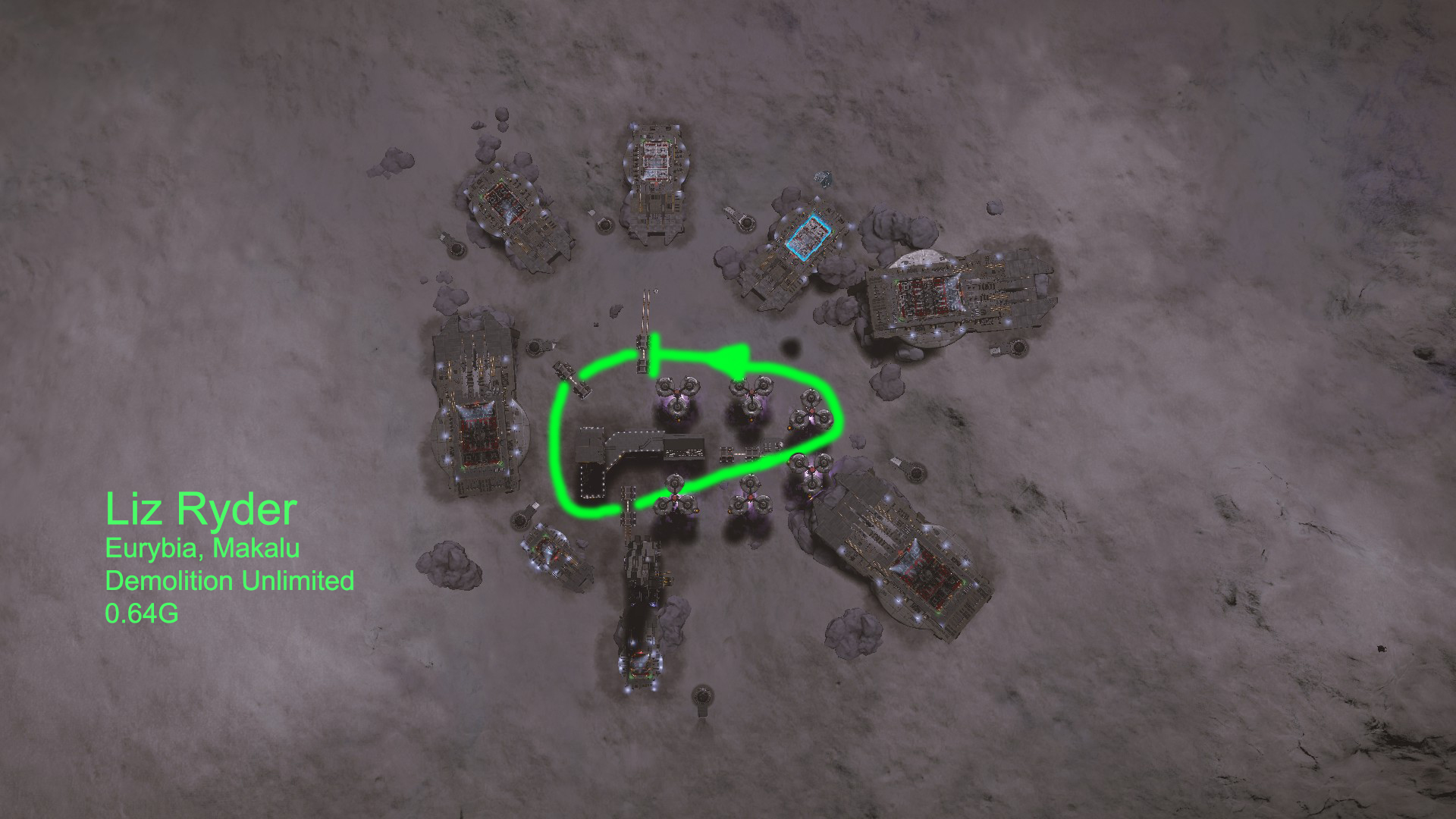 Screenshots (or video) will verify the racers' times.

^ can be done from outfitting or systems panel.
+ modules screenshot - if you're in the Regulation Budget Eagle.

So you should end up with around 16 screenshots. (Example)

You can submit your entry through either, 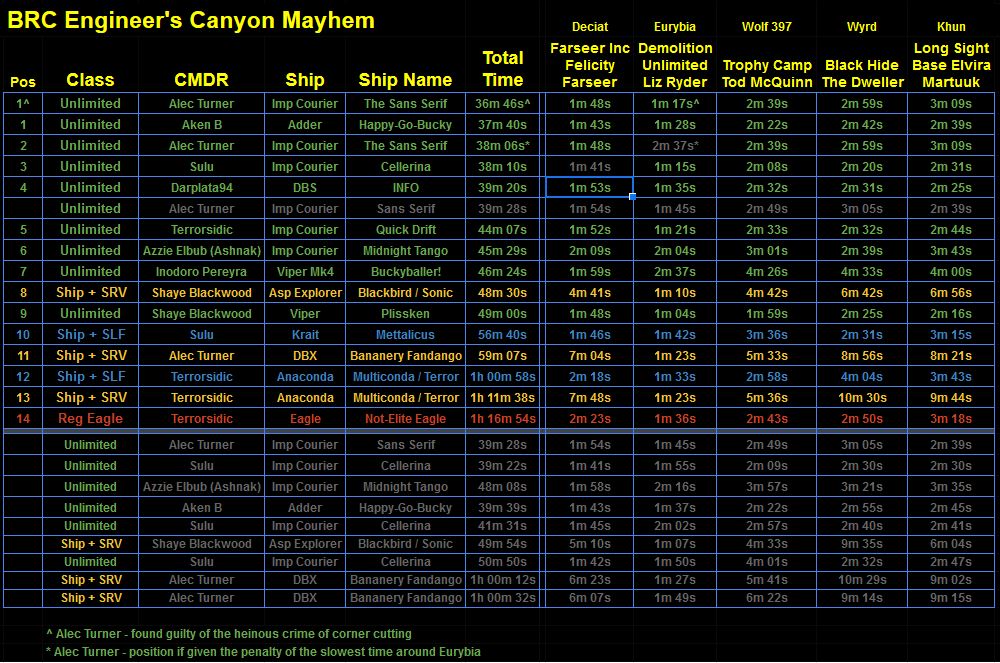 Declaring my intention to something something annoying engineers something.

I am loving Elvira's tash! Though there's not actually much change to her eyebrows

Stating my intention to keep an eye on this one.

Being in VR and with the new HUD, that's probably going to be 32 screenshots minimum

Declaring my intention to wear out my F10 key.

Oh I`m in thats for sure

Declaring my intention to show off a very manly moustache.

Intent to.... dye my stubble yellow... while racing... in some currently unknown crashing object.

Here's my intention of learning about a regulation build.

Ashnak said:
Being in VR and with the new HUD, that's probably going to be 32 screenshots minimum

Declaring my intention to wear out my F10 key.
Click to expand...

Why not just record/stream it?

Terrorsidic said:
Why not just record/stream it?
Click to expand...

Because of my uplink - I'm on cable, downlink is perfect, but the last time I uploaded a 15 minute video it took several hours. And your race sounds like it would go longer than 15 minutes .
Yes, I could record and then extract from there - but in that time, I could also do another run.

mrmike227 said:
Declaring my intent to hopefully not forget about this on the 20th

The race runs all week so you've got 7 days after the 20th to remember!

1. Where can I find the SRV and SLF circuits?
2. Are there any module restrictions?

1. Where can I find the SRV and SLF circuits?
2. Are there any module restrictions?
Click to expand...

We don't know yet!

But there's still a few days to go.

Ok I have ships for slf class and eagle class....guess I have the hardware..I will will move my carrier to start point this week.

Terrorsidic said:
Class 2 - Ship with SRV Challenge,
I doubt anyone will do this, given I expect it to take 90 minutes.
Click to expand...

You're killing me with the E class Thrusters and PD

And the Fuel Scoop...

Still gonna run the Eagle though

Terrorsidic said:
Class 2 - Ship with SRV Challenge, (I doubt anyone will do this.)
Maybe it'll take 30 mintues, maybe it'll be 120 minutes, its here if you're crazy enough to find out!
Once at each base, park your ship at a location for your passengers to watch you
_ Use the SRV to complete 1 lap around the provided circuit (Special rules for SRV below).
Click to expand...