Do you have what it takes to become a photojournalist?​
As a member of our highly skilled photojournalism team, not only do you need to be able to take excellent photographs, but you also need to be able to use your investigative skills to know where to get the perfect shot and be capable of getting to those locations quickly and efficiently. After all, today’s news is tomorrow’s history, and you’re not applying for the role of history correspondent!

To begin the test, dock your ship at the Print Works in the Millese system, appropriately outfitted for the task ahead but carrying no cargo. When you’re ready to go — and have completed all necessary research — return to the surface and take a screenshot which clearly shows the clock at the Station Services screen. Now, as fast as you can, head out to locations providing photo opportunities for one item from each of the following six groups, in whatever order seems best to you:


Once you’ve got the shots, return to The Print Works and take another screenshot of the clock immediately upon landing. This is your closing time.

All screenshots must be in-cockpit with the HUD clock visible. Note that it may be possible to satisfy several objectives at the same location. Creative thinking is encouraged.

When you have completed the task, submit your portfolio of screenshots to the adjudicator who will assess your performance and rank you alongside the other applicants.

Please note: this is not a real application to join the Sagittarius Eye team.
Sincere photojournalism enquiries should be made to photography@sagittarius-eye.com.

OK, so that's the scoop courtesy of Sagittarius Eye issue #24 but here are a few more details:

Your race submissions should be made using the following Google form:


HOT OFF THE PRESS - RACE SUBMISSION FORM​
Each submission should include 9 screenshots in total: one of your Inventory tab on the right-hand panel showing that you're carrying no cargo at the start, one showing the station services clock just before you launch from The Print Works (your start time), one for each of the groups you've selected above (each in-cockpit with the HUD clock visible) and one of the station services clock back at the Print Works after you've landed (your finish time).

Any ship may be used for your photography assignment and engineering is allowed. Buckyball Races would normally have two classes, Unlimited and Regulation, however in this instance, since it's highly unlikely that any two pilots will be following the same route, the need for a class where everyone is on an equal footing seems somewhat redundant.

"Flying through a Buckyball holo-ad" - this means a shot taken just before (so it's still possible to make out which advert it is) you fly through one of the holo-ad's shown below: 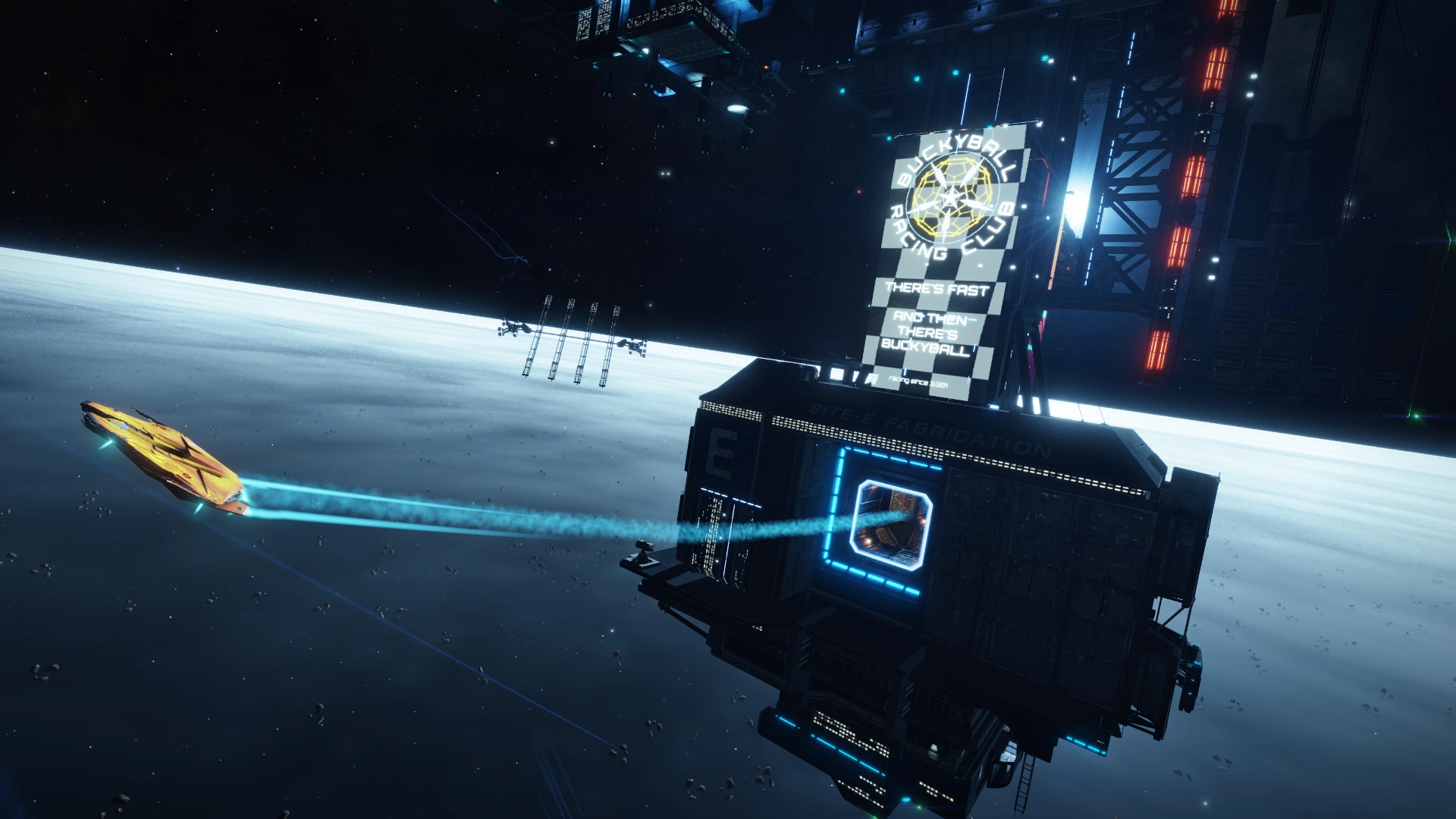 "Inside a burning station" - this is a shot taken anywhere inside a Thargoid attacked burning space station. You don't need to land, just fly in, take the shot and fly out again. Note: since there are currently no burning stations I've extended this category to include a photograph of a "restricted access" pad inside a repairing station.

"Something Thargoid" - anything solid will do, as long as it's obviously Thargoid in nature. Not the green mist around things like bases and attacked ships, not the green signs of caustic damage visible on assets the Thargoids have attacked and not Thargoid wakes. In other words, signs that Thargoids were here - not allowed, something actually Thargoid - allowed. Oh, and not the Thargoid bobblehead!

"A ship exploding" - that's an actual explosion happening, any ship (player or NPC) will do.

"Something Guardian" - again, anything physical and obviously Guardian in nature. Not human hybrid technology (i.e. you can't just take a shot of your own Guardian hybrid ship launched fighter) and not the Guardian cockpit lights either!

"A black hole" - the star's lensing effect must be clearly visible in the shot, it's not sufficient to simply target a dot in the distance which happens to be a black hole.

"A shipwreck (human)" - this must be a ship (i.e. not an SRV) but any clearly crashed, wrecked or derelict ship (planetside or in space) other than capital ships will do. It should be a permanent wreck (i.e. not the remains of your explosion from group #3 for example).

"An outpost ship showroom" - for those that haven't encountered these before they have an area with a glass roof through which you can clearly see an array of Eagles and other ships lined up. 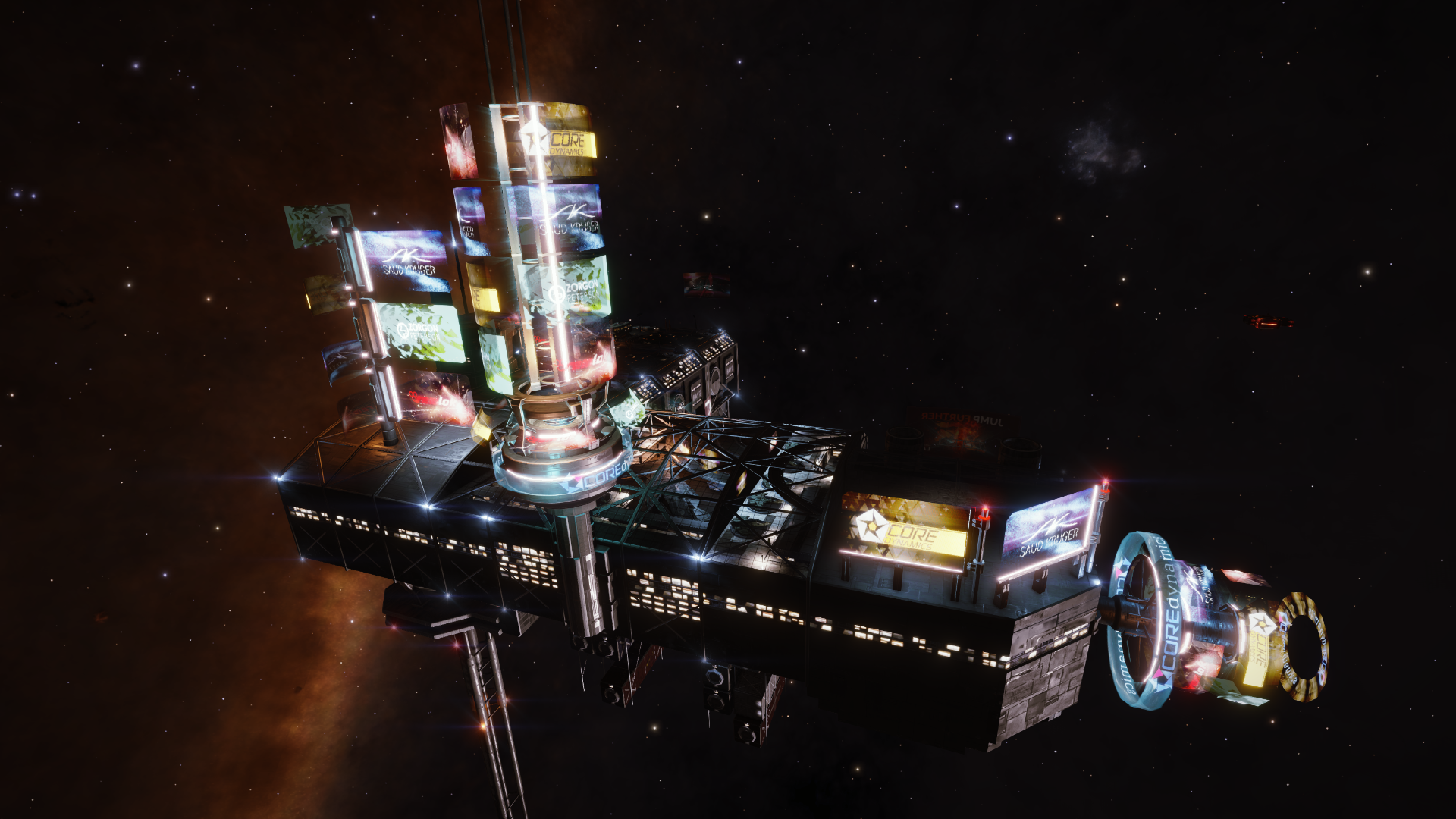 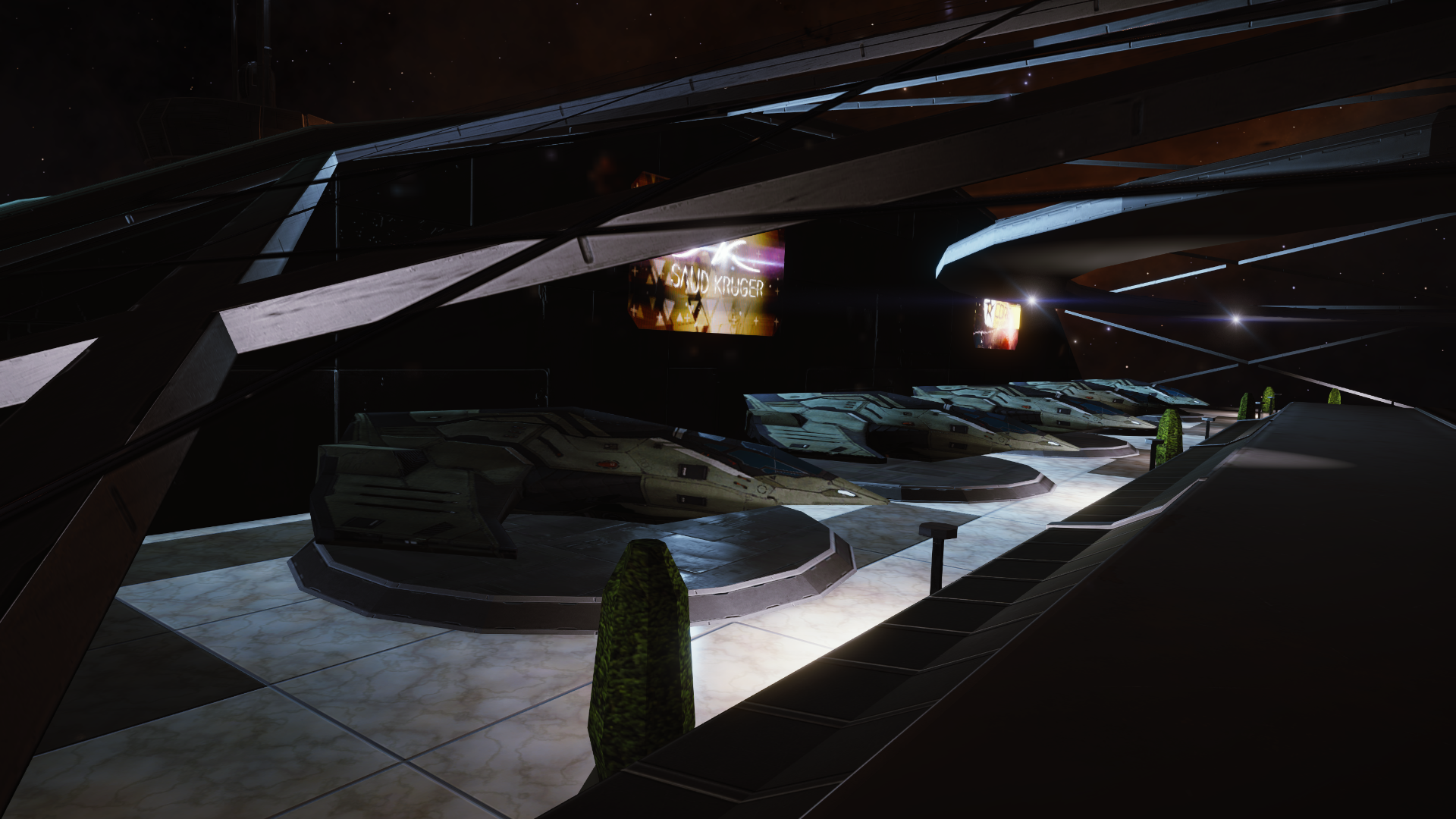 "An abandoned or wrecked SRV" - this should clearly be the body of an SRV and not just something like a single wheel.

As well as the main race I'm also planning to run a screenshot competition here in this forum thread. So, if you find yourself with a stunning photo opportunity and want to risk adding a few seconds to your run then go to external camera, compose a proper screenshot (this is a photo journalism event after all) and post it in the thread.

Q) Are you allowed to reconfigure your ship during the race?
A) Yes - you can even change ships mid-course if you think that will help.

Q) Will you accept video evidence?
A) Reluctantly, yes. If you're going to video your run (which is a great idea incidentally as it means you can pick the perfect moment for your screenshots at your leisure later) then I'd prefer you to then grab the appropriate set of screenshots from it but if you really really want to just upload the whole video and send the link to that instead then yeah, OK - I guess.

Q) Do you get any bonus if the black hole screenshot is of Sagittarius A*?
A) There won't be any tangible time bonus but, as with all Buckyball Races, going above and beyond the requiremements will always get you recognition and kudos in the Buckyball annals of fame. This includes things like doing the race in a wholly inappropriate type of ship.

Q) Do I need to race in any particular game mode?
A) The Buckyball Racing Club actively encourage people to fly in Open mode. This way there's the increased chance of bumping into (sometimes literally) other racers doing the same (which is always fun) plus you get the opportunity to tell other players you encounter along the way what you're doing (and maybe even encourage them to have a go too). The chance of being "griefed" during a race is minimal and we strongly believe it's worth the risk. But - if you're really averse to this then there's nothing in the rules (of this race at least) to say you can't run in private or solo.

Q) How close do we need to get to <insert-thing-here>?
A) Basically close enough for it to be clearly recognisable to the adjudicator as the item in question. See also the clarification above on black holes.

Q) Will pictures taken from the SRV also be acceptable?
A) Yes, pictures can be taken from either inside the ship or inside the SRV (HUD clock should be visible in either case).

Q) Is using a second account an acceptable loophole?
A) Not really, no. I feel this falls into the much derided area of "pay to win" so, although it might be difficult for me to prove you've done it - I would urge you not to.

If you have any further questions (I've almost certainly forgotten to mention something incredibly important) then do please ask in the thread. If you feel the question is going to giveaway your tactics to the other racers (or if you just want to check whether your cunning plan is going to break, or merely bend the rules then send me a pm).

And finally, to get you going, a few useful sources of information.

The Canonn Science Codex: All sorts of good stuff in here!

Ship docks, CQC structures and other new in-game assets: Again, lots of useful (if slightly out of date) information in here.

Alec's best of the forum and elsewhere: Obviously! 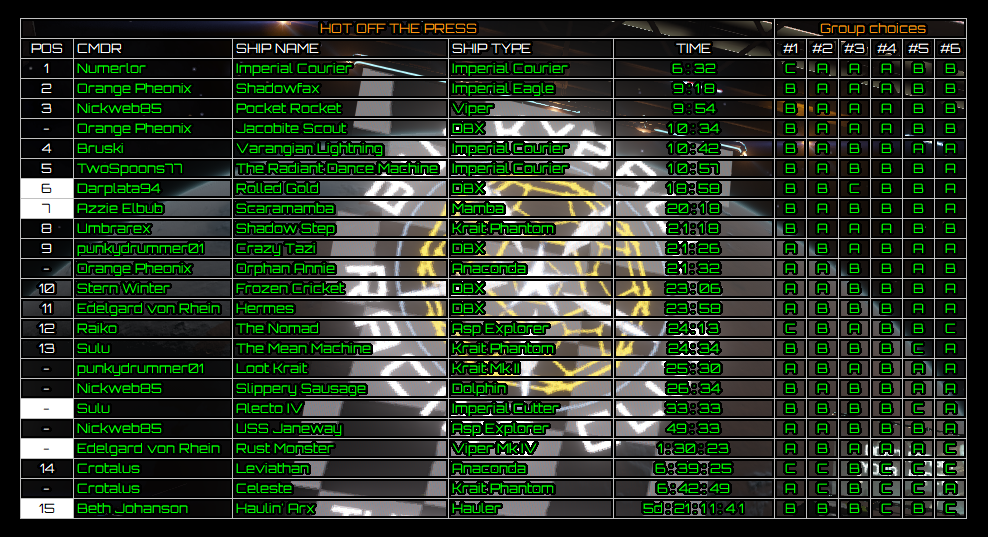 Ooooh mysterious!! It's going to be an awesome one everyone!!

I'm watching for it

E
Intent to race. Not sure what, yet. With a name like that, I'm expecting heat, high gravity and rebuys!

Intent to blow up race

With only a week to go until issue #24 of Sagittarius Eye is out I think it's time to unleash the race banner.

I've actually managed to play ED regularly for the last couple of weeks!
So intent to race...

Whatever that means for this one.

After a bit of an absence, I feel the need to refresh my flying skills – a race would make good practice.

Hope to see you guys there ...

Oh, and I'll likely be flying with a new HOTAS, so blowing up is far more likely than actually completing a run ;P

For those of you furiously revving your engines I'll just utter a short word of caution - this race is as much about flexing the muscles in your brain to plan a competitive route as it is about flexing the muscles in your HOTAS to fly that route quickly. All will be explained shortly. Re: the whole Saigittarius Eye thing ... I've given them the scoop on this (it fits - you'll see) so be sure to grab issue #24 next Thursday so you can get planning sooner rather than later. Sometime next Friday evening / Saturday morning I'll probably reproduce the information from the magazine in the OP and start adding FAQ's and the like to answer any obvious questions about the race.

If anyone can find a way to blow up in a race it's me.

If anyone can find a way to blow up in a race it's me.
Click to expand...

It could even be compulsory! (see image #5 of the banner)

Alec Turner said:
It could even be compulsory! (see image #5 of the banner)

I HAVE to blow up?

Alec Turner said:
I've given them the scoop on this
Click to expand...

Alec Turner said:
It could even be compulsory! (see image #5 of the banner)
Click to expand...

UmbraRex said:
I HAVE to blow up?
Click to expand...

Quickest way of getting back to base !! Expensive though

UmbraRex said:
I HAVE to blow up?
Click to expand...

Alec Turner said:
It could even be compulsory! (see image #5 of the banner)

UmbraRex said:
I HAVE to blow up?

Nope, you said it was compulsory! I got it right there *points

UmbraRex said:
Nope, you said it was compulsory! I got it right there *points
Click to expand...