The Lava Loop race showcases some of the hottest places in the Bubble - literally. All the stations are in orbit, some in very close orbit, of worlds with seas and oceans of magma, that are even visible on the dark side. The course follows a loop that can be run in either direction to mitigate the problem of obscured jumps, which are expected to be common due to the close orbits. The start and finish point is Conway City in LTT 4961, which is a Coriolis station, but all of the waypoints are outposts, so only small and medium ships are able to participate.
You can run the race as many times as you like and try to improve over the duration of the event. If you choose to submit a run for consideration, please do so with 48 hours of that attempt, if possible (see Submitting a Race Entry).

There are two separate race classes: Regulation Hauler and Unlimited. The Regulation Hauler may not be engineered but the build has a jump range of over 30 LY and costs under 500K Cr: is intended to both allow a level playing field and to encourage new players to race. In Unlimited, any small or medium ship with any fittings and engineering can take part, including the use of Guardian FSD boosters. The use of Synthesis for FSD boosting is not allowed in either category but getting a boost from the jet cones of white dwarfs and neutron stars is permissible in both.
Note that it is not necessary to have Elite: Dangerous: Horizons to participate. Owing to the distances that must be traveled, it is anticipated that the Regulation Hauler build will need at least half an hour to complete the course, though factors such as obscured jumps may affect this. Unlimited times are anticipated to be approximately 20 minutes but could vary significantly by ship, loadout and pilot experience, with the very top pilots possibly completing the course in under 15 minutes in racing-optimised ships. Participants may take part in any play mode they wish but Open play is encouraged in order to meet other racers on the course.

Regulation Hauler build:
https://s.orbis.zone/4xkq
The Hauler and all components of this build can be purchased at the start point, Conway City in LTT 4961. The jump range when fully fueled will show as 30.87 LY in the right hand panel.


Race Outline​
The race begins at the Coriolis station Conway City in LTT 4961. The Regulation Hauler can be purchased and outfitted here in its entirety, provided that the station is not experiencing an adverse state. The course then proceeds through the following locations in either forward (clockwise) or reverse (anti-clockwise) order:
The race ends on return to Conway City and the time difference between launch time and touchdown is the race time.

Conway City, LTT 4961, is the start and finish line. It is a Coriolis station with all the facilities needed to buy and outfit the Regulation Hauler, making it the only station on the circuit able to support a large class ship, so you can dock here and switch to a smaller ship for racing. Hale Orbital, LFT 78, is an outpost with facilities to repair, refuel and restock your ship, should they be required. Sucharitkul Settlement, GR 316, is an outpost that has an Interstellar Factor, in addition to repair, refuel and restock facilities. Armstrong Platform, Njunmin, is another outpost that is home to an Interstellar Factor. It has repair and refuel facilities but not restock, which is needed to resupply heat sinks etc. . Edison Survey, Parcae, is an outpost with an Interstellar Factor and repair and refuel facilities but it lacks restock capability. Levchenko Horizons, LP 617-37, is an outpost with an Interstellar Factor and the capability to refuel, repair and restock ships. Submitting a Race Entry​
The race begins at 00:00:00 on Saturday 16th Nov 3305 and ends at 23:59:59 on Sunday 24th Nov 3305 in-game time (GMT). To be valid, a run must start in between these times.
Please declare an intent to race in this thread, in order that other participants can look out for you on the course. It is not required if you prefer not to, however. Race entries are submitted by sending a PM to me on the Frontier Forums with the following information:
Note on Game Platform: Entries are welcome across all platforms. There will not be separate leaderboards for different platforms unless there are sufficient numbers (at least 5, in order to have a podium and more than one other player chasing a podium place) but the variability in the specifications of PC users is expected to be large enough that players on other platforms should not feel themselves to be competing at a significant disadvantage. For reference, I usually play with a 5-year-old laptop and any disadvantage from that is tiny compared to the difference in flying skills between myself and the racers who tend to be vying for the podium places.

Race Evidence: the following information must be provided by screenshots (taken with the F10 key in-game on PC, console versions have alternative bindings) or be visible on a video. Screenshots can no longer be hosted on the forum and must be uploaded elsewhere (e.g. Imgur or equivalent) and a link provided. Video entries should be uploaded to a suitable video-hosting service (e.g. YouTube or equivalent) and the link provided.
This requires a total of 7 screenshots, or 9 for the Regulation Hauler mode, if video is not used. For examples of suitable screenshots when submitting race evidence, see also the Buckyball Racing Club's website.
If submitting video evidence, it would be helpful to include times or bookmarks of the pad touchdowns. It is also acceptable to extract screenshots from video footage of your run.


Additional Notes​
It is permitted to use Guardian technology, such as the FSD booster.
FSD synthesis is not permitted in any mode.
Supercharging the FSD in the jet cones of white dwarfs and neutron stars is allowed.
Ships may repair, refuel and restock at any outpost with those facilities.
Ship-to-ship repair and refuel is permitted.
Use of Multicrew is permitted. Buckyball racing should be considered illegal activity as we don't care about speed limits, reckless flying or the fines involved.
Please submit race evidence within 48 hours of making the run if you intend to submit, or else contact me to let me know when you will be able to. Entries submitted more than 24 hours after the deadline for racing will not be considered. Please don't hang on too long, if possible: submit and let people know what you're doing and try to improve later.
It is helpful to visit each system first and bookmark the start/finish and waypoints.
Armstrong Platform orbits a planet with one of the most eccentric orbits in the Bubble: the eccentricity is 0.7948, similar to some short-period comets in real life (e.g. Comet Encke has an orbit with an eccentricity of 0.8471)
Thanks to CMDR Alex Turner for help refining the final race banner!
Have fun! Intent to either blow up consistently or own the bottom of the leaderboard.

Intent to fry fly fast and set off smoke alarms in the toast rack. Ship, and indeed class, yet to be ascertained.

I should hopefully be back in the bubble by the time this race starts, so stating my intention to smash into some landing pads. It'll be nice to have Ozric's first Buckyball race in the bubble in over a year, especially as the last race I did was Edelgard's Colonia Trophy Dash, a couple of months ago

Did a quick scout around the circuit this morning - nice locations! 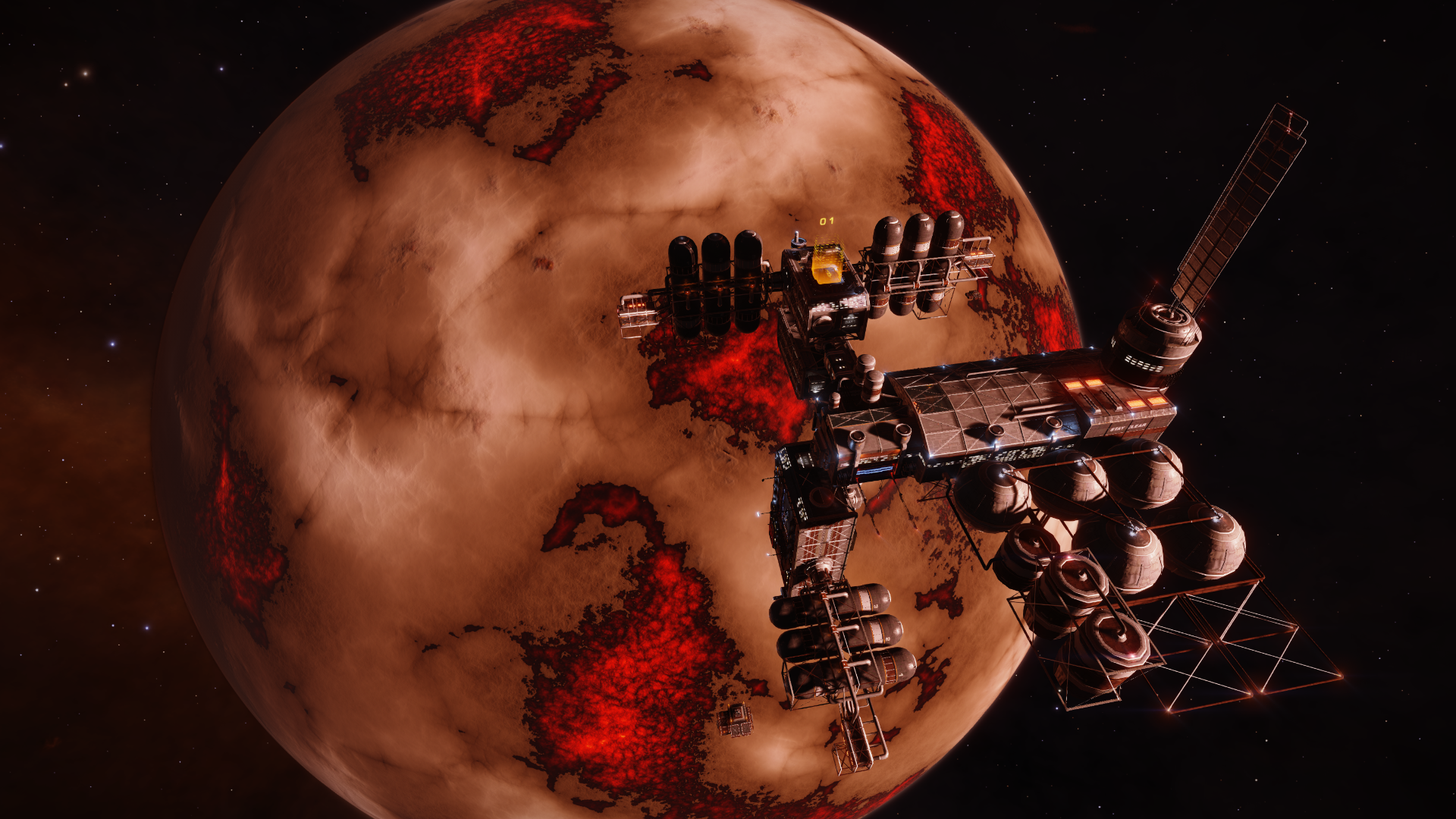 This is gonna be fun.

Count me in for this one. Probably gonna be the last local challenge I take before my long-range exploration voyage later in the month.

CMDR Captain-MD
Class: Likely Both but more so Regulation Hauler

Been speading the word on facebook (also a nice shoutout on Lave Radio and hopefully one from Guard Frequency too) so expect a few new racers to show up!

E
A word on module availability, since the Background Sim might change what is stocked at Conway City. There is good outfitting at Cousin Ring in Tjindjin, 5.68 LY from LTT 4961. I've received word that 3B Fuel Scoops are no longer available at Conway City but I understand that they are available here (heading to check, they are listed on Inara).
EDIT: confirmed in-game that Cousin Ring does indeed have 3B Fuel Scoops.
Last edited: Nov 16, 2019

Declaring intent to race and challenge Umbrarex for ownership of the bottom portion of the leader board.

Declaring intent to test out my new gaming chair and HOTAS mounts. Just as soon as I get them assembled.

Since Inga remains out in the middle of nowhere...

I'll be lucky to beat it - it went better than expected - might try an unlimited later if I can get something ready.

Declaring intention to race and to challenge Umbrarex and Folco Took for the bottom (that's a contest that's hotting up!)

E
As the first day of racing comes to a close, things are starting to heat up. There have been pilots racing in both categories and I have been to the course and seen one of those whose entry has now been submitted, whilst others are holding on and trying to improve before submitting. Now about those times... I think the display needs to cool down... only getting the first digit here. I'm sure that as the race progresses the e-rated cooling will gradually reveal everything. Side effect of life in close orbit to a planet with molten lava!

On to the submissions: in Regulation Hauler there has been an entry from CMDR Bob Dubrovnik in the Hypergolic. He was pleased with his run as it had no obscured jumps, interdictions or other untoward problems and he has submitted a time under half an hour. In Unlimited, the only submission so far has been from CMDR JCB Digger in his Diamondback Explorer Seven League Boot with a time under twenty minutes. Both these pilots used a Clockwise approach but it seems to have benefited them with the current planetary alignment favouring it. Well done to both CMDRs (and enjoy your time at the top - it's not easy to stay there!). Fly fast!

I've been too busy this weekend to play, but should have plenty of time over the next week.

Things I have learned:
1) My knowledge of the docking positions on stations (and outposts especially) is abysmal.
2) A modified Hauler takes a lot longer to stop than an unmodified one.
3) Using the pad / buildings as a brake does not work well on a ship that has the structural integrity of a wet paper bag - I think Alot is onto something with the Couriers shields there!
4) At least even an A-spec Hauler has a low rebuy!