Well Courier pushed round in just an hour as well so guess its me not the ships lol.

Fish172 said:
Well Courier pushed round in just an hour as well so guess its me not the ships lol.
Click to expand...

It could also be the course chosen! I have not done an optimization of unlimited myself. I might recommend steering clear of poopooz unless you are supremely confident in your SRV skills. (I am not in mine, it took me twelve minutes to escape).

Ozric said:
When I said that I was going to do a blind run...
Source: https://youtu.be/H05UdAtZK28
Click to expand...

This has been happening to me A LOT during my TR3 runs.

Alec Turner said:
This has been happening to me A LOT during my TR3 runs.
Click to expand...

If anyone else has the issues, you might as well add to this. https://issues.frontierstore.net/issue-detail/533

agreed..getting a lot of glitches in all modes

Oh, incidentally - amongst all the other fails I had today, this also happened ...

Since I haven't much time for gaming lately I won't be able to make many attempts, but I'm really looking forward to spend some time in the cockpit again!

Had to do a SRV rename mid run. It's now called Lucky.

New (DBX) run submitted. Despite obscured jumps, a recalled ship spontaneously dismissing itself again (I wasn't even close to it), running low on fuel (AGAIN!

) and having to switch to economical routing, and an interdiction attempt at the finish line - still significantly faster than the 'Vette. I should switch to regulation but I just want to get a perfect unlimited run first (I'll be saying that on Sunday).

Huh - so much for my suspicions about Shaye Blackwood's identity and how you never seem to see him and cookiehole together in the same race.

Ozric said:
If anyone else has the issues, you might as well add to this. https://issues.frontierstore.net/issue-detail/533
Click to expand...

Or better still vote on this report (of which that new report is really just an duplicate): https://issues.frontierstore.net/issue-detail/336

Well courier pulled in a better time but not challenge leaders in any way. Will submit as its less than the hour

I changed my mind and did an Unlimited run in my DBX (name: Offset Parameter) instead of a regulation run.

I successfully completed the course, and will submit it once the video is done processing.

I am not known for my speedy SRV driving, but I did my best. At least I did not blow up, although I did tumble end over end quite a few times

There were lots of glitches on the first planet -- floating rocks everywhere, and my SRV kept dipping down into the surface so that I could see the interior of the planet's mesh. That made it quite difficult to drive, I must say, but I managed it.

Here's a shot of my DBX on the pad, after the race: 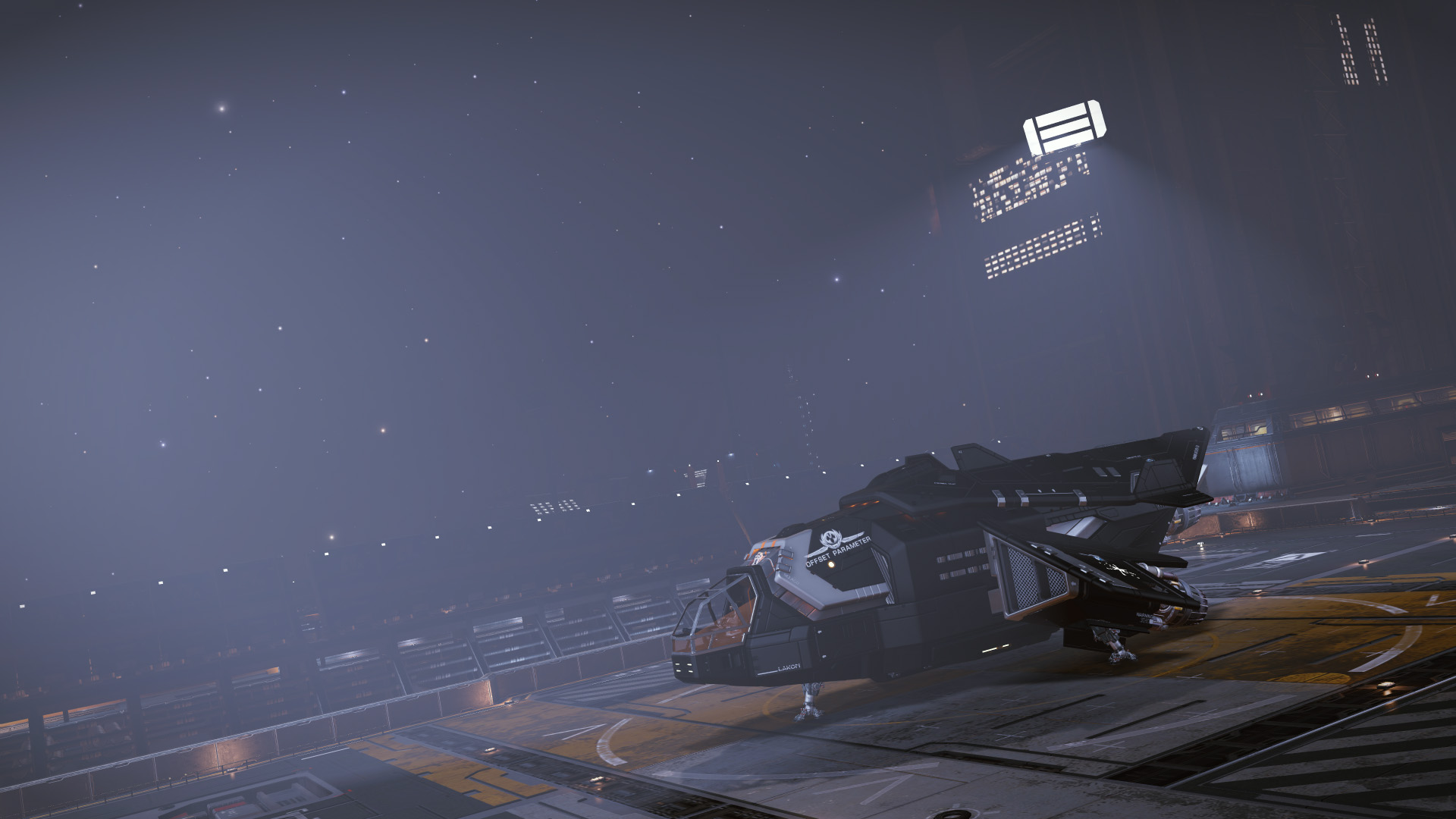 Hey you had both wings..this is more than I usually have!!!

Shaye Blackwood said:
Had to do a SRV rename mid run. It's now called Lucky.
Click to expand...

Someone needs to let me in on the joke here. As far as I can tell in game, there is no way to actually name your SRV. Is that correct, or have I missed it somehow?

After the dust has settled from the weekend, the size of the open leaderboards has quadrupled! Activity on the course has been high, with bumps and bounces a plenty. Races are still collecting their vidchips and other recordings to hand into the race officials. As dusk descend again on Pond Reach after another brisk 14 hour day, the scoreboard flickers with an update above the landing pads and race crews, repairing damage from minor collisions, and several trying to argue with the race officials about the legality of "non-standard" landing gear one their ships to obtain an apparently valuable "lifted" look. 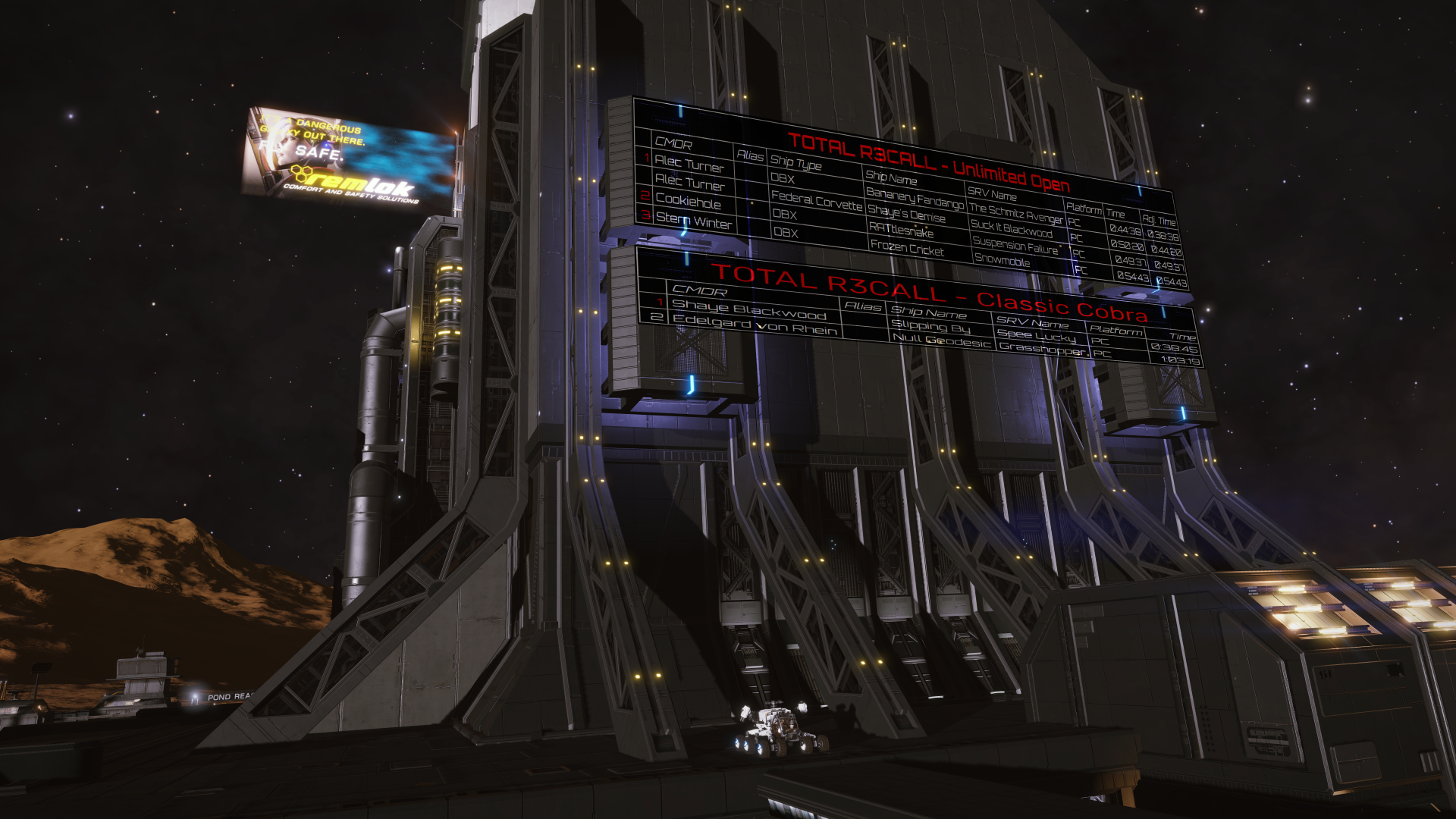 Returning to the racing scene with a blast, it's Cookiehole in his well-feared DBX RATtlesnake, coming in behind Alec's Corvette once bonuses were applied. It sounds like it was a rough run with multiple emergency drops and a replacement SRV, provided at a discount cost by Vac Lift, our esteemed race sponsor.

At this point Vac Lift would like to kindly remind the racers that sponsorship can be revoked at any time, and any complaints about the quality of suspensions can be directed to the nearest air-lock. Vac Lift only produces suspensions of the highest quality, and they are suitable for all maneuvers at all gravities. Any malfunction is solely the result of abuse by the end-user, and will not be publically acknowledged. Private complaints will receive remedial driving lessons as no cost from Vac Lift certified experts.
Click to expand...

...This just in, race officials have received three new submissions in the past hour, and will be returning with a newly updated scoreboard and more details shortly, tune in shortly for further race coverage!

Codger said:
Someone needs to let me in on the joke here. As far as I can tell in game, there is no way to actually name your SRV. Is that correct, or have I missed it somehow?
Click to expand...

Correct, you haven't missed anything. There is no way to assign a name to the SRVs in-game, we can still give it a name here though.

Shaye Blackwood said:
There is no way to assign a name to the SRVs in-game, we can still give it a name here though.
Click to expand...

Ok. I was taken aback by the inclusion of SRV names, thinking I must have missed the feature, lol. I've never even thought about naming one. I suppose I shall leave mine unnamed, I don't see why it needs one

Ok..lord knows I am not the world`s best SRV driver..in fact I am crap. My point is I finally found out that the SRV can go much faster than I ever thought possible.

Never a bad day when you find out something new eh? 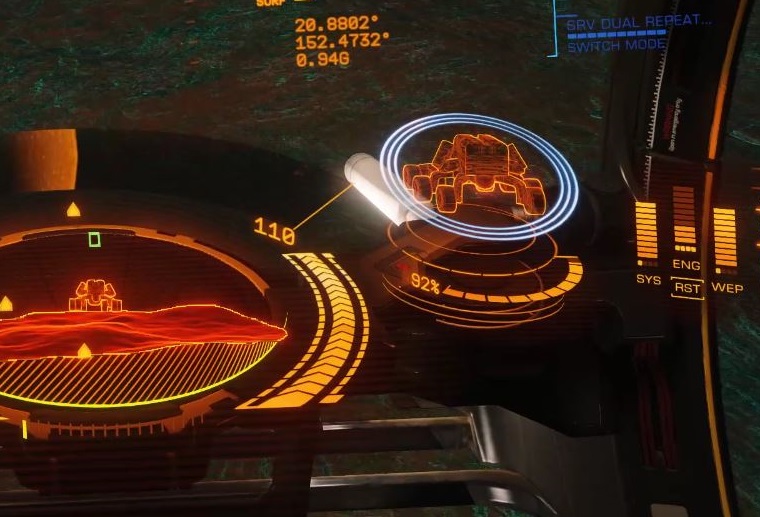