On the last day of racing, the monitors could scarcely keep up with the pace as contestants raced the Cobra Mk II in a "very interesting build." Apparently, the fuel scoop was not what some CMDRs are used to in this age of free-wheeling credits. But that's what regulation is for, isn't it? Remembering the days of yore when we were but poor Commanders, upgrading to bigger shinier ships before we could afford to A-rate them, using parts cobbled together from the nearest disreputable dealer or trash heap. What a long way we've come.


First up was Beth Johanson in the Servant of the Empire again. I'm not quite sure which planets Beth was racing on, but perhaps we should check again, as her contribution to Vac Lift's marketing was "Vac Lift Shock Absorbers - They make your ride so quiet that you can hear the little alien critters scurrying behind you." Uh, what alien critters? Can we get a xeno sweep of Ms. Johanson's ships? She might have some stuff left on her since her adventures in Hot Off the Press. Wherever she goes, trouble seems to follow.

Up next, Ozric took the Gorgoneion around the course, scoring the beautiful paint job with temperatures in excess of 180%. I guess scooping fuel wasn't an issue for those racers who could take the heat! He also stole a tip from Protomaniac and went backwards above 50m/s. These wily ways of the Buckyballers will never cease to amaze, as with this sizzling 180 combo, Ozric managed to slide past Alec into a neat 2nd on the board by a mere 10 seconds.

Not content to let Ozric rest, Alec Turner took reversing to its logical endpoint, and ran the entire Classic Circuit the other way round (which is entirely permissible), incurring an extra jump, and avoiding an obscuration, so it seemed to balance out, enough for a spot on the podium, but not enough to catch Ozric.
He seems to be getting a bit bitter at certain Race Sponsors nearing the end of this event: "Vac Lift suspension - we might not be great but hey, we're the only game in town so screw you!"

MrMike visited the course in smashing good style. Literally, impacting the ground before it's landing with an enormous crunch. Now lithobraking is a staple of Total Recall races, but MrMike might have a bit to learn about targeting. The giant shocks under the landing pads can significantly reduce the damage to your ship and the environment when hit in the right way. And they're even provided by our excellent sponsor, Vac Lift!
As Ozric so expertly demonstrates, the trick is to hit the pad, not the ground: An excellent entry, and in under an hour too, thanks for showing up MrMike! We're so happy to... oh wait, no-one saw him? He ran in private mode the entire time? Oh well, hopefully next time he's feeling a bit more friendly, we'll be happy to stick a provisional run up on the scoreboard and send him some swag. Welcome to the club!

Speaking of running in stealth, out of nowhere, with no intent or warning, Darplata94 showed up and ran the course in the "Flaming Frontier.' And ran it again. And again. All in all, the Flaming frontier started 7 runs and completed 3, in shorter and shorter times, shaving SRV times down below 3 minutes, and sometimes under 2.
Catching up to him, looking a bit warm and tired, we got this clip:
"I had 2 obscured jumps this run and I didn't hit any planets. I also wasn't bothered by any race fans on any run. With around 3.5 hours left, I went to Schmitz Reach, took a look around and decided not to try an unlimited run even though I had transferred 3 ships out at the beginning of the week. My sincere condolences to Alec for taking 2nd from him and to Ozric for booting him off the board. Congratulations to Shaye for winning Regulation. I am still not certain how you're so fast in supercruise. Thanks Bruski for running this race and for the Buckyball memorabilia."
Sporting and gracious as always, that CMDR Darplata94

A good regulation race to all, and to all a good night! 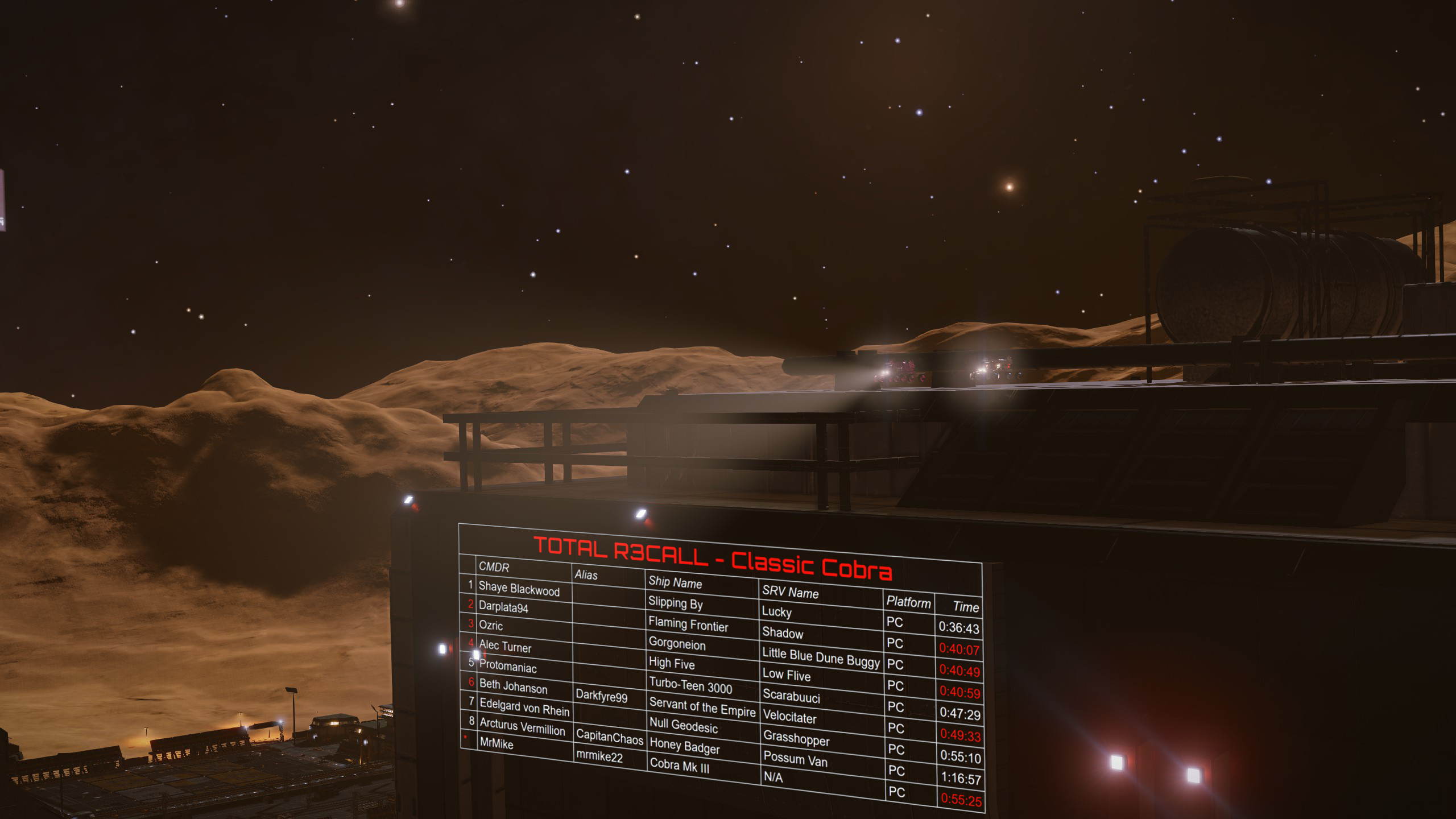 I had two more Vac Lift endorsements saved up, in the overly optimistic belief that I would be using them.

"Vac Lift Suspenders - Our ferro-ceramic coating can resist corrosion in wide range of conditions, from ordinary salt water, to the surface of Venus, and being splashed by concentrated molecular acid."

"Vac Lift Corporation would like to express our sincerest condolences to the survivors of the Nespoli Shocks & Struts Factory Incident. Unlike our competitors, Vac Lift, Core Dynamics, Vodel, and all Core Dynamics subsidiaries puts the safety of our workers first. Put your safety first. Avoid cheap knockoffs, and buy genuine Vac Lift parts."

Bruski said:
Protomaniac Intent to set a low bar Failure? Mid-table regulation? That doesn't sound like a low bar to me.
Click to expand...

I've never felt so good about failing. Thanks for letting me join the race! It was a lovely experience. Congrats to all the winners! Until next time CMDRs o7

Not to be dissuaded on the last weekend CMDR Sulu made one last attempt, in a DBX called the Crimson Haybaler (seems familiar) but with a newly named SRV, the Hollygolightly. Perhaps this more positive name propelled him to greater speeds, as he passed Stern Winter. Aside from a refueling mishap (this isn't regulation, what are you doing to yourself!?), everything went smoothly, and Vac Lift appreciated his positive attitude adjustment and already has an ad going to press: 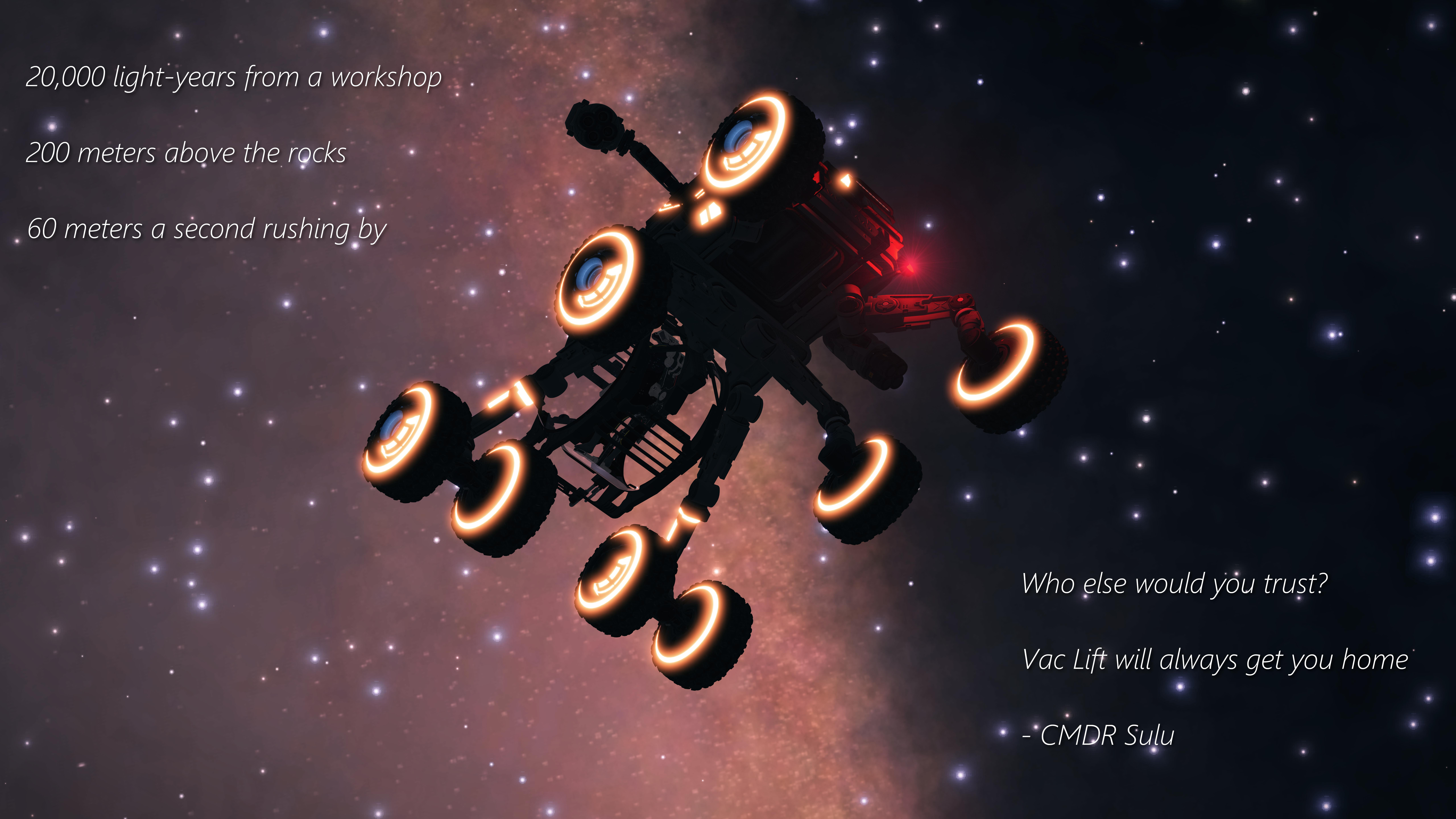 Next up we saw MIKEY99, who I think is a new buckyballer, out on the course. Kindof a rough introduction though, as at Gray Base (one of the less popular choices), he totally lost control, tumbled down the hill, head over heels, again and again, until his SRV exploded in a pile of parts and pre-planned demolition charges. However, the Vac Lift suspension was found by race officials afterward and determined to be in fine working order. All error was on the part of the pilot, and it seems the windshield cracked wide open at the end, resulting in a spontaneous explosion. Even with this 3-minute loss, MIKEY99 managed to complete the course, earning himself an excellent commendation for perseverance.

The last few hours of racing in Unlimited proved the most exciting though, with the entire podium shifted and shook, first by CMDR Sgurr, only the second to take an iCourier, the Vision Thing, around the course. A relative newcomer to Buckyballing, he seems to have taken to it quite well, once he finally finished a race!
We spied a copy of his notes through a zoom lens aimed at his windshield; when deciphered it read:
Lithobraking = good
Faceplanting wrong planet = BAD
It seems like all you'd need to know about planetary approaches right there! Sgurr took the Magec Minute, and in doing so reduced his already low time of 44:38 down to the repetitive 38:38 which... oh my, how did THIS happen? We have a TIE for first place! After three-quarters of an hour hyperjumping, supercruising, gliding, lithobraking, bouncing, fliving, recalling, and racing, CMDRs Alec Turner and Sgurr have managed to hit the exact same second, and have a dead heat at the top of the...
gets handed a piece of paper
wait...
rustles with a stack of submissions
there's one final entry undergoing analysis...

Apparently CMDR Shaye has entered the Unlimited class, in an Asp Explorer called the Blackbird, and the SRV Sonic! He's not a regulation only act folks, it's both leaderboards that must be conquered. And it's with his usual dash and aplomb that he sped his way around the course, stopping in Schmitz, Tilley, and Anderson, with an average SRV time of 3:03, taking both bonuses and 1st place with an adjusted time of0:32:56, more than 5 minutes ahead of the tie. Will anyone stop this racing madman?

Some say, Vac Lift is trying to recruit him for their racing team...

Some say, underneath that helmet lies a thargiod face...

Congratulations to all on a hard-fought podium and race, a difficult to optimize and calculate course, and brutal bonuses over bouncy terrain. 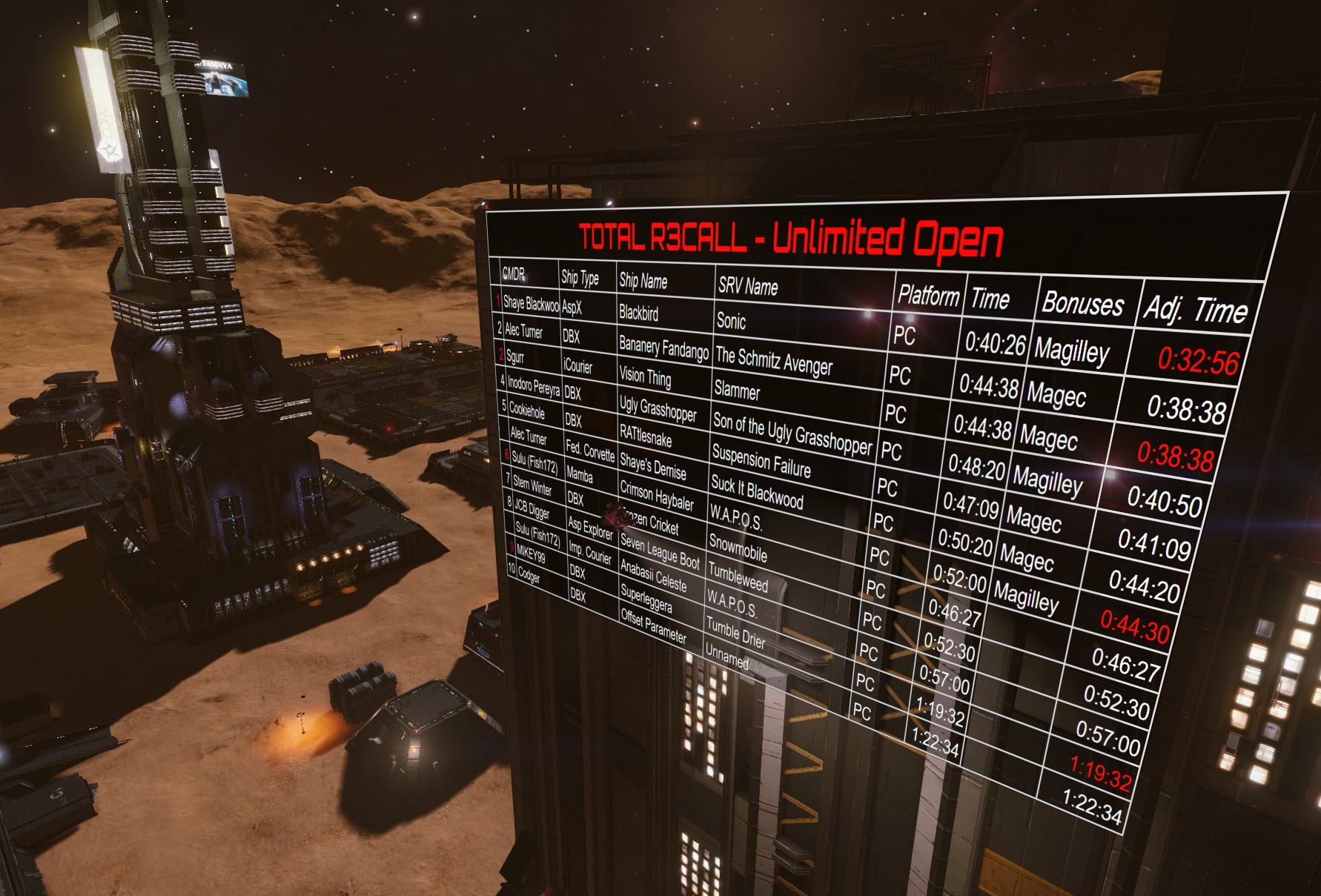 P.S. Showboating in front of expensive holo-projected scoreboards is not encouraged and will not be tolerated, no thanks to CMDR Alec for his assistance in getting this scoreboard shot.

P.S. Showboating in front of expensive holo-projected scoreboards is not encouraged and will not be tolerated, no thanks to CMDR Alec for his assistance in getting this scoreboard shot.
Click to expand...

LOL - I can quite literally see myself falling further and further down the leaderboard.

Thanks again to Bruski for an awesome race and especially for doing a scoreboard post on christmas day - that's above and beyond the call of duty I'd say.

See you all for more Buckyball racing in 3306.

Alec Turner said:
LOL - I can quite literally see myself falling further and further down the leaderboard.

Thanks again to Bruski for an awesome race and especially for doing a scoreboard post on christmas day - that's above and beyond the call of duty I'd say.

See you all for more Buckyball racing in 3306.
Click to expand...

Only because I'm woefully late though!

See y'all next year.

Thanks again for the fun race!

Quick heads up for anyone subscribed to this thread who's unaware - our next race (being run in collaboration with the Hull Seals!) starts on Saturday.

Also wanted to mention that the results of Total Recall 3 have now been added to the Past Events section of our website.

S
I am really psyched by this, thank you so much Bruski : 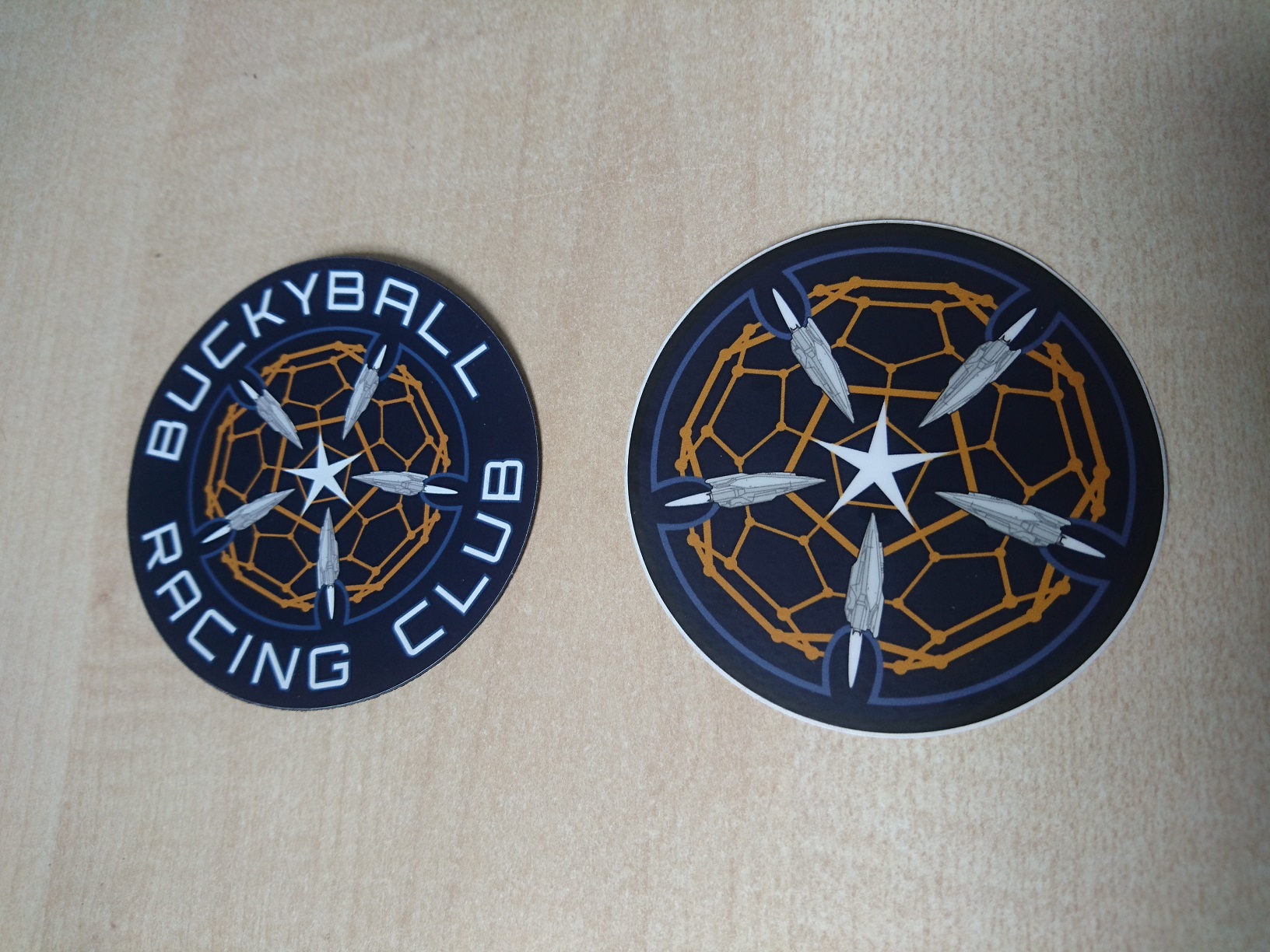 (Loved the letter too )