Remind me never to make fun of whales again

Good fun with Malibu at the North Pole last night.

First we did some basic surveying of the area to really nail down the position of the Fire ("Sulphur Peak") And Ice ("Manaslu Peak") Mountains. 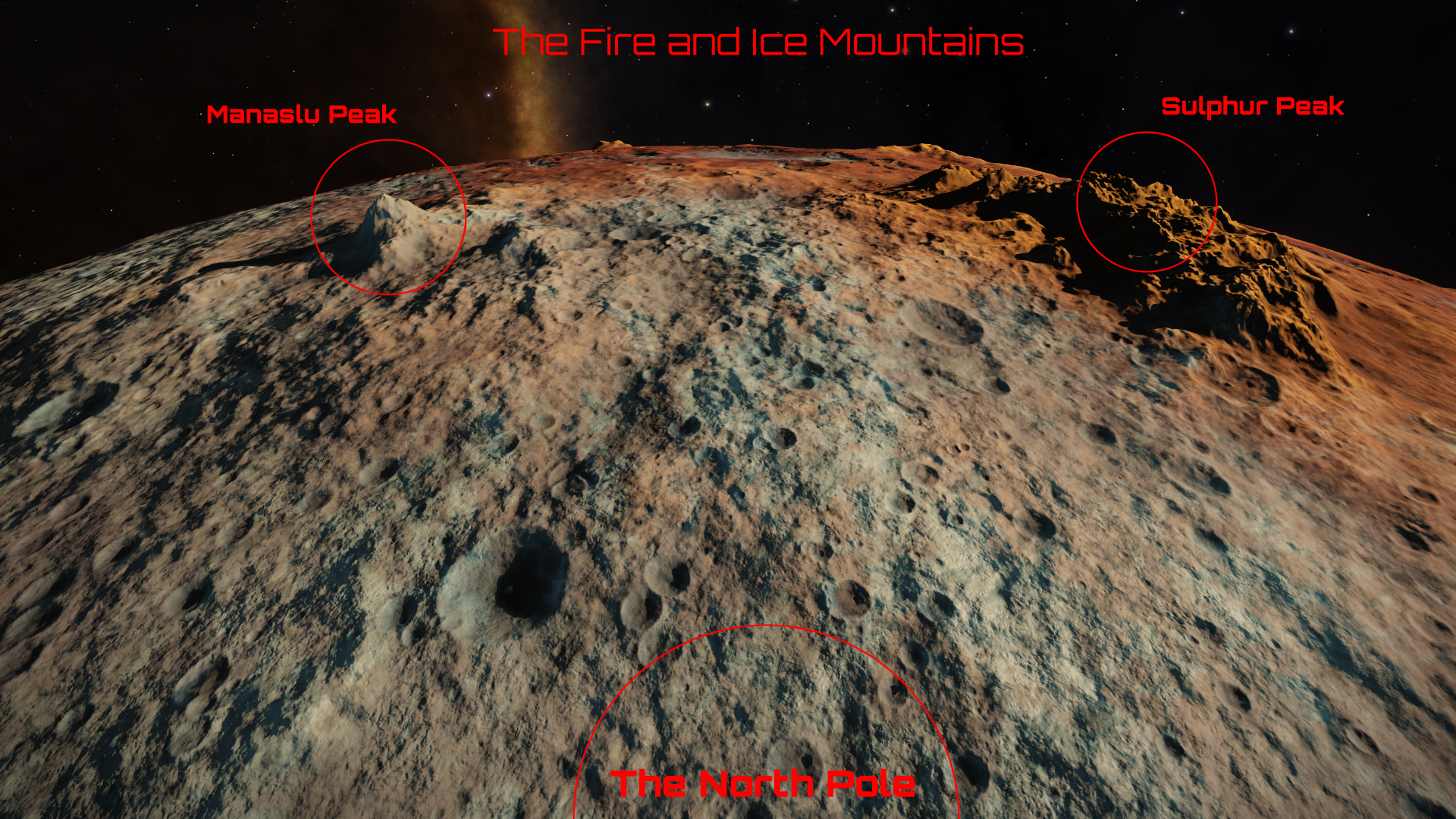 Then we measured the distance between the two peaks .. 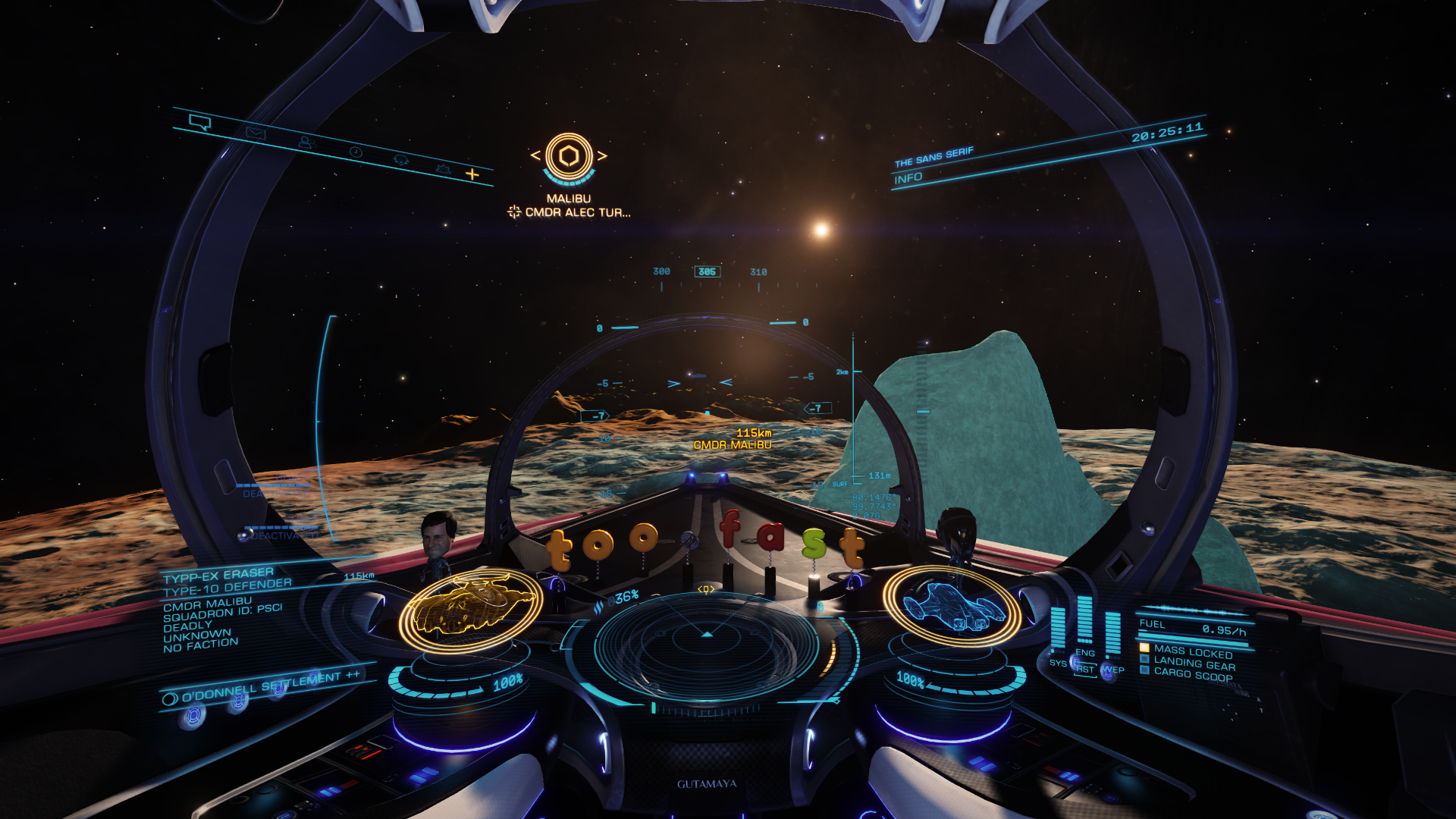 Then Malibu showed me how you can bounce fireworks off the landscape ..

Then it was time to see if Sulphur Peak was actually climbable. 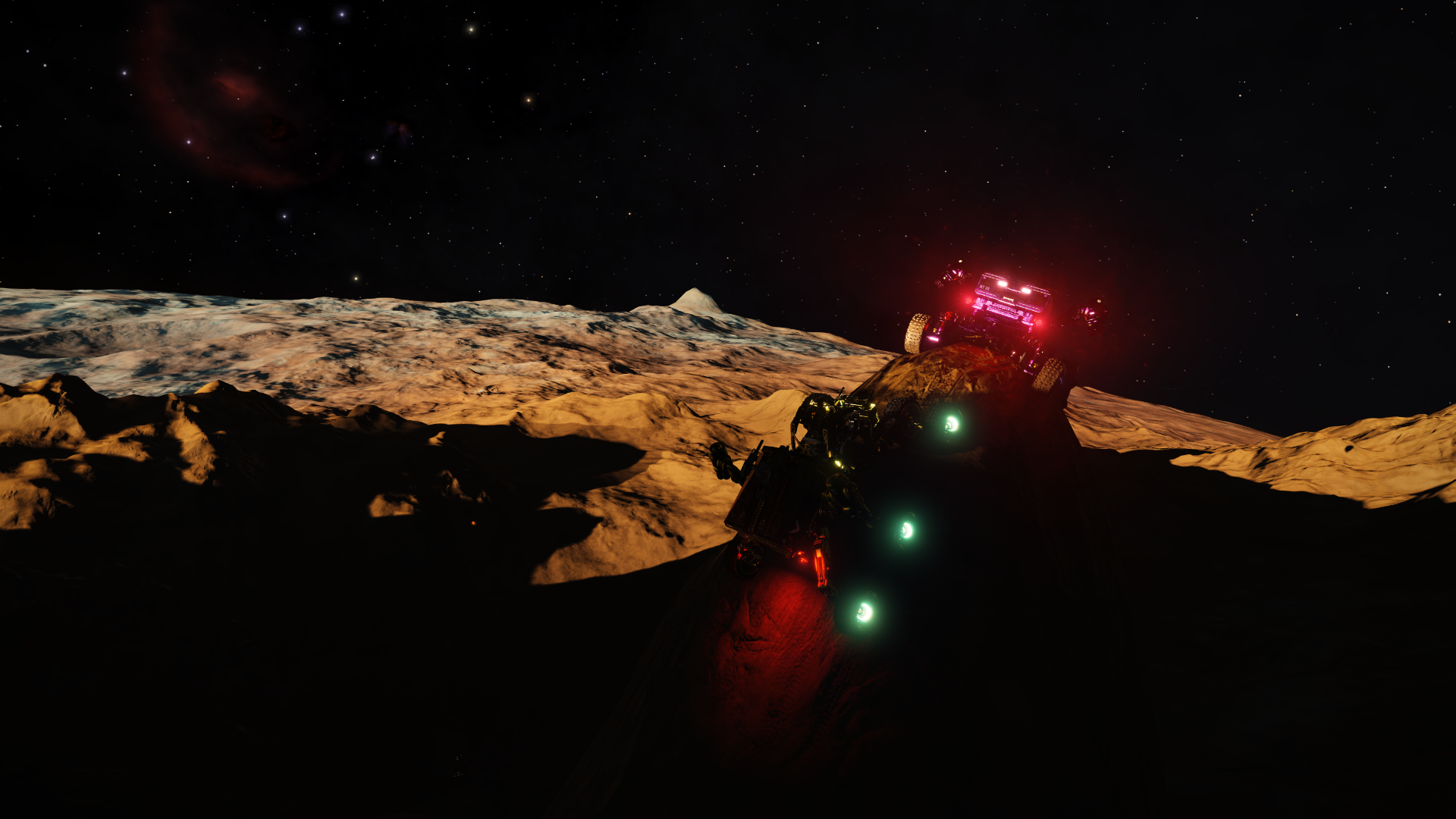 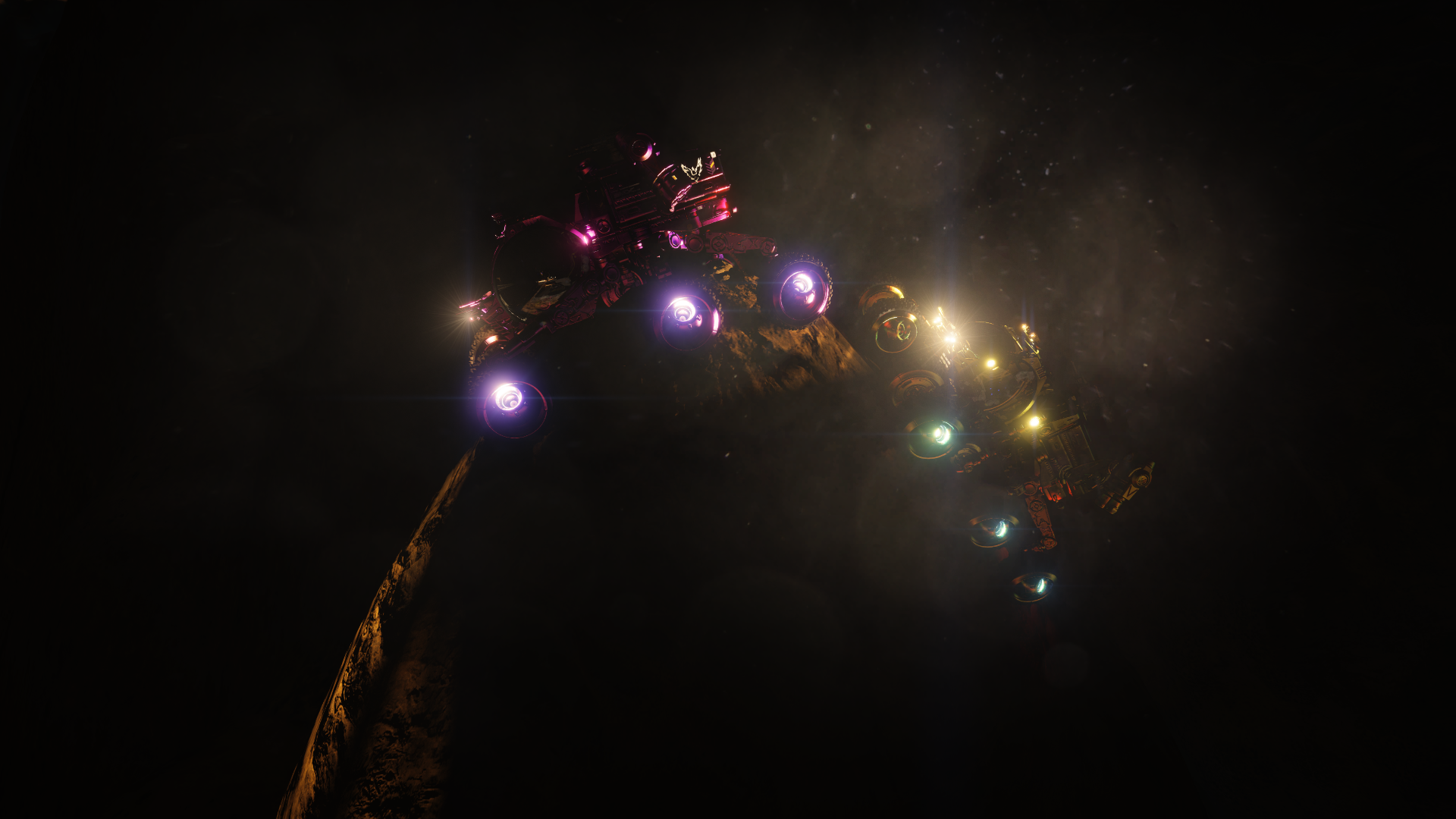 And can I say, Malibu is one hell of a good mountain climber!

And this was the view when I woke up this morning. 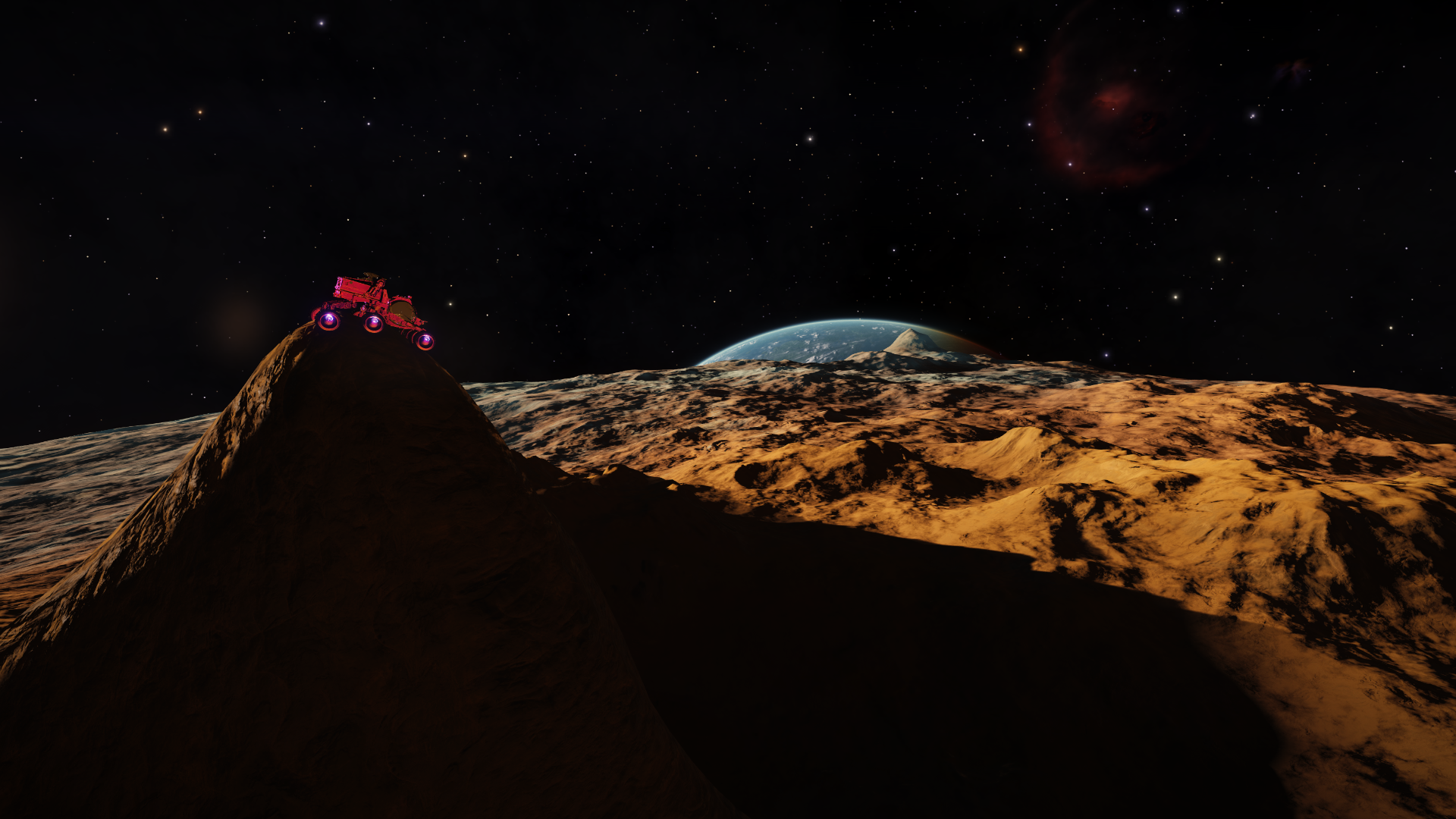 The North Pole really is a beautiful area, I'm not sure the sun ever actually sets up here. 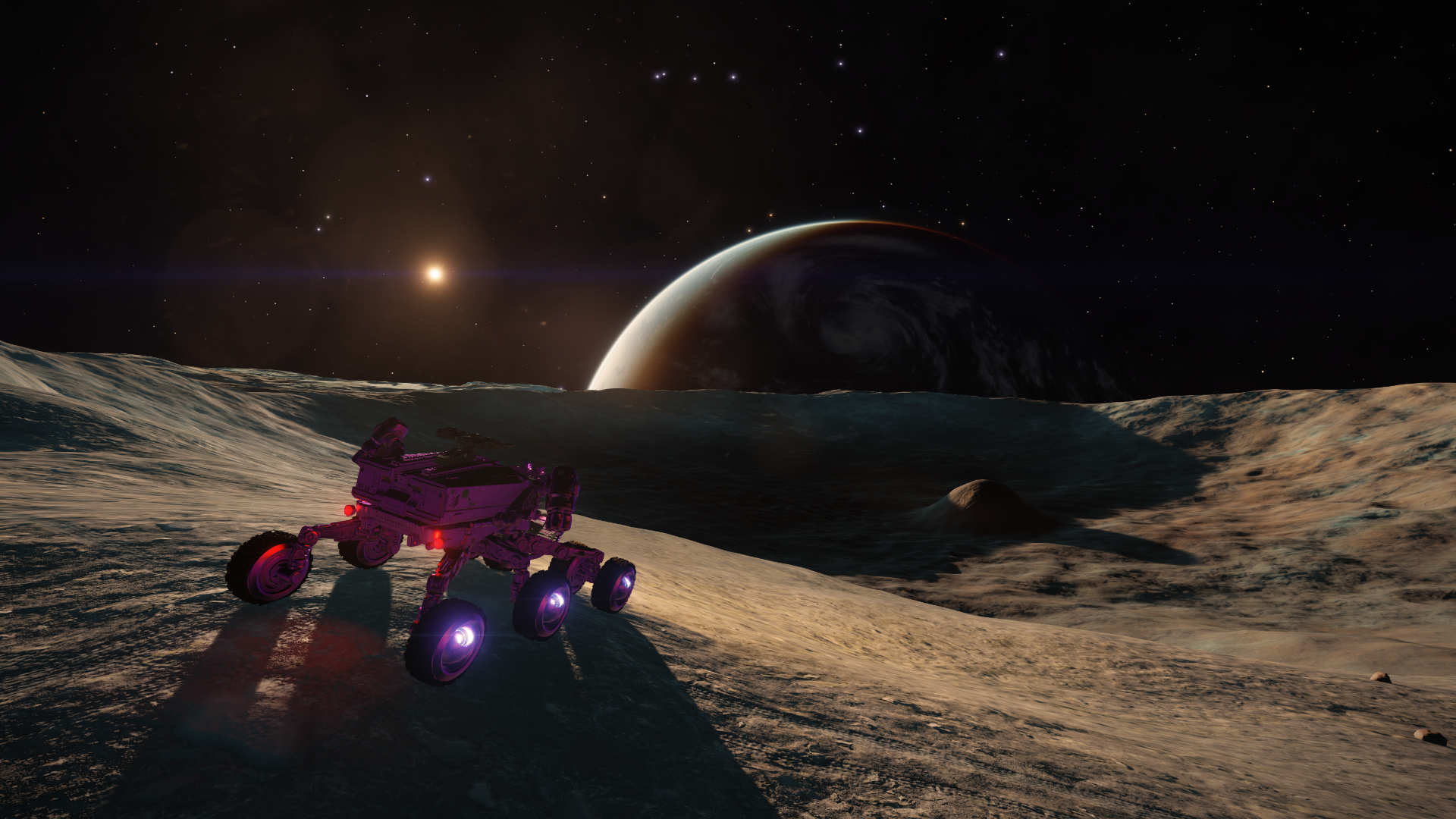 First we did some basic surveying of the area to really nail down the position of the Fire ("Sulphur Peak") And Ice ("Manaslu Peak") Mountains.


Then Malibu showed me how you can bounce fireworks off the landscape ..

The North Pole really is a beautiful area, I'm not sure the sun ever actually sets up here.
Click to expand...

Awesome Video, the fireworks look really great !!, I did a bit of exploring of both poles and you may be correct. The sun always shines on the north pole. The south pole is another matter, still an interesting place but I never saw any sun there while exploring. Nor sure if it is seasonal and in 370 days (Apasam orbital period - 746 days) it will be opposite.

Time for a 3D map update I think.

As ever, the full interactive version can be found here: http://buckyballracing.org.uk/kumay.html

Terrific work Florenus - it looks stunning! Wish I'd chosen an earlier start date now ... I'm desparate to get started on this!!! [haha]

Cinder Toffee and The Sentinel ..

First of all here's a shot from behind Cinder Toffee mountain showing the main Cinder Toffee peak in the foreground, new waypoint ("The Sentinel") in the middle ground off to the left, and Bridger Town 114km off in the distance. 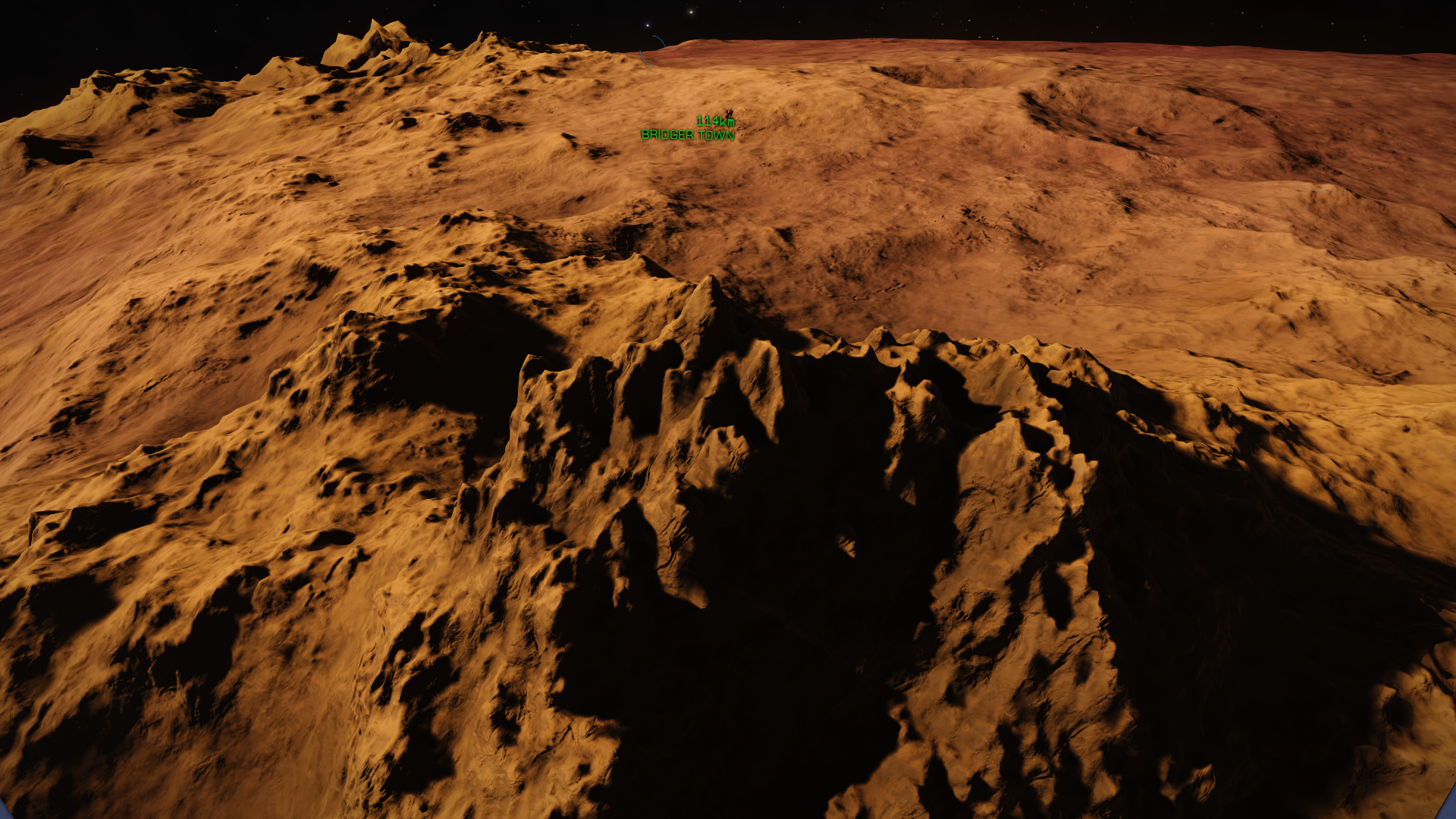 And here's another shot looking towards the mountains from behind Bridger Town. 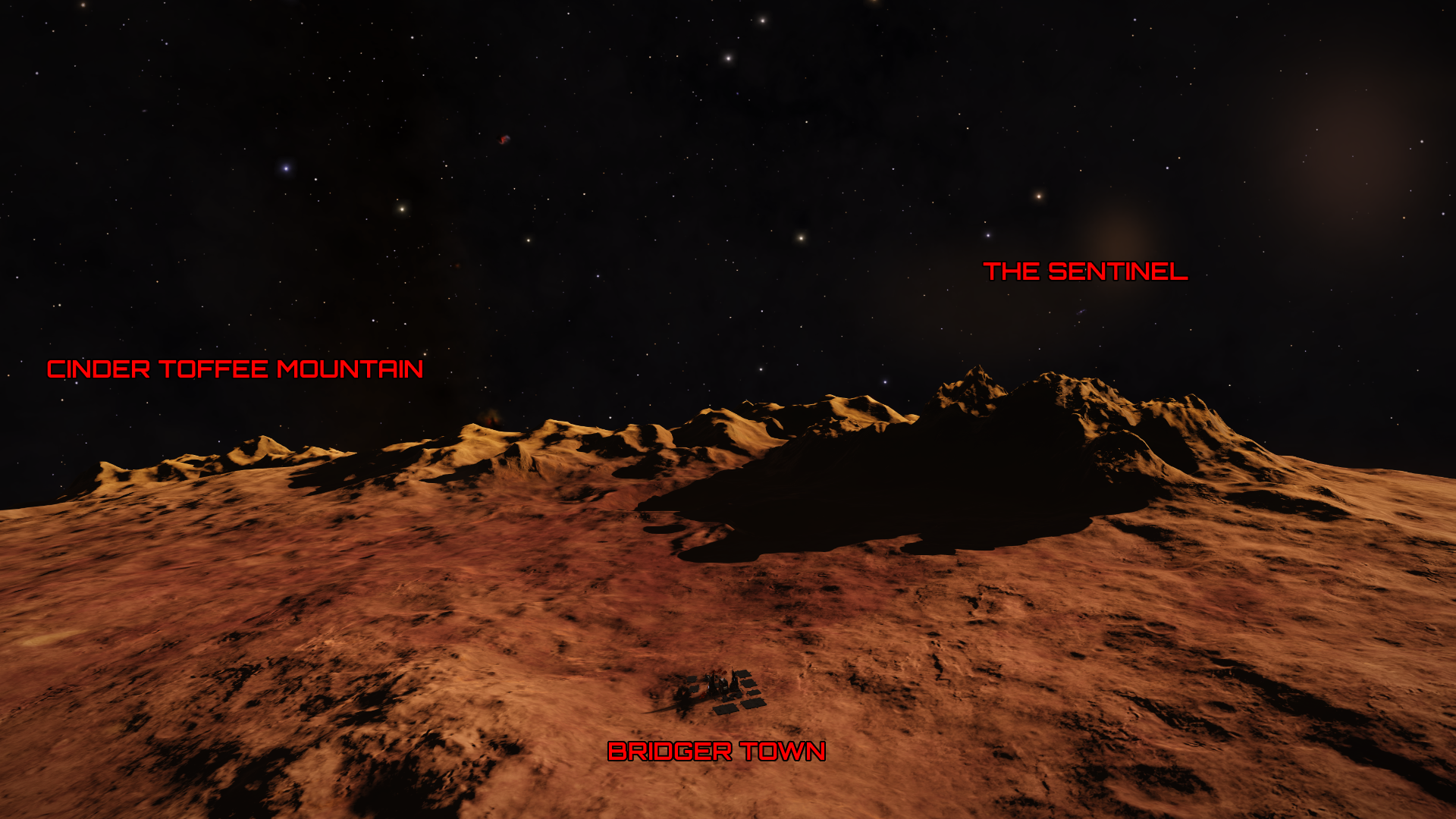 Then some close ups. First new waypoint "The Sentinel" which is the 8km high peak of the group of mountains closer to Bridger Town. 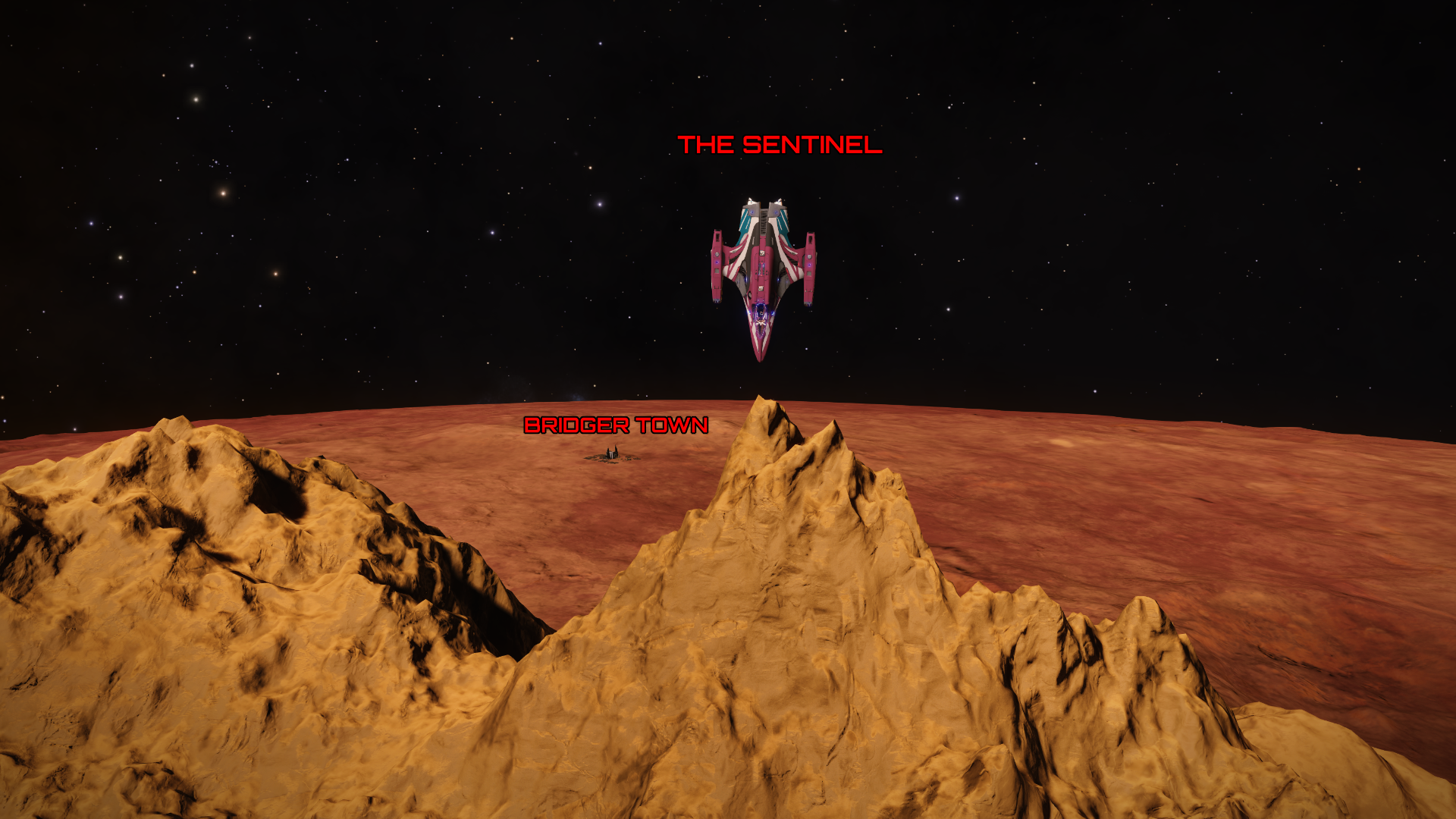 And here's another view over The Sentinel's shoulder looking back towards bridger, some 46 kilometers away. 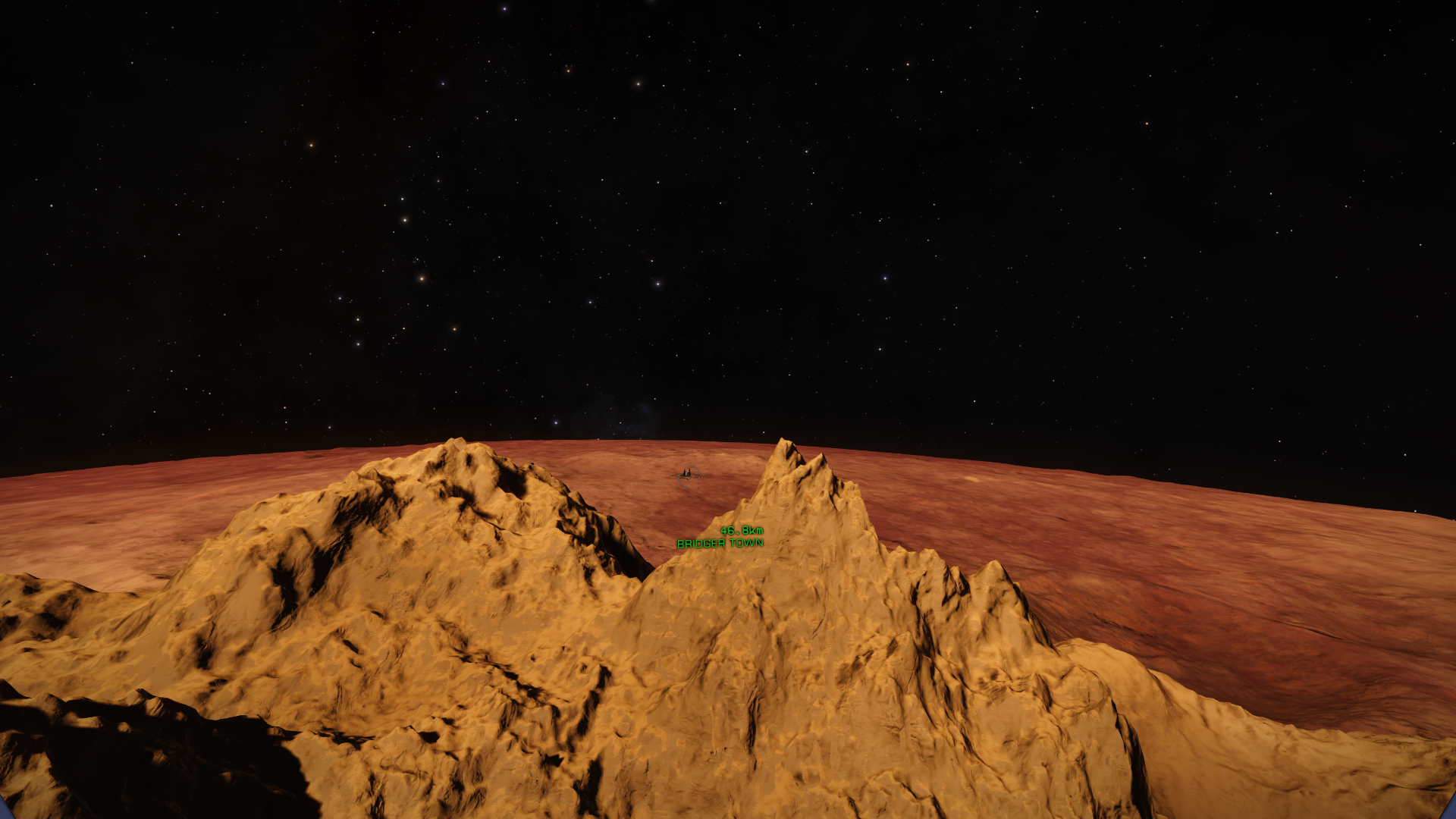 And "Cinder Toffee Mountain", which is in the further group to the left. Note: although the peak to the left initially seems more prominent, CTM is the larger, right-hand peak of the two over there. 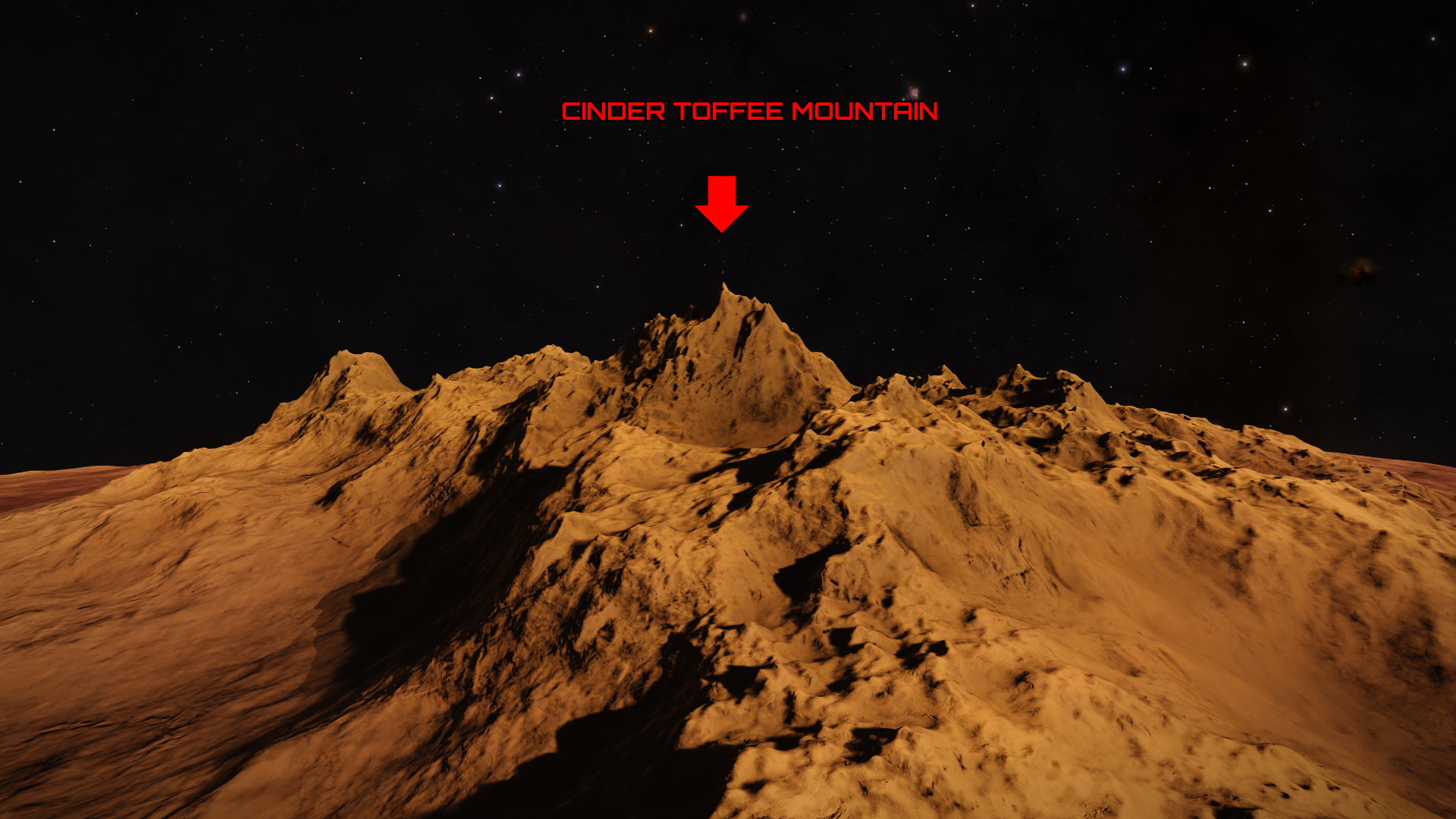 My plan now for when the expedition starts (and for those who want to try it) is to do the "Twin Peaks Challenge". Basically we set off North from Bridger Town and climb The Sentinel, then base jump down from there and head over to climb the peak of Cinder Toffee Mountain.

I forsee many deaths and a restart of the expedition, slightly older but a lot more cautious!

Here's a view from beyond the Grand Canyon Craters looking back of the canyon with the Cinder Toffee Mountains just visible on the horizon. 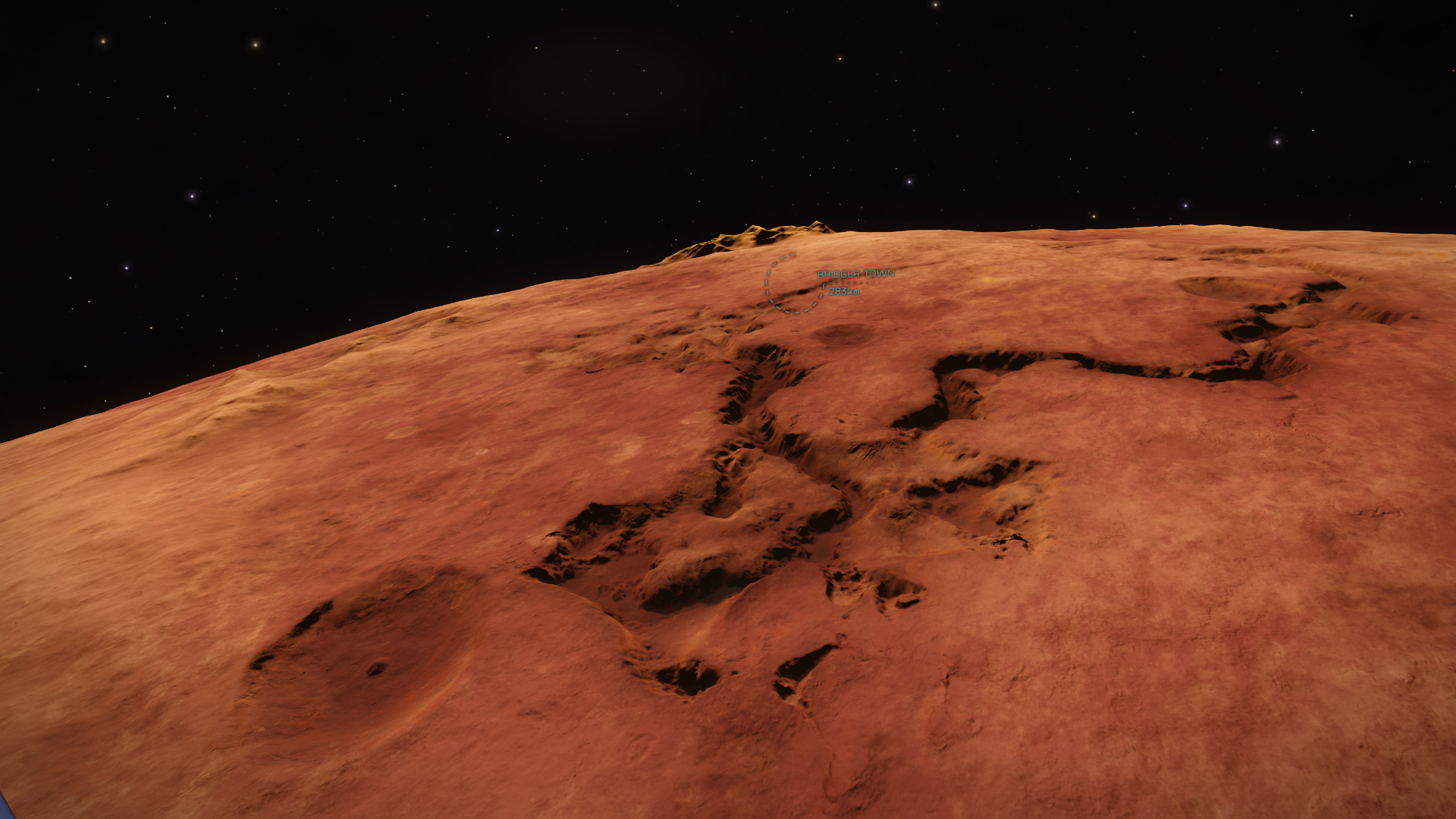 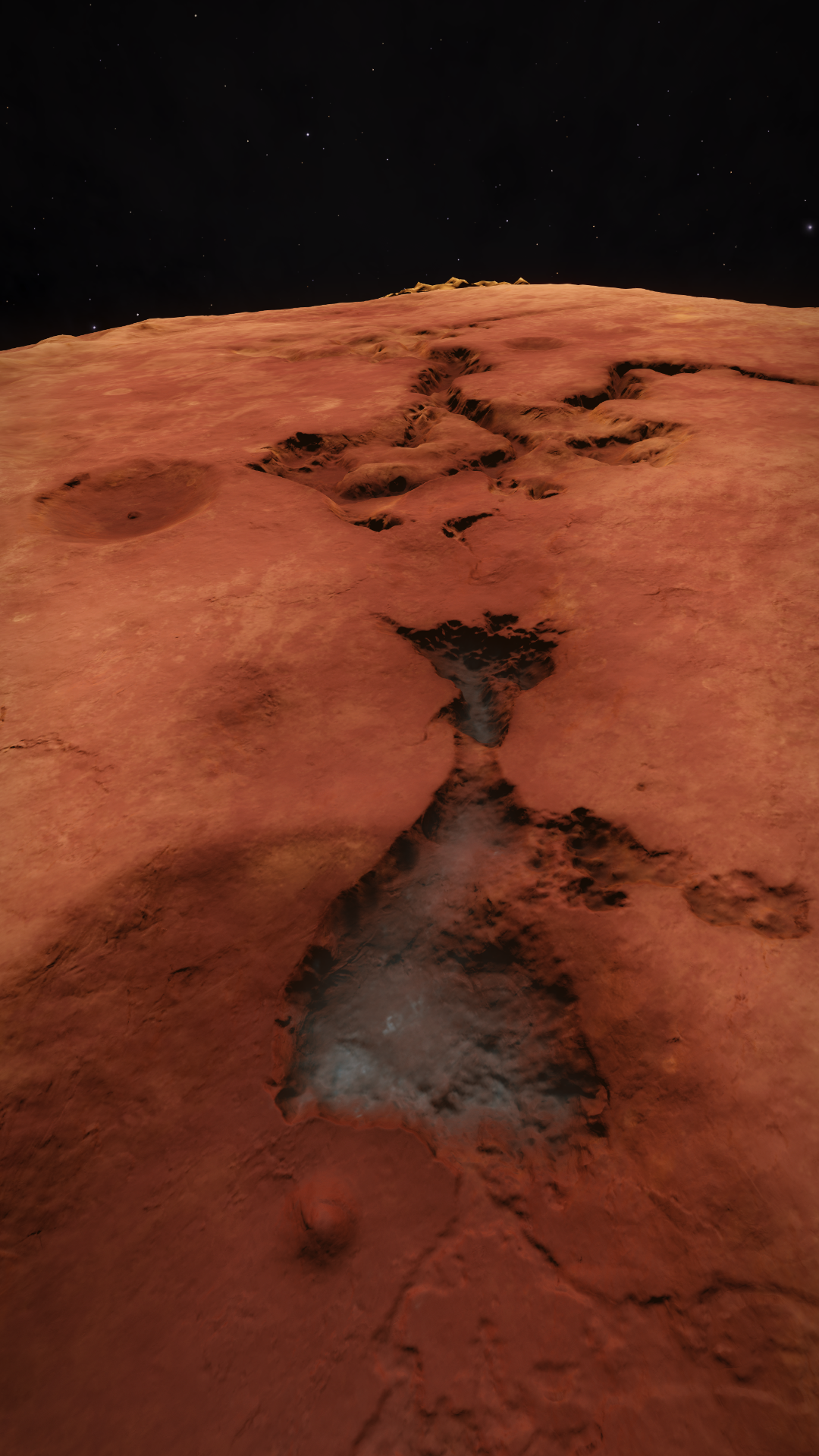 It's fabulous terrain and well worth the slight deviation to the left of the direct from GCC to geo site #6.
Meanwhile, lovely sunny day at Bridger Town seemed worthy of an aerial shot. 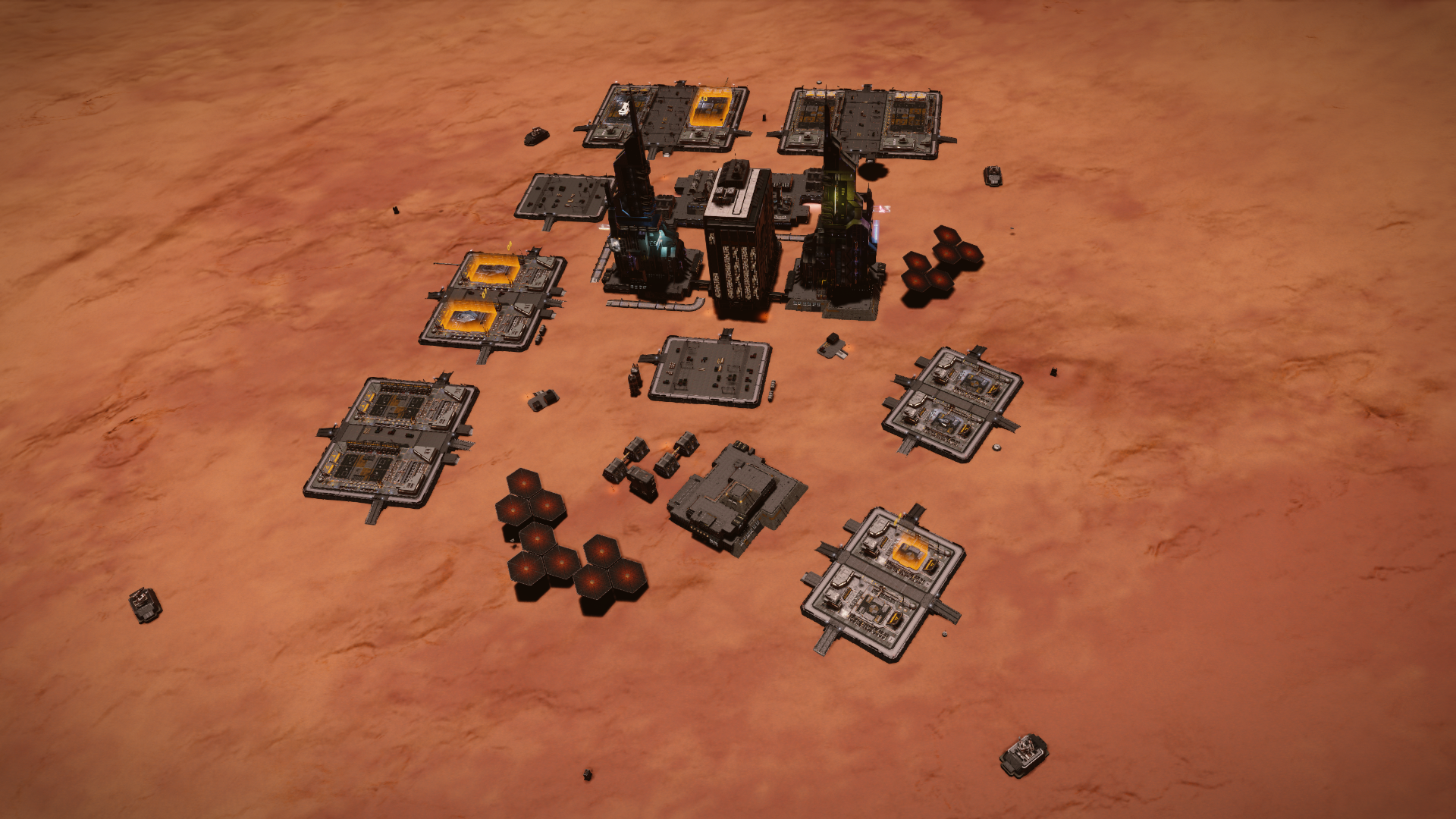 I've now created an index to all the useful posts from this thread about the various waypoints along our route in the OP of the main expedition thread (just below the spinning globe).

Decided to do the run from #16 to Knievel's Jump (despite the sun setting just as I got there). It was an absolutely thrilling ride along a series of flat bottomed canyons, one of which (about half way along the journey) I've now added as a new waypoint called "Beggars Canyon". All it was missing were the Womp Rats! Alas no video and only a nightvision screenshot. It was great fun tho. 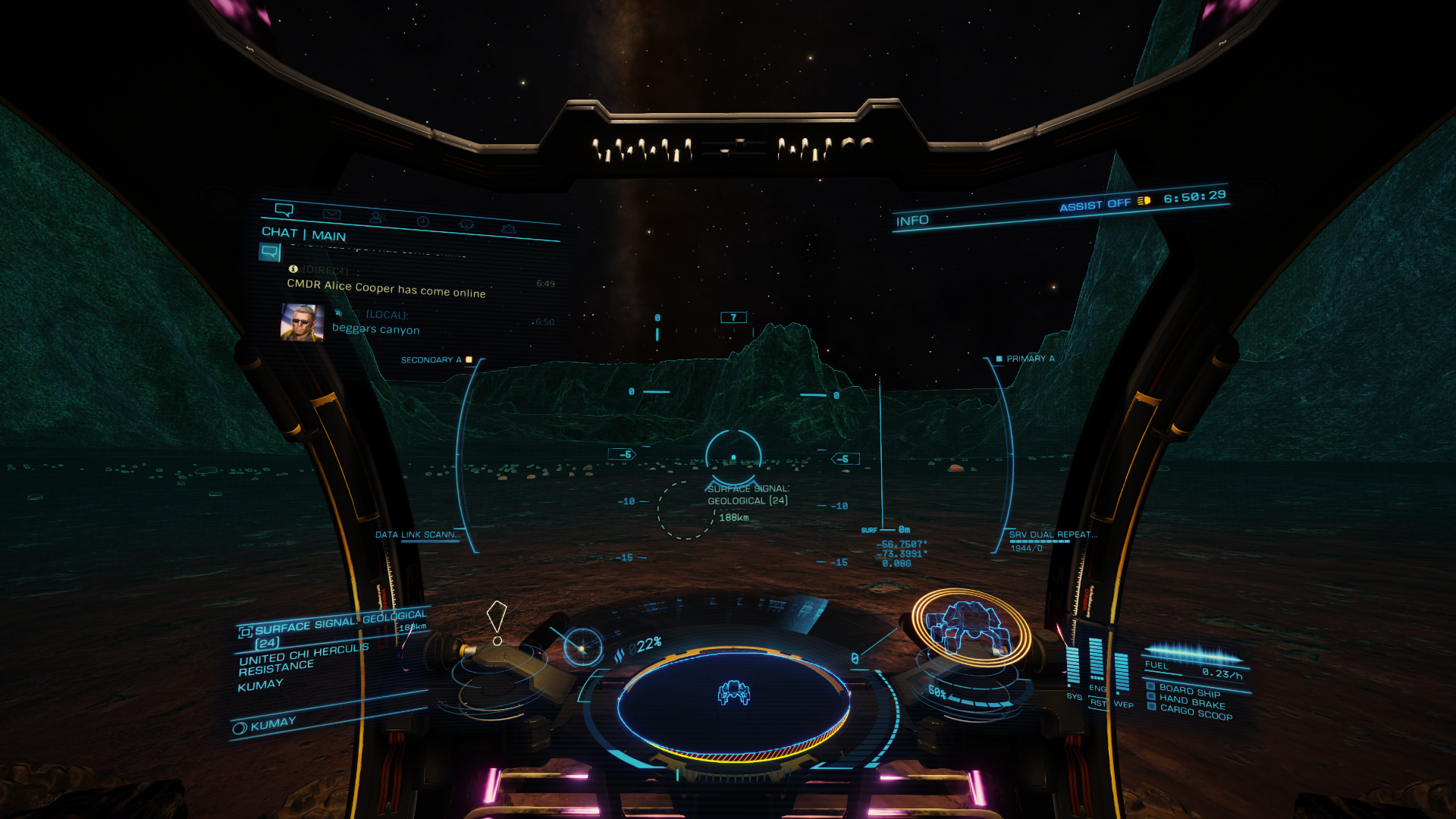 Already added the route sheet and kumay.html, hopefully Florenus will be able to update the globe in due course.

I've finally managed to get some good light this morning so that I could map a new Northern Route through a nice blue valley.

It seemed like a waste to not go down this new scenic route but for reference here is the old route:
https://forums.frontier.co.uk/showthread.php/478765-The-first-great-planetary-expedition-Chi-Herculis-Kumay-(route-planning-phase)?p=7457793&viewfull=1#post7457793

The first point, NR1 is unchanged. It's a large crater and we follow the start of the valley to the rim and then keep going: 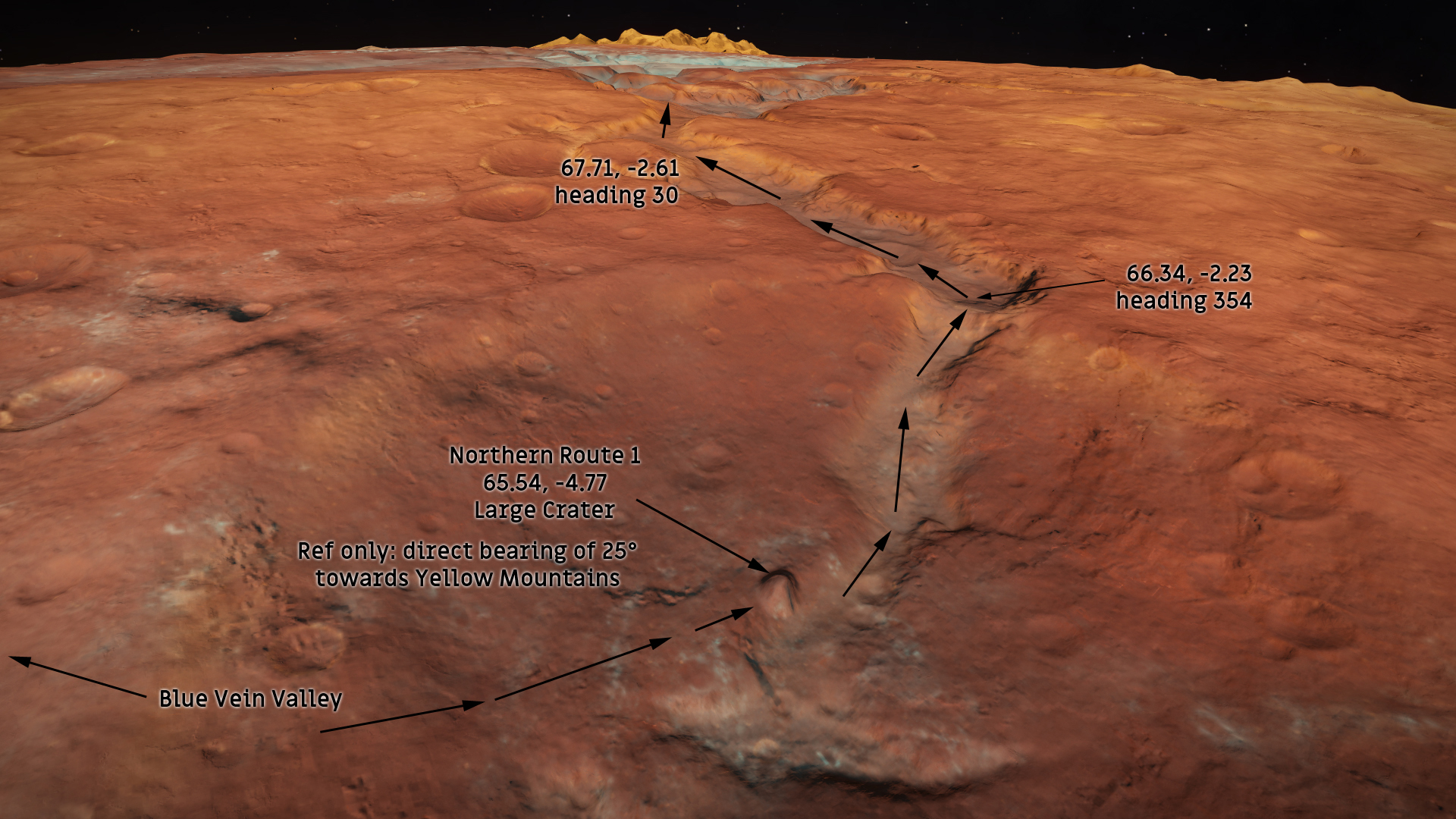 Follow the valley until it opens up but keep to the left: 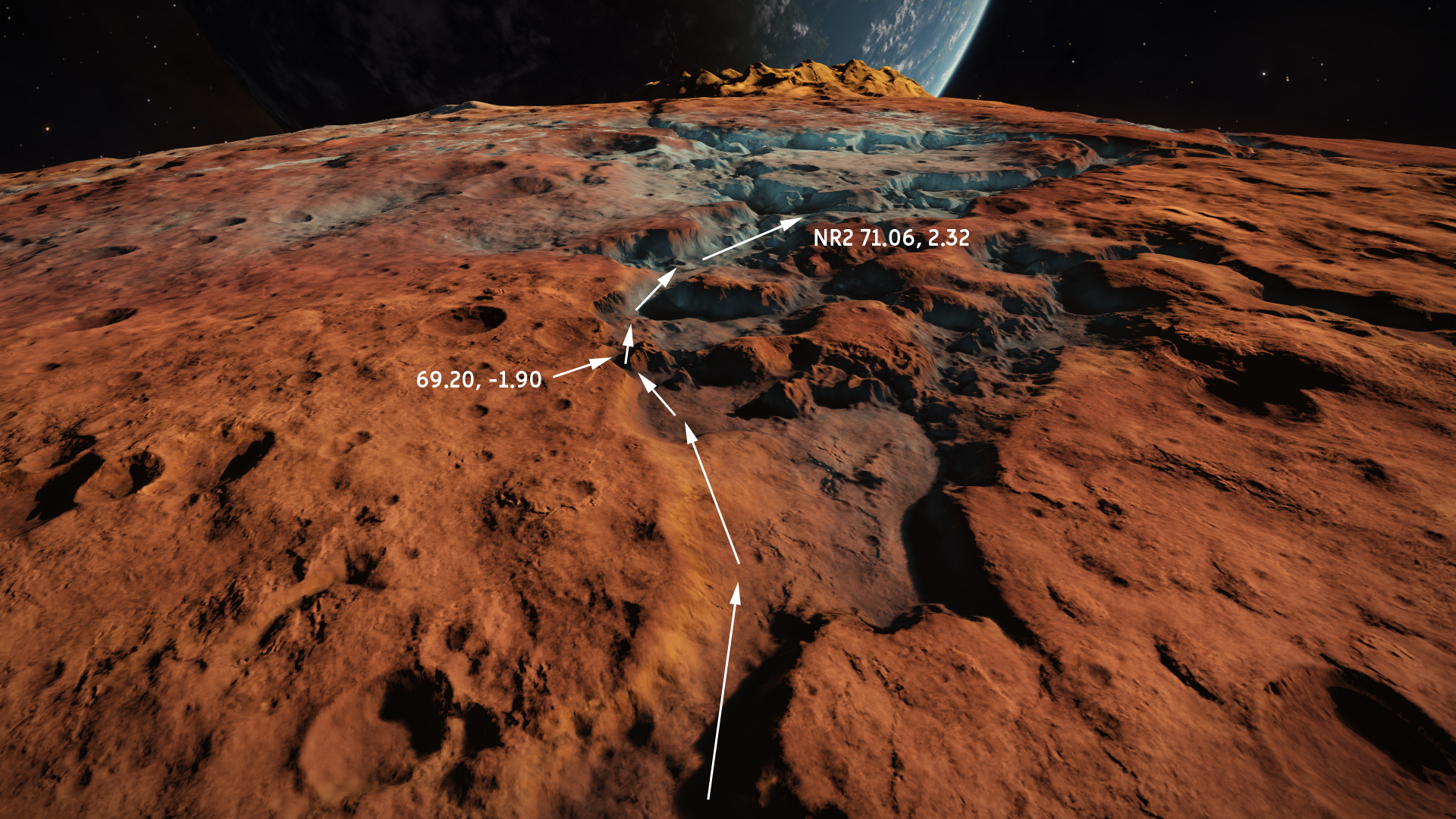 As we approach NR2 the valley turns blue. At NR2 there is a decision to be made; a direct but difficult route or the slightly easier route to get to NR3:
Edit: The second arrow below going up an ice cliff was tough.
Edit: The Direct route is not that difficult. 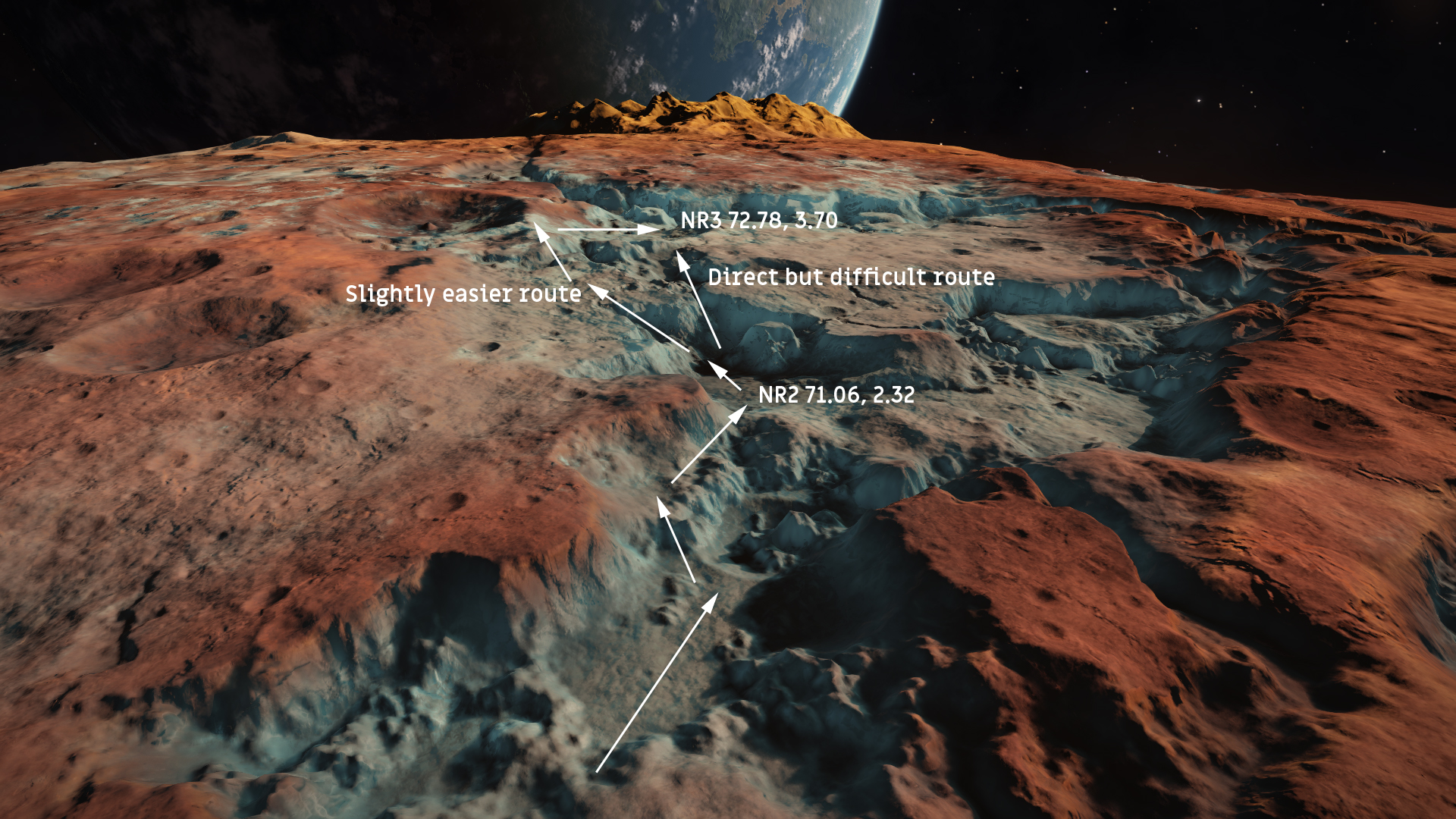 NR3 is the peak at the remnants of an old large crater. The route to NR4 is easy heading through the valley: 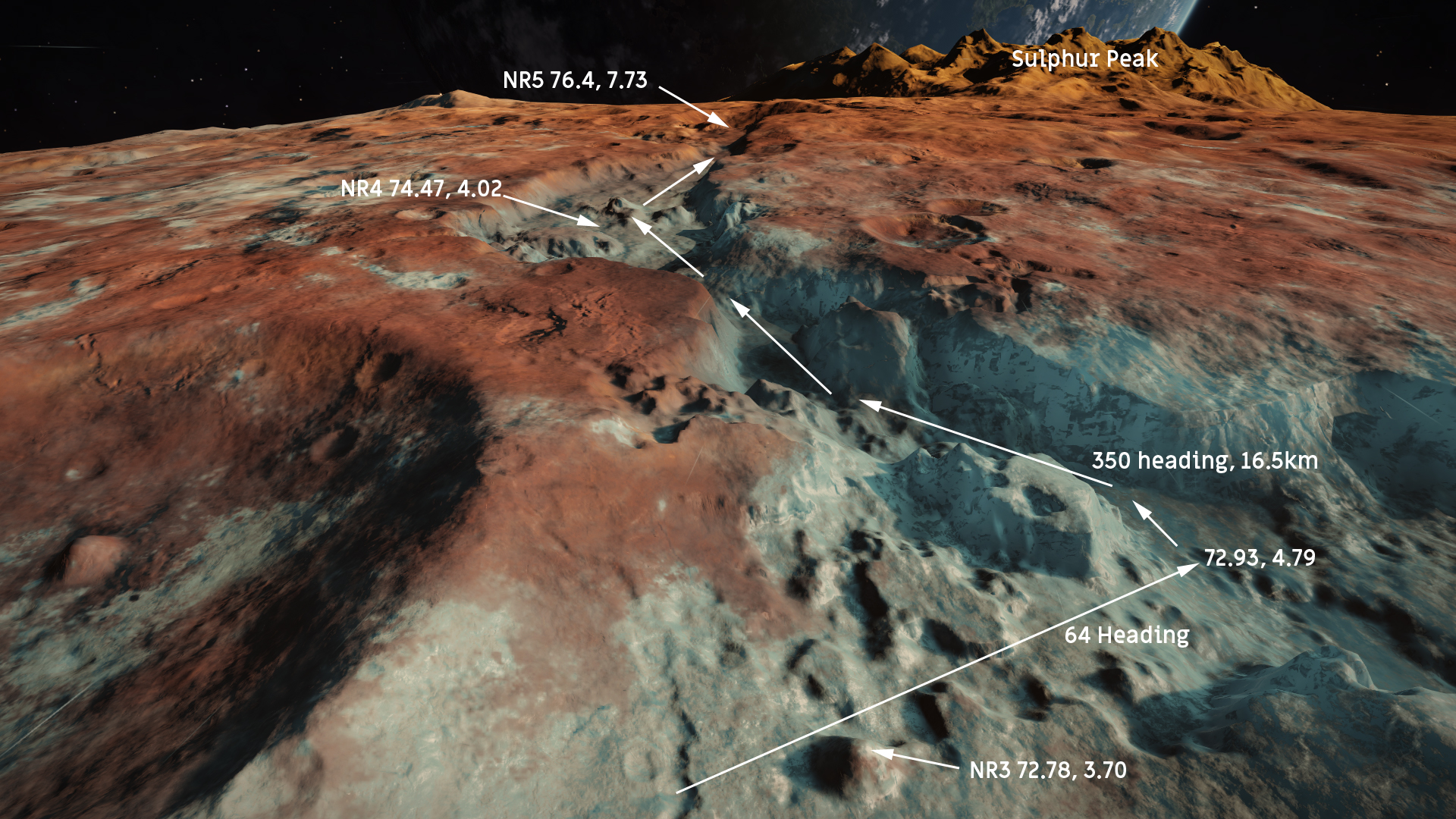 The icy looking peak at NR3 is easy to climb in an SRV. 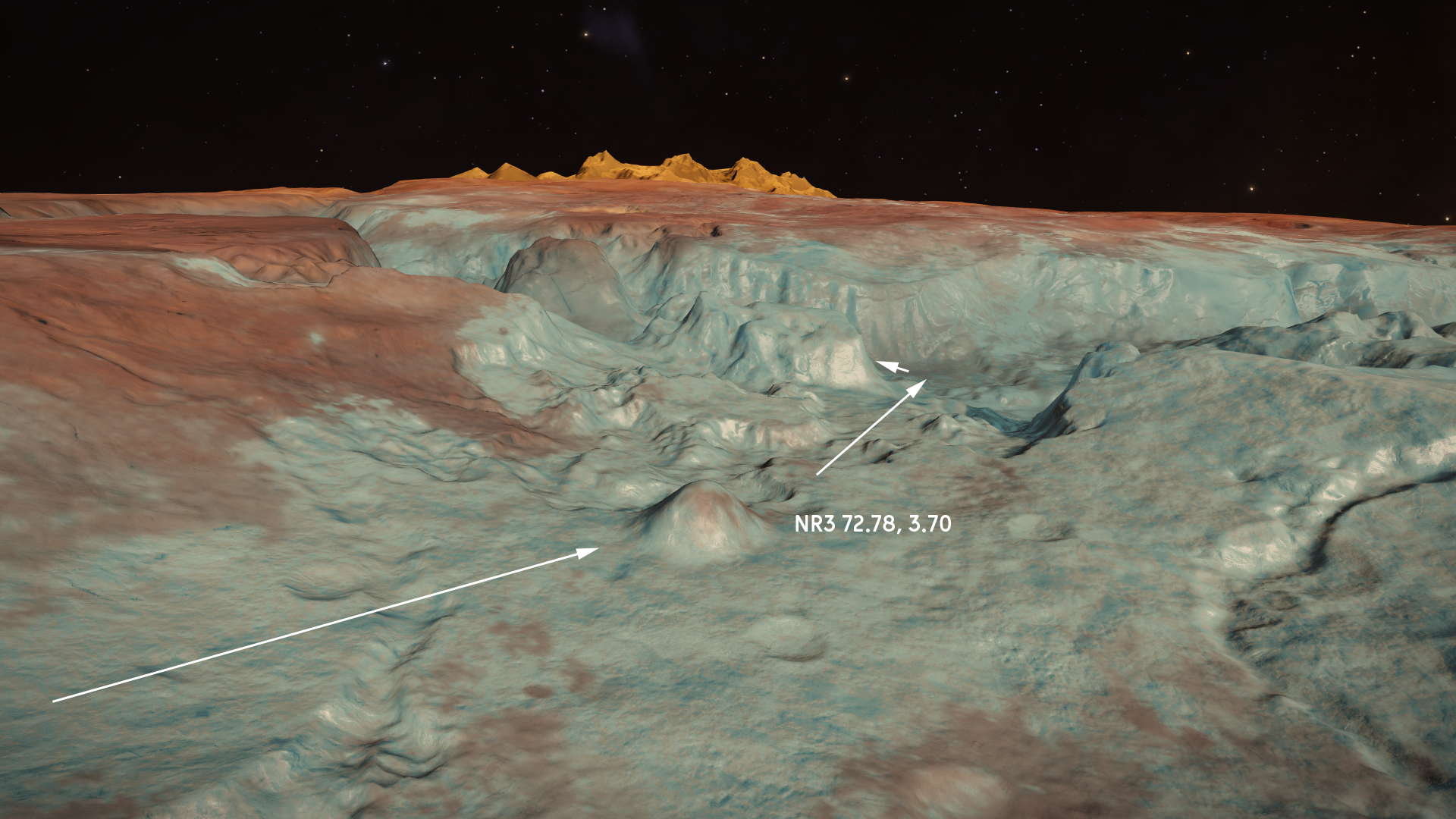 The valley now opens up into a wide area for the next point, NR4. Head straight on and to the right: 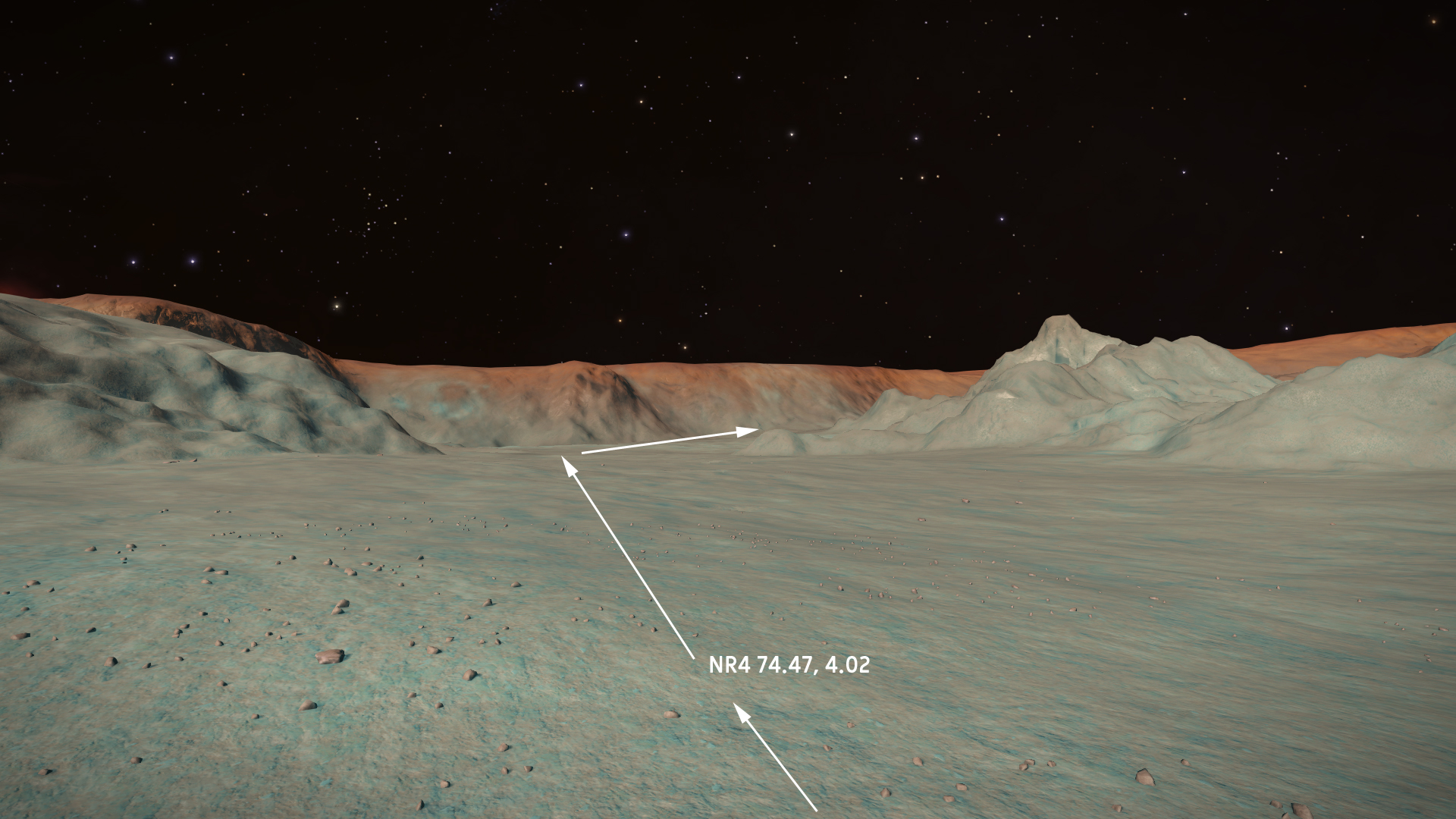 As the blue valley fades away it leads directly to this large crater, NR5. The next waypoint, Sulphur Peak is 63km away: 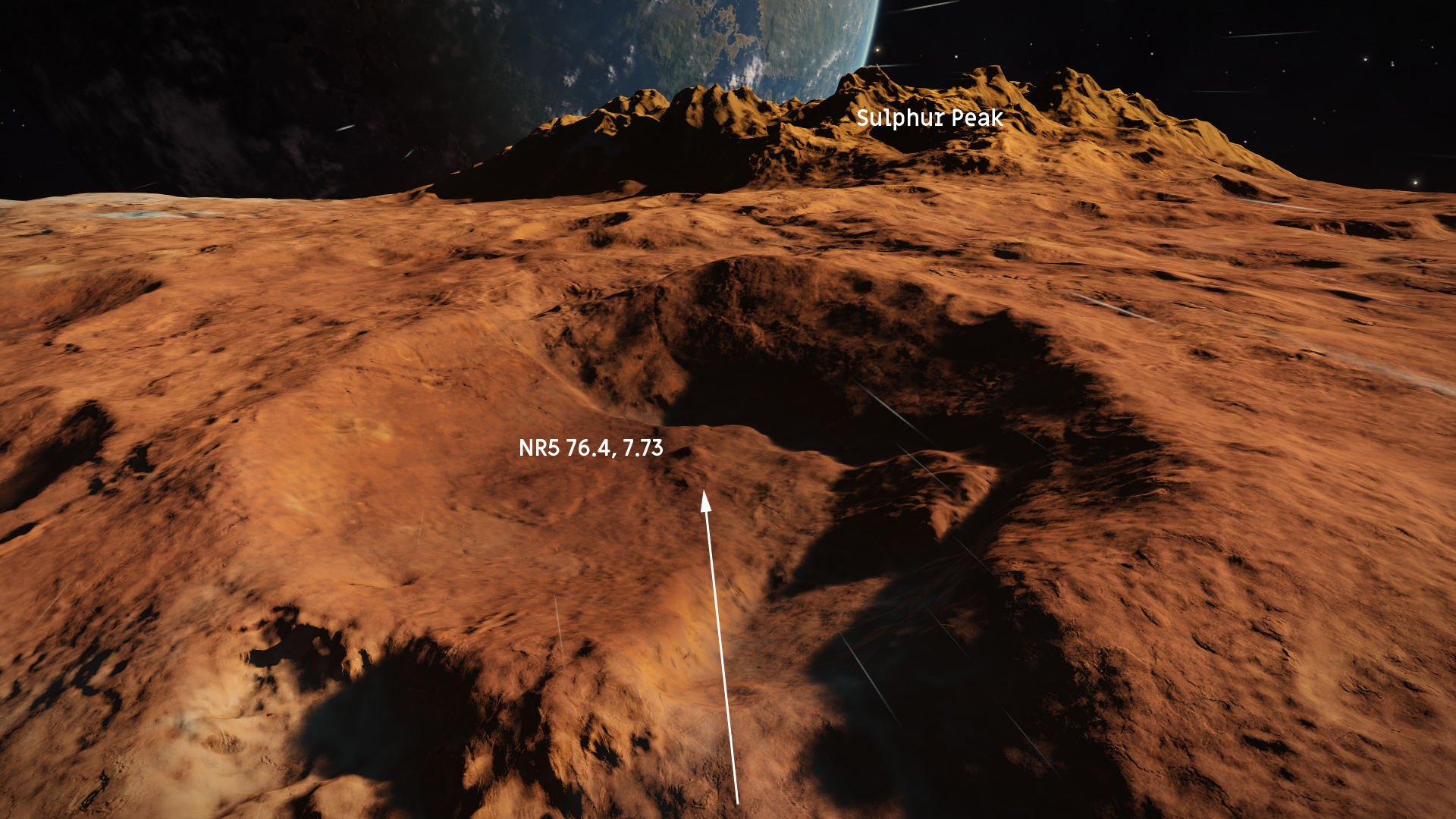 Excellent work on the Northern Route there Nick! I've now linked this into the route index in the OP of the main thread.
Last edited: Mar 18, 2019

A Northern Route for the Less Intrepid
Having finally admitted defeat on Nick Sticks' northern route (several hours attempting the passes - mostly the wrong pass, but even the right pass was impassable) I've taken a more westerly path that avoids crabbing, jumping, sliding, frustration, bad language and ice (mostly). It is further, but probably takes less time than it does trying your luck. These are safe waypoints that are probably safer than they need to be and you can admire the beauty of the ice canyons from afar. No SRVs were damaged (much) while scouting this route - I drove to all points but links to the original NR points are speculative.

1. 69.89, 0.92 - From NR1 drive to this point, then turn left and head up out of the valley at a heading of 295° (it's a bit bumpy but nothing worse than you've experienced so far). Don't stray towards the canyon which you are keeping to your right. Head towards:

4. 71.309, 1.59 - This point is just 4.3km from NR2, the closest I got, and it's mostly very steeply down from the lip of the canyon only 500m away. Just remember you're on an ice field. The safety-conscious will turn due north, keeping the canyon to the right.

5. 72.18, 1.18 - Stop at the edge of a branch of the valley. Turn left and follow the edge to a point where crossing the valley north is easiest. There's another branch a little way on but it's easy to jump. Carefully avoid craters and arms of the main valley - minor detours may be required - make way to:

6. 72.8438, 2.0831 - Three choices: on your left another n***le crater to play in, straight ahead for the wimp's route north, to the right a moderate drop to the canyon to pick up the NR3 waypoint on the original Northern Route. The choice is yours. There should be a chance to get to NR4 later.

It starts at North Route 1, and just heads straight for the North Pole.
Sulphur Peak was added to the route at a later stage so that would have to be taken into account.

The original co-ordinates that were in the spreadsheet are gone now but all of the features were on the direct route heading north.
It was only when I really looked at the valley to the right of this route that I thought it would offer a more scenic journey.

Hi Nick - I missed the first iteration. I must say I enjoyed working out the route far more than constantly trying and failing the icy path. Running down icy canyons is even more fun - I had no trouble with BVV (although getting into BCV was tough) - so I wanted the alternative route to give access to your Northern Route so explorers could get back into it at any time. It's there if anyone wants to use it.
We just have to remember the words of the Prophet: A man should always know his limitations.
Last edited: Apr 5, 2019
You must log in or register to reply here.
Share:
Facebook Twitter Reddit WhatsApp Email Link
Top Bottom