The Forgotten Initiative: Hunt for Raxxla! ALL REPORTS/PROGRESS UPDATED ON THE BOTTOM

After today's big announcement, it is clearly confirmed by Frontier that Chapter 4 will bring amazing Lore in the Codex including Raxxla and The Dark Wheel. The Forgotten Initiative has decided to take lead on this new insight and send their Scientific Discovery Squadron, First Expedition Squadron and Dark Pit Task Force on the Hunt for Raxxla! We have grown from 3 CMDRs to 200 CMDRs in less than 2 months and are in coalition with Canonn, EG Pilots, Wolves of Jonai, The Hive, and Close Encounters Corps!

"The Forgotten Initiative is the living legacy of explorers, privateers, and scientists who push the limits of exploration, defend the human race against galactic threats, and develop new technologies in search of intelligent life."

HUNT FOR RAXXLA - PROGRESSION AND REPORTS:

[video=youtube;CBz-7vNxAVg]https://www.youtube.com/watch?v=CBz-7vNxAVg[/video]
#5: Mystery Surrounding Codex Logo, remodeled by CMDR Serbanstein
NOTE: Logo has been updated to have 33 dots in the Hexagon. ONGOING INVESTIGATION #7: Saturn Hexagon Coincidence, CMDR NewkTV DISCREDITED
Discredit Reason: No-Hexagon appears to be on Saturn in-game. CMDR DustyEggSauce attempted to jump through and Supercruise through each pole. I'm in. Heading there (to 17 Draconis) tonight and will spend as much time as necessary researching to confirm or deny.

After today's big announcement, it is clearly confirmed by Frontier that Chapter 4 will bring to pass amazing Lore in the Codex... to which includes Raxxla and The Dark Wheel.

The Forgotten Initiative has taken helm on new rumor before and was born out of The Gnosis and her Cone Sector Hype Train. Join us in the Hunt for Raxxla and see what we are all about! We have grown from 3 members to 180, we are in coalition with Canonn, EG Pilots, Wolves of Jonai and The Hive!


CONSIDER JOINING THE FORGOTTEN INITIATIVE:
"The Forgotten Initiative is the living legacy of explorers, privateers, and scientists who push the limits of exploration, defend the human race against galactic threats, and develop new technologies in search of intelligent life."
- INARA Link: https://inara.cz/wing/4114/

Holly crap. You might have actually done it. There's no way this is all coincidence. This could be the start, the beginning of the end of the hunt.

Isn't that logo fan-made though?

taotoo said:
Isn't that logo fan-made though?
Click to expand...

Whether it is coincidence or not, it doesn't really matter - 17/16 Draconis has the word "Raxxla" in the system description for it.

POST EDIT: I don't actually know that, but saw it in the video. Hoax? I trust these chaps, but clearly need to visit there myself to see.
Last edited: Oct 19, 2018

Comandante said:
Whether it is coincidence or not, it doesn't really matter - 17/16 Draconis has the word "Raxxla" in the system description for it.

POST EDIT: I don't actually know that, but saw it in the video. Hoax? I trust these chaps, but clearly need to visit there myself to see.
Click to expand...

The Order is a player faction, so the description is also player made.

Han_Zen said:
The Order is a player faction, so the description is also player made.
Click to expand...

Ah... So, is the system description driven by players too? I didn't know these things. Thanks for letting me know though.

Good to know, it looks like it slipped by all of us. We have made contact with the real PMF (The Order) and seeing their reasoning for choosing such a system and how FDev allowed lore to be inserted into their description.

Sorry to say it but calm yourselves Commanders. I applaud anyone who seeks the answer to Raxxla, but may I direct you to this threadnaught where you will find a fine group of individuals who have been tin-foilling this for quite some time now: https://forums.frontier.co.uk/showthread.php/168253-The-Quest-To-Find-Raxxla

The TDW logo IS fan-made and can therefore be totally discounted. I myself made the same mistake a while back (as have others before and since), so don't feel ashamed in that.

Please do come over to our other thread and share your thoughts though! I think with Chapter 4 approaching we have a golden opportunity to make some headway with this mystery once and for all. The more minds we can apply to it, the better!

This looks interesting tbh. I may be nothing to be excited for, but it is really interesting. Plus I am not doing anything so I will go and have a gander at it.

I am fascinated by The Dark Wheel and the lore of all that. I have been following the quest for some time.

Why aren't they flying towards it?

They tried, it stayed solely behind the ship... the helm COULD NOT see it at all, only the Multi Crew Mate. When they rolled it rolled, when they flew through supercruise it followed closely behind always pulsating. They even dropped into normal space... it dissapeared. When they went back into supercruise it reappeared. Multiple crews saw it and it wasn't instanced to one console (Xbox) but multiple. We are sending a mass exploration attempt right now to collect more evidence.

Better video will be uploaded in the morning. I'm about to hit the sack.

It might be worth taking some Guardian cargo. If the theory is that Thargoids need to pull you in witch space. That might lure them out. Or some Thargoids stuff. Shame there aren't Thargoid eggs. That would def lure them out!

Cmdr Shijima said:
The TDW logo IS fan-made and can therefore be totally discounted.
Click to expand...

The dashed line on the Beta livestream Raxxla image, however relevant it would be to the search, has 33 dashes (6 + 5 + 6 + 5 + 6 + 5), not the amount shown in the current representation. Here's a more accurate (excuse the pixels, it's mspaint) representation: 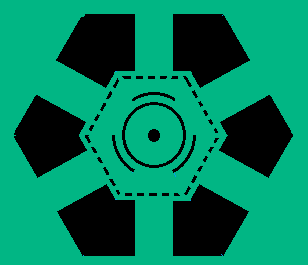 Compare it to the stream if you want.

So... It's a sun not a planet. Saturn Hexagon Coincidence is one of the most interesting things I've seen in a while. Similar symbol also means Monad, or the Absolute. "Thing, being, entity, power, force, reality, presence, law, principle, etc. that possesses maximal ontological status" "in Gardiner's Sign List the sun disk symbol is used for ancient Egyptian god Ra" Only missing a cobra, sign of royal authority. "According to an ancient tradition, the sun is also black."

Children of Raxxla are a player group which are aligned to Drew Wagar's Salome.

The staging post is where the player group set up their base of operations to search the Formidine Rift area.

When passenger missions came along Frontier asked for a bunch of notable sites from players, this was one of them "Children of Raxxla staging post".