Hi everyone, thinking of starting a group and gauging interest!

My idea is born from an encounter I had last night, I was minding my own business in my Cobra, clean and clear, queuing for docking at Freeport. There where a couple of anaconda's mucking about so there was a queue.

I was in my contacts, requesting docking when I got literally mugged by someone. It happened so quick I don't know how I dies, either it was 2 weapon hits (no more) or I was rammed by something very large like an anaconda, either way I was dead before I could switch to comms! I estimate 1 1/2 seconds.

The real pain was I had just spent all my hard earned credits on Consumer Tech and was trying to get some bank roll so I could get involved in some role play piracy/bounty hunting. Now, I'm not so stupid that I didn't keep some insurance money, however I did lose 120K of cargo and have to start with 1K credits again, this has effectively ruined my Beta 1 experience.

The worst was it wasn't even a noble pirate, it was an anti-social, low down mugger. He didn't even contact me, just hit me. He had Anaconda money so my 100K cargo meant little to him, everything to me. This guy was the lowest of the low, I've literally had turds that demand more respect than this guy. (caveat, may have been an accident but how do I know??)

While at the moment I hate this guy, I'm aware of my mistakes. I was too trusting in an unregulated system, I put too much of my money in my cargo, I was not looking. This guy exploited me/the game to make a gain so I mustn't just about it, but what is the correct recourse?
My encounter leaves me with a thought, what really can I actually do about low life's like this?

Not a lot, seems the rich get richer, the exploitative exploit, the bullies bully and no one bats an eyelid.

We need a new response to these criminal threats in the 32nd Century. Therefore I am looking for recruits into the GIA 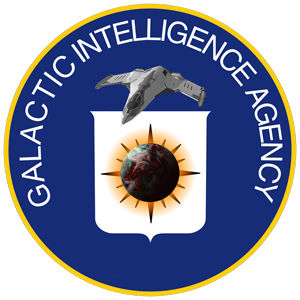 The ethos of the Galactic Intelligence Agency is to be simple, we will detect and investigate criminal activity in and around the federation, we will intimidate criminals and disrupt their activities, we will seize their assets and eliminate these threats from our sky's!

We will do this by hiding in plain site and fighting the right fight, we are a covert agency that is not afraid to head into anarchistic space and do what [it thinks] is right. While we protect the ideals of the federation we will not be accountable to the federation and any federation dealings will be denied. We will operate black projects in anarchistic systems targeting the criminal infrastructure and lack of local security to mitigate the threat to the people of the federation.

We will achieve our aims in these ways; we will conduct covert patrols and intelligence gathering in sectors in and around the federation but not be restrained by borders and other bureaucratic non-sense, we will actively share information with other security forces (For instance the Galactic Patrol of the Empire), we will eliminate threats with extreme duress and we will listen to informants and victims.

So if you wish to fight the good fight, help protect the honest gamers out there, and are up for a bit of 'good guy', light role play please leave a message.

If there's interest out there I'll push forward some. I think there may be some Federation Traders out there that are genuine good guys, have made a few bucks and are looking for a bit more adventure. This is the group for you! NPC Bounty Hunting, NPC Pirate Hunting, Combat Zone Black Ops, PvP Criminal Hunting, Federal border patrols and information gathering. Stuff you can do while you travel the federation!

One last thing : We are not interested in hunting low bounty players, or even ethical pirates (see Cmdr Freman for Pirate ethics) as long as they don't cross us. We don't aim to tangle with other security groups however given the covert nature a degree of "cross-talk" and decorum will be given. We are after BAD GUYS, particularly Players that bully or exploit.
Last edited: Oct 6, 2014

Sounds great for me.

Kind of like Bureau of State Security (BOSS) or Bureau of Intelligence (BrInt) from some old Paper & Pencil RPG's.

Hi everyone, thanks for the response!

Can all those willing to join up PM me to confirm? (In the GIA we are all called Commander Smith, your anonymity is our concern!) I'll try to keep membership private between us to avoid griefing when not on duty.

I'm also pleased to announce a tentative security collaboration with the Galactic Patrol, who are also keep to fight the Galactic griefers out there!

If you guys wanted to suggest your gaming times I'll try to organise a meet and greet online this weekend, looks like we have our first wing of commanders.

Also please indicate how tooled up you are, and your combat experience so we can plan black ops assault groups and high visibility patrols/monitoring.

In response to Friendly, we are not in game just yet, just gathering the numbers before we get going, I am looking to run an online presence on Beta 2. However we will be meeting up to gauge response perhaps this weekend, there's trouble in Eranin and criminal activity is sky rocketing!

In addition to out informant and information gathering efforts we rely on likewise commanders for our intelligence. If you have tip off's of known criminals or griefers, or information the GIA can use to identify those folk, please either reply to this thread, or if you wish PM me. All PM's are strictly confidential and anonymous, information is shared with authorised security forces only.

grogan645 said:
Kind of like Bureau of State Security (BOSS) or Bureau of Intelligence (BrInt) from some old Paper & Pencil RPG's.
Click to expand...

I was thinking more American Dad (Fun and hi-jinx, with security undertones), but yea every MMO needs good and bad sides!!

Good luck with that.

Good luck, Cmdr Blatant! I hope the GIA and the Relentless will meet in-game, and we will have fun chasing each other!

Cmdr Fremen said:
Good luck, Cmdr Blatant! I hope the GIA and the Relentless will meet in-game, and we will have fun chasing each other!
Click to expand...

I'd like to make it quite clear, the GIA are after griefers and NPC Criminals primarily. We have no interest in piracy, domestic crime, black market trading, or J walking. These are crimes the uniformed officers of the relevant districts to deal with.

I'm sure The GIA will come across Relentless members from time to time ( Cmdr Freman), as both the GIA and Relentless operate outside of normal jurisdictions, however we are not actively pursuing 'ethical' piracy, which your leader is quite well versed in.

However we thank you for your interest and for coming forward. Your names, ship registration numbers and command structure has been added to our intelligence database for our information.

We have recently intercepted encrypted communications by the Pirate Group Relentless. A radical escalation of pirate and criminal activities has been detected in the I Bootis system.

Due to the escalation of activity in the Eranin system, Relentless are operating a concerted effort to intimidate and accost legitimate traders in the I Bootis system with cargo destined for the war zone. Our criminal statistics division is predicting a peak of activity this weekend.

The GIA are calling for an URGENT MOBILISATION of all operatives to tackle this threat to Federation security. Please report to HQ IMMEDIATELY.

Our mission is simple, we are to protect legitimate traders, and combat black market trading with extreme duress.


Please be aware, this is an organised role playing exercise organised in conjunction with Cmdr Freman. Normally we would turn a blind eye to Relentless activity however this group/RPG event has been organised and we've been invited to participate as the GIA, representing elite security forces and bolstering the Federation security.

If you do not wish to be involved you may opt out and you will be treated like any other Commander (and likely attacked by Relentless this weekend).

If you do wish to play along, there is a potential award of Massive bounties, as the Relentless folk are running a competition to get the biggest bounty on themselves.

Cmdr Freman has kindly offered his Mumble services or we have skype too.

Blatant said:
The ethos of the Galactic Intelligence Agency is to be simple, we will detect and investigate criminal activity in and around the federation
Click to expand...

Totally, I was hoping with w interest we can do a CIA, KGB, MI6 parody like GIA, GKGB and MI3206, each one based in but not confined to the federation, alliance and empire space respectively, but we'll see how much interest there is

Plus it'd give the pirates something to avoid, and its a stand against griefers

Criminal Forces engaged at the Nav Beacon in I Bootis.

Reinforcements requested. Please respond, announce your presence with "GIA, prepare to die!" and have at them.

Haha blatant ... you bet it failed!

/me feels outnumbered and outgunned...

Intercepted communications in I Bootis have revealed pirate activity and movement plans to us.

There will be a confirmed Relentless pirate presence in I Bootis, at the Nav Beacon near I Bootis A today between 8pm and 1pm GMT. GIA operatives have been dispatched to the system.

All GIA Operatives, please report to HQ and assemble at Chango Dock to mount operations to disrupt this pirate threat.

I will be at Chango Docks around 8pm, be great if anyone on the side of good can join me! I will have Skype available for external comm's.

Lots of juicy bounties on us! Aiming to be on later so can try to collect them

...And I hope you've got no hard feelings, another GIA agent in the Sidewinder, I was shooting at everything that moved! I didn't even realise that you were a player, just after the explosion.
You must log in or register to reply here.
Share:
Facebook Twitter Reddit WhatsApp Email Link
Top Bottom