At Lavecon this past weekend, Buckyball Racing Club was pleased to welcome participants to the second annual Lavecon Buckyball Race. We ended the weekend with some 27 competitors over the two days (a few of whom managed to fit in two attempts, though we were prioritising those who had not already had a go). If anybody would like to try their own hand at the race, details are below.

Congratulations to commanders Alex Brentnall, Purrcat and Archon Fury who took the top three places (and the prizes - two presented on the day, the third will be in the post), and a big thank you to all who took part. 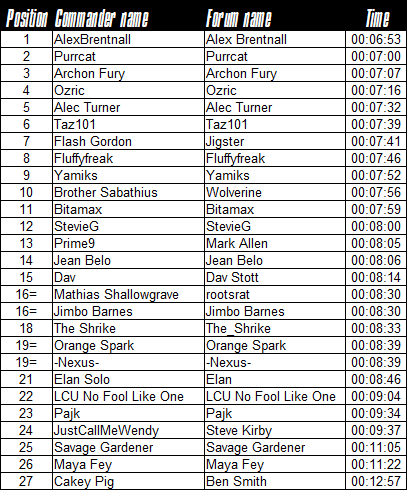 The race was run over a short course involving two dockings and a neutron star. Competitors were required to fly in a specific unengineered Eagle we provided. A variety of control options were available (Thrustmaster HOTAS, Xbox controller, keyboard and mouse, or combination of the above), but we did require competitors to stick to default control bindings only.

This actually only requires three bookmarks (at Hoshide Dock, Crown Terminal and Vernadsky Station) - plotting a route from the start to Crown Terminal using the "fastest route" and "use neutron boost" options in the galaxy map will automatically plot via Jackson's Lighthouse.
The ship

The ship used was an un-engineered Eagle mkII with the following outfitting:

** for thrust left/right/up/down, these were in addition to the default bindings (Q, E, R and F on most control schemes)

6 minute difference between 1st and last seems big. Probably kb+m players did well, because hotas players need their joysticks with their own settings to fly as normal

I tried VR rig of CMDR Awesome and I can tell I didn't know how to fly it, different throttle and joystick, with different key locations and bindings made it hard.

Don't forget Landing Gear being L! And forward only throttle!!

No it was great though, a really nice little course that at first glance might appear to be straight forward, but actually challenged you with quite a few different techniques. There was scooping from a Neutron Star, then a medium Supercruise approach with an Outpost in a tight orbit around a non landable planet, then a very short Supercruise approach with a station in orbit around a landable planet. Definitely a round of applause deserved for Drakhyr and Furrycat for finding and plotting this race, going to the effort of taking all the kit down there so that we could all have a go, as well as manning and guiding people through the race over the whole weekend!!

To be fair, considering I was completely thrown by not having the thrusters on the HOTAS (having been about 2 years since I stopped using the keyboard for them) and the fact that I just overshot my stop at the Outpost by about 100Km/s and so had to loop around, I was shocked my time was as quick as it was! For a good few hours I was top of the leaderboard, and then I heard it proclaimed that my time had been toppled by Archon Fury, alas! Then there were whispers that Alex was going to take part, and I knew we were all doomed he took the lead, obviously.

There was a moment of attempted sabotage around this point, don't worry not of the race itself, but apparently the dastardly Cmdr Turner entered the room where Alex was captaining of team in the middle of an Artemis game, leant in to his ear, and whispered "7:03" (just 1 second faster than Alex's current leading time) [haha]

I was actually in the room when Purrcat did his run, he was the only one to make use of Furrycat's lovingly brought Track IR (I completely forgot!), and his look of surprise and satisfaction when he realised he had taken the top spot was great! But Alex wasn't going to take that lying down!

A big thank you to everyone else who took part too, it was great watching some of the runs being done. A big congratulations to Mark Allen for taking the top spot for Frontier employee, for the second year in a row! And once again to Drakhyr and Furrycat for their efforts.

Loved it. Best 8mins of the weekend cheers lads.

The final leaderboard. Let me know if your CMDR name or forum name is wrong!

Just wanted to congratulate drakhyr and furrycat on running an excellent race event over the weekend. Having done it the year before I know how much effort and time goes into setting up and running something like this so bravo guys, good job and congratulations (and thanks) to everyone who came down to the LAN room and took part (it'd be nothing without the great community of race fans, old and new alike, who come along, give it their best shot and hang around to talk racing, watch the other competitors and genrally join in with our little racing community).

My own personal highlight was watching Drakhyr instructing Yamiks on how to fly a spaceship. Anyone who knows Yamiks can probably imagine what that was like ... rofl! [haha]

I hope I speak for drakhyr and furrycat when I say that it's comments like this that make it all worth while.

P.S. apologies to Alex Brentnall ... for what it's worth, rumours of his alleged defeat didn't put him off his stride one iota - he was a steely eyed missile man who steared his Artemis crew to victory in a manner that Kirk himself would have been proud of!

MUSKETEER said:
6 minute difference between 1st and last seems big. Probably kb+m players did well, because hotas players need their joysticks with their own settings to fly as normal

I tried VR rig of CMDR Awesome and I can tell I didn't know how to fly it, different throttle and joystick, with different key locations and bindings made it hard.
Click to expand...

God, tell me about it. I had a go at the VR rig with unfamiliar bindings and it took me nine and a half minutes to land the damn ship! Yeah, that was definitely it ... I would have easily won if I'd been more familiar with the controls!

Alec Turner said:
God, tell me about it. I had a go at the VR rig with unfamiliar bindings and it took me nine and a half minutes to land the damn ship! Yeah, that was definitely it ... I would have easily won if I'd been more familiar with the controls!
Click to expand...