The No Man's Sky Thread

Too bad my ultrawide setup I had for Elite is now packed up for construction in the house. :/

I've been 'here' before, so am inclined to be very cautious, but....... NMS seems to be running with no crashes for me at the moment.

The change I made was in GoG to disable their in-game overlay. I did this after I found a post from 2018 from someone saying that they had to disable their Discord overlay to prevent the game hanging.

I've since run the game for many hours across two play sessions, left it running whilst cooking, overall more than long enough to experience at least one crash 'normally', and (so far) no more crashes. Not one!

Thinking back, as best I can recall this recent 'bad spell' seemed to coincide with the GoG client being updated - so I wonder if this has been my problem all along. I'm keeping my fingers crossed.

No one tell Mrs PiLhEaD.... I'm looking at you StarLightPL...

I finally picked up a proper exploration ship. It has a nice clear cockpit view and two S-class enhancements gives it a really good jump range. 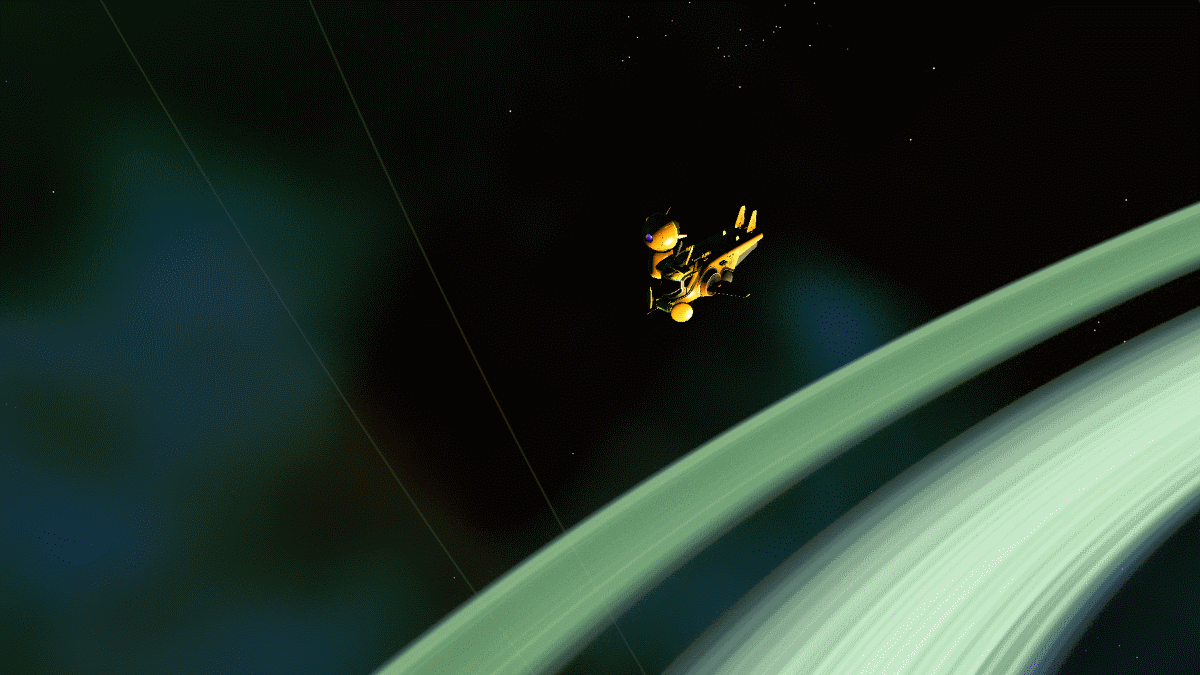 And here's almost the first planet I found with it.... 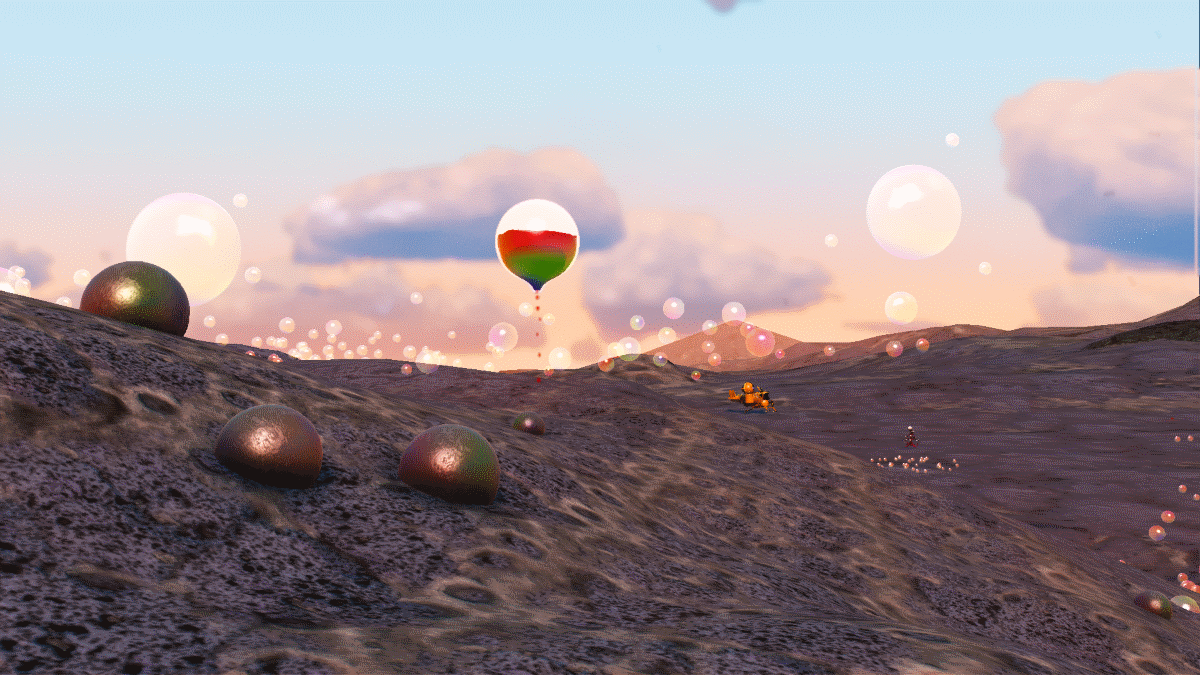 I've found hell. And I love it! By day it's super-heated and by night super-frozen. Yet firestorms can come at night. The planet is benign for around 20 seconds at dawn and at dusk, assuming a storm isn't blowing through. Even with S-rated protection you dare not stay out for long. It's like being in a pub's Sunday Darts-League side and deciding to take on the All Blacks at rugby. The pain flows in one direction and it never stops. And I flipping love it!

And I have a question - if you could choose three four changes to the game, what would they be? (Imagine HG are reading!)

1. A consolidated view of all stock, across all ships, containers, etc, with an option to consolidate all stocks into a single slot (e.g. gold held across multiple ships/storage containers all gets put in ONE place) - this view/activity only available on your freighter.

2. A search function for materials/resources that shows planets that you have visited that contain them. (or an API that allows fans to build such a tool)

3. A proper compass HUD with not just North and South, but one that 360-degree bearings.

4. A mechanism to leave feedback when visiting another's base - be it text or simply a star-rating out of ten. 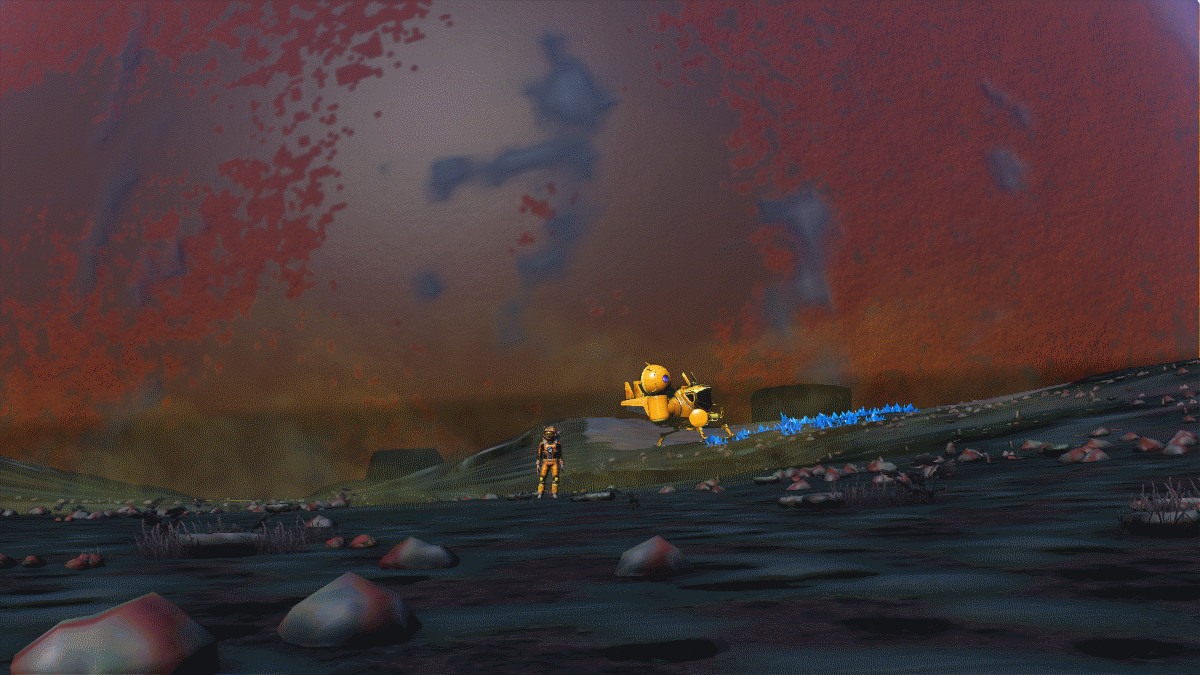 PiLhEaD said:
And I have a question - if you could choose three four changes to the game, what would they be? (Imagine HG are reading!)
Click to expand...

I have only one. Fork a realism-based high fidelity version called No Man's 'Verse and put Star Citizen out of its misery once and for all.

And yes, I'm more than half serious with this suggestion.

PiLhEaD said:
And I have a question - if you could choose three four changes to the game, what would they be? (Imagine HG are reading!)
Click to expand...

I have another request completely...the ability to transfer tech from ships and multitool as well as inventory items.

NMS is on sale right now, so I'm considering getting it on PC. It's still a bit on the high side ($30) for the amount of enjoyment I got from it on PS4, but perhaps the PC version is so much better that it's worth it. With this in mind, please answer the following:

If I think of anything else, I'll let you know

I've never tried it on PS4, but I'd say that draw distance and pop-in are still an issue on PC - you can adjust settings to help, but it's quite normal to have a tree suddenly rise up in front of you when flying low over the ground. I hear that 2.13 includes a raft of performance improvements, so this may allow yet more draw-distance in the settings. Others with more powerful GFX cards may have less of an issue - I have a 2Gb GTX 770.
I play on GoG and when visiting the <orb thing> there are always at least a few around - I can't say I've found them overly chatty, but then neither am I - but I've still had a few nice conversations with other 'anomalies' - there's also some inter-player bartering/gifting that goes on
Yes. I play with the reduced launch-fuel mod, which helps early days. It's very easy to mod. Unpack the files, put them in the GoG/Steam game directory and rename/delete the file called "DisableMods.txt ". There are plenty of mods out there, however each release can cause issues. On PC there is also a save-game editor, which can help avoid having to spend too much time collecting raw materials ( I find this disrupts my flow when mid-way through building a base).
I had a bad period a month or two back, but recently it seems much improved - make sure you disable any overlays (e.g. Discord, GoG overlay). I seem to be the odd one out around here, and most seem to have no problems. 2.13 comes with a raft of crash-fixes.
Never tried it. I stick to an x-box gamepad, it's not really a flight sim and it makes swapping between Kb+Mouse much easier. I have a Thrustmaster HOTAS for ED and have never considered using it for NMS.
There seems plenty to adjust - I'll grab a screen shot and post it here later. 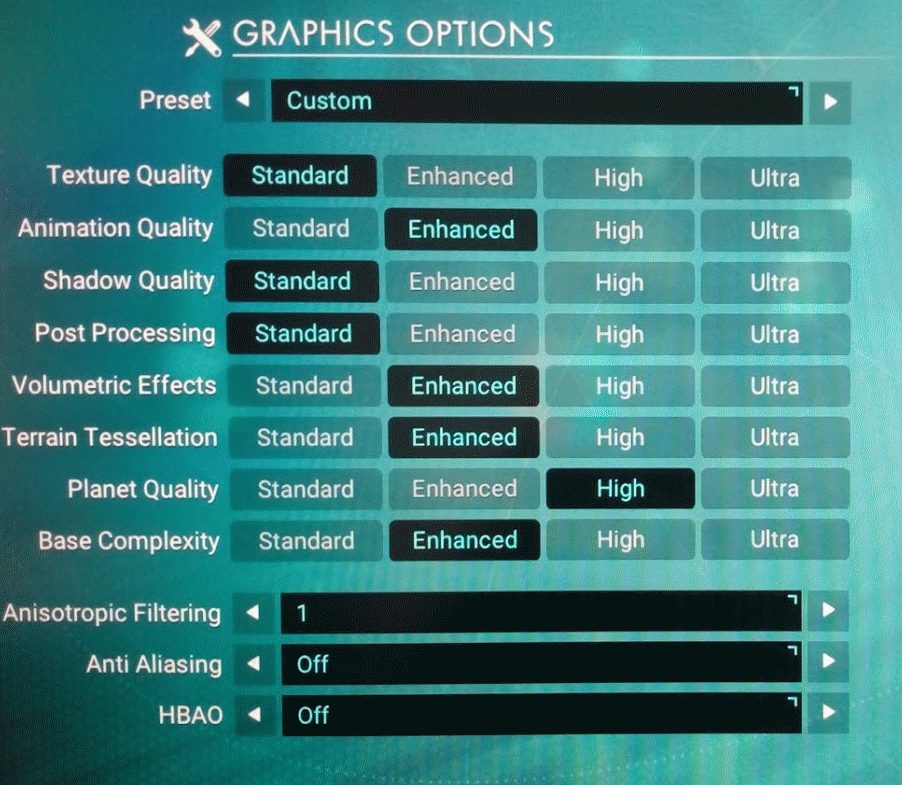 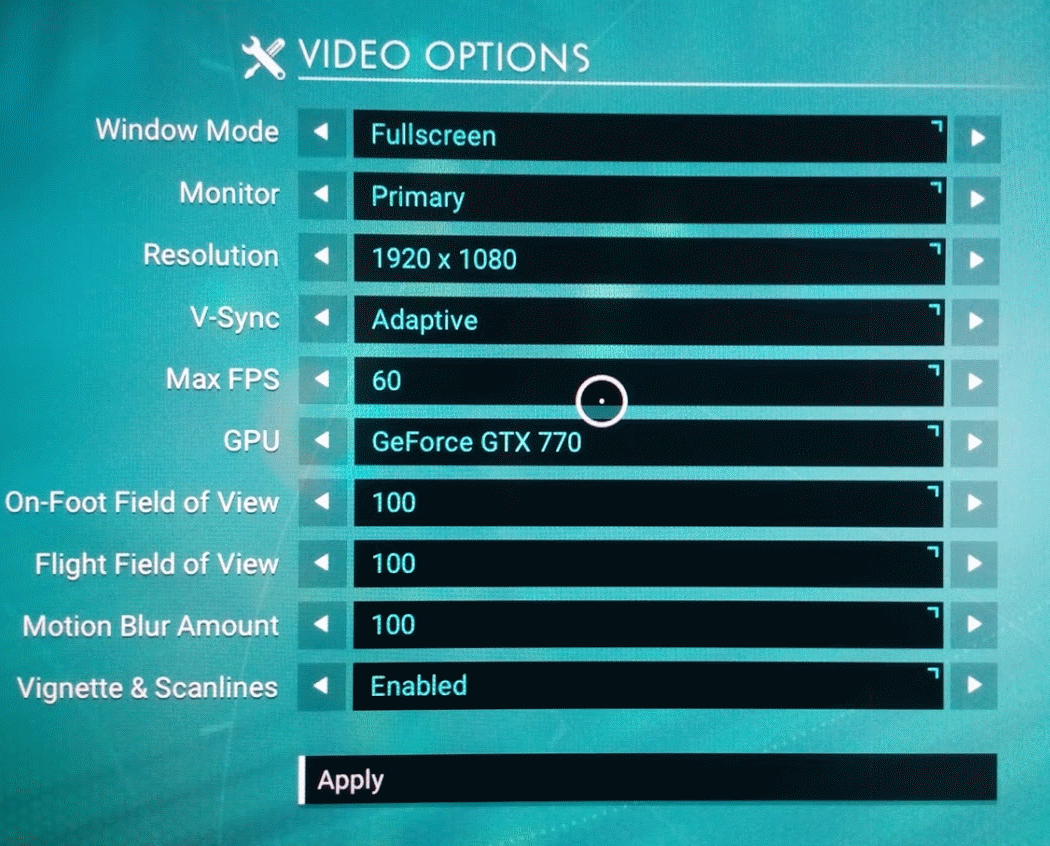 I've since moved planet quality up to ultra with little impact on performance and a decent improvement to draw distances etc - so it's worth trying.
Last edited: Oct 8, 2019

I concur with what PiLhEaD said, I've get pop up with a 6gb GTX1060 (just noticed the edit and I'l try ultra).

I don't get many crashes (although had one today, 1st for ages)

I don't use my Hotas.....360 gamepad and kb+M, I'm getting some weirdness where the game overrides the menus with pad control, not all the time though. quite frustrating as I only use the pad for the ship, I hate the pad in the menu!

I play solo in NMS, the nexus is how I like it, a ghost town!

I've used mods in the past, but currently vanilla as I keep on forgetting to download them.

Wish me luck....I'm 32,000 LY frm the centre with my Survival mode game, hopefully I'll pick up the 1st of the last 3 achievements I need. Although dpes anyone know what happens if you're closer to the centre than a black hole jump (I'm getting 6-7000 ly jumps from a black hole and I think I'll get to 4000ly from the centre. My ship can do 300ly jumps on it's own but I'd rather a final black hole to get me closer than 4000ly).

well colour me peeved, I'm still 12kly from the centre and so far TWO black holes have done nothing...just flew through them and out the other side in the same system. That means I have another 40 or so jumps.....oh well sup sup time for now.
Last edited: Oct 8, 2019

Your puny ship offends me!

(I'm channelling my inner Vy'keen. Good luck, happy trails, and may the odds be ever in your.... ...sorry wrong franchise...)

(I'm channelling my inner Vy'keen. Good luck, happy trails, and may the odds be ever in your.... ...sorry wrong franchise...)
Click to expand...

heh yeah I havn't really been "playing" the game on survival, just heading towards the centre slowly but surely, I'll get some more Hyperdrive upgrades then set course. Not looking forward to trying it permadeath though, it's been a bit of a slog mainly looking at the jump loading screens.

Well I did it with a few upgrades, was thrown when I coudn't just jump normally to the centre and could only do it from a specific system, it was an Emeril system so I had to install the hyperdrive update. TBH I was expecting a bit "more" when I got there, I knew it was an anti climax but it was worse than that!! I think HG should do a bit more, then I again I didn't do as part of the story just went there. Permadeath next, I think I'll follow the story for it this time.

flipping hell going from a quite advanced character to an early doors Permadeath character, with sod all dosh, equipment slots, upgrades etc is a bit of a PITA, almost died twice running out of jetpack juice...it's gone in what seems like a second!! I have to avoid deadly plants like the plague as well. It's a whole new game, currently farming salvage tech for money then I'll upgrade multitool, or ship whichever comes up with a better option (I can afford) sooner. Started Artemis questline as well. I don't have many 100% steam achevement games (subnautica, Skyrim (enhanced version, I must got off me butt and get the old version up to 100%!) and both trucking sims ETS2 and ATS) I'd like one more!

I used to see and chat to plenty of other players and it was nice to trade things. Has anyone else noticed the same?

E. Just popped to the GoG forum and it's a common complaint - so not just me!

PiLhEaD said:
I'm playing on GoG and since 2.13 and now 2.14 I'm not seeing ANY other players at the hub/Anomaly.

I used to see and chat to plenty of other players and it was nice to trade things. Has anyone else noticed the same?

E. Just popped to the GoG forum and it's a common complaint - so not just me!
Click to expand...

sewerratuk said:
Surely instancing at the hub/anomaly is not limited to launcher preference
Click to expand...

The GoG forum for NMS has a thread where all are saying the same thing, and saying that Steam forums report no such thing.

It's worth noting that multiplayer came late to GoG, and a while after Steam, so it seems completely plausible that a multiplayer issue unique to GoG has been introduced.

To assume that all launchers/infrastructures are the same is simply wrong - Steam has its own built-in multiplayer infrastructure, completely different to GoG (which as best I know doesn't have one at all).
Last edited: Oct 10, 2019

PiLhEaD said:
The GoG forum for NMS has a thread where all are saying the same thing, and saying that Steam forums report no such thing.

It's worth noting that multiplayer came late to GoG, and a while after Steam, so it seems completely plausible that a multiplayer issue unique to GoG has been introduced.

To assume that all launchers/infrastructures are the same is simply wrong - Steam has its own built-in multiplayer infrastructure, completely different to GoG (which as best I know doesn't have one at all).
Click to expand...

Fair enough. I would just assume the game would just hook up to the NMS server whatever the launcher. Never occurred to me that it would be akin to console

sewerratuk said:
...I would just assume the game would just hook up to the NMS server whatever the launcher....
Click to expand...

Not the case, or so it seems, but it's an interesting point - I'll have to ask next time I see another player but I'd guess we're segregated. On the plus side I'm guessing HG will sort it soon as it's such an obvious mishtyrk.
Last edited: Oct 11, 2019
You must log in or register to reply here.
Share:
Facebook Twitter Reddit WhatsApp Email Link
Top Bottom