Waypoint 14 is the point of departure to reach Beagle Point at the start of the Roncevaux Crossing. This route is named as such because it is the point at which a 25.8 LY range Cobra Mk III [The Roncevaux] successfully crossed the eastern edge of the Abyss into the outer galactic arm regions. At this location - more than 55,000ly from Sol - we will make camp for the night, repairing and preparing our ships for the long-haul out to Beagle Point. Qautheia BA-A E0 is also the system of our second deep-image scan of the galactic core. We have named this basecamp in honor of our fallen hero, John Glenn, who like Alan Shepard pushed the limits of human exploration. This basecamp features a remakable canyon with steep mountain cliffs and is our the last waypoint before the rigorous and final push to Beagle Point.

ATTENTION Shepard Cmdrs attending WP14 [Glenn's Passage]... Please note, the stretch to Beagle Point is long and hard, and we would like to travel together as a fleet as much as possible. There is not much need to mess around at this basecamp too long, as we have more than a week idle at Beagle Point. Therefore, WP14 meeting will be a short get together where we all catch up for about 20-30 min... at which point we wing up and begin the journey to Beagle. Please complete this short questionnaire about your availability at this meeting.https://goo.gl/forms/QWlh2BvsxDMlXQy13

@SHEPARD So the results are in for the meeting times today and every commander who responded with the exception of me is available at 20:00 UTC. However if any commander would prefer to depart at 02:00 UTC I will be at the basecamp then for departure. Those of you leaving at the first departure time please take photos and/or videos and share on Discord.

I'm actually abour 1000ly away from the waypoint, crossing the Roncevaux backwards. It would be nice to stumble upon a stream of explorers heading out... are you flying in Fleetcomm?

Landed around 23:30 IGT, both in open and in Fleetcomm, but no one was around. I was flying in open for the last 30 jumps. We fly private group and are on discord

Can do open though if anyone is around! Attention all Shepard Commanders - Basecamp 7 at Waypoint 17 is released: The S.H.E.P.A.R.D Mission of interstellar discovery is named in honor of Alan Shepard, the second human to enter space, and one of only twelve humans to land on the moon during the historic Apollo Missions. Our mission is to obtain scientific data - to observe, document, and collect three primary types of deep space measurements. There are 5 Legs of the SHEPARD Mission. At the completion of each Leg a report will be filed outlining the given scientific findings during each respective Leg. This report, Issue 1, covers Leg-1 of the SHEPARD Mission. See its own thread here: https://forums.frontier.co.uk/showt...s-Released-LEG-1-Elite-Exploration-Expedition

Hollalulah!!!! Episode3 of the SHEPARD Chronicles is now finally released!! In this Episode, Cmdr Parabolus broadcasts from the end of Leg 1, at their Basecamp near Waypoint 7, a brilliant purple nebula en route to the Scutum-Centaurus Arm. Parabolus discusses the Saga of the Elusive Red Giant [aka Little Red Riding Hood], GU Muscae, and some galactic anomalies near NGC 3199 Nebula. https://youtu.be/nll4JsuUeik

JAN 20, 3303
Bleethue AA-A H36 Nebula is one of the largest in a local cluster of seven nebulae in an area of the Outer Norma Arm known as the Boreas. The nebula is filed with remarkable red and blue gases, and is littered with over 30 Neutron Stars, a black hole, and a few Blue Giant stars. Located north of the galactic core, Boreas (Northern Wind) is a distinct white region bordered by the golden Eurus region to the east and the blue Zephyrus region to the west. Located centrally in Boreas is the Tristar Beacon, marking this region as the last safe shores for exploration vessels heading north with jump ranges below 30 LY. We will use this nebula as a basecamp to explore the region: Phroea Gree AA-A H34 Nebula Teqo AA-A H45 Nebula Phoi Bre AA-A H8 Nebula Phleedgoea AA-A H108 Nebula Scheau Byoe AA-A H187 Nebula Vegnue AA-A H17 Nebula 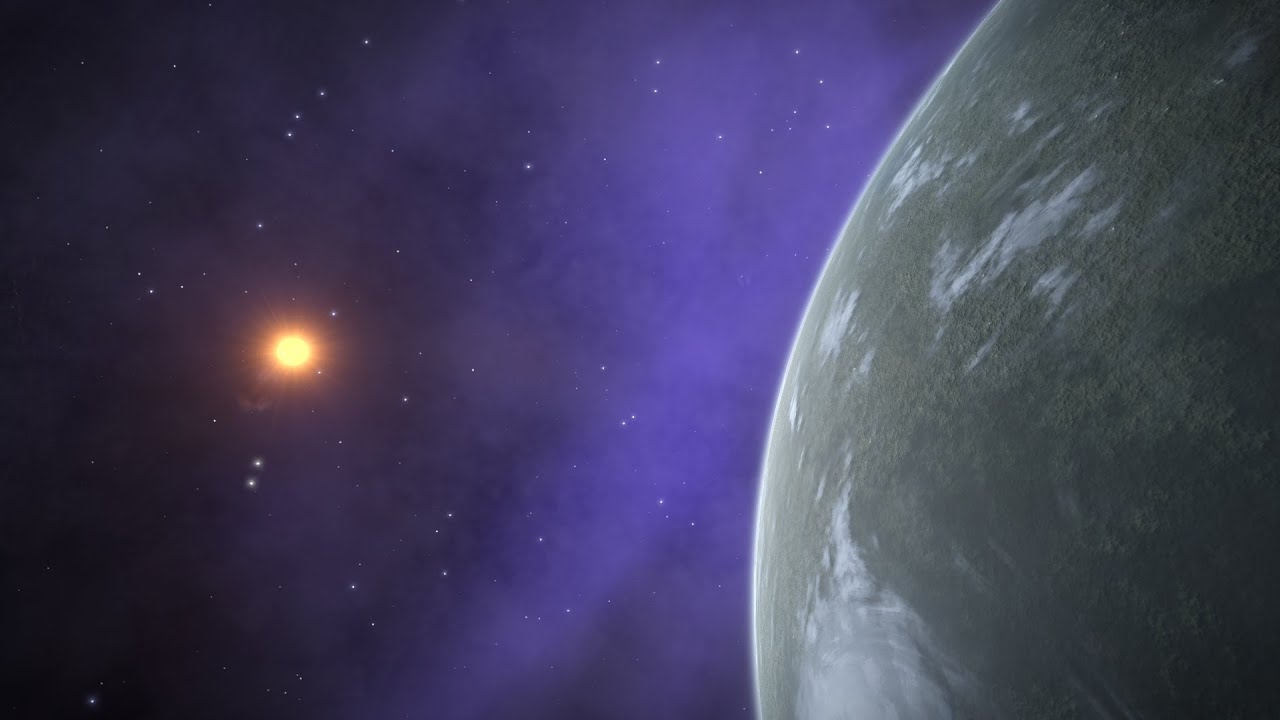 Named after recently decreased astronomer Vera Rubin, it is actually a small moon as part of binary moons orbiting a lava world, itself orbiting only 1000ls from a B-Class Subgiant star. The planet is low g (0.06) so for those of you brave enough, we are going to try to jump this canyon in our SRV... You may also note the planet is rich in jumponium materials for those of you looking to stock up after Beagle Point! Congratulations Shepard Commanders... In honor of our collective approach to Waypoint 20, and the basecamp named 'Taen's Hideaway', I am proud to announce the successful transmission of Episode 4 of the Shepard Chonicles - a video transmission from the Expedition Leader of the SHEPARD Mission. In this episode, Cmdr Parabolus broadcasts from the historic Roncevoux Crossing, 55,000ly from Sol. At their basecamp Glenn's Passage, Cmdr Parabolus transmits a video log capturing footage of various events along Leg-2 of the Scutum-Centaurus Arm. Parabolus discusses the two major Nebula along Leg-2, Hawkin's and Flying Flea, as well as two record breaking discoveries. Also included is exploration footage from the 'Eye of Horror' nebula and a newly discovered planet with an incredible thick semi-liquid atmosphere. The video concludes as cmdrs prepare to depart for Beagle Point....

Also, nearby there is a moderate gravity planet with jumponium materials: Phraa Byoe KZ-Y B58-0 1. For those of you in need of any jumponium, this is a great opportunity to stock up before the big climb to the galactic ceiling at WP 22. That being said, I'm really itching to get out of my Conda and go for a planetary stroll in my SRV. Hopefully there is a nice canyon on this planet and we have a race/drive down it... See you all tonight!!!

Congratulations! As of this Friday we will have officially reached Leg-4!!!!! Leg 4 of the Shepard Mission is a detailed reconnaissance and observation of massive planetary nebulas and supernova remnants near the galactic core. The gathered information will be collated with data collected from larger nebula in the region that have formed around the core. This leg of the mission will feature fifteen newly formed planetary nebula. In other words... we are in the CORE! Below you will find basecamp information - the first meeting is this Friday at 20:00UTC // Second Meeting is 02:00UTC.

Basecamp for Friday at WP 24 - titled simply 'The Junction'. Rose Nebula sits at the conflux between the galactic core and the Inner Persues Stem... and therefore marks the edge of the core for explorers travelling back from Beagle Point. Our leanding spot it sick as hell. Has a close orbitting moon and the parent Class 1 Jovian Gas Giant, as well as the perfect backdrop of the planetary nebula known as 'Rose Nebula'... also, nearby is a crater with an almost perfectly circular mound in the middle, as well as a canyon with dark oranges. Congratulations Shepard Cmdrs, today we have reached another milestone in the expedition: Waypoint 25. Not only are we a mere 12 waypoints from Completion of the Shepard Mission, we are now in the thick of Leg-4, the galactic core. Moreover, the Colonia Gazette sponsored by CCN, has just published their second article covering the science findings of the Shepard Mission. It is well written, and worth a read while out here in the black. Find article here:

The SHEPARD Mission will spend 10 days at this waypoint (with 2 optional waypoints nearby). SHEPARD cmdrs will collectively orbit the planet scanning and photographing its mountains, valleys, landmarks, ultimately designating and denoting regions on its surface. A route with various checkpoints will be organized, and cmdrs will race in the 6-hour endurance challenge competing for the ultimate honour [S.H.E.P.A.R.D. Surveyor I]. The winning cmdr will be allowed to name the planet and a custom SHEPARD Surveyor patch will be ordered with the Cmdr’s name included.

I am calling on all SHEPARD Cmdrs, even those who have finished the expedition or are currently repairing at Jaques, to please attend this event. Arrival at our basecamp is scheduled for this Tuesday March 7th during our usual times [20:00UTC // 02:00UTC]. The race will be scheduled a few days after arrival to allow cmdrs to scout difficult locations, map different regions along the planetary surface, and enjoy each others company. This form is used to determine an appropriate time for as many cmdrs to participate in the race. Details about how the race will work will be released soon, as well as the exact planet system and location. Please fill out your available times ASAP so that we may be able to race as a single group!

***NOTE*** The race will take approximately 6-8 hours... so please fill out only times you can be available the entire race.

Below is a form used to fill out available / preferred meet-up times for S.H.E.P.A.R.D. SRV Endurance Race at Waypoint 26 - the most anticipated and intense event scheduled for the SHEPARD Mission.