Synkreto said:
15 cases worldwide so far . Absolutely, people in he ifled(s) know which Variant(s) those people were/got infected with . I have not kept up last 10 days, so I do no know . Any of you have a good source on papers re. this ?
Click to expand...

I only saw information from AFP without details

Factabulous said:
I was listening to the (UK) radio this morning and they had a virologist on saying that the people he talks to in two different vaccine programmes were not expecting their vaccines to be ready before mid-2021 - a bit longer that I was expecting (though I guess still fast for normal vaccines). I wonder if more countries will start to try for Elimination (NZ/S.Korea) rather than Containment(Europe etc).
Click to expand...

Robin made an excellent post, idk how many pages ago, about the problem(s) with SARS-CoV-2 vaccines . Boiled down to -> while everyone is totally amazed at how fast it happened ( once it does ), we will need some time to find out the really important stuff . Like...years .

Factabulous said:
If the EU went for it maybe. Though I think probably that horse has bolted as the virus is everywhere by now.

I find it interesting that the UK doesn't seem to have even considered 'doing a NZ' and trying to get rid of all cases (surely easier for islands). I think we're a victim of positive thinking 'maybe this will all go away, and we'll have a vaccine soon' rather than 'let's get rid of this now'.
Click to expand...

Try being Germany and locking down your borders/airports . Or even implement strict quarantane rules - and enforce them - even for EUinternal Travel and Transport .

You wouldn't believe the sheer amount of goods travelling in heavy, rather fast moving metal boxes on wheels we see on our Autobahnen und Strassen every single day, everywhere .

Two staff members at a hospital in India who tested positive for the new coronavirus became reinfected several months later — and had no symptoms in either instance.
The hospital employees, a 25-year-old-man and a 28-year-old woman, worked in the COVID-19 ward. Both tested positive for SARS-CoV-2 in May, although neither had symptoms (V. Gupta et al. Clin. Inf. Dis. https://doi.org/d97d; 2020). After testing negative, they returned to work. Both tested positive again roughly three-and-a-half months after the first positive test. Neither had symptoms, but both had higher levels of virus than in May.
Genomic analysis by Vinod Scaria at the Institute of Genomics and Integrative Biology in New Delhi and his colleagues showed that the SARS-CoV-2 that infected the workers the second time was genetically different from the first virus that infected them — evidence that the workers were infected anew rather than harbouring leftover virus.
The results suggest that asymptomatic reinfections are often underreported, the authors say.
Click to expand...

This is from link one above.
In the health care worker group, humans are repeatedly reexposed to various variants of the virus, making reinfection a particular hazard for everybody.
If they catch each one, and we are processing people through their care, the hospital services worldwide could be factories of reinfection.

And nobody would know. Why would anybody be testing workers after they were already cured, tested negative, and had no symptoms months later?
Last edited: Oct 14, 2020

ianw said:
I wasn't suggesting NZ or Oz were draconian - though I do recall some police chief in Oz commenting on how some of his officers smashed a car window in and dragged the occupant out because they refused to show identification. I wouldn't exactly call that a softly softly approach ...

My point about NZ was that the situation as whole is really not comparable. I seem to recall this thread discussing the folly of trying to compare countries when it comes to this pandemic as everyone's situation is different in so many ways regarding health and general systems and culture.

ETA - regarding your 2nd para - I don't recall eradication being discussed as an option publicly. I seriously doubt they would have considered shutting all flights down and pulling up the drawbridge as it were. I think I recall hearing stuff about testing being no use once a certain threshold had been achieved though that may have been making a virtue of a necessity as in the early days our testing capacity was virtually non-existent. A bit like they were saying masks were no good for the general public mainly because we didn't have any.

Also it seems some WHO sources are now saying lockdowns should only be considered as a last resort.

Has the WHO backflipped on its own lockdown advice?

Comments from one of the World Health Organization's leading voices on COVID-19 raise the question of why governments have imposed lockdowns during the coronavirus pandemic.

Re. your last sentence : the "now" is kindof misleading . WHO has never said anything else. Right from the Start they stressed, continously, countless times, like a Mantra, how important max. possible containment is . The kept at this for weeks, even while they witnessed and had to comment at the colossal mistreatment of the Pandemic that started to develop in several countries, and stay positive about that . Their core messange did not change :

Robin of Spiritwood said:
First death from confirmed reinfection reported.
Highly atypical situation, in someone getting a bone marrow transplant.
Click to expand... 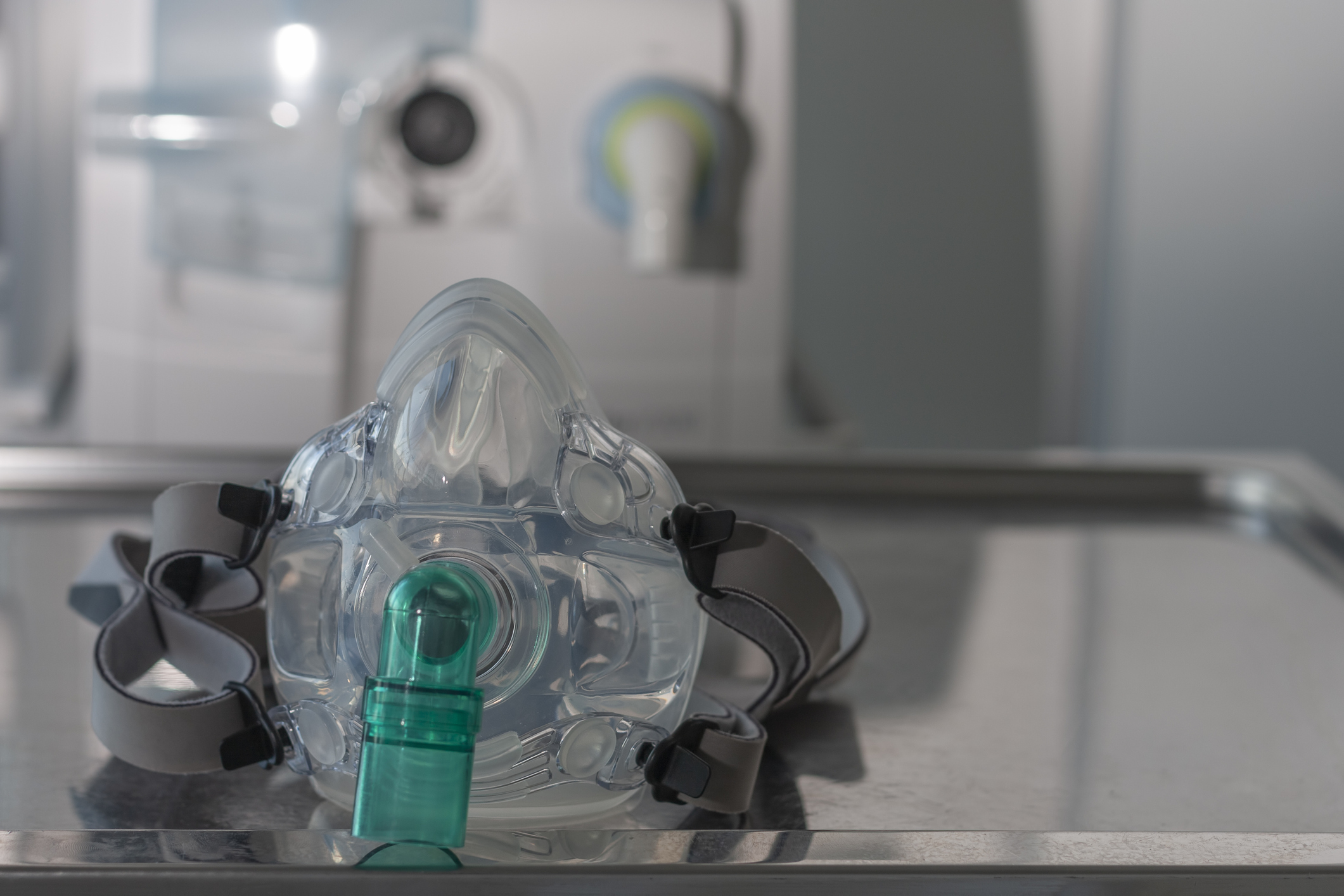 The report comes as the U.S. sees its first case of a person catching coronavirus twice.

It's everywhere in the general media. It means little as bone marrow transplant treatment causes deaths from infection from time to time- from practically anything.

Cmdr Nemo LXXI said:
The Covid debate is based on information taken from a large number of different sources, some have their own agenda and some don't. I mean just look at the difference between CNN and FOX. Both have realized that creating a concern, and a possible resolve can and will increase their ratings which increase their bottom line. Both have their own agenda which isn't reporting the news anymore, it's their bottom line. Only by viewing and listening to both can one really come up with a valid opinion. And even then, it doesn't make someone else incorrect in their beliefs in just what is or isn't reality.

I did get a second test done, an hour ago received the results. And again the results showed a false positive. If the data is based on a test and the test procedure isn't 100 accurate. Then the number's can be misconstrued and reported on as anyone's particular agenda wishes.

1. FOX - Fox self describes as a 'News Opinion' channel: the fact that it's not an objective source of news is clear and stated up front. Many muricans appear it think it is though.

2. multiple False positives? What kind of wittery is that? If it was a PCR test you have elements of viral RNA in you, wether you like that or not. You may have been asymptomatic but its incredibly unlikely that you don't have covid RNA in you. The refusal to 'beleive' in the results of science is another sad indictment on education. I presume you don't think the earth is flat?
Last edited by a moderator: Oct 14, 2020

There was isopropyl alcohol in the store, today. A full shelf. 50% price increase.

All the disinfectants were back. Some were generic, most were name-brand.

The emergency-type toilet paper was gone. Name brands were back.

I saw multiple contrails in the sky. It had been empty of traffic for so long.

Was someone looking at a particular calendar date?

Tony Green admits he fell into a “conspiracy trap” that led to the deaths of two members of his family. 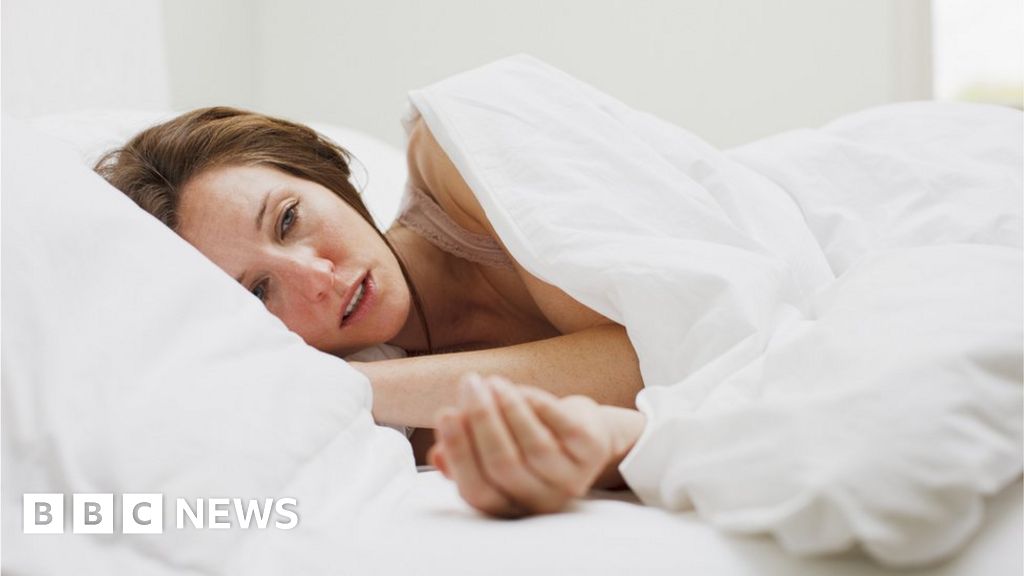 People with long-lasting effects of coronavirus infection are not being believed or treated, a review says.
www.bbc.com

French police have raided the homes of senior government and health officials as part of an investigation into their handling of the coronavirus pandemic.
Click to expand...

Health Minister Olivier Véran and the director of the national health agency, Jérôme Salomon, are among those whose properties were searched on Thursday.
The raids came after a court launched an inquiry earlier this year into the government's handling of the pandemic
Click to expand...

Perhaps many other countries could benefit from the same.

Perhaps many other countries could benefit from the same.
Click to expand...

The searches also concerned other people such as the former prime minister, the former health minister etc ...

About 20 million inhabitants in France will be subject to a curfew from 9 p.m. to 6 a.m. for a minimum of 4 weeks.

If followed, the recommendations in the Great Barrington Declaration would haphazardly and unnecessarily sacrifice lives. The declaration is not a strategy, it is a political statement. It ignores sound public health expertise. It preys on a frustrated populace. Instead of selling false hope that will predictably backfire, we must focus on how to manage this pandemic in a safe, responsible and equitable way.
The suggestions put forth by the Great Barrington Declaration are NOT based in science.
Click to expand...

The war against the infodemic continues.
If these guys had a petition, I'd sign that.

My main system just keeled over and died, so I'll probably be away for a bit till it gets new parts. It's high time for a SSHD.
So a look ahead: what will happen next?


Remember this old graphic? It's not scientific, it's just me with a fat paintbrush, copying the pattern. 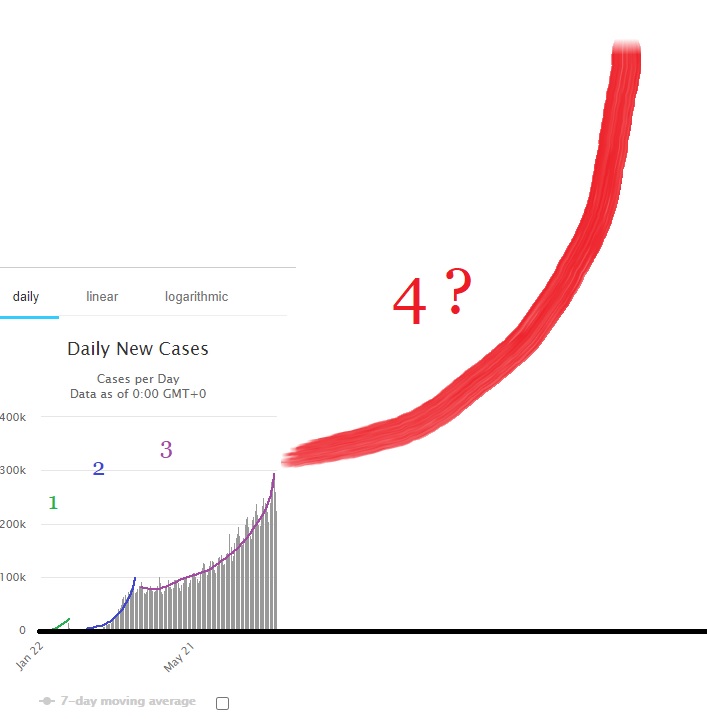 Let's compare it with what actually happenned: 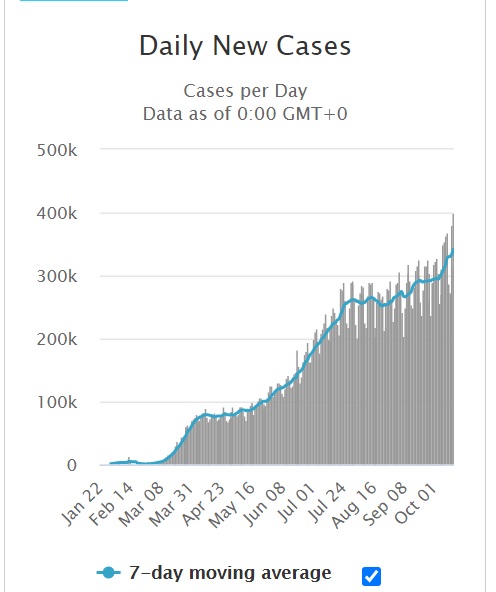 Here is where an expletive would not be unapropos.

The third phase lasted longer than estimated, which is bad enough by any stretch, but NOW it looks like phase 4 is starting up in the Northern Hemisphere.
This is one of those countless times when I wish the wild guessing I do was wrong. It probably is. Although not by much so far, based on the data.
But if any big country cough*India*cough implements the malignant craziness of the Great Barrington Declaration, that horror is the kind of curve we would see.

My little island lost control following elections.
I frankly dread the effect a mass turnout American election would have, when 1/3 of the voters think Qanon is real, and masks are a Socialist Plot to emasculate them. Europe is already winding up for a takeoff, and winter looms. 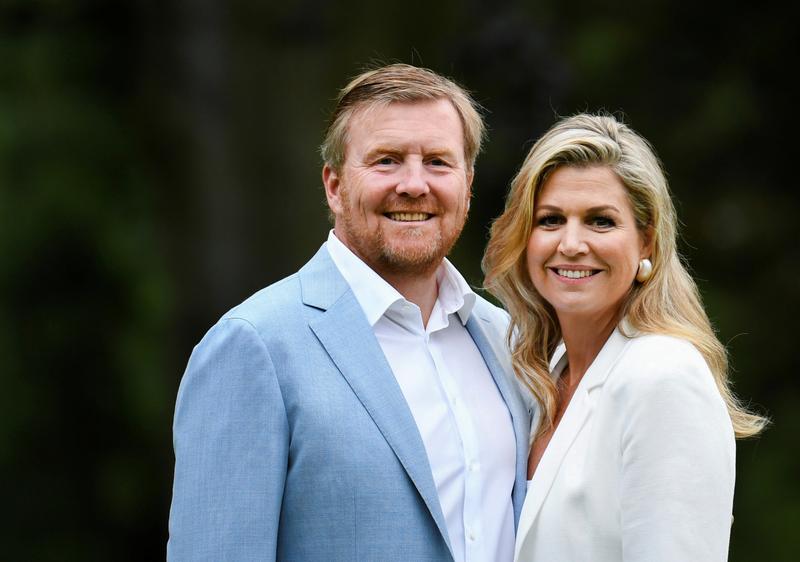 The Netherlands' King Willem-Alexander has gone to Greece for a vacation, Dutch press agency ANP reported on Friday, prompting criticism from several members of parliament for travelling during the coronavirus pandemic.

The Netherlands' King Willem-Alexander has gone to Greece for a vacation, Dutch press agency ANP reported on Friday, prompting criticism from several members of parliament for travelling during the coronavirus pandemic.

Could be worse. Could be Florida. 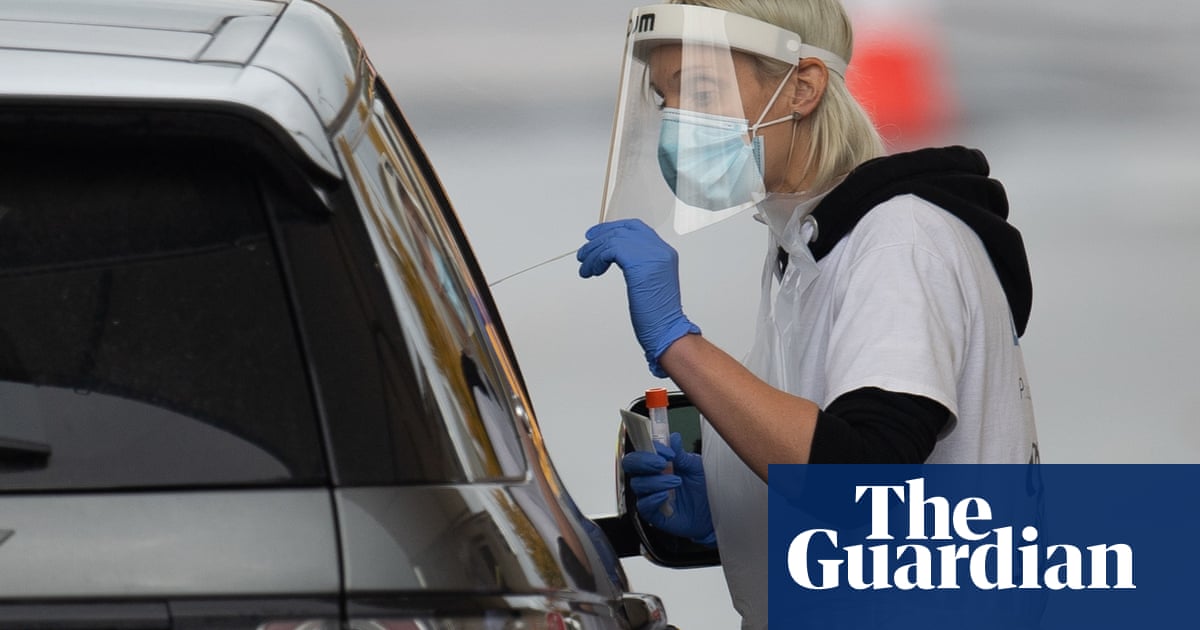