There and Back Again: Celebrating the DSSA and the Elite Dangerous Passport System, Part I

S
TLDR: Travel along with SpaceMeNow on the Spear of Bitter Mercy carrier on a visit to 35+ DSSA Carriers scattered across the Core/E/SE area of the galaxy over the course of ~4-5 months! Part I (details below) departs from Arikara on Sunday, 25 October 3306 and is scheduled to end at the DSSA Callisto for refueling + fun activities on ~17-18 December 3306. We will plan to depart the Callisto on 2 January 3307 for a return leg via the DSSA Carrier-rich galactic core (detailed schedule released later, predicted return to the Bubble in early/mid March 3307).

Communication between me and any passengers will happen on my Carrier’s discord channel: https://discord.gg/YMxR8jw (be civil and friendly).

All aboard for a relaxed Grand Tour of nearly 3 dozen DSSA Carriers (with many more fairly close to our flight path!) SpaceMeNow is pleased to announce the itinerary of the “outward” leg of the There and Back Again DSSA tour, celebrating the EDPS, Elite Dangerous Passport System. CMDRs are welcome to join the friendly crew of the Spear of Bitter Mercy as we celebrate the establishment of DSSA outposts in the Core/”East/Southeast” region of the Milky Way. A small but friendly group of CMDRs is just finishing a ~97,000 LY journey with SpaceMeNow and the Spear and we are very hopeful to pick up a strong crew for this much longer and more ambitious journey.

Do you want to just ride along and visit/explore/chill over the weeks/months? Are you a new CMDR, a grizzled veteran, or anywhere in between? You are welcome!

Do you want to come along and provide occasional Tritium mining support? You are welcome! The recent discovery that 1 ton of Tritium can propel a Carrier 4 LY has massively reduced the mining requirements to keep a Carrier moving, but mining support will be occasionally needed especially at DSSA Callisto for a full refuel. The more mining support we can have along the journey, the less we will need to mine at Callisto. The Spear will be buying Tritium at a rate of 50,000 CR/ton when needed for the entire journey’s length including the initial fueling (buying at a rate of 65000 CR/ton) during the week of 18-24 Oct. 3306. (Location announced soon) Donations to the Tritium depot during the trip are of course always appreciated too : ) Subsurface mining is by far the fastest way to rake in the Tritium at the moment with my average rate being 180 Tons/hr in my Python in a single Trit hotspot.

Do you want to come along mainly to get cool EDPS badges for visiting far-flung DSSA Carriers? Join us! You do NOT need a high LY range ship to join as we will be visiting the actual systems of all DSSA Carriers listed in the route below. You may want to bring an “exploration” ship to visit nearby DSSA Carriers to one or more parking locations.

Detailed schedule (any deviations to be clearly announced on Discord):

Where we will mine/party hopefully with many dedicated Callisto crew members possibly including the current leader of the DSSA Initiative, Gnauty!

The crew of the DSSA Gene Roddenberry are looking forward to your visit on 13 Dec. If it's not to much trouble, bring us a case of Lavian Brandy? There is a double Tritium hotspot nearby, I'll post the system Monday when I'm home. I think I currently have about 5k of tritium on board if you need it, or I can set a buy order at 50k/ton if you want to be productive while you're there so other carriers might benefit.

Looking forward to the visit! Keep me updated.

S
Much appreciated! We will just keep in touch as we near your position. I certainly would be more interested in buying Tritium (I'm sure I'll be a tad burnt out with mining but that's the traveling Carrier life) but of course if you have other Carriers come through in the mean time sell what you can to them : ) We are looking forward to the visit!

The DSSA Kraut is stocked up with Tritium aswell and its crew is looking forward to your visit!
Feel welcome to contact me for a special offer before a potential purchase. 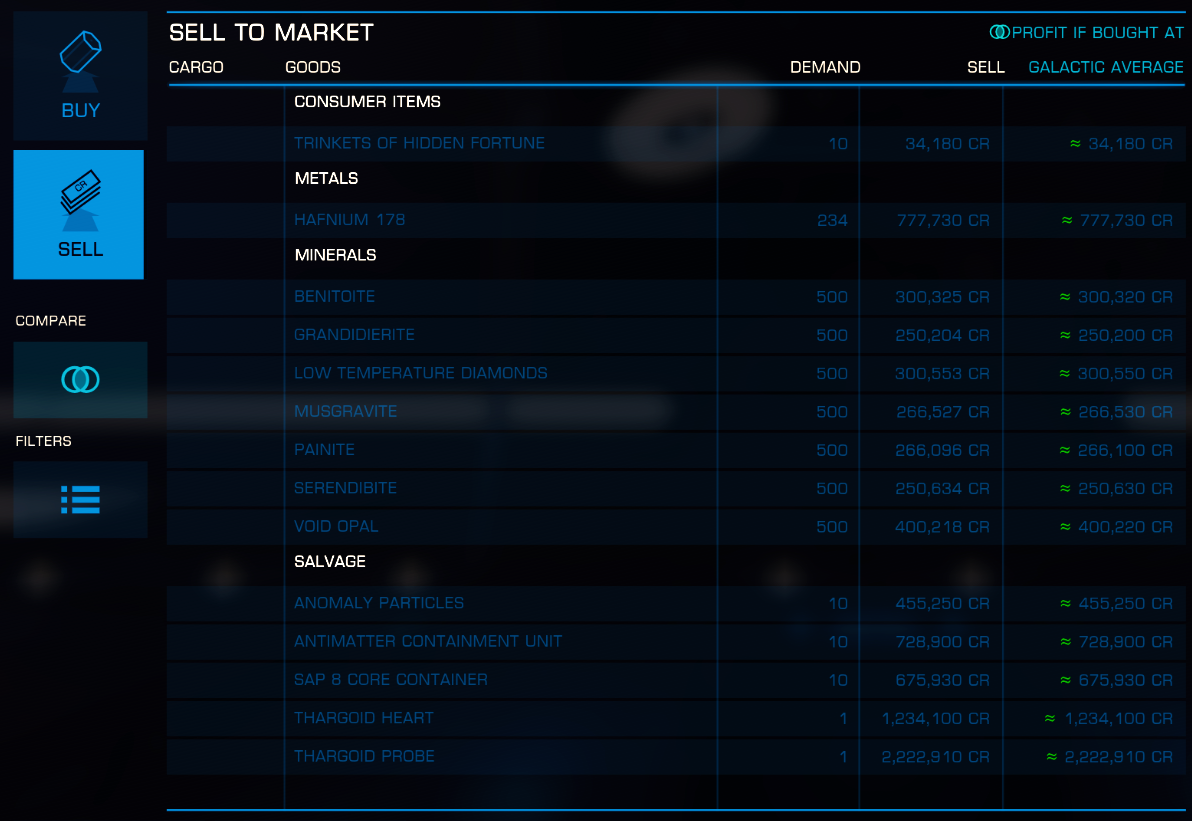 S
Return leg of the trip: