This is (possibly) the Biggest and most Substantial find in the History of Elite's Raxxla Search.

Hello friends. It's me, Arburich, back at you with some more tinfoil

Don those tinfoil hats, prepare your popcorn, and maybe take a seat. Today, we've found direct quotations that are matched in game with the Dark Wheel's Toast with an old occultist novel / religion called "religion of Thelema".

Yes, I know, sounds ing crazy right? Why the hell would Frontier, or I guess David Braben, be quoting occultist texts and design an entire "artifact" (raxxla) around what is essentially an occult religious text? You're guess is as good as mine, but I'm here to give you these quotes directly, show you what I've found, and possibly give you more insight as to what I think I found.

As for sources, here is the full "religious text" of what we are finding quotes from. As well as the second text from the Crowley

What is this Liber book thing?
From Wiki:

Liber AL vel Legis ([ˈlɪbɛr aː.ɛɫ wɛl‿ˈleːgɪs]), commonly known as The Book of the Law, is the central sacred text of Thelema, allegedly written down from dictation mostly by Aleister Crowley, although his wife Rose Edith Crowley is also known to have written two phrases into the manuscript of the Book after its dictation. Crowley claimed it was dictated to him by a preternatural being calling himself Aiwass, but the three chapters are largely written in the first person by the Thelemic deities Nuit, Hadit, and Ra-Hoor-Khuit respectively.

The book contains three chapters, each of which was alleged to be written down in one hour, beginning at noon, on 8 April, 9 April, and 10 April in Cairo, Egypt, in the year 1904.

The book is often referred to simply as Liber AL, Liber Legis or just AL, though technically the latter two refer only to the manuscript.
Click to expand...

NOTE: I am not here to discuss religious pretext, connotation, or argue about religion. Aleister Crowley, and this book, are widely regarded as occultist texts, meaning that you should take what I'm saying here with a grain of salt. Yes, We've found substantial evidence pointing to the fact that a lot of known Raxxla theories are almost directly intertwined with this guy's stuff, but that doesn't mean that FDEV are a religious cult or anything stupid like that. You have common sense, so lets not start a literal witchhunt or something stupid please.

To the jewel that burns on the brow of the mother of galaxies! To the whisperer in witchspace, the siren of the deepest void! The parent's grief, the lover's woe, and the yearning of our vagabond hearts. To Raxxla!
Click to expand...

Now, here's a few direct quotes from that occultist book I mentioned earlier:

In complex, sort of occultist terms, that passage is referring to the world serpent of illumination that allows the magical initiate to perceive and understand the otherwise imperceptible. Hell if I know what that really means, but in the terms of the Elite universe, think of this passage like, a call to arms. In relation to say, Salome's last message, we pilots are unwittingly doing the work of "The Club". This is basically saying, open your damn eyes Pilots Federation. Maybe. It could also be a deeper meaning in terms of hints for those with the eyes to see, but it is undisputed that part of the Dark Wheel's toast is directly quoted here.
Click to expand...

Page 88: #7 - ". Deeper sinks the thoughtless mind. The point is like a little star on the tip of a penpoint. Yet that star is the Mother of galaxies."

The entirety of this book is one long summary in how to birth a cosmic ship to traverse galaxies. Tell me again, but isn't one of the biggest founding theories of Raxxla that it is a rift to other galaxies? Possibly Andromeda, but possibly witchspace? I dunno, but two quotes in one is pretty crazy. To say that the "Mother of galaxies" is not a common quote would be true, but alone it wouldn't really signify a lot. But the fact that this quote AND to "burn upon their brows" are found in the same text, a text that exemplifies space travel, galactic wormholes, and many other space related things, is just on-ing-par with Raxxla.
Click to expand...

Page 77:: "Thus does the Wheel revolve, ever and anon, and ne’er does it stop. No, never! All wise men have known of this since time immemorial, and, yes, Time has always been capable of producing wise men."

Page 89: : "Falling, falling, falling, art thou — through the uttermost edge of the revolving wheels of systems. Yet this edge is the one great central column, the ladder to Eternity"

Page 99: - "The twenty-two major arcana of the Tarot, symbols from Western Pagan and Hermetic traditions, are attributed to the 22 Hebrew-lettered paths of the Tree of Life. The ten sephiroth represent archetypal ideas associated with the Indo-Arabic numbers from one to ten. The 32 different symbols together represent a wheel. The Latin word for wheel is Rota. TAROT is ROTAROTA, equivalent to the Wheel of Samsara. Both Tarot and Samsara represent the cycles of birth, procreation and death — the cycles of nature."

The following quotes are everything I could find in relation to a "wheel". Things like, the wheels of systems leading to a ladder to Eternity (Raxxla), or the fact that the religious occult texts are based on a representation of a wheel made out of Tarot, or in the finale, the axle of the wheel. This bits a lot more... how you say... Shaky when it comes to direct quotation, but still, it fits the theme!
Click to expand...

Aleister also wrote a huuuuuuuge second text that quotes a lot of dark wheel themes and such, but we'll get to that next.
Click to expand...

Speaking of Themes, here are some odd coincidences between the "Dark Wheel / Raxxla" theories, and the subtext / summaries of this book.

1. Raxxla is a gateway to another galaxy- Liber depicts the goal of it is to apparently manifest some manner of astral projection sentient machine to travel out of our galaxy into a different one. (Sounds a lot like Holo-me's aint it?)

2. Guardians exist in the world, and could hold keys to more secrets we know nothing about. - "Living computers" that are eerily similar to Guardians, but could just be a well-lived trope.

3. "Turn the wheel" is a phrase muttered by dark wheel fanatics and many others alike, - The second book "Thoth": “It seems that this wheel is being spun by a hand. Though the wheel fills the whole Aire, yet the hand is much bigger than the wheel. And though this vision is so great and splendid, yet there is no seriousness with it, or solemnity. It seems that the hand is spinning the wheel merely for pleasure-it would be better to say amusement."

4. The Dark Wheel's Official Logo depicting a snake surrounding a brilliant white wheel - The second book again : "“Now I see the figures on the wheel, which have been interpreted as the sworded Sphinx, Hermanubis and Typhon. And that is wrong. The rim of the wheel is a vivid emerald snake; in the centre of the wheel is a scarlet heart; and, impossible to explain as it is, the scarlet of the heart and the green of the snake are yet more vivid than the blinding white brilliance of the wheel." I've been told this logo is that of the "children of the dark wheel", not the official logo. Crossed out!

5. Elite dangerous is about space travel - The entire book is one big theme of space travel. Short coincidence, but one none the less.

6. "the idea of mating with, or becoming one with, Nuit is the primary concern of the book. the way it's phrased with one of the levels of allegory speaks explicitly of space travel. one of the biggest themes and goals of thelemic enlightenment is the ability to "cross the abyss" - Both the Abyss, and The Veils, are sectors in the elite dangerous universe. (Veils in the next point)

7. salome is also a character that is present in thelemic mythology, she serves an identical role to that of Babalon, the mother of the ship to leave the galaxy, and salome is a member of the dark wheel. She (in Liber) is knows for doing a dance called the "dance of the seven veils" which was so beautiful it caused the king to let her have anything she asked for. she chose to cut off the head of john the baptist. Her clipper (elite) was called the "seven veils".

I just think these coincidences are kinda, weird. And eerily similar to things found both in game and in lore. Maybe its a key, maybe its not. I really can't tell just yet. But as always, I pass along every idea I have to the community.

Big, huge, outstandingly massive thank you to Malcom A. Clypse, AKA. Mad Mal, for helping me decipher many of the things described here. I just found the book, but he graciously helped me figure out what in the frick I was looking at.

Edits on posts are broken, but ignore #4 about the Dark Wheel Logo, seems that I mistook a player faction's logo for something official!

I just returned from the shops empty handed. All of the tin foil had sold out.

Seriously though, when you start by saying "we've found direct quotations that are matched in game" and then your very first example cites "Burn upon their brows" vs "burns on the brow" - not even the same, and then follow up with a three word combo "Mother of galaxies" - as if such a short phrase is somehow impossible to see repeated elsewhere...

However, in the context of the game, I fully support such endeavors! Good luck, commander!

Arburich said:
Why the hell would Frontier, or I guess David Braben, be quoting occultist texts....
Click to expand...

Why not? Do you actually know what occulist means, or are you a religionist?

No, they are probably more aware of other philosophies/thoughts/intellect that affect our world outlook.
Raxxla? Happy hunting.

Would've been better posted in the 'The Quest to Find Raxxla' thread.

Interesting read. I’m not confident in the verbiage linkage especially due to sentence formation. That said I’m interested in exactly how these texts came to your attention and how they were originally linked to the lore when revising them.

So nothing has been found in game, right? 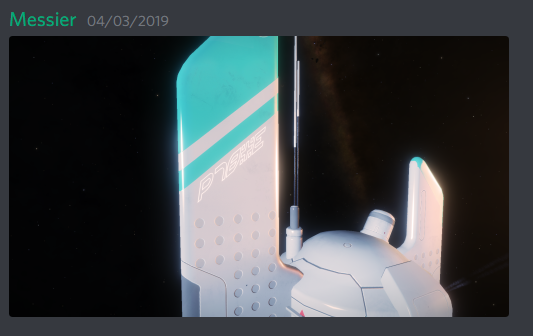 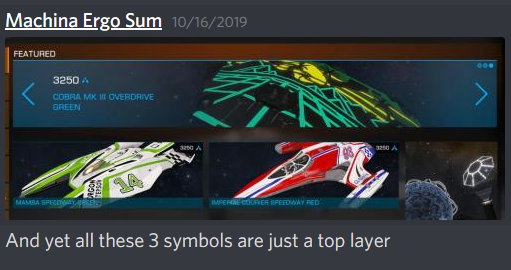 Machina ergo, knows alot, and I mean alot about this subject.

Mapu51Dan said:
Machina ergo, knows alot, and I mean alot about this subject.
Click to expand...

Pfft you overestimate me. After our convo, I think I have more doubts. I will try again in 6 months.