I've been away from the Bubble since DW2 started. After reaching BP during DW2 I took a solid 6 months off. When I returned I joined the 'Longer Route Home' expedition to navigate the eastern section of the galaxy on the way back home.

About half-way back I developed a new goal: Reach Arm's End. This system is on the far edge of the Perseus Arm, and requires a few thousand light-years of manual jumps with FSD injections. It's arguably one of the hardest places in the game to reach, if you exclude one-way locations and extremes of vertical distances. To make it more complicated, I was on the wrong side of the Perseus Arm. I could either go an additional 20k ly west, circle around, and back east; or cross the inter-arm gap. I chose the gap crossing.

The project got a boost when I discovered Gap Jumper, an exceptional tool that uses the EDSM database to find a least-cost path through sparse areas, where "least cost" means "fewest FSD injections" and not "fewest jumps". This is good. The tool has since gained a GUI, but the old way uses python and a long command lines, but it works great. The results got dumped into a spreadsheet I used for tracking the manual crossings. The one below just shows the arm crossing part. 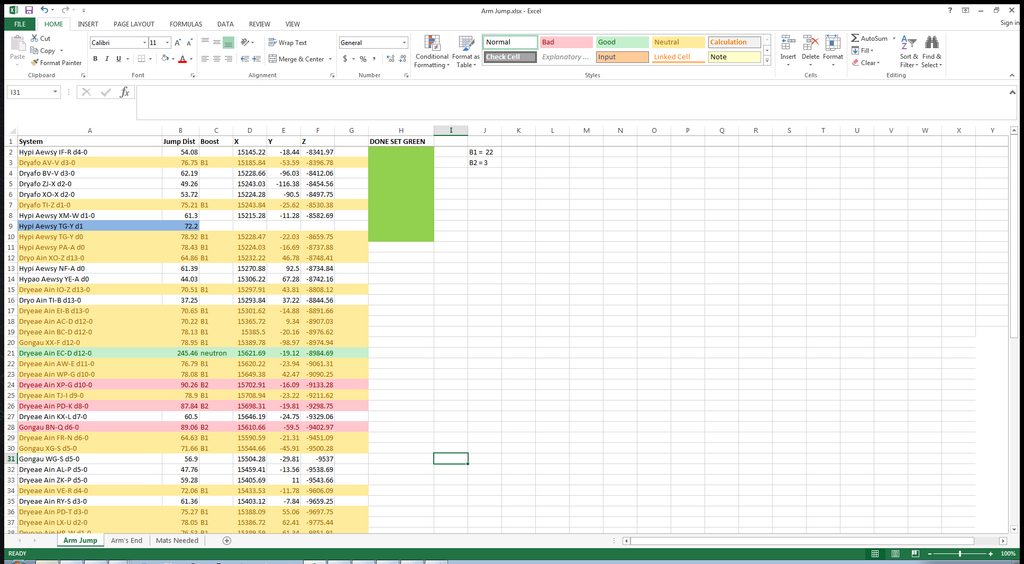 To add to this fun, I decided to take a longer "northern" route to get to Arm's End - more manual jumping, but less traveled. I would regret this shortly.

Once I had my total number of needed jumponium, I started farming materials. I won't go into that except to say that even with a place with really great drop rates it took me over 20 hours to collect the materials I needed: 155 Vanadium, 163 Germanium, 163 Carbon, 35 Cadmium, 43 Niobium, 5 Arsenic, 8 Yttrium and 8 Polonium. This gave me: 120 J1, 35 J2, and 8 J3. I already had some of these, but still, it was tedious.

After that pain the inner-arm crossing was fairly easy, only 40 manual jumps. Some of them required careful fuel management as you needed to be "on fumes" for the jump.

The crossing out to Arm's End took much, much longer, spread over a week and approx 100 manual jumps; plus detours to check out unexplored systems. Two photos because I lost the map-in-progress after a while. 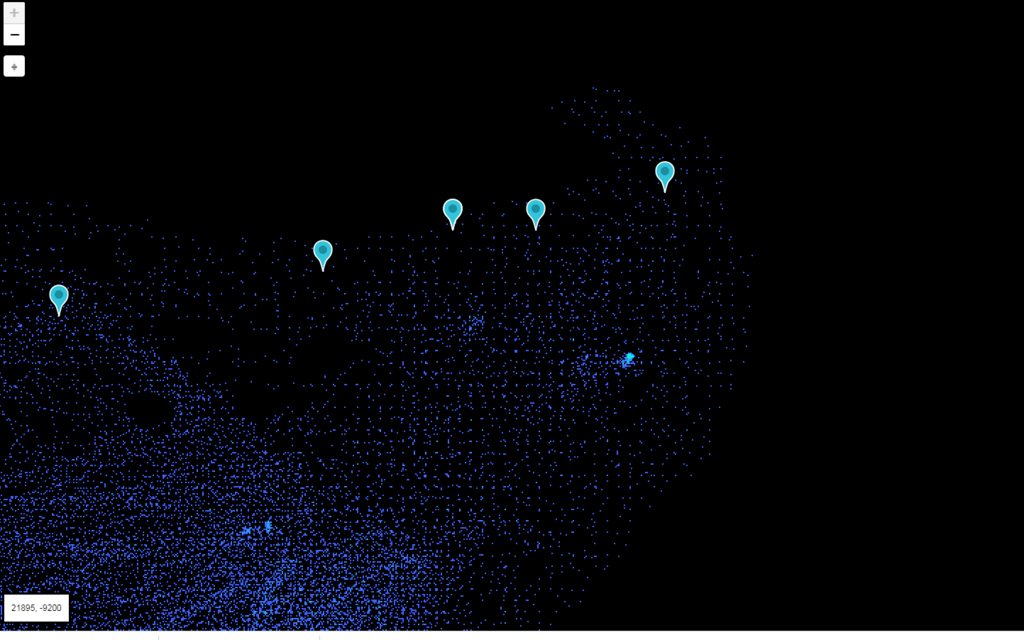 I arrived in Arm's End on 15-02-3306. Unknown to me, an expedition had set out for here, and so suddenly the system is swarming with people - quite a surprise! I missed actually seeing any other commanders in the flesh, however.

From here, I make a quick trip up to the most "inside" of the hook, then down to an old POI called Lone Runner for possible photos. Then, finally, I can start heading home. 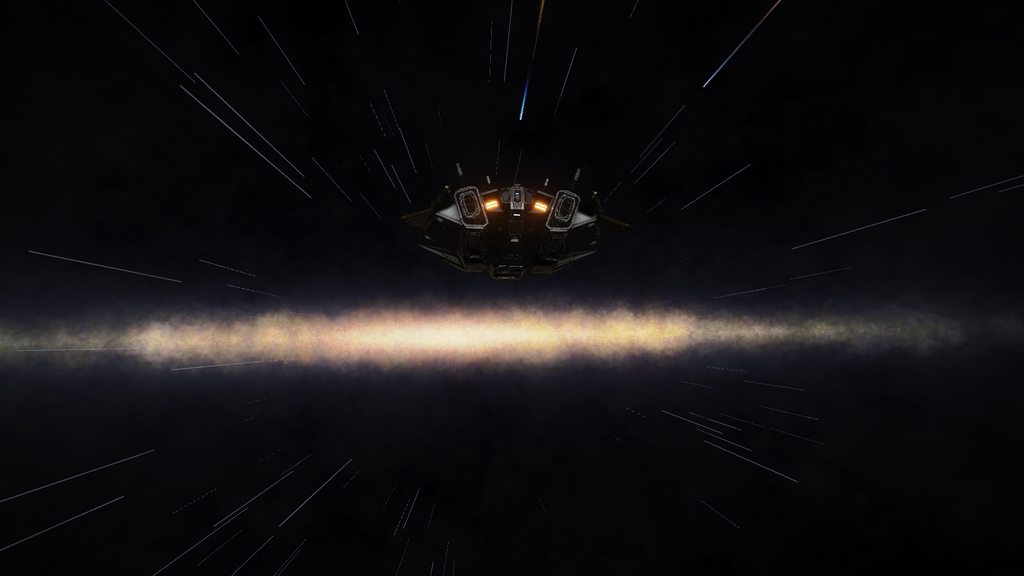 The DECE had a waypoint there, it was a lot of fun to travel about 3,000 Ly with FSD injections and manual plottings (the route plotter only plots for a single boosted jump).

This is the kind of trips I like most.

Hi ! The expedition currently there is the Winter Australis Expedition. The Arm's End waypoint was last week, we departed Sunday evening to slowly crawl back to the Bubble through Sepositus Beacon, Amundsen's Star and Shackleton's Star.
Definitely not for short-jumpers !

S
Are any PS4 pilots attending? I'm in that region, too (close to Amundsen's star).

Jethro49 said:
Hi ! The expedition currently there is the Winter Australis Expedition. The Arm's End waypoint was last week, we departed Sunday evening to slowly crawl back to the Bubble through Sepositus Beacon, Amundsen's Star and Shackleton's Star.
Definitely not for short-jumpers !
Click to expand...

Looks like I'll keep running into you guys! any chance I can join the expedtion?

Oh yes, no problem to join us.
On PS4, on the other hand, I only know of one explorer who has already completed the expedition and who left us some nice stories and pictures.

On our side we crossed the Perseus Fade through which Heavy Johnson passed, then we reached Arm's End through some nice Gyre Trees (Waypoint #5 Jongoae SX-L d7-0). We made a little detour to Sepositus Beacon and we meet again this week-end at waypoint #7 Eol Hypa GE-E d13-2 for the weekly massjump.
If you want to join us, here are all the infos :
The expedition is done on the DSN private group (the request is simply made in game and on Discord).
We are mainly French explorers, but we have a few English speakers following us and we have dedicated channels on our Discord.

By the way, I intend to submit the system of this week end (Eol Hypa GE-E d13-2) soon to the GMP because during the reconnaissance I found there a moon close to a big fast moving ring which when the light lends itself to it gives us a very beautiful spectacle. I still have to find inspiration for the name and a description.

I think it's never too late to register on the expedition page on EDSM if it is not finished (you can eventually ping Anthor if not possible)
You are still welcome to join us at our massjump on Sunday evening at Eol Hypa GE-E d13-2 (DSN Private Group)
Last edited: Feb 22, 2020

This week we are going from Lyed KX-A c27-0 (Shackleton's Star) to Aidohs JI-A d14-0 (The Aidohs Platforms) near 3 Geminorum and next week will be our last one and we’ll heading to Crab Nebula.

Nozdus said:
This week we are going from Lyed KX-A c27-0 (Shackleton's Star) to Aidohs JI-A d14-0 (The Aidohs Platforms) near 3 Geminorum and next week will be our last one and we’ll heading to Crab Nebula.
Click to expand...

Nozdus said:
This week we are going from Lyed KX-A c27-0 (Shackleton's Star) to Aidohs JI-A d14-0 (The Aidohs Platforms) near 3 Geminorum and next week will be our last one and we’ll heading to Crab Nebula.
Click to expand...

I've been caught up with school. I just left 3 Gem in a directly vaguely toward the Crab Nebula. 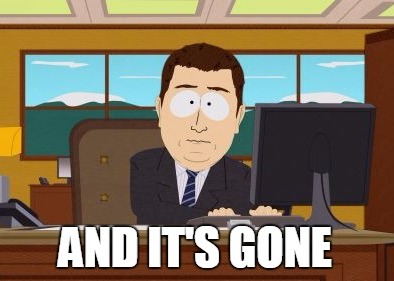