Ah ok, interesting, I have read the book, but my memory sucks .

I always assumed that bill's asteroid base had a sort phase cloak (the flash does not seem to match with existing fsd tech, or the tech cap ships use. It may be some new fsd tech bill or the club have come up with, but it is far from being certain.). If i am remembering correctly it was running cold, and only showed up as an asteroid (not an asteroid base).

Or it was a blast from a detonation (strongly implied by the book) & it took out the Imperial ships, & he somehow escaped just before hand.

Good luck, my friends,’ Bill’s voice said. It was oddly composed. ‘Got a last
little surprise for our Imperial friends …’
‘Bill, wait …’ Salomé replied, but the connection had already dropped.
A blast of light blistered out around them. The remote camera systems
showed nothing but an intense glare, a wall of whiteness. All four ships were
buffeted by an expanding sphere of detonation, superheated plasma raging
past at an incomprehensible speed.

On a potentially related note. Abba is apparently having or had a reunion tour. Some of the singers will be singing from home with holograms?! Did we get holograms in the salome events?

They also had a virtual reality tour in 2016. Was there any overlap to the salome event? 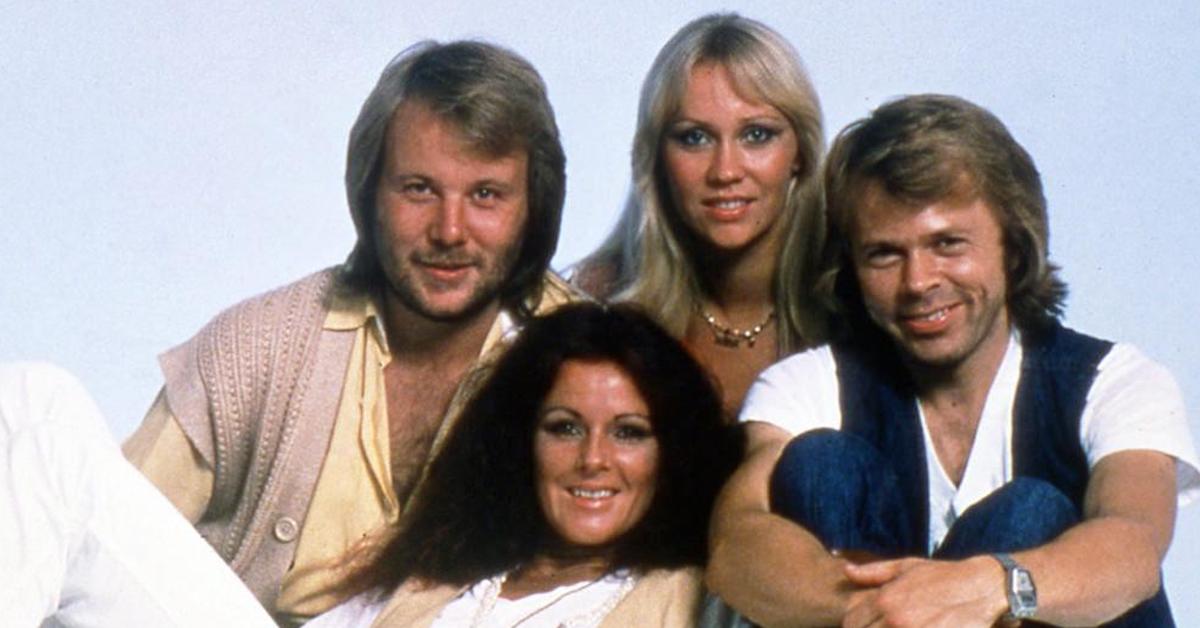 Plenty of classic rock bands have reunited over the years, so why not one of the world's most successful pop bands decades later?

Lol, aren't you taking the Abba 'connection' a little too seriously?

I thought the hologram thing was kind of interesting sounding though.

Although I do have this general thought that all music and media from that era was involved in cold war espionage and potentially contains hidden messages. And I always wonder if the imagery in videos from then have similar themes to games that would correlate. Possibly indirectly and not necessarily related to espionage.
Last edited: Aug 24, 2019

First of all, congratulations on solving this — you guys are way more intelligent than I’ll ever be!

Now, just as a quick reminder: don’t miss on the opportunity to go back and re-read the few posta thay mach10 left unedited before he makes them go away. Just in case you’re not sure about the veracity of his claims, or what happened after the “2-week-cyber-attack” event.

His actions were very bizzare. He was barely bashed at all(very lightly in fact, espeically by internet standards), and he refused to simply show drew the proof behind doors where nobody could see and drew could confirm without telling anyone. Nothing he did made any sense.

He made himself seem as suspicious as possible. Anyone in a game like this should understand how remote communication and the internet work. You need to proof your claim or nobody else can know. And such actions are naturally rife with potential concete. That is how a person faking something acts every time on the internet. He sort of overwhelmingly bread the reaction to himself. So, the natural reaction is massive distrust. It was completely appropriate to how he was acting. He shouldn't have been upset at all. He should have been expecting it. Especially if he works in something like cyber security. That or we need to start getting more seasoned people in those areas again. This is internet 101. Those things do matter. It's a basic undrstanding of the medium and how it's realities work differently from face to face communications. They are not jokes. That is why they are emphasized. If people don't understand that that is 100% reason to assume the extremes by nature. It's also the only way to get info to confirm which way it is. He bailed. No confirmation no trust. Especially when all the little bells start going off as warnings. If you don't understand a medium it displays a lack of reason to trust proper reasoning skills and hence the normal internet reaction. It's not just childish play. He could have easily reversed the opinion in many ways.

As an example. Lets say he was on the right track. He still could not know how to do it and simply have randomly come across that method in a goodl search. It easily fits the nature of a puzzle. So, the idea he was trying to get others to solve it so he can claim the idea afterwords is still very much a reality. Nothing indicated he had gotten the clue or was every close of actually going to or did figure it out. Everything he did screamed he was faking it and made everyone extremely overcautious. He made that with his own actions over and over when everyone tried to give him the benefit of the doubt. It was bizarre. He could be someone with a background to figure it out and a nooby with internet communication. But in reality that is not likely on the internet. And it's priority 101 to someone faking something. Hence the speculations.

Now that we have the answer how can he ever proof he had it. You can't trust any secondary sources because his friends could be in on it. This is how the internet works. He had plenty of room to show his proof. Even just a quick text to drew showing the answer. Assuming he didn't before it was solved of course. Only drew could tell us. He's the only one that would be confirmable as trustworthy. Unless I was right and mach 10 is drew of course!!

On top if it, or as a part of it, his whole thing about garnerig views for a friend is extremely fishy naturally. It all hits all the bells and whistles. It makes you think he set the whole thread up just for that purpose. There is no other conclusion to make really when you think about it. It was a very easy situation to difuse. As is, it's basically impossible to find a youtuber or internate video maker who isn't desperate and greedy atm. It's the modern situation. And youtube and monetizing in general basiclly ensure it's almost constantly the problem. These types of issues are far worse than they ever were in the past.
Last edited: Aug 24, 2019

K
I don't think Mach10 was really on the right track. If I read the remaining posts I don't see anything that really relates to the way the text was really encrypted. It is not a puzzle in a puzzle, it has nothing to do with "...Remember" and there isn't really a "direction" to run through it. If 48/2 is meant to be a hint it would rather be 48/4 as there are 4 columns, not 2.

I think I've discovered how Drew obfuscated the text to be resistant to brute forcing and also related in design to the Salome route puzzle. Its a puzzle in a puzzle, I just have to iterate over the permutations to find the correct one.
Click to expand...

I'll keep my theories until they bare fruit.
....Remember
Try what was done in the first puzzle, read columns and break out every other line (48/2)
Wow, that just caused a big light bulb to go on. It always good to look at it new ways!
Oh Drew, you rascal... if this is what I think it is... very cool! Two thumbs up!
Click to expand...

I got the method for decoding, how it was all done.. every part fits... just choosing my starting point and direction to run it through. What would be your starting point?
Click to expand...

K126_Mephisto said:
I don't think Mach10 was really on the right track. If I read the remaining posts I don't see anything that really relates to the way the text was really encrypted. It is not a puzzle in a puzzle, it has nothing to do with "...Remember" and there isn't really a "direction" to run through it. If 48/2 is meant to be a hint it would rather be 48/4 as there are 4 columns, not 2.

You simply have to give proof. If there is no proof, it didnt happen. I was eagerly trying to show all my ideas and way of thinking, and I went thru a lot of probably interesting but totally wrong conclusions. In fact, the 48/2-idea of Mach10 gave me the belief, to look for a columnar decipher-solution. Well, than, another colleague found the "arkd wheel" and "gateway"-columnar method.

Anyway: it was a matter of teamwork, of "swarm-intelligence". There were dozens of wrong ways but one correct way. And this was done by many helpers. Many individual aspects from the puzzle. And finally it was solved.

But...you simple have to show your way you think. If not: you didn't think of it.

ASC said:
Thanks to all the previous posts about transposition cyphers, I have the solution.
Click to expand...

Glad to see this is finally over. Congratulations CMDR.
I have one question though.
The list was rather simple, but the encryption quite the opposite - Why was this encrypted? And for whom?

I'm assuming he thought the last puzzle got partially bruteforced and he encoded it more. 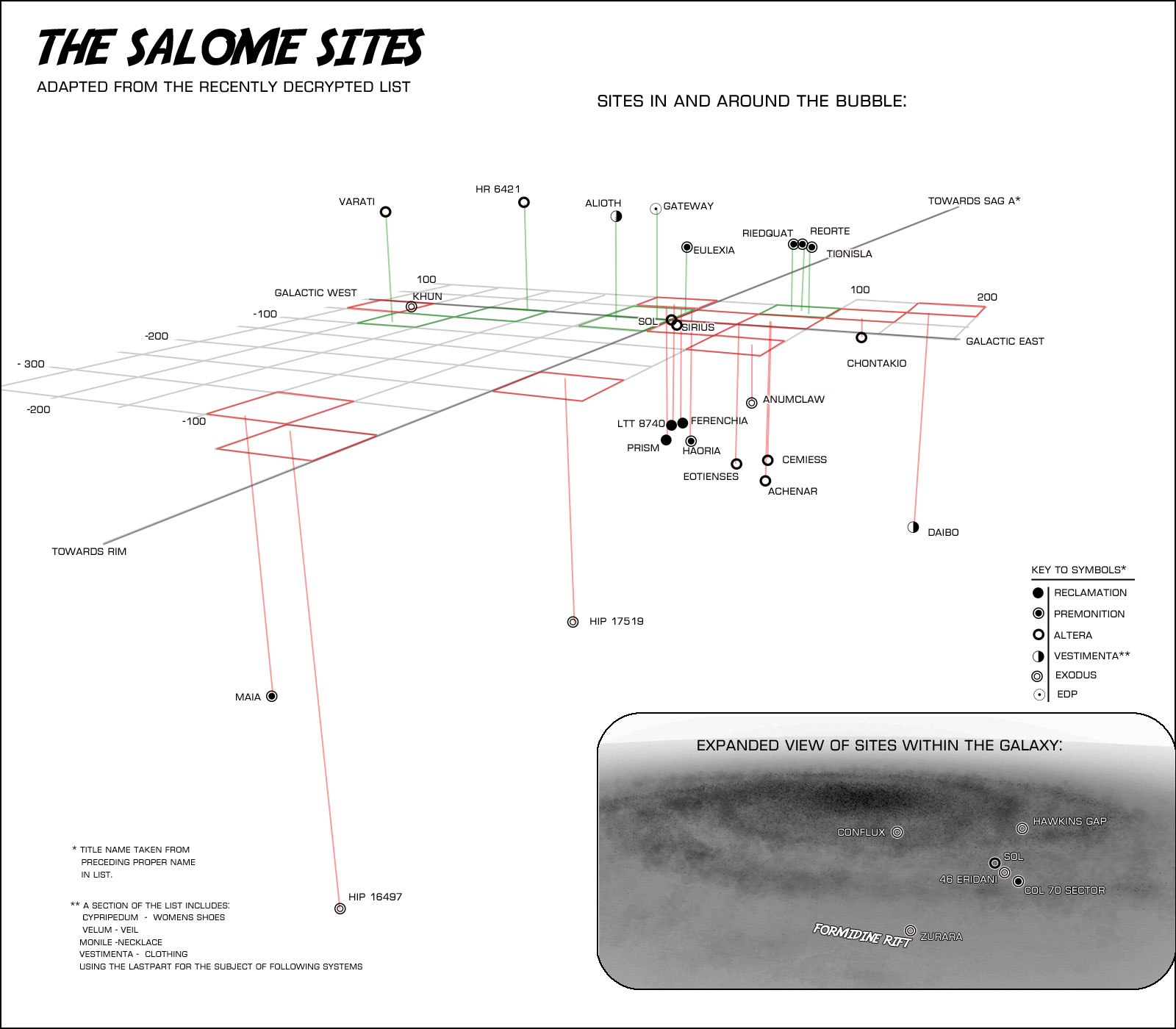 simulacrae said:
Ok put this together - probably missed something so please let me know if you see an error

You could add Teorge as well. I don't remember if it's in the decrypted text, but it's significant because of the com. beacons with Rebecca's logs.

V
Great map, if only something like it was in game for new players who missed it all....

Things we still don't know / may not be relevant:

How much of the literature was a 'pre-loaded' storyline / background from DB & IB & Fdev - eg the stripping of the 7 veils to join the Dark Wheel. Is that Drew lore or official DB lore (like The Club was invented & inserted by DB? Could it have a bearing on how to find Raxxla and the DW is what I mean?
Why the home planets are named as such?
Why Berber name was important? (if it was, could have just been reaching out to new demographics of readers showing international cooperation and heritage a la Star Trek having Russian character early on)
Why the escort ships were named as such?
What (DB-IB) means in the penultimate riddle? (not important at all now just need to know)
Why I now need to keep track on a 13 page Excel document to keep up with ED and play a game? Not complaining btw I love that its not easy.

Have other authors had bits put into the game to follow on from their works and if so...how much?

You could add Teorge as well. I don't remember if it's in the decrypted text, but it's significant because of the com. beacons with Rebecca's logs.
Click to expand...

Thanks! Good point i will give it a look this evening.

Vetinari said:
What (DB-IB) means in the penultimate riddle? (not important at all now just need to know)
Click to expand...

If i remember right... it was a reference to the first game (Elite) made as a partnership of David Braben and Ian Bell (db+ib) .. And later elite games were db-ib....