Thanks for joining us on our road trip on the run-up to today, but we have reached our final destination - the North America Animal Pack and 1.7 Update are officially out now! Update your game to join the fun

Update 1.7 is free for everybody who owns the base Planet Zoo game, and introduces several new and exciting features to enhance your gameplay experience! We've added, among other features, a couple of new Mapping Tools, giving you the ability to create custom heightmaps to alter your starting terrain, and also adding in a range of premade Terrain Type maps for players to use as a base - no more starting with a flat canvas (unless you want to!).

Joining the bears from Update 1.6, big cats are diving into the fun with new Deep Swimming abilities for the Jaguar, Bengal Tiger, and the Siberian Tiger. We've also adjusted the swimming depth requirements for individual species to make Deep Swimming habitats easier to manage and will allow deep-diving turns to remain smooth - these are in the patch notes below so check them out for more information.

Grab a friend and snag a seat because it's time for a show, with the new Animal Talk Seating Areas! These can be hooked up to your Animal Talk Educator podiums, and allow you to increase the viewing capacity of shows in a set viewing area. This will also help control the flow of guests in your park, helping prevent crowing around Educator points.

To further help with guest flow, we have also introduced new Path Barriers. These take the form of hard barriers that will block off paths and prevent guests from following that direction entirely, and kerbs, which will discourage guests from entering areas but will still allow them to use that route if there are no other options available.

Do you get frustrated having to manually adjust scenery objects during habitat builds to create a natural appearance? With the new Scenery Placement Randomisation Toggle, objects will alter their position between placement to give you another approach to building your park! But don't worry, if you prefer to have exact control over your placement, it can be toggled off.

Dig deep into all of the features above, as well as some quality of life Zoopedia changes, in our Update 1.7 announcement post and the patch notes below. 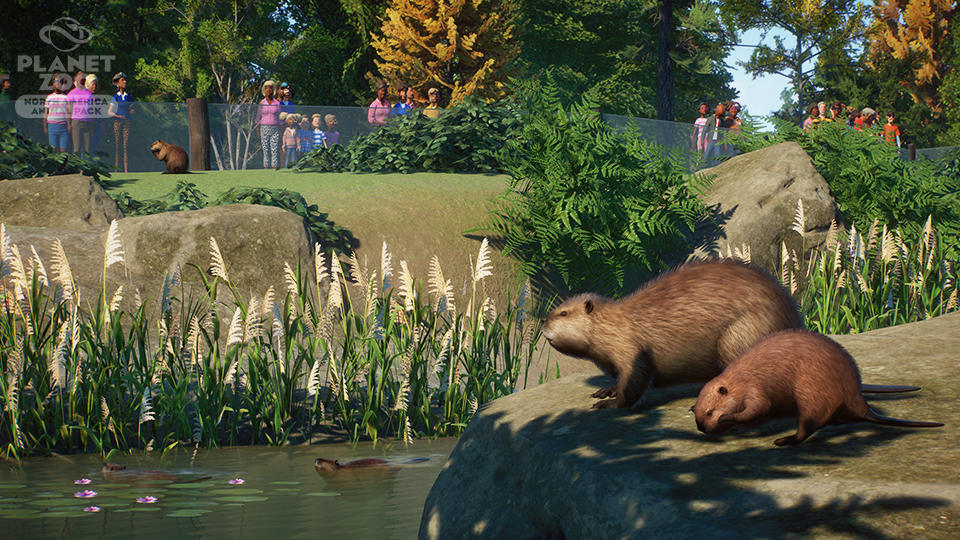 The Planet Zoo: North America Animal Pack introduces 8 new animal friends for you to enjoy in your zoos! Be sure to give your warmest welcomes to 7 Habitat Animals - the industrious American Beaver, the towering and majestic Moose, the sleek and smart California Sea Lion, the shy and solitary Cougar, the enormous American Alligator, the highly-sociable Black-tailed Prairie Dog and the elusive yet adorable Arctic Fox. Joining them is a new Exhibit Animal: the American Bullfrog!

To help you take the best care of our new friends as possible, we've also added some new enrichment items. Dress up your habitats with items such as the Pronghorn Piñata, Skittle Feeder, Melon Feeder, Underwater Feeder, and the Beaver Pool - they're sure to make a splash!

Lastly, take a trip to the gorgeous Blue Ridge Mountains in a new Timed Scenario! Do you have what it takes to spin this small zoo into a North American dream?

The Planet Zoo: North America Animal Pack is available now on Steam for £7.99 ($9.99, 9.99€)
You must have the base Planet Zoo game to be able to play this content. Update 1.7 is out now to install and is free for all players.

Thank you again to all of our wonderful community for joining us on our road trip in the run-up to this release, and for your continued love and support. We're constantly in awe of what you create and bring to this space, and we can't wait to see what the PlanZo Fam does with this content. Keep an eye on our social media for all future news and announcements, and for highlights of the North America Animal Pack. Also, be sure to tune in today for a special launch stream at 4pm BST!

This update contains many more bug fixes, updates and some new content.

Frontier
I AM SO EXCITED - thank you everyone for all the excitement in the run-up to this, I can't wait to see what you all do with this Pack

Thank you so, so, so much for the changes to diving depth. I previously avoided using some of the species because it was too deep but 2m is great!!!!

Thanks for the update, bought the pack in a blink of an eye!

Can we talk about the extended soundtrack in this trailer? Absolutely goose bumps.
Last edited: Oct 4, 2021

Antmar97 said:
Thanks for the update, bought the pack in a blink of an eye!

Can we talk about the extended soundtrack in this trailer? Absolutely goose bumps
Click to expand...

Best soundtrack since the base game theme. They really went all out on it.

Congratulations to everyone at the PZ team for the release! I cant wait to play once I get home. The trailer is heart-melting as always.

Everything looks great, thanks Frontier!

I
Love this! Downloading now and can't wait to jump in. Thank you to all the devs and CM's!

Wow !!! awesome both the DLC and the update !!!
I have a tremendous desire to get down to work with everything new !!!

Yes! I can see how I will be spending the rest of my lockdown. And it is fantastic to see that guests can now walk-through the red kangaroo habitat.

Just a reminder - Check out the sculpted maps!!

I especially like the temperate and tropical terrain maps.

Wait, do we have a list of species that can use underwater feeder?

Lelka said:
Wait, do we have a list of species that can use underwater feeder?
Click to expand...

Just hope i am not taking the following literally

Thanks for joining us on our road trip on the run-up to today, but we have reached our final destination - the North America Animal Pack and 1.7 Update are officially out now! Update your game to join the fun

F
Great update guys, thanks for the much requested barriers. And thanks for an awesome Animal pack.


But is there any info if the food spoiling option bug is fixed in this update where if you have food spoiling turned off that animals no longer get any food and they starve to death because there is some food in the habitat that they wont eat and since it wont spoil it doesnt get cleaned and therefore they dont get fed any food and since they dont eat that food in that spot they just starve.

Also if you have the defecating turned off then habitats dont get cleaned even if there is spoiled food in there it just lays there rotting away.

Really hope these bugs got fixed

Bobble2017 said:
Thanks for joining us on our road trip on the run-up to today, but we have reached our final destination - the North America Animal Pack and 1.7 Update are officially out now! Update your game to join the fun

Hope this does not mean the end of Planet Zoo just the road trip to this pack
Click to expand...