Question to the VR cmdr's.
What ingame settings do u use ?
I have problems reading the comms texting like it's to blur.

Which HMD are you using, that might be a useful detail?

I've used both an Oculus Rift CV1 and Vive, but I've not had to make an in-game changes other than choosing to use VR in the first place. Under graphics options you can change the VR quality, perhaps you have yours on Low? Certainly I can read the top left panel with the comms chat in it.

C
I have the rift.


First off you might get more traction on this posting it up in the dedicated VR forum: https://forums.frontier.co.uk/forums/elite-dangerous-virtual-reality/

I use the Rift. I've never had any problems with specifically blurry comm's text - at any setting. If it's only that which is the issue then that is pretty weird.

There could be something pretty basic here - the lenses are clean and adjusted physically for your eye spacing I presume?

Cmdr DRAGONHEART said:
I have the rift.
Click to expand...

OK, and what VR quality setting have you got selected in-game?

Adjusting the supersampling can help with blurry text. I would recommend using the built in VR quality settings first; use the best one your rig can cope with

C
High settings... all the rest is clear but comms not.

Marrs said:
Adjusting the supersampling can help with blurry text. I would recommend using the built in VR quality settings first; use the best one your rig can cope with
Click to expand...

Ok i will try that.

Been using a rift S now since Christmas.
Settings as follows.
Supersampling set to 1
All quality on either high or ultra except terrain which you should start on low and krank up as u go. Do this alone don't mix n match change one setting at a time.
Hmd on 1.50. Crisp as crystal.
Blur OFF
ambient occlusion on low krank up again on its own till your happy.
o7

Not sure a 1060 will handle that very well though.

I found the Vive very blurry for E: D, but the Rift CV1 and my current Odyssey+ are fine. It is definitely worth spending some time testing the effects of different settings, and this is much easier using Dr Kaii's ED Profiler.

Rift CV1? Or Rift S? Text will be blurry in CV1 or other first generation HMD. Changing hud colour from orange did help a bit on the vive.

There used to be HMD Quality slider which should be set to at least 1.25, but there are other contributing factors like supersampling value set in Rift software.

If you are using the CV1 change the HUD colour to green.

C
I will try Dr Kaii's ED Profiler.
But i was just in multi crew whit a cmdr ho has the same issue whit the rift CV1.
But then he went up to the Rift S and the blur is gone. So is it the Rift CV1 ho has trouble whit ED...
Last edited: May 23, 2020

Cmdr DRAGONHEART said:
I will try Dr Kaii's ED Profiler.
But i was just in multi crew whit a cmdr ho has the same issue whit the rift CV1.
But then he went up to the Rift S and the blur is gone. So is it the Rift CV1 ho has trouble whit ED...
Click to expand...

It's not that the CV1 has problems with ED, it's that the CV1 is very old and has a much lower resolution than the Rift S. While some things are alright in the game, text generally won't be too clear. I started playing this on the CV1, and the difference between it and more modern headsets with higher resolutions like the Vive Pro (same res as the Rift S) was simply night and day.

One thing I will mention: for some reason many of the VR settings presets in this game turn on AntiAliasing, and will sometimes set it to SMAA. Turn that off!! ED's in-game AA utterly destroys the sharpness and quality of the picture in VR, and the simple act of just disabling it will make such a drastic improvement in the quality of your headset's image that you would hardly believe it.

Once you've done that and tried it out, if you still have some blurriness then I'd personally set SuperSampling to 1.0 or maybe 1.25, HMD quality to 1.0, then go into SteamVR settings and start upping the resolution there. It can't increase the actual resolution you're seeing beyond what the headset can physically render, but what it will do is generate the image at a higher res and then downscale to your headset, which does add some clarity to the image. Doing this via SteamVR as opposed to in-game is a bit more performant.

Marrs said:
Adjusting the supersampling can help with blurry text. I would recommend using the built in VR quality settings first; use the best one your rig can cope with
Click to expand...

Nope. Supersampling is not the parameter to tweak, it's only good for pancake version anti-aliasing, or so I've been told. To use downscaled larger resolution and get things a bit more readable, I used HMD Image Quality and set it to 1.25. Here's EDProfiler, a nice utility to tweak and launch ED. I also got the HUD color in blue green so fonts are a bit more sharp. 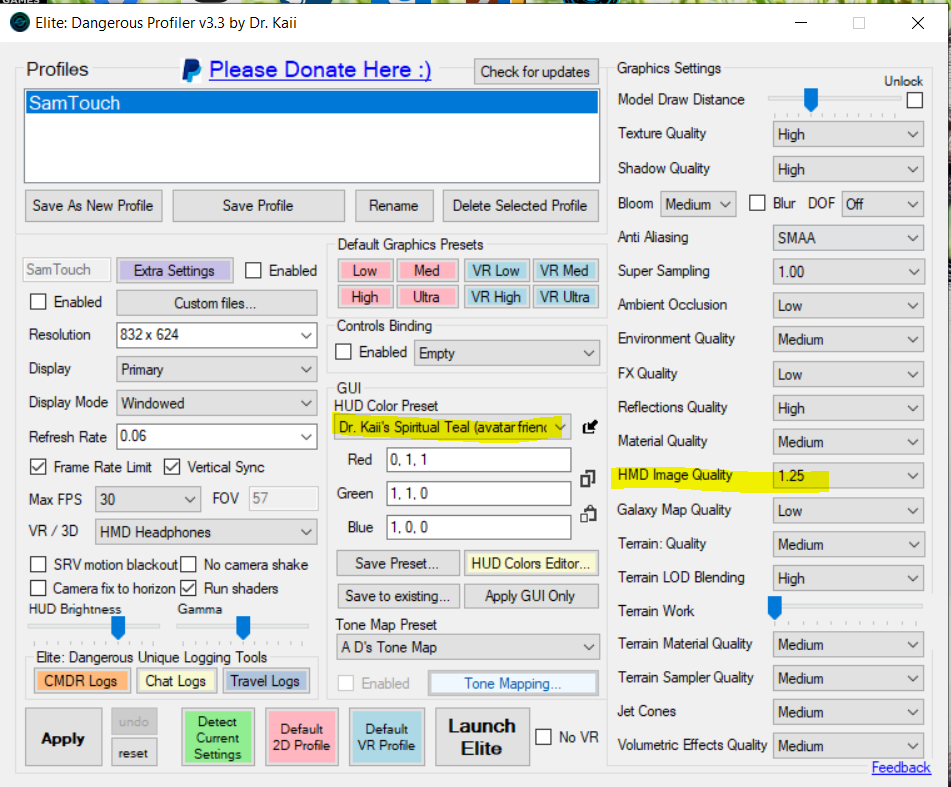 Aside from supersampling, as Morgan Grimes says general advice is that green HUDs are best for VR (not that I follow it personally).

C
Thanks for all the info... i will try it out.

Cmdr DRAGONHEART said:
Thanks for all the info... i will try it out.
Click to expand...

Hopefully it’ll help, but just remember to try turning Antialiasing off and see what you think. The default SMAA makes my game look like total crap on the Vive Pro and the Pimax, and turning it off made the game crystal clear.
You must log in or register to reply here.
Share:
Facebook Twitter Reddit WhatsApp Email Link
Top Bottom