Newcomer / Intro What are you up to?

WeComeInPeace said:
Leaving The Dweller with a fully engineered FDL, this eclipse decided to salute the progress

She's a beauty.Looking forward to hearing how she handles.

WeComeInPeace said:
Leaving The Dweller with a fully engineered FDL, this eclipse decided to salute the progress

Since moving house, I can't get it out of my head that Jameson Memorial ought to be more... impressive. Perhaps a unique looking (huge) station or, at the very least, a Coriolis with a one-off appearance. Ah well... perhaps when FD put in the update that allows players to own stations and decorate them, I'll take that project on board. Arf.

Rustnsawdust said:
Likewise here, although different reasons. Just back from a long weekend in Rome to celebrate LOML's birthday. Much pasta, pizza, gelato and red wine were consumed while the sun shone from a cloudless sky.
Click to expand...

Ah, la bella vita, molto piacere! That is definitely more like it. You can’t beat Italy for food, architecture, scenery, and generally being delightful.

I’m nursing some sunburn that I obtained from the depths of a forest, somehow. Stupidly, I didn’t put sun-cream on, because I imagined a large expanse of enormous Redwood trees would stop the Californian sunshine a bit. But they didn’t. So I’m not playing for a week either, as I am at a conference for a while. This might mean more posts from me during the less rivetting moments of the event

So, after a year's break of ED, I've decided to come back to ED but on PS4 instead of my original side on PC.

I've decided to head down a different route. I used to be an explorer on PC, but am currently building up funds on PS4 before deciding which way to go.

Part of me is thinking Bounty Hunter to start, but I also like the idea of trading...

Phongsalt said:
She's a beauty.Looking forward to hearing how she handles.
Click to expand...

She flies pretty well. Better than I'm able to control, but she has a strange tendency to "stall" in turns. Also even with a G5 PD she runs out of juice with 2 pips to engines when constantly boosting. The latter is less of a problem, since I like to "snug" during combat. Anyways she handles well enough to stay behind any larger PvE ship, which is all I'm asking.

There ought to be some way to test engineering before throwing your mats on the table, sort of a "test drive". I went for long range pulse lasers this time, because they have a low power consumption, but I'm not completely convinced yet. For some strange reason my beams seems better. Likewise with the frags I use. I've tried overcharged/screening shell, and it's probably just my brain messing with my brain, but I do prefer double shot/screening shell. Those are evil at very close range!

And all the fear about open and gankers seem slighty overrated. Today nobody has tried to interdict me, so I had to go to a Haz Rez (in open) to test my new toy. I've turned off "crimes against me", but I wont interdict anyone myself. Still I can highly recommend open, as long as your ego isn't too fragile. You wont win a lot of battles against some of the good PvP'ers. They are "skilled!"

Well I made it up to the Glorious Nebula but the detour has been a bit of a disappointment. One of the main reasons I wanted to go there is because I've always wanted to go really far off the plane where you can get one of those amazing views of the galaxy like I've seen in a few videos and screenshots. I remember seeing one in my very early days when I probably only had a 15ly jump range and such far flung places were inaccessible to me, ever since then I've wanted to see one of those views for myself. I kind of got it once when going down below near the core, got a nice cloud effect above me but not far enough to get a real big picture. I thought I was finally going to get that but this system is too far from the core to get a good view of it from this height. The Milky Way looks pretty much the same as it does from the Bubble but maybe a little thicker and I can kind of make out the bar.

The nebula itself isn't that amazing either. I've seen quite a few planetary nebulae and I just came from a much more colorful/interesting one in a much more interesting system. This one is just blue and just has a handful of planets, the most interesting of which is an ugly brown pebble notable for being very misshapen and only 143km in radius. That's where the system's tourist beacon is as well.

It ended up being easier to get to than I thought though, the stuff I had read made it sound like it was dangerous to try and reach and a Google search turned up countless threads from various sites of people calling passenger missions there "a trap" and complaining about not being able to make it. It must have all been old, maybe before injections or something, because it was pretty easy going and I only needed a few injections on my ascent with premium not being required. The only pain was manually plotting the course.

Jammy3112 said:
Part of me is thinking Bounty Hunter to start, but I also like the idea of trading...
Click to expand...

Just bought two more ships for funsies. Up to 27 now. Mainly only the bigun's to go before my journey to the dark side is complete 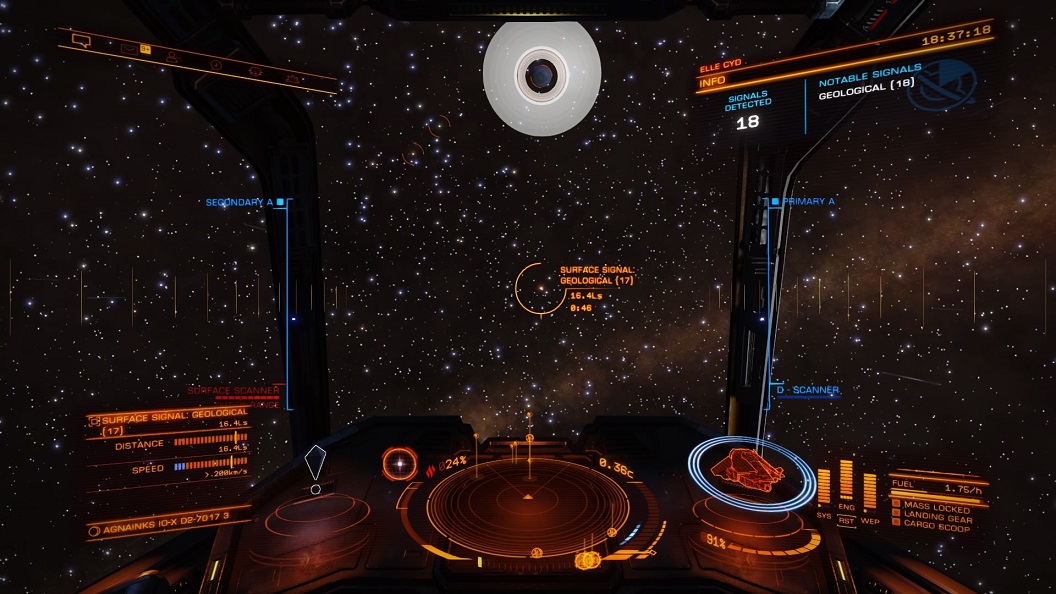 About 40 jumps from Sag A*.I say about 40, because the route plotter,apart from pointing my nose in the general direction, has proved particulary obtuse on this leg.Every time i log back in i've lost a half dozen or so neutron stars.Or it refuses to plot unless i sit and watch it.Or maybe it just flips open the atlas at random and jabs a pin.(which is more or less how i do it, so i can't really complain.)But i shall have to stop treating it as a satnav,and instead as the navigator in the passenger seat who occasionally winds down the window to ask directions of the local yokel. 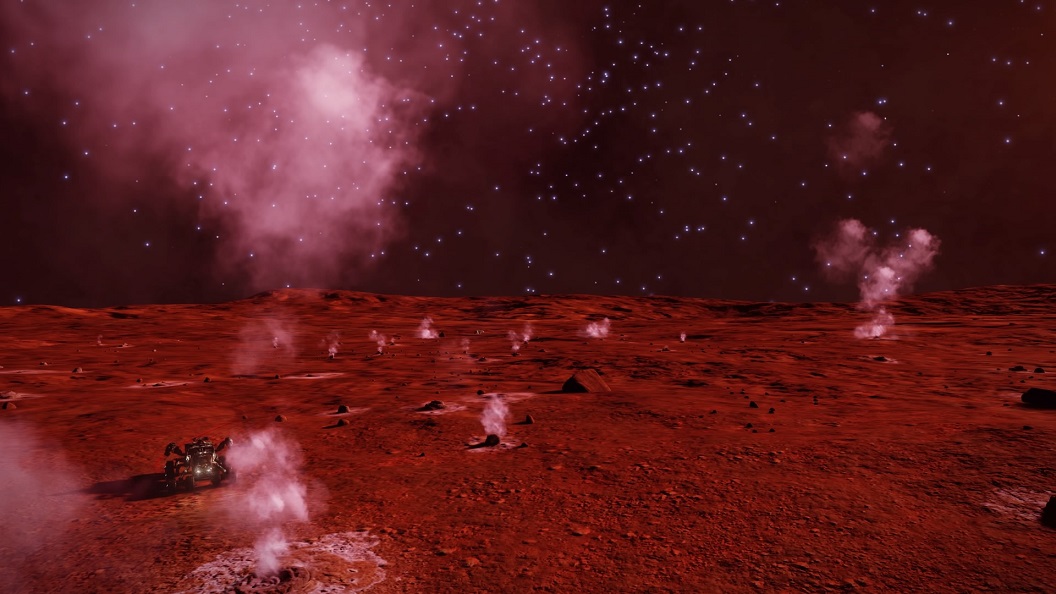 The new SRV has worked out well and had a great time at Candyfloss Geysers.Later we camped out under the stars.It was a bonding moment. 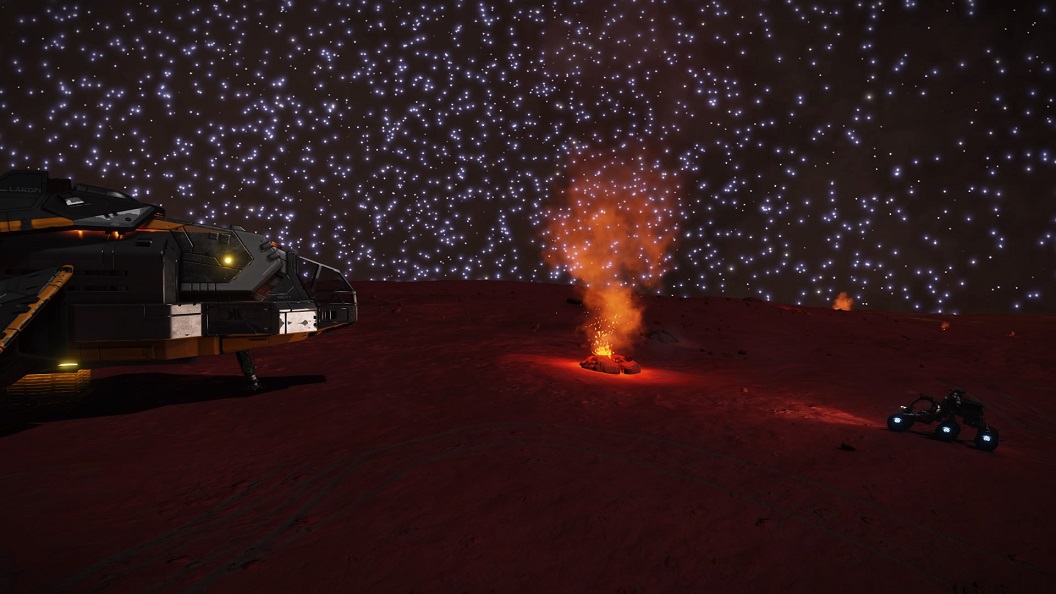 Couple of bumps and scrapes,nothing that could't be fixed,but one cargo hatch malfunction that spilled a few precious limpets into the sun.
One large impact on landing(1.2g counts as heavy world, right?), which used up a few more, but it was all worth it to find this. 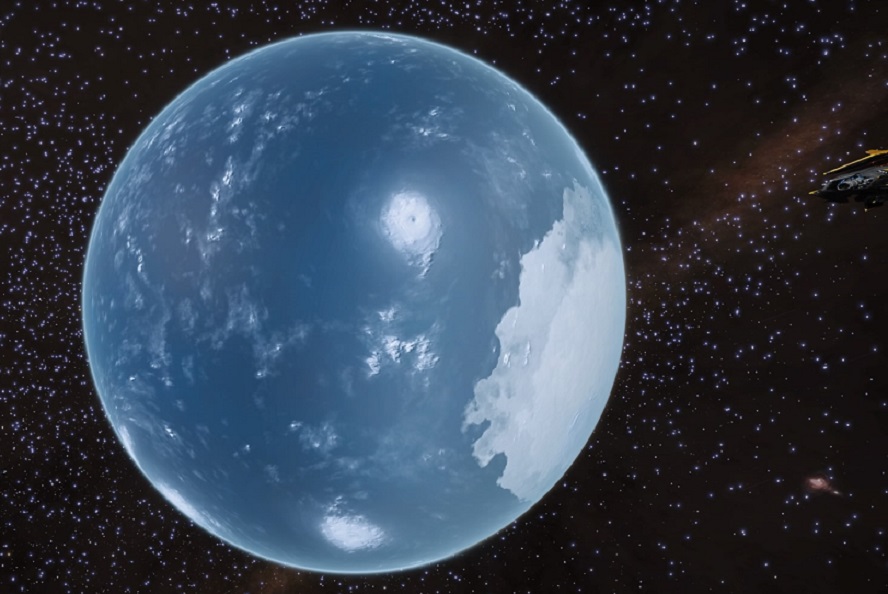 R
One of my many other hobbies is railway modelling, and just came upon this forum post that gave me a moment's confusion.
https://www.rmweb.co.uk/community/index.php?/blogs/entry/22586-the-gramodels-kit/
Promise it's perfectly safe, and all will become clear if you read it. With a tip 'o the hat for one of our favourite forumites

Rustnsawdust said:
One of my many other hobbies is railway modelling, and just came upon this forum post that gave me a moment's confusion.
https://www.rmweb.co.uk/community/index.php?/blogs/entry/22586-the-gramodels-kit/
Promise it's perfectly safe, and all will become clear if you read it. With a tip 'o the hat for one of our favourite forumites

Rustnsawdust said:
One of my many other hobbies is railway modelling, and just came upon this forum post that gave me a moment's confusion.
https://www.rmweb.co.uk/community/index.php?/blogs/entry/22586-the-gramodels-kit/
Promise it's perfectly safe, and all will become clear if you read it. With a tip 'o the hat for one of our favourite forumites

There was another thread on the rmweb site some years ago, not based on the same kit of bits I think:

A Clyde Puffer, The Vital Spark.

As I was browsing Ebay, I spotted this very nice Clyde Puffer ship model, a wooden Far eastern model, in O scale size, at ??9.95!!! About 16 inch long, quite detailed, well finished, but worth a spot of re-working and detailing up. the hull has the right lines, albeit a bit shallower in draught t...

(I stopped railway modelling when I developed "Hornby Back", still got loads of kit in boxes somewhere.)

... and there is a yootoob from the USA of a RC boat version:

"The smertest boat in the tred!"

Speedcuffs said:
Bought a Mamba.
No idea why.
Done 99% of the engineering, kitted it out with MCs.
Got jumped at one of the engineers. Tap boost... Bye bye!

Buy some AX weapons and it's perfect for hunting Thargoid Scouts.

LetItBleed1980 said:
Buy some AX weapons and it's perfect for hunting Thargoid Scouts.
Click to expand...

Nice, I'll consider that. I'm 10% off Elite and saving it for the (Fatherless) Xeno scum.
Hardpoints all on top?
Hmm.

Speedcuffs said:
Bought a Mamba.
No idea why.
Done 99% of the engineering, kitted it out with MCs.
Got jumped at one of the engineers. Tap boost... Bye bye!

The Mamba is excellent for just cruising around, especially in VR. It's probably got one of the best views from the cockpit. Good for data missions. Very comfy to fly. It's decent against NPC's, but you need to adapt a different combat style than most other ships. Seeker missiles is one of my favorites on the Mamba, and long range lasers. Be careful not to make it too heavy, especially with dirty drags. Otherwise it turns like a Conda. Have you noticed the mug and the tape in the cupboard? 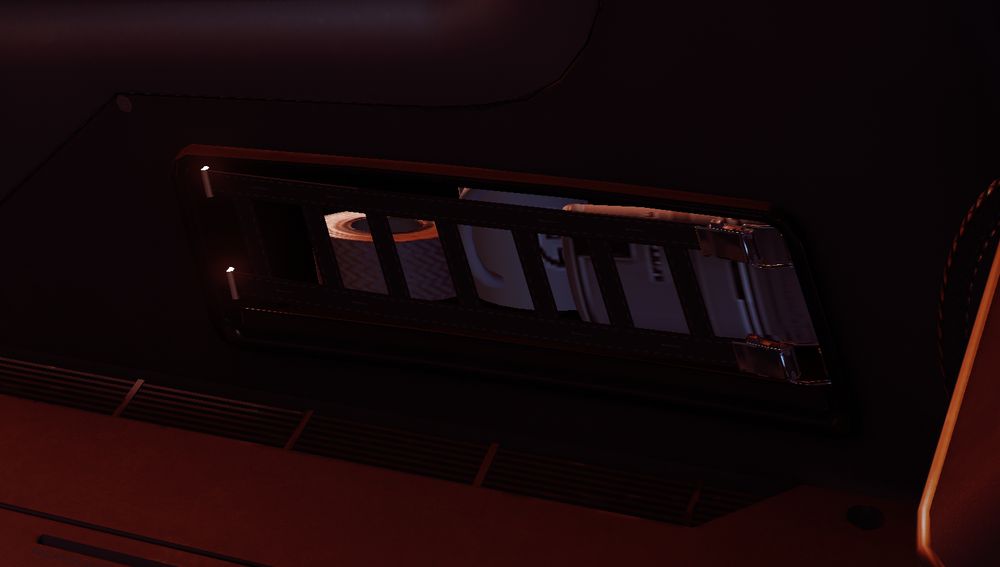 Was just recoupering costs for the ships I'd bought when the servers came down. Bah

Looking forward to what the update will give! Let's hope it's a bug free one.

I am only playing in solo mode up until I get the combat elite....so Mr Tyres o' don't take this the wrong way.
Moved my ships from Jameson Memorial to this new place with all the bling you could want right out side the front door.
Short trip to work, long trip to sell. Hoping to stay till December. And will try to own every thing by then. 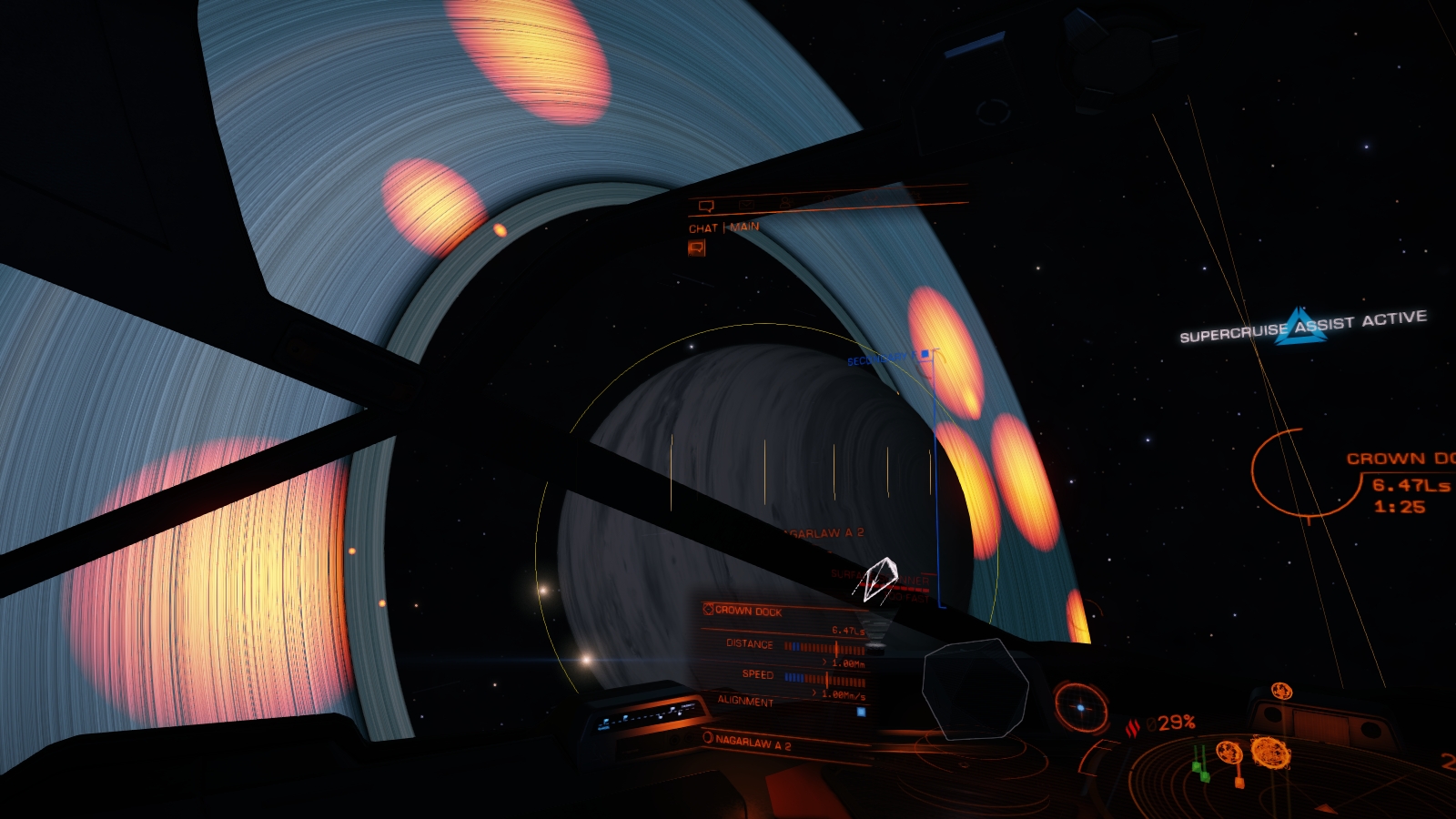 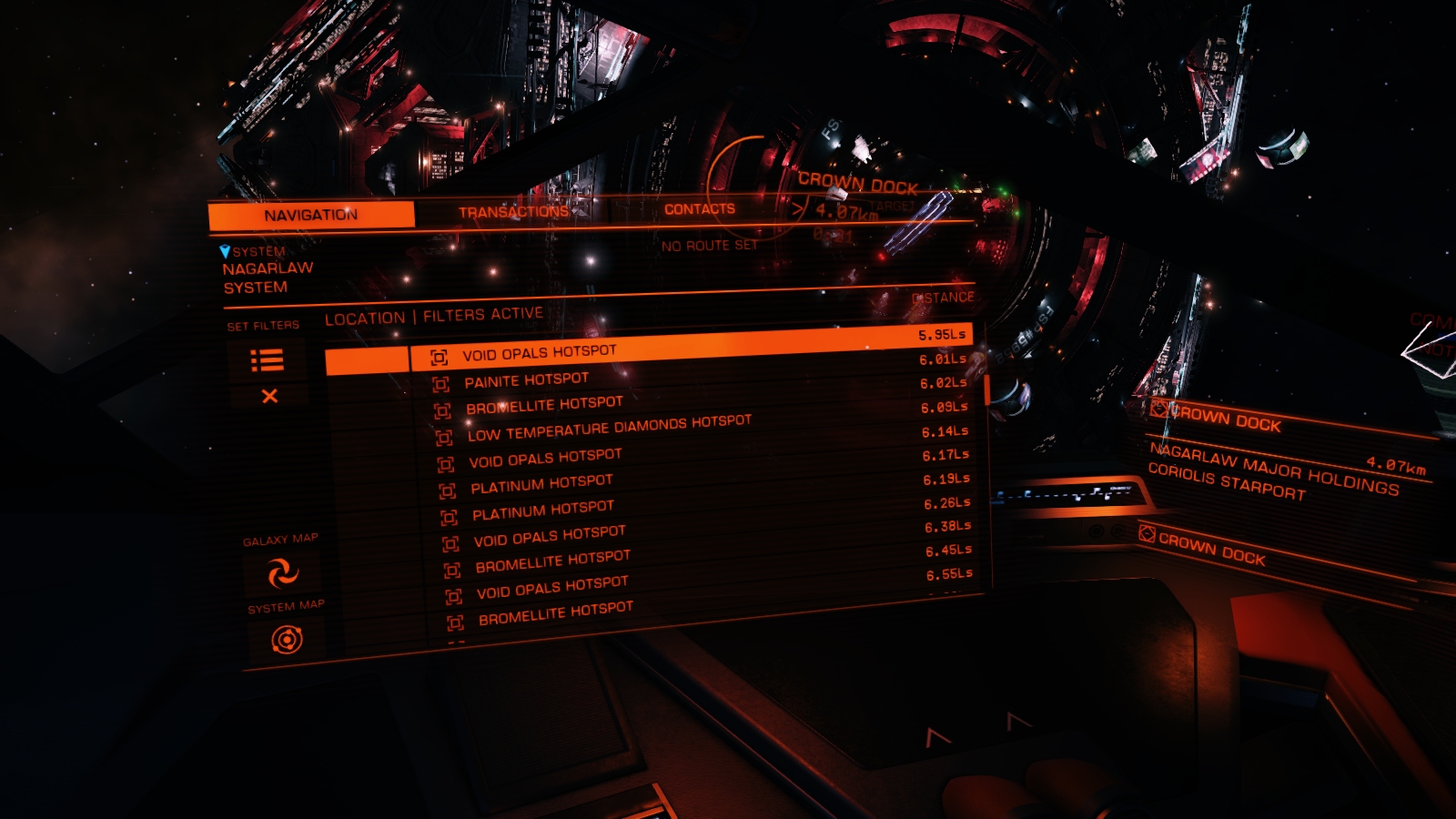 This is MINTEC Research , a very nice ring mining Python. In built run away mode for interdiction fleeing.... 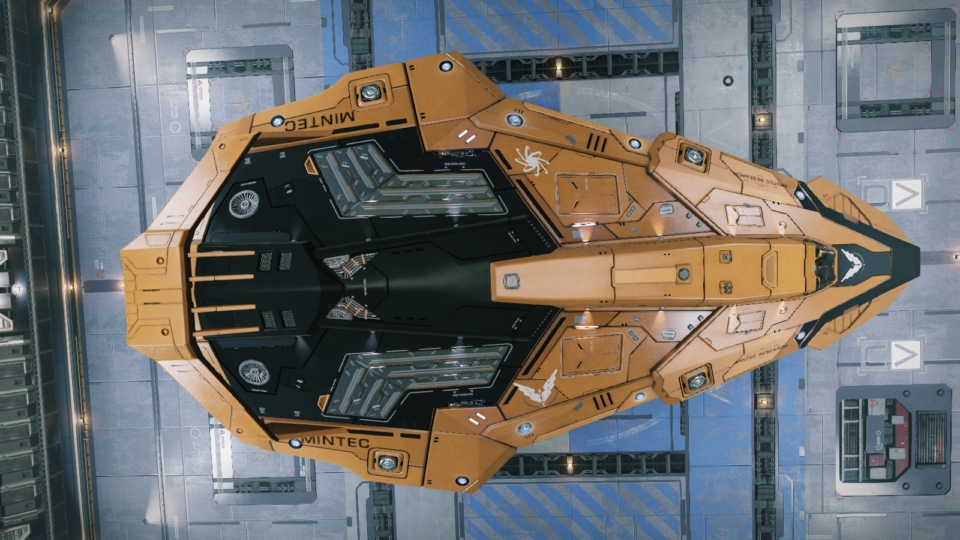