What kind of syfy are you?

Schmack said:
Something from Blade Runner hopefully or 5th Element.
Click to expand...

Bladerunner/Cyberpunk is happening now. Gibson was a prophet.

K
Seems to me what's happening now is Heinlein's "crazy years". As far as OP's question goes, David Weber's Honor Harrington series depiction of Earth is about right, if sci-fi. If SyFy, then Star Trek parody mixed with Teletubbies.

Das Boot said:
As a life long consumer of science fiction across a myriad of media, I am the kind that coils in revulsion at the use of syfy to describe it.
Click to expand...

It's speculative fiction what are these weird abbreviations

ED has an unusual approach to "alien-ness", primarily because the ED galaxy is so big. Hand-crafted weirdness, like some of the planets featured in various sci-fi franchises and authors, is out of the question (for the record, I'd vote Cordwainer Smith as best "creator of fantastic yet believable alien planets"). So, what do we see in Earth-likes in ED? Here's a montage I prepared earlier... 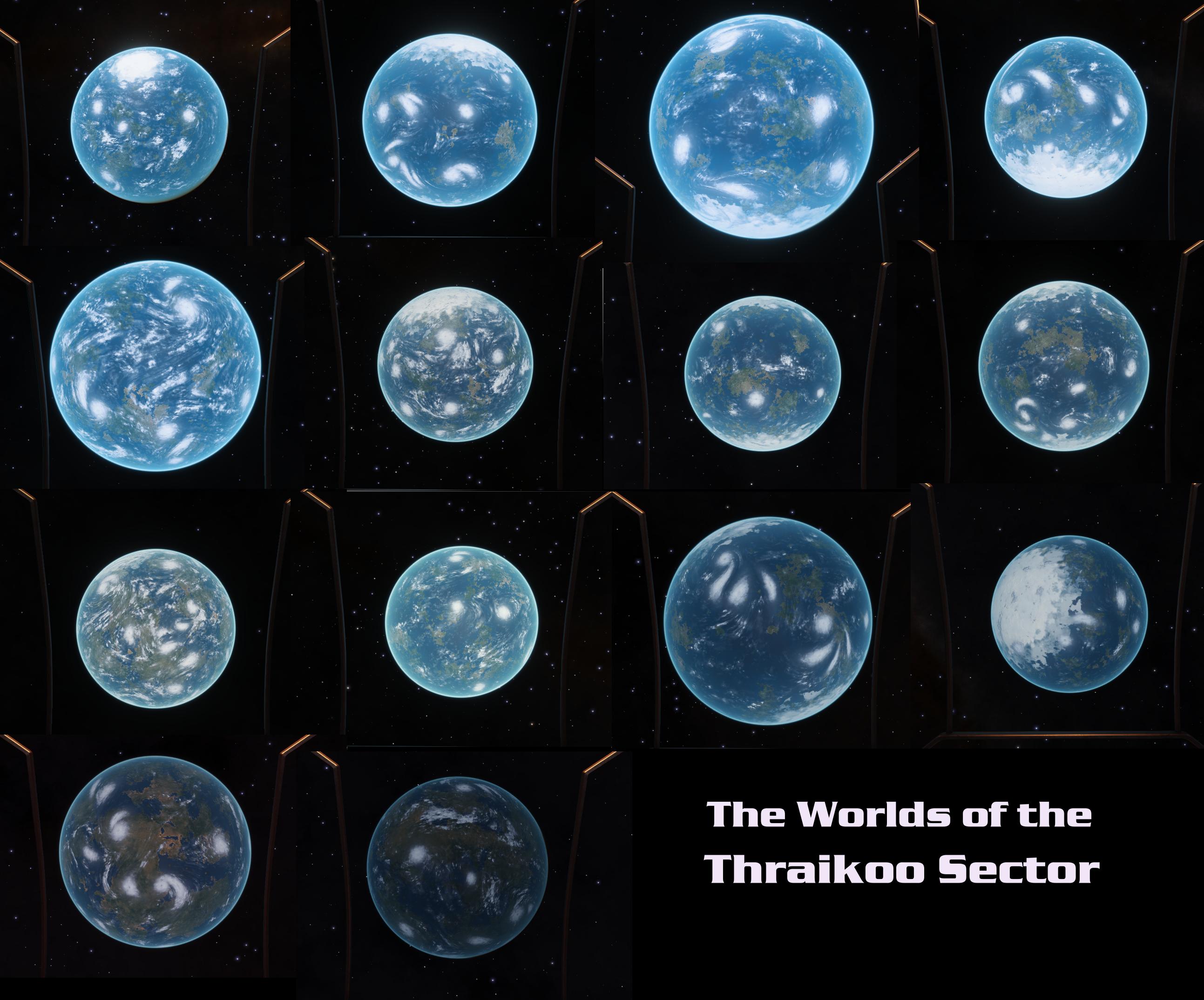 So, to generate the planets, we've basically got a fractal map-maker drawing the coastline, governed by basic stats for land-water ratio and icecap size. Weather patterns are largely determined by atmosphere thickness. It's the kind of thing you need for procedurally-generated planets - a procedure to generate their appearance. Coloration is fairly consistent; blue oceans, with green-and-tan-coloured landmasses. Any colour differences in the planets in the picture above are entirely caused by the different coloured light of the system's star. So ED is fairly conservative in it s estimation of what an "Earth-like planet" would look like from space - it sticks to "known science". So there won't be any cyan-colured grass, or red oceans, or green skies, because there's no known scientific explanation of how such things could come about. Not on a planet with human-breathable air, at any rate; if you want that kind of thing, go land on an Ammonia World.

This means that many of the ELW planets will indeed look "samey" up close, just as they all tend to look "samey" from space, as the procedures that generate them cannot allow for too much variation, lest the edge-cases of the procedure look completely cartoonish or otherwise ridiculous; they will want to make the algorithms such that an "average" planet looks realistic, from a currently-known-science point of view.

Does this mean that there won't be any weird, inexplicable surface features on Earth-like planets? Absolutely not. As we've seen with other aspects of the Stellar Forge, truly weird and improbable things will almost certainly happen, given enough dice-rolls. Glowing Green GIants were almost certainly not in the original intent of the Stellar Forge's creators, for example. But their improbability means that very, very few of the planets we will find will show them.

m0rl0ck said:
I expect lots of lichen.
Click to expand...

K
Is it wrong of me to instantly want to strangle the original post for using Syfy, it sci-fi mate. Syfy is the name of a tv channel that does sci fi shows and cancel every single good show they have going without competing the story.

But if they can bring over the technologies they have built for planet zoo, it could be something special, with the idea of genes influencing the looks of the animals, add in environment affecting those genes, such a system is how I would approach building ELW. Making it all unique is a huge challenge, making the above system produce hundreds or thousands of animals in the few seconds from orbit to landing on the planet, I hate to be the programmer that has to figure that out.

It gets a rough time, but aesthetically I like a lot of the things that Lynch did in Dune. We could definitely use more variety and exoticism in Elite - even in human space, you expect very significant cultural divergence.

Thinking about it, i would like to see more H.P. Lovecraft content influences and more H.R. Giger artwork influences.

IF we're talkin' the ED universe then it's fine as it is.

If we're talking about what it should be based on reality then lots and lots of HELL planets that are unfit for human habitation.

I'd be surprised if mankind ever finds an exoplanet that can support human life without some heroic level and very, very expensive terraforming.

Interesting list. But I can't help but think that YOU at least would have included Alfred Bester, CMDR Foyle.

Das Boot said:
Interesting list. But I can't help but think that YOU at least would have included Alfred Bester, CMDR Foyle.
Click to expand...

CMDR-ss47ply said:
Seeing as we are all playing the most realistic syfy game out there. What is a Elite earth like world going to look like? whats going to look to fake. Thats the hard part for me when it comes to syfy are any of these worlds going to look passable I mean I have no frame of thought as to what another planet in another solar system we have never seen before is going to look like. should it look like Star Wars, Star Trek, No Mans sky. what will pass the it looks real test with this group. o7
Click to expand...

It depends on whether we view them as integrated or separated.

Consider that the prior to the exploration of our own planet, we saw extremely few (none really) good predictions about how other continents would be like in terms of ecology, culture or architecture. We can use two examples... 1400s Tenochtitlan and 1400s Venice, two city states at the height of their power in the 1400s. Barring that both have to conform to similar physical laws of construction, they certainly look completely alien to each-other. The ecology, food, dress, culture and so fort is also very different.

But if we look at cities in the world today, we see much more conformity. Cultures borrow good (and some bad) ideas from each-other, imports / exports, exchange of information and reliance on identical technology also remove a lot of differences.

I think the Elite universe can fit both ideas. The universe is certainly integrated in the sense that transport and travel does not take much time. At the same time, it is also acceptable that a different planet in a different solar system could see itself as completely culturally different or that travel is so prohibitively expensive (for individuals) that cultures are more isolated.

I'm loving this thread, loads of authors for me to look up.

CMDR Pugwash said:
I'm loving this thread, loads of authors for me to look up.
Click to expand...

Its about clones traveling aboard a ship they have made sentient .....

I expect it to be Expanse - ive

I also love the work of Ray Bradbury though his work is often not science fiction at all...more twilight zone but brilliant none the less. Fahrenheit 451 is up there with 1984 as prophetic works, but unlike Orwell, Bradbury is not trying to make a political point.

As for FDEVs representation of an earth like, I don't think that will ever exist so I'm not sure it's worth contemplating how they'd do it or what it would look like though I will say they would probably do their research and try to make it fairly realistic. Without the pressures of over-population and scarcity it should look fairly utopian.
You must log in or register to reply here.
Share:
Facebook Twitter Reddit WhatsApp Email Link
Top Bottom