Back with a much smaller project this time, as it's more of a reimagining of an existing coaster. Originally utilising the Spiral coaster, Whirlwind was a ride I built way back in 2017 in the early stages of my park and, bearing a fantasy theme, was certainly a beautiful looking ride. For the past year or so, it even stood as the oldest ride in my park (the previous two coasters having been demolished). 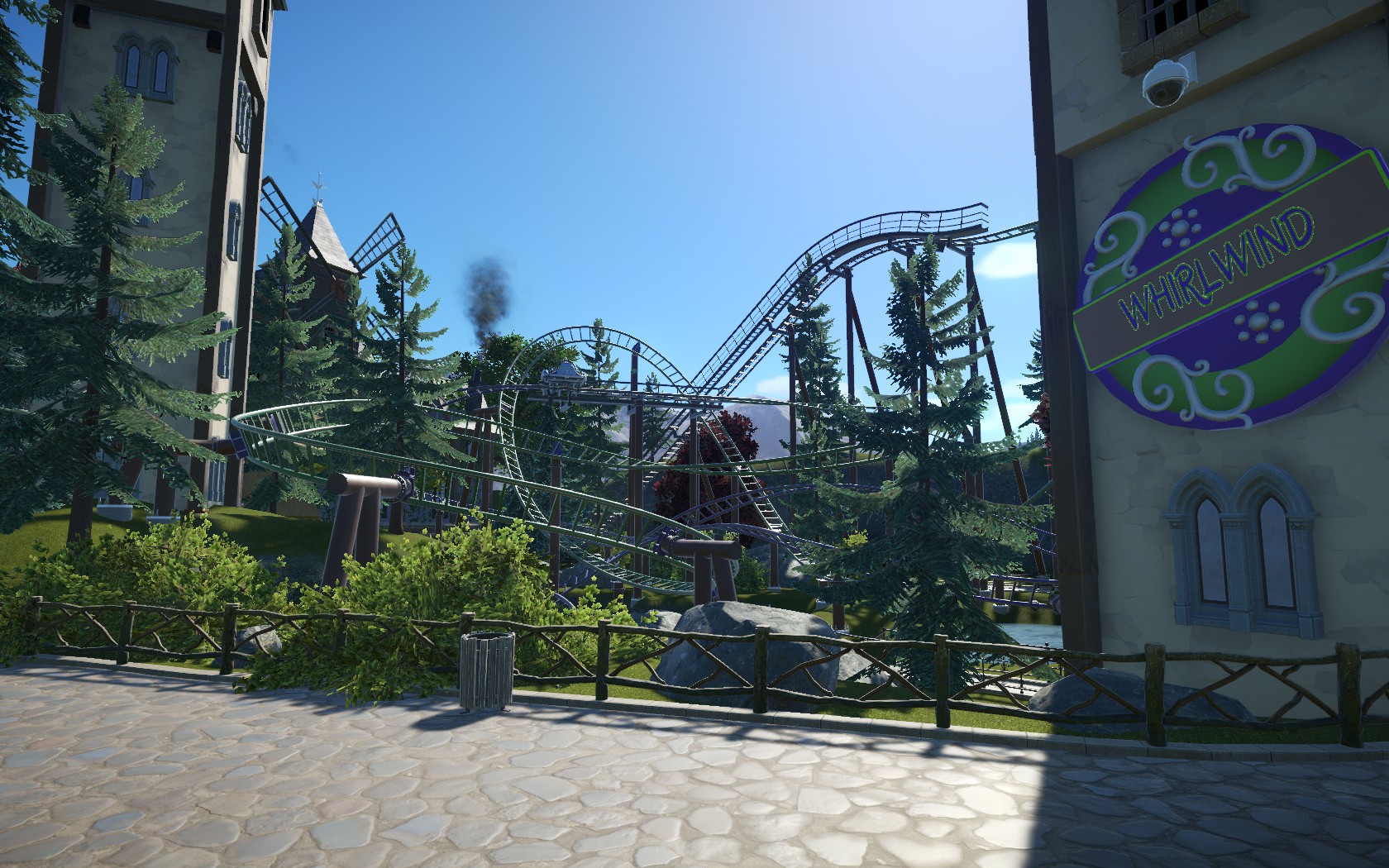 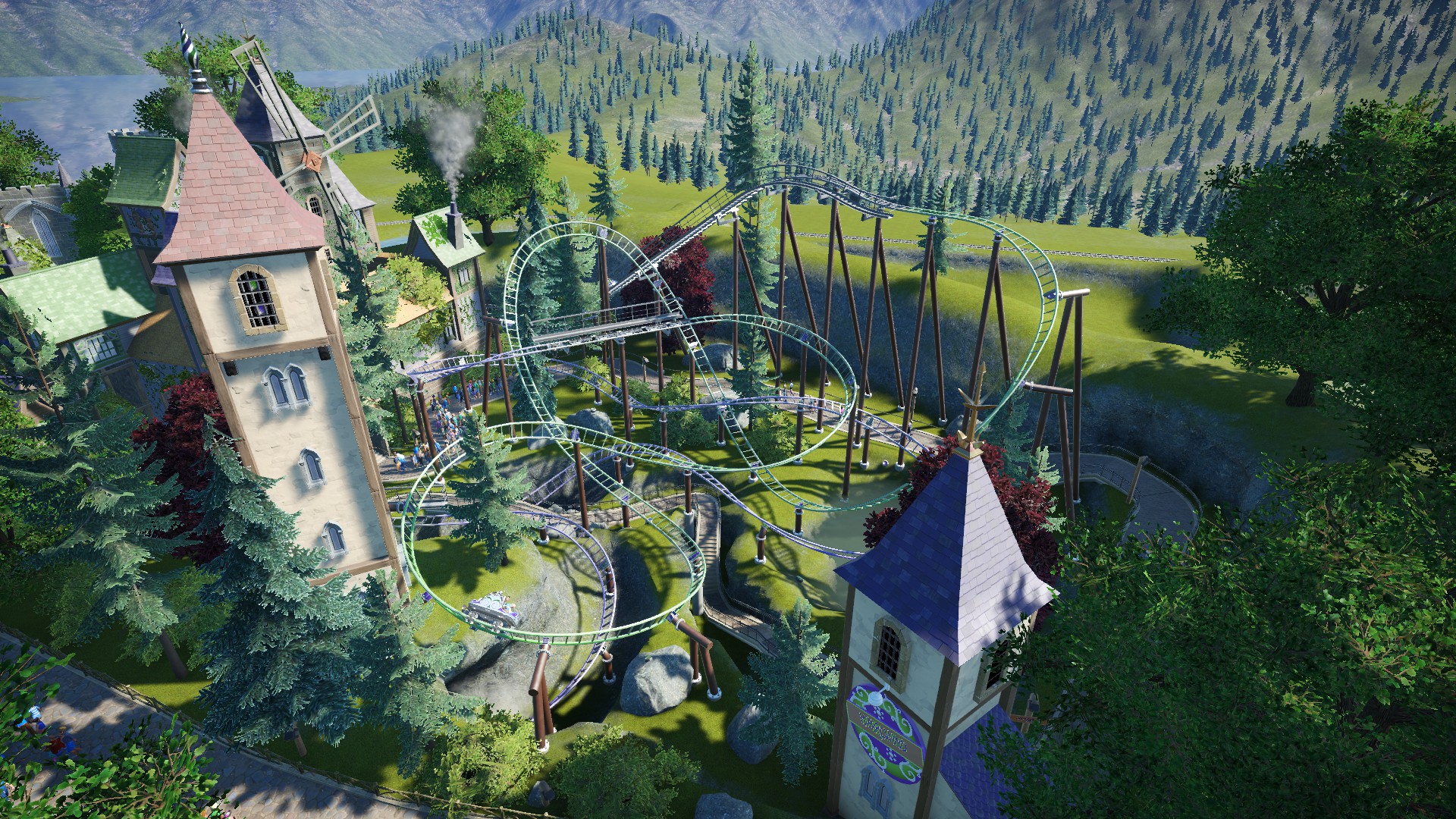 However, low reliability and shockingly low capacity would ultimately cause problems for the popular attraction, so it was by perfect timing that Frontier added the Classic Rides DLC. Following a trip to Toverland back in August, D'wervelwind had been a pleasant surprise for a ride experience, so the Interdimensional was just too good to miss. Eventually, the time came for Whirlwind to receive some much needed TLC, which brings us to present day.

While the original coaster, queueline and a few trees were the only things for the chop, the station building remained as it's a structure I'm pretty happy with, as well as 'the wizard's tower' seen on the left of the previous picture. 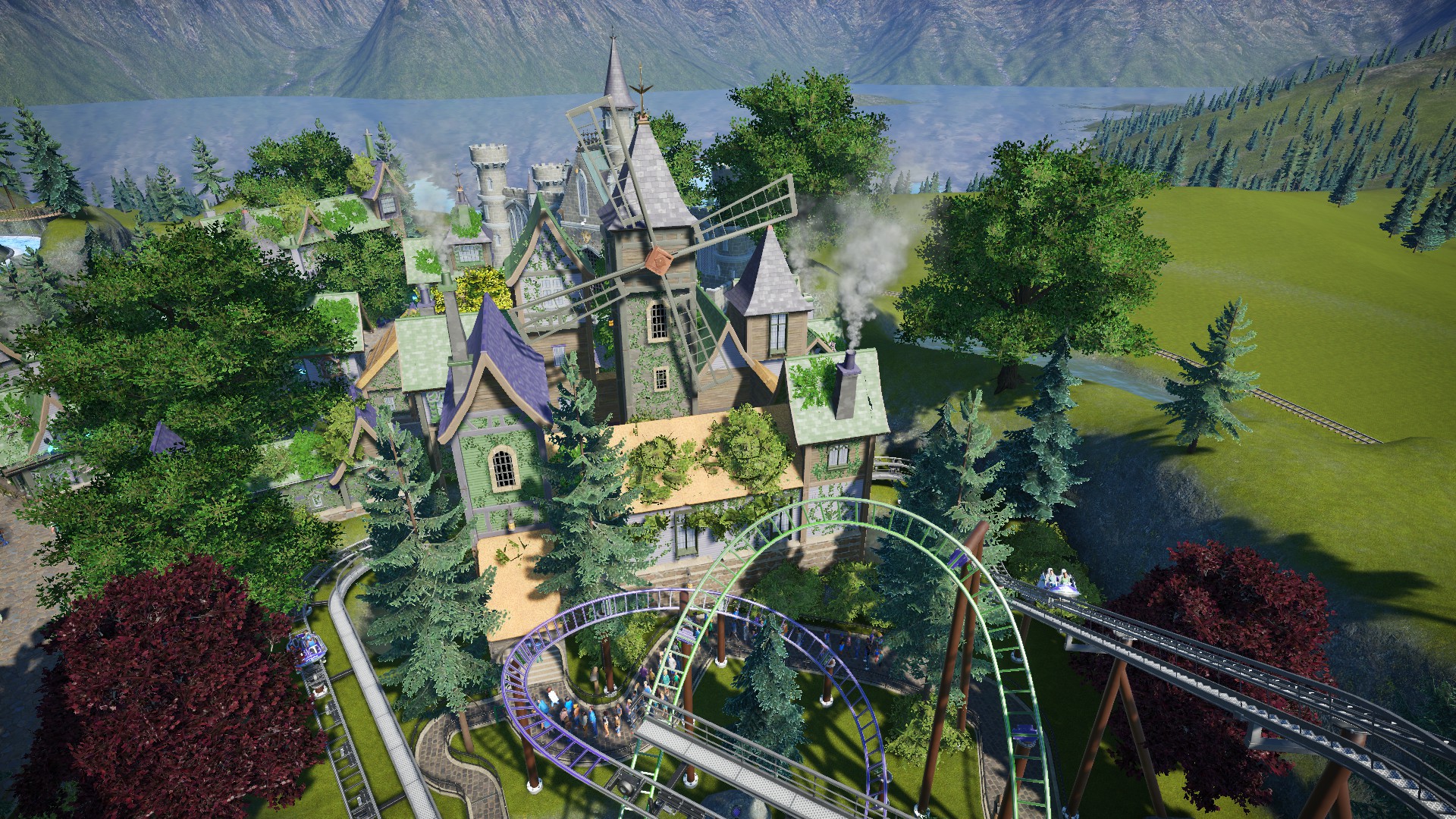 The new coaster follows a very similar layout to its predecessor, the main difference being the first drop, which will give riders a bit of suspense before hurtling to ground level. 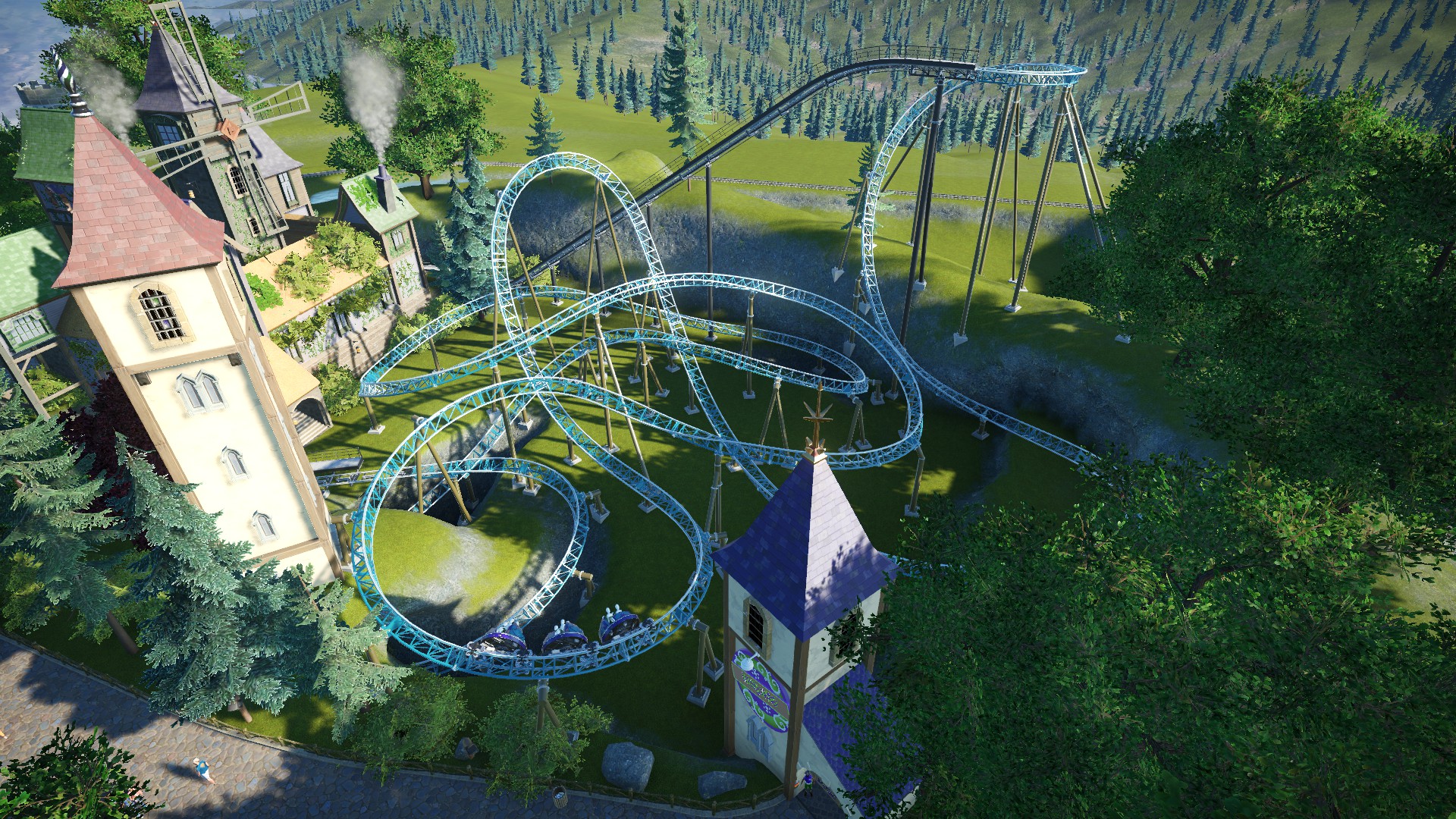 With coaster construction quickly over with and testing well underway, this leaves me plenty of time for scenery. As I'm using this as an opportunity to freshen up the ride, many buildings including the entrance and the station interior will also be receiving an overhaul, given the original look of Whirlwind had been from way back when I started playing Planet Coaster, so as in that time I've definitely learned a lot along the lines of lighting, set building and illusions, rest assured I'll be doing my darndest with this one.

Very minor update I know but I'll have more to present wherever possible.
Last edited: Mar 21, 2020

Nice project, thanks for sharing it with us!

Well...this really was a small job. The ride's finished and open already!

Whirlwind's gone up nicely and while I've tried to retain the beauty and contrast of the original ride and scenery, it's certainly come a long way from what it used to be. It's even proving to be far more popular than before! :O 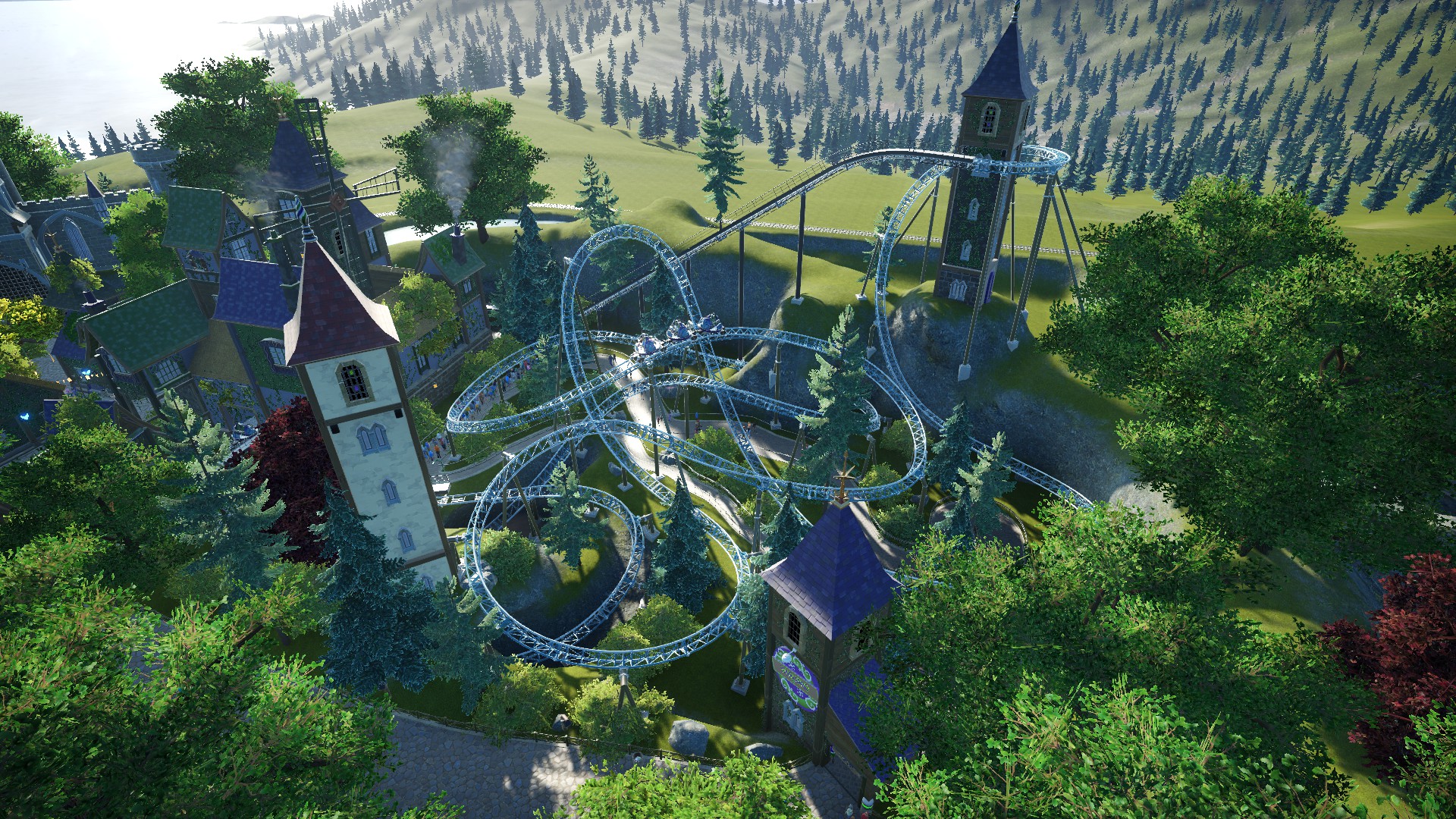 First off, the ride entrance received a much needed "re-skin" in order to fit in with the station's style (the original limestone appearance was starting to look ugly). Years ago when I redesigned the station building and the surrounding area, I went for a natural, overgrown and quirky look and feel as the theme of the ride is supposedly that this storm was the accidental result of a wizard's failed spell, causing the village to be rapidly taken over by nature. To fit in with this, I paid extra attention to both architecture and colours, and this of course applied here as well. 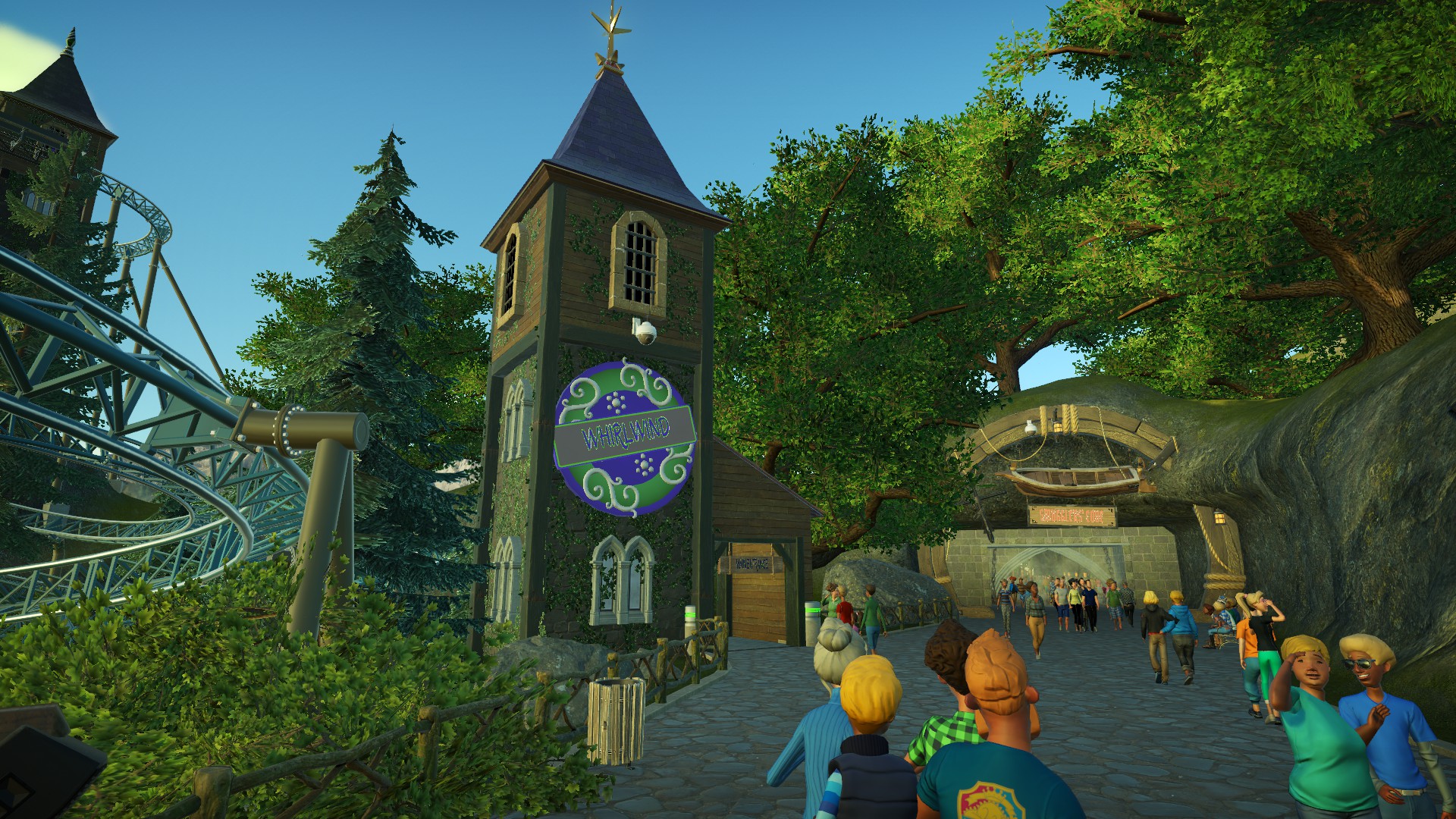 I personally love incorporating my sense of humour into my rides, which is why this ride's always been special to me in some way. For example, the long-standing 'wizard's tower' had always been a timed effect, giving the impression that there's indeed someone up there repeatedly trying and failing to successfully cast a spell...and most likely cursing after every attempt. This would be seen as either an explosion from within or even jets of smoke blasting from the windows. Trust me though, he's trying his best.

For the revamp however, this was duplicated, re-skinned and moved to the first drop - the original limestone tower now stands dormant, as the effects are now triggered by the train after it leaves the lifthill. This gives the ride a lot of purpose and it gives the feeling of journeying to the tower, only for a spell to be cast, hurling you into the ensuing mayhem. 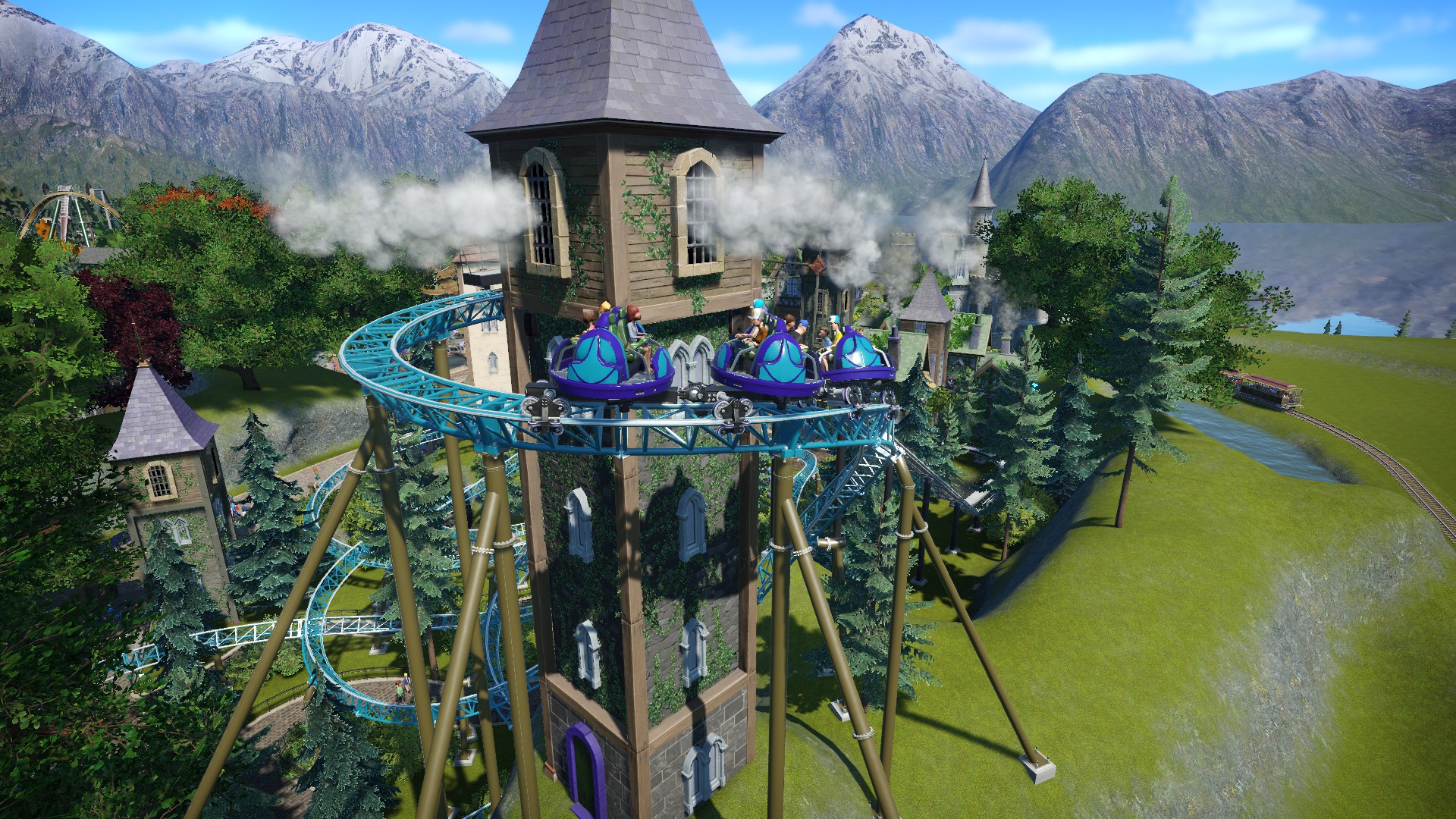 I'd say the first drop is what symbolises the ride well too, as hence the name Whirlwind, the drop almost forms some kind of funnel if viewed from the right angle. 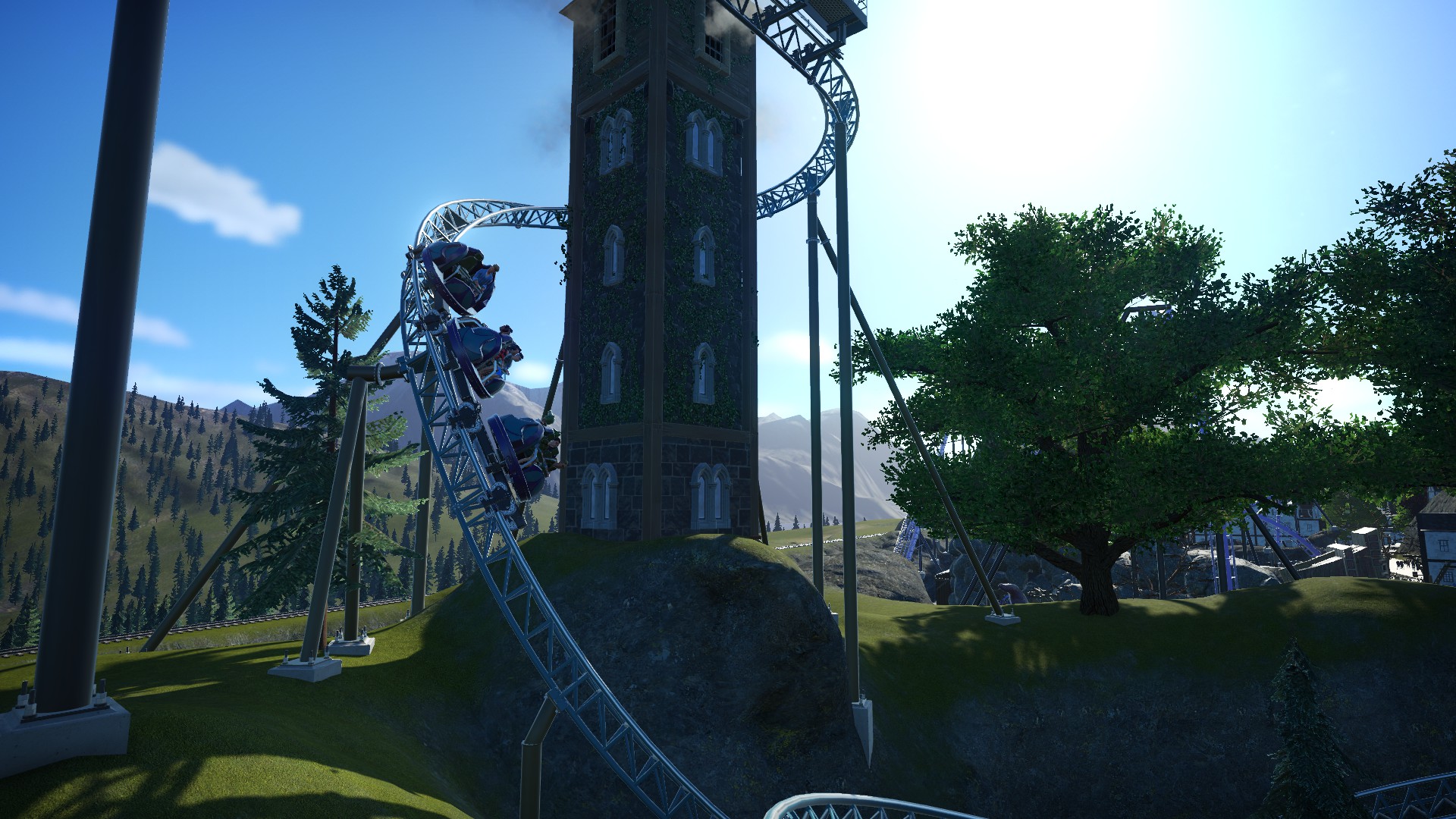 Moving onto the station, guests pass through a living room with a large bookcase, and you could say you're hardly in any need for clarity of our wizard's character. While the scene itself has received some new props and lighting, if we're using humour in the attraction, then it's pretty obvious why the bookcase was spared, having been here the whole time. 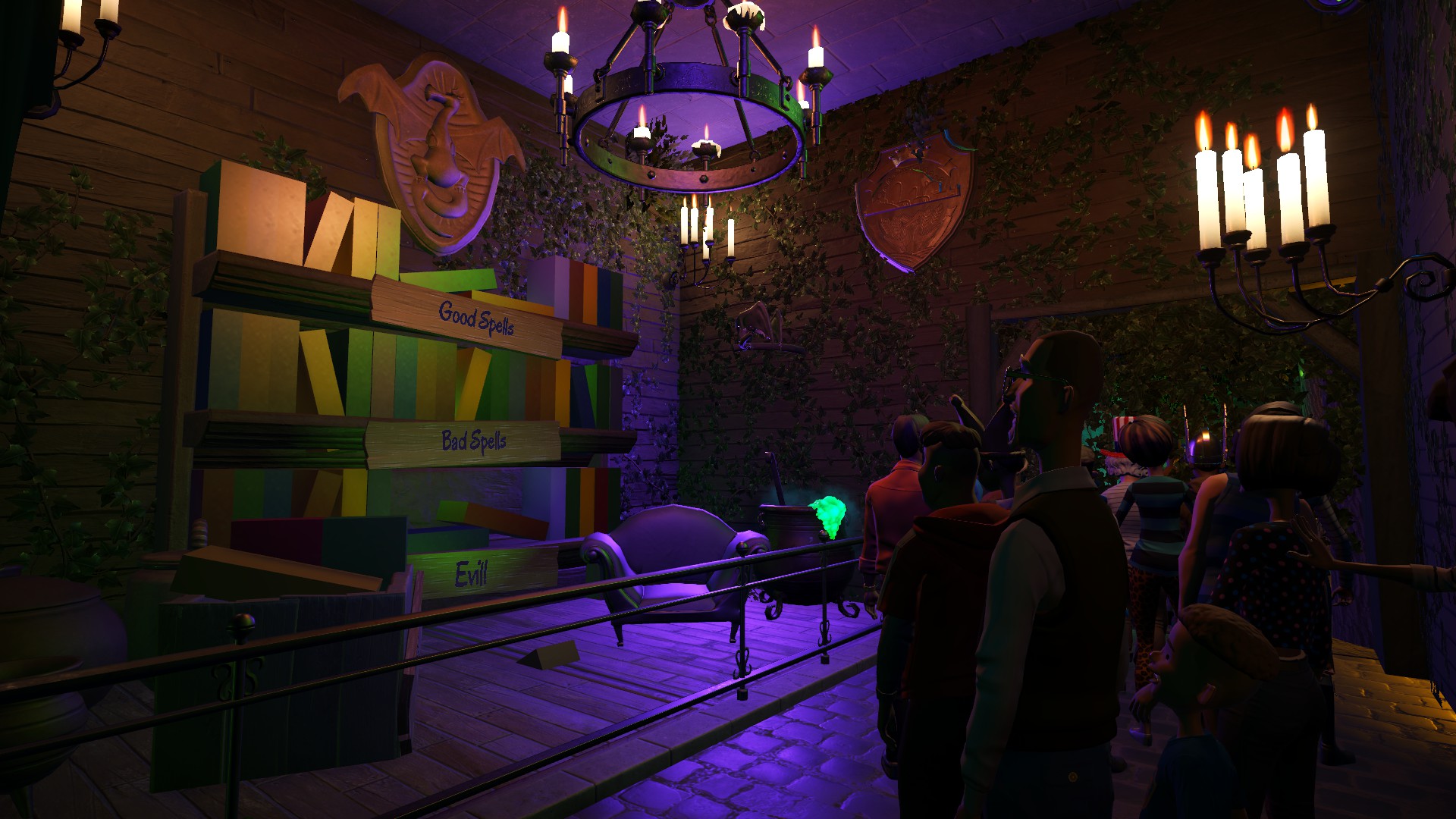 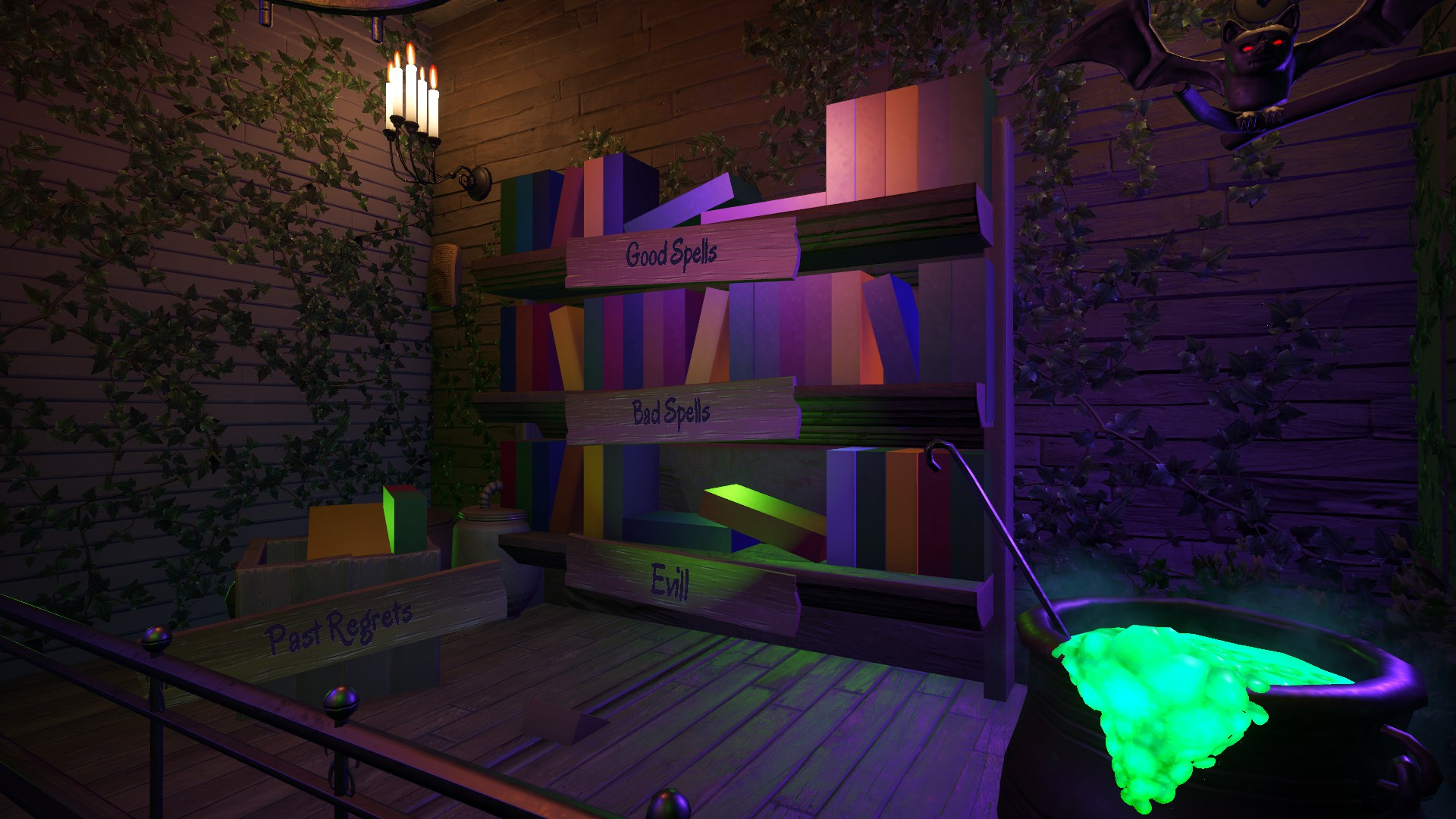 As for the loading platform, I really pushed for transformation, as originally, the station was lazilly done. Here's how it looked before: 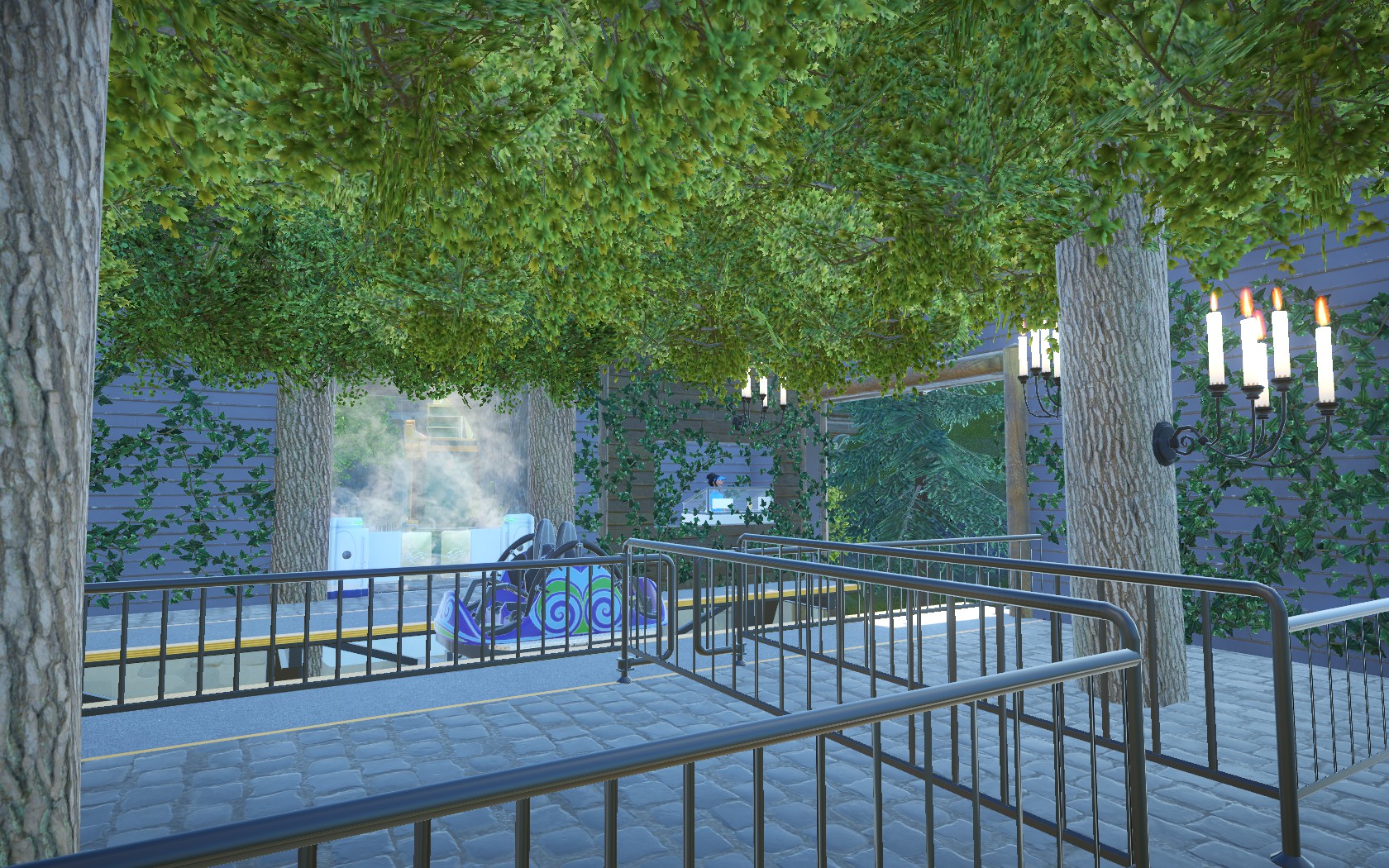 Now, the station is much more of an immersive forest setting, featuring some new lighting, fencing and flooring. Most notably, after successfully using billboards to create some minor but cool illusions for my horror attraction Cursed Tomb, I got very experimental here by adding some backdrops to the walls, while also using those log pieces to transition between panels. I'd say all in all it's been done rather well! 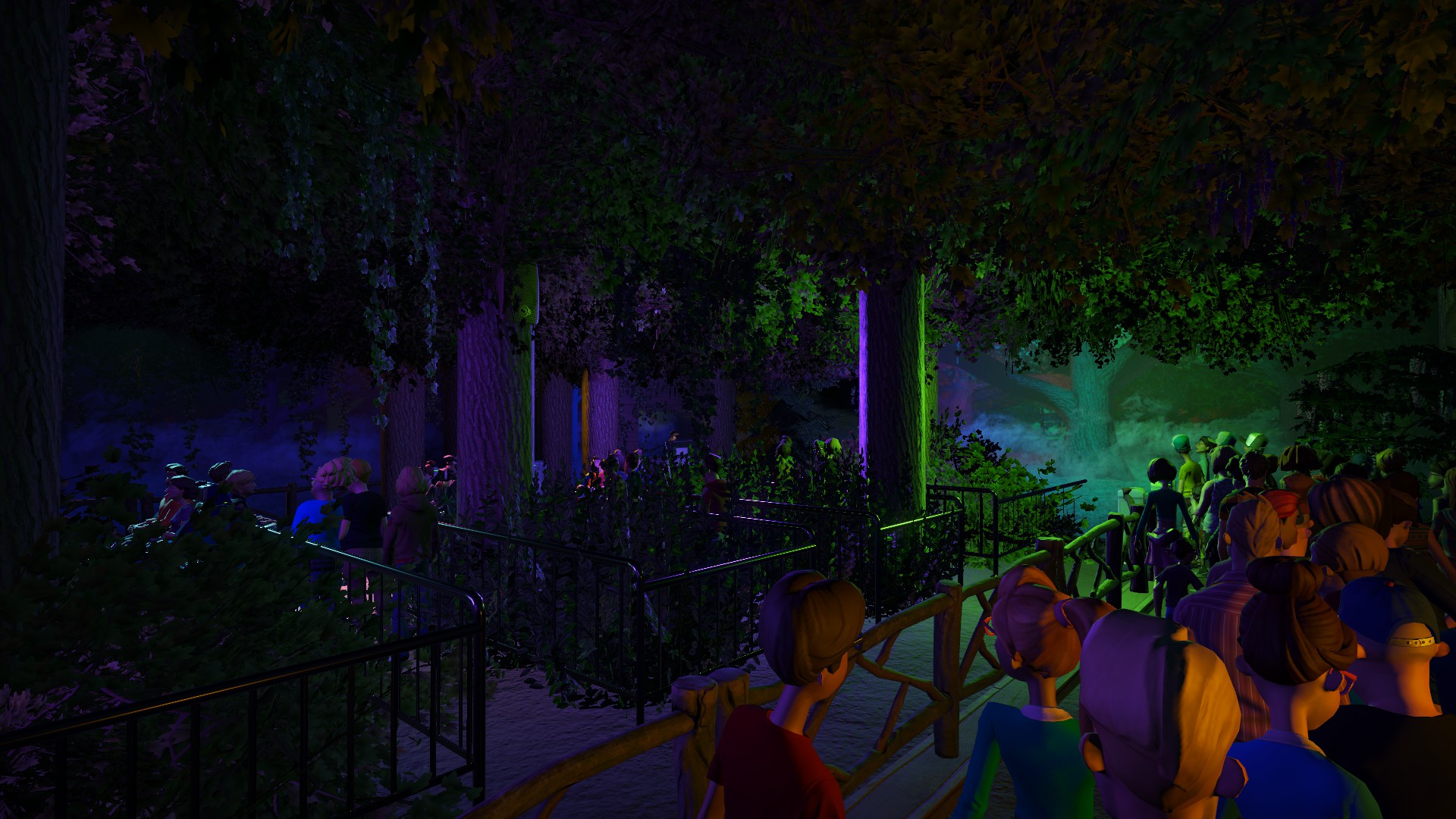 (Between taking the previous screenshot and this one, I'd added some extra lighting to illuminate the back wall better, as seen here) 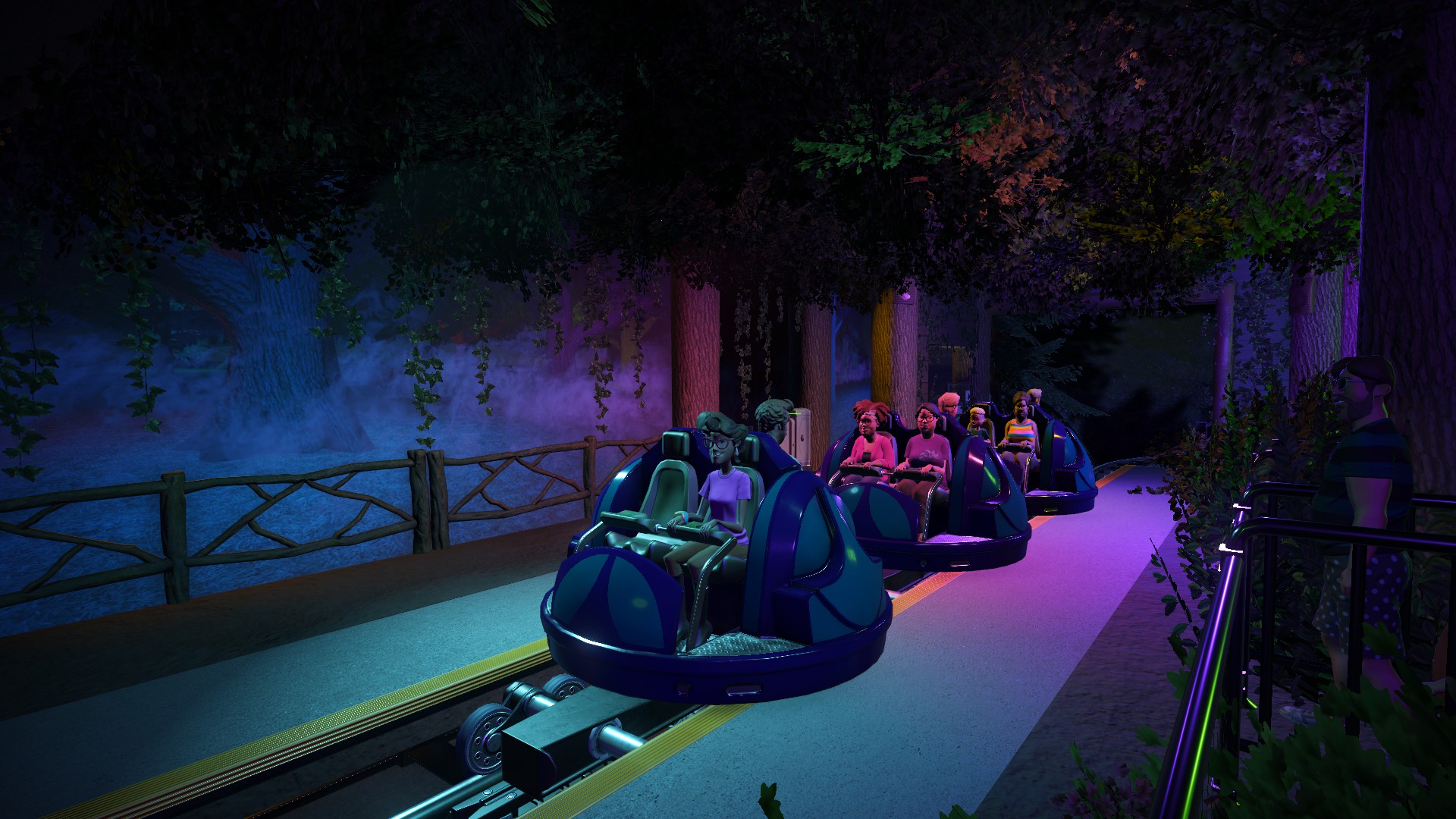 So all in all, I got this done a lot quicker than I was expecting, but at the end of the day it was something I've been needing to do since the Classic Rides DLC and for what it's worth, I'm happy with how it turned out. Even if it's nothing much, hopefully you enjoyed! 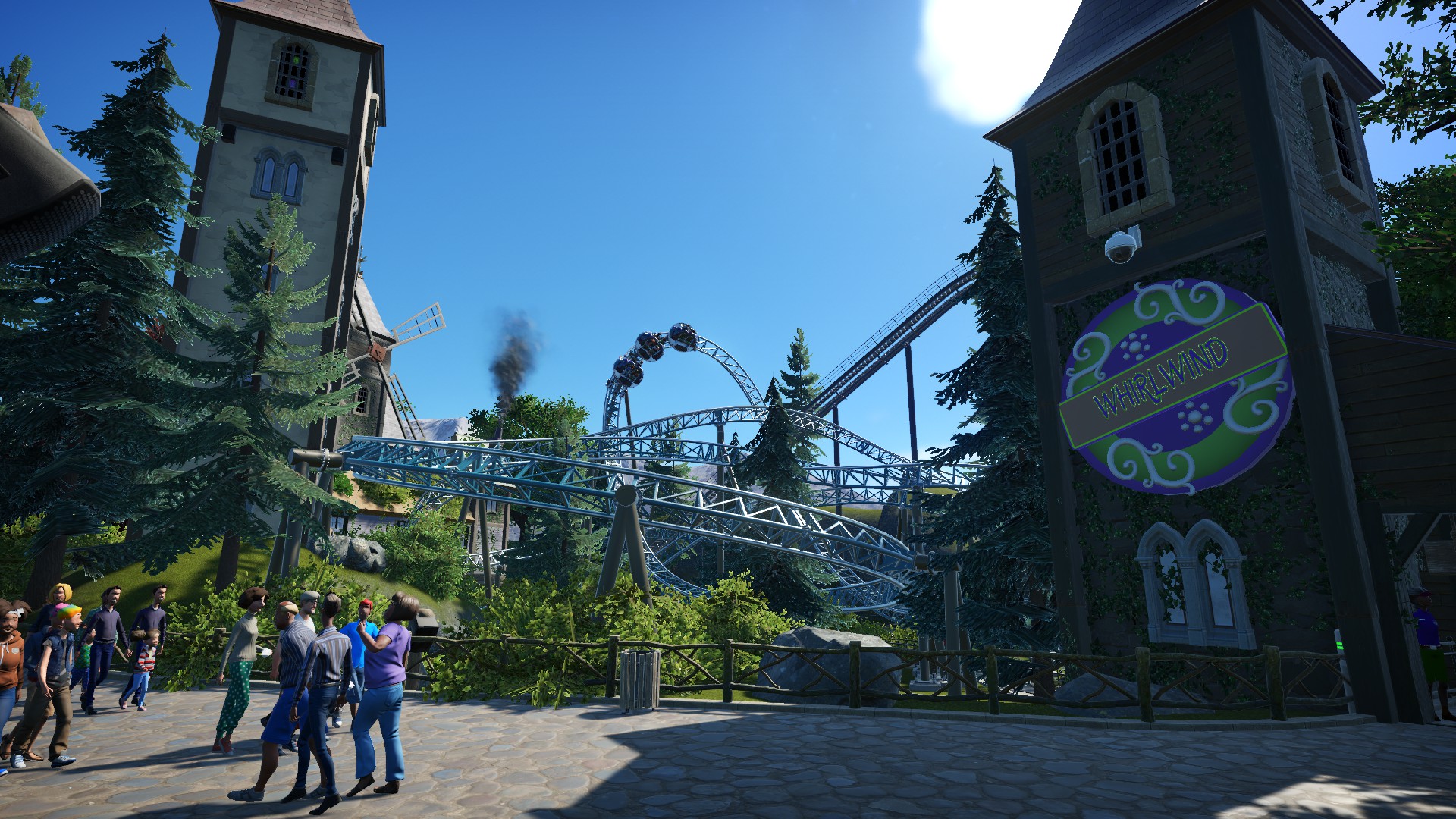