I'll be doing like Arti and posting my projects here in a single tread as work in progress. I think it's a good idea to keep it clean and have a continuous conversation about what's cooking in my little creation lab.
I have been lucky enough to receive loads of comments on the workshop and on discord. My assets have been on the streams many times. I'm overwhelmed by all the love I have received over the past few months. THANK YOU!!!!! thank you so much for all this positiveness. It has become quite precious to me.

Been asked special orders, doing collaborations with other creators like lilibat and pegylac. I've been so lucky. I am NOT a good modeler! NOT at ALL! Most of the assets I made were of the simplest possible kind : box, walls, floors, and flatten circles. Don't even try to ask me some complex model like a character. I'll make you one ingame with basic art shapes! lol! So forget about animations and what not! I found that there's plenty of that on the workshop and I'm big a fan of their work too.

Most of the work I put in is in designing the skins of items = creating original textures and layouts for the bread and butter of planco builders : collections of static assets. I Reaaaallllyyy like stuff that glows and I really love the lighting of the game, so a lot of the assets I do are emissive and/or has some effort put towards the shine/roughness of the assets. I also get somehow annoyed when the ingame items can't be colorable, so I tend to make everything with color slots.... cause we can! I think I have received a lot of love and support from the community and I and so grateful, so encouraged and motivated to create more and make stuff that makes your game fun! That's my thing... I try to make items that are fun to play with ever since I saw lilibat's cathedral. (you must see that if you did not). I try to create pieces that you can create angles and patterns with. Sometimes, that doesn't mean very complex items - look at what has been done with basic shapes! Still, I do things slowly.... test a lot and try to stick with planco esthetics and mindset as much as I can. I have a few ongoing projects :

1- Community homage stained glass and art pieces : this is a tribute to some creations of the community where I turn a screen capture of a friend's BP from the game into an asset. I have started this project at the very lauch of the toolkit to fight against some of the resistance against user-created content amongst some of the most influential creators of the workshop (when the use of the asset was slowing down our games - it was a bad time release stuff!). It's still an open project. But I've been putting more time toward project 2...

2- SciFi - advance civilisation asset collection : the Atlantis collection. This is for a collaboration park on the stargate theme in the dragonian community. I'm making modular assets to be able to build the advance scifi cathedral atmosphere like in the stargate series. Little of those assets are actual replicas, I tried to capture the vibe but keeping them original. I made assets so you could build something like Atlantis, but it can be for cyberpunk or any other high-tech sort of feel.

3- Wanted : those are some other stuff that just happens to be in the conversation... I made lately a spooky stained glass collection using lilibat's drawing of a spider and bat with a new 'spookyfied' finish when the ghostbuster DLC got out. And right now, I'm working on giant magic crystals for a fantasy cave theme, a small collection of maybe 4 assets x 2 sizes.

Love you all, will post pictures of ongoing project in here from now on!
Here a capscreen of the crystals testing site 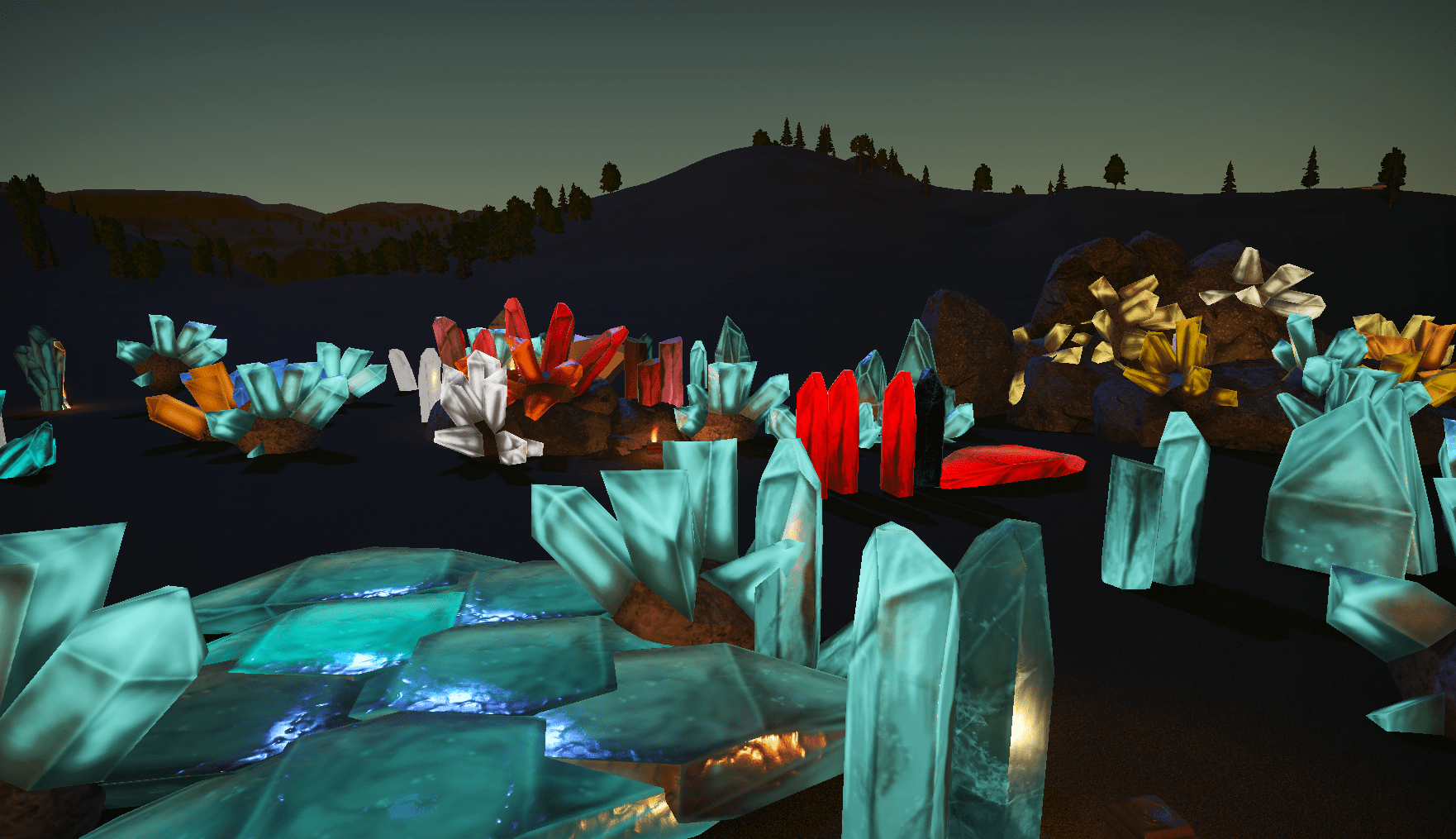 ***edit : the crystals have been released on the workshop. There are 5 pieces in the set so you can mix and match. The set is in this blueprint here, enjoy! : https://steamcommunity.com/sharedfiles/filedetails/?id=1784330720

Love your glassworks. You're meanwhile really a master with more or less transparent textures. The crystal-set looks awesome.

ah thanks @Spanky ! Unfortunatly I have failed, like other creators, to master the GS workflow to make actual glass (hours and hours of trial never gave any good results). I finally made one with translucency that was not bad, but... it's buggy, the game engine don't get the layering quite right when you look at stacks of them. Makes me realy sad, the translucent version looks so good, but I feel I shouldnt release it.... (even tho the bug has nothing to do with the asset at all).Thanks for your comment
Last edited: Jun 28, 2019

All crystals are out, time to go to the next project. It could take a while before I post any new asset on the workshop cause this is kinda of a big one for my little creation powers... lol. I'll be, for the next few weeks, attemting to improve my sulpting skill in Medium VR so I can finally produce something more complex than a primitive shape ! This project will also have it's UE4 counterpart, for the pieces I will create are designed for a game my husband and I are making in unreal engine. The first model - and the one I'm using to improve my sculpting skills - are gargoyles and other monster-theme assets. Since Gargoyle are naturally ugly, I get a little more room to do badly! So far, they are all too ugly to post! In a few days, I should get better.... then, the UV mapping and texturing part will also need some work since exports from Medium VR are not exacly 'clean'. Will post pictures when I get some reasonable results.

Hey From Medium VR on the workshop. It's a fountain head sculpture for a baroque kind of look.This is by far the most complex model I have put out yet.
here it is mounted on a pillar. here : https://steamcommunity.com/sharedfiles/filedetails/?id=1809129661 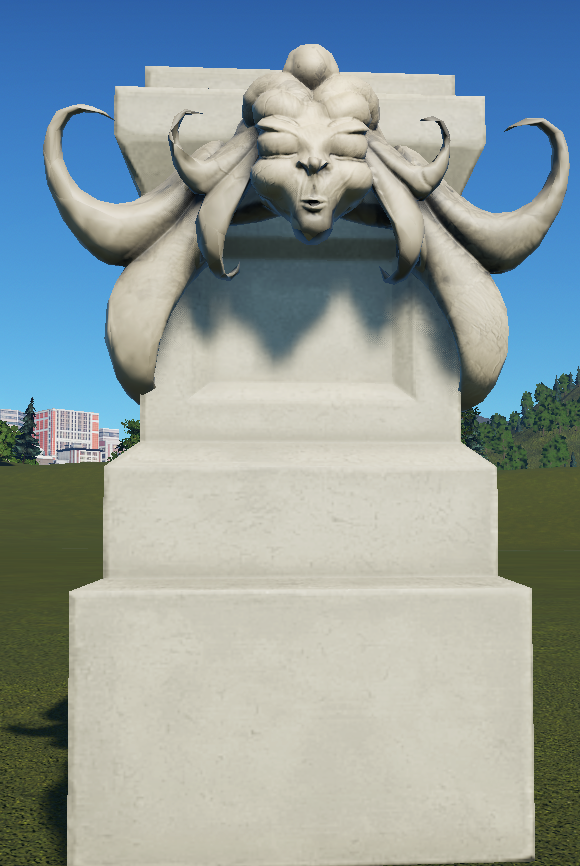 I also put together my evolution while I was learning to sculpt in VR so I could see the progression. here are some of the gargoyles over the course of 2 weeks. The first model is quite aweful! hahaha! 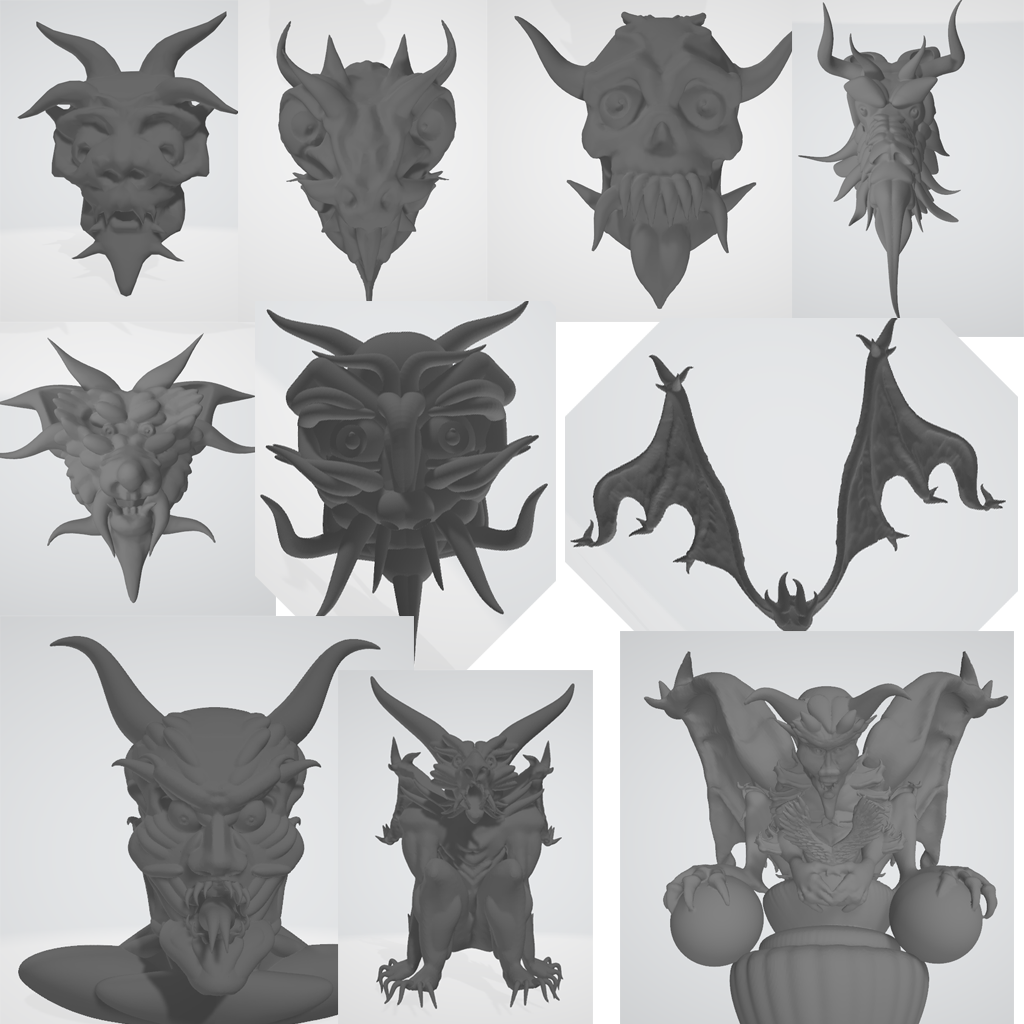 For now I'm facing hardware challenge! I've done some more but I need to work on the process still. So only 2 fountain heads for now. More will come, for sure! I'll keep you guys posted!

A very small collection is out this week too. I have made a submarine porthole and a submarine door with a round window on it. 2 versions for each, one lit and one with translucent glass. Be warned that the translucent workfow is buggy and taxing on your framerate. I recomend not stacking them as that's when the bug apears.... The assets are presented here in a BP I made. about 100 pcs staff room skin. download here : https://steamcommunity.com/sharedfiles/filedetails/?id=1822446691 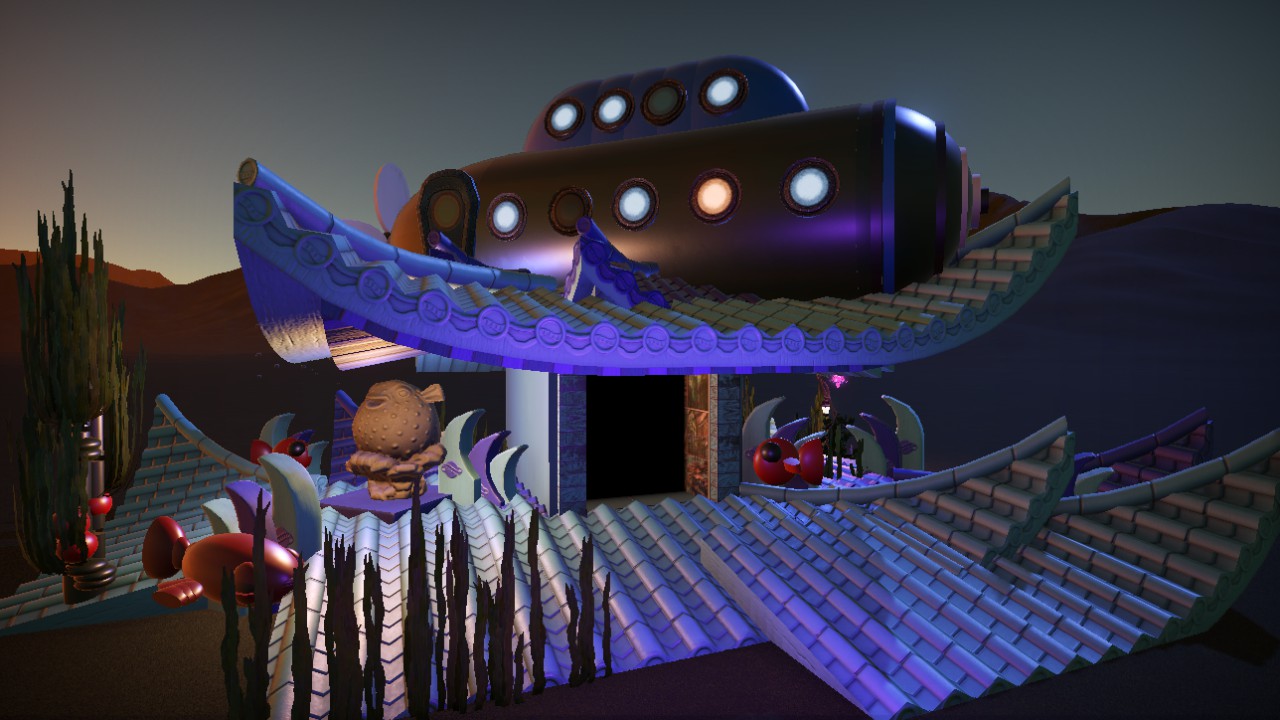 Upadate!!!!! Thanks peeps for all the good comments on the workshop!!! .. and thanks frontier for sharing my creations on social media... quite a few times in the past weeks !

I've been making an effort to get better at medium VR, and I'm proud of a few models I've made so far. 2 models of fountain heads I've sculpted in VR are already on the workshop. One shown earlier and this one :

And I got some more cooking.... I have come to the conclusion that several important pieces of software are missing for this workflow to truly be efficient / or professional: Retopology is a pain, I,ve tested multiple solution... and that makes in turn the UV map process also a pain. Anyway. Here's what I'm cooking right now : 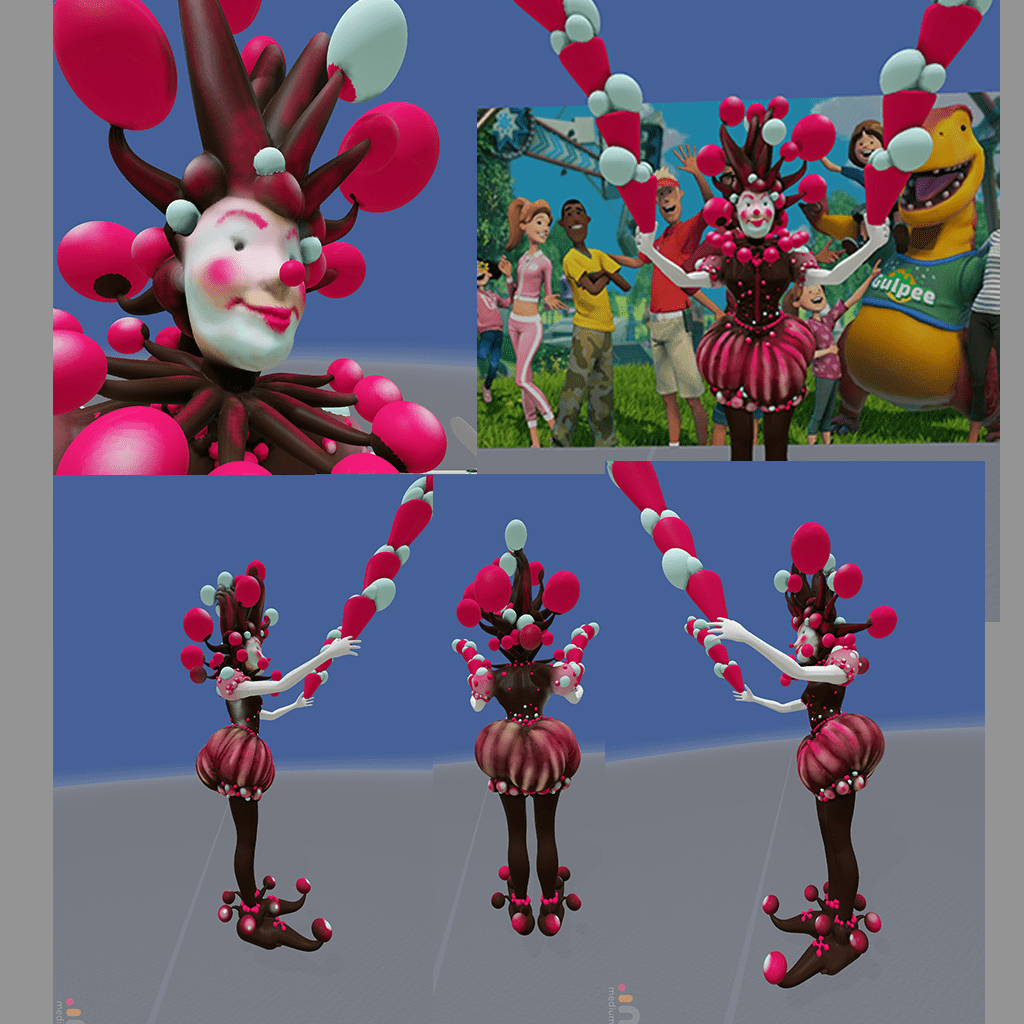 Wow, this clown is great!! He reminds me a little to the fountain figure from the game. Your clown match the whole PlanCo feeling and fits very well with the Vintage Pack.I hope you will import this figure (maybe as an anmatronic??? ) And BTW: If you import this character into the game (no matter, if as statue or animatronic), I would like to request two versions, please ... one with and one without the cones??? Thanks for sharing your work with us.

D
I love that jester! Hopefully you could get it animated aswell!