Scars would be an awesome feature to include 4 our dinosaurs kind of like how we can choose which kind of patterns we want for our dinosaurs when we release them into the park. or another way to implement scars into Jurassic world evolution is when one Dinosaur fights another sometime later scars appear on the Dinosaur and don't go away until the dinosaur dies. 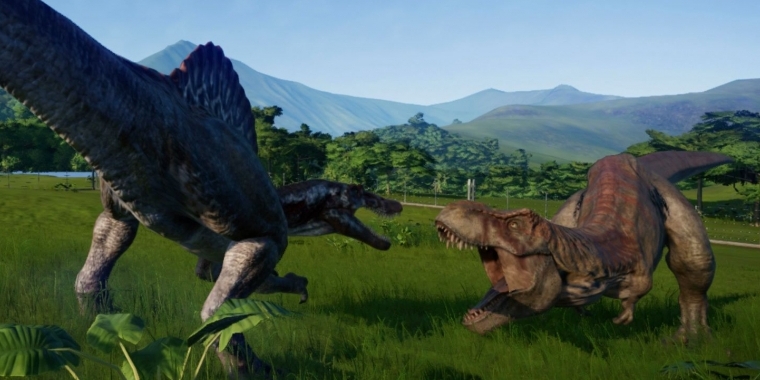 G
Well the way I could see this being a thing is in a similar fashion as the latter. The customization of the dinosaurs in this game is not like the kind you would see in indie games Primal Carnage for example (where you can give the rex a scarred skin option one you get it) Instead, it stays in-line with what the films do by lore to make it more fleshed-out in-universe: “Transgenesis” the concept of taking a gene out of one animal’s genome and sticking it into another’s genome.

So for a game like this, it would make more in-universe sense if it were done during dino battle sequences. Now, because not everyone would want to see scars in their dinosaurs and/or may not want to work hard again to create more that don’t have them after whatever, maybe it would be best if it were done when you don’t heal them manually. Dinosaurs can heal by themselves in-game in different ways (besides “doing nothing” outside of a fight), and the damage textures on them begin to fill out afterwards. So I think scars like you would see in the Nublar rex in the films can only appear when they auto heal when in their “Healing” behavior status, and the scar sizes depend on how much battle damage the dinosaur has received or how much is left before going into that behavior status, just so it gives the impression you are keeping your dinosaurs healthy looking with your ranger teams and what happens when you don’t.

The only remaining question I have here is “can it be done will all dinosaurs that go into combat, or just a smaller handful”? Because there are dozens and dozens of dinosaur models that might take more time to do so.
You must log in or register to reply here.
Share:
Facebook Twitter Reddit WhatsApp Email Link
Top Bottom