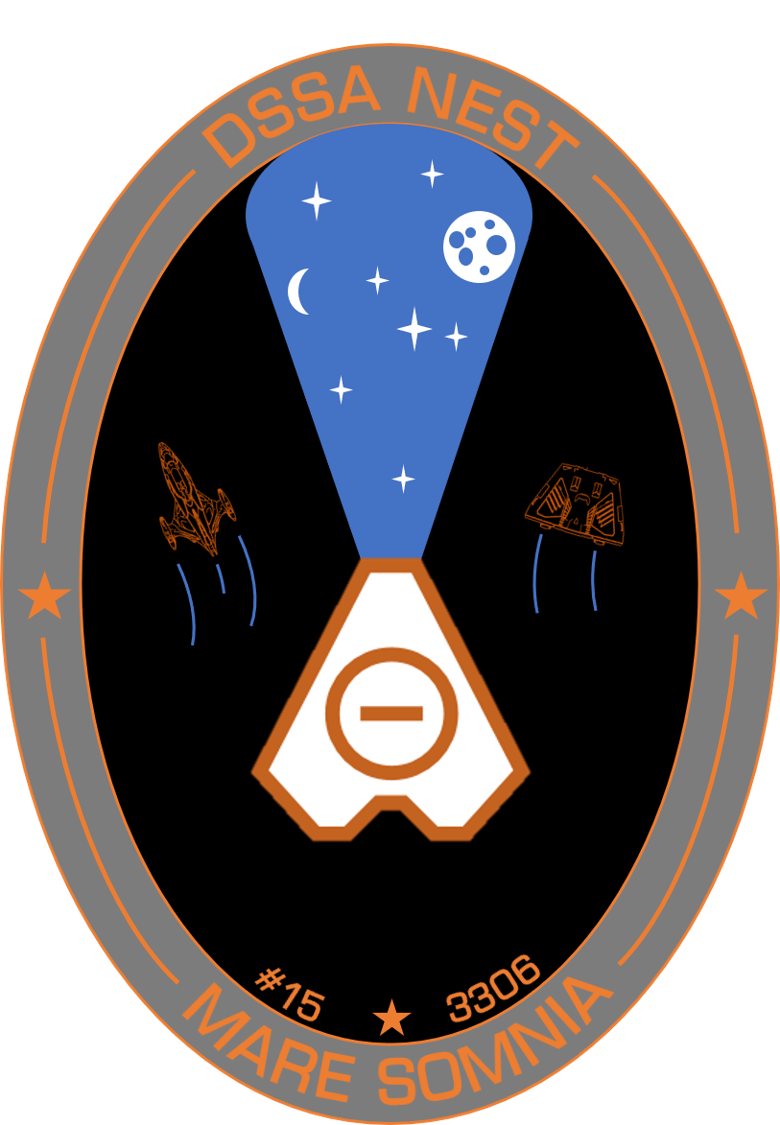 We may be an interstellar species, but we are still vulnerable. Clashes between galactic superpowers and the ever-looming threat of Thargoid incursions into inhabited space threaten human civilization. While the small inhabited bubble at Colonia represents an invaluable fallback point, more is needed. The only guarantee of mankind's continued survival is to spread throughout the galaxy. Our future lies beyond our current borders. In pursuit of this goal, I will be leading an expedition to deploy a fleet carrier as part of the Deep Space Support Array (DSSA) to the outermost edge of the galaxy.

And I can't do it alone.

The DSSA is a first of its kind initiative to develop a network of carriers throughout the galaxy. These will serve as both a respite for deep space explorers, and as staging grounds for the continued expansion of humanity's influence. You can find a comprehensive explanation of the initiative here.

Goals of the Expedition

​
A fleet carrier situated in this location will offer safe harbor to explorers traveling north or south via the popular Sagittarius-Carina Arm, as well as provide an additional base of operations for a more thorough investigation of the region. Usually visited by circumnavigators or those in transit to or from the Abyss or Acheron, very few have extensively explored Mare Somnia.​
2. Scout and map rich tritium reserves

​
Massive amounts of tritium are needed to move fleet carriers any significant distance. We will endeavor to locate tritium hotspots in the vicinity of expedition waypoints to make the journey that much easier for carriers wishing to travel the galaxy after us.​
3. Take part in deep-space mining and carrier refueling operations

​
Large-scale mining operations have rarely been seen far from inhabited space, with at least some infrastructure generally required to make them successful. However, if humanity is going to utilize fleet carriers to inhabit the farthest reaches of the the galaxy, operations of this kind will need to become the norm. Other DSSA carrier deployments are developing techniques and gaining experience in deep space tritium mining. The crew of the DSSA Callisto, stationed in the Arcadian Streams, have graciously offered to act as a refueling waypoint. That far out into the black, it will require substantial collaborative effort to mine the 17,000 tons of tritium required to fill the hold of the Nest. The crew of the Nest is very grateful for their aid.​
Who can join?

​
Anyone. Miners to help with refueling, scouts to find tritium, explorers seeking discovery, sightseers wanting a lift to the outskirts of the galaxy, everyone is welcome aboard the maiden voyage of the DSSA Nest.

The DSSA Nest will depart from Colonia on June 30th at 1500 UTC and deploy via the following route.


On its way to its final deployment system, the Nest will pass through some of the most beautiful and unique systems in the galaxy from stellar remnants to nebulae to the only Helium Gas Giant known to exist outside the Bubble. Upon reaching the final waypoint, we will begin the task of finding a suitable deployment system. Ideally, this system will include tritium hotspots, as many surface materials as possible, and an ELW if possible.

Chat will be available via the DSSA Nest channel in the Fleet Carrier Owners Club Discord server which you can find here.
Because carriers are persistent, you can join on in any game mode and on any platform. However, to more easily coordinate and play alongside the crew of the Callisto, we will playing in the Fleetcomm Private Group. You can find an application to join the group here.

The history of our place in the galaxy is being written, and I encourage everyone to take part. I hope to see you out in the black.
o7

Hi! I'm a fellow DSSA carrier owner (DSSA King's Pass, in the Norma Expanse) and a few friends and I are planning on heading out into the vast reaches of the Mare Somnia, and it just so happens the DSSA Nest is on just the right on the perfect path to pass by! I'll enjoy the trip out there!

King_INF3RN0 said:
Hi! I'm a fellow DSSA carrier owner (DSSA King's Pass, in the Norma Expanse) and a few friends and I are planning on heading out into the vast reaches of the Mare Somnia, and it just so happens the DSSA Nest is on just the right on the perfect path to pass by! I'll enjoy the trip out there!
Click to expand...