did a bit of exploration in the Galactic East, went out around 2000 ly, and found a lot of nice things there, many of them first discoveries, including 2 ELWs!

But this thing here is impressive:
A ringed Class V Gas Giant near a Type G star, orbits only 8.5 ls from its star! 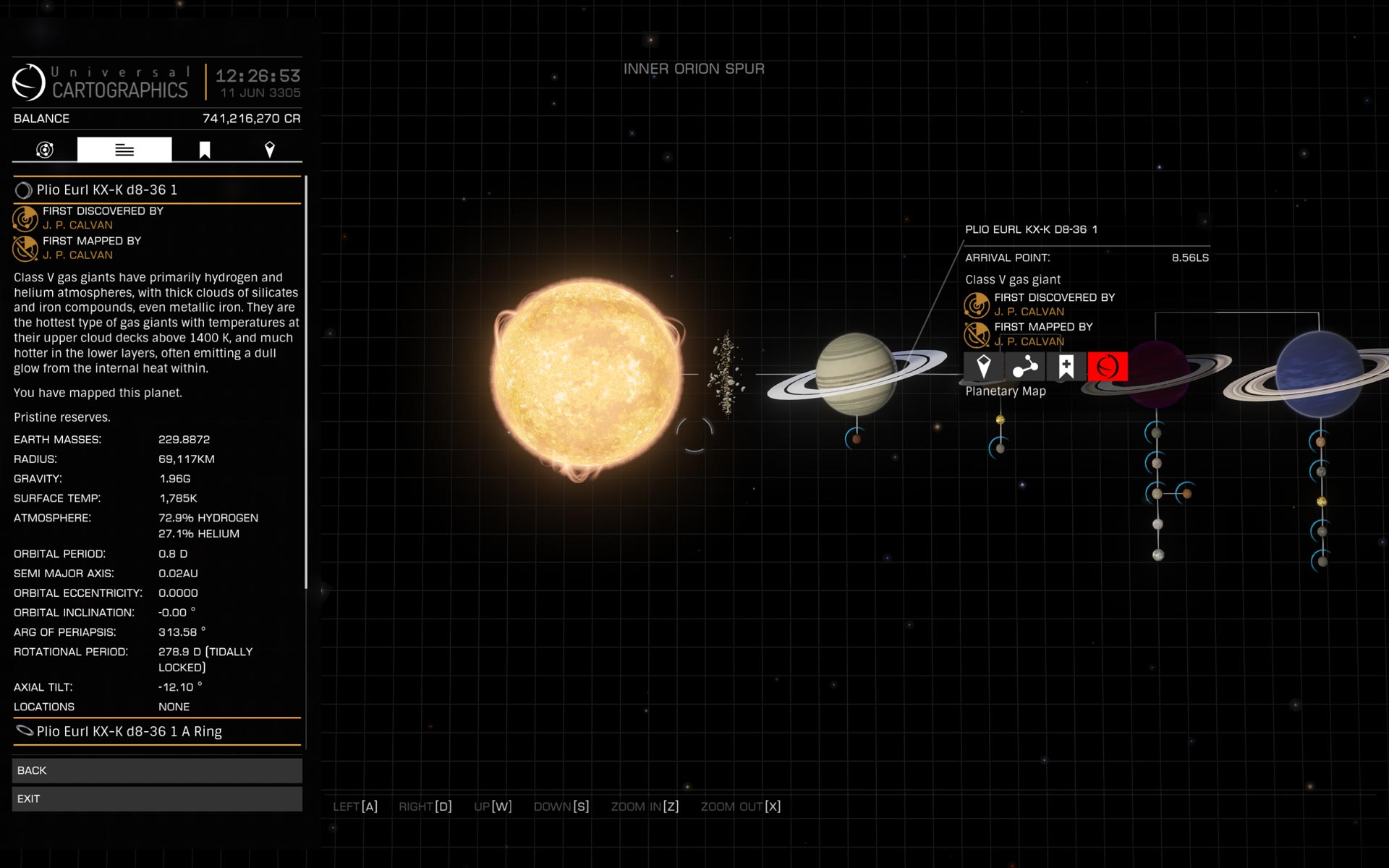 After arrival this looks this way: 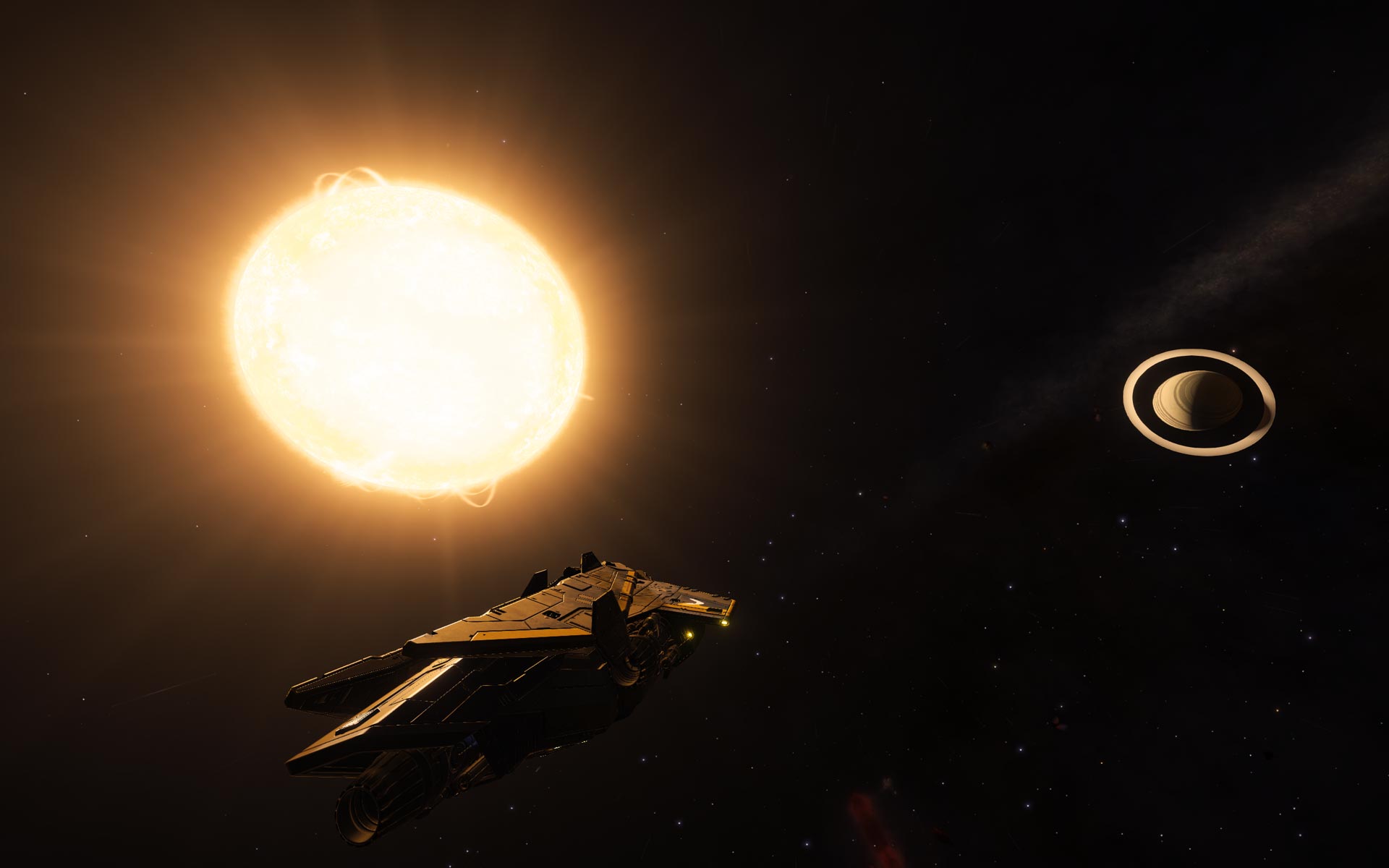 As you can see there is a very small moon orbiting the Gas Giant just outside the rings, landing on it gave this nice picture: 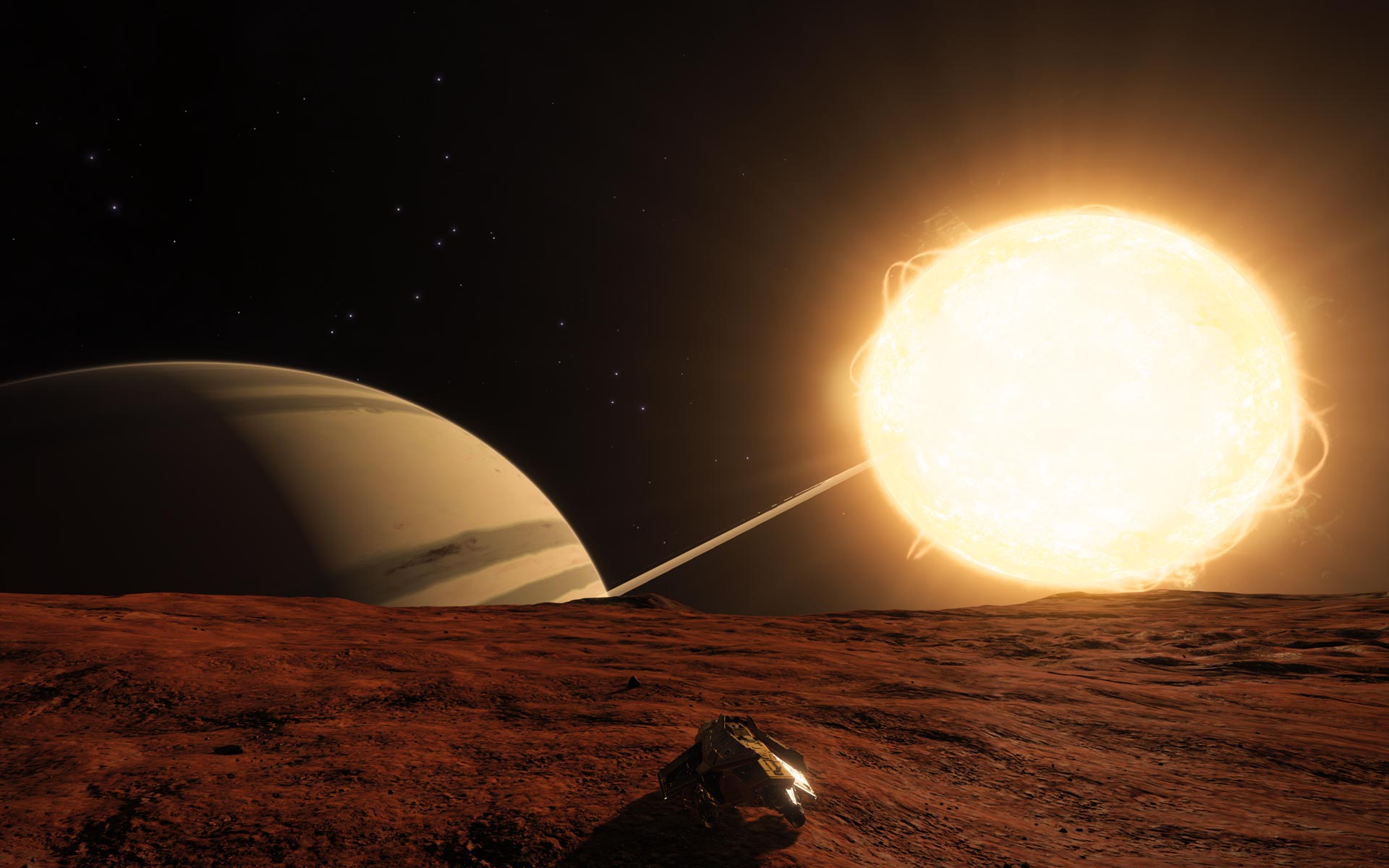 Not that I would like to try that in real life

The star as a class G has around 6000 K on its surface and it fills a good part of the sky. Sunburn is a given - hehe.

Wow. With an orbital period of 0.8 D there should be some rapid movement here. Did you see it when landing on this moon, or perhaps from the inside of the gas planet's rings? Would really like to see a video of this scenery...

There are still nice discoveries to be made close to the bubble but explorers seem to have taken the old wives tale that it has all be discovered and simply jump jump jump past the first 500-3000 ly. Not me, I take a look on the way out and on the way in. The ship isn't gonna implode because it stopped, even for just a moment, to check out the scene.

I absolutely love "Hot Jupiters". Congrats on finding a nice one! These are sort of a personal favorite of mine.

The official definition in astronomy for a "Hot Jupiter" is for it to have an orbital period of 10 days or less. But there are some in the ED galaxy that are a little outside of that, and still quite scenic. Anything under 30 ls makes me smile, but even better when it's under 15, or under 10. At 8.5 ls and 0.8 days orbital period, and with rings, that's a nice find!

If a Class V giant is going to appear around a type G star, it's always going to be close - real, real close - because Class V giants need to be really hot. Class V giants around stars of type G or cooler are quite rare. In my survey of 200 type G stars in the Thraikoo sector, I found two Earth-likes and 3 water giants, but not one Class V.

The landable moon in this system is just the cherry on the top, allowing for some great screenshots. Almost unusual enough to nominate as an EDSM POI, perhaps?

picommander said:
Wow. With an orbital period of 0.8 D there should be some rapid movement here. Did you see it when landing on this moon, or perhaps from the inside of the gas planet's rings? Would really like to see a video of this scenery...
Click to expand...

Did not see it, even landed on the planet. But maybe I overlooked it. It is not very noticeable, I think. 0.8 days = 19.2 hours, this means 18.75 degrees per hour, and 0.3 degrees per minute. If you watch for it, you should see something.
You must log in or register to reply here.
Share:
Facebook Twitter Reddit WhatsApp Email Link
Top Bottom