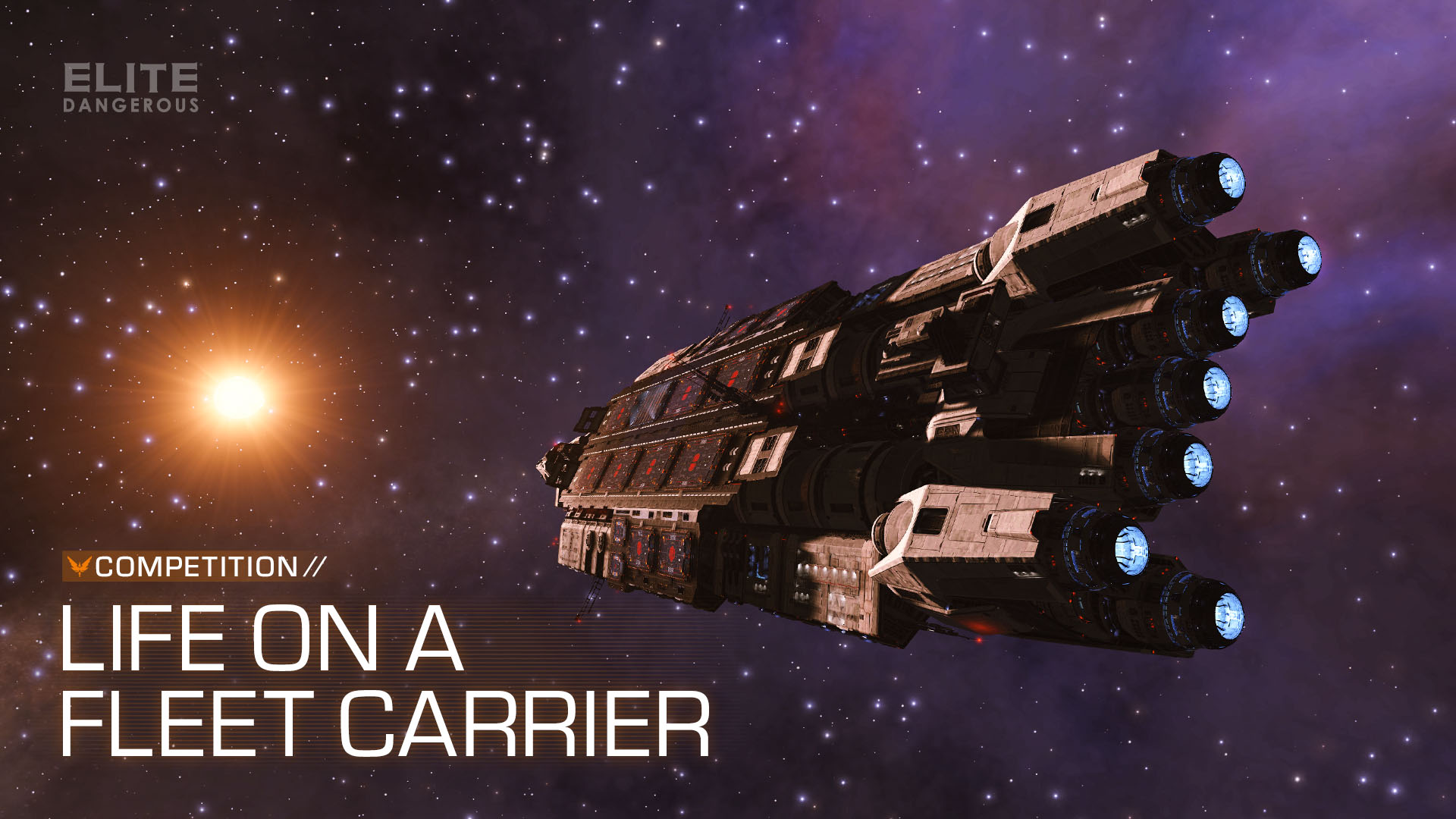 We'd like to kick things off by giving a massive thank you to everyone who entered our Life on a Fleet Carrier competition - we loved watching, reading and listening to all of your submissions. Earlier today we hosted a special livestream to announce the winners which you can watch it back on our Twitch channel. For anyone who missed it or would prefer to read about the winners, see below! 1st place in each category will receive a 25,500 ARX pack and 2nd and 3rd place will receive a 8,400 ARX pack, with one overall winner also receiving an X52 Pro HOTAS controller.

In the Other category, our winning commanders were as follows:

2nd - CMDR Aaron Chadd - a scene from an upcoming part of their Elite Dangerous theme animated series which you can find on https://www.dreadnaughtcnv301.com

3rd - CMDR Jett Brawndo - a Fleet Carrier themed folksong which you can listen to here: https://soundcloud.com/user-194774595/ss-friendship

1st - CMDR Darkhands - a hilarious first-person perspective of a mechanic aboard a Fleet Carrier. Aka, 'Mechanic Man' (LINK) on YouTube, CMDR Darkhands is also our overall winner who'll receive the top prize of an X52 Pro HOTAS controller!


2nd - CMDR Spatula 007 - creator of the Elite Dangus series, creates a short where the good detective struggles to navigate his way around the massive vessel.


3rd - CMDR Universallaie - another comedic skit where an authority vessel is sent to apprehend a Fleet Carrier on behalf of a local station.


Make sure to check out each of these winners' channels to see more of their content!

After 6 days I came to realize that life on this big boat is very different from the one before it. All I had was the stars and the infinity around. But now there are other things populating my sensors.

People. Lots of them.

And that is in fact a “commodity”to some CMDRS but what I mean is another thing. These are not mechanics or cleaning support crews that open a commercial smile when you dock your broken ship after a Pirate unfriendly negotiation. You can see in their eyes that it’s just business. I mean another approach here. These are employees – and their stories of life. For the first time in my life I have a whole lot of people counting on me – depending on me – to make something work – and even though they’re payed for it there is always the human effect here and there.

Yesterday there was a Keelback who arrived here that could barely fly. The hull was all messed up and modules looked like they’ve been butchered out. It was a mess. And since I like to be on the top of things here I left the repair team comms channel open in my office and according with the parts that the mechanic asked that was no ordinary Keelback. I know a work of an engineer and the words “Selenium” and “Proto Heat Radiators”are a massive tip on it – especially when the Mechanics logs shows Plasma Accelerators on a Keelback. This Pilot have been in Turner’s place (no problems with that) but the thing is: the CMDR Profile showed that it was a Novice CMDR with no bounties, crime records or System Permits. A nobody with a Kellback that was very very special. The pilot’s ID on the Federation said “Agatha Freelance”. Novice. Clean. The ship’s log on last docking on registered bases are 412 hours ago. A Novice Pilot flying for more than 15 days straight coming from a Anarch System? This smells wrong.

I called Hernandez (from security) so we could take actions. He compiled but without understanding my orders. I also issued a lockdown at Docking and Departure session. Again I was not understood.

At the StarDrinks Pub I told Hernandez to restrain the pilot. Rene Treston (true name) was arrested and we got a CR$ 941.000,00 credit bounty on her arrest. The crew asked how I knew it and the answer is simple: if you want to meet Turner you just can’t go there and ask for Bill. Among other things you need a permit to get to Alioth. The crew was awed. Couple of beers later and I was telling them some stories and adventures I lived before becoming a Fleet Carrier CMDR. Good times. From that moment that my crew started to look at me in a different way. I was no longer “the owner” or “the boss”. I was CMDR Muna’s – and this is my Fleet Carrier.

Avivit was an eight year old child. She lived on the carrier, Renegade. Her home was a state room on the sixth deck, with one wall size window that provided a grand view of space. Avivit lived with her father who would routinely take on missions to protect other commands in hostile areas. While away on a mission Avivit always wore her fathers flight jacket with pride despite it swallowing her small body.

The alarm blared over the intercom which indicated a hyperspace jump was imminent. According to Avivit the alarm sounded like a whale grunting. Security shutters closed over the room window while klaxon lights baked everything in a red color. Avivit reached out to stabilize her null-G drift against the support beam that ran perpendicular to a bench. Avivit pulled herself into the bench and secured the five point harness across her body. Her small legs floated carelessly away from the seat as she wrapped her arms around the support beam. She rested her cheek against the cold pillar as she waited for her favorite part of the jump.

The entire carrier made a series of metal expanding groans as the engines spooled up to full power. Meanwhile the robotic voice over the intercom counted down the departure.

Like the calm before a storm, all the sounds and vibrations of the carrier fell silent for a moment while Avivit held her breath. The anticipation she felt was palpable. Soon the silence was broken as the carrier shook, and rumbled. The carrier trembled with power, which was translated into her shaking body like some sort of carnival ride. Avivit's little fingers griped the beam as she joyfully squealed out. Her voice vibrated in unison with the carrier.

With an ingressive sound the carrier stopped shaking and entered hyperspace, the ride had ended. Avivit calmly pulled away from the pillar, and placed her hands neatly into her lap while she waited for the journey to complete.

The trip ended and the carrier returned to normal space with a boom. The security blinds retracted, and the red klaxon lights faded back to a warm yellow orange hue. Avivit looked up to the destination display in the room that indicated the carrier had arrived in the Deciat system. Avivit rushed to unlock her harness and pushed off the bench. Avivit quickly floated out of the room while she slithered her way through other passengers and employees that infested the maze of passageways.

She finely arrived to the hangar bay viewing port her father departed from.

Avivit pounced up to the window and waved vigorously at the Viper Mk III ship sitting on the docking pad. The ship was painted with a snake wrapped pink skin, her favorite color. Her father looked up with his typical coy smile and returned a two finger salute just before the Viper lifted off. Avivit watched her father join up with the ships he was escorting as they headed to the nearby planet.

3rd - CMDR Saturn5Rocket05 - a Commander orders his Fleet Carrier to make a jump.

I awoke in a brief state of panic as my alarm clock shrilled its high pitched tone for the whole galaxy to hear. It was 7:30 in the morning. I had to prepare for another day of hard work on board the Armstrong Fleet Carrier, owned by the Brewer Corporation. I was the commander-in-chief, liable of scheduling jumps, managing Tritium consumption and controlling finances. It was a Tuesday morning, and so we would be preparing to jump the carrier to the star system Bellite to refresh our Tritium supplies.

We had several mining ships pre-docked at the carrier, primarily Pythons with the occasional Adder and Hauler. It was important that we kept the supplies topped up otherwise we wouldn’t have enough fuel to travel.

I left my room to be greeted by the Tritium Depot manager, Guy Simmons, with a nervous look on his face.

“Are you sure that we can run the mining run today,” he exclaimed, “or are you forgetting how many fatalities we had last time?”

The last time that we had sent off a mining crew to extract Tritium, our forces were overrun by pirates. 4 people died and dozens more were injured. We didn’t have the weapons capacity to defend against them.

“You worry too much, Guy!” I replied, “We have multiple system security units on standby in case it gets a bit rough down the road.” This appeared to reassure him as he gave a minute smile towards me before returning to his post.

I walked briskly towards the entrance of the bridge, my mind buzzing with anxiety as to what the outcome of the mining run would be. As I approached, the doors slid open with a brief puff of pressurised air from the hydraulics. Lay before me was the command deck of the carrier with oodles of crew members milling about, almost enough to make the room burst at the seams. I pushed through the mass of people to my command chair. I sat down and reached for the intercom.

“Attention all carrier crew, report to your stations and prepare for hyperspace jump.” I blared over the intercom. The clump of crew members quickly dissipated and I could finally see out of the window.

“Begin landing pad lockdown” I stated to my fellow crew members on the bridge. The commander for ship safety promptly pushed a button on his panel. Following this, a blaring alarm resonated around the ship, subsequently followed by an automated announcement that resounded throughout the intercom.

“Attention – carrier has entered pre-flight lockdown. All services have been suspended”

The whirr of the motors that retracted the pads was deafening. I could barely hear my own voice.

Thanks again to everyone who entered! We still have plenty of entries that we'd love to share so you can expect to see more of those in the coming days and weeks. Once again, a huge congratulations goes to our winners! We hope you enjoyed the competition and look forward to seeing the other entries we received over the coming weeks.

Congratulations to all the winners.

And the picture in the post is really superb.

Ow no... I wanted that hotas so much :/ congrats to all winners !

Wow thank you all so much!

Awesome competition, thanks for having something to stir up the creative juices! And thanks for selecting my Dangus too!

Also @Darkhands that mechanicman video had me on the floor laughing and was so well done, congrats on a well deserved grand prize!! Congrats to the other winners, great stuff all around.

Very (!) nicely done and very creative use of what was possible!

Wow @Darkhands you're really gifted. This video was awesome!

Great videos and fantastic writing. Really excited to have taken 2nd! Congrats to @Darkhands I enjoyed watching that!

Huh. Well that was unexpected.
I had no idea who won until I accidentally stumbled across this post.
Will winners be notified by email as to what actions are required to claim prizes? 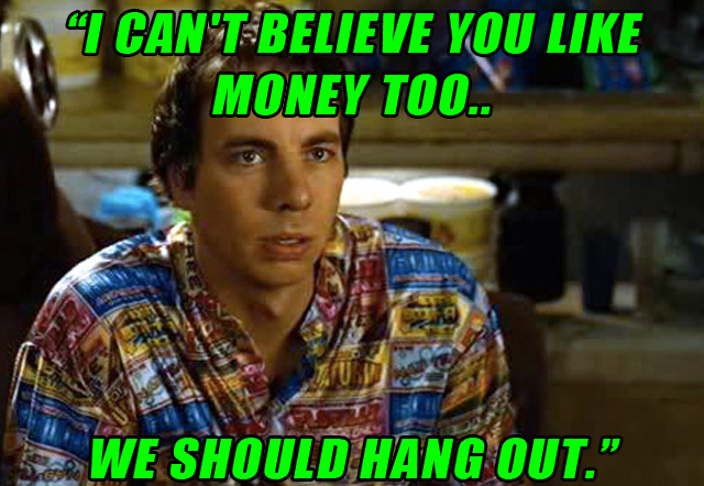 wetwire said:
Huh. Well that was unexpected.
I had no idea who won until I accidentally stumbled across this post.
Will winners be notified by email as to what actions are required to claim prizes?