I'm ok with this, but first I want a Monster Truck DLC and a Alien Invasion DLC.

Also the mentioned Species aren't really mythical. I think a mythical DLC would instead have Dragons and Unicorns. It would be funny to be the first Zoo in the World that keeps a Bigfoot but I think if they would make such a DLC I would maybe buy it but most likely almost never use the Animals. I think it would be better as some kind of unlockable Easteregg Animal(s) instead of a full DLC
Last edited: Jun 30, 2020

LillidarAn said:
Yes it does... same is with the arctic pack, when you dont like the animals... Just don't buy it.

It's not entirely about the species of those DLC but more about the type of DLC.

But DLC that a lot of people don't want, personally don't like to see their time wasted on those.
If you have 1 or 2 bad DLC in a row, most people will never buy anything.

An attitude like: don't buy what you don't like is something you don't want as a community thought -> most people tend to stay away from the game at all.
Maybe it could be 1 animal in a DLC you don't like, but when it's 4 out of 4 - that means they really made a poor choice.

B
Personally, I wouldn't want mythical creatures either, cause I don't feel they would fit in PZ's realism. I remember the ZT2 days and the extinct animals pack for it. I liked it, but never had the Dinosaurs in my zoos that came with this pack. I liked it for the "recently" extinct creatures, like the Thylacine and the Dodo and yes, it was also fun to build a "Pleistocene Zoo" with Smilodons, Mammoths, Cave Lions and so on... But these animals still have the "animal bonus", as in "they definitely lived once and were not that oversized and far back in time as dinosaurs" (If I wanted to have Dinosaurs now, I'd buy Jurassic World Evolution). But honestly... as for mythical creatures... I'd feel rather uncomfortable putting some Mermaids and sparkling Unicorns in my zoo.

I mean, as for Mermaids... Frontier could make a compromise and give us a Sushi Lunchy right next to the Pizza Pen. And as for Unicorns... the Przewalski Horse doesn't shet rainbows, but it really fits better in the game, cause with sparkling rainbow crap and no big turds to vacuum my zoo keeper would be unemployed!

Why do I make statements like: first other animals have to come into play, then fantasy, not quite understandable? Well I think we all agree on this point that many real animals are missing.

And I assume that it could of course also be wrong that the subject creator, whether here or elsewhere, would like to have such a DLC at some point and not immediately.

I suspect the subject creator might also want meerkats, seals or something similar. Since the selection of animals is still very clear, if you leave the vivarium animals aside.

There are such and such unicorns, not all poppy rainbows.

The last unicorn definitely didn't poke rainbows. And I don't know from Frührer that unicorns blew rainbows in stories.
This is rather this modern fashion unicorn, which I can do without.

There weren't all animals in the game, and I think both games sold reasonably well.

And they were also very realistic. Actually, no prehistoric or fantasy animals would have fit in there.

I don't know what Frontier plans to do in the next few years, but I'm not going to speculate.

I express my wishes or support the wishes of others that I think are good. Frontier does the rest ...

... and who knows, there will be mods at some point that do not replace other animals, but only add and then there may be unicorns, dragons, mammoths, saber-toothed tigers and dodos.

I would also be happy with that.
If not, I will of course survive.
I just like the game and hope for many, many, many animals.

LillidarAn said:
Yes it does... same is with the arctic pack, when you dont like the animals... Just don't buy it.

In some zoos you have a walkthrough with dinosaurs (fake of course) or a small section with mythical animals and i know lots of people love that. There are also lots of people who make fairy like zoos, so lots of people would like to have this (also given by the number of downloads from the mods with zt2).
Click to expand...

The don’t buy argument most definitely does not work for a thread on expressing opinions surrounding future dlc. Not getting something that you could enjoy because Frontier went a route that many did not want is most certainly a loss. Is it the end of the world? No, but to claim a win:win is unrealistic. It would not be a win for many to sit out a DLC on a game they really enjoy. They would save ten bucks, but they lost out on a chance to have a DLC they wanted.

And yes, people make fairy tale themed zoos. I have one zoo that is The Library of Alexandria and it splits out into different sections based on book genre’s: Fantasy: Sci-Fi, Realistic Fiction, and Mystery/Horror. Those are all possible to build with normal DLC’s. I don’t particulalry need aliens for my Sci-Fi section.

People are just expressing they would be disappointed to get such a DLC. I would not buy such a DLC and would consider the DLC a loss, although minor.

Dienstbier said:
There weren't all animals in the game, and I think both games sold reasonably well.

And they were also very realistic. Actually, no prehistoric or fantasy animals would have fit in there.
Click to expand...

The first 2 Zoo Tycoon Games had extinct Animals. The first one also had a Cheat that allows the Player to get Unicorns. There was also a Mermaid Easteregg in the Marine Mania Expansion of Zoo Tycoon. Zoo Tycoon 2 had a fictional extinct Species: The Killer Penguin

I'm cool with someone expressing their wishes. I hope a lot of people who agree with OP, also join in.
I think it's a good sign to have both sides of the story. If the overwhelming majority would prefer mythical animals, they should add it.
I would still disagree with this, I don't think it fits the theme of the game, but I just have to accept it. (a more "the needs of the many, outweigh the needs of the few" vibe)

Most times I post in such topics because i don't like this suggestion and we had some moments where Frontier made changes into something we didn't like. I think it's way more productive to have this discussion before they actually spent time on this.
Back in BETA a lot of people thought animals breeded to much with too many offspring, I was fine with the breeding-feature. So I didn't comment on those threads. They changed it because people complained. Which actually caused more people to complain about the change in breeding. The last couple of days of the Beta wasn't any fun because of this.
Therefore, I think it's wiser to comment.


Dienstbier said:
Was there such a discussion at ZooTycoon or Wildlifepark?
Click to expand...

Internet/gaming has changed a lot since those days. But also a lot has changed in the last 5 years. I don't think you can compare.
There were no competing games back then. I greatly enjoyed the Marine Mania but Prehistoric a lot less. I did like Jurassic Park genesis.
Don't like the idea of extinct animals (various periods) in PZ, but excited for Prehistoric Kingdom.

Exactly those had such games .. yes I was disappointed by the extensions, because many animals had no text ...

But it was nice games anyway ... I still enjoy playing WildlifePark 2 and 3.


And I like those saber-toothed tigers ... and the unicorns at ZooTycoon, they were so beautiful ...

But unfortunately I no longer have ZooTycoon parts. No idea where the CD got from and whether the game would still run under Win10.

Unfortunately, you cannot buy them on Steam.

I have not yet played ZooTycoon Ultimate, which irritated me with the finished enclosures.


I think it's good when other views are posted, only I find some homicide arguments strange and that some vehemently reject them, or there are people who even say that they no longer play the game as a result. (in other topics)

Or if you make fun of others' wishes, as has already happened on one or the other topic. I don't think that's correct.

You can definitely take your opinion that you don't want such animals, whether orcas, dinosaurs or fantasy creatures ... but decently. I sometimes miss that in forums.

I was delighted that Frontier, for example, found a middle ground at the time, even if there were such extreme countervotes.

It's not the best for me, but I'm much happier. And I think even if someday, for some "unwanted" beings it will make it into Planet Zoo, it will certainly be the same for others.
If maybe it's not the animals that inspire, but maybe components, or something else out of the pack.

Yes, I am aware that a lot has changed in recent years. The worst are these extreme mistakes in new games.

I I thought deeply about unicorns and rainbows. At least, it could reduce a problem we all have.....to much animal poop. 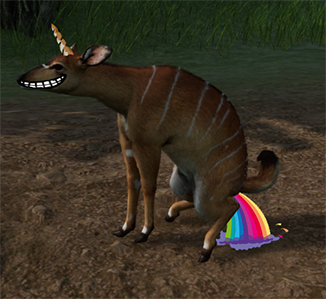 As already said by a number of people, there are still way too many interesting/unique living animals that are not in the game and would fit much better with the theme of it.
Given that DLCs are coming out every 3-4 months and not every month, wasting one DLC slot for something like this would be a great loss for me.
A massive amount of birds (including flying ones preferably), diving animals, dozens of terrestrial and arboreal animals, petting zoo animals and even recently-extinct animals. Once we have all that I'd be happy to see mythical ones being included.

The only extinct DLC I would be ok with would be species that were lost from the Age of Discovery onward, so roughly four hundred years. Anything older, like mammoths and woolly rhinos would not be ok even if they coexisted with humans and humans contributing to their demise.

Mythical animals on the other hand are entirely a no-no for me. Even fictional color morphs for existing species in the game.

I think mythical animals won't fit in with this game. Perhaps another game on its own.

A
I think there are so many more wonderful real life animals to be added before considering mythical or extinct species. I mean I would consider thinking about them if we have more than one thousand animals on the roster
You must log in or register to reply here.
Share:
Facebook Twitter Reddit WhatsApp Email Link
Top Bottom