R
I thought you released the park but now it’s not on the workshop. But if I subscribed to it already it should still be in my subscribed parks. 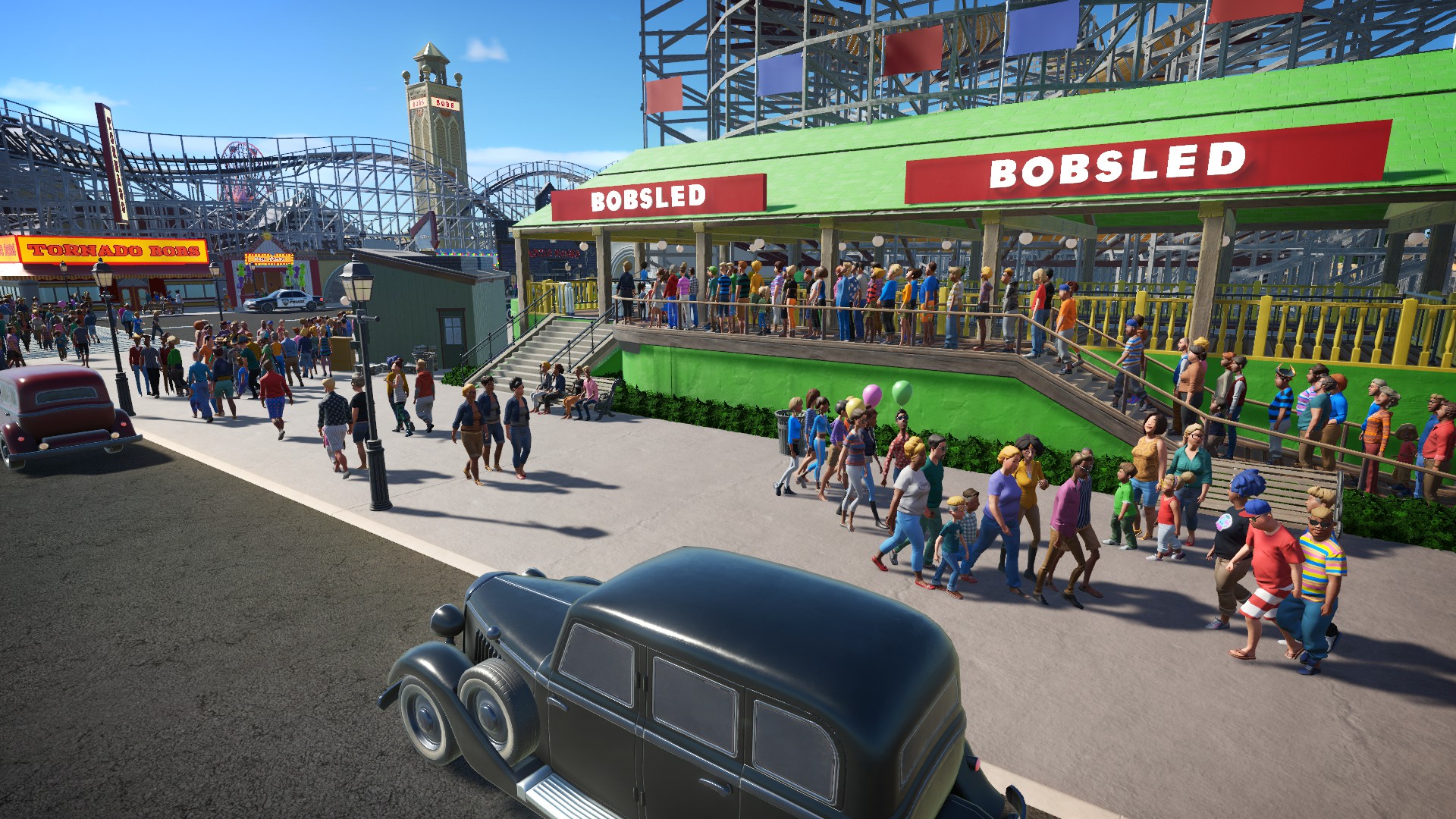 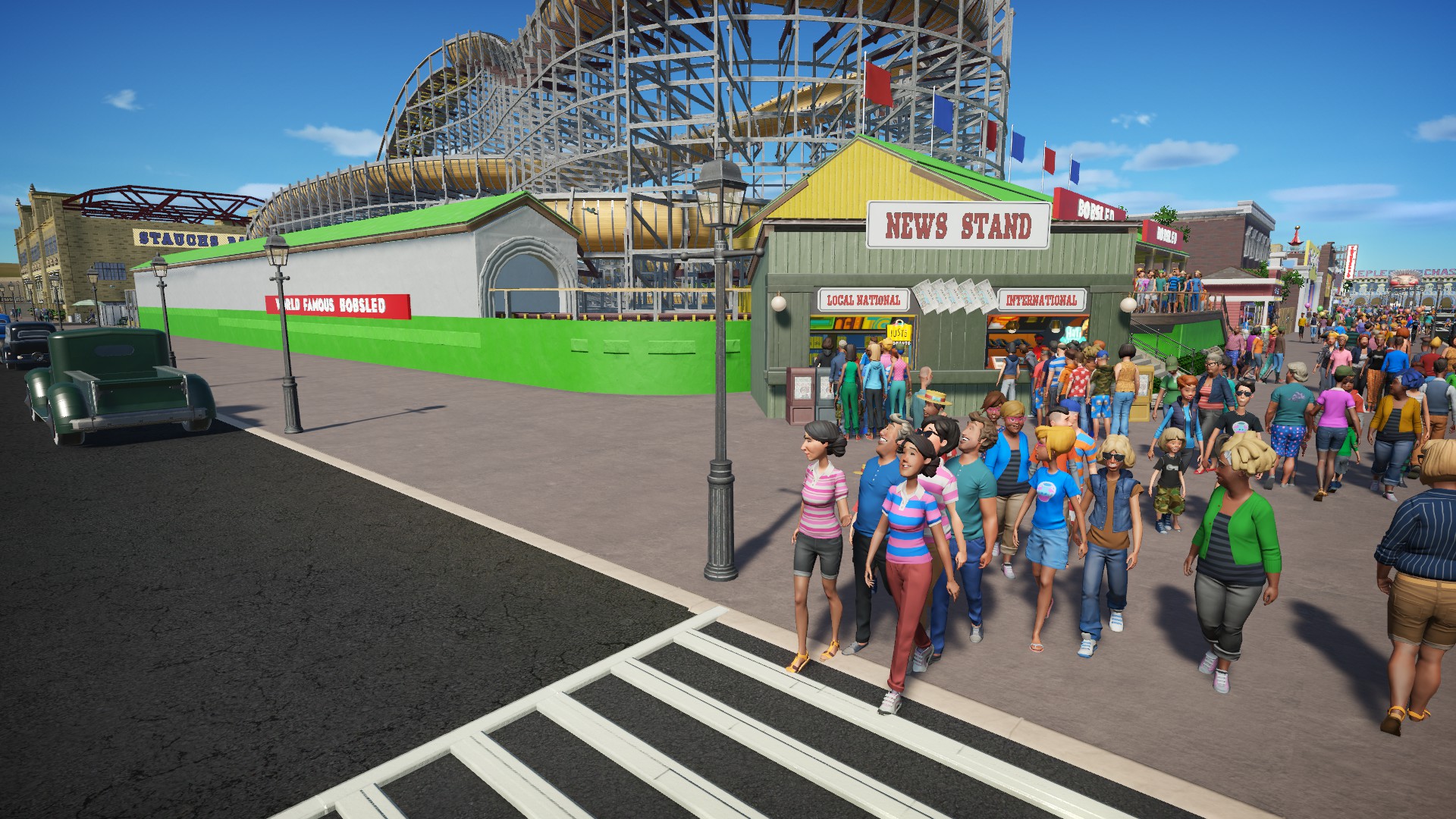 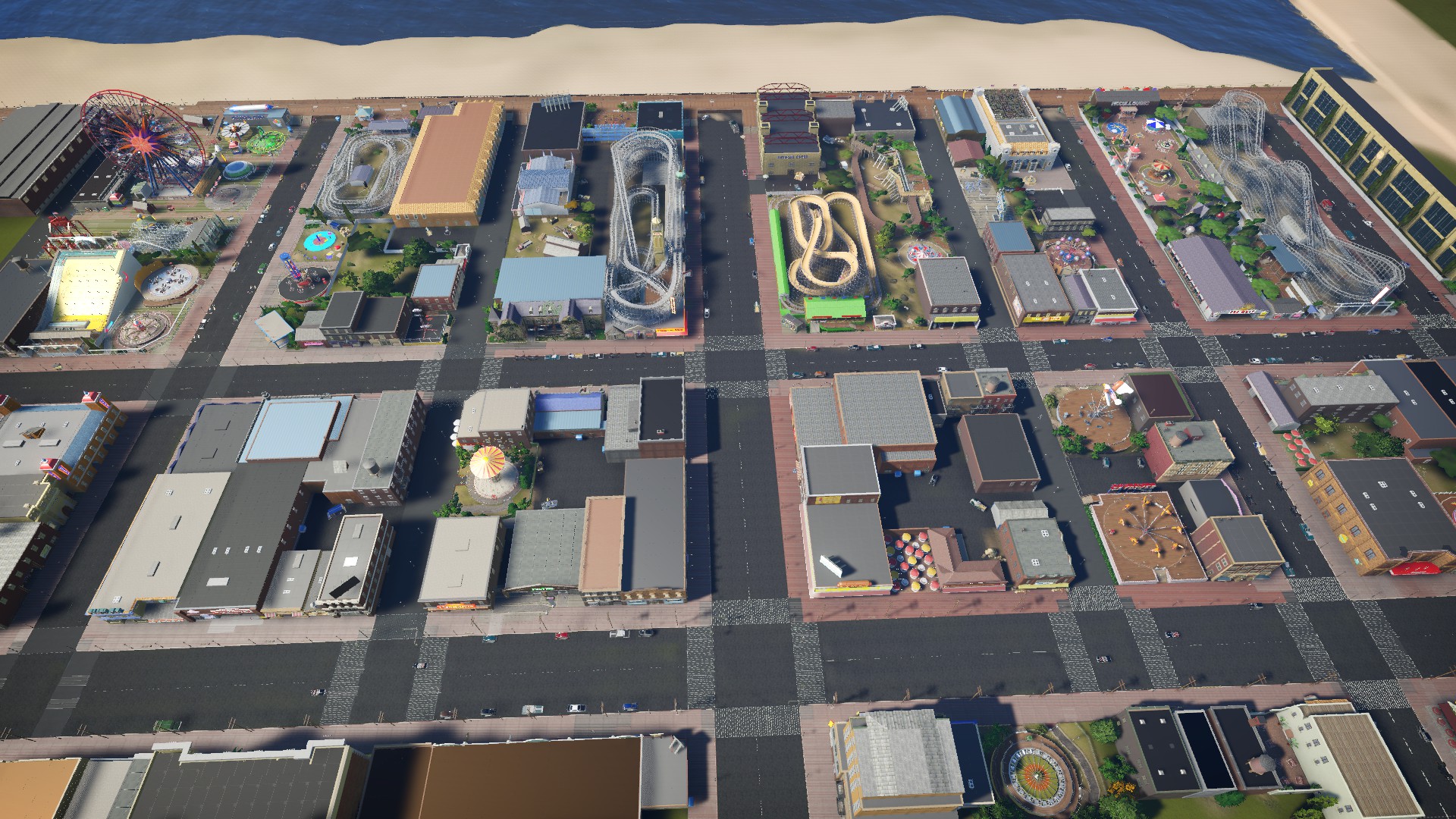 This has been one long, huge project! Great that it's nearing the end of construction!

Thanks so much Wagi! 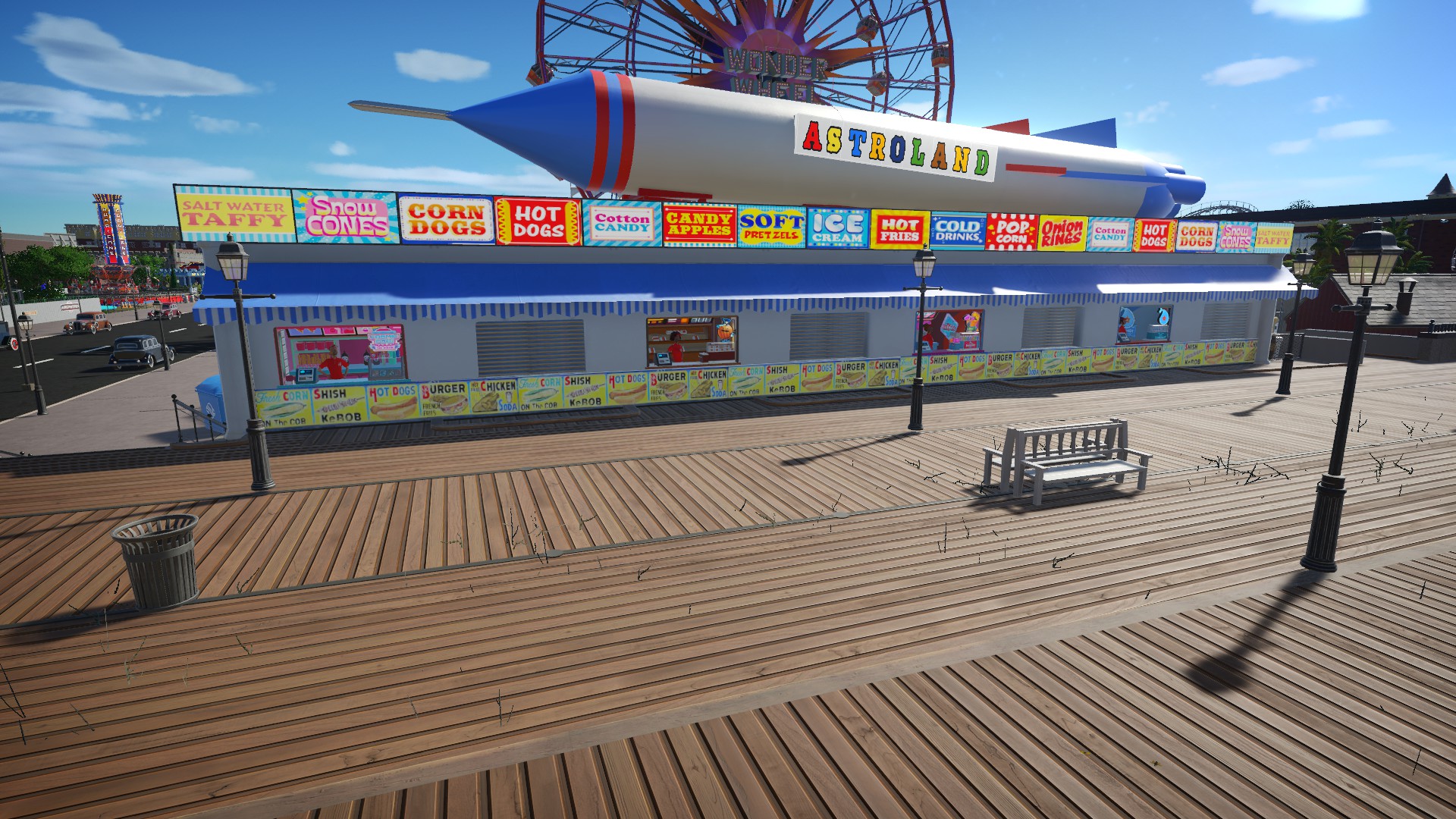 R
Is this park available for download? I thought it was. Now it isn't.

It will be available soon. 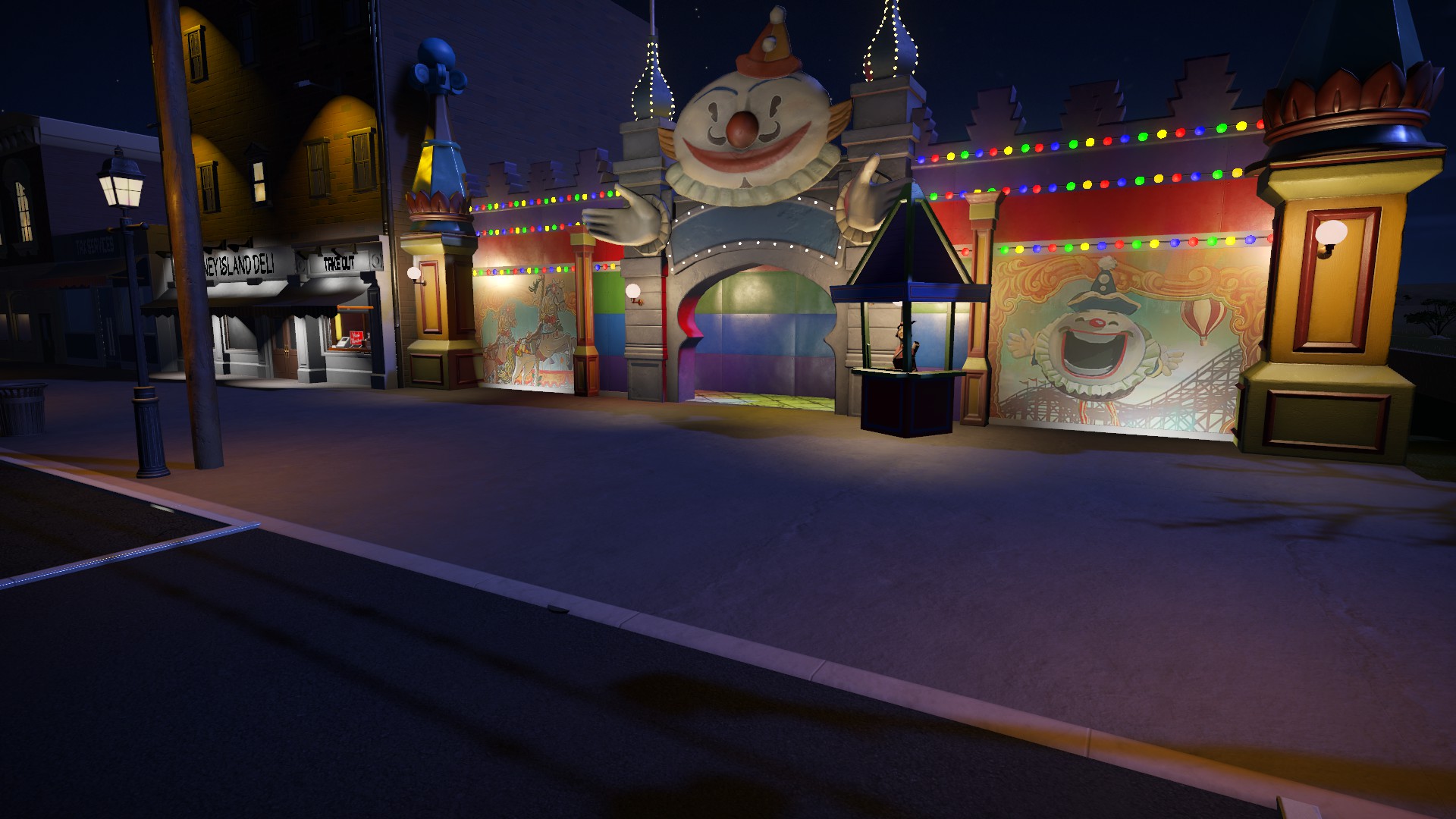 Was looking through some of my research material, and ran across this old postcard; 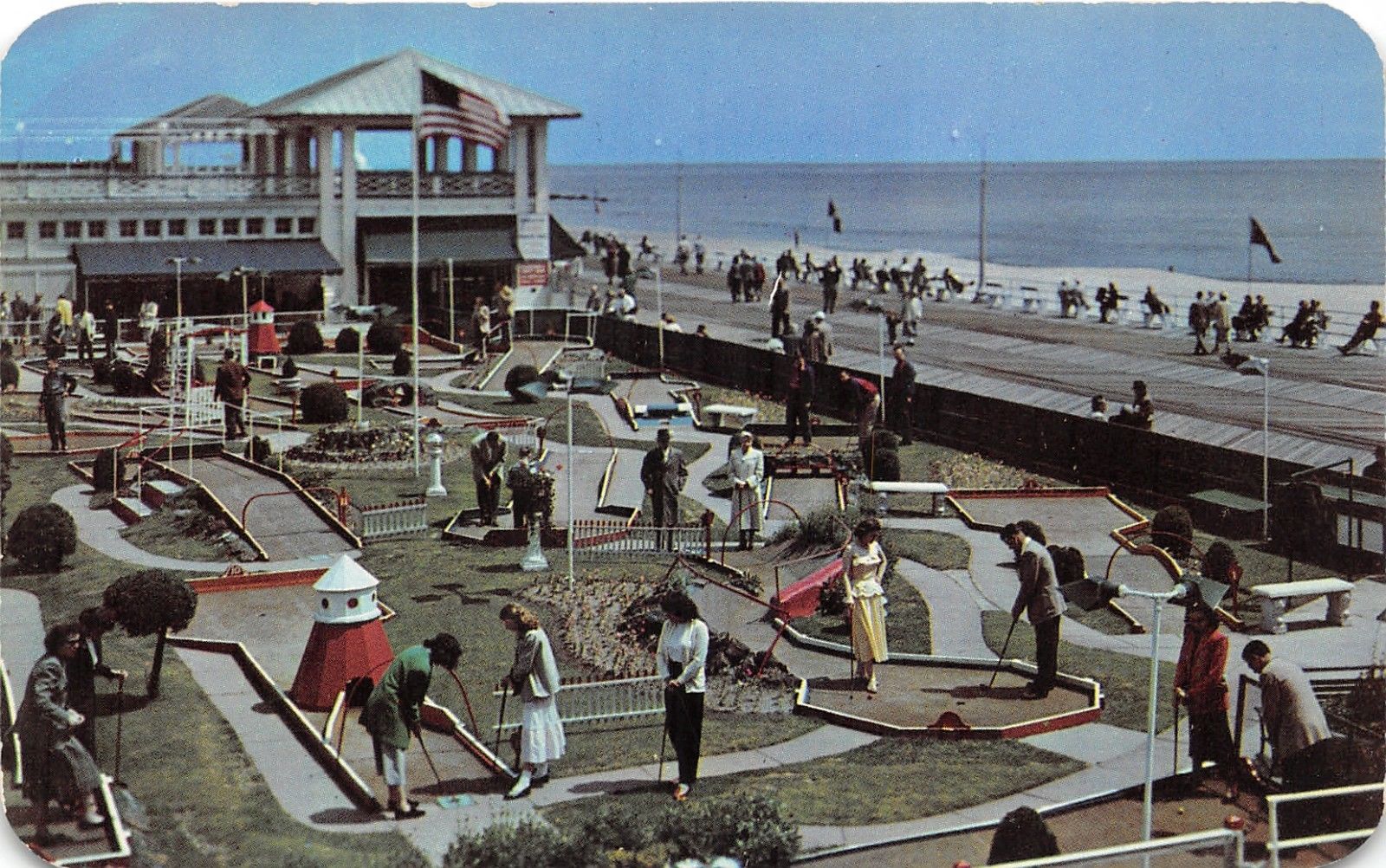 Don't you just love the folks in their suits and nice dresses out on the boardwalk!

Gave me the idea to create a small mini golf in my park. A very special shout out to DeLadySigner for her beautiful mini golf creations. I just had to readjust a couple of the holes to make a left turn. Also. thanks need to go out to BeyonddrewTV for his cute little hut. It makes a perfect entrance/exit building. Again, thank you both!

So this is intentionally bare bones and kind of cheesy looking, as most of the putt-putt courses were in those days. 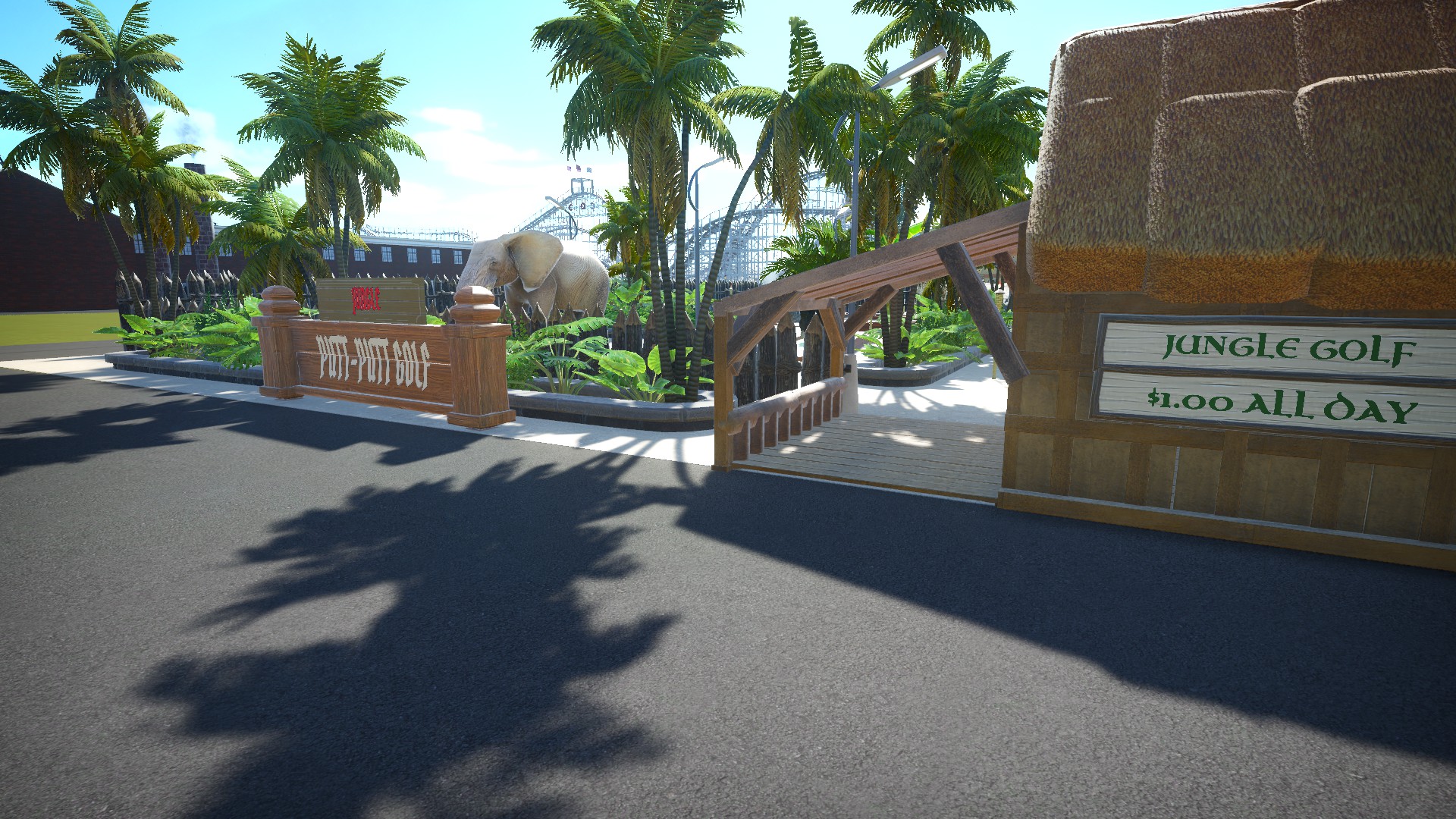 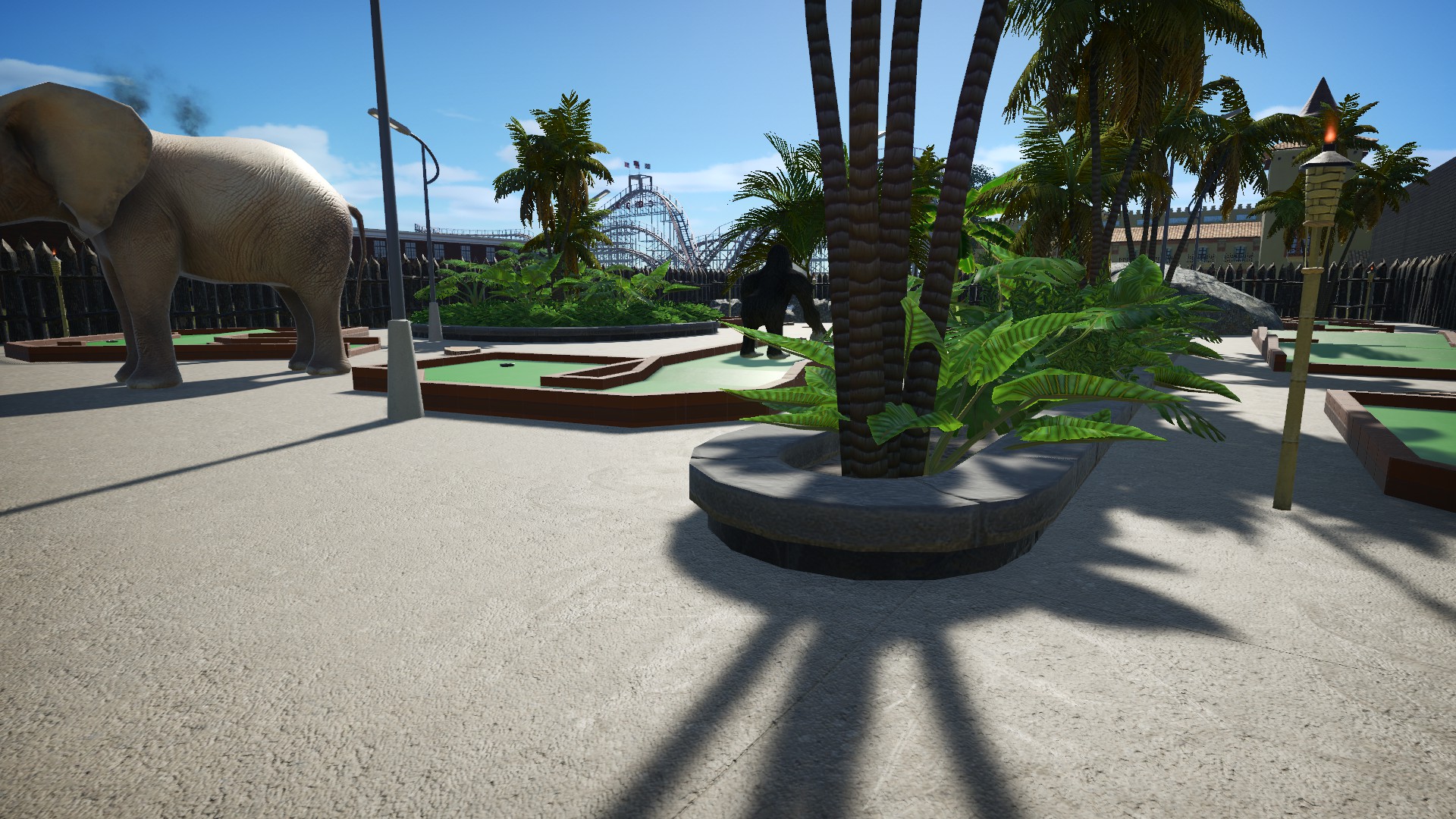 A giraffe as an obstacle. I built my own, but decided the TMTK animals worked better! 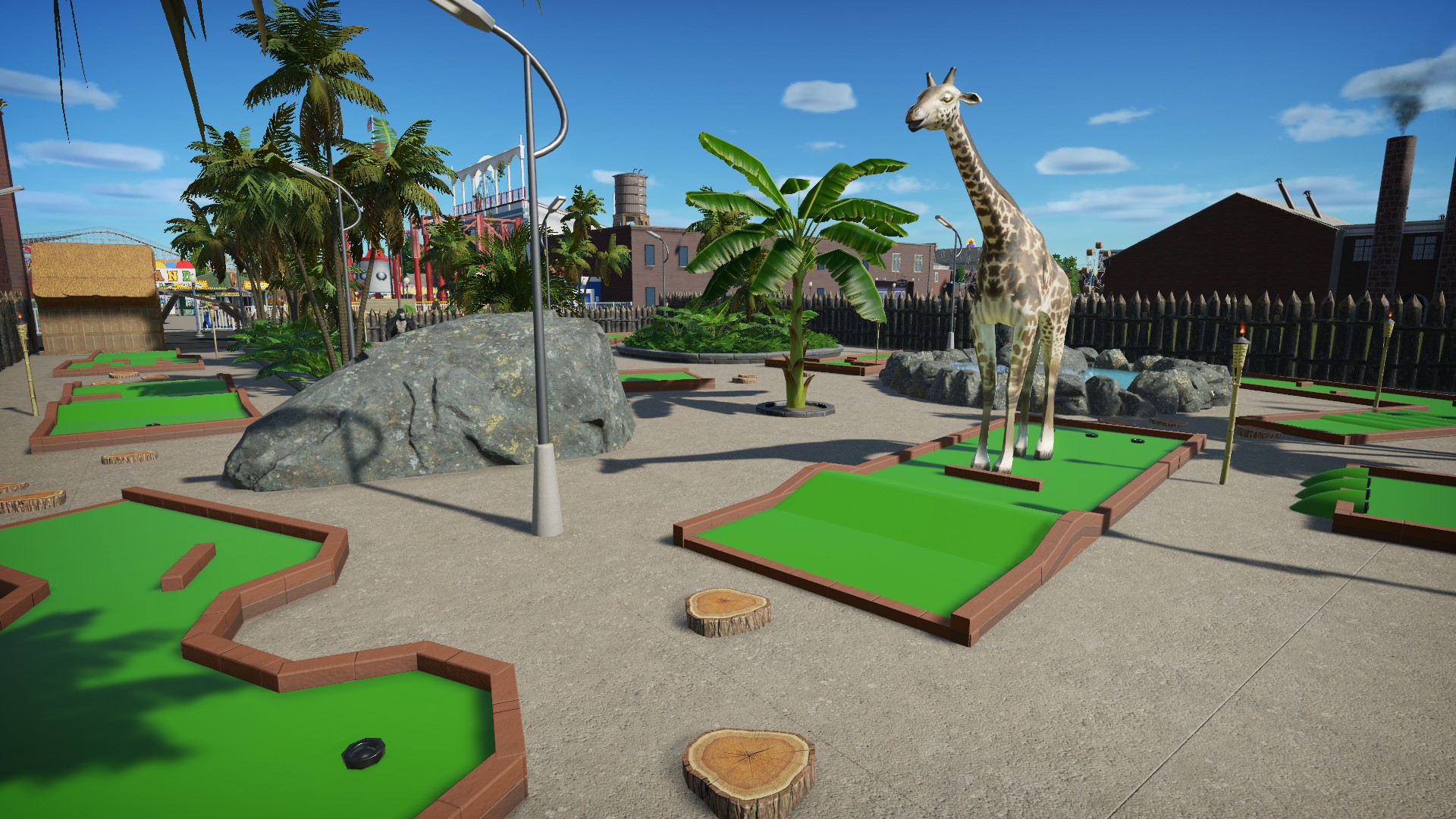 A small kiddie pool decorated with rocks and a small fountain; 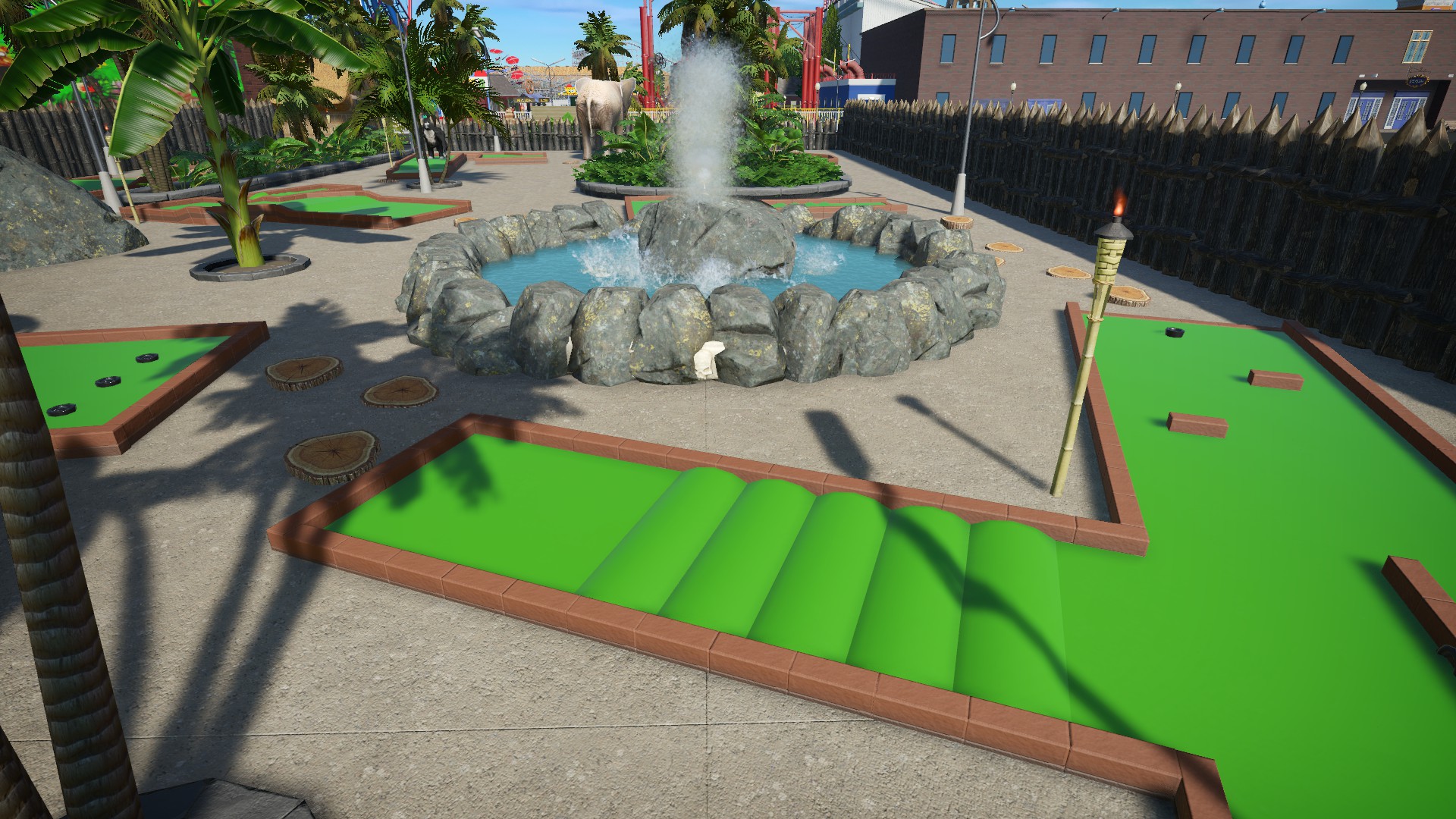 The owners of the course did pay their next door neighbor so they could paint a cute mural on the brick. It might draw a few more customers! 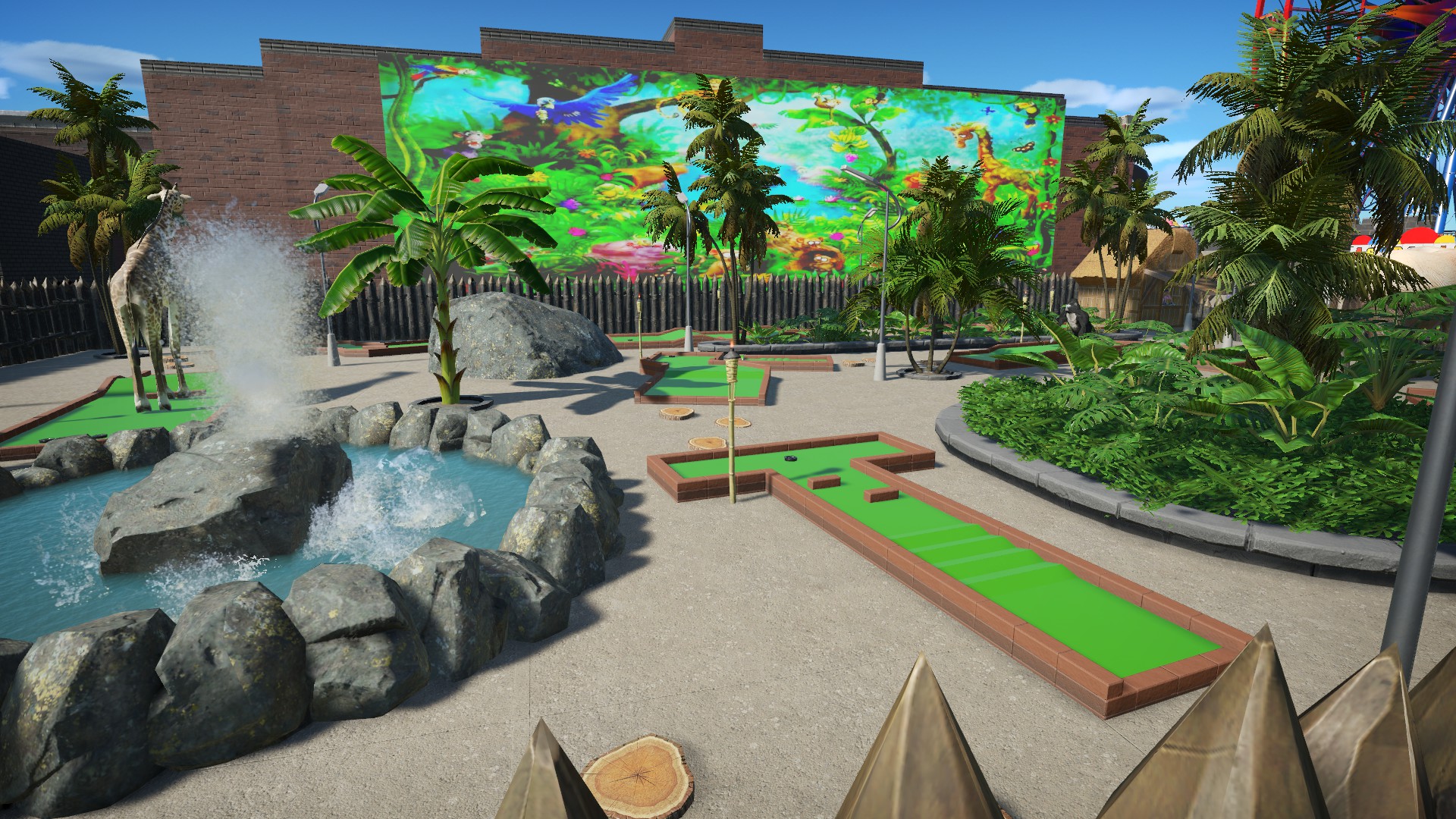 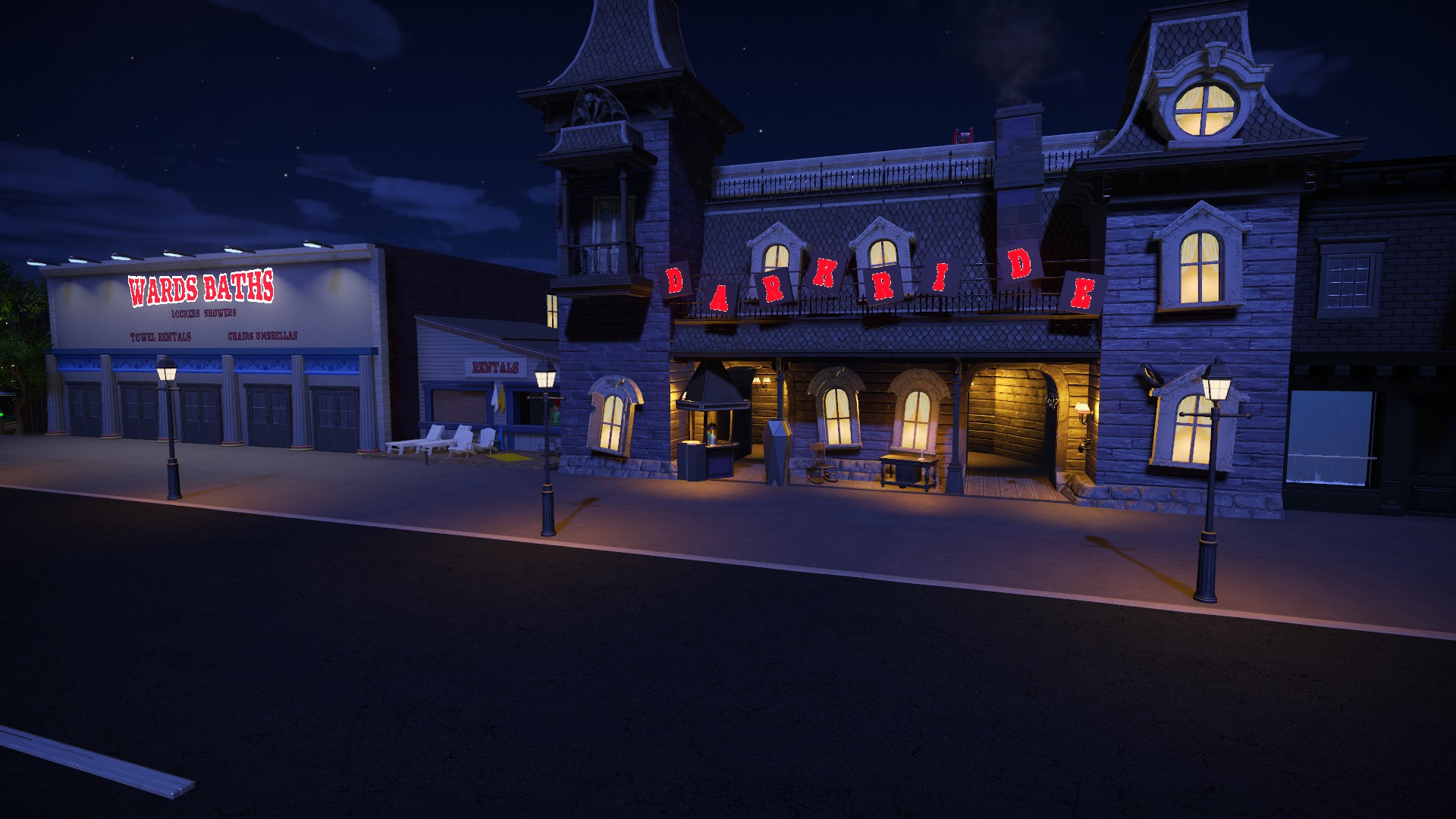 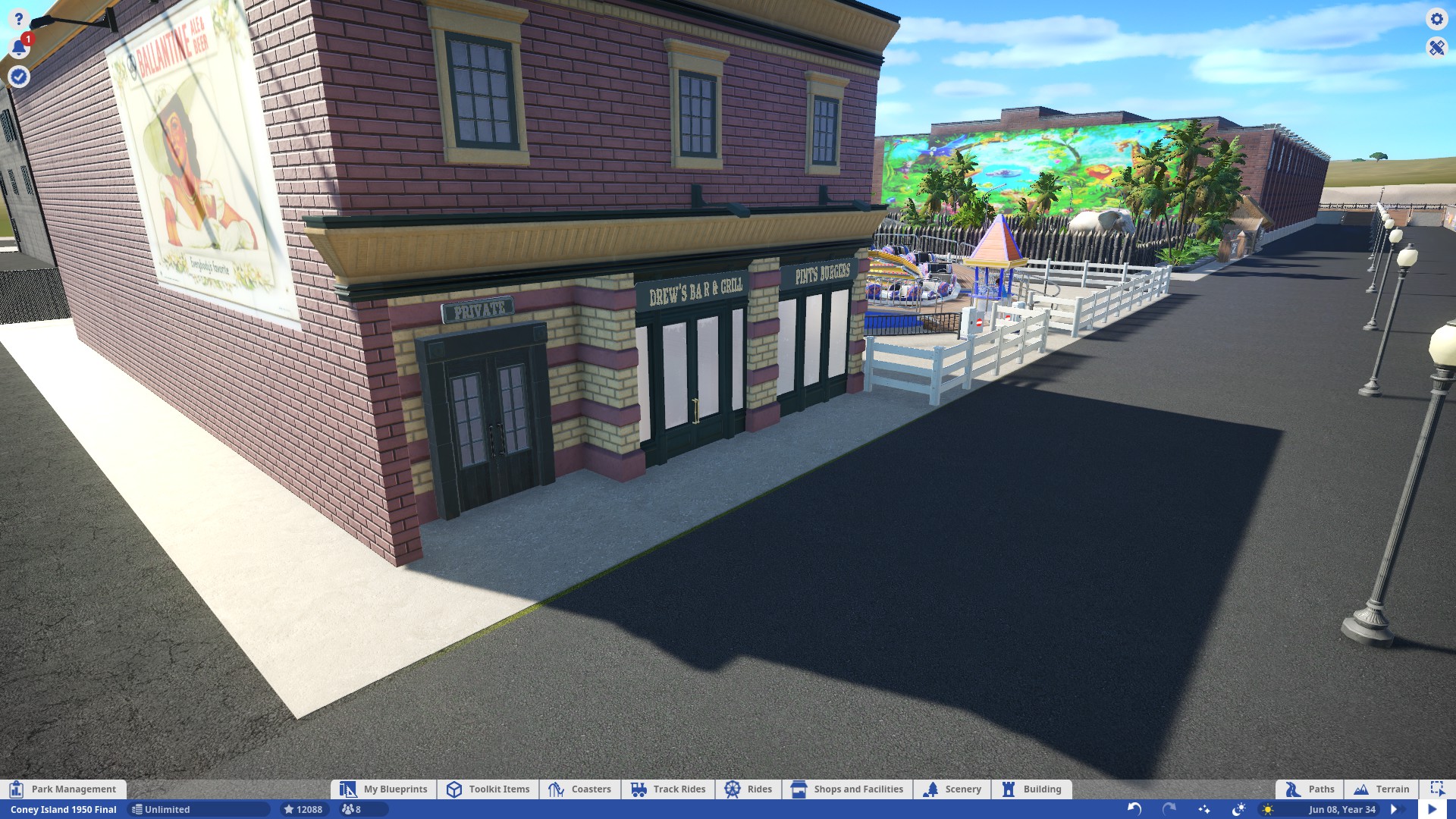 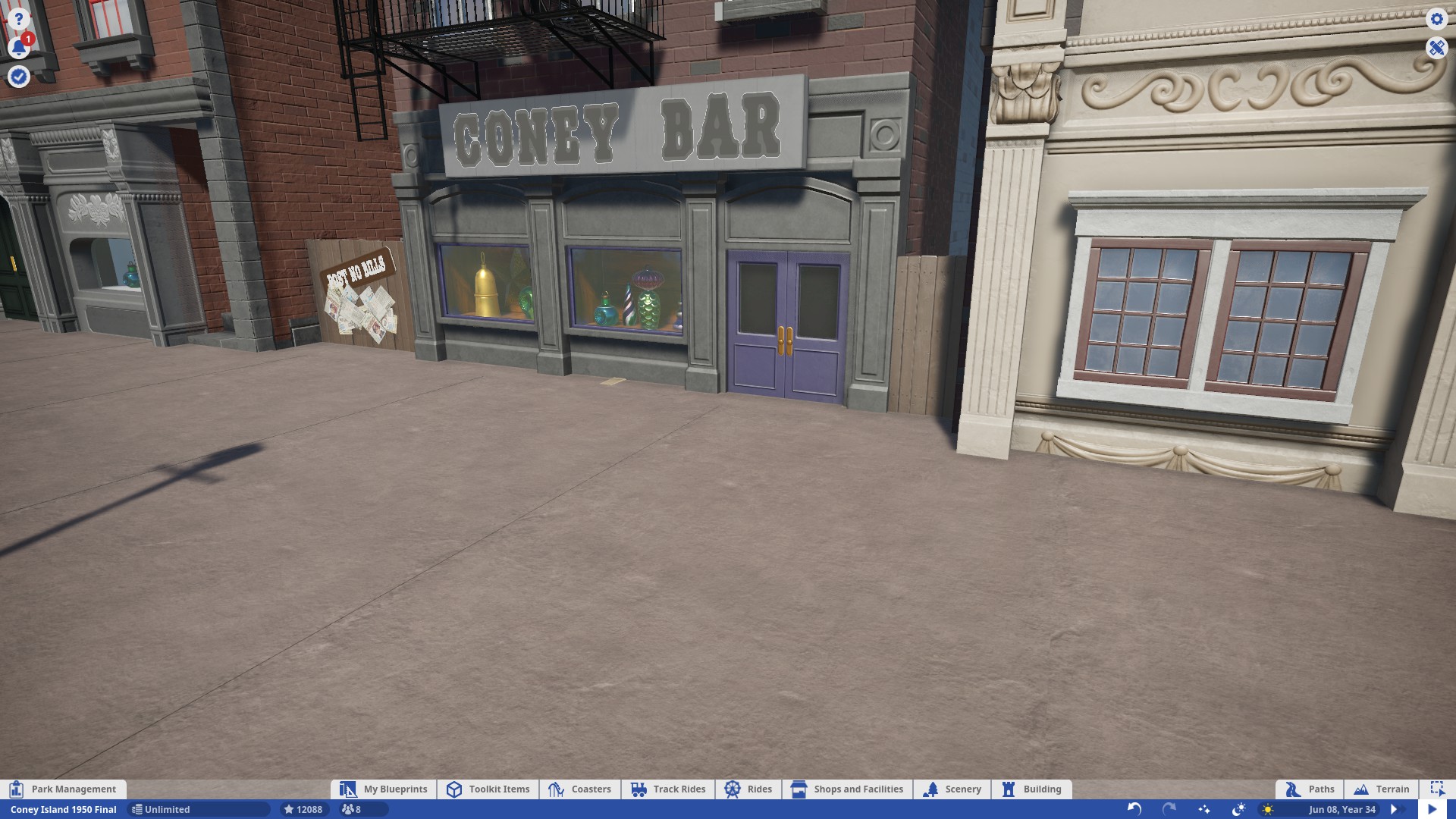 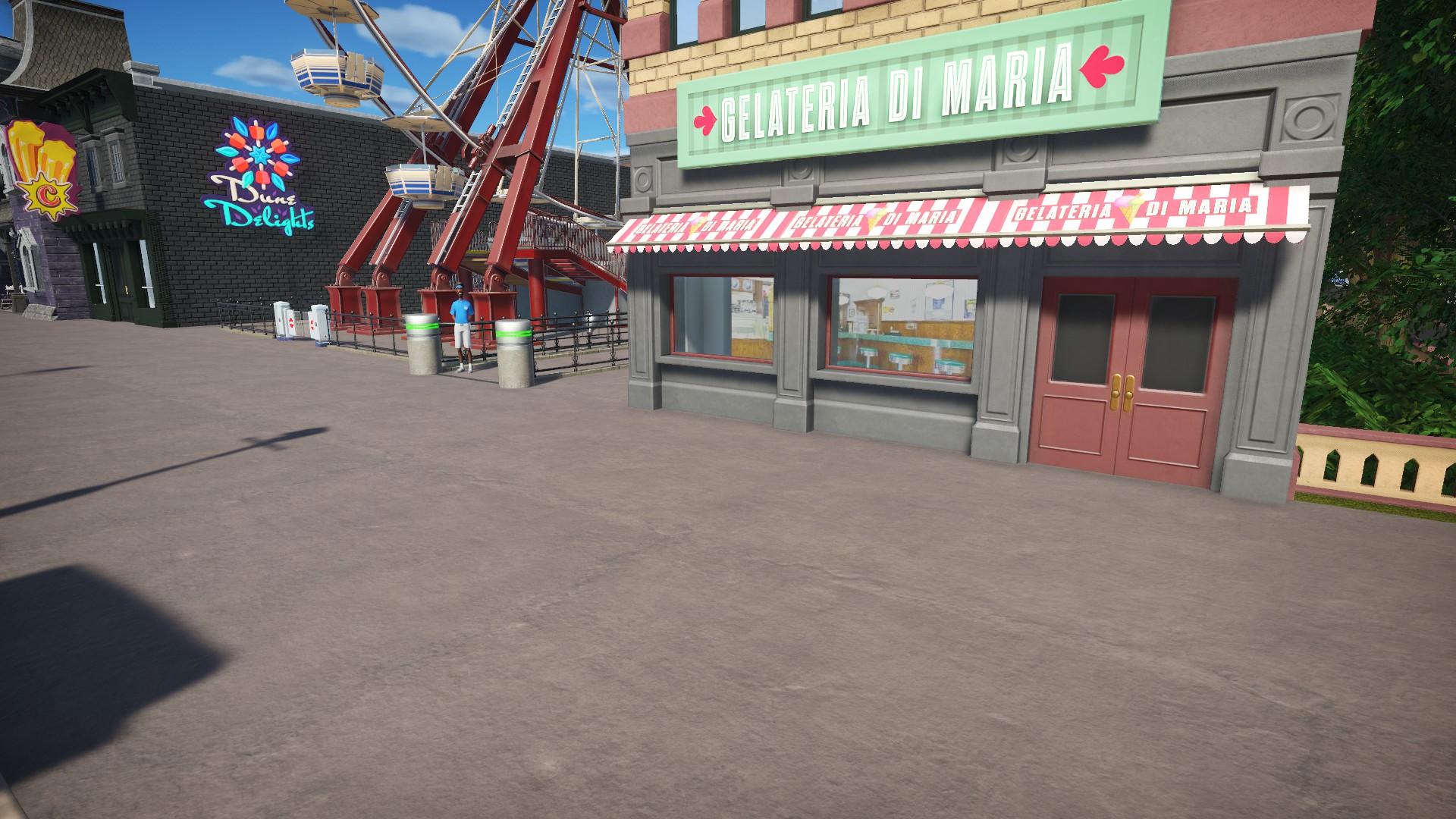 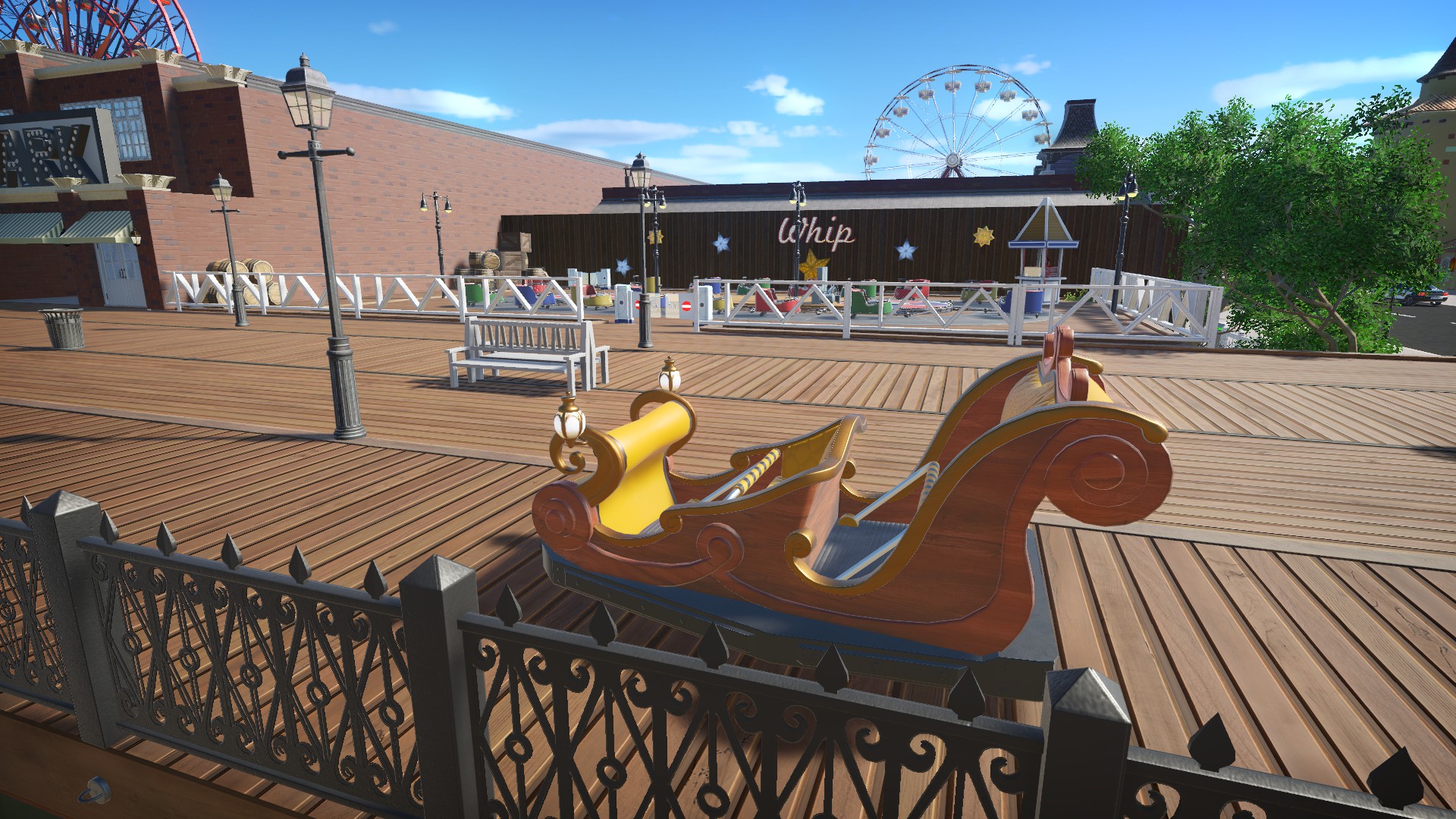 The view from the top of the Cyclone; 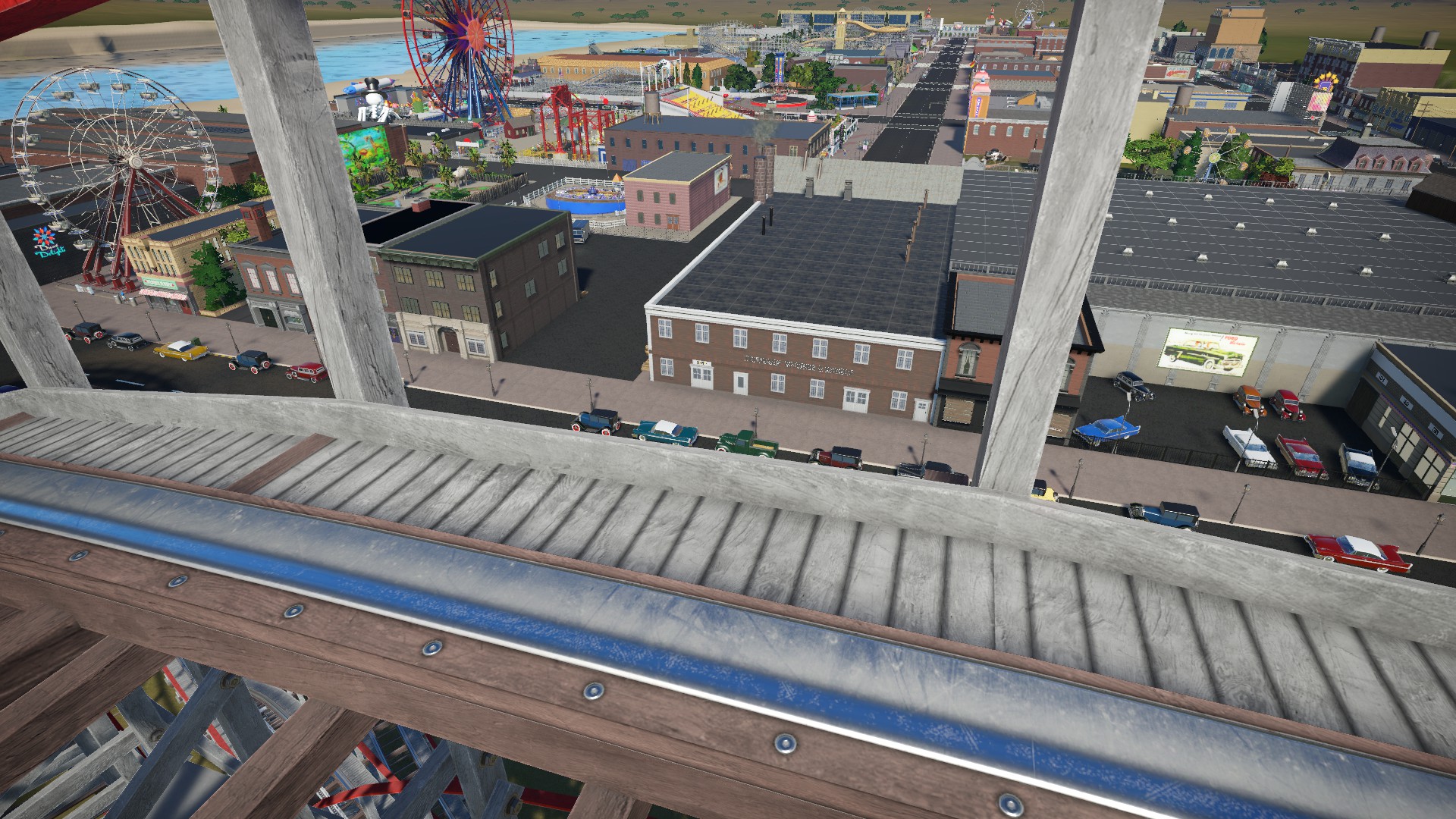 The silhouette at night; 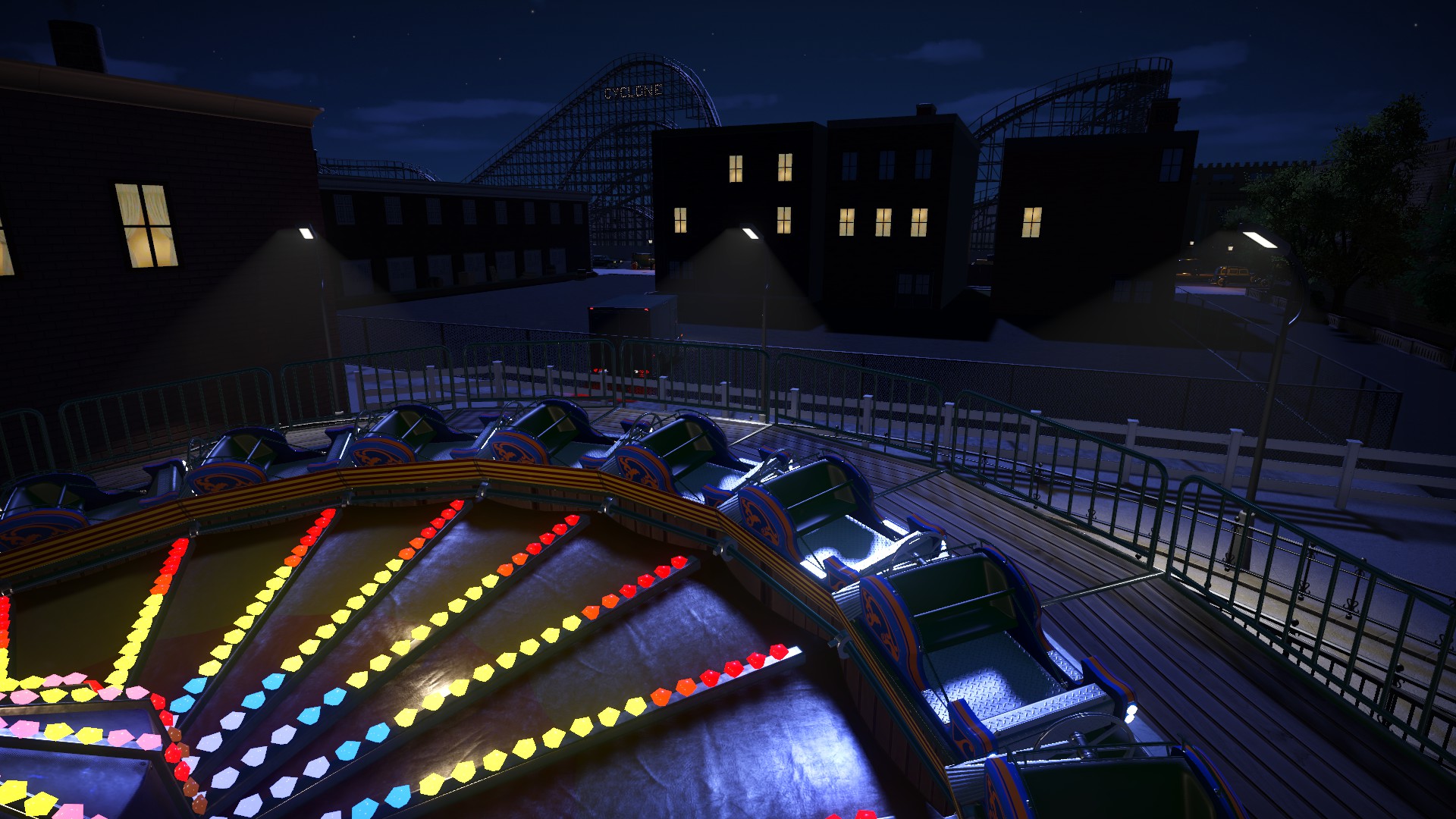 I think people are going to be surprised when they see just how large this project is, especially down at peep level, and the level of little added detailing is really impressive. 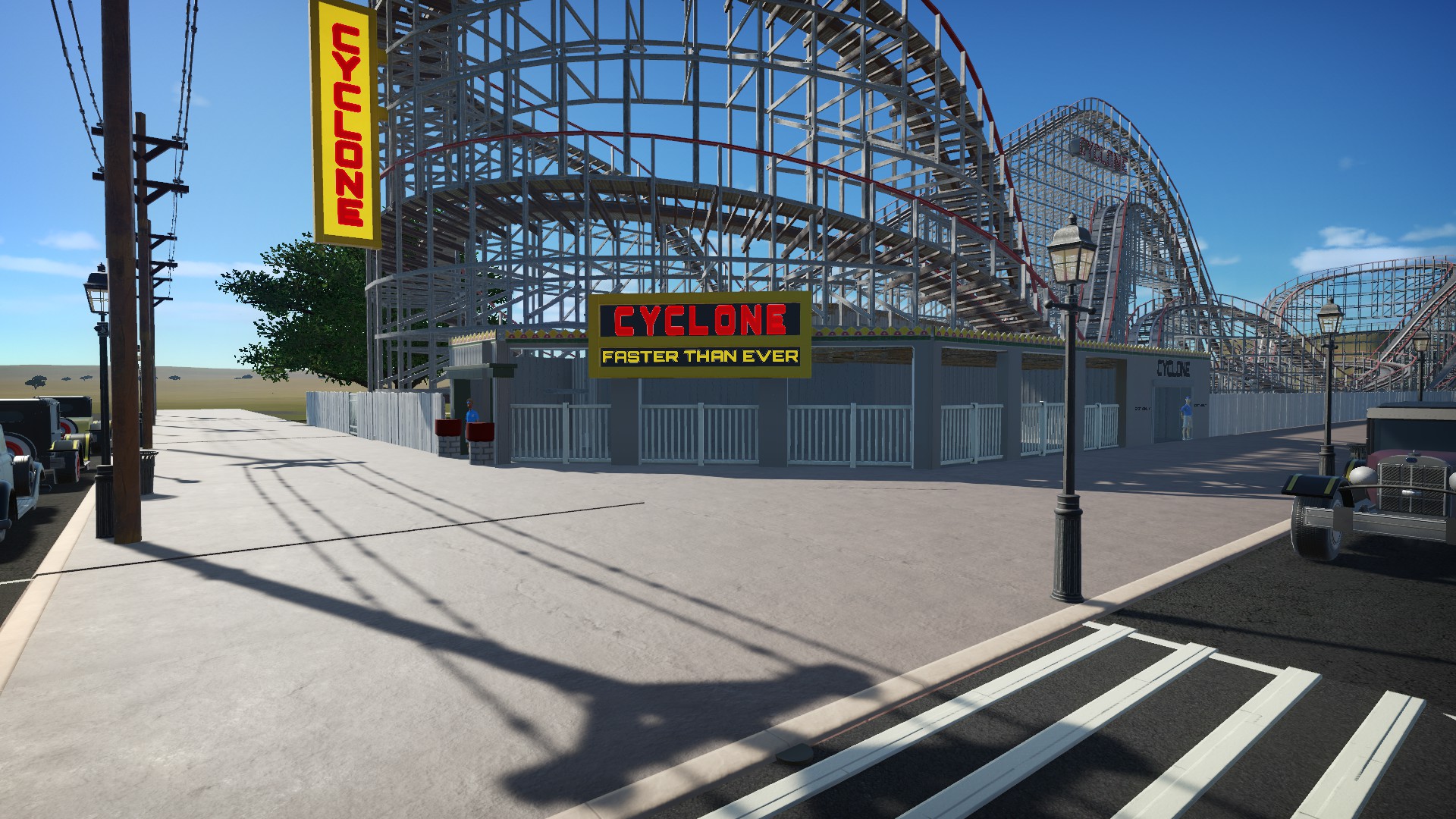 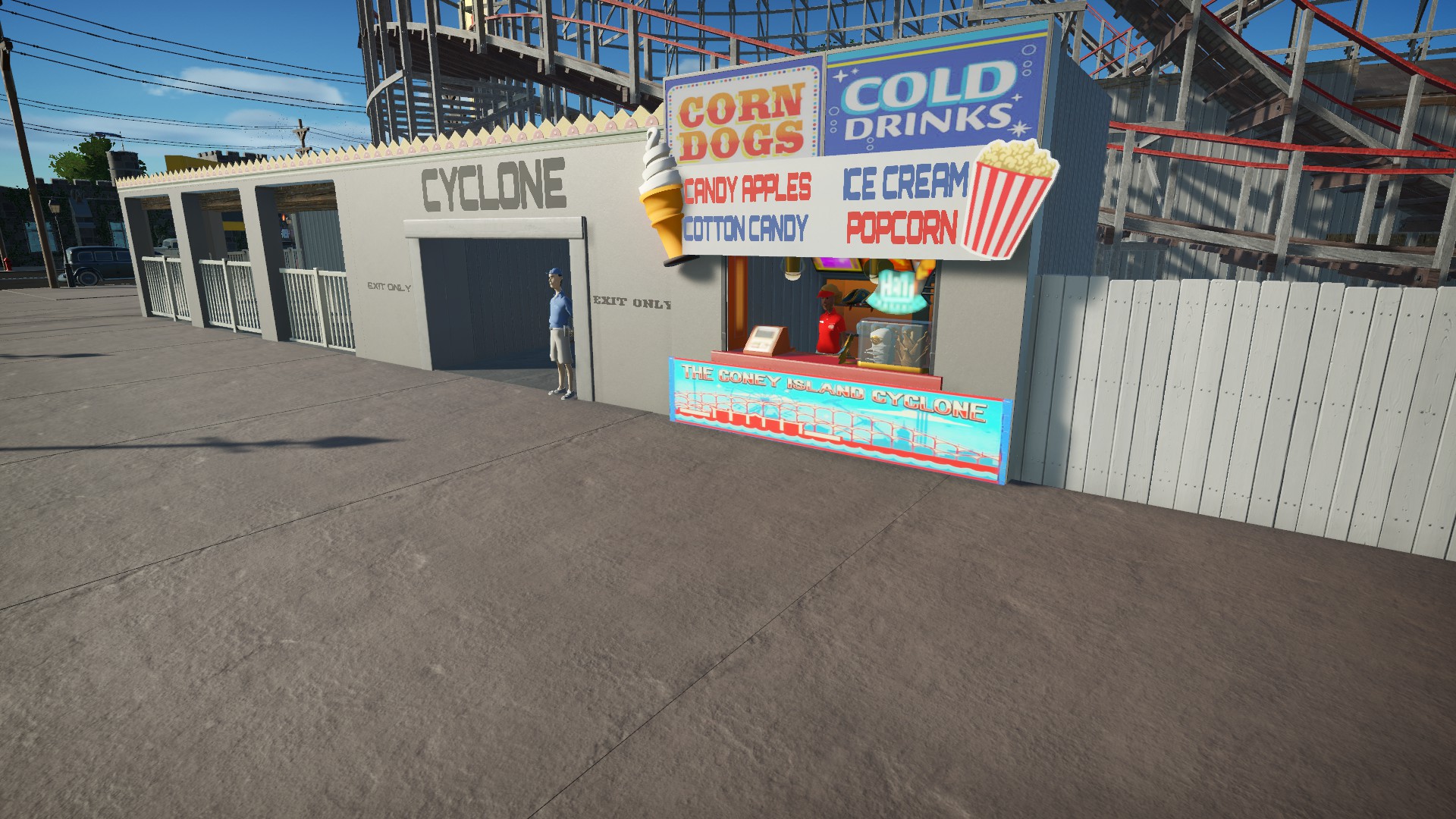 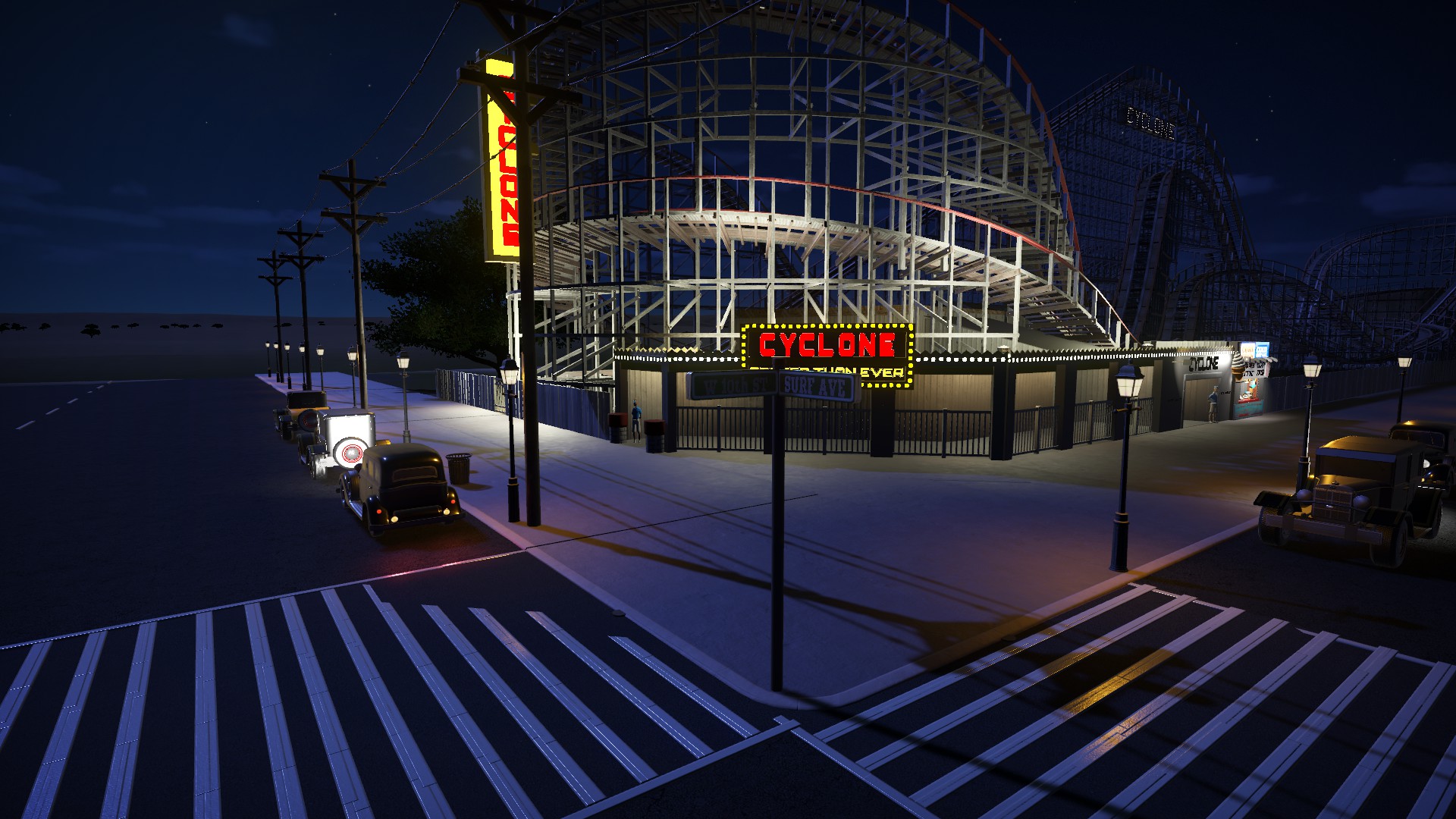 A few pics around Coney Island;

The walk through horror attraction, the Dungeon; 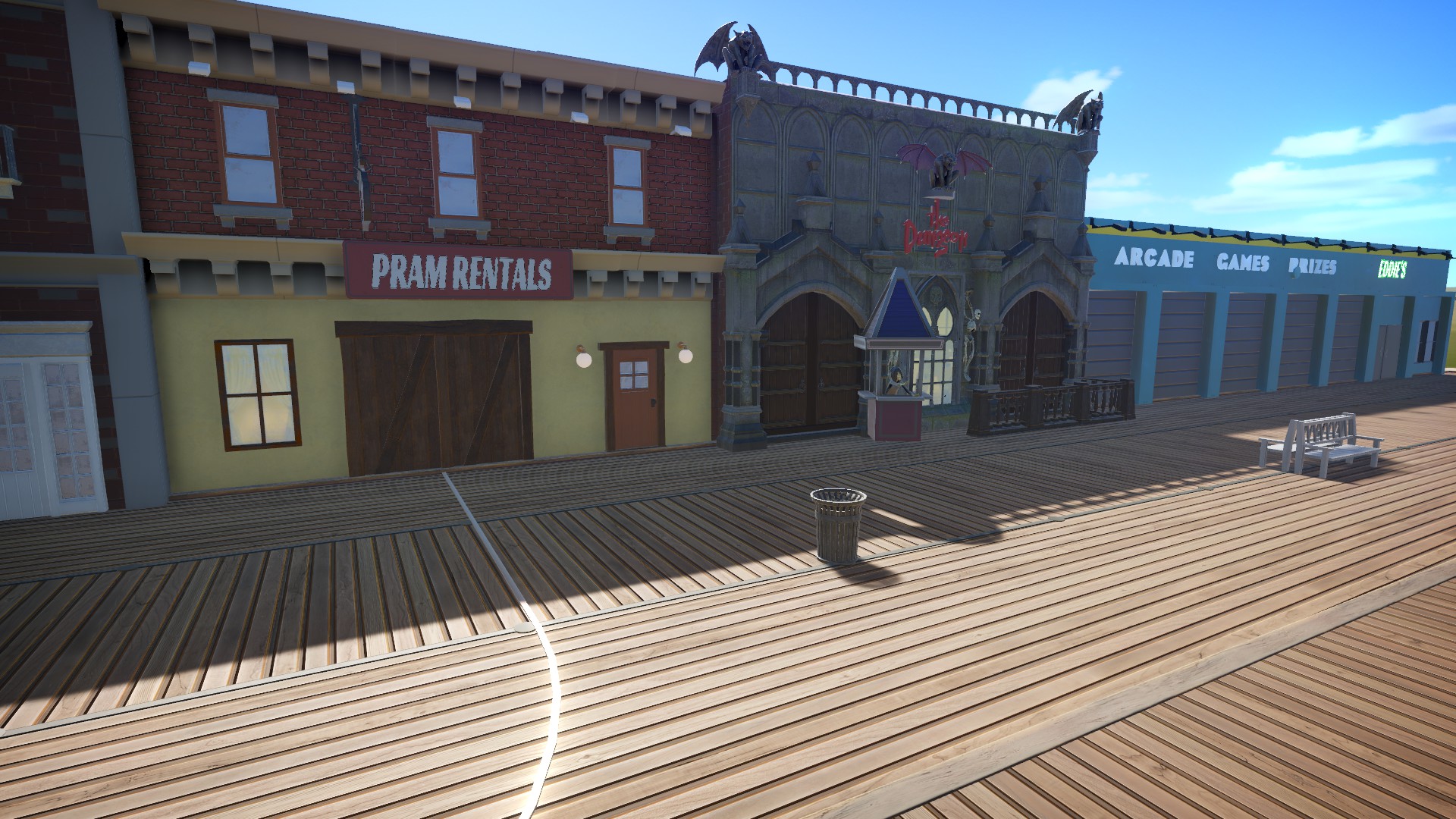 The Boardwalk Whip, with a simple wooden backdrop; 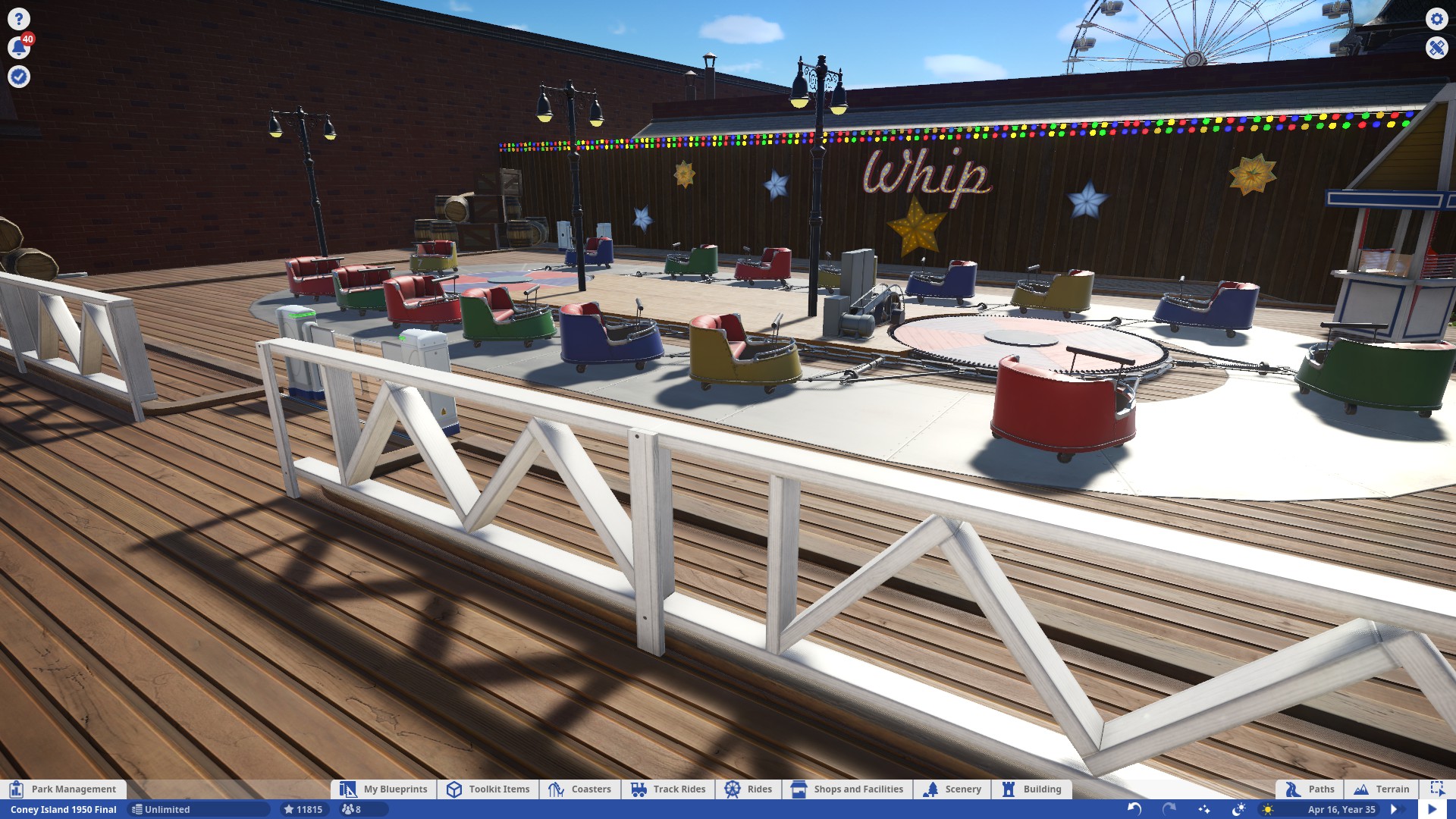 An overview of Astroland, with the Wonder Wheel front and center! 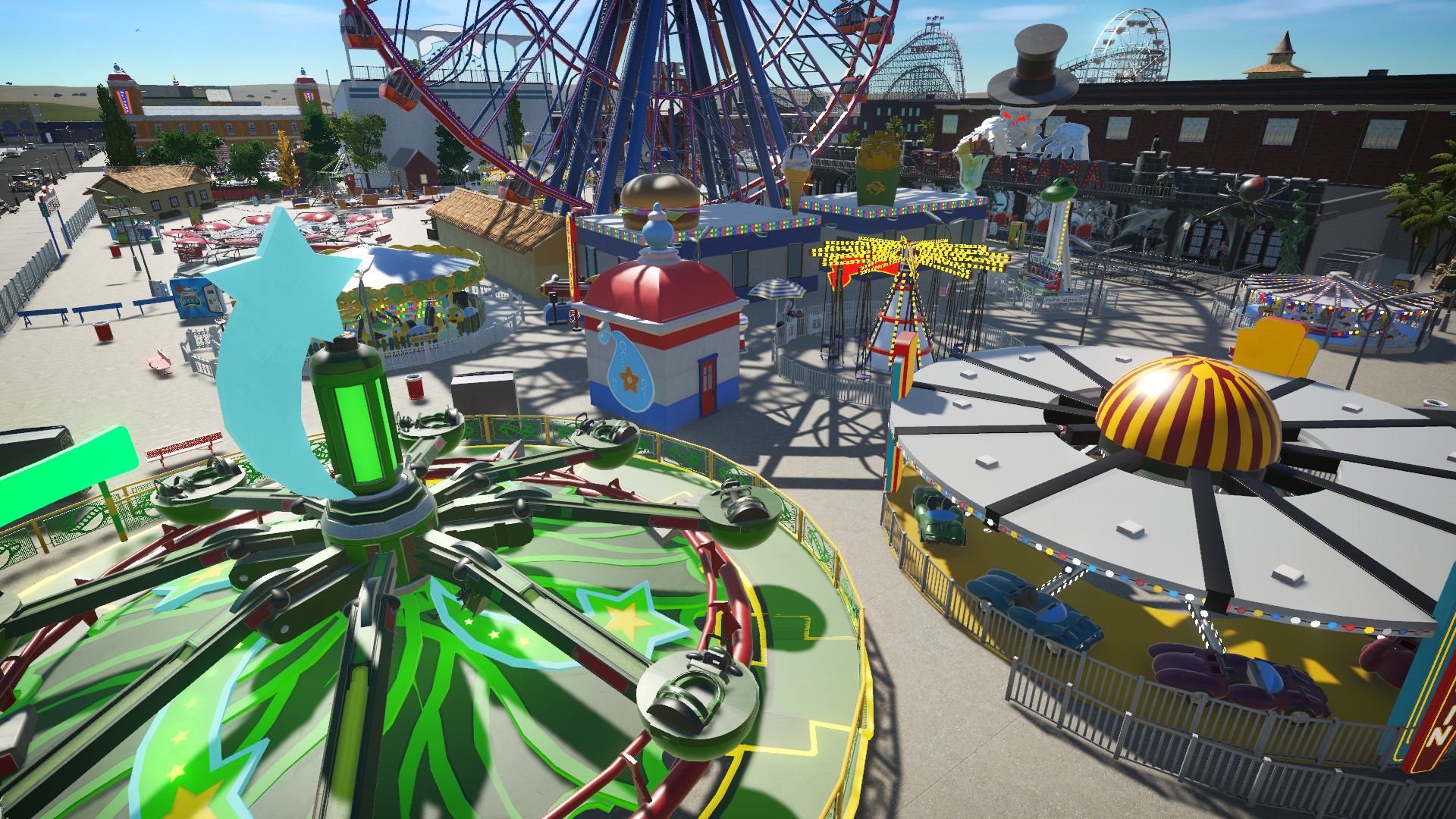 Surf Avenue is almost a half a mile long! 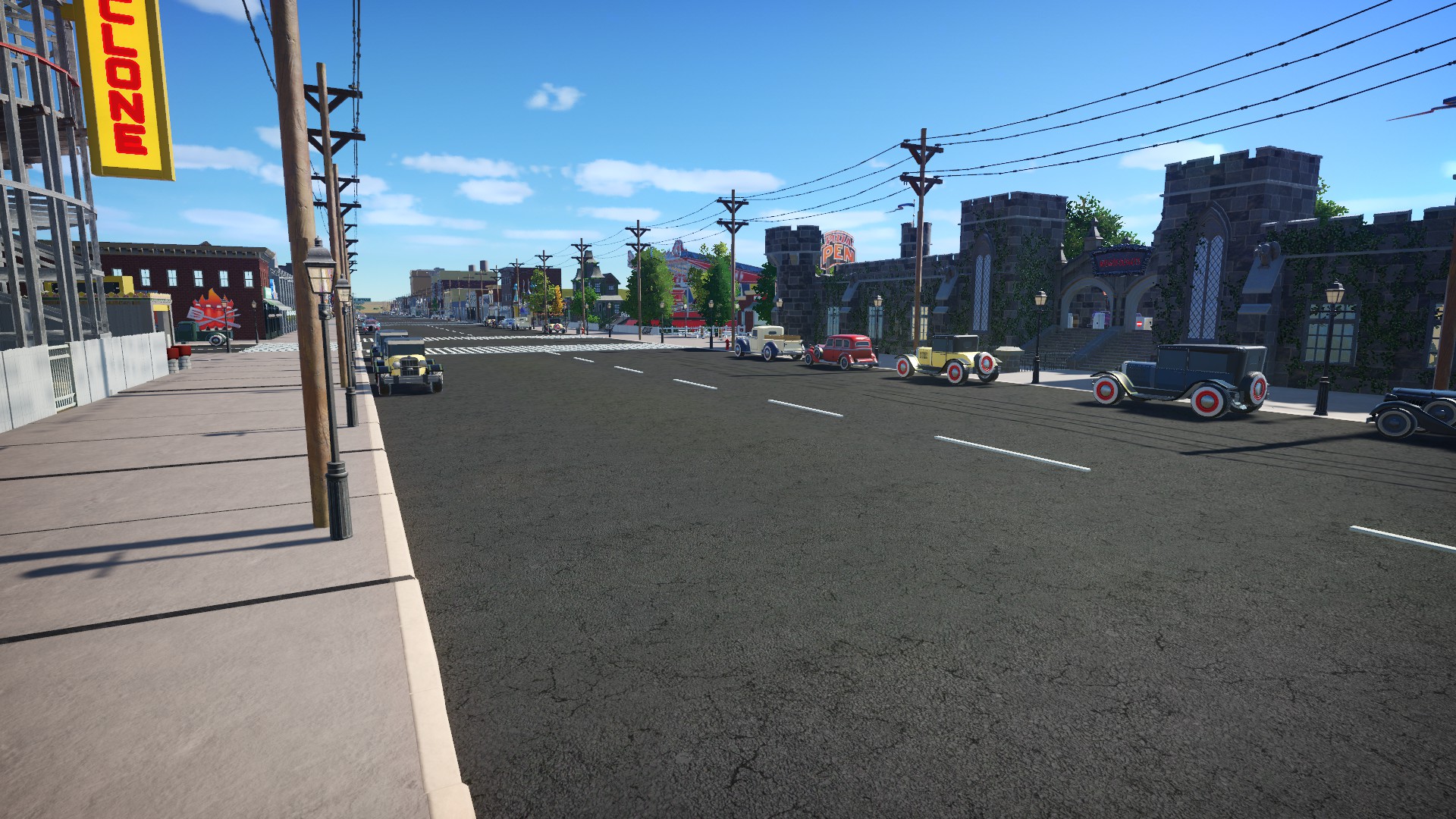 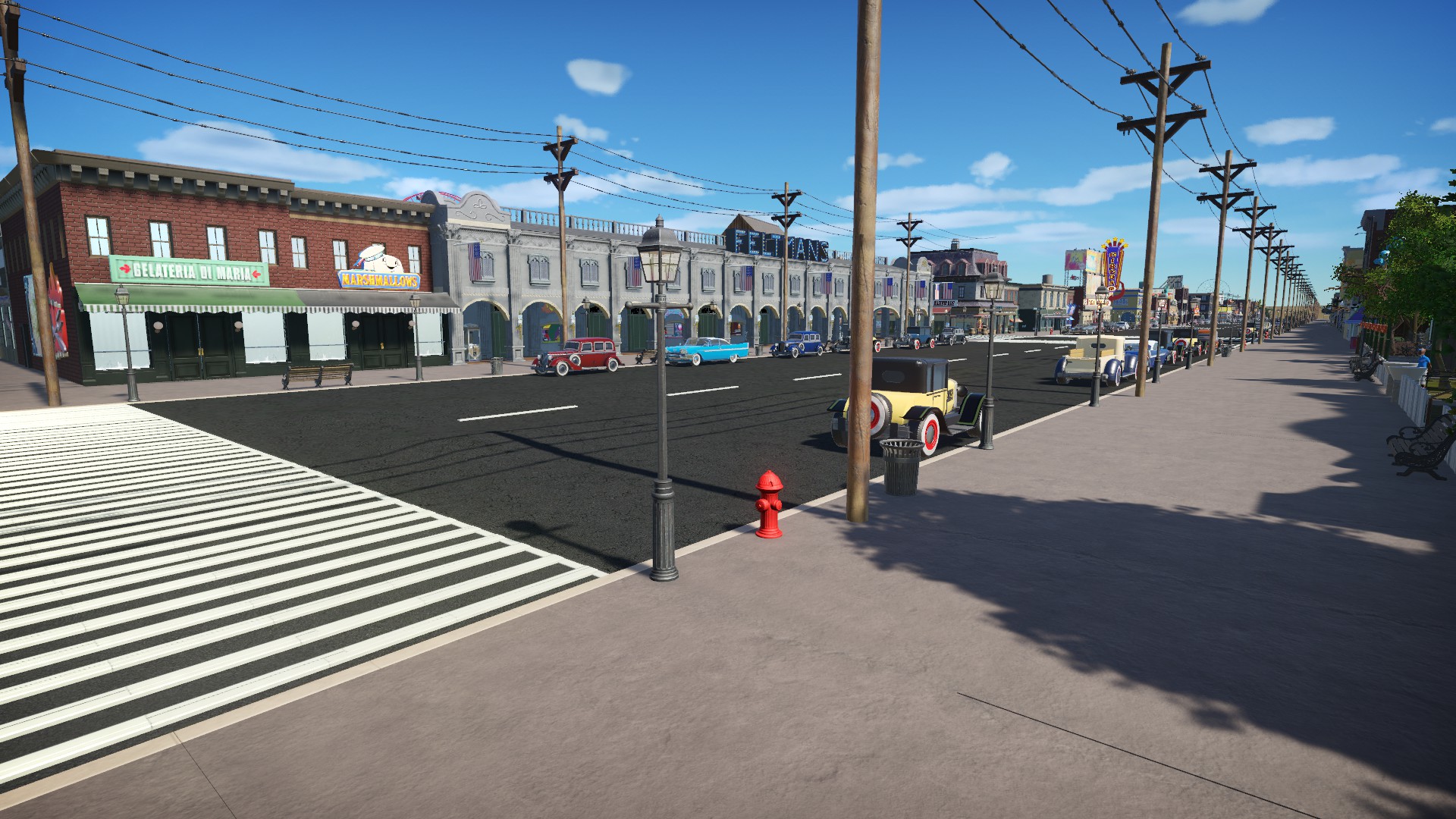 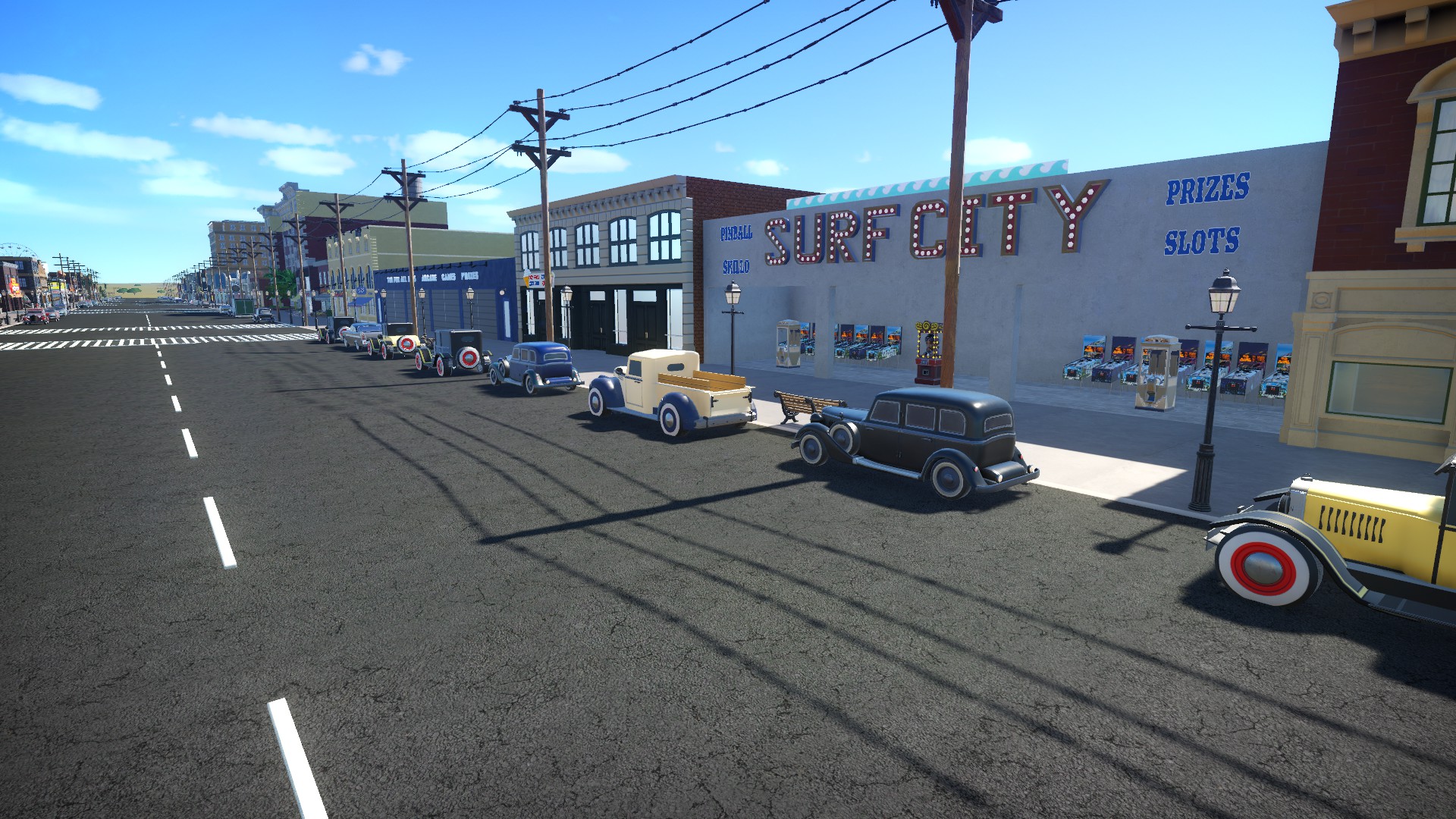 The Eldorado Auto Scooters are still at Coney Island today! 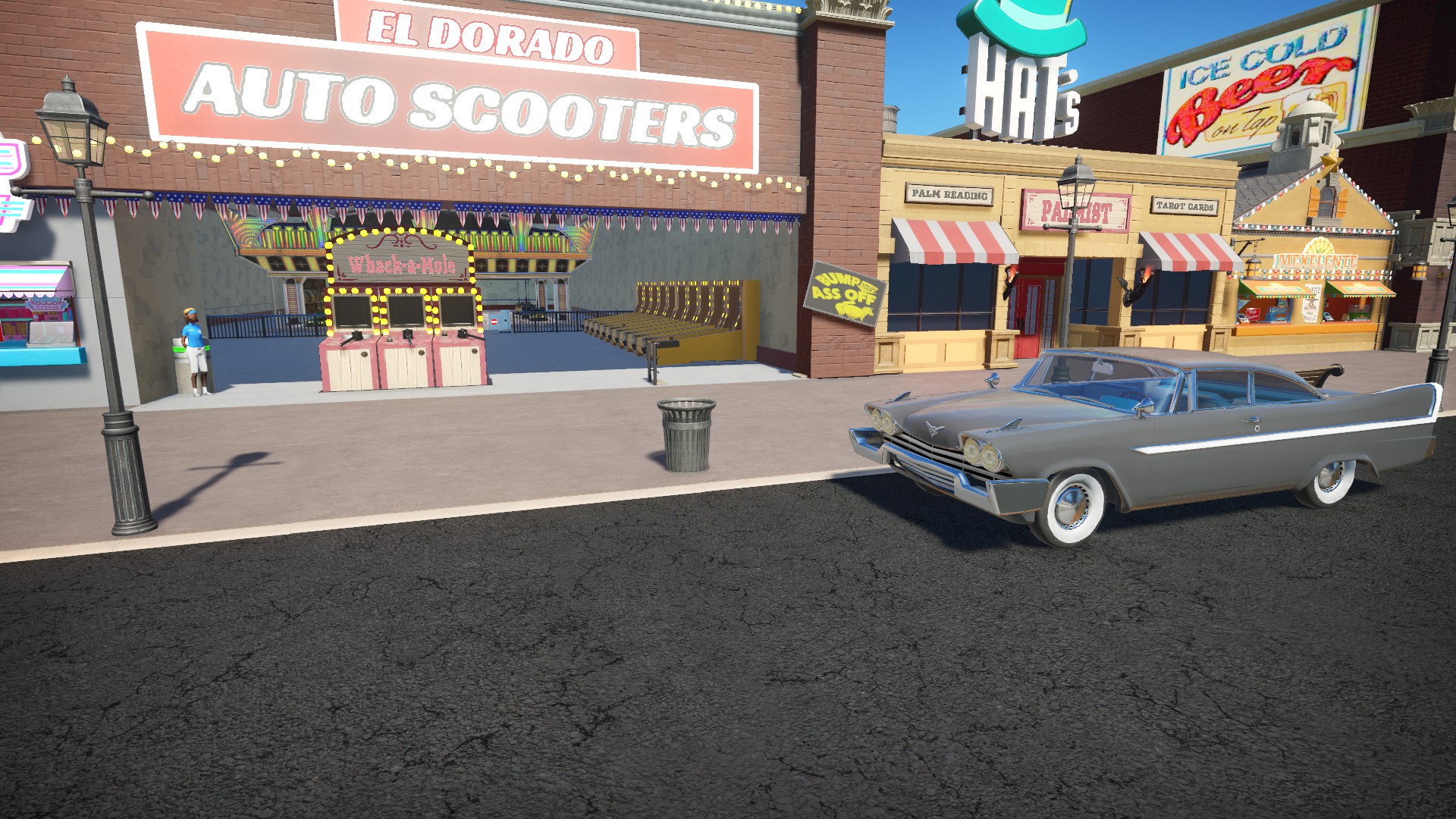 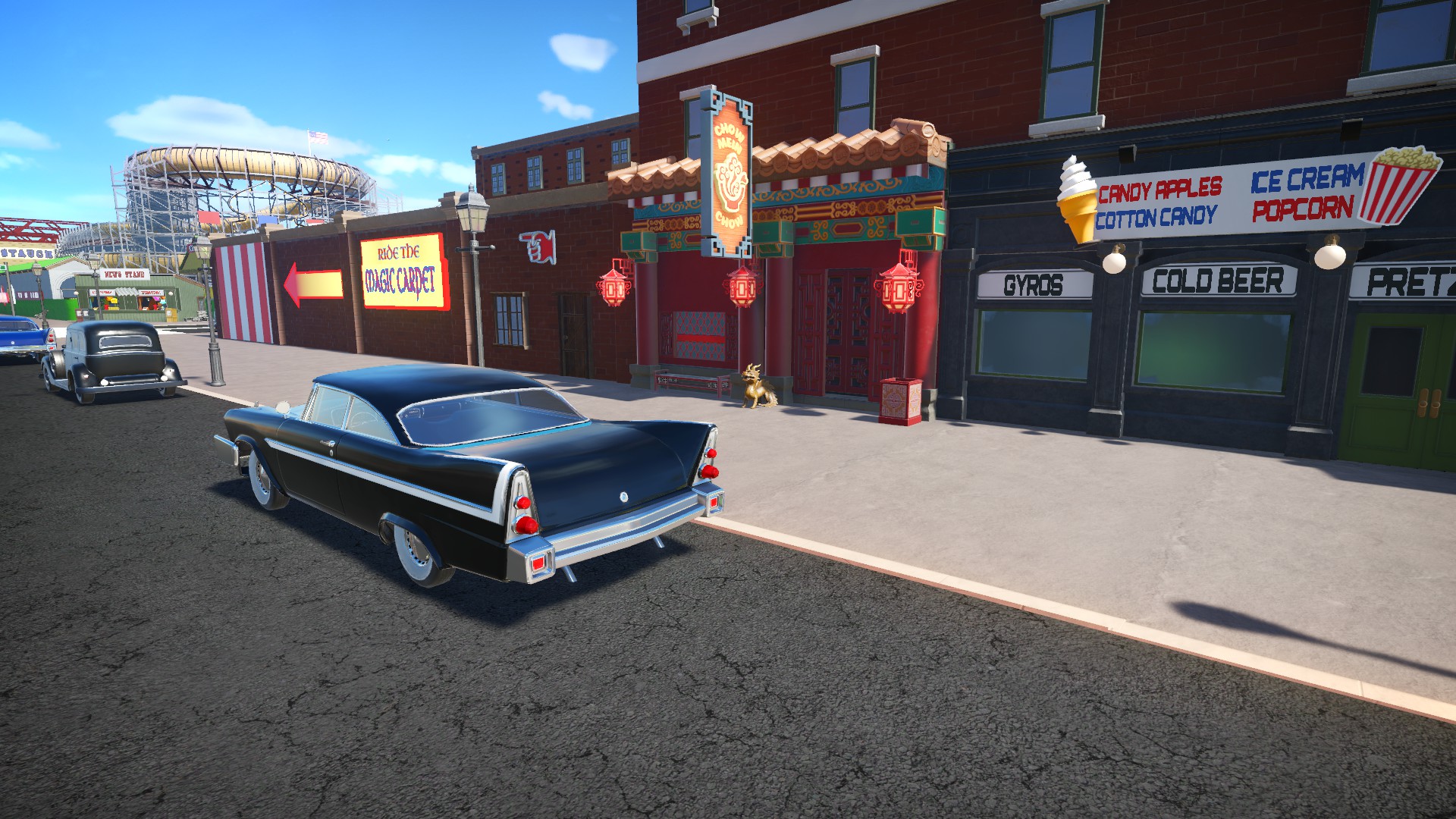 Frontier
So how big is this project? It seems massive!

OK, let’s get one thing out of the way. Coney Island is neither an amusement park nor is it an island. Coney Island was an island back in colonial times, but gradually, the tides changing and human intervention turned the area into a spit of land on the south end of Brooklyn, which is really on Long Island. Over the course of the years, the bright sunny beaches lured the people of Manhattan out of the crowded city to visit the equally crowded beaches.

During the turn of the last century, a number of small amusements and attractions came to Coney Island, including Sea Lion Park, which was also the first park to ever charge a single admission price for all the attractions. Dreamland, which burned down spectacularly in 1914, (the owner, not to lose money at it, charged a nickel to view the ruins!), Luna Park and its spectacular fire, and, of course, Steeplechase park, the funny place. Most (or all) of these parks have gone on to be legends onto themselves.

Immediately after World War Two ended, the citizens of New York wanted a fun and exciting place to visit for some thrills and spills, and Coney Island answered the call. Some of the most famous coasters in the world ran there in this post war period, including the Thunderbolt, the Tornado Bobs, the Bobsled, and the legendary Cyclone.

I have enjoyed trying to recreate this area of Coney Island for a number of years now. Almost 20 years ago, I released a version of Coney Island in RCT2, tried (and failed) to recreate the park for RCT3, and now I am happy to release this version in Planet Coaster that has been in the works for about three years.


The year is 1952, and Coney Island is at the height of its fame. Basically just a few square blocks on the south end of Brooklyn facing Long Island Sound, there are about 16 square blocks of shops, stores, apartment buildings and cheap hotels in the area, as well as dozens of vacant lots with rented carnival type rides on them. Many storefronts are converted into dark rides, mazes, side shows, and other attractions, (anything to separate a sucker from his money!). There are a couple of small enclosed parks, including Astroland and McCulloughs Kiddie park, as well as the four previously mentioned coasters.

I also need to thank a large number of people for helping, advising, brow beating, and contributing time, effort, and most importantly assets to this project. In no particular order I would like to thank Mr. Orange for his beautiful Blue Heaven Ferris wheel, Masked Bandit for his Boardwalk Bumps and Uthris restaurant, Fisherman for his various Vendor carts, kiddie rides, and game booths as well as his prizes, Bulletthead for his flophouse hotel and Victorian Auto station, and especially for fixing my disaster of a recreation of the Tornado Bobs, DeLadySigner for her mini golf setup, BeyondDrewTV for his Tiki Hut, JPAlmighT for his cute little Tickler ride, ajc9892 for his Cyclone roller coaster, that I have tweaked and created the scenery for, and Wabigbear for contributing a number of structures to the project, including Ruby’s Oyster House, the huge Side Show attraction, the Hardware store next store, and Childs Restaurant, as well as being my tester and advisor since day one. I have also utilized various TMTK and blueprints off the workshop, too many to name. If I have forgotten anyone, I sincerely apologize!

You will need the base game and all the packs. Hopefully, you'll find a cute surprise or two around the area!

The bench contains about 140 buildings or facades, but no interiors. Even the dark rides do not have them. Sorry, but my computer is just about maxed out now. There are also about 120 billboards used in the park. They are available here;

Again, thank you to everyone who offered comments during the build, offered advice, and especially to those who contributed their time and talent to the park. Enjoy your trip to Coney Island! 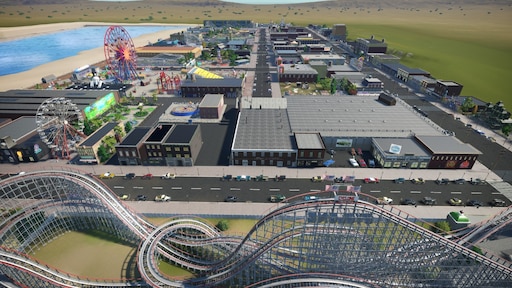