The tritium POIs are all pulled from the Tritium Pathway Network, and will need to be submitted there.

Orvidius said:
The tritium POIs are all pulled from the Tritium Pathway Network, and will need to be submitted there.
Click to expand...

Sorry, I must apologize. I wrote a quick answer, but it would be useful to elaborate here.

It used to be that I pulled 100% of my data from EDSM, and so I would always have the IDs. But that's not completely the case anymore. Since about May, I've been getting the bulk of the data through EDDN in real time. I still pull the EDSM dumps to fill in anything I might have missed, and to add those IDs. But there are a few reasons why I might not have those keys. First, processing the EDSM dumps means that some of that may be a few days behind, in which case I don't have the IDs yet.

Additionally, anything that was sent over EDDN during EDSM's server migration in the middle of January might not be in EDSM at all. During that time I also pulled some data from Spansh and EDDB to see if they had anything I didn't, and there was some. I think some of that included bodies that weren't in EDSM for some reason. When I looked at a few cases, they happened to come in during EDSM's downtime. Others are older but probably came over through my Spansh and EDDB pulls.

And finally, EDSM now also purges some of its older data that is associated with commanders who haven't logged into the website for a long time, and no one else has visited those systems. In that latter case I'd probably still have the IDs, but EDSM would then report that the body doesn't exist. However if those bodies came from Spansh or EDDB, I won't have the IDs, and can't make the link in the first place.

EDIT: Something I'm considering doing is using the EDSM API to query these systems. I might be able to retrieve the IDs and fill them in.
Last edited: Feb 15, 2021

Orvidius said:
Something I'm considering doing is using the EDSM API to query these systems. I might be able to retrieve the IDs and fill them in.
Click to expand...

I've made a first pass at this. I'm still improving the process, but I have it trying to look these up now. It's filled in a lot of the links already.

E
Fantastic. Thank you for your response and your dedication to not just the generation but also the updating of these tools for the Elite community.

I'm doing lots of exploring and recording my findings on a github text file. Feel free to check them out and use them in case you needed guinea pigs to test out changes to your tools. Check out the repository here: https://github.com/elev8rmusic/Cubes

C
I'm not very familiar with how EDSM assign a star type - it is more complex then what game provides in built-in filter (which I'm aiming to match to make things simple). I hope that I can just take latter in most cases... (as i did below).

So, grouping by more high level star types, that's what i get (only showing star types with at least 1000 ELWs, ordering by ELWs per System ratio):

And a minor graph with total number of ELWs (same ordering): 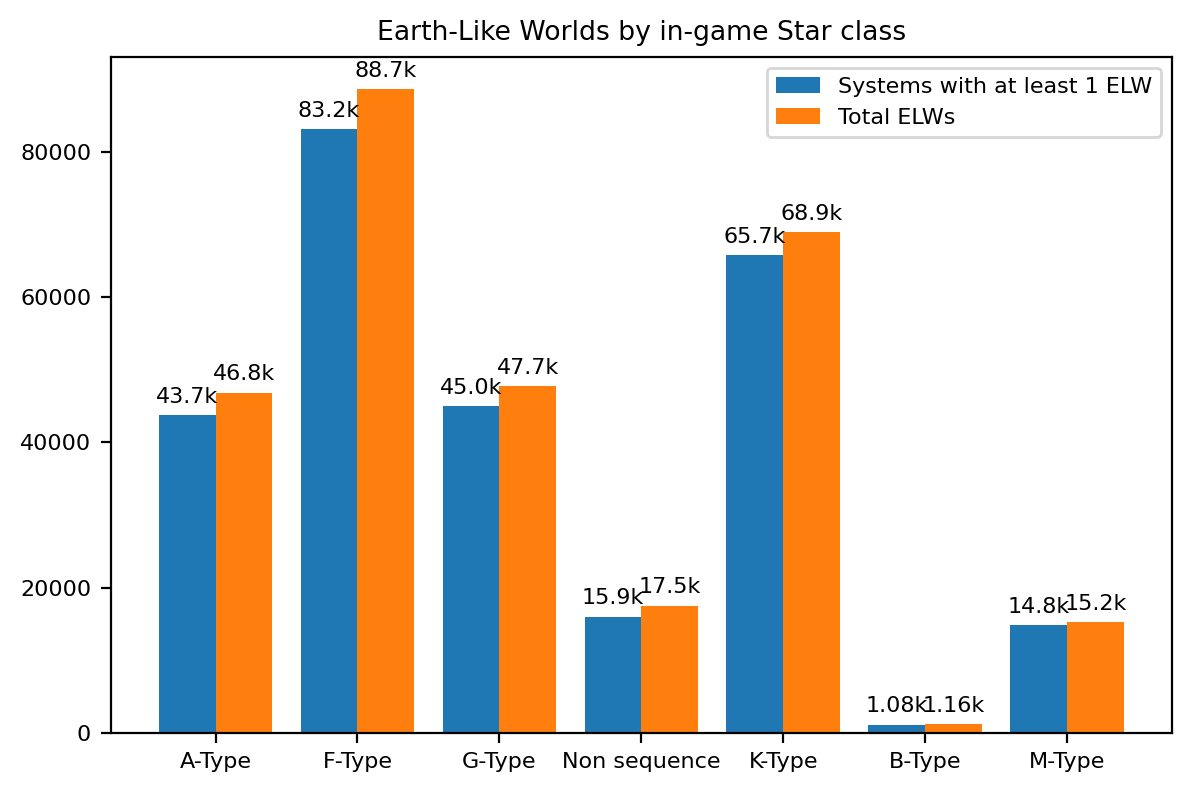 But there's 1 thing that is not OK: in my data the ratio of ELWs per system is much lower than what we see here: https://edastro.com/mapcharts/systemstarplanets.png
Probably, it's becase number of systems for each star type in DB stats file ( https://edastro.com/mapcharts/files/database-stats.csv ) is not the number of systems wherestar is primary, but rather a total number of stars recorded. I began work on processing star dumps for extendeding research to other planet types but (lol, i already filtered primary stars from them... could just take number of rows) its WIP and might require some fancy processing of star type naming.

Yes, if you compare against the total collection of stars, your ratios will probably look lower. For my graphs, I try to determine the main star for each system and graph it according to that. All additional stars in the system are ignored for purposes of that graph.

E
Is it possible to add the number of bodies that share the record on you records site?
E.g. I remember that there are dozens of class Y stars with a mass of 0.0078.

Huh, that might be cool. I'll look into it.

Eahlstan said:
Is it possible to add the number of bodies that share the record on you records site?
E.g. I remember that there are dozens of class Y stars with a mass of 0.0078.
Click to expand...

Seconds before I wanted to say:

If you're using SQL I'd do something like this to get the number:

OK, several little things-- I've added ring data to the galactic records. Corrected some issues with how it was pulling EDSM ID Keys, categorization of rings vs belts, and filtering out some bad zeroes, among lots of other little internal improvements.

Also, the ship template list now includes variants for ships with size-5 FSDs, for the "double engineered" FSDs from the CGs.

E
There's something I don't understand.

If you look at earth like worlds.
The highest one overall proc gen is not the highest one in 'as planet' or 'as moon'.
If I had to guess I'd say you check for 'as planet' if it follows 'has letter + number' although planets in solo star systems never have letters.
If that's the case this thing would mostly apply to all of your spreadsheets, but maybe I'm just wrong once again.

No, you're right. I have a bug in the categorization that was requiring the letter(s) for the stars to be present for the "as planet" tag. I'll run a correction.

OK, updated files are up.

A couple of new things:

A spreadsheet for "popular" fleet carrier names. This includes names that have been used at least twice, and is sorted by most popular first. It doesn't look for similar names, only identical matches. So for example, "USS Enterprise", "Enterprise", "U.S.S. Enterprise", and "The Enterprise" will all be shown as separate names.

An image that shows the update history for the last 7 days (seven days from the time of the image update). This is looking at EDDN updates (travel history, basically), as well as "date added" via either EDDN or EDSM. So repeat visits to already-known systems will mostly get included.

Pretty cool stuff. Reminds me of the long-abandoned EDSM traffic report videos, but it's great to see things in more detail.

Orvidius said:
A spreadsheet for "popular" fleet carrier names. This includes names that have been used at least twice, and is sorted by most popular first. It doesn't look for similar names, only identical matches. So for example, "USS Enterprise", "Enterprise", "U.S.S. Enterprise", and "The Enterprise" will all be shown as separate names.
Click to expand...

All the expected sci-fi inspirations in there, very disappointed to see "Fleet Carrier" and "Carrier" both in the top three though. We can do better than that...

What I sometimes wished was a "Time Shift" function.

- select an area (preferably upto max. zoom) and let time pass by to see how each of the available Details changed over the recorded timeframe

Unsure if that's even feasible or if would add excessive overhead to storage to create such an Option.
Still, would be extremely neat to see how certain areas you've maybe explored over a long time changed over that time and formerly empty spaces getting filled with meat with time.

Hmm, I'll put some thought into it. I have the first-added dates for many things, but there are circumstances where those stored dates changed in subsequent updates. Mostly this is OK, such as in the exploration videos currently on the site. It's probably not enough to meaningfully damage the results for looking at a specific area more closely. Videos are a bit "expensive" to make in terms of CPU time on the server, and I'm not sure what would be a good way to have custom selections for it. But I'll put some thought into what could be done. Just know that this might not work out.
You must log in or register to reply here.
Share:
Facebook Twitter Reddit WhatsApp Email Share Link
Top Bottom