Long shot! I've played PS4 Elite mainly and have muscle memory with Dualshock4 and ThrustMasterHOTAS4 standard ED configs (+my own tweaks). However, I do have a PC account I'd like to get up to speed, yet while PC Hotas / Kbd configs might be much better... is there a repro of any PS4 bindings for PC?

I've got PS4 ThrustMasterHOTAS4 and ThrustMasterTFlightHOTASX hardware incidentally along with the pad.

Simply put, I'm looking for default ED PS4 mapping on PC, preferably for Hotas so I have muscle memory I can expand upon and add PC kbd going forward. I'm just finding none PS4 mapping so far from base - it's as if a different person mapped the defaults for each platform.

C
Im also hoping for Virpil Stck support in the tool! would be awesome!

...and I am hoping for native VIRPIL support in Elite: Dangerous, because:

E
Hi Is there any config for the NXT Gladiators ?

W
I'm in the same boat, looking for VKB Gladiator NXT support (it uses the VKB Kosmosima grip, so i guess it shouldn't be to hard to support the grip at least?)

Is there something i can help with to support the stick? EDRefCard tells me i should supply the reference "skelxs".

EDIT: just saw that EDRefCard has a public GitHub Repo: https://github.com/richardbuckle/EDRefCard
So there actually is something we could help with
Last edited: Jan 31, 2021

W
FYI: i quickly hacked together support for the VKB Gladiator NXT Premium (Left and Right versions) and created a pull request in the EDRefCard repo: 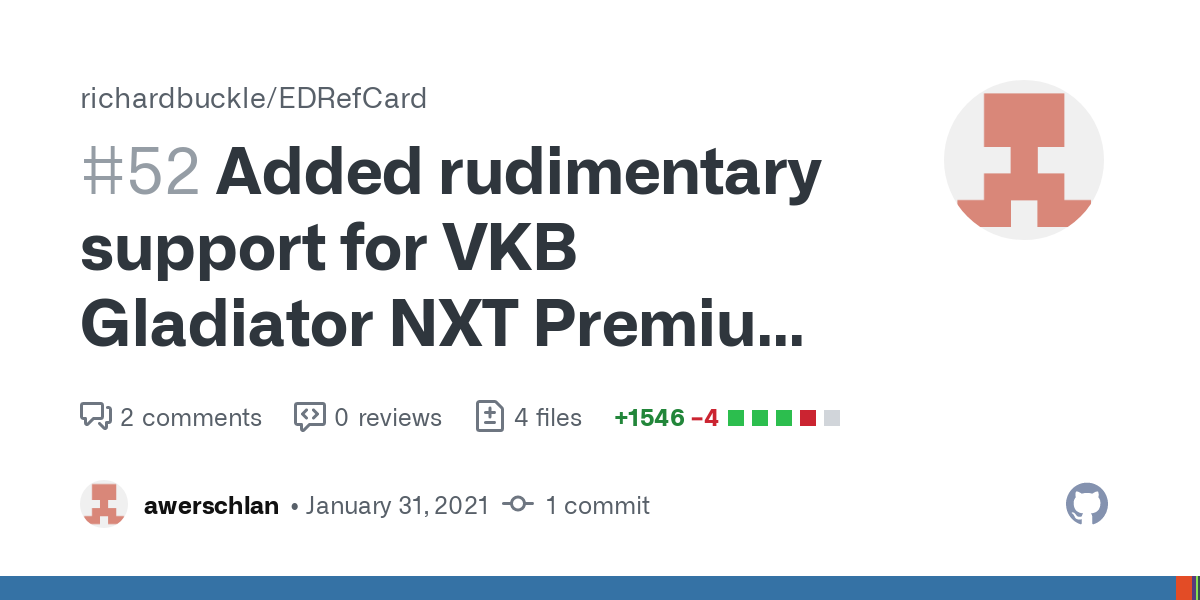 This is not an ideal solution, because the inputs on the joystick base are still missing, but this would be a start to finally support the VKB Gladiator NXT in EDRefCard.

It would be nice if someone would integrate the mappings for the base as well, maybe based on the images available in the joystick-diagrams repo: https://github.com/Rexeh/joystick-diagrams/blob/master/templates/VKB-Sim Gladiator NXT R.svg

For those interested in a quick and dirty solution: you can clone my fork and build & run EDRefCard in a docker container locally, instructions are included in the README.md file: https://github.com/awerschlan/EDRefCard

Thanks for the app - just letting you know I'm a Thrustmaster Airbus TCA Sidestick Edition (http://www.thrustmaster.com/products/tca-sidestick-airbus-edition) user (joystick only), and when I do edrefcard it asked me to notify of an unknown device " pebivw".

There is a wireframe schematic available on page 2 of the User Manual at https://support.thrustmaster.com/en/product/tca-sidestick-airbus-edition-en/ if it helps

If you have the time/inclination to add the joystick to the edrefcard, that would be great thank you.

I' m using a Trustmaster T.Flight Hotas One and EDRefCard told me to report here and supply the reference "amienz"

https://ts.thrustmaster.com/download/pictures/PCMAC/TFHOne/TFHOne_EDOne_LAYOUTv2.png is the user's manual preset. It says its for X-box but i'm using it in a PC.

I've just gone back to this edrefcard thing for the first time in ages, and would like to say thank you so so so very much for keeping on updating it. I know it's still being worked on as when I first got my kosmosima's about a year ago they weren't supported, but tonight I see they are correctly read and rendered by this wonderful tool.

L
I am using dual Thustmaster T16000s, and the way Elite maps the butting in the binds files is causing them to be mixed up. Short of creating a separate bind file for each joystick to import, is there a way to put the binds on the right joysticks?

Great tool nonetheless, and if I have to I will make the separate bind files.

I' m using a Trustmaster T.Flight Hotas One and EDRefCard told me to report here and supply the reference "amienz"

https://ts.thrustmaster.com/download/pictures/PCMAC/TFHOne/TFHOne_EDOne_LAYOUTv2.png is the user's manual preset. It says its for X-box but i'm using it in a PC.


I too would like to add a request for the Thrustmaster T.Flight Hotas one and my reference is "etsulr" .

Hello!
I am using the following VIRPIL controllers, and the reference from the site is: "ehdfkt"
Thank you!

Edit: Forgot to mention that the due to ED not supporting controllers with more than 32 buttons the Throttle is put in a keyboard simulating mode, which maps all buttons from 33 to 79 as a keyboard keys.
Last edited: Feb 21, 2021

Okay now this thing is awsome.

I
Hello. I have a TM16000 duo and can't seem to get it recognized by edrefcard. I looked in the bindings file and it says thrustmasterswarthog something. I think it saw my pedals. what is the correct nomenclature for the TM16000 duo that I can put in a bindings file so its recognized. I have tried T16000M, T16000M and some others. I can't seem to find anything with Google. Any help appreciated.
Last edited: Feb 25, 2021

I created two PDF-sheets with the bindings i made so far.
Maybe it could some help for someone, using the same setup.

V
I am a little confused how to use the public config list.

For example, I currently run a Logitech 3D alongside a T16000m FCS throttle because the T16000m FCS Joystick broke, so I replaced the stick but not the throttle.

Now, when I click a link that matches my current config, it open up a new page with an image instead of downloading. Also, the image shown does not match my configuration. For that matter I looked at some of the other custom combos, but most of the images show only one of the two devices, or one of the devices is mismatched.

I am unsure what I am doing wrong.

EDIT: It also always says at the top that an "Unknown controller has been detected" and that my "device is not supported at this time". This confuses me even more as both my devices work in the game and are supported.
Last edited: Mar 4, 2021

@Loopwark i think that for VPC they need to add mechanism to also upload your devices profiles in order for this to work. With the Virpil software you can customize the buttons in a ways which are not possible with other controllers, so i think they will need to do this in order for the EDRefCard to match the virtual to the physical button mappings. I think this is the only way to know which binding goes where on these controllers.
In addition to this there should be a checkbox for the built-in keyboard mapping which bypasses the ED 32 buttons per controller limit, as this will change the output in the bindings file.
I really hope that at some point Virpil Controllers will be supported by EDRefCard.

V
I think I understand now... I click the middle link and it opens a text file. Then I need to copy and paste the text file into a notepad, and drop it into the bindings folder? Is this correct?
Last edited: Mar 4, 2021

T
this may be a long shot...
out of all the configurations, I only managed to find one link for Logitech 3d extreme + Logitech attack 3