If you haven't seen the Elite Dangerous: Odyssey Gameplay reveal trailer then go check it out here! If you have and want to know more about the heads-up display, we have you covered.

Below we have broken down the different HUD elements that will appear in Elite Dangerous: Odyssey, along with a couple of questions and answers for you! 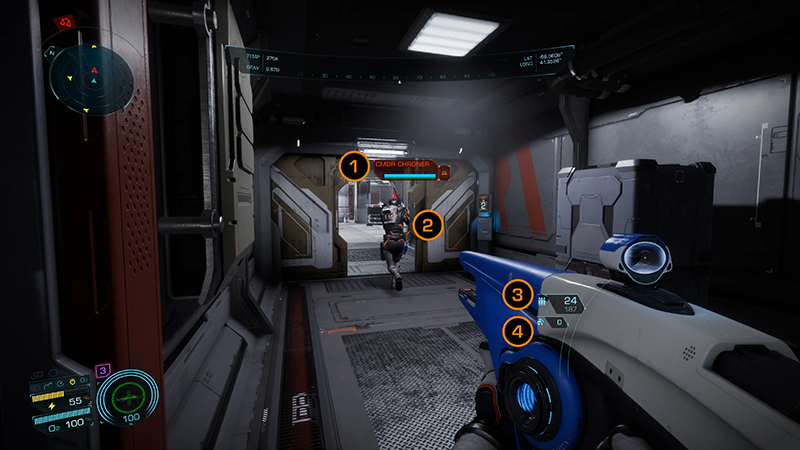 1. Character Information - Displays other characters':
2. Weapon Reticule - This is used for aiming when the player is not aiming down a weapon/tool's sight.

3. Ammunition- Shows the remaining ammunition in the magazine and the ammunition reserves for the equipped weapon.

4. Grenade - Shows the currently equipped grenade type and the remaining number of grenades. 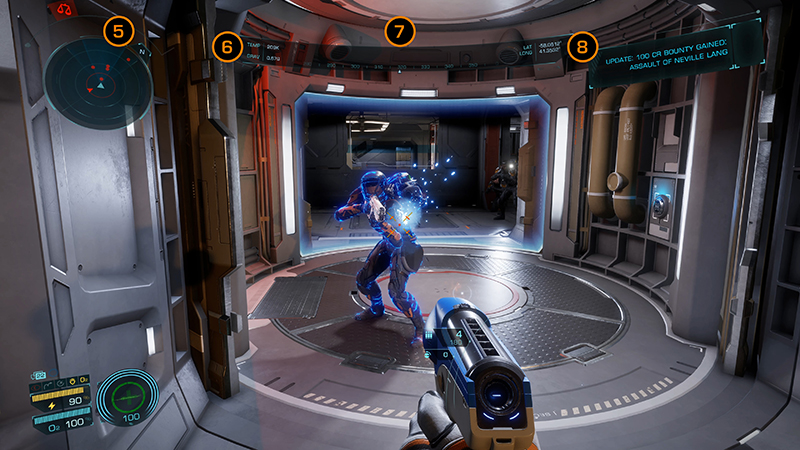 8. Player Coordinates - The precise location of the player on the planet's surface. 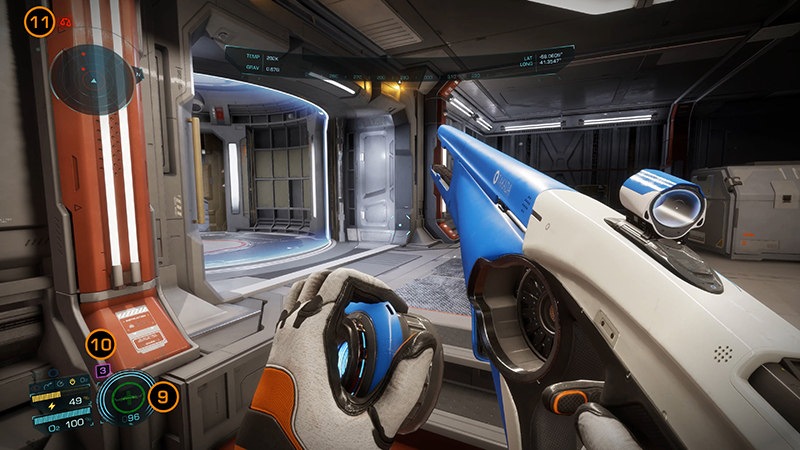 10. Authority Level - The level of access to settlement facilities that the player currently has.

11. Active Player Bounty - This shows that the player has an active bounty on them in their current location. 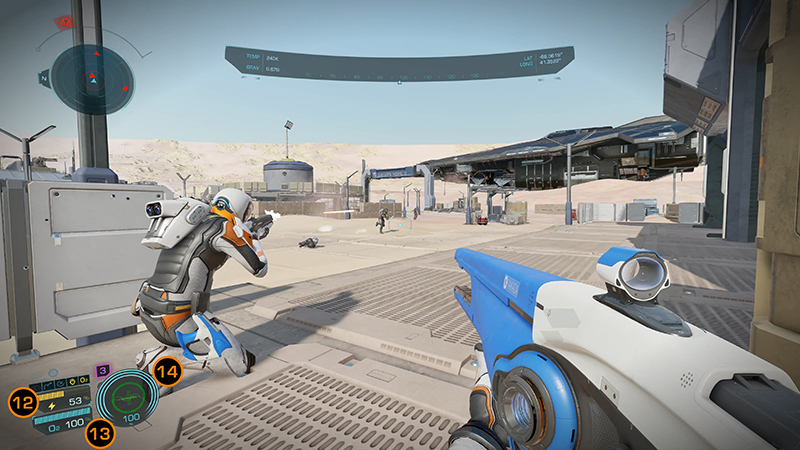 12. Suit Power - Shows current capacity and level of suit power charge. This also has icons that show the suit functions which are causing power drain.


When will Odyssey Release?
Elite Dangerous: Odyssey will release in Early 2021.

What platforms will Odyssey be available on at launch?
PC, PS4, and Xbox One

Why can’t I pre-order on console?
Pre-order is only available on PC right now, keep following our channels for further announcements.

I’m a lifetime expansion pass holder – will I receive Odyssey free of any additional charge?
Yes.

When will the Alpha run for Odyssey?
We’ll be announcing more detail on this in due course so keep an eye on our channels for further announcements.

Will Odyssey be coming to PS5 and the Xbox Series consoles?
We don’t have anything to share on this right now, however, we can confirm that the PS4 and Xbox One versions of Odyssey are playable on next-gen consoles via backwards compatibility.

Can I play Odyssey in VR?
Odyssey will be compatible with VR and you’ll be able to enjoy the same fully-featured cockpit experience players have enjoyed in Elite Dangerous so far. When leaving the cockpit of your ship or SRV, VR players will see a projected screen on which they can continue their journey without removing their helmets. They may also remove their helmet if they choose. VR is only compatible with Elite Dangerous on PC.

What does the exclusive Pioneer suit skin in the Deluxe Alpha Expansion Pack look like?
We don’t have any imagery to share of this skin just yet but we’ll be sharing this very soon.

How many tracks/How long is the Odyssey soundtrack?
Full details of the soundtrack are yet to be announced, keep an eye on our channels for further announcements.


Want to get your hands on Elite Dangerous: Odyssey as soon as it's available? Pre-order now on PC here
Last edited: Dec 11, 2020

That's a really nice detailed view and description of the HUD elements. Thanks a lot for that Paul

Paul_Crowther said:
Why can’t I pre-order on console?
Pre-order is only available on PC right now, keep following our channels for further announcements.
Click to expand...

Can I just DM you my bank details now, and you can just take the money off me whenever you’re ready?

L
this looks great, amazing work!! but can you now please fix the huge serverside problems & errors that still happen, instead of focussing on letting us buy more of your broken stuff? ive literally have my friend pay for this game for me, but if I cannot log into my newly set up account that actually hosts my game, how should I use it, let alone play it?!

Volunteer Moderator
A
Excellent. Thanks guys!

S
This update looks fantastic, it's bringing me back to Elite Dangerous. Looking forward to it

I’m on my phone browser so I’m not sure I can see clearly enough on the images, but perhaps it’s related to your rank? Combat rank? Feet rank? As you can see I know about as much as you do about it...

Looks great! Can't wait to see more details later this month. Hopefully we can get our hands on the alpha before year's end.

R
Thanks for the information FDev's ,
Looks great really looking forward into the expansion will bring to the Elite Game

This creature is clearly not to blame for Odyssey.... It's actually rather good...

Achtung-Goomba said:
I’m on my phone browser so I’m not sure I can see clearly enough on the images, but perhaps it’s related to your rank? Combat rank? Feet rank? As you can see I know about as much as you do about it...
Click to expand...

It seems to be different than rank, since both rank and level seem to be displayed. Now there are a couple of options what this could mean. Maybe it's just for NPCs (although why not use rank as before?) or maybe since everyone's Elite by now, we will be able to get from Lvl 1 Elite to Lvl 100 Elite.
You must log in or register to reply here.
Share:
Facebook Twitter Reddit WhatsApp Email Share Link
Top Bottom