Thank you all for your comments and feedback on the recent announcement regarding Odyssey and Horizons compatibility. We understand that the post left some aspects unclear which we'd like to address below. We've also included some additional details.

To clarify the circumstances under which instances may be shared across versions of the game, and when visual changes will be seen, we've made the following tables. The first applies to the time between PC and console launch, and the other to the time following console launch:

From PC Launch to Console Launch​ 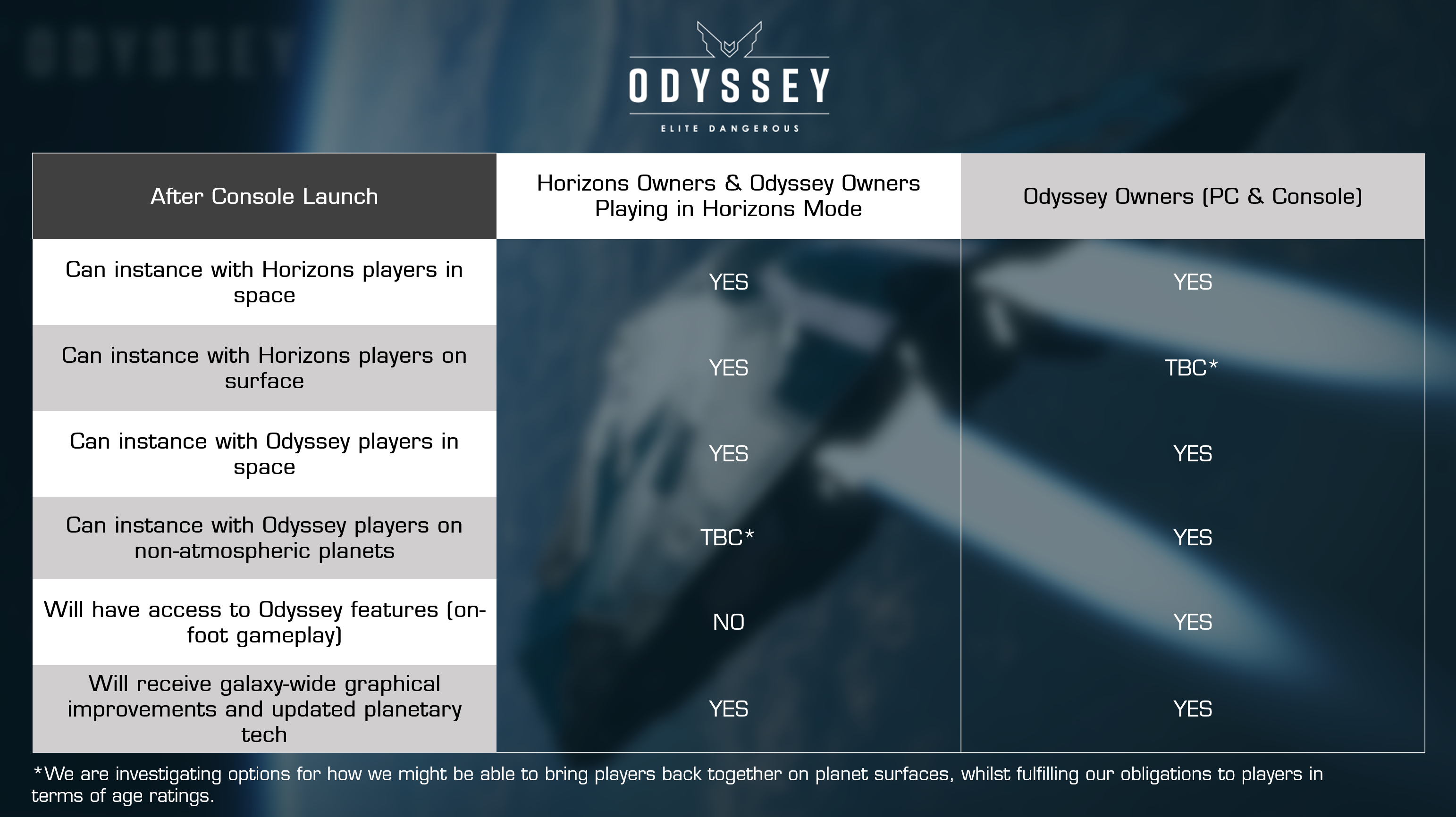 Landing on planets with tenuous atmospheres is ONLY available to Odyssey owners.


Other Aspects of Horizons and Odyssey​

Switching From Odyssey to Horizons Mode

Under some circumstances, your Commander location will need to be reset. For example, if you try to load into the game from the main menu in Horizons mode after playing Odyssey and meeting the following conditions:

In these cases, your Commander will be placed into your most recently used ship and, if necessary, position it in orbit around the stellar body it was landed on, or docked on a settlement on. As with Horizons, the reset option will not available to you if your ship was destroyed at the time you logged out. Instead, a message encouraging you to re-access Elite through the Odyssey client will appear.

In addition, due to the terrain changes in Odyssey, the following will happen when switching over while landed on a planet without an atmosphere:

Thank you for your feedback and patience as we navigate through the huge transition for Elite Dangerous marked by Odyssey. We hope this follow up has gone some way to clarifying the details raised after the initial announcement. If you have any further queries, please leave them in the replies.

Thanks for the clarification Bruce.

Check out the Fleet Carrier Owners Club community on Discord - hang out with 11,284 other members and enjoy free voice and text chat.

I think I'll just stick with, and stay in, Odyssey!

Ed [FCOC] said:
Thanks for the clarification Bruce.

Check out the Fleet Carrier Owners Club community on Discord - hang out with 11,284 other members and enjoy free voice and text chat.

You're welcome. Although this is from the whole team (development and community), of course.

Thanks for the clarification Bruce and Frontier. Currently I don't see a reason to leave Odyssey.

Can you put some folks mind to rest over Odyssey release PC specifications, there is some concern being expressed by others.,

Thank you for the clarification Bruce and the team. I asked during the last thread but don't see the answer here. We were previously told that Horizons players on PC would be seeing the graphical updates, why was the decision made to change this?

Also something that I've seen wondered quite a bit, is will Horizons players get the UI changes?

Does this really mean you are resetting all bounties for Odyssey players when it releases?

Is "space" defined as Super Cruise and normal Cruise?

aka.. I get interdicted.. I drop into normal space or smash myself into a planet.. And thus avoid the interdictor?

Thank you to @Bruce G and Frontier for clarifying. As said before, I see no reason to ever log out of Odyssey once I am in and will encourage my friends to do the same (gifting them Odyssey if they need it )

MX Shadowlord said:
we wait with trepidation for Odissey on console and next gen patch if you want
Click to expand...

for now we don't know anything about it

M
Thank you for the clarifacation the information and transparency means a lot ; D
A picture tells a thousand words and being thorough covers nearly all bases.

The only question that reminds is does Horizons get new UI improvements.
Not that it matters to me I'll be playing Odyssey 99% of the time

Bruce G said:
Missions will not transfer between Horizons and Odyssey, and their timers will count down as if you were not logged into the game when you are on the other version.
Click to expand...

So if you have cargo from a delivery mission onboard your ship and you switch game version the cargo gets marked as stolen? If so, if you switch back does it get marked as unstolen or does the mission fall down? Or do you just have a load of cargo you can't hand in on the wrong version?

MX Shadowlord said:
for now we don't know anything about it
Click to expand...

Ahh that's what I thought.