Found this by pure accident, thinking that I'd just stumbled upon something awesome in the Formidine Rift, which I've visited just to get my EAFOTS badge on EDSM. First I found an AA-A H system with nothing but a class L dwarf and a gas giant in it... That was strange enough, but it was in that weird system where I saw something in the sky I hadn't seen yet. A pale star with a relatively large halo around it.

Anyway, I've just been flying towards that pale (later not so pale anymore) dot in the sky, only to identify my target as IC-2149 or BD+46 1067. Of course, like most awesome things, it's already been discovered...

Its display on the map shows a few glitches, but yeah... (Click to enlarge)
​
I know it's reachable, and I'm about 700Ly away now, having already travelled about 1600 or so lightyears towards it. But damn, it's seriously hard from here on out. Does anyone know of a route I can take without too many FSD injections? I'm down to 9 × +100% injections by now, or 13 × +50% ones. Base range of my ship is around 57Ly. Automatic routing simply fails.

Is this even impossible with my ship and materials available?

Helps if you say where you are....

Of course, my apologies.

Interesting! Where you currently are doesn't seem to matter, I see the same and I'm currently here:

Here is how it looks to me:

That's quite an obscure area, I don't have your start system in my database. if you can get to Myeadai KW-U d3-0 (should be close) then you could try:

Not sure if that fits with your jumponium limits, you can always get more

GrandAdmiralThrawn said:
First I found an AA-A H system with nothing but a class L dwarf and a gas giant in it
Click to expand...

That's not strange at all. AA-A h systems in the '1000 light years no special stars' exclusion zone (as seen here: edastro.com/mapcharts/neutrons.png) tend to be dwarf stars, mostly T-Tauri as far as I've been to those exlusion systems.
Last edited: Aug 4, 2019

@picommander: Let's see who can get there first.

@Factabulous: Thanks a lot! It's a bit too late for me today (~10pm here), but I'll try your route tomorrow!

GrandAdmiralThrawn said:
@Factabulous: Thanks a lot! It's a bit too late for me today (~10pm here), but I'll try your route tomorrow!
Click to expand...

GrandAdmiralThrawn said:
@picommander: Let's see who can get there first.
Click to expand...

I have to pass, sorry. My main goal Xibalba isn't reached yet (though just ~50 jumps to go) and then there's some delicate real life relocation of my mom ahead, including a whole bunch of formalities...

Hope you'll report what you'll find there!
EDIT:
wasn't clear from my screenshots but I'm 20,8KLY away from this spot (BD+46 1067). Just saying..
EDIT 2:
BD+46 1067 is marked as an O-type star, but I've never seen such a huge halo around an O-type. If that's not just another glitch, it could be indeed something very new in horizons, like a supernova perhaps?
I also still wonder what IC-2149 stands for. When I type it into the router from my current position it seems unknown. But when I'm already focused on BD+46 1067 and zoom out a little bit, the link to IC-2149 seems to work now.
Last edited: Aug 4, 2019

I'll make sure I'll pick my route carefully and/or restock my materials accordingly. I haven't been flying for four months just to get stranded here (hopefully, heh).

@picommander: Ah, ok. So you meant just the map, I thought you could see the system directly. I mean, I could from nearly 2000Ly away, but 20k is a bit too much for a direct visual confirmation I guess.

Has nobody mentioned that system on the forums before? EDSM mentions it in detail, but I can't find anything else besides that (other than real life information about it).

@GrandAdmiralThrawn , I'm about 7k ly away from the bubble in the opposite direction at the moment, and I'd like to see what you encounter when you get there. Do keep us posted!

Don't expect too much though. Meanwhile I believe it's just an O-type in the middle of the nebula IC-2149. No supernova or anything extraordinary.
But good luck proving me wrong!

Thanks for the clarification!

I will keep you posted. Just in case CMDR Factabulous' route doesn't work as-is this may take some time though. I'm a bit low on Arsenic and Germanium after all. I mean, I got a mining laser with me, but I'd rather play it safe from the start.

If I can reach it, I'll be the eleventh person to do so. I just wonder why nobody ever talked about this, even if it's not spectacular. I mean, it looks interesting enough, at least on the map.

Alright, I fetched a cold beer (I keep pretending that beer's the reason why I have cargo racks in my DBX btw.), and went to the first system recommended by CMDR Factabulous, which happend to be just 4 jumps from my location.

CMDR Factabulous, I would like to express my thanks for providing me with the right starting point. It seems your route would work perfectly too, from what I can see, and it's likely much shorter than the one I took. But I decided to tune it for minimal material consumption. After a bit of trying things out I managed to get there and back spending only a single standard FSD injection. The rest can be handled by two Neutron stars in the vicinity. One for getting there and another one for getting back out.

I can't provide you with my exact route for now, as that would require some digging in my log files, but most of it can be handled with the routing of the galaxy map.

Just go to the second system listed by Factabulous, Myeadai MI-Q d6-1. BD+46 1067 should be easily reachable by using standard galmap routing from there, without any FSD injections. Go there, and from there just plot a route to the target including Neutron boosts. If you've got at least 57Ly base jump range like me, that should already do the trick.

This is what the target system looks like when viewed from one of the first systems recommended by CMDR Factabulous: 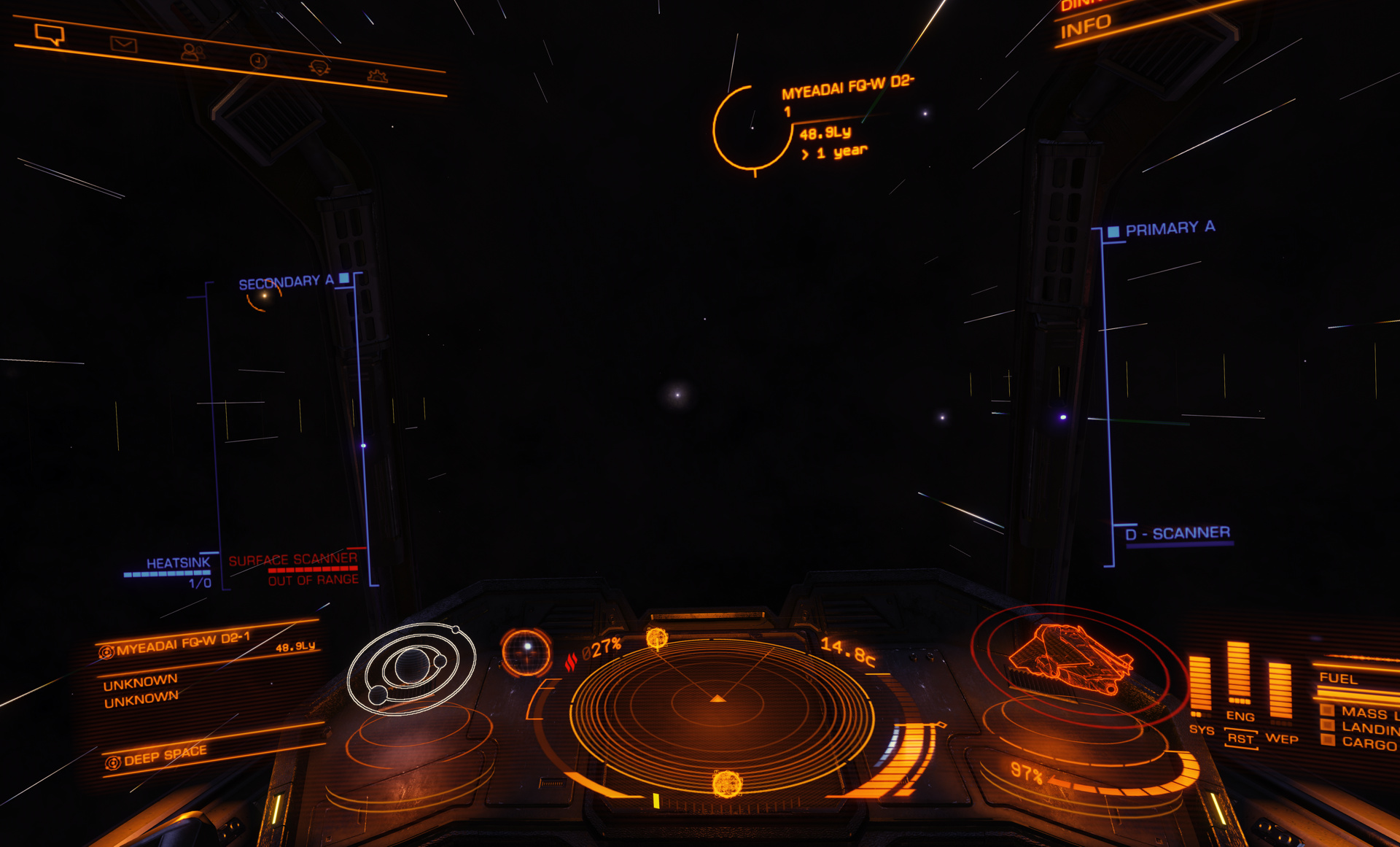 While I needed to do many more jumps trying not to spend too many resources, I came across a planet with Germanium. Since this is the resource I was most short of, I picked some up on my way: 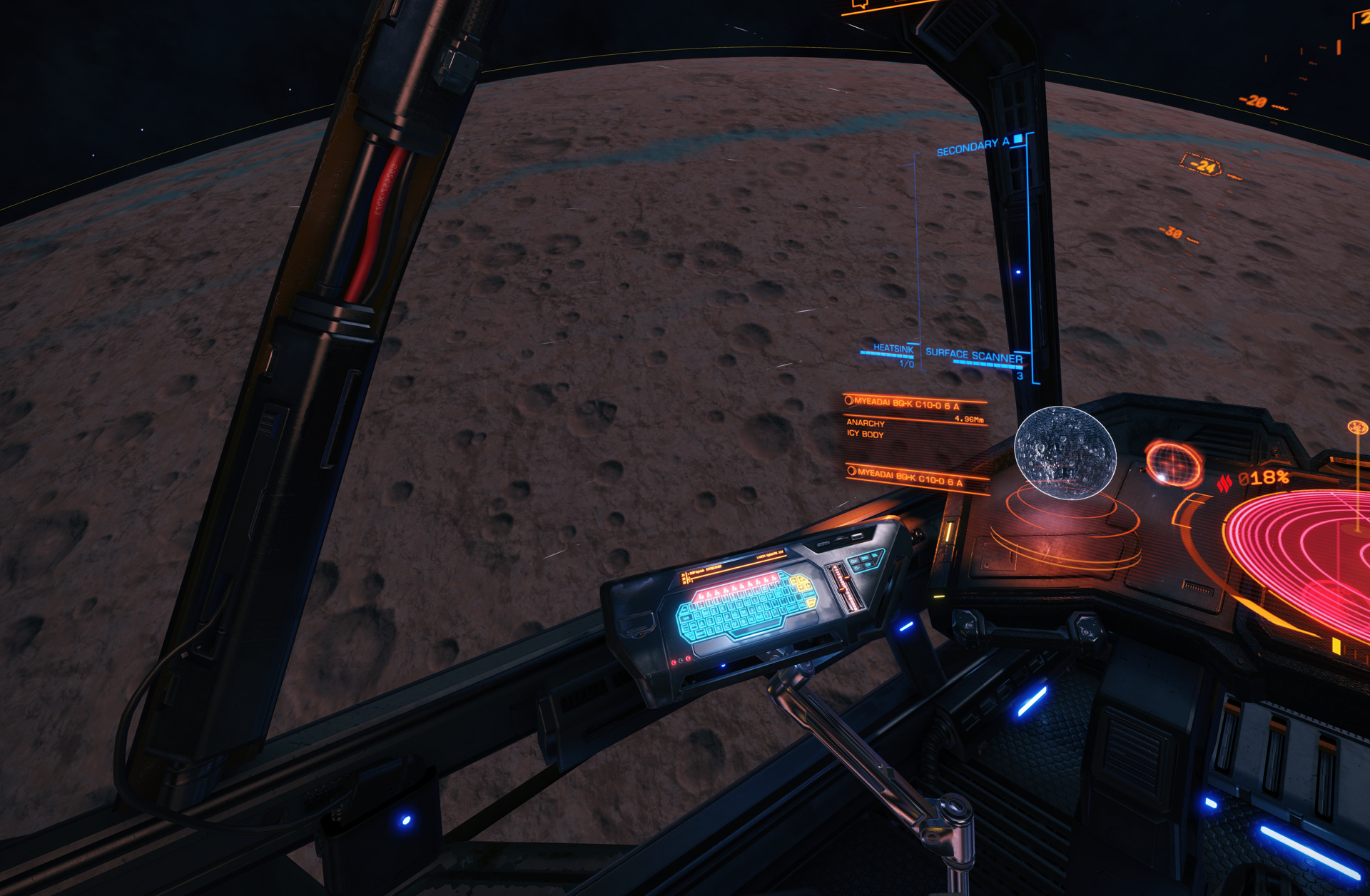 (That was one horribly boring chunk of ice though...)

After a few more jumps, I came across a star type I had actually not discovered yet! A class DAZ white dwarf. I'd love to show you a screenshot of it, just because. Unfortunately, ED messed it up, and I got the "blocky graphics" bug on it, so yeah. It was quite interesting that that DAZ wasn't discovered yet, as it's very close to the Neutron I used for jumping to BD+46 1067. Awesome, now only DBZ and DQ are missing for me.

After having arrived at that Neutron star system it's a 198Ly jump with boost: 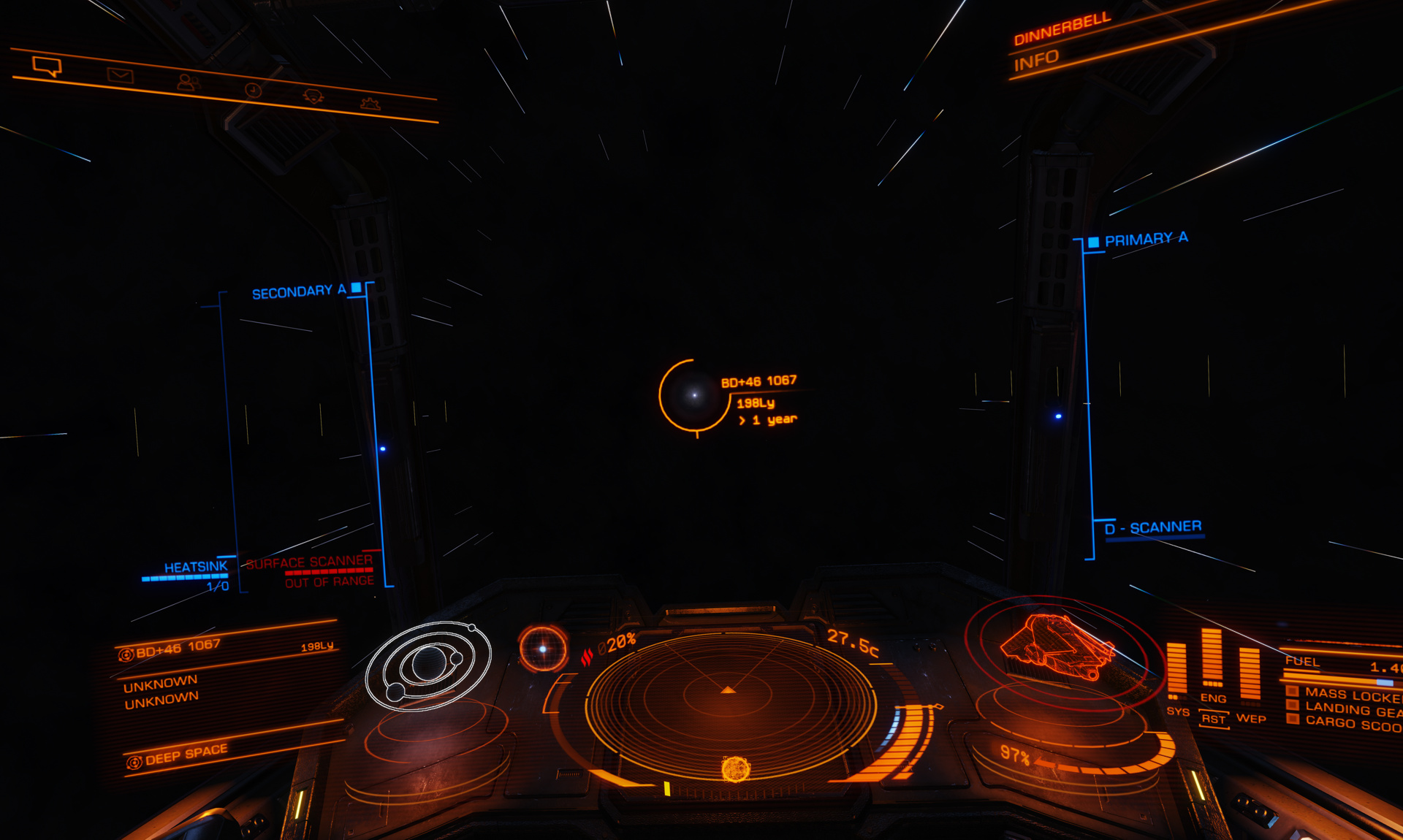 "Close" (A processed screenshot again - made the target system appear a bit brighter once more)!

Feels a bit scary to jump into that system from a Neutron, but you can feel safe, it's pretty easy to get back out as long as you've got at least 74Ly of range left in your ship including "Jumponium".

And now, as for how it looks like inside...

I assume some of you have already seen something like this, but for me, this was my first planetary nebula. I've seen quite a few supanova remnant nebulae before, but this one was a first for me. And this turned out to be far more interesting!

Here, have a look: 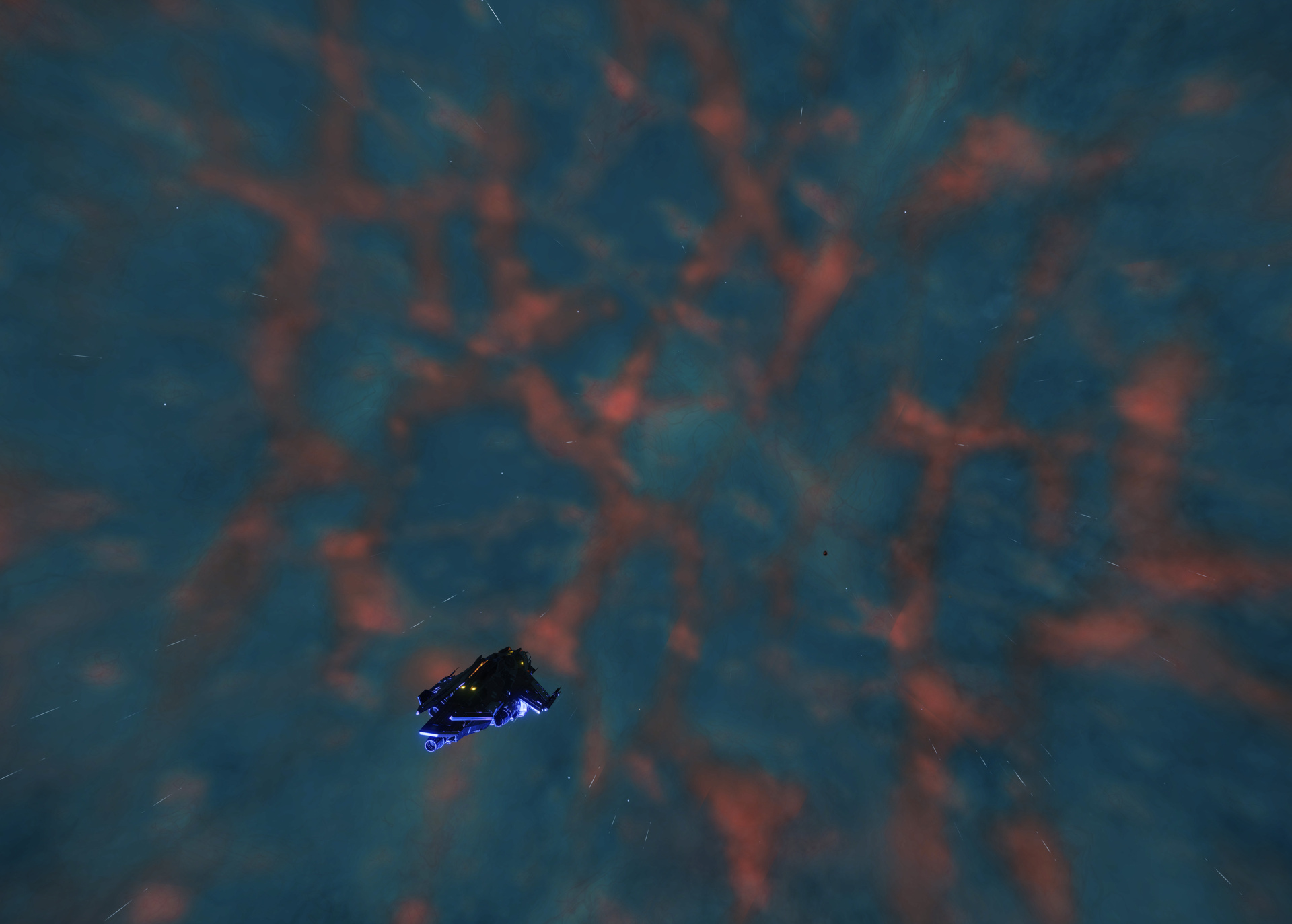 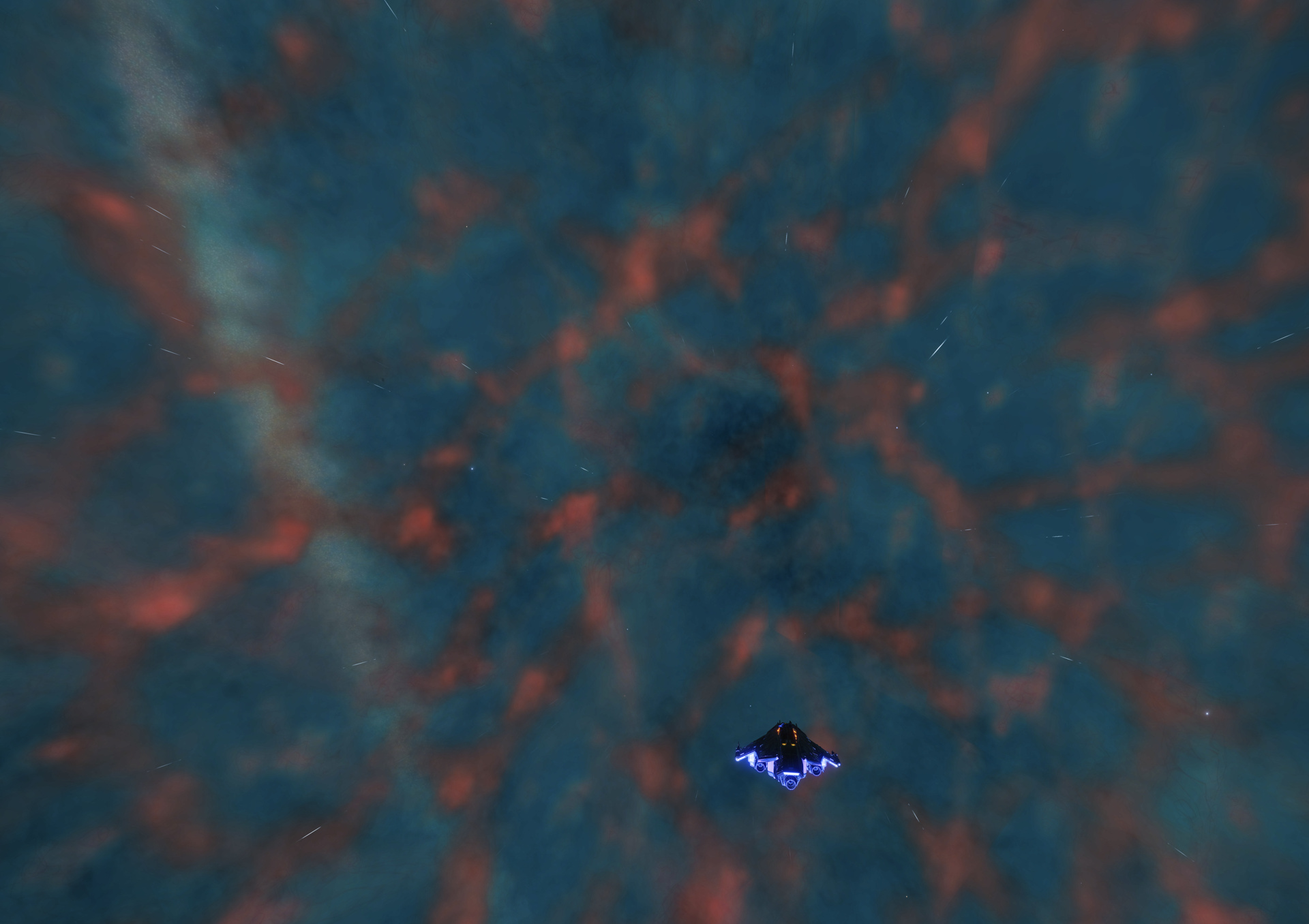 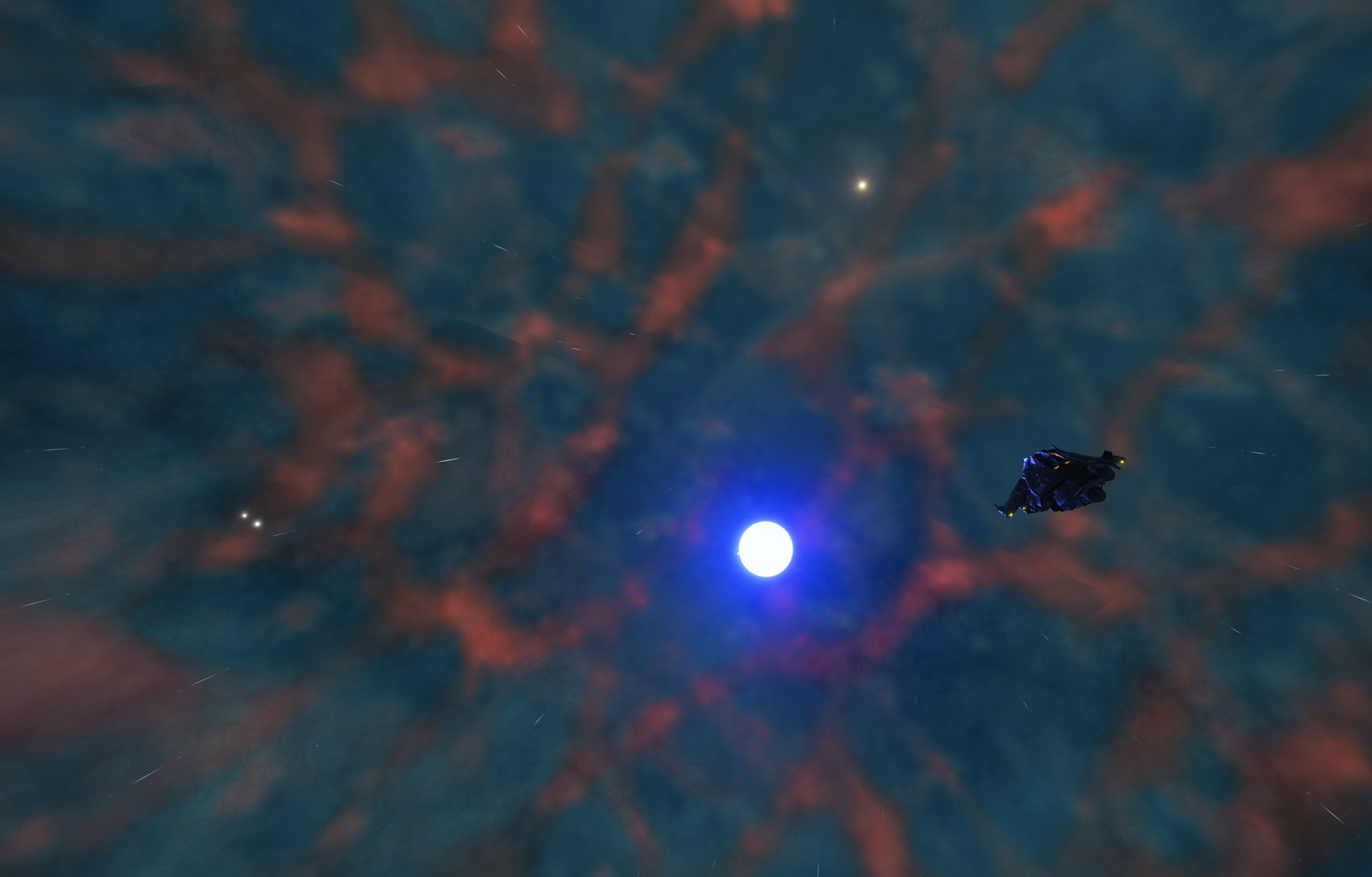 As a VR user, I would say the whole nebula feels "smaller" than a supernova remnant ones. Maybe that's just my imagination, but that's what it felt like. Anyway, I really enjoyed visiting BD+46 1067 and its IC-2149 nebula, as this was something I hadn't seen before.

Thank you very much for helping me get there!

Left quite a few breadcrumbs along the way. 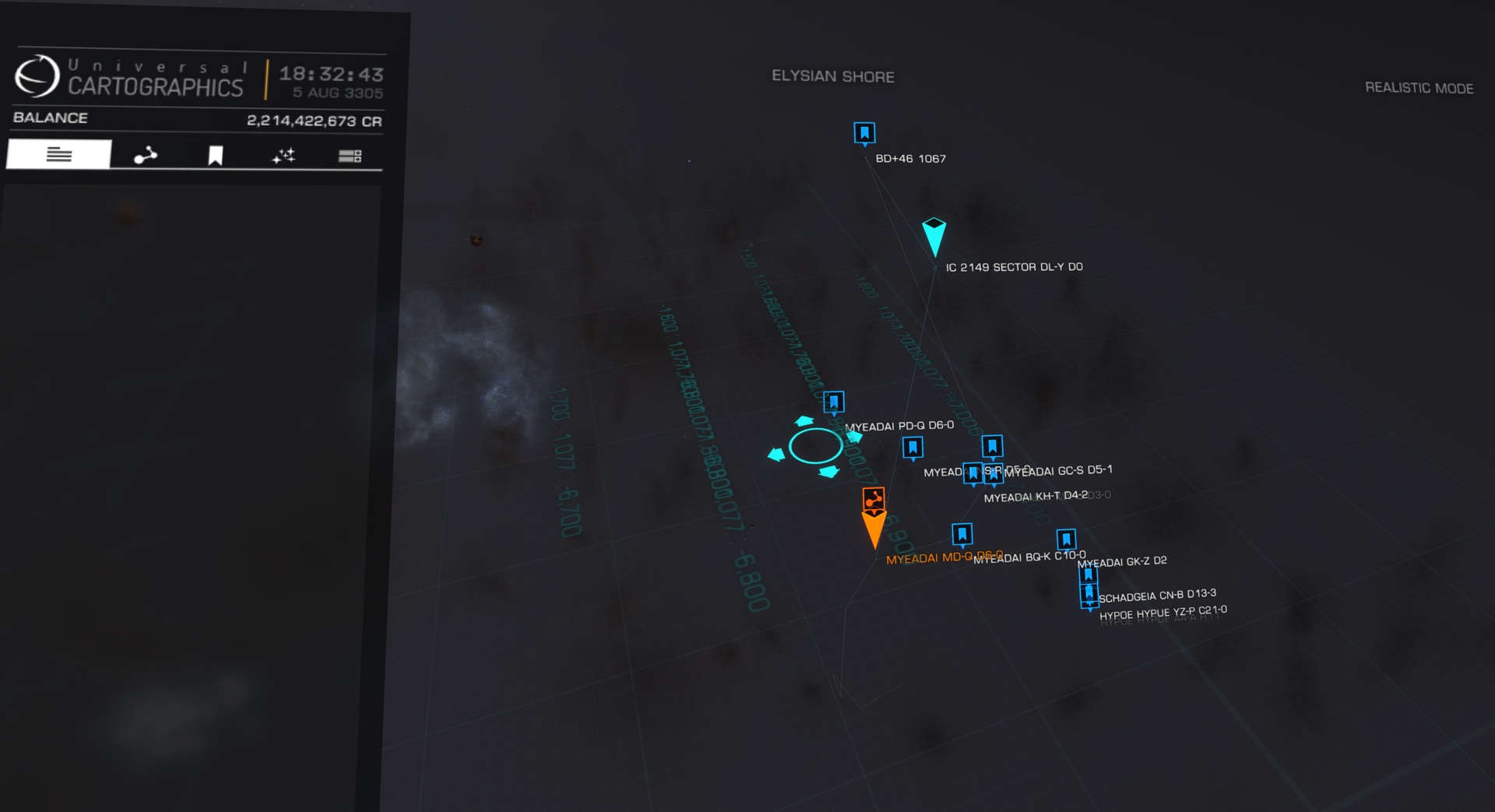 PS.: This was the first time I wasn't even slightly annoyed or disappointed that the target system and some other systems on my way there were already discovered. But well, I found an undiscovered terraformable water world, two undiscovered Ammonia worlds and my DAZ star on my way up there. Plus that gorgeous planetary nebula! Plenty of things to be pleased with!

GrandAdmiralThrawn said:
CMDR Factabulous, I would like to express my thanks for providing me with the right starting point.
Click to expand...

I both love and hate these threads for what they do to me... lol... I had to go brush up on Dijkstra's algorithm and toy around with it.

Or, without neutron supercharging:

Orvidius said:
I both love and hate these threads for what they do to me... lol... I had to go brush up on Dijkstra's algorithm and toy around with it.
Click to expand...

Heehee, we covered that one in profession school (software developer)

Oh, and going back to the original starting point, without neutrons: